Four of the most exciting artists from Southeast Asia have teamed up for a trilingual song inspired by Walt Disney Animation Studios' latest feature film, Raya and The Last Dragon.

Titled 'Trust Again', the number revolves around the film's central themes of trust and friendship and is based on the story of the titular Southeast Asian warrior, who is voiced by Star Wars: The Last Jedi and Star Wars: The Rise of Skywalker star Kelly Marie Tran). 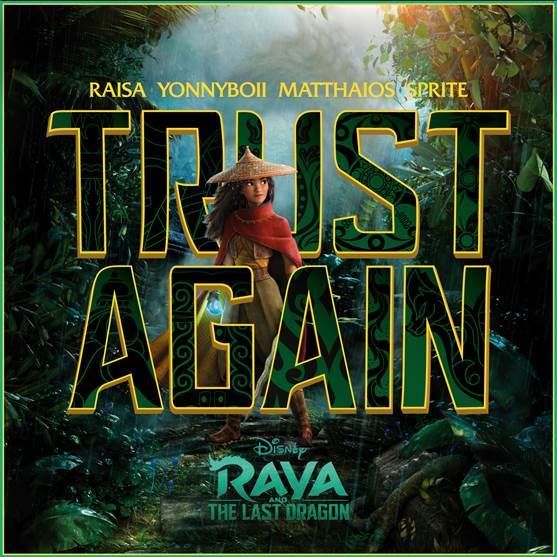 The groundbreaking project — which has not been attempted before in Southeast Asia — features the talent of Indonesian singer-songwriter Raisa Andriana (better known as Raisa), Filipino rapper Matthaios, Malaysian rapper and producer Yonnyboii, and 15-year-old Thai hip-hop sensation SPRITE, who each brings elements unique to his or her own culture to the table.

Matthaios, for instance, makes a reference to the Arnis (an ancient Filipino weapon) in his verse while Yonnyboii and SPRITE integrate the words "nasi lemak" and "tuk-tuk" respectively in their segments.

Additionally, the song fuses the sounds of several instruments unique to Southeast Asia such as the Angklung, the Jaw Harp, and the Seruling, as well as elements from Gamelan, Thai Ensemble, and Ethnic Percussions.

This announcement comes just days after Filipina singer KZ Tandingan was unveiled as a contributor to Raya and The Last Dragon's soundtrack. Her latest work, 'Gabay', is the first-ever Filipino song to be featured in a Disney film.

'Trust Again' will be released on all major streaming platforms on 12 March. Pre-save it here.