Tomorrow, two of the most vital and buzzing young voices in contemporary Filipino music will take the stage in Singapore via Bandwagon Live. One of them is Quezon City’s 18-year-old rapper Shanti Dope and the other, Manila rock band IV of Spades.

Shanti has been on a spellbinding ascent from the get-go: Following the release of his Materyal EP in 2017, he has emerged as bona fide star, locally and beyond, amassing millions of streams and performing throughout Asia, Australia and multiple states in America.

Below, Shanti tells us his story and reflects on his journey so far.

What’s got you excited about your first Singapore show?

The fact that I will be performing not just with one of the best young bands in the Philippines, IV of Spades, but also that we can perform for all the Filipinos in Singapore.

How did you discover hip-hop and what does it mean to you, today?

I discovered hip-hop as a young boy growing up in the outskirts of Manila, in a small working class community. In the neighborhood I grew up in, there was a bunch of kids who enjoyed hip-hop music, tried to copy what we would hear on the radio, and later on, wrote our own raps for friendly battles.

What influenced your choice to rap in Tagalog?

At the start, it was the battle rap scene in the Philippines, which is happening not just in the urban centers but also in the small neighbourhoods, like the one I grew up in. With the Internet, we had access to videos of these battles. But a major influence and inspiration is Gloc-9, who is a rap icon in the Philippines, who writes all his songs and collaborates with other artists. Each song of his is different, and I couldn’t be happier that I am in the same management as him. He’s the one who showed and proved to me that the mainstream is ready for good original Filipino rap songs.

How did 'Sa Kahapon', your collab with IV of Spades come about and what do you think they brought to the table?

This was actually a product of Coke Studio, where artists are put together to collaborate on an original song. I think it was interesting that the steady disco funk music of IV of Spades was combined with the kind of rap that I do, which is very street, very passionate, and sometimes angry.

How’s the rap scene in the Philippines?

I think it’s productive. While there are few mainstream artists, there is a large hip-hop and rap community in the streets and neighborhoods like the one I grew up in. There’s a lot of undiscovered talent.

How did you feel when you met Gloc-9?

Because he was a major part of why I wanted to start writing my own songs, it was a very big deal for me to finally meet him, and do a collaboration with him. And to now be in the same management, he pushes me to do more and be more in my songwriting, which is a good thing.

How’s it like, having someone in the family, your uncle, manage and co-produce for you?

It’s good. Because he’s also someone I look up to, and someone who I know is concerned for me, not just because he co-produces my songs, but because we are relatives. So I trust him when it comes to making sure I’m doing okay.

What do you think of the Asian presence in hip-hop and who are some Asian rappers you look up to?

I think we could do more for Asian rappers, and all rappers who aren’t part of the mainstream. I know a lot of rappers who are unknown, but who do really good work, and that can be said of Asia as well.

Lastly, what are your music plans for the future?

I just want to continue making songs. I can’t really see myself doing anything else with my life at this point, so I’d like to just make more songs and hopefully deliver more hit songs.

IV of Spades and Shanti Dope are set to perform at the Gateway Theatre on Friday, 8 November, presented by Bandwagon Live. Tickets are being priced at S$58, $68, $88 (at the door) and $108 (VIP). Get your tickets here or at the door.

VIP tickets include a meet-and-greet session with IV of Spades, an autographed poster and a photo opportunity with the band. 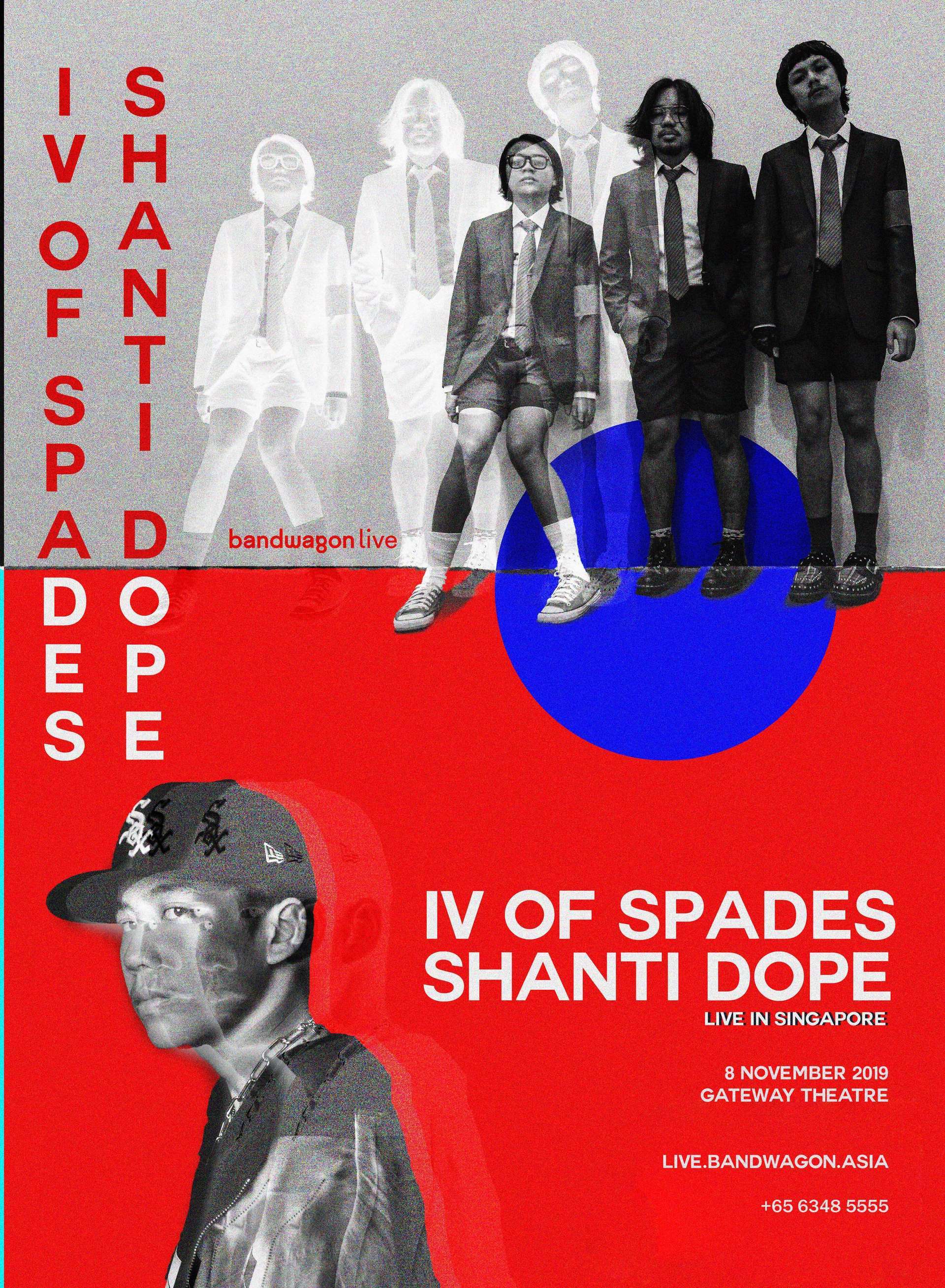