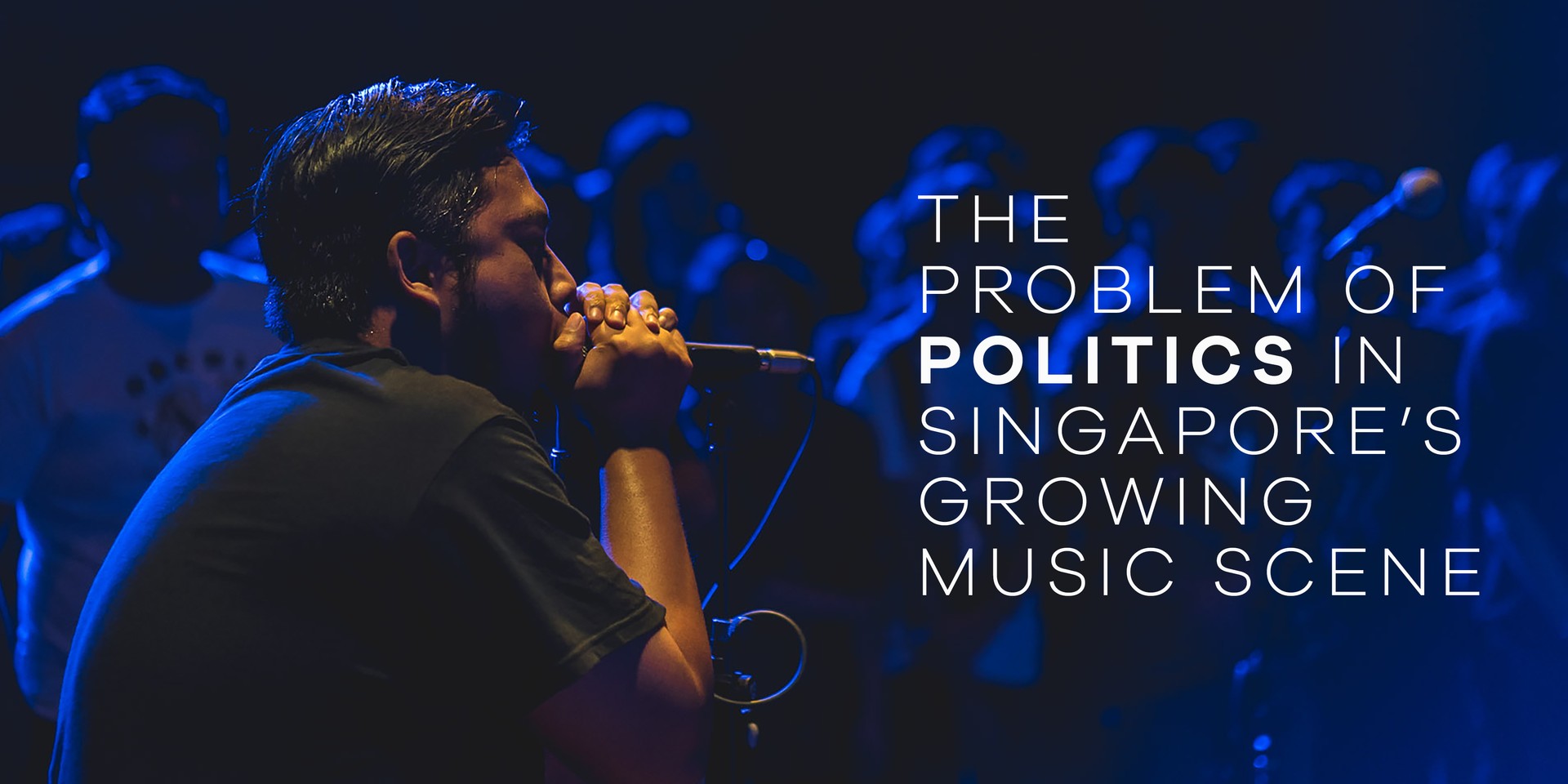 We celebrated our country’s progress while mourning the politician responsible for much of our growth, and we marked our 50th year of independence as the state continued to deny a mature population's readiness to engage meaningfully with challenging and subversive art forms. These events helped ignite important debates about the relationship between artists and the state, but despite their stakes in the conversation and the revolutionary potential of their art form, musicians were absent from the discussion.

Why were Singapore's writers, filmmakers and theatre practitioners doing the intellectual heavy lifting? Why weren't musicians — in a year that critics (this website included) agreed marked a peak in Singaporean music history — chiming in?

The short answer: while plenty object in principle, for most Singaporean musicians, facing the state isn't their fight.

For one, they are far less susceptible to censorship to begin with: government disapproval can thoroughly sink the distribution and performance of films and theatre productions, but Singaporean musicians can always drop music on Bandcamp. But it is also true that taking your music into the public eye requires a greater level of engagement with the government – for example, some musicians chafe at having to submit their lyrics in applications for performance licenses. But for most, it's a negligible or unimportant price to pay.

On the whole, to the average musician, the potential ramifications of government censorship are less real. After all, the days of outright government hostility towards rock music — as was the case in the 1970s and 1990s when the government closed venues and frowned upon mosh pits — are over. The government, as a potential source of funding and even patron, cuts a far friendlier figure nowadays. 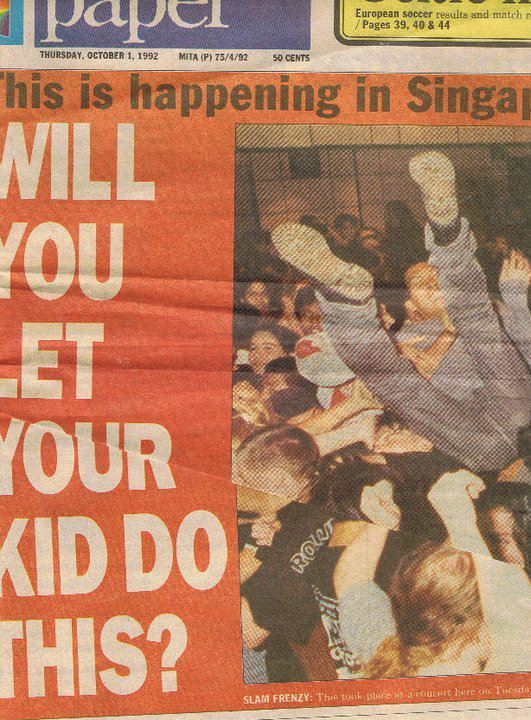 The other, more compelling reason? There isn't really anything in contemporary Singaporean music provocative enough to censor, for it is often far more personal than political. There are mavericks on the margins, but most local pop, rock and indie musicians shy away from engaging with or even referencing Singapore’s myriad sociopolitical issues. The result is art that, for all its beauty and prowess, sometimes feels like it was made in a vacuum, completely untethered from the locality in which it was created.

Singaporean musicians take their cues from Western sounds to a sometimes slavish extent. Hip-hop artists — who are the least reluctant to speak or sing in local accents or dialects, and to sample actual Singaporean sounds — serve the strongest rebuke to this homogeneity, but they are not necessarily oppositional change-makers, either.

Singapore is still an expensive city to live in, and the success of the scene is always dogged by the struggle of financial sustainability and other money problems...

Local musicians who do dare to get political are refreshing, but they often sorely lack any subversion or notable antagonism towards the frustrating status quo. As To Singapore, With Love and The Art of Charlie Chan Hock Chye have shown, in the eyes of the Singapore government the most subversive art seems to be that which illuminates alternatives to the state’s historical narratives. The musicians who do address the local context prefer to nestle within the reality produced by those familiar narratives, fleshing out — and staying within — the present Singaporean condition.

The author of The Art of Charlie Chan Hock Chye, Sonny Liew, had his grant of $8000 by the National Arts Council revoked because his comic "potentially undermines the authority or legitimacy" of the Singapore government, according to NAC.

For instance, there’s 'Money' by electronic duo .gif, who ruminate on the difficulty of making art in a capitalistic city, and 'HDB Love Song' by riot grrrl band NO PANTZ, a cheeky parody of Singaporean romance's inextricable link to home ownership. It seems like singer-songwriter Anise, in her recent song 'Pulp Fiction', could be responding to NLB’s landmark embarrassment of 2014, when they gave into homophobic pressure and removed an LGBTQ-friendly children's book from its shelves. But Anise’s words are ultimately oblique, any intended statement indirect.

Singapore's music scene is experiencing a renaissance, as musicians create with unprecedented productivity, gaining more supporters and greater recognition through local radio play and critical coverage. But Singapore is still an expensive city to live in, and the success of the scene is always dogged by the struggle of financial sustainability and other money problems (high rents and the lack of small to mid-sized venues, for example). It’s safe to say musicians have more pressing issues to worry about than high-flown ideals.

Furthermore, if the government can ease musicians’ financial burdens with grants to record albums or go on tour, why would you reject such an opportunity?

“We’re very grateful because nowhere in Southeast Asia will you ever get the opportunity to get state funds or any kind of funding to do this full-time. But are we making use of these funds in the most progressive and ethical way? We question ourselves all the time, and we wonder how much of an impact we’re actually making.”

“If the government wants to give us money for our music, we don’t mind,” says Wormrot vocalist Mohammad Arif bin Suhaimi. The famed grindcore band's guitarist, Muhammad Nurrasyid bin Juraimi, notes that although they're signed to British/American record label Earache Records, finances still get tight — especially with the high costs of international touring.

“We understand that there are bands that don’t want anything to do with the government,” he says. “But we are not punks. We are musicians. We need money.” Wormrot plays music in a thoroughly oppositional genre, but they are first and foremost flexible realists, uninterested in toeing a genre’s anti-establishment party line if it just makes it more difficult for them to play music.

Wormrot worked with Scion AV, a record label serving as a subsidiary of the US division of Toyota, to release their 2011 EP, Noise, for free download. This helped boost the band's profile in the US, alongside acts like A$AP Rocky, Justice and Meshuggah.

Furthermore, The Observatory’s experiences show that even veterans who truly bristle against the system have to bite the bullet and make tough decisions. The esteemed noise rockers are an explicitly sociopolitical band: Their 2014 LP Oscilla levels "new strategies of resistance" at "new forms of oppression," and their upcoming album August is the Cruellest expounds upon the same theme (the album title may be a literary allusion, but the choice of month is no coincidence).

But The Observatory is also the only independent Singaporean band receiving long-term funding by the National Arts Council (NAC). The band decided to go full-time in 2010, but as the departures of various core members proved, it was too difficult to do so without help. In 2013, The Observatory applied for and received a major grant that will partially fund their work for three years.

“That’s a slightly uncomfortable place to be in,” admits Vivian Wang, keyboardist and founding member of the band. “We’re very grateful because nowhere in Southeast Asia will you ever get the opportunity to get state funds or any kind of funding to do this full-time. But are we making use of these funds in the most progressive and ethical way? We question ourselves all the time, and we wonder how much of an impact we’re actually making.”

As grant recipients, The Observatory has to run almost like a registered company, submitting regular reports of their finances and sending the NAC detailed updates of their progress. Nevertheless, the band has never had its artistic freedom curtailed, says Wang. But The Observatory are still patently aware that they function within a state-delineated artistic space — a space whose boundaries you may test only to have them snap back to sting you, as the experiences of other artists have shown.

You could call The Observatory’s decisions hypocritical self-sabotage, or you could call it their strategy for a complicated situation: where ideological purity is a luxury.

The trailer for The Obs: A Singapore Story, a documentary focusing on the band.

Wang doesn’t think that this timidity of political expression is unique to musicians: Singapore as a whole shies away from confrontation. “It’s difficult to do anything without worrying about the consequences, and that in itself is a kind of self-censorship,” she says. “We’re so afraid to speak [for fear of] being denigrated, or judged, or deemed a troublemaker.”

Guitarist Hafiz tells me, more significantly, that their DIY philosophy and external pressures — like the threat of police presence at shows (which, in turn, inspired their track 'Desperation in a Police State') — have turned members of the punk community into political actors. They create space for themselves (literally, with punk shophouses) and strategize against problems their community faces, such as the closure of the latest DIY punk space or the Substation’s impending change in direction.

Daily Ritual performing in Pink Noize, a performance venue once populated with DIY shows. The venue has since shut down due to issues with authorities, according to a Facebook post by the venue's former owners.

Recently, these discussions have become public, thanks to an op-ed by self-proclaimed “punk person” and Prohibited Projects head Shaiful Risan. NO PANTZ guitarist and Aliwal Arts Centre centre manager Natalie Pixiedub has also weighed in, while other musicians and people within the scene have left their thoughts in the comments of an online petition aimed towards the Public Petitions Committee, the National Arts Council and the government at large. It’s heartening to see the music scene begin 2016 with some form of meaningful political organization and discussion.

The issue of The Substation has, to some degree, politicized Singaporean musicians and the scene at large because it is an issue with ramifications serious and wide-ranging enough to spur action. It has become exactly what Hafiz thinks it takes for Singaporean musicians to step up: “a major problem.” Perhaps all it takes is a change of mindset, where Singapore’s musicians decide that the government’s tense and sometimes hostile relationship to the arts is a problem – and their problem.

Maybe more Singaporean musicians should start wondering if their willfully or fearfully apolitical art is a problem. Not every band needs to start writing protest songs, but if they’d like to try, they should know that territory lies waiting to be explored.