Pulling back the curtains for what's to come, SM Entertainment just held SM Congress 2021 where they shared upcoming artist comebacks and business expansions.

Shared on 29 June via YouTube, SM Entertainment CEO Lee Sooman greeted fans and audiences from all over the globe to the press conference and shared details about the Korean entertainment company's future.

In commemoration of its 27th anniversary this year, SM Entertainment will further expand its operations and services to encompass a wider range of the entertainment and music industry, as well as achieve its mission to be the country's leading media production company.

Here are some highlights from SM Congress 2021.

SM Entertainment has always sought out to create an entire cultural experience with their artists and their music. In the company's latest effort to propagate SM Culture, they've created SM Culture Universe or SMCU – a vast cinematic metauniverse that ties in with SM artists' music.

The concept of SMCU was first referenced during the creation of SuperM, SM Entertainment's supergroup that have been dubbed as the "Avengers of K-pop". In the last year, the cinematic universe has also been hinted at through several releases from the company, including NCT's 'Resonance', Red Velvet's IRENE&SEULGI's 'Naughty', EXO's 'Don't Fight The Feeling', and more.1

From what we know so far, Kwangya is home to a dangerous villain called the Black Mamba, and alter-egos created based on data. This includes aespa's virtual avatars: ae-aespa, who are currently the only SM acts to be seen in this parallel dimension.

As part of SM Congress, NCT's Mark did tease that they will soon be seeing fans in Kwangya. "We are preparing various contents which will reveal NCT's concept universe, which has been veiled in mystery until now. So let's meet in Kwangya soon," says Mark. 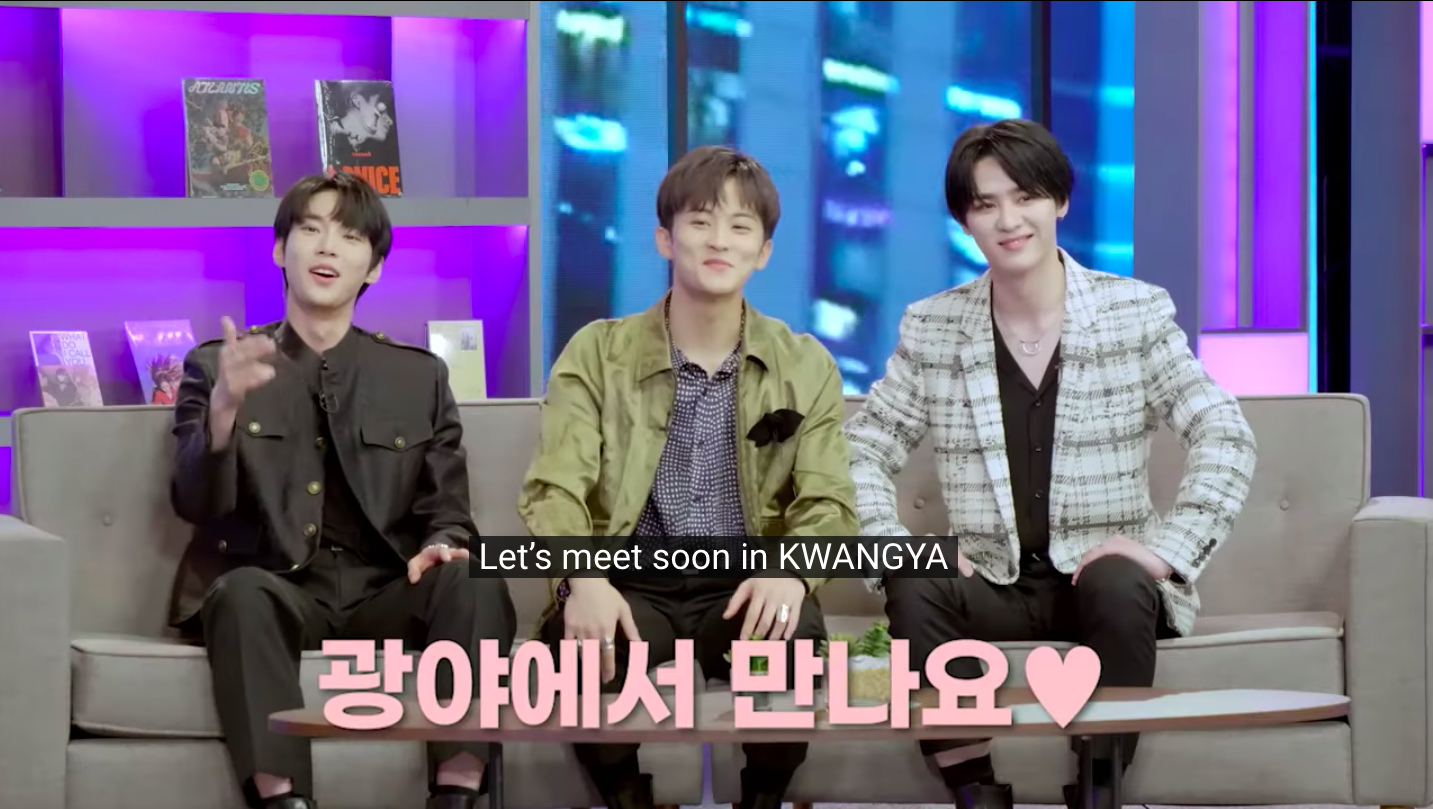 In the press conference, Lee Sooman unveiled that the SMCU will continue to unfold throughout the year via various mixed content channels, namely through cartoons, animations, webtoons, motion graphics, avatars, and novels.

As part of SMCU, the company will also be remaking H.O.T's music video for 'Free To Fly', which was originally released in 1997. The remake version of the music video, which was previewed during the Congress, gives a glimpse of Kwangya and the song's role in the SMCU and features NCT's Sungchan alongside aespa's Winter.

This also comes as part of SM Entertainment efforts to remaster previously released music videos and tracks from their founding roster of acts like BoA, Shinhwa, Fly To The Sky, and more. The company has partnered with YouTube Music to remaster over 300 music videos and songs that will be released in the coming months.

In an announcement made earlier this year, SM Entertainment unveiled that they are partnering with MGM Television to host a new survival audition show to recruit members for the newest NCT sub-unit, NCT Hollywood.

In a video presentation featuring MGM Television chairman Mark Burnett, the survival show is said to feature 21 contestants who will fly to Seoul to experience Korean culture and "SM Entertainment's authentic training" process. Winners will be chosen throughout the show and will debut as 'NCT Hollywood' in America, and will focus on promoting NCT's global identity in the States.

NCT's Doyoung also revealed that current members of the group will also act as mentors for the contestants and will be guiding them based on their experience.

During the Congress, aespa and members of NCT joined Lee Sooman in a segment called SM Show, where they shared the latest news and spoilers from SM acts themselves.

aespa revealed that they are currently in the midst of preparing their first album which will also include the entirety of SMCU Season 1. The group's upcoming album is slated for release later this year and will follow their latest single 'Next Level'.

NCT members Doyoung, Mark, and Kun shared that the group are planning for a myriad of releases for the year, which includes a NCT 2021 release following last year's 'Resonance'.

NCT 127 will be releasing a repackaged album and are currently working to release a full-length album. Meanwhile, WayV are slated to drop their first full-length album this year following the release of their mini-album, Kick Back earlier this year.

NCT's revolving sub-unit, NCT U will also be unveiling a new lineup soon.

To continue their mission to becomes renowned leaders in music, SM Entertainment will be expanding SM Classics, a label under their larger music operations that will focus on classic music and jazz.

Made in partnership with the Seoul Philharmonic Orchaestra, the subsidiary label will focus on creating classic renditions of SM Entertainment's discography in an attempt to bridge the worlds of K-pop and classical music, while also promoting the latter.

In the past, SM Classics have released orchestra versions of Red Velvet's 'Red Flavour' and SHINee's JONGHYUN's 'End Of A Day'.

SM Entertainment's mission has always been to become one of the country's leading media production company. As part of their ongoing plan to carry out this mission, the company has launched SM Originals, a new subsidiary under SM Studios that produces varied video content like variety shows and drama series. 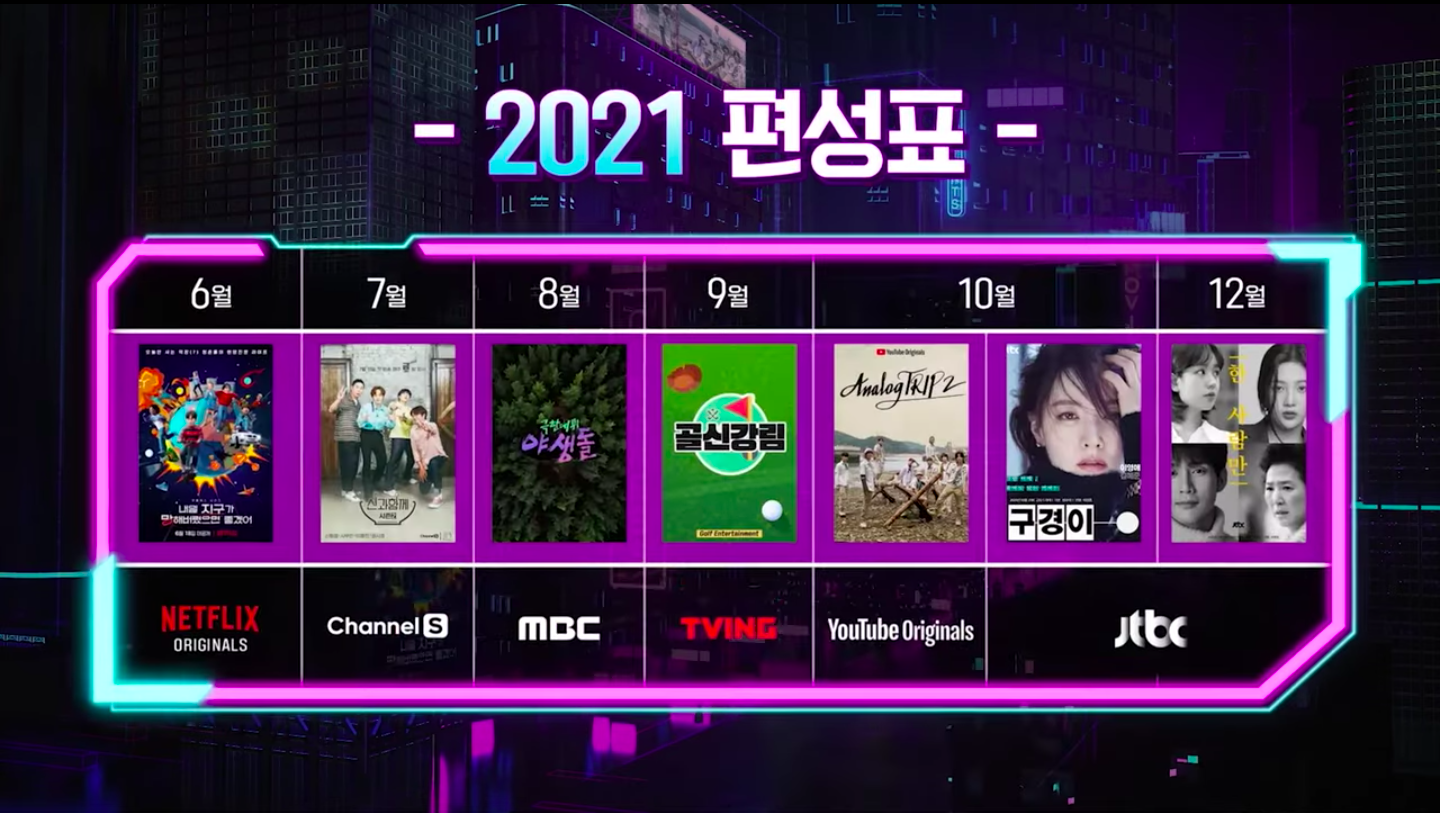 SM Originals' latest project was So Not Worth It, Netflix's first Korean sitcom which featured the likes of GOT7's Youngjae and G(I)-DLE's Minnie. The company has an array of releases slated for the year including food talk show With Shin2, idol survival show Wild Idol, golf reality show True Golf, and comedy-drama series Gukyungi.

SM Originals will also be launching the second season of travel documentary Analog Trip, which will feature NCT 127, via YouTube this October. The first season of the show aired in 2019 and followed the members of Super Junior and TVXQ around their adventures in Indonesia.

This December, the production subsidiary will also be unveiling a melodrama titled Only One Person that stars Red Velvet's Joy, Ahn Eun Jin, Park Sunghoon, and Ko Du-Sim.

The app allows fans to get regular updates on their favourite groups and meet other members of their community, similar to current fan platforms. However, unlike most apps, fans will be able to send their favourite private messages and have a one-on-one conversation.

As part of the Congress, SM Entertainment revealed their Future E-Commerce Shop that showcases more dynamic and never-before-seen cultural experiences. The Shop sees to provide fans with exciting artist merchandise and experiences on top of their current repertoire. 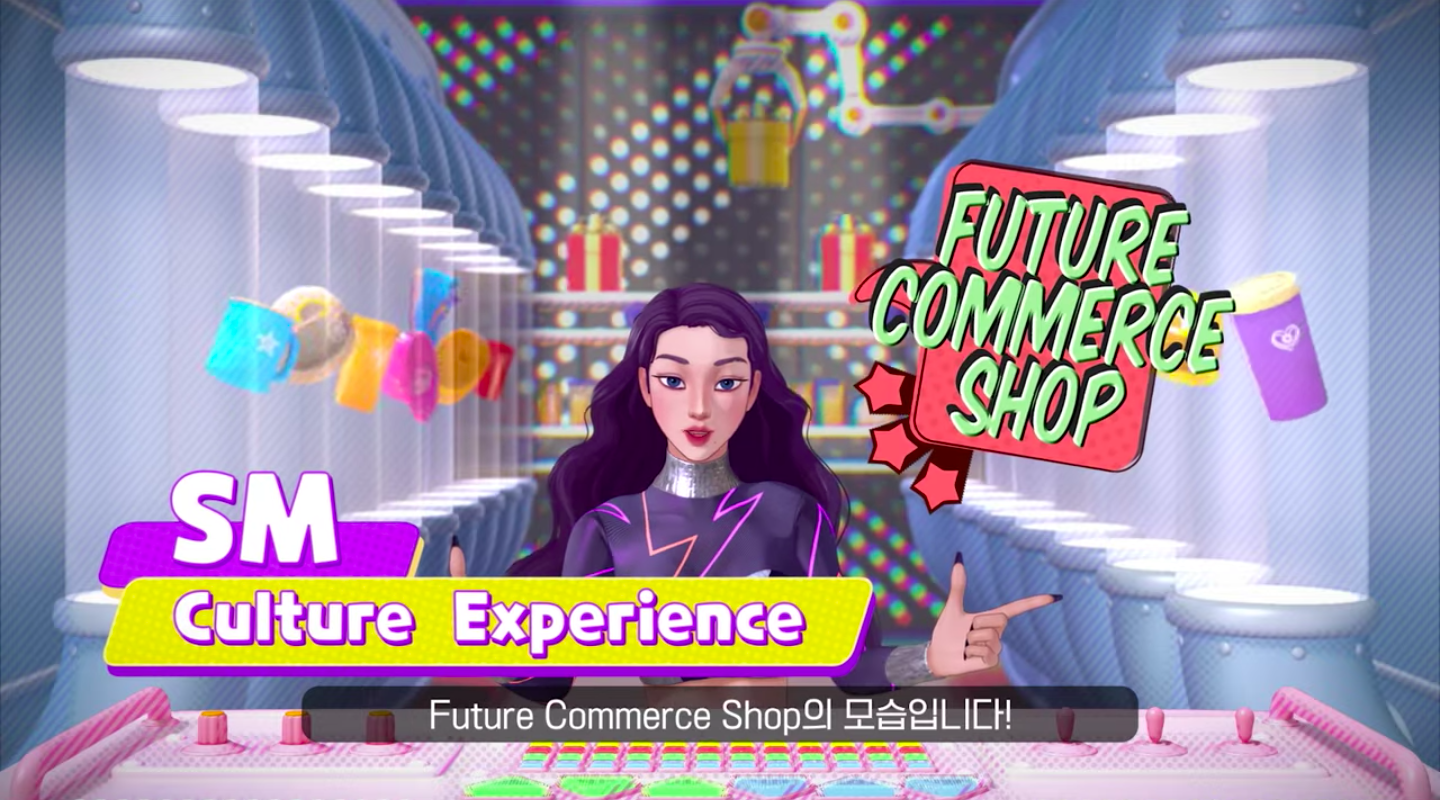 The Shop plans to integrate various forms of technology to diversify fan experiences, this includes augmented reality content integrated merch which will allow fans to see never-before-seen content through their merch using a mobile app, and a text-to-speech service that will allow fans to set up alarms with their favourite idols' voice.

SM Entertainment plans to also include virtual exhibitions as part of their artist releases, starting with EXO's previous exhibit for their latest album, Don't Fight The Feeling. The exhibitions are said to provide fans with insight into the making and inspiration behind their favourite's groups albums, allowing them to further connect with the music. 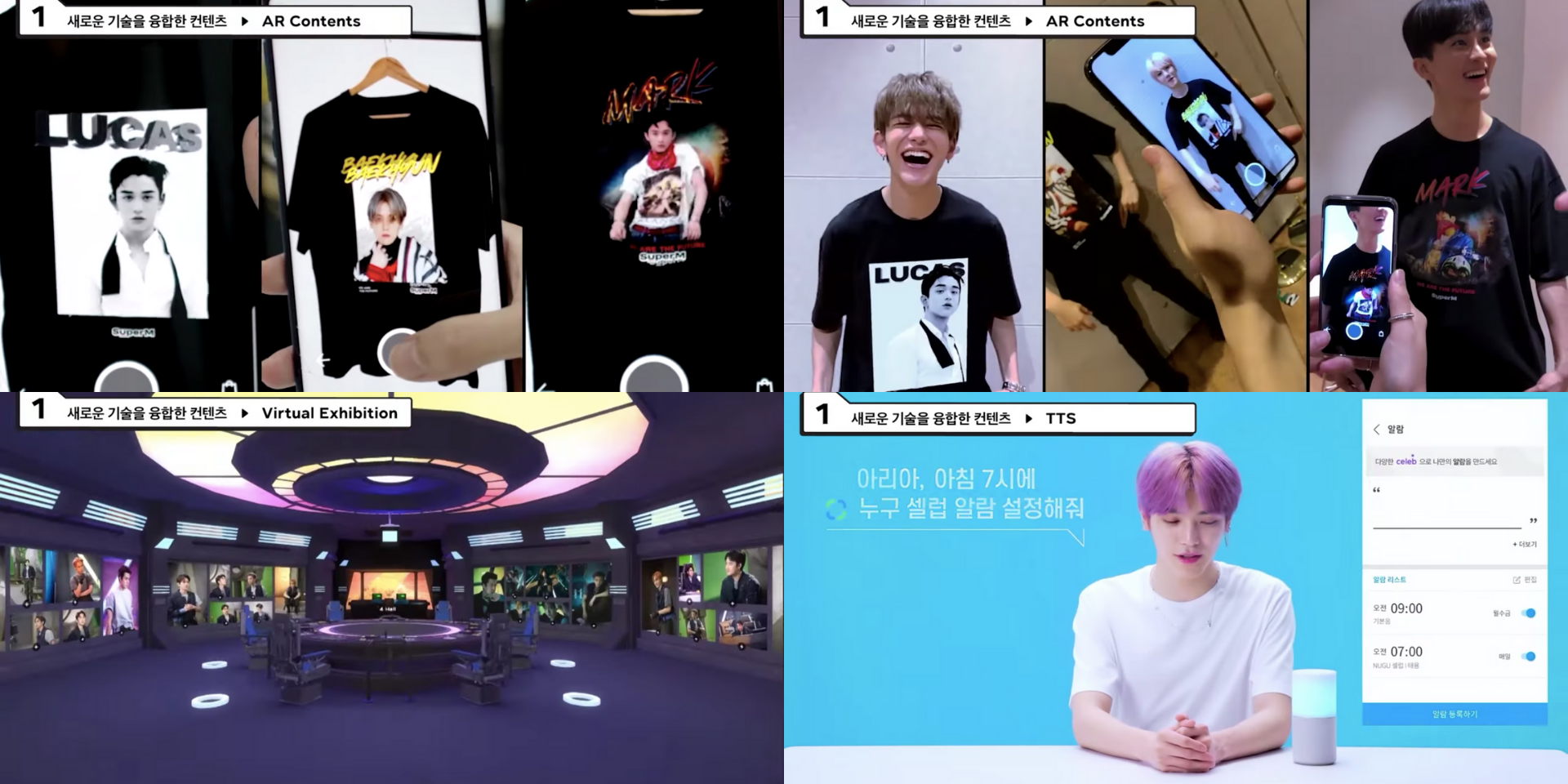 The Shop will also include exclusive merch that have been designed and curated by SM artists themselves, including NCT's Ten's collaboration with Korean clothing line REPRESENT, SHINee's Taemin's upcoming exclusive pajama collection, and EXO's Baekhyun's upcoming scented candles.

Lastly, the Shop will also focus on including brand collaborations similar to past collaborations between SuperM and Marvel, SHINee and Jinro, and NCT DREAM and Pinkfong.

1 An earlier version of this article referred to EXO's song as 'Don't Stop The Feeling'. It has since been amended.