Bands break up, that's not new. But no one expected The Caulfield Cult to hang it up, especially just a year after their third studio album CULT.

While the band has enjoyed moderate success locally and worldwide, their seemingly endless dedication to the road suggested a perpetual lust for traveling and performing for anyone and everyone. But even for the grizzled performers in The Caulfield Cult, that can fizzle out.

Even if they're following the mighty words of Neil Young — "It's better to burn out than fade away" — their frontman Nicholas Wong tells us that it's not as straightforward as that. He reveals more about the band's dissolution, the realities of touring and more in an interview with Bandwagon.

How long did it take before you reconsidered performing under The Caulfield Cult?

It's been long overdue — I've always had a bittersweet relationship with the touring lifestyle. We wanted to break up when our first drummer, Darren, left in 2013, and again at the end of 2014 when (guitarist) Skinny left. For some reason, we just kinda let it go on a little further bit by bit and we got more and more opportunities, so we just went with it.

What led to your decision?

Exhaustion, more than anything else really. I haven't booked a tour or wrote a proposal for an NAC grant in the last six months. It's been a very pleasant six months.

At this point of time in my life, I can't afford to set aside three to five weeks of my life to fly thousands of miles, to sleep on floors in a cold sleeping bag, and play to 20-30 people in basements. We've done that cycle a dozen times and they were always great experiences, but I just can't afford to do that anymore.

At the same time, I don't want us to drift around and not do anything of substance. The band was formed with the main objective to tour, and we've done that from our very first show to our very last. I'd rather have some closure and call it a day than play two shows a year. Plus, we've written three albums, everything that needs to be said has been said — nobody needs a fourth. It's a good time to call it quits.

Have the years of recording and touring with the band taken a toll on you?

100%. It wasn't as exhausting as when I was 19 but my parents don't work anymore, so I have to contribute to a portion of the household expenses and bills — touring a couple of times a year, 4-6 weeks at a go means I'm missing out on a lot of wages.

I come home to absolutely nothing every time and it feels like a vicious cycle: working odd jobs, saving up for a tour, quitting my job for a tour, spending everything for a tour, coming home broke and then working again. I've never had paid vacation days from work — I've never stayed at a job long enough to receive any sort of benefits because no job will keep you if you have to leave for a month like that. Two of us are tattoo artists and they too miss out on work when they're on the road but still have to pay their shops' rent regardless. 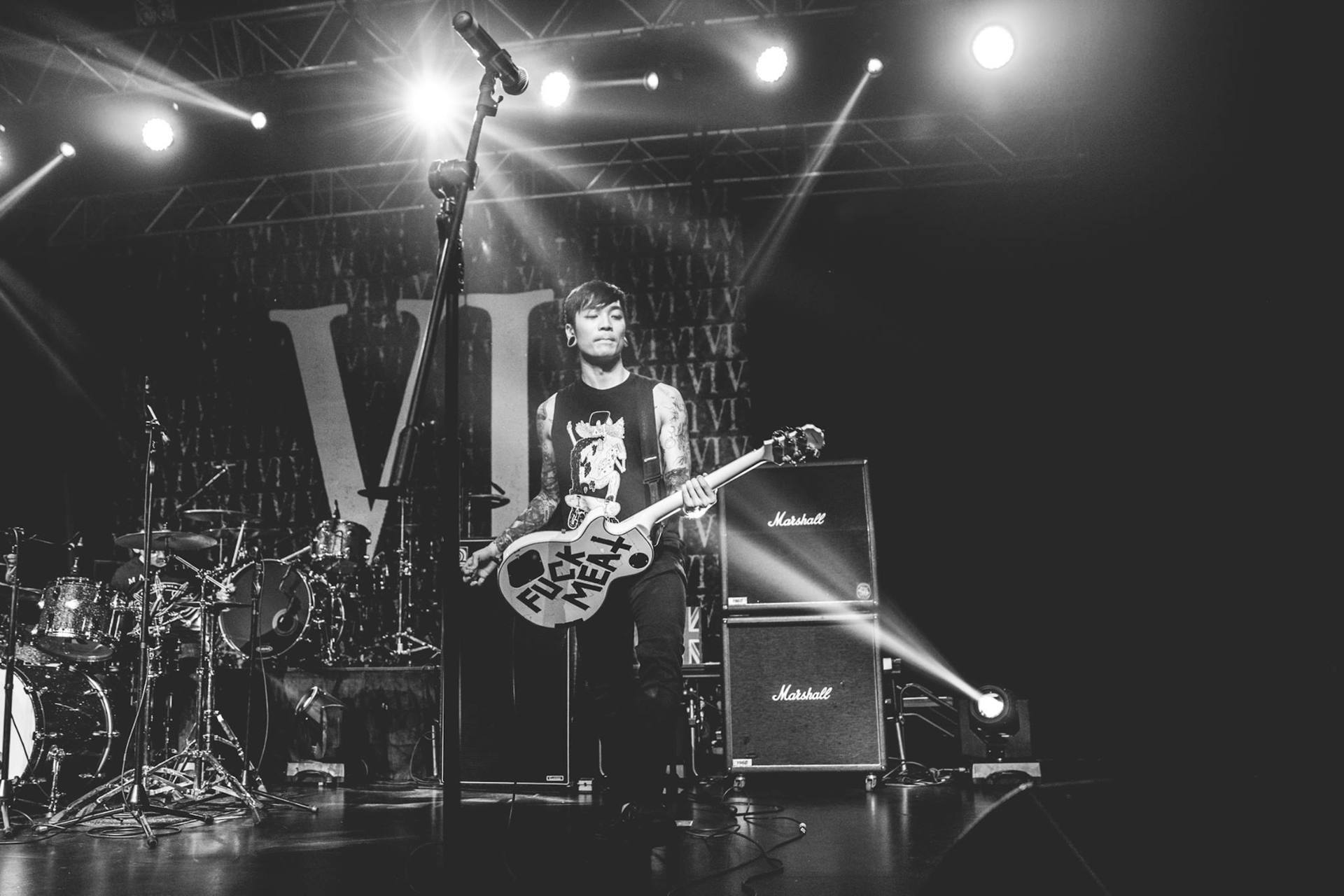 [Wormrot are] playing Glastonbury Festival — [they're] signed to the biggest record label of their genre, sold out world famous underground venues like The Underworld in London, sold hundreds of shirts within the span of a week of shows in foreign countries, but (guitarist) Rasyid still works six days a week when he's not on tour."

Are you satisfied with the music you've put out with the band?

I was really happy with our last record for like the first few weeks, upon receiving the masters, and I think I can say the same for all our previous stuff. But ultimately, I'm never impressed. We're not very good. I'm not a good singer, I can barely stay in tune for half a set — just watch our Audiotree and JUICE Sessions, or even the Bandwagon acoustic session. Those aren't my off days, that's how I sing every time.

Our engineers and producers have done a great job trying to make us sound good on record but I just get bored of stuff very quickly. I wish we experimented more and were more creatively fluid but we all have our limitations. I think we did the best we could with the time we had. I still wouldn't listen to our stuff on the regular though.

There's a prevailing narrative of "making it" as a band — you've performed overseas many times with the band, and you even played punk rock festival The Fest in the US. Give us an idea of all the hard work behind the scenes that other people don't see, and whether in the long run, it was worth it.

It depends on what the individual thinks "making it" means.

If it means to sustain a following of 50-100 people, who know the lyrics to your songs and sing along in the span of one to two years, then a lot of bands have made it. If it means to earn a living out of making music, then nobody has made it.

All the members of Wormrot work blue-collar jobs and they're, musically, the best and biggest band in Singapore. They're playing Glastonbury Festival, signed to the biggest record label of their genre, sold out world famous underground venues like The Underworld in London, sold hundreds of shirts within the span of a week of shows in foreign countries, but (guitarist) Rasyid still works six days a week when he's not on tour.

I know for a fact some people here still think they can someday live off selling the emo/pop punk/hardcore/metalcore music they make. It's not going to happen. If a band as unique and hardworking and creative as Wormrot can't do it, your generic ass band sure as hell are not going to be able to do it.

Maybe some people are not getting accurate statistics, that's why they have a false judgment of how popular a band can be here. Bands can now buy Facebook likes, shares, Twitter followers, Spotify plays, Youtube views, all to give a false image of how popular they are. Being featured on reputable websites no longer mean you're great, it just means you paid a great amount of money to a great publicist. If an unsigned local band has thousands of likes for a post when they only draw 30-50 people to a show or have an average of 22 likes for every other post, what does that mean?

There are a lot of delusional people who think they're the hardest working band — either think they're bigger than they actually are, or think they deserve something more than what they have.

Band folks still complain about The Sam Willows or Gentle Bones getting all the mainstream media attention all the time. They're pop bands, they do pop band things, they get pop band reactions. You think anybody wants to put your progressive, emotional post-hardcore band on national tv? You think your melodic skate punk band will be invited to play National Day?

I still bloody love playing music live and touring, it's just not practical to go that hard anymore."

— Nicholas Wong, on continuing with other music projects.

We've toured Europe six times and North America thrice. In our first three years of touring, half the shows have less than 30 paying attendees. Not many bands like to admit this, they just want to show you their super fun tour video and hide the shots of empty venues and tell you "Yeah, the tour was pretty good, it was fun." I can assure you every band that goes out of the continent to play non-festival, non-major support shows have played to gigs where there were 10 people or less.

Sure, it got slightly better towards the end and we played some festivals where there were a few hundred people. But for every festival, there's a week of small shows leading up to it. On our last European tour, we played a small town called Meppen in Germany where there were just four paying attendees.

It's very normal for many bands, many of whom are bigger than us. I'm not complaining but it's not where I want my life to be right now. I'm responsible for booking all the tours — although it's a lot easier to do now compared to booking in 2012, it still takes months to do it. Outside of the half a dozen "sure thing" responses, we still get turned down by dozens of promoters and have to eventually settle on shows in towns that are out of the way and can guarantee no money on weeknights.

Basically, we've done this many times and it'll be the same if we were to do it more. We've reached our plateau. That being said, we've done many incredible things and have been given many incredible opportunities and met many incredible people. Touring Europe and America might not be the most special thing for Singaporean bands now, but we did it at a time where no hardcore/punk band here was doing it. We're super fortunate to be able to play festivals and do shit like Audiotree — being such a mediocre band — and I'll never trade that for anything.

If you had to narrow it down to one thing that helped you carry on with the band these past few years, what would that be? Why?

That's hard to say. Maybe it's the excitement of going out on the road, or to put out new music. Maybe it's the juvenile dream that one day we might be able to be successful and influential musicians and have the same effect on aspiring kids — how the ones that came before us had on us. I still bloody love playing music live and touring, it's just not practical to go that hard anymore.

What will you be up to, post-Caulfield?

I'll still be playing in Bruised Willies, we're in the final stages of producing a new EP and it'll be out in the third quarter of the year. I also play drums in a new band playing a style of music I've never played before — we've finished a record last month and it's in the mixing process right now. I'll always be playing music and I'll always find an outlet to be creative with other creative individuals, but I'll never be as busy as I was with The Caulfield Cult.

What do you have to say to everyone who's followed the band over the past few years?

I just wanna say thanks to the people who've supported us — the handful of promoters that have done repeated shows for us, even though we were never a great draw; the great folks who spent money on our merch; the labels who spent money to put out our records. I hope we've made a positive difference to some. If anybody had any questions, drop them on our Tumblr, I'll reply to everything, ciao.