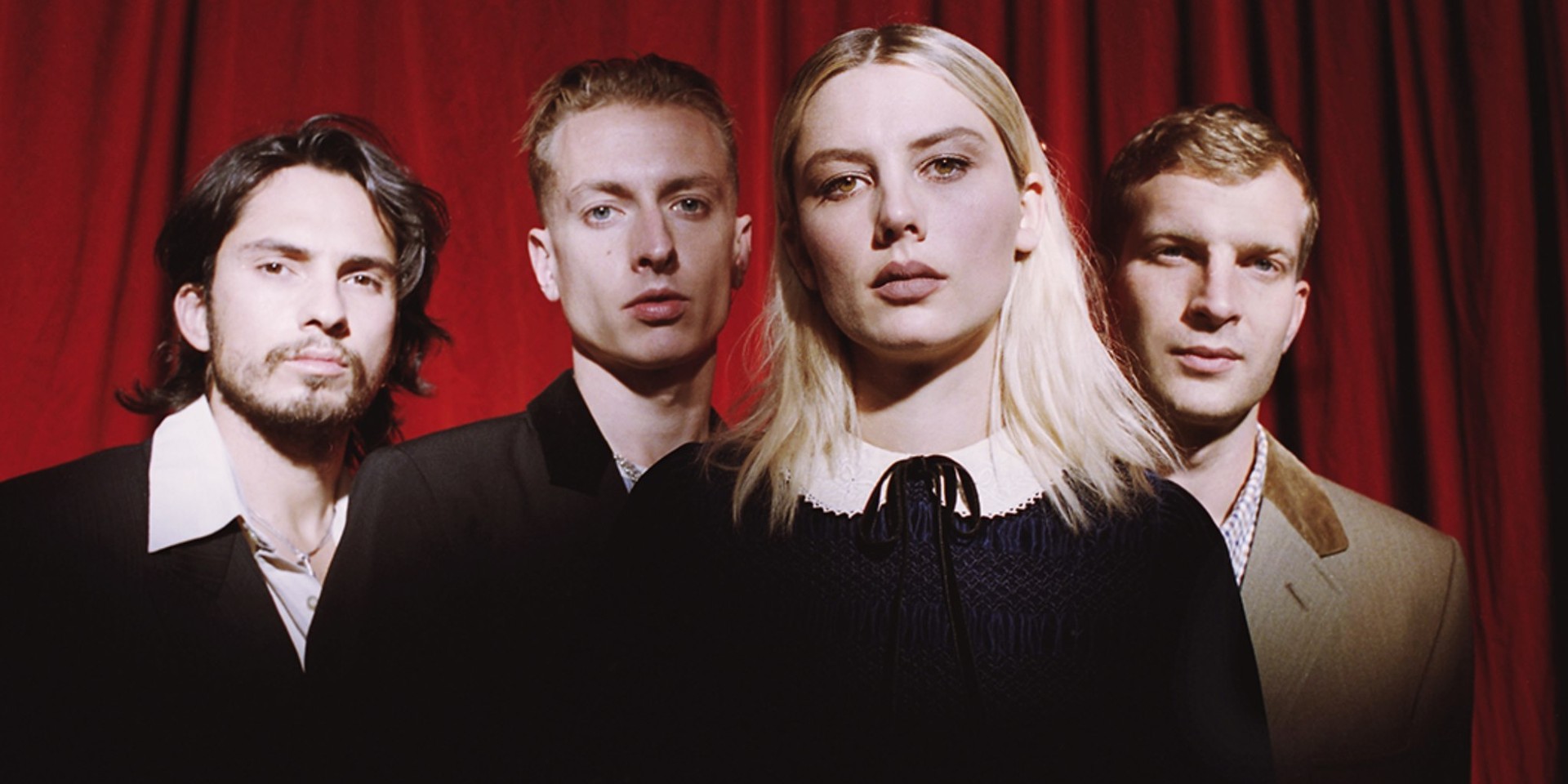 Their newest full-length LP in four years, Blue Weekend arrived last Friday (4/6) with the lead singles ‘The Last Man On Earth’, ‘Smile’, ‘No Hard Feelings’, and ‘How Can I Make It OK’. Their most ambitious album yet, the 11-track project has already garnered critical acclaim from the British press.

Comprising Ellie Rowsell (vocals/guitar), Joff Oddie (guitar), Theo Ellis (bass), and Joel Amey (drums), Wolf Alice were already fast-rising names in contemporary British rock since the release of their 2015 debut album My Love Is Cool. Their sophomore effort Visions of a Life took home the coveted 2018 Mercury Prize, which further propelled the band to stardom. Following an extensive period of touring in 2019, the band regrouped in an Airbnb in Somerset to start working on what would become Blue Weekend.

“We got the name Blue Weekend when Ellie, Joel, and I were in an Uber in Brussels, which is where we recorded the album. Joel was saying that the next ‘blue weekend’ we should go to this forest that was nearby, because it was such a blue sky that day. The name really stuck around, and it felt like a really cool album title,’ shares Ellis in a press conference.

“We also like the two sides of the colour blue—it being sad, or happy, and just full of different emotions,” he explains further. This desire to capture the different shades of blue is reflected across the 11 tracks, resulting in a record that manages to make heartbreak and melancholia sound euphoric.

Narratively, Blue Weekend also stands to be some of the most cohesive and evocative works among Wolf Alice’s discography. As shared in the press conference, it is a concept album that depicts a trippy night out on the weekend, starring Rowsell herself. Together with London-based photographer and director Jordan Hemingway, the quartet also produced a short film of the same name to “bring the music of Blue Weekend to life”. It will premiere on 10 June at Picturehouse Central in Soho, London.

“While we were stuck in lockdown, we were figuring out ways of conveying this album to people. One of the things we were able to do was to shoot music videos. We had some ideas, and we ended up shooting eleven music videos, one for each song on the record. They became a sequential story, with a loose narrative of a blue weekend,” reveals Ellis.

“It follows a story that Ellie plays the protagonist in, and it was a whirlwind of eight days shooting eleven music videos, which culminated in Ellie ending up in the sea in just her pants in the middle of the winter. Which was quite scary, actually,” shares the bassist.

Set in a Lynchian dreamscape, the universe of Blue Weekend is at once unsettling and sublime. As Rowsell meanders through dingy streets and pubs in a drunken haze, she reckons with ghosts of her past, undergoing an existential transformation of sorts. Confronted by an old lover, she contemplates lessons on failed romance, friendships, and self-love.

While the new record is marked by the band’s ambition, at the heart of it lies an uncomplicated ethos: it’s all about “chasing a feeling”, in their words. Album opener ‘The Beach’ is an example of this, with an atmospheric buildup of drums and guitars that crash into a symphonic climax, promising an exhilarating night to come.

‘How Can I Make It OK?’ is another highlight that demonstrates just how good the band have gotten in creating atmospheres that suck you right in. Buoyed by icy synths and exuberant guitars, the new wave ballad is one of the most triumphant songs on Blue Weekend. Rowsell’s vocals are reminiscent of Kate Bush, delivering the right amount of melodrama as she belts: “And now a moment to change it all / Had life before been so slow? / Urgency takes hold / But to live in fear isn’t to live at all.”

“We had a demo for ‘How Can I Make It OK?’, and when we first played the song in our rehearsal room, we instantly enjoyed playing it. I knew that was a good sign, and we wanted it to go on the album. I don’t remember the song being too much of a tricky one, but we were wary of it becoming too eighties,” recounts Rowsell.

“I tried to put loads of synths, but our producer Markus [Dravs] wouldn’t let me,” jokes Amey. “There’s quite a lot of percussive programming, and bits like that. Joff’s also got some really atmospheric guitars on the song, and I think he was trying to keep the momentum constantly going throughout.”

Testament to Wolf Alice’s desire to explore the full emotional spectrum, Blue Weekend also has its raucous moments. On ‘Smile’, the band return to the grunge-influenced sounds that populated their earlier material. Similarly, ‘Play The Greatest Hits’—the spiritual successor to 2017’s 'Yuk Foo'—sees Rowsell at her most visceral, with feral screams layered over snarling guitars and pummeling drums. A blistering number about numbing one’s emotions with music, the song holds space for the anger that emerges from grief and pain.

While Blue Weekend is held together by a thematic core, the album also has an intentionally unstructured feel to it, with a diverse mixture of songs that could each stand on their own. For Rowsell, serendipity and spontaneity were key to the creative process. “As Joel mentioned, we based our decisions and directions on just chasing a feeling, really,” shares the frontwoman.

“Maybe that’s why a lot of the songs on the album sound different from one another, if you don’t listen to them in the order that we’ve set them out in. That makes it a more powerful experience for us as recording artists, and also as listeners. We sometimes have talks before writing stuff about what we want to do, but that sort of planning often gets lost when we do something unexpected. Rather, it’s about trying to amplify the feelings of each specific song itself,” she adds.

Ultimately, Blue Weekend is a labour of love that crystallises Wolf Alice’s journey since their formation in 2010. For Rowsell, this sense of fruition felt the most palpable at the literal end of the recording process. “There were special moments throughout the whole process, for sure. But the most fulfilling part would be when it was finally mixed and mastered,” the frontwoman tells Bandwagon. “I went for a walk and listened to it in its entirety as the finished product for the first time, and that’s where I’m like, okay, I can breathe again,” she continues.

These final moments of completion are mirrored on album closer ‘The Beach II’, as Rowsell reflects on the cyclical nature of life, joined by her bandmates at her side. With guitars drenched in warm fuzz, serenity washes over as she sings: “And the sun goes down, as it must come up / Consistеnt like the laughter / Of the girls on the beach, my girls on the beach / Happy ever after.”

“One of my favourite songs on the album is ‘The Beach II’. That went into the studio as a different song, then one day Ellie came in and said she’d rewritten the lyrics. We had a listen, and our minds were blown,’ shares guitarist Oddie. “I think it’s a really special one because it finishes the album in the same kind of geographic place where it started, but more uplifting and happier.”

Just like many other bands who’ve had to pause their touring plans due to the COVID-19 pandemic, Wolf Alice are also itching to get back on the road again. Having performed at Glastonbury Live At Worthy Farm just last month, the four-piece will be heading on a North American tour beginning this October. Additionally, the band have already sold out most of the shows for their 2022 UK and Ireland tour, with a few more dates added.

When asked about a possible Asia tour, Ellis enthused: “We’d love to come as soon as humanly possible. When they say go, we will go. We’ll be in an Uber to the airport, we’ll forget all our instruments and just arrive there.”

“We’ll be on an Uber to Asia straightaway,” adds Oddie.

Until then, listen to Blue Weekend in full here.