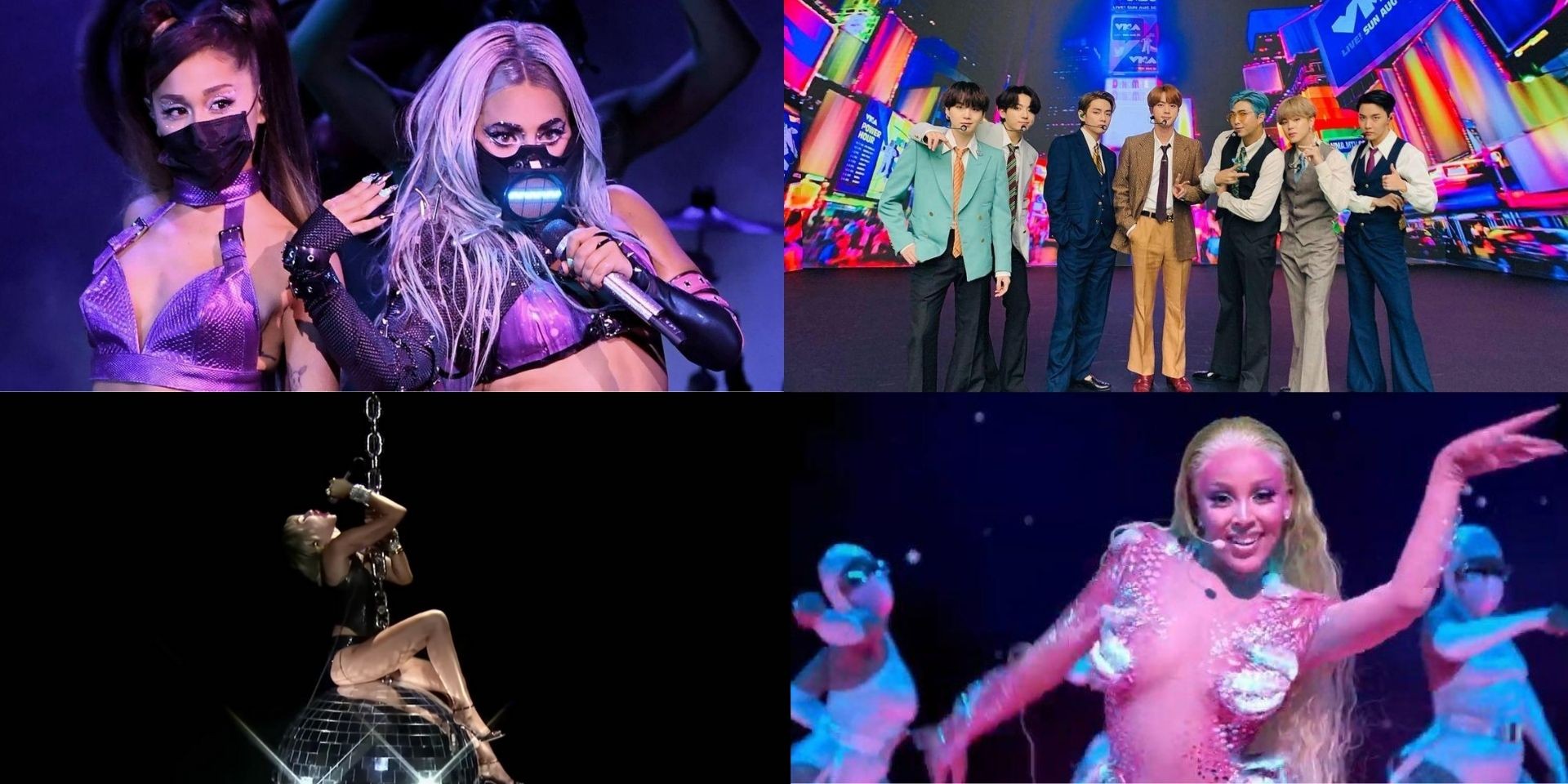 Every year, the MTV Video Music Awards celebrate the biggest names in music and gift us with unforgettable performances. This year, an uninvited guest (COVID-19) joined the party but the show must go on. The 2020 VMAs now stand out from its previous editions in the most historically extraordinary way with an outdoor show and stars performing with their masks on.

From Lady Gaga's Chromatica medley with an Ariana Grande appearance to Miley Cyrus bringing back the iconic wrecking ball, and BTS singing and dancing their way through one of 2020's biggest hits, here's a roundup of this year's top 5 must-watch performances.

Winning 'Song of the Year' and 'Best Collaboration', the smash hit 'Rain On Me' stayed true to its futuristic theme as Lady Gaga and vocal powerhouse, Ariana Grande performed with masks on as part of the Chromatica medley. The power duet was sandwiched between '911' and a stripped-down then upbeat pop version of 'Stupid Love'. It was completed with an intensely bright pink stage setup with fast-paced choreography. This year, Lady Gaga was the most awarded artist (along with BTS) as she brought home four VMAs, including the very first Tricon Award, adding to her substantial collection of 13 Moon People.

After endless dance covers of the viral TikTok song, Doja Cat finally gave us the live performance we deserve. The 'PUSH Best New Artist' Winner, performed both hit singles 'Say So' and 'Like That' in a mermaid-like shimmering bodysuit as she glowed on the neon stage, serving intergalactic space queen vibes.

At this point, what has BTS not achieved? After breaking the YouTube record for most number of views in 24 hours (a whopping 101.1 million views), BTS has now joined the MTV stage to become the first Asian act to win the Best Pop award. The Bangtan Boys wowed fans with their explosive performance of 'Dynamite' all the way from South Korea, delivering flawless, on-point choreography as the background of fireworks and cityscapes added to the electrifying performance. Once again, BTS further solidified their footing as a global force as they took home 4 VMAs (Best Pop, Best Choreography, Best Group, Best K-pop) - sharing the throne with Lady Gaga as the most-awarded artists of the night.

Nothing says reunion like Miley Cyrus and her wrecking ball. Except for this time, it's replaced with a disco ball to compliment her latest single 'Midnight Sky'. Recreating her 2013 VMA performance, Miley hooked onto the disco ball as she swung into our hearts. The 'Best Art Direction' and 'Best Editing' winner sang soulfully against the backdrop of minimalistic red, blue, and black backgrounds then gracefully ascended the stairs as she got on the iconic wrecking, now-disco ball.

Showing up with a bloodied face similar to the music video, The Weeknd opened the VMAs with a performance from the Hudson Yards' The Edge. He gave us an incredible performance of 'Blinding Lights' accompanied with a helicopter hovering above him while he belts his vocals. The 'Best R&B Video' winner performed on the viewing deck looking over the Manhattan night lights with fireworks that sparked off at the end of the blinding performance. The artist also took home the biggest award of the night with 'Video of the Year'.