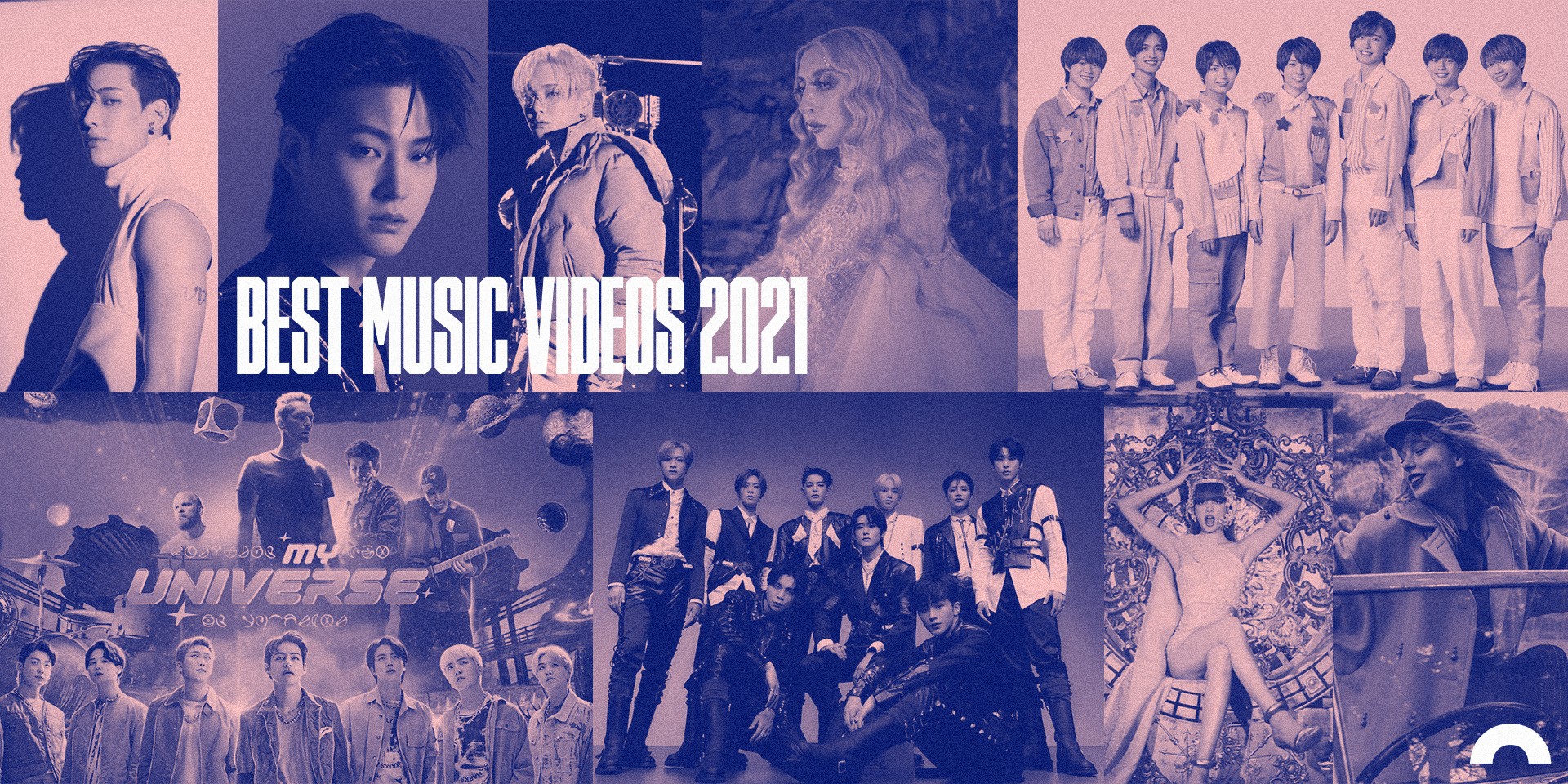 Now that we've tackled our favourite songs, collaborations, albums, and EPs from 2021, let's head on to another medium where we "view" tunes: music videos.

Music videos have certainly come a long way since MTV first made its boom in the '80s. We've come across those casual band-in-Bruce-Wayne's-garage setups, band-acting-in-a-Fantasy-epic short films, down to those multi-million-dollar band-in-outer-space-with-alien-counterparts kind of visuals. It's been a crazy ride for this craft and despite the ongoing pandemic, today's artists are still able to deliver some of the wildest and most breathtaking videos we've seen thus far.

Check out the Bandwagon team's list of Best Music Videos from 2021 below.

Sometimes a music video wows with its elaborate production and complex imagery. Sometimes, you just need something unabashedly cute and earnest in its simplicity. Naniwa Danshi manages just that.

Where through the years the industry has produced a rich variety of acts with more modern pop sensibilities, they're a group that showcases the classic J-idol charm: sparkling, playful, full of colour and smiles. In 'UBU LOVE,' the boys spring to life as a customer finally stops by the 728 Energy Station – an ode to 28 July, the date their debut was announced. This sends them on a frenzy to turn the customer’s car spotless and cheer its driver (the viewers) up through a pinksplosion of song and dance. It works like magic.

It works exactly like the rush of first love, to which the title alludes. There are bubbles in the air to match the bubbliness of the music, and the uncomplicated dance steps are served with such serious exuberance that it becomes infectious. It’s no surprise then that the video has garnered over 18M views since its release in October, and that even K-pop and C-pop stars have joined the dance craze. I for one am excited to see how much more cheer these boys bring in future releases.  - Ginny Palma, Contributing Editor

The biggest collaboration of the year, 'My Universe,' also has an equally gargantuan music video. Directed by iconic music video director Dave Meyers, with worlds created by production designer François Audouy, the music video takes us on a journey with DJ Lafrique to different worlds. Each world is represented by one band - Coldplay from Planet Floris, BTS from Planet Calypso, and the scene-stealing Supernova7 from Planet Supersolis. (I'm a Loop & Switch stan now.)

While scenes with Coldplay and the super cool alien band, Supernova7, were shot in Barcelona, Spain, because of the ongoing pandemic, BTS had to shoot their scenes back in Korea, with green screens. The final output is reminiscent of an intergalactic blockbuster except this one stars the biggest bands in the world and their alien friends coming together despite obstacles. - Camille Castillo, Editorial Director

Best of 2021: Collaborations of the Year

‘I Bet You Think About Me’ - Taylor Swift

I love it when Taylor Swift makes fun of herself, so when she did it again for ‘I Bet You Think About Me’, I was more enamoured than ever. It was also her BFF Blake Lively’s (hi, Serena!) directorial debut, and it’s always nice to see friends get together to make stuff.

Oh, and that split-second frame of her giving the middle finger gives me life. - Kara Bodegon-Hikino, Staff Writer

The title track from NCT 127’s third full-length album was met with equal amounts of praise and misunderstanding. Filled with the most unprecedented elements: a flute so high up the mix, a discordant piano, an acapella-like chorus that highlights the group’s vocal strength, and plenty of empty space that allows the song to breathe; 'STICKER' is the group's most audacious release of their career, arguably a feat of pop perfection that's ahead of its time.

All that is packaged in an incredibly polished and cleverly edited music video, set in the futuristic world of cowboys. A peep into their behind-the-scenes footage displays the level of detail and attention from their costuming, set design, and practical effects and props. What stands out the most, however, is the SFX (sound effects) that elevated the entire experience into cinema. When Jaehyun and Haechan bring out their lasso, the whip is audible; when Jungwoo crushes a heart with his own hand, you hear the crumbling; there’s a swoosh when Yuta performs a high kick, and the gun cock when Taeyong aims at you through the screen draws you deeper into their world of outlaws.

'STICKER' is unabashedly theatrical, both in video and in sound; and its unprecedented take on modern pop music is what makes NCT 127 in a playing field entirely of its own.- Isa Almazan, Contributing Writer

Multi-instrumentalist noise artist Lingua Ignota has done it again. Put out by Sargent House, the classically-trained singer’s track ‘PENNSYLVANIA FURNACE’ from her latest album SINNER GET READY is accompanied by haunting yet stunning visuals, not to mention spectacular production by Kristin Hayter. Not only did Hayter direct the video, she also shot and edited it herself—this is exactly why I am constantly awe-inspired by her artistry.

While CALIGULA was centred around intense industrial noise soundscapes, the Appalachian folk-influenced  SINNER GET READY has a more dialled back and stripped-down sound which is further enhanced by the incorporation of certain woodwind instruments such as pennywhistles. But that’s not to say that this record is any less harrowing—in fact, the lyrical themes are just as heart-rending as it too, deals with Hayter’s deeply traumatic experiences with abuse in her personal life.

Shot in the derelict and rural state of Pennsylvania, the track ‘PENNSYLVANIA FURNACE’ is a minimalistic piano-ballad that was inspired by an 18th-century tale of an ironmaster who throws his dogs in a furnace, only to have them return to drag him down to the pits of hell. This is perhaps why the song begins and concludes with the lyrics “me and the dog we die together.” If you listen closely, you can hear the whistling sounds of an actual furnace on this piece; those atmospherics, layered over Hayter’s pyrrhic vocals effectively turns her individual hellscape and jarring cries of anguish into a body of fine art. - Ynez Wahab, Writer

'RESPECT THE COME UP' - MEEKZ

While some might parade and flaunt expensive cars or jewellery, Mancunian rapper MEEKZ takes it to another level. Directed by KC Locke, who has also helmed the music videos of iconic UK artists like Skepta, James Arthur, and Little Mix - it features the masked rapper sitting on a helicopter as it propels around London’s cityscape, spitting his truth while he was at it.  No stunt doubles or green screens here.

‘RESPECT THE COME UP’ marked the first single MEEKZ released in 2021. It also doubles as a reminder to listeners about how far he has come ever since his first drop ‘Hoods Hottest’ in 2019. Here, he paints a clear picture of how he is now, quite literally “up” - and how you should respect the way in which he did it. - Sabiq Rafid, Writer

As much as I love a grand, all-out music video, there’s nothing like a visual of a candid romance caught on camera to make your heart flutter. Coupled with the song (and Wheein’s amazing vocals), the visualiser feels so personal, like a home movie you feel like you’re not supposed to be watching. I love it. - - Franchesca Judine Basbas, Staff Writer

Our present-day leaders have failed us, and what’s left is the disillusion of people set against lifeless backdrops. ‘Neo Surf’ is the pet project of acclaimed filmmaker Romain Gavras (that M.I.A video, Kanye West, Jamie xx, Justice) and deals in the aftermath of today’s mistakes in poignant fashion, stirring the watcher’s guilt and surrender.

Imagined in 2034’s Athens, the narrative etches on a bygone society remembered for its missteps and failure to progress - hauntingly characterised by its stars in the music video galavanting about pretty, but desolate landscapes. It’s extraordinarily beautiful - but notes from the director imply that this is neither an extrapolation nor post-apocalyptic painting, more a profuse celebration of co-existence between life and death. Together with French electronic artist Surkin’s sonic contribution, ‘Neo Surf’ is all at once cinematically arresting and composed. Except, there’s no time for the latter anymore. GENER8ION has a clear agenda in mind, but what is the answer here? - Leland Tan, Associate Editor

I said this earlier this year and I’ll say it again – BamBam’s music video for ‘riBBon’ is a visual masterpiece! The music video opens with an all-black set before transitioning a whole world of colour and whimsy and it’s just so beautiful.

It looks like a brighter and less distorted, Wes Anderson-esque version of Alice In Wonderland and I am living for it. - Franchesca Judine Basbas, Staff Writer

This might just be a more personal and emotional pick for me but I absolutely love it. I’ve lived in cities away from where my family is all my life and in turn, have never really found where ‘home’ truly was so ‘Split’ deeply resonates with me.

The music video amplifies that message even more. From the video calls to distant family to the isolating scenes of trying to fit in with new friends to childhood pictures plastered everywhere, ‘Split’ just has a special place in my heart. - Franchesca Judine Basbas, Staff Writer

I’m not even lying when I say that I had this music video on loop the day it came out. Beyond the song being extremely catchy, it’s just so jam-packed with so many things to look at.

LISA had, what, maybe 5 to 6 sets? It’s crazy! You definitely had to watch it a couple of times to get every single bit of it (like that ‘POLISA’ detail lol). - Kara Bodegon-Hikino, Staff Writer

I love a good intergalactic concept! ‘Soda’ is already a fun and carefree song to begin with and the music video just adds that extra layer of fun to it all.

Conceptually, the visual is just so out-worldly – a soda machine in the middle of space and a band of mythical aliens giving you “money” to use said soda machine, it’s crazy in the most awesome way possible. - Franchesca Judine Basbas, Staff Writer

With a song title like ‘Pineapple Kryptonite’, you can expect nothing less than a strangely captivating music video. Throughout the whole video, you’re just confused but at the same time, strangely understand everything that’s unfolding – which I think is the charm of ATARASHII GAKKO!. - Franchesca Judine Basbas, Staff Writer

I don’t know what it is but ‘BAD LOVE’ feels like you’re watching a music video of a music video being shot in a distant intergalactic future. There’s something oddly meta about it but that could just be me.

Regardless, KEY’s creative vision really shined in this mini-album with every detail so intricately thought out. From the music videos to the promotional visuals, you could tell that this was a concept that he really cared so much about. - Franchesca Judine Basbas, Staff Writer

I always love when AOMG labelmates make appearances in each other’s music videos, it’s always so cute and wholesome. Not to mention the cameos from PROWDMON’s Monika and Lip J.

Taking on the aesthetic of early 2000s music videos that you’d see on channels like VH-1, ‘Red Lipstick’ is just pure fun in the simplest way possible and that’s something we all need right now. - Franchesca Judine Basbas, Staff Writer

Whenever Korn release new music, I feel like there’s new life breathed into my being. Their visual for ‘Start The Healing’ is your typical band-rocking-out-in-a-white-room-with-cool-lighting-and-weird-CG-animation-things kind of video, but it certainly keeps you on your toes for more to come from one of your most favourite bands in the world. - Kara Bodegon-Hikino, Staff Writer

Check out the rest of Bandwagon's Best of 2021 lists.