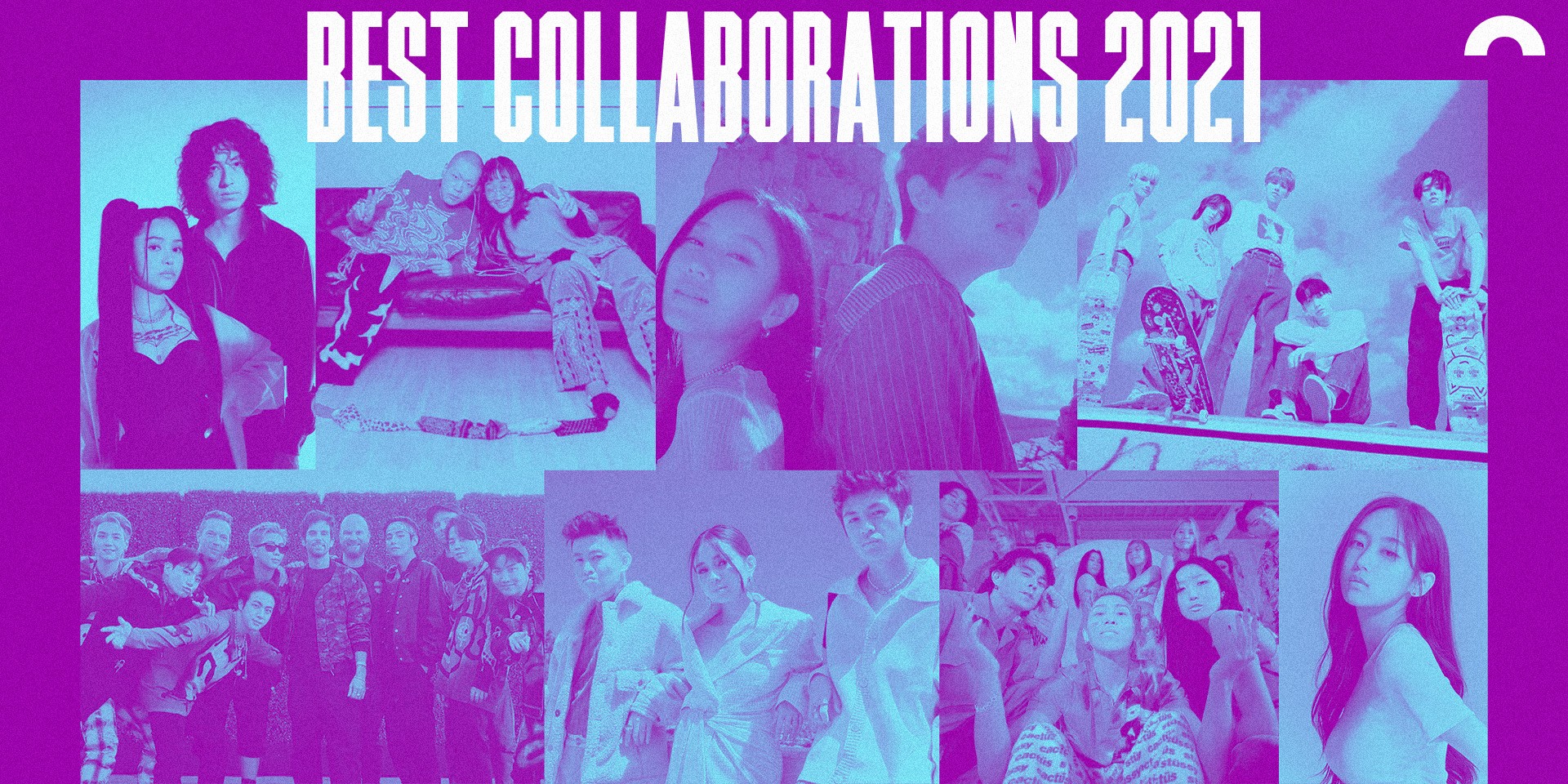 2021 has been a great year for music. Even with the pandemic still looming around us, we've had a huge assortment of music to sing and dance to this year.

In particular, we've seen some of our favourite artists join forces for projects we've only dreamed of. We're talking Coldplay and BTS, Saweetie, Doja Cat, JAMIE, and CHANMINA, Lady Gaga and Tony Bennett, and the list just goes on.

So next up on our Best of 2021 lists, our lovely team—comprising a whole lot of music lovers—have picked out the top collaborations of the year. Check them out below.

In interviews, Chris Martin often candidly shares how the idea for this collaboration came from "Worldwide Handsome Jin". Martin initially thought "How is that gonna work?" until 'My Universe' came to him, and they thought it would be the perfect song to give to BTS. Plans slightly changed when they decided to keep the song, and rope in BTS instead for the biggest collaboration of 2021.

While the track is officially a Coldplay song, with BTS as featuring artists, it definitely doesn't seem that way - they're two of the biggest groups in the world and on equal footing. Coldplay laid down the lyrics, melody, arrangement, and instrumentation, and Martin himself flew to Seoul and spent two days at the HYBE HQ to work with the band. BTS wrote their own lyrics and rap verses, with Martin acting like their mentor, working out lyrics, guiding vocal recordings, and even thoughtfully including an instrumental dance break for when they perform the Billboard Hot 100 hit together.

'My Universe' is a true collaboration - in the sense that it feels very Coldplay, and at the same time, quintessentially BTS. - Camille Castillo, Editorial Director

Without a doubt, Seori’s second collaboration with eaJ, ‘Dive with you’, is one of my most played, favourite releases from 2021. It summons this wonderful feeling of falling in love for the first time, all while being brave despite the uncertainty of what will happen next. - Kara Bodegon-Hikino, Staff Writer

The pure sonic magic that is in this song! From DPR IAN's chill R&B sound to CL's deep and calming voice to DPR LIVE's hard-hitting rap verse – not to mention the production that went behind it all (thank you, DPR REM), it's just beautiful in every way shape and form. 'No Blueberries' served as the second single released from Moodswings In This Order, following the moody and brooding 'So Beautiful'; and while it's far from the mood and tone of the latter, it somehow fits so well together – especially after you listen to the EP as a whole.

'No Blueberries' is definitely my favourite song from the EP, more so after that iconic performance at Head In The Clouds. - Franchesca Judine Basbas, Staff Writer

It was a dry and boring day until I randomly came across ‘Contraband’ by Make Them Suffer and Spiritbox’s Courtney LaPlante. I’d been craving for some good metalcore to bite into and thanks to Spotify’s New Core playlist, I became full. - Kara Bodegon-Hikino, Staff Writer

TOP SONGS, ALBUMS, MUSIC VIDEOS, AND CONCERTS OF 2021 ACCORDING TO BANDWAGON READERS

During “hot girl summer”, this was the only song you’d hear coming from my room. It’s the perfect summer song – it’s laid back yet still could you get up on your feet (everybody say: "Thank you, DPR REM!"). Not to mention that DPR LIVE’s addictive sing-rap style, Beenzino’s vibey rap verse, and of course, Hwasa’s goddess-like voice just work so well together. - Franchesca Judine Basbas, Staff Writer

‘I’ve Got You Under My Skin’ - Tony Bennett & Lady Gaga

Lady Gaga and Tony Bennett’s take of ‘I’ve Got You Under My Skin’ is breathtaking, to say the least. It’s fancy and classy and hits you in all the right places. - Kara Bodegon-Hikino, Staff Writer

Easy-going, pinches of avant-garde, and a peppering of provocativeness, the joint single of Korean-American DJ and producer Yaeji and HYUKOH frontman OHHYUK births a track that’s oozing in escapism and melancholy, whisking listeners first into the mumble soft-spoken delivery that both have been so fondly lauded for. The DJ’s enveloping production chops are drenched in broken beats and low-key soundscapes, with OHHYUK further claiming verses and providing the necessary sentiment to drown ‘Year to Year’ in a dreamy endeavour. If the accompanying music video isn’t already a moving presence, both artists’ anecdotes on their time spent together writing it should do the trick. - Leland Tan, Associate Editor

One of the most intriguing people I discovered in 2021 was Bella Poarch. I’m not on Tiktok, so I only heard of her when she dropped ‘Build A Bitch’ and my fascination for her grew immensely from there. So when she announced ‘Inferno’ with SUB URBAN, I was all ears. I positively adore her dark sense of pop-tinged with the na-na-na’s of menacing children singing in the background. She works wonders with SUB URBAN—they’re a fantastic team—and I can’t wait to see what else they have to offer. - Kara Bodegon-Hikino, Staff Writer

There’s just something so hilariously relatable about the line: “It’s so hard to be a person, I just want to be a chair.” The song in itself is just so adorable.

Sonically though, ‘Fresh Feelings’ is just pure magic – from the way that Singaporean singer-songwriter Benjamin Kheng’s soulful pop sounds seamlessly transition to Taiwanese rapper and singer J.Sheon’s soothing R&B voice to the introduction of a gospel choir. As if it couldn’t get any better, the stripped-down version is so beautiful. - Franchesca Judine Basbas, Staff Writer

Don’t get me wrong, the original was great, I love how it takes you back to the pop-punk era, the anger, the desperation and the fire that TXT brought to the song. Not forgetting how impressed I was by Yeonjun’s versatility and Taehyun’s raspy growls in the track contrasted by Seori’s beautifully delicate vocals.

The rap verses from H1ghr Music acts pH-1 and Woodie Gochild, gives it a slightly more mature version of teen angst, while its stripped-down, acoustic, and raw instrumentation brings out that hopelessness that the track didn’t have in the original. - Rachel Yap, Digital Media and Projects Manager

‘Just like this’ is just "wholesome" in a song. It’s so comforting and warm, and reminds you of simpler days. Granted I can’t understand the lyrics, but you can feel a tinge of nostalgia the moment it starts playing, you can’t help but smile. - Franchesca Judine Basbas, Staff Writer

Filipino acts Nadine Lustre, James Reid, and Massiah have their own distinctly different sounds that theoretically shouldn’t really work but somehow, they piece together the perfect puzzle. Adding their individual flavour, ‘Own It’ comes as a dynamic soundscape of fun, freedom, and energy. It feels like a song you’d blast from your car speakers in the dead of the night as you try and party till the sun comes up. - Franchesca Judine Basbas, Staff Writer

As if my favourite TikTok song couldn’t get better! This is definitely my hype anthem. There’s something so pleasing and empowering about four powerful female acts –  three of whom are Asian – banding together.

Can we also talk about the fact that JAMIE can rap and how CHANMINA had bars in three different languages? - Franchesca Judine Basbas, Staff Writer

'California' may be a summer anthem to most, but it’s really a life anthem for me. The track will definitely resonate with people who have moved out of their home countries to make something out of themselves elsewhere, me included. It’s really a common struggle trying to make it on your own in a city where you don’t know anyone and have to be really independent, it’s a whole experience.

Written and performed by three acts out of Indonesia, it kinda gives you the hope to keep going and be able to reach that same feat as well. The track also exudes that chill laid back Californian vibe but the messaging of the song is something serious and real for so many people. - Rachel Yap, Digital Media and Projects Manager

Arcane is one hell of a ride with a killer soundtrack that doesn’t disappoint. The entire 11-track compilation is fantastic but, MIYAVI and PVRIS’ ‘Snakes’ strikes as hard as Vi’s denting blows. - Kara Bodegon-Hikino, Staff Writer

There’s been a couple of releases between Korean and Japanese artists this year, but this one was particularly interesting to me. When I first heard this as part of the Shang-Chi soundtrack (before even catching the actual movie), I was blown away.

Zion T and Gen Hoshino may come from different places, speak completely different languages, and even perform different genres, but their voices complement each other so well.  The duo conveys the same emotions and transcends these barriers through the language of music. - Rachel Yap, Digital Media and Projects Manager

This is the second part of Bandwagon's Best of 2021 lists. Watch out as we unveil our top albums, EPs, music videos, and virtual concerts from this year.