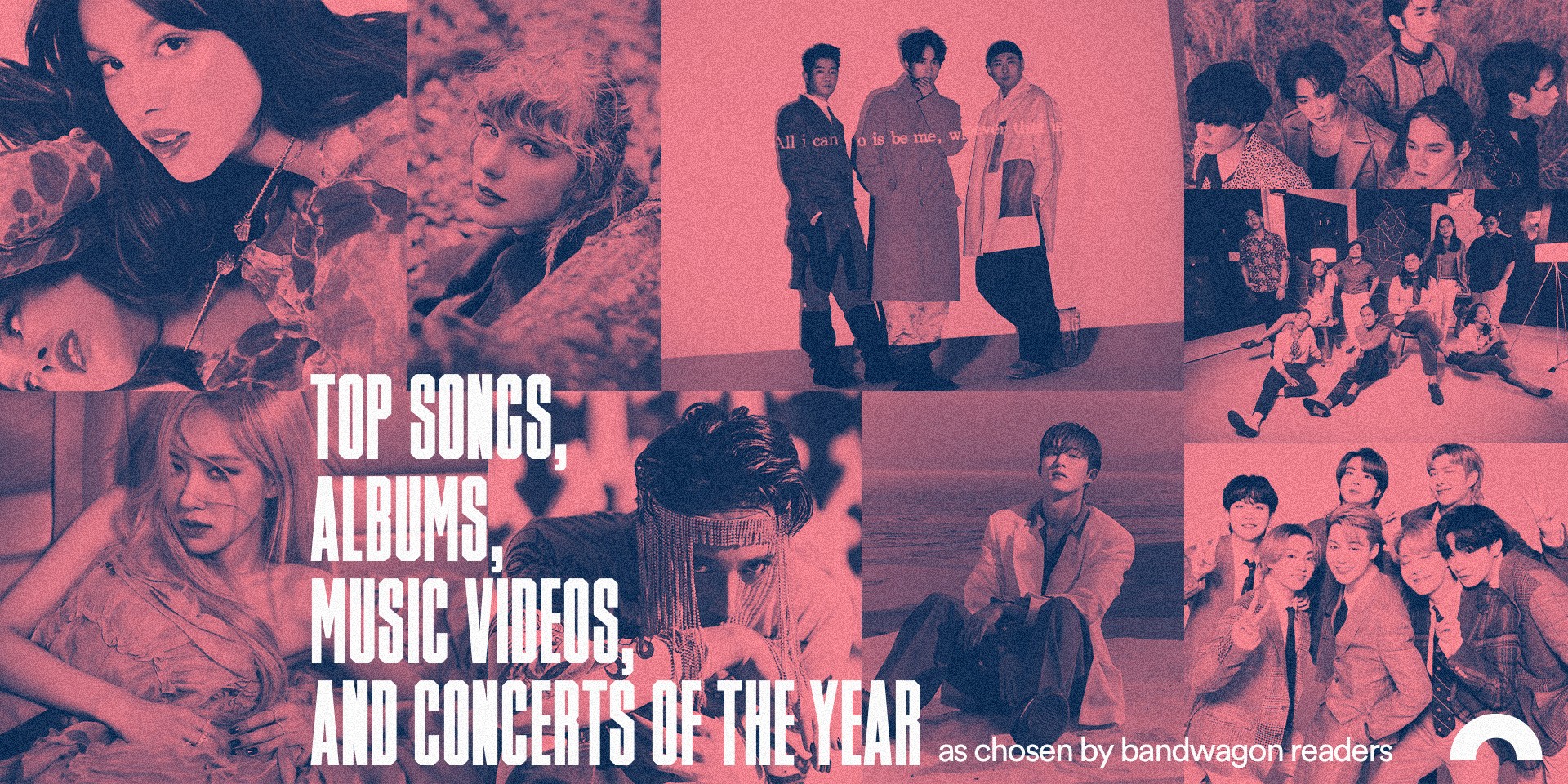 2021 is coming to a close in just a few days, so it's time to look back at your favourite music from this year.

Over the span of three weeks in November, more than a thousand Bandwagon readers took part in our new annual survey, choosing their favourite songs, albums, music videos, and virtual concerts that made 2021 what it is. We left it all up to you to hand-pick each of these entries, and boy did you get organized!

We asked, you delivered, and now here it is—the top releases of 2021, according to Bandwagon readers:

It's impossible to ignore the unified power of A'TIN. In one quick sweep, SB19's legion of dedicated fans dominated the Top Songs list for 2021, inputting every track off of the group's Pagsibol EP and their very own FELIP's solo offering 'Palayo'. South Korean rapper B.I. joins the P-pop act on this list with his singles 'Illa Illa' and 'Cosmos'.

Check out Bandwagon readers' top 10 picks for Top Songs of 2021 (in alphabetical order) below:

2021 has certainly been a good year for new music, specifically full-length albums.

B.I.'s sophomore offering Cosmos and rising superstar Olivia Rodrigo with her breakthrough album Sour are also albums our readers absolutely loved. Of course, Swifties stayed true to their queen, bringing both of Taylor Swift's re-recorded albums (so far), Fearless and Red, on this list.

There will always be room for the world of K-Pop when it comes to new music to love, and this year Epik High delivered with their tenth studio record EPIK HIGH IS HERE 上 (Part 1), along with ENHYPEN and their debut album Dilemma, and CL with her praised solo album ALPHA.

Check out Bandwagon readers' top 10 picks for Top Albums of 2021, displayed alphabetically, below:

Fans love seeing their idols looking their best, and as A'TIN proclaim, there isn't a greater music video from 2021 than SB19's Billboard Hot Trending Songs chart-topper 'Bazinga' and the group's comeback offering 'What?'.

B.I.'s 'Cosmos' and 'Illa Illa', FELIP's 'Palayo', as well as BLACKPINK member ROSÉ's 'On the Ground' and BTS' record-breaking 'Butter' are also some of our readers' favourite visuals. ALAMAT join the list with their music video for 'Kasmala', alongside fellow P-Pop acts Press Hit Play with 'WIN' and 1stOne with 'Oh'.

Check out Bandwagon readers' top 10 picks for Top Music Videos of 2021, alphabetically, below: While we've all been staying safe indoors, the live music industry has been trying to find its footing in the midst of this ongoing pandemic. For the most part, it's been successful in delivering online concerts straight to our screens and elevating all the things it could do for future shows.

There have been countless virtual concerts that streamed all across the globe, but Bandwagon readers have chosen SB19's Back In The Zone, 131 LIVE PRESENTS: B.I FIRST ONLINE CONCERT, and SB19's back-to-back concert with 4th Impact, Forte: The Pop Orchestra as the best online shows they caught this year.

Check out Bandwagon readers' top 3 picks for Top Concerts of 2021 below:

Check out the Bandwagon team's top picks for 2021 here.