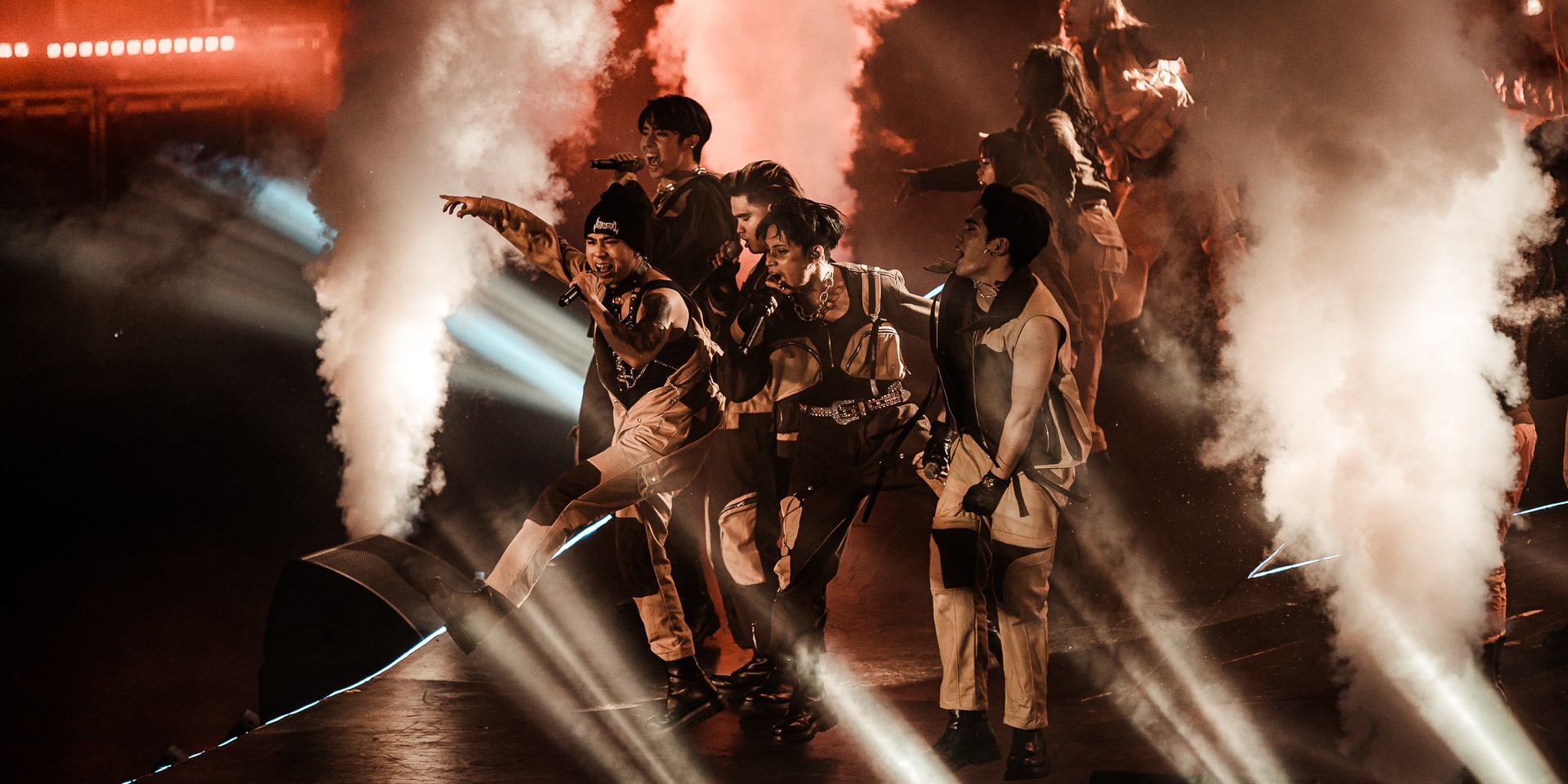 For many of us, it's been a while since we've been inside Araneta Coliseum (unless we were getting vaccinated); but for this writer – who spent most of her life outside of the Philippines – an almost-empty stadium was the first she's ever seen of The Big Dome.

It wasn't exactly the energetic venue I've heard so much about, with empty seats, quiet hallways, and social distancing protocols. But, going through the curtains to see flashing lights and a colourfully adorned stage was enough to get your heart pumping with excitement. We were there to see SB19 on the second and final day of their Our Zone Concert, the culmination of their month-long anniversary celebrations. While a lot of the group's audience was online, tuning in from Zoom and KTX, the 30 or something people amongst the stands filled the stadium with as much energy as they could. More so, the fans outside who SB19 went out to greet before the show. The concert began with an opening performance from Josue, rapper and SB19 leader Pablo's brother (who was jumping and cheering on from the pit). Filled with adrenaline and excitement, the 'agos' act set the tone just right for what was going to be an energy-filled two-hour show. Timer counting down, the music rising, and anticipation building, It was finally time. Our first live concert in two years.

SB19 broke through barriers to get where they are today. From five simple aspiring singers to now, one of Filipino music's biggest talents, the members have come a long way and their opening performance proved just that.

Literally breaking through from the shadows to the spotlight, SB19 set the stage blazing with their opening performance of 'Mana'. The group then greeted the crowd, welcoming everyone to Our Zone. In true SB19 fashion, the P-pop stars also thanked A'TIN for not only joining them that weekend but for the last three years.

Like most artists during these pandemic-stricken years, SB19 have not seen their fans in a long time but you could tell (I'm pretty sure through the livestream too) that they were grateful for what they could get – a few faces in the crowd, cheering them on and waving their lightsticks. Wanting to thank the A'TIN properly, the five-piece brought down the energy to perform 'Tilaluha'. Throughout the years, we've all been impressed by the group's impressive and intricate dance moves but their emotional ballad proved they're more than just an explosive ball of energy.

With Stell's high-note that has you completely in awe, Ken's booming voice that echoed through the arena, Justin's sweet vocals that just have you in a trance, Pablo's emotive bridge that has us on the verge of tears, and Josh's enchanting harmonies, this was the purest showcase of SB19's raw talent.

Just before raising the energy back up, the members remember where it all began with a more hopeful and heartfelt rendition of their breakout single, 'Go Up'. SB19 then invited on stage "their brothers" The Juans to give a medley of some of their greatest hits and a rendition of 'Anghel' dedicated to the 'Hanggang Sa Huli' act.

The boys then joined the pop-rock band on stage to play a hilariously competitive game of Hayop Ang Tunog, where they tried to sing a song using only animal noises. From the game show segment, SB19 return to their performer selves to bring back the 2000s with a mashup performance of NSYNC's 'It's Gonna Be Me' and 'Bye Bye Bye'. All before jumping into a vibrant performance of 'Where You At?', their unreleased all-English retro bop.

Going into the last leg of Our Zone, SB19 shake The Big Dome with a performance of 'WHAT?' – complete with a never-before-seen dance break that quite literally shook the entire arena. Following that was their adrenaline-fuelled performance of 'Bazinga'.

Full of power and precision, you could clearly see the product of days of preparation. Before starting Our Zone, SB19 promised to set Araneta on fire and that they did. After a virtual spiel full of hope, SB19 – clad in pastel suits – return to the stage to give thanks with their cheery performance of 'SLMT' and bring some festive cheer with 'Ligaya'. Consider all that the calm before the storm (of tears) because our hearts were definitely not ready for their emotional performance 'MAPA'.

In the middle of the track, the members' families surprised them on stage, sending everyone into a fit of tears – particularly Ken, who for the longest time had never his family on stage with because they were working abroad.

"Eto po yung MAPA namin (This is our MAPA)," said the teary-eyed members as they powered through the remaining chorus of the song. It's been a rough ride for the group. Through years of rigorous training and a myriad of hurdles, SB19 have only recently seen the fruits of their labour, having immense success in the Philippines and gradually growing to international acclaim.

Wanting to ease the hearts of their family, who have been worrying alongside them all these years, SB19 says, "Malakas na kami diba, kaya na natin (We're strong now you see, we got this)." By the end of the concert, the two-hour-long spectacle felt less like a celebration but a statement.

SB19's three-year-long journey thus far has been a tough one, filled with many doubts, anxieties, and fears.  But over the weekend, as they stood there on one of the biggest stages in the country, the group proved to their fans, their parents, their haters and maybe even to themselves that they're more than the challenges they've been through since the beginning of their musical journey.

Our Zone was a testament to all that they've achieved so far and what more they could do.