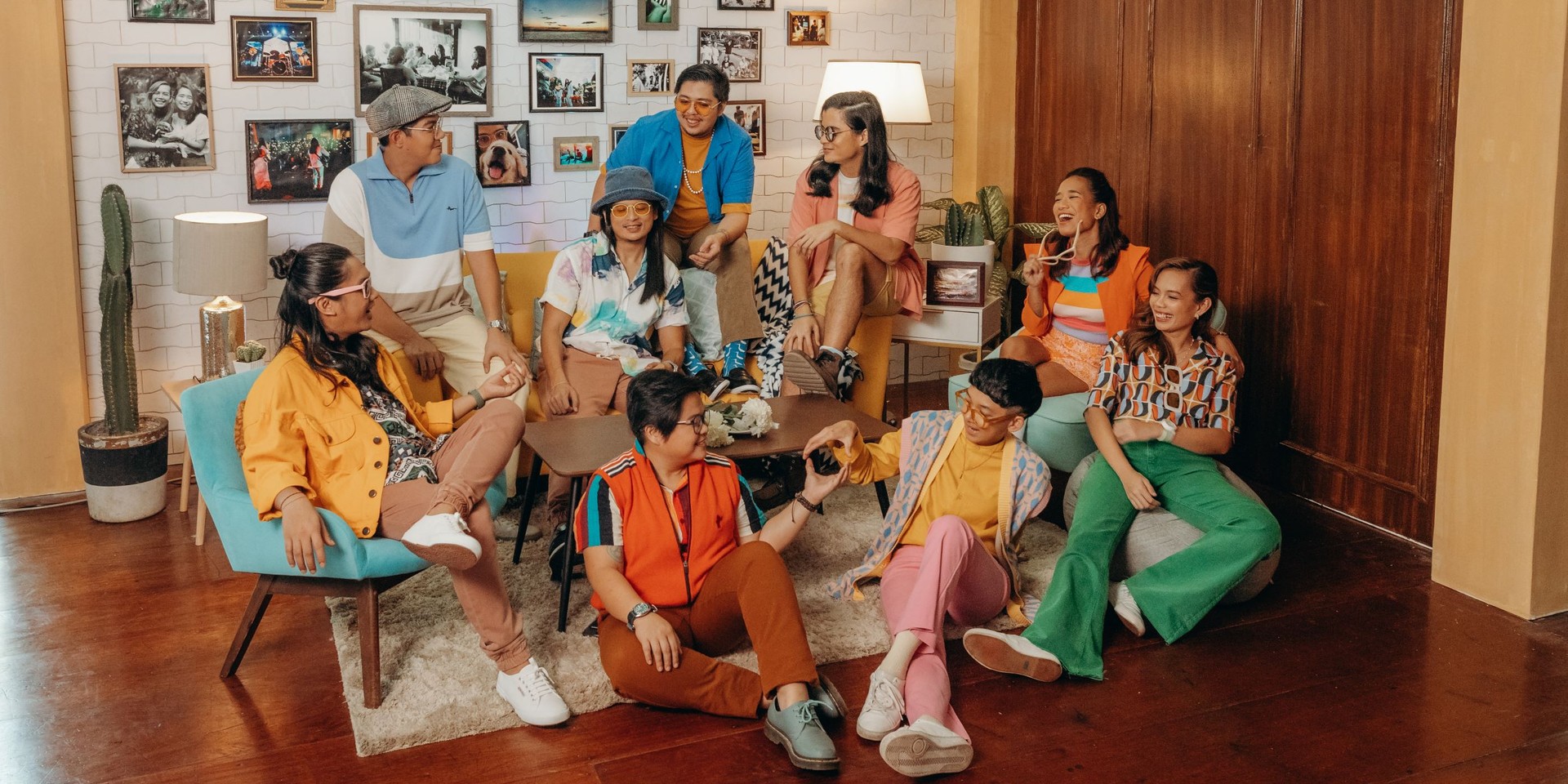 Ben&Ben are back with their sophomore album!

A record similar to that of a warm embrace and the feelings of comfort and relief, Pebble House Vol 1: Kuwaderno comes as the latest chapter in the Filipino folk band’s story.

Set up to be the first of multiple instalments of a much larger project, the album explores a multitude of feelings, experiences, emotions, and stories that make up the spectrum of daily life. From self-acceptance to politics, Kuwaderno dives into new themes and topics that have yet to be heard from Ben&Ben, sprinkled with the classic and heartfelt tales of romance that we have come to love.

Sonically, the album also sees a new side to the nine-piece outfit. With each member leading production for a specific song, the expansive record boasts an array of sounds and musical styles, telling of all the members’ individual musical influences and backgrounds, as well their star-studded lineup of featured acts.

Asia Spotlight: Ben&Ben talk about making music with purpose, living together, and their sophomore album

While the album was put together in the span of a couple of months, Kuwaderno is the culmination of years’ worth of experiences and adventures.

“There’s a popular Facebook kwento where it’s like this mechanic fixes a really big boat while hammering it once but it took him several years to know how to hammer it once. And it was very much like that for this album,” Ben&Ben tells Bandwagon.

“We spent a good chunk of time taking in what life had to give, and when it came down to recording it, it just showed itself and hammered itself together.”

Positioned to be a 'kuwaderno' or 'notebook' that documents their daily life and adventures together as a band, especially living together during the pandemic, the album spans 13 tracks – 4 of which were released ahead of the release.

One of them being ‘Sugat’ featuring Munimuni. A track about healing and growth, the song was produced by Keifer Cabugao (violin) and co-written by Toni Muñoz (percussion) and Paolo Benjamin (guitar, vocals). When asked what it was like working with the fellow Filipino band, Ben&Ben shared how it was a challenging yet fun process, even recalling spending two hours putting together the song’s flute solo.

"It was such a pleasure working with Munimuni. it was really refreshing as well. We all go way back, gig days at the bars, art events and music festivals. We’re all huge fans of them! I’m so glad we finally had the collaboration we dreamed of," said Keifer in a previous interview with Bandwagon.

‘Pasalubong’, which was co-produced by Andrew de Pano (percussion), was also released ahead of the album drop. The heart-wrenching love song comes as the band’s second collaboration with Moira Dela Torre following the singer-songwriter’s 2020 track ‘Paalam’.

“Moira’s songs are so serious and ‘in your feels’ but who she is as a person, is so funny and sabaw. During the recording, ang bilis ng change niya from this really sad, emotional singer to suddenly laughing cause she has to burp or something,” says Andrew.

“Working with her is always such a fun time for us cause we get cookies, she bakes us cookies most of the time. She also cooked us Filipino bistek, which was really good.”

Also on the album is 'Swimming Pool' that features Parokya Ni Edgar's Chito Miranda. Worked on by Jam Villanueva (drums) and Miguel Benjamin (vocals, guitar), the track is Ben&Ben's first dive into an indie rock sound, latent with electric guitars and upbeat drums.

“Knowing Chito as a pro na and a vet in the scene, sobrang inexpect ko na sobrang sisiw sa kanya but the whole session, he kept asking kung tama ba yung approach and Migs and I were like ‘It’s perfect’ (laughs). The character na inilabas niya for the song was just perfect for the message of the song, ang ganda,” says Jam.

Adding to their rainbow of stories and sounds, the band enlisted SB19 for their powerful anthem, 'Kapangyarihan'. Tackling themes such as politics and the misuse of power, this track comes as the band's farthest departure from their usual songs, both sonically and thematically.

This also comes as Ben&Ben's latest collaboration with the P-pop group following the band version of SB19's 'MAPA', which they worked on after 'Kapangyarihan' despite being released first.

"It was a challenge because we did ‘MAPA’ via Zoom, so there was that barrier when we were recording. But by the time we shot the video which was completely live, we already had a bond and the chance to connect, so we entered the project as friends already," said Paolo.

When asked how it was collaborating with SB19, who boasts a radically different sound and musical style, Paolo says, "It was really special to experience collaborations in its purest form which is witnessing how their different style of creating works well with our own."

"We really saw the stark difference in culture and even in the terms they use, but when we came together ang lumabas ay something that we have all have never done. We’re really thankful that we got the chance to make that happen."

“All of the artists we worked with are really busy so when they get a chance to come over, aside from hanging out and recording, they also get to relax. So, with SB19, we’re glad that the Ben&Ben house was a safe place for them to just be themselves, have fun and relax. And when you have that place to breathe, that’s when the creativity comes alive. So it was very laid back but when it was time to record and write, iba talaga yung prowess nila, they really came in with the bars,” he adds.

Zild and juan karlos also join Ben&Ben's roster of collaborators, each with their own distinct personality and artistry that made its way to their pensive track 'Lunod'. The track, which was co-produced by Agnes Reoma (bass), shines a light on mental health especially in a time of isolation.

Beyond their record session, Agnes shared how the main highlight working with the two acts came after the song was done.

“After their recording, we had a mini gig at around 1 am. We just passed around the guitar and people were sharing songs na unreleased pero ngayon released. Like JK’s ‘Boston’, we heard it dito first at parang hindi pa siya sure kung gusto niya kunin yung kanta. Si Pat nun tulog, gumising siya nang mga 3 am kung patapos na (laughs)," she says.

Joining Ben&Ben's lineup of collaborators is KZ Tandingan and their stripped back and intimate track 'Sabel', which was co-produced by Toni.

Described as "an almost acapella" song, 'Sabel' also comes as a new soundscape for KZ who has always been known for being a vocal powerhouse.

"Nakakatuwa kase yung arrangement ng ‘Sabel’ is bare and direct to the point so actually before that call, wala kami binigay ng direction or brief sa kanya, we just gave her demos and talked to her before the recording. Even without telling her kung ano yung intention namin sa song, siya mismo nagsabi na hindi niya gusto lagyan ng mga kulot kulot kase hindi necessary. She really took on the character of the song," says Toni.

Ben&Ben also brought in renowned Filipino string quartet The Manila String Machine for their track 'Elyu'.  Inspired by the street in the Philippines' La Union, the track serves as the first time the band has had an entire string section in their discography.

'Elyu' also serves as a special bonding experience for the band, shared Pat Lasaten (keys) who led the production of the track.

“What made it so special was, before we brought in The Manila String Machine, Keifer wrote the lines for the first violin, and I based the rest of the string section on what he did. And the highlight moment of working on ‘Elyu’ was recording Keifer’s part, I felt like we really bonded and we managed to find the right lines together,” says Pat.

“Yeah! Alam ko kase si Pat may gusto na siyang gawin so when I heard her say to just do what it is I do, I was like ano gagawin ko at medyo na pressure ako but it worked out. I felt like we really balance each other out,” adds Keifer.

When it came to choosing their collaborators, Ben&Ben left it solely on their music to decide.

“At its core, each song really focuses on its message and is just really about the stories of the artists that we work with, both musically and personally. So it was really based on the song, before we knew it, we had half a collaboration album. In a way, we let the song decide,” says Paolo.

With so many moving parts, hearts, and minds together under the same Pebble House, the band shared how it was a "funny challenge" to put the album together.

"When we were starting and we had a vague picture of how everything would play out, we really were figuring out how it was going to work and how this album was going to sound," says Andrew. "We really just trusted the process and trusted that the fact we’re us will make it sound like us. So, we really banked on our band chemistry for this and thankfully, it worked."

“What also tied in everything together was the core messages of each song and the whole message of the album, which is the kuwaderno ng buhay namin ngayon and how we want to share that with people. Not any two songs sounded alike, and we did worry about whether they all fit in the same album and make sense together but when you listen to it, you’ll be able to connect the songs together and see the whole message of what the whole album means to us,” adds Poch.

Documenting a journey of life, love and loss, Ben&Ben hope that Kuwaderno can serve as a source of healing, comfort, and joy for their fans both during these trying times and later down the line.

“Because we named it Kuwaderno, the album is like the notebooks we’d have back in highschool and college where throughout the year, kung ano ano na sinusulat mo, just whatever thoughts and insights you have. Our notebooks went from a place of work to journals, and they are things that you look back to years later and remember that that’s what you were like at that point in time," says Andrew.

"While it is still that point in time, we really want to be here for our listeners and journey with them through all the really weird things happening these days, all the difficult feelings and very pivotal life happenings."

When asked what they hope fans get out of Pebble House Vol 1: Kuwaderno, the band simply says:

Years down the line, when they look back to this album, we hope they remember where they were and how much they were worrying and think to themselves, ‘thank God, I made it’.