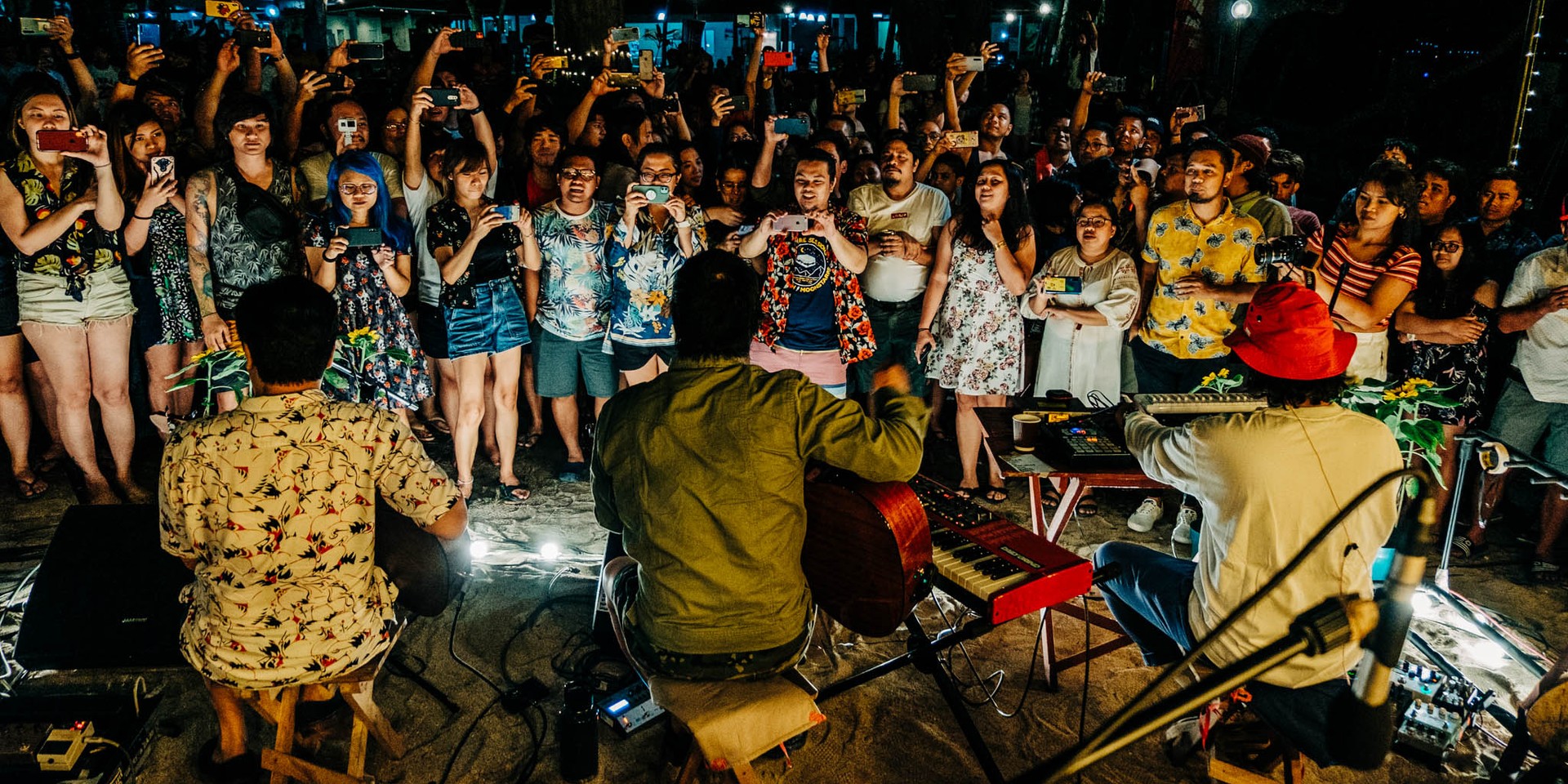 I first heard of Campfire Sessions a couple of years ago, when I came across YouTube videos of Typecast performing acoustic sets around a bonfire. I thought that was a pretty cool concept, especially since I've always been a fan of gigs in alternative settings (for context, I've been to and organized music events on boats and buses, in a museum and a hole-in-the-wall record store).

Last year, I saw videos on my Facebook feed, clips of an Ely Buendia and Kamikazee-led singalong of everyone's favorite inuman jam, 'Huling El Bimbo' at the beach. It was an organization called Green Turismo behind the unique live music experience. 1/2 of this duo is the Typecast bassist whom we got the chance to work with when his band opened for emo legends American Football: Chi Resurreccion.

When they announced Sandwich and Moonstar88 as their featured lineup for CS6, I went out of my way to ask Chi if we could still cover it, knowing slots were almost immediately filled up. I got to know the other half of GT, May Valentino. "All our Campfire Sessions® are made extra special and magical. From day one, we made it a point that the experience will leave lasting memories not just to us but to all our campers, and the artists we feature. Each has its own unforgettable and extraordinary moment that keeps this event worth attending to."

On Day 1 of the 2-day affair, campers who opted to take the CS6 transportation gathered at 6 AM for the drive to the secret location in Batangas and then, later on, met up with campers who chose to take their own cars at Malabrigo Lighthouse. We didn't make it to Olo-Olo Mangrove Forest and Ecopark in time for lunch with the rest of the campers, so we decided to head straight to the venue - Submarine Garden Beach Resort.

"Apart from featuring two bands for the first time, it is also worth noting that this recent one is in a closer venue geographically," Chi shares. " Lobo, Batangas is just 100 kms away from Metro Manila, vs Sagada (480 kms), Aurora (380 kms), and Zambales (210 kms), so it's way easier to manage, logistically. Given the short distance drive, we were able to do more in terms of stage design, visited more tourist spots and spent more time to appreciate the beauty of the town." 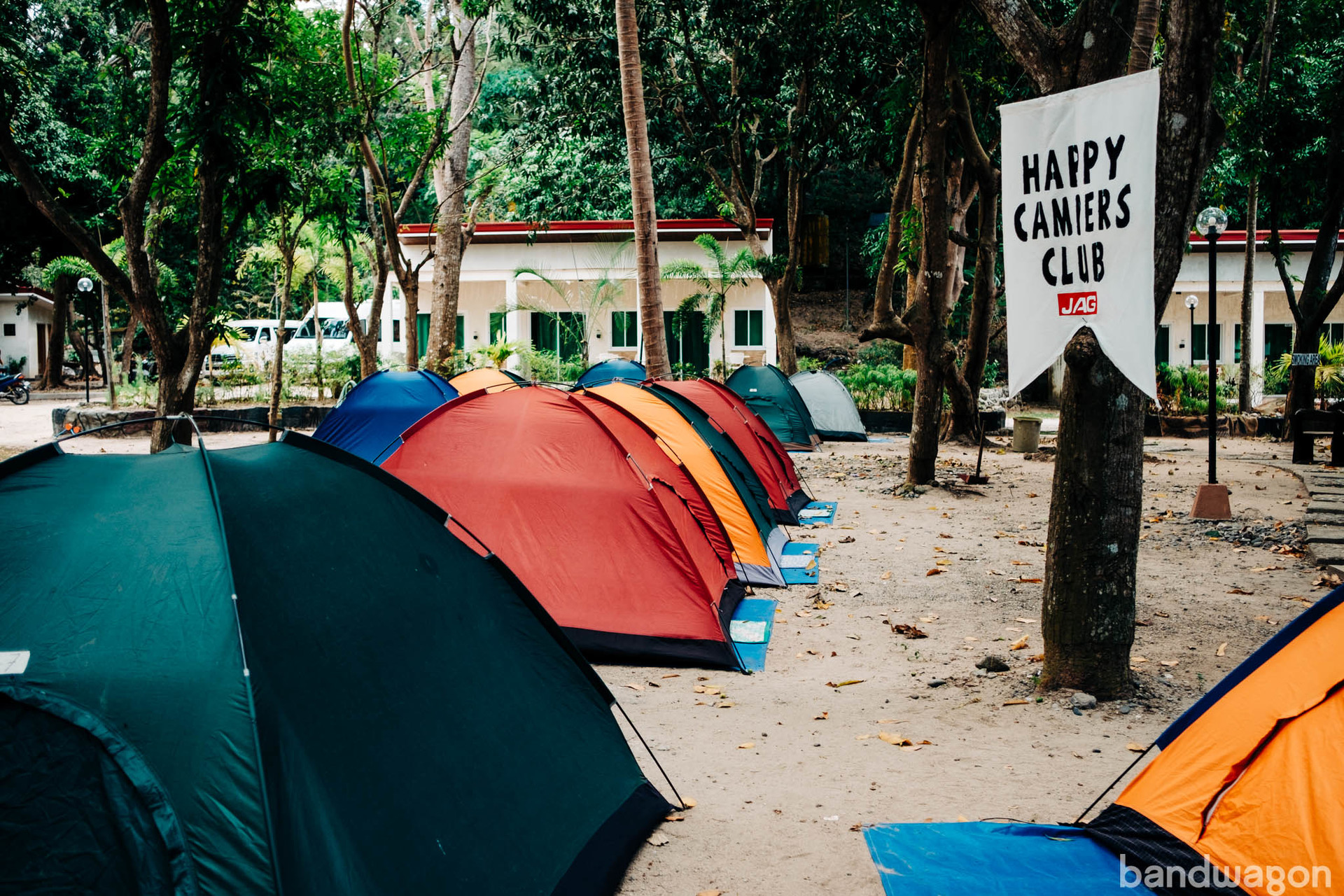 When we arrived at the resort, the D&D Custom Guitars crew were busy setting up the stage. We were welcomed by D&D's Renzo Sarco, who shared with us that they've been supporting Campfire Sessions since it's inception in 2016. Daren Lim, 1/3 of Squid 9 and the other D in D&D, was also present to show his support and make sure everything was in order from setup to soundcheck. "It has been such a rewarding experience working with Chi, May, and Green Turismo. It makes us want to help them grow the show more each year. As a fan, it is truly exciting to see these artists perform in different destinations," Daren added.

"D&D has been there since day one and they've always been family to me. Both Daren and Renzo are fun to hang out and work with. I remember back in 2016 when I was setting up Campfire 1, I was problematic cause I only had a week to go before the event, but my band Typecast didn't have a decent acoustic guitar and bass to use. So I reached out to Rayms (the first person I saw using and endorsing a D&D Guitar) if he can help me connect with them," Chi shares how he started working with D&D. "Then 10 minutes later he texted me Daren's mobile number and told me to call Daren. The rest is history. That is the exact moment where our relationship with D&D Guitars started and they've always been there to support us." 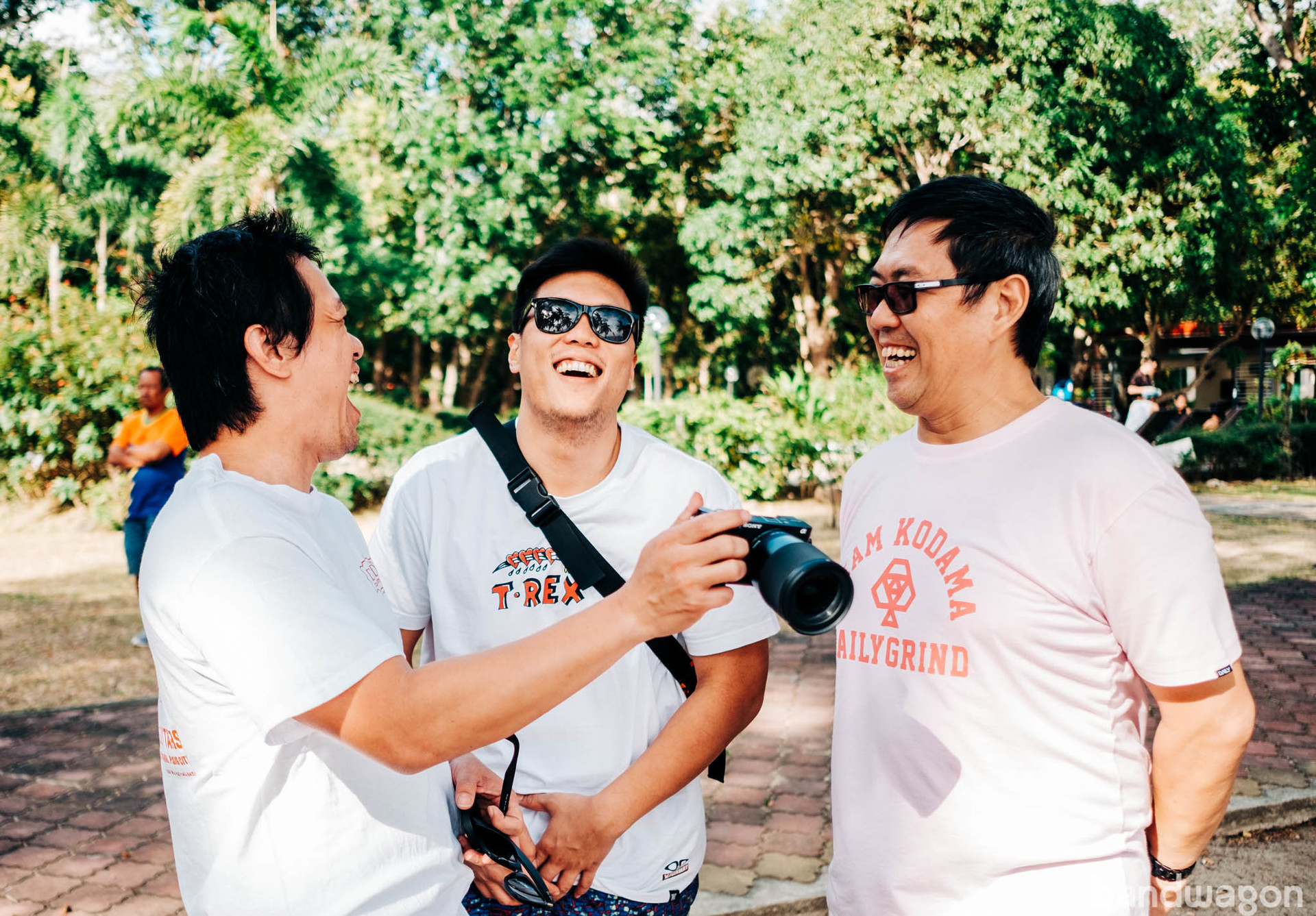 Chi also talked about the challenges they face in planning an event this scale, which is "A lot (haha)! Every session is a great challenge whether it's budget, camper, or venue related. You have no idea how challenging it is for us to scout a potential place and keep it a secret for months. We don't want to disappoint our campers, so we only choose the best spot that we could find. Imagine bringing hundreds of music fans outside Manila… the transportation, food preparation, accommodation, security, everything is a piece of a challenge and we put a lot of effort into it so we can satisfy not just our campers but also the artists and ourselves."

The campers soon arrived, got settled into their respective tents and rooms, before heading out for the day's planned activities - a songwriting session with Sandwich frontman Raymund Marasigan and gear talk with guitarist Mong Alcaraz. 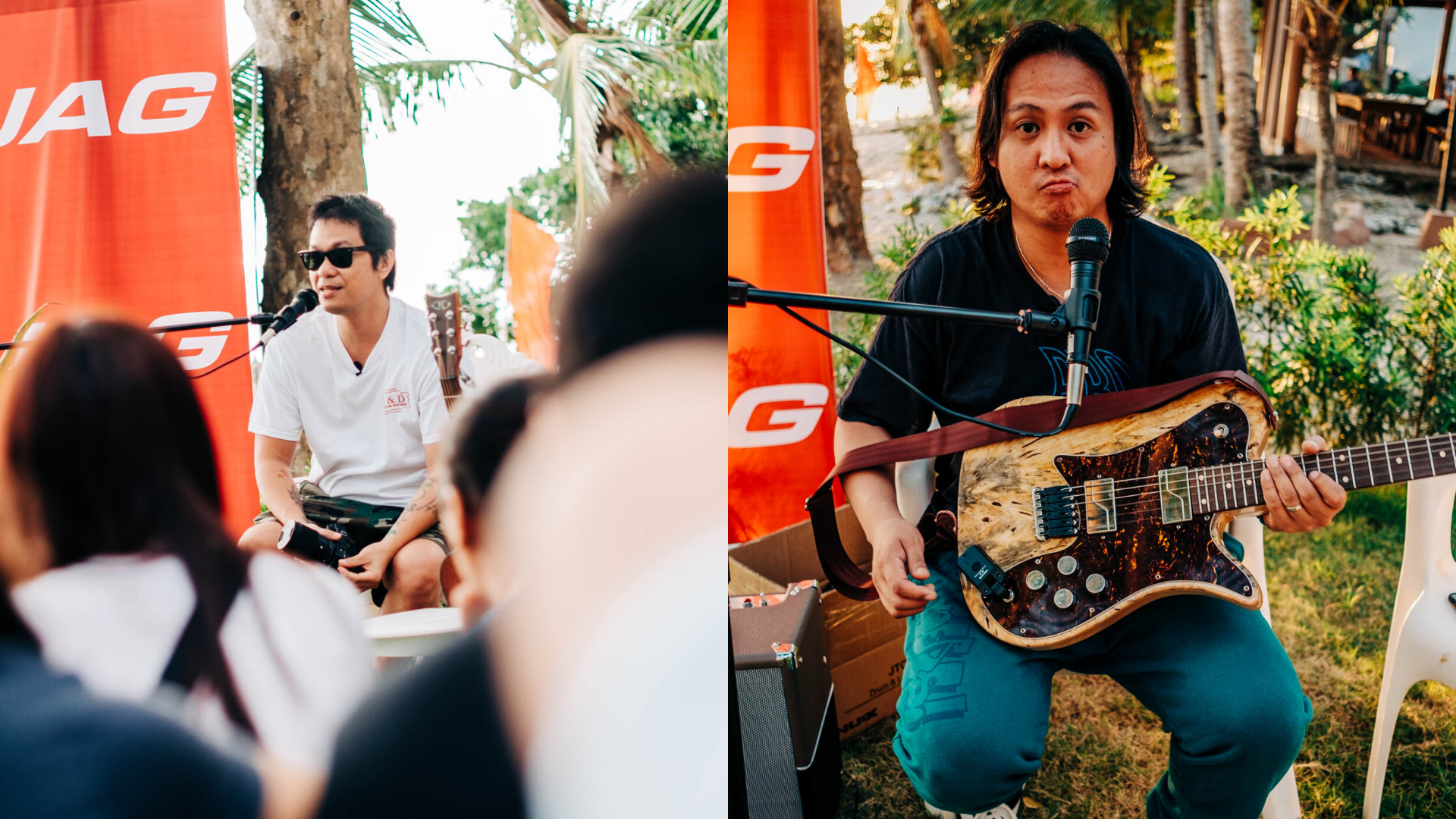 Campers got the chance to ask the technical questions they've always wanted to ask. Some lucky aspiring musicians got to share their music and in return, received advice from Rayms and Mong. 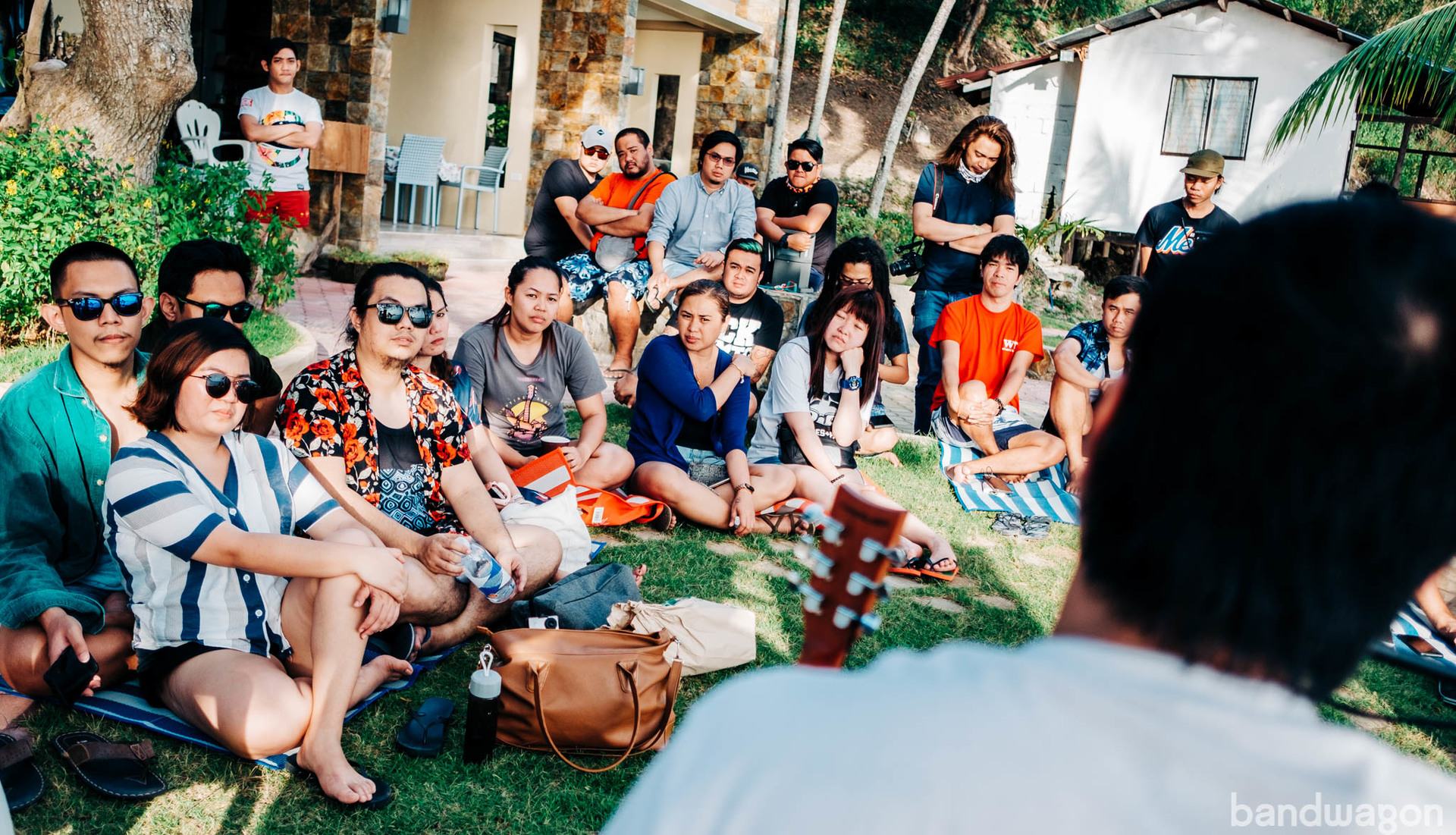 As the sun set and the night drew closer, campers spent their free time lounging around the resort - taking a stroll along the shore, swimming in the pool, and laying on the grass with a cold beer in hand.

After dinner, campers got ready to take their designated spots around the bonfire and in front of the sunflower-filled stage. May, with the help of Jun Sabayton, gave out prizes from the camp sponsors and explained the house rules, including a reminder to enjoy the show, minus cellphones. It then started drizzling and campers were asked to take shelter and wait for the rain to stop.

As soon as the skies cleared up, campers returned to roast marshmallows over the growing bonfire, while the rest continued to snack on their baon and sip their beers. 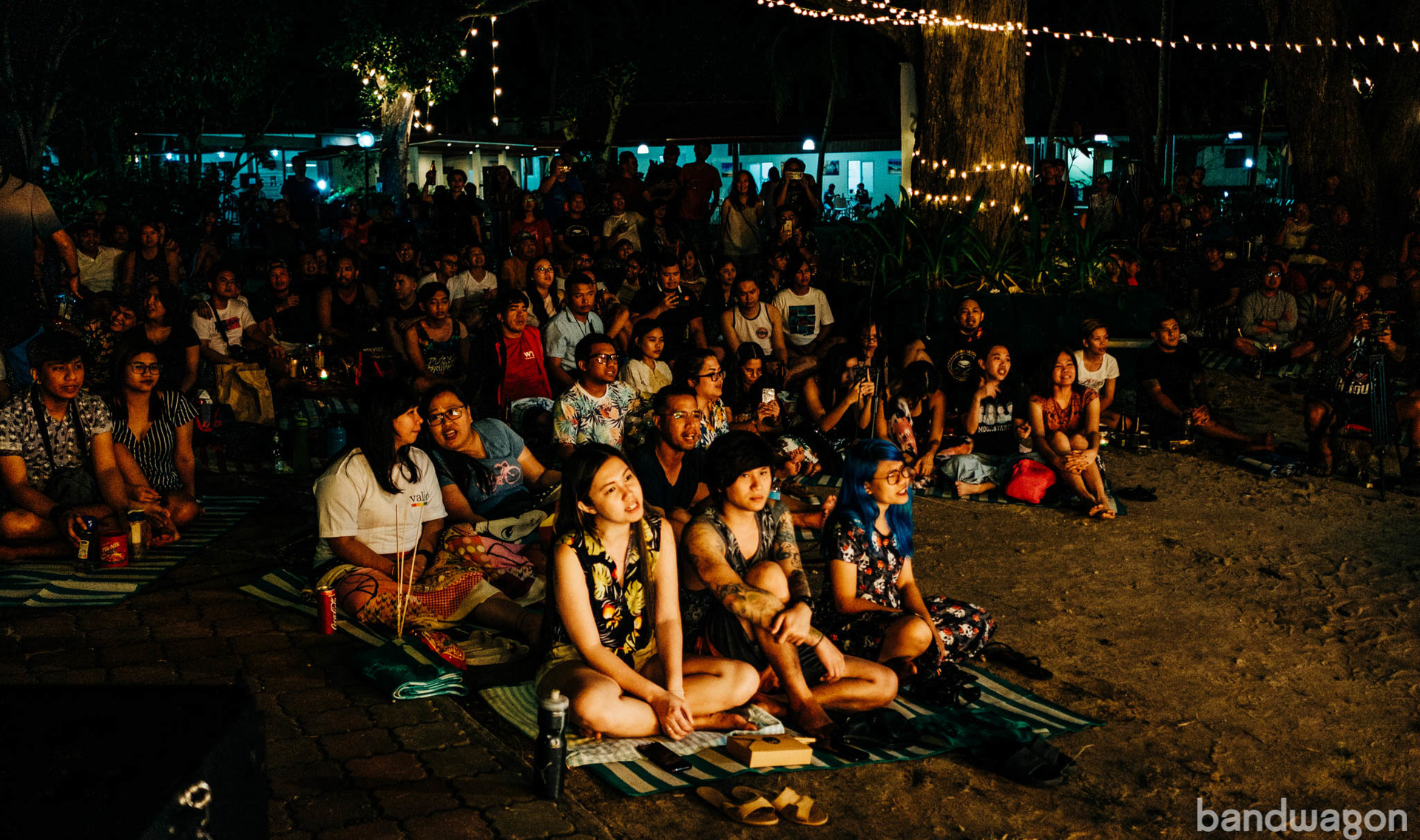 It was finally time for the show. Moonstar88 kicked off the night with 'Gilid', before launching into some of their biggest hits, 'Sulat,  'Migraine' (one of our readers' top karaoke songs, the massive singalong was enough proof), and their rendition of the APO Hiking Society original, 'Panalangin'. 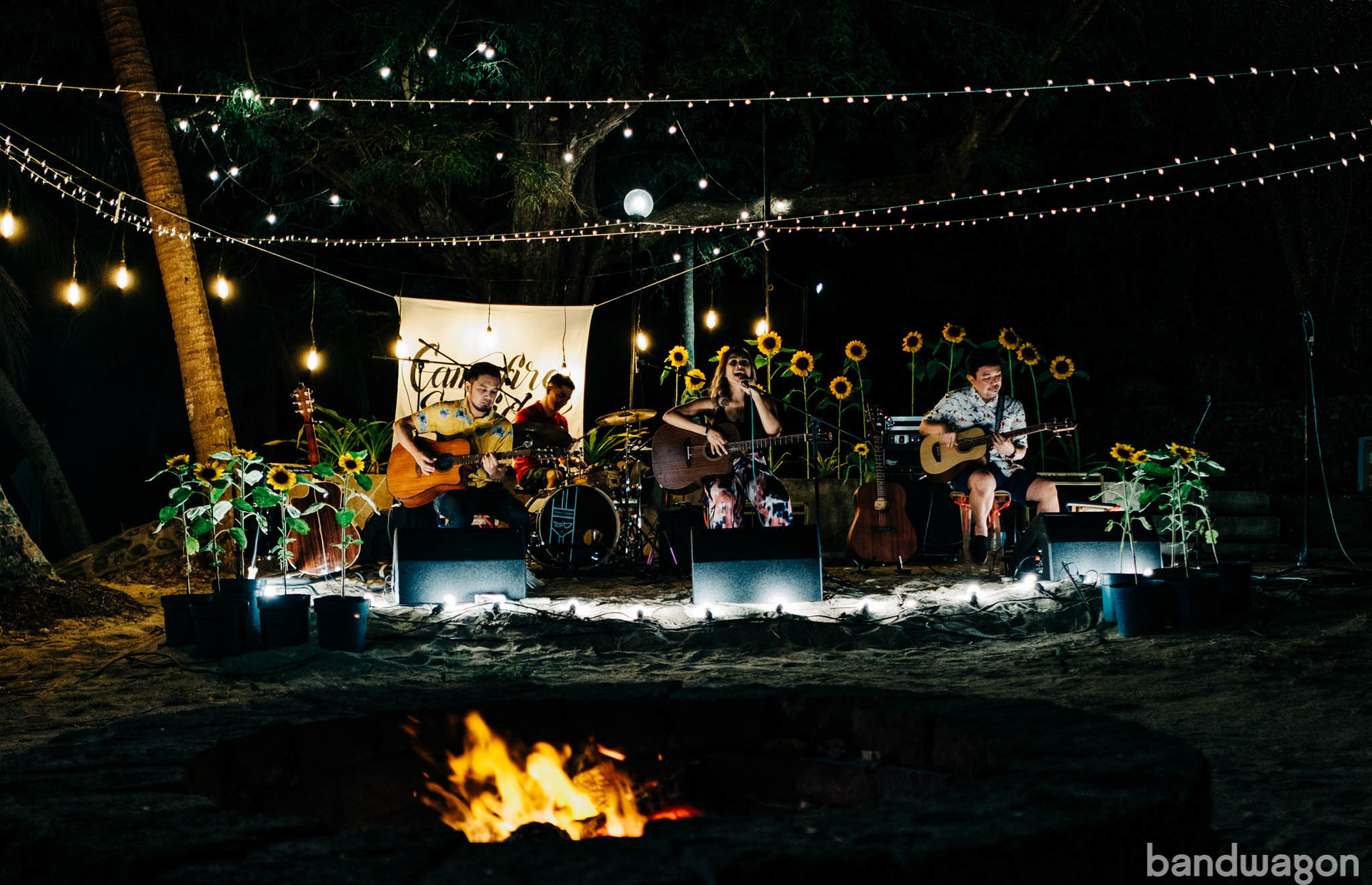 Mid-set, vocalist Maysh Baay shared that they've been waiting for years to get on the Campfire Sessions lineup, and it was a nice change to play an intimate set for their fans, whom she fondly referred to as Moonstareros.

As a treat, the band also played two unreleased songs for the first time - 'Parola,' which means lighthouse in Filipino, and 'Next Week'. Maysh shared that after recording 'Next Week' with Shinji Tanaka (who was manning the boards for the show), "Naiyak talaga ako [dito], pag-labas ko ng studio, umiiyak ako." 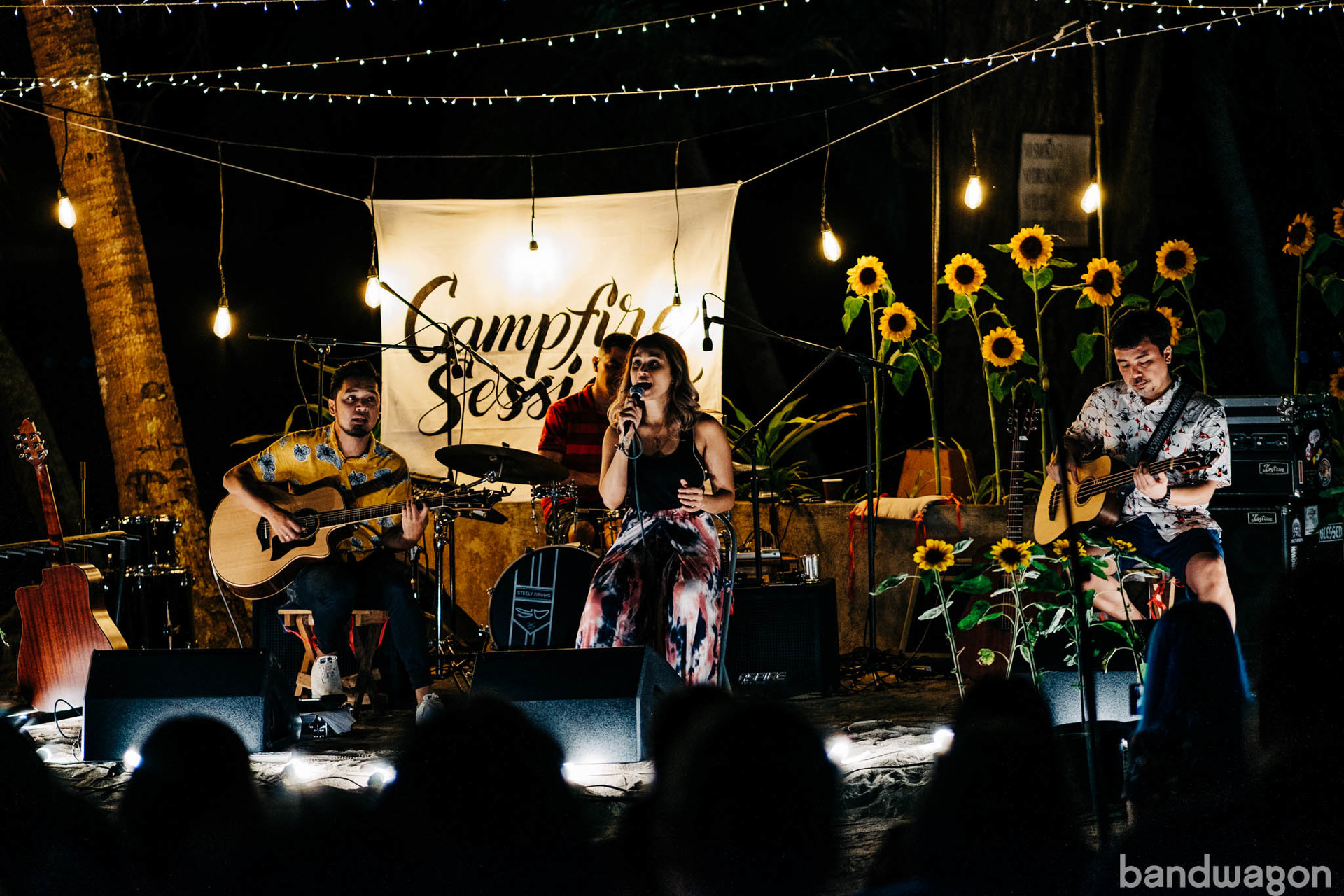 The band continued with 'Itulog', 'Torete', 'Sa Langit', 'Senti', and 'Ligaw', before launching into a three-song encore. 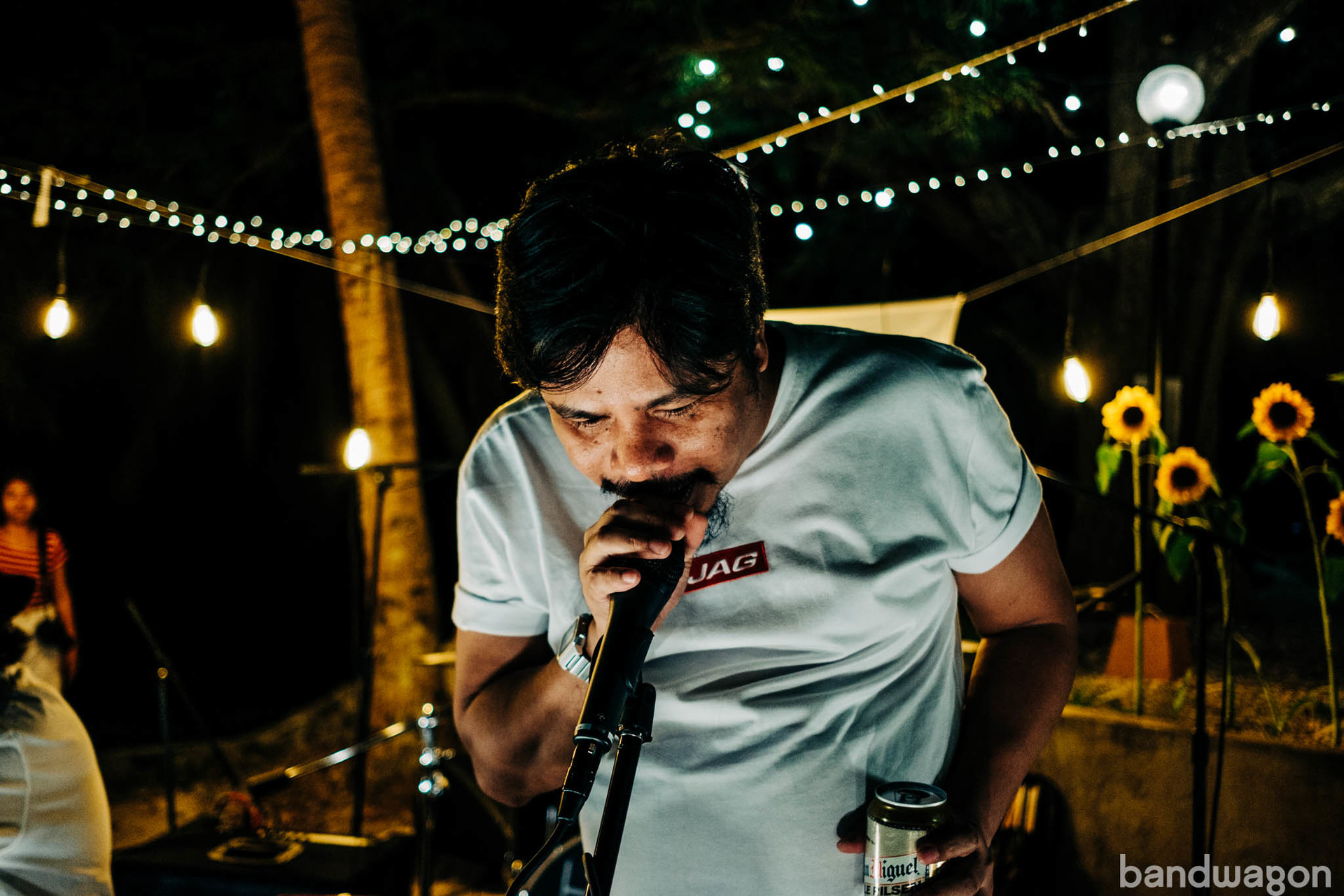 After a 10 minute break filled with more prizes and drinks, Sandwich took the stage and opened their set with a rare stripped-down version of '2 Trick Pony', prompting an "under the glow of the satellite" singalong. 'Betamax', the band's ode to their musical heroes was up next, followed by 'Buhangin'. The five-piece also played two new songs, which they recorded at a beach house in Batangas last December - their latest single 'Buhol Buhol', and an unreleased track called 'No Goodbyes'. 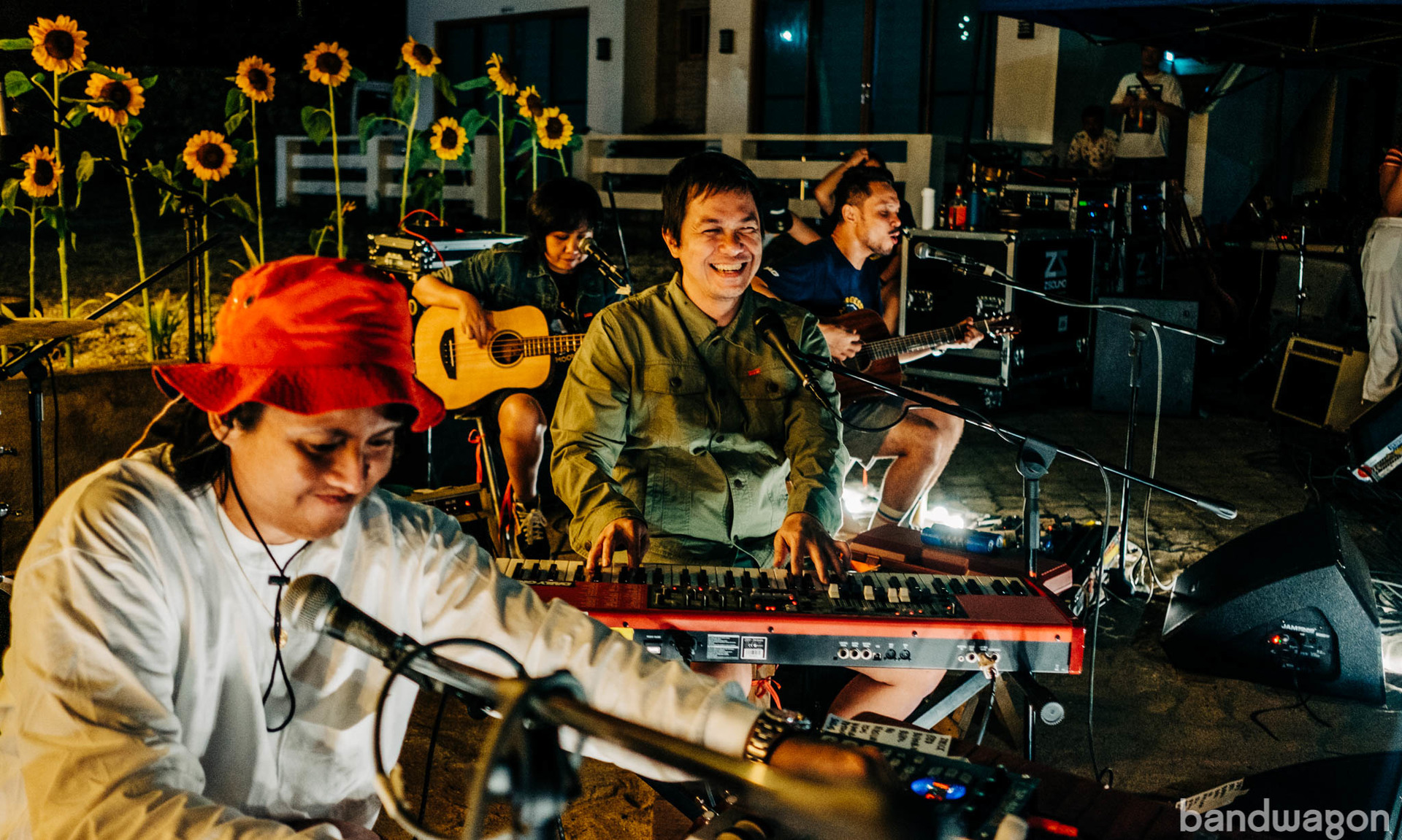 Sandwich played 'Masilungan' and 'Selos', before granting Chi's request for 'Butterfly Carnival', a Thanks to the Moon's Gravitational's Pull classic which wasn't originally on the night's setlist. A birthday salubong surprise was set up by the campers for guitarist Diego Castillo, who was celebrating his birthday the next day. Diego blew out his candles and the band treated fans to their own request, 'Sunburn', a summer and road trip staple. For the next 4 minutes, Sandwich brought us back to 'Manila', before diving into the b-side of their 20th anniversary single, 'Parang Walang Nangyari', a personal favorite. 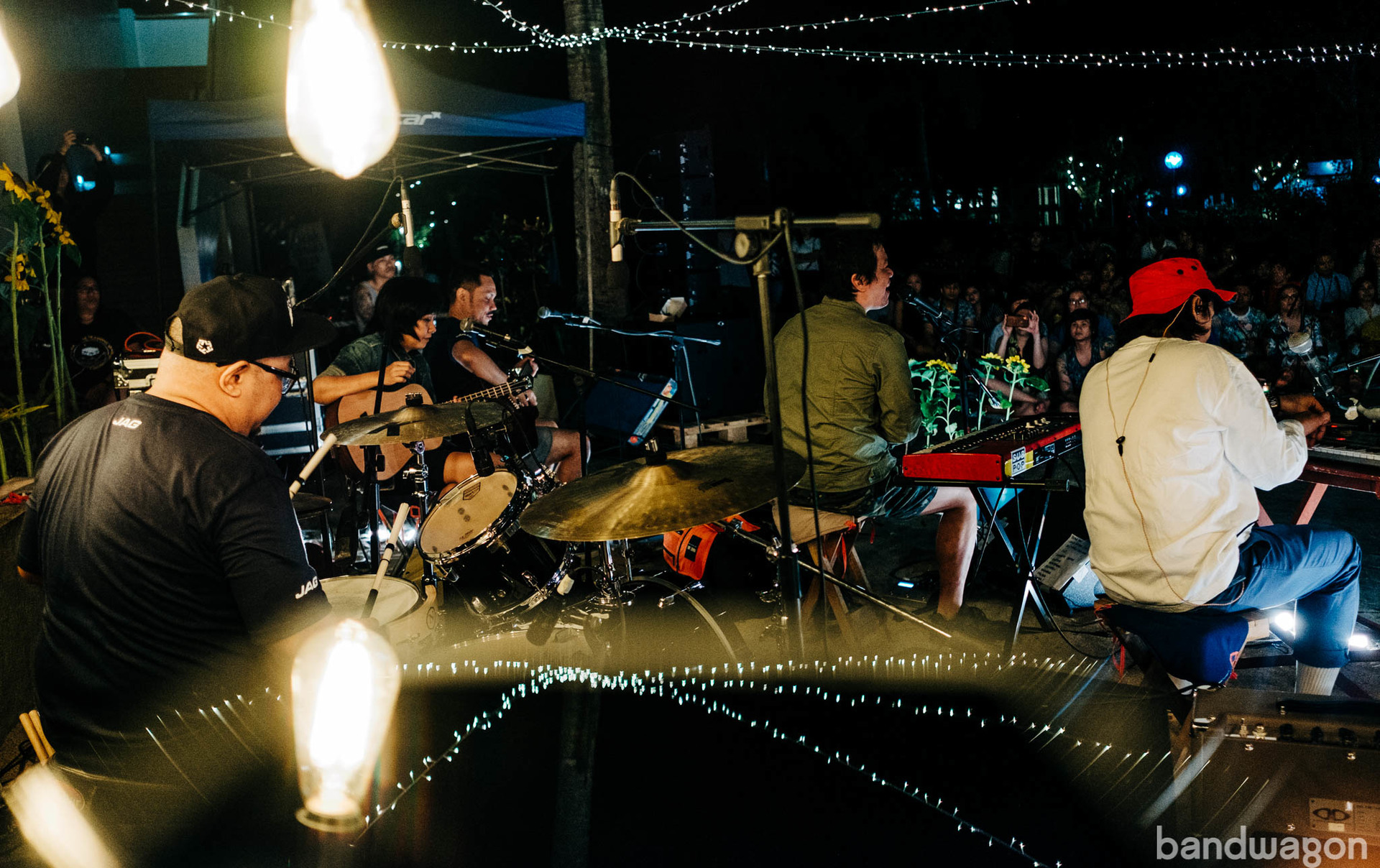 Mike Dizon stood up and left his drum kit, while Myrene Academia and Diego set aside their guitars and walked offstage. Moonstar88's Bon Sundiang, Maysh Baay, and Buddy Zabala joined Rayms and Mong on stage, before the familiar chords of the Eraserheads' 'Minsan' filled the saltwater air. Before we knew it, the campers gathered around the stage and sang along. 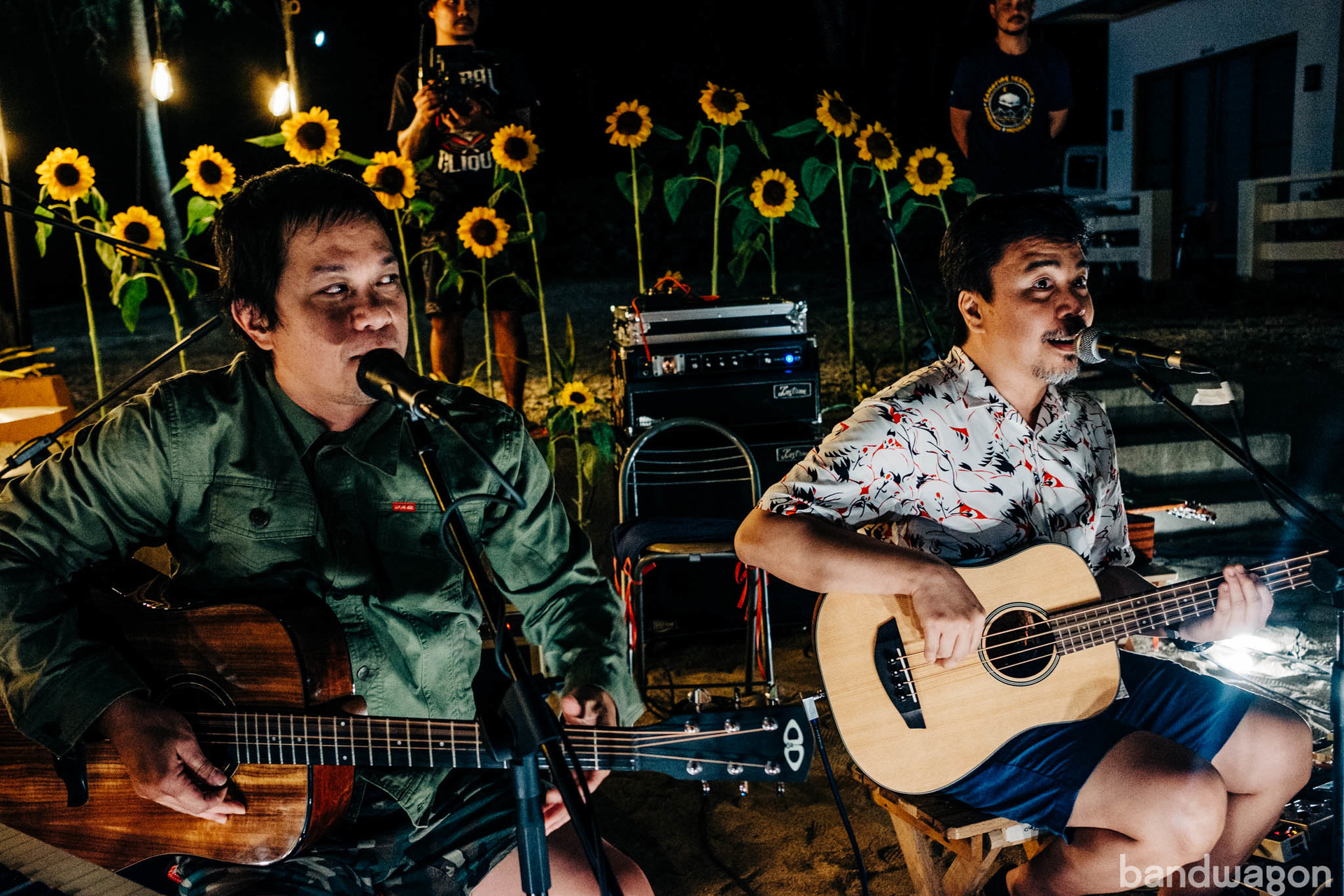 I saw the magic of 'Pare Ko' unfold as Rayms and Ultracombo led the massive singalong. For the next song, 'Sembreak', Shinji was called on to take over the drums, Herbert Hernandez on guitars, while Maysh sang on vocals. The campers continued to sing their hearts out, providing the second voice for Maysh's lead. 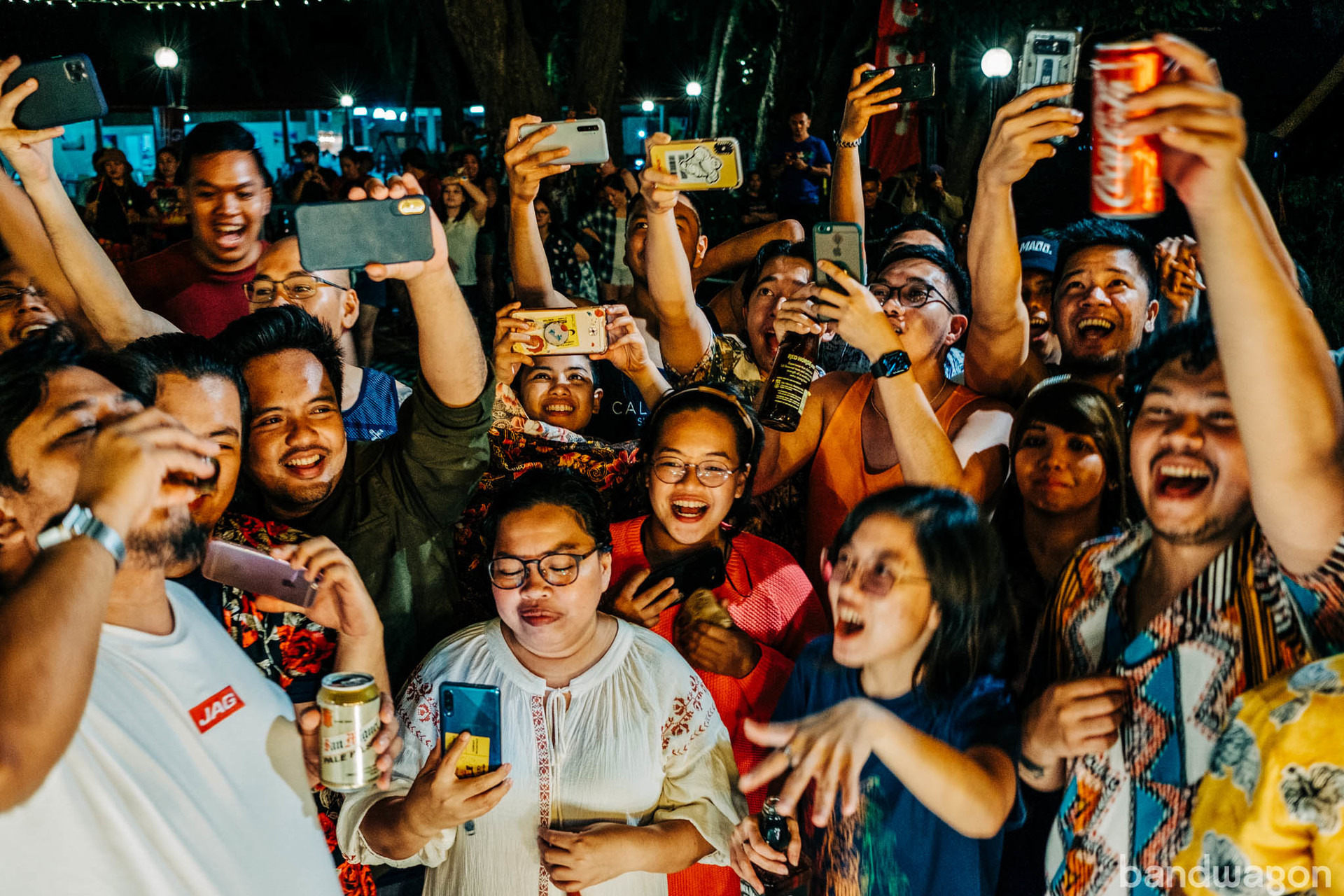 Ultracombo ended their surprise set with 'Alapaap' with Bon and Chi sharing the mic for lead vocals, while Maysh, Rayms, and the campers sang back up. 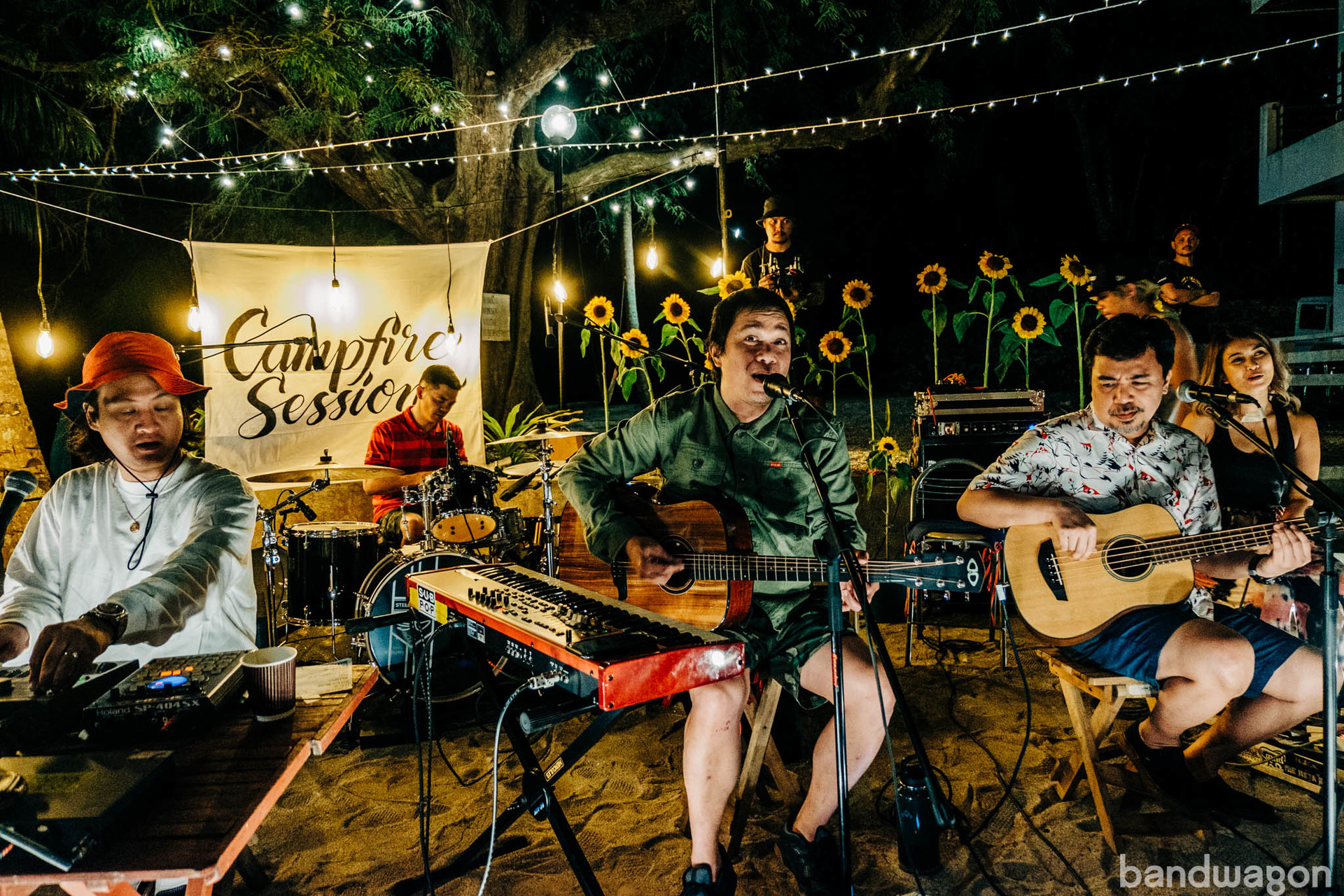 The night of music didn't end there. Campers took to the stage to share their original music, as well as covers of songs by local acts like Ben&Ben, Juan Karlos, and IV of Spades. One camper, who flew in for Dubai just for the show, also sent us back to our emo days with her own renditions of Avril Lavigne, Dashboard Confessional, and of course, Typecast. The open jam lasted till the wee hours of the morning, even after the D&D crew packed up all the gear. Conversations over beer and whiskey continued throughout the night, with old campers making new friends. 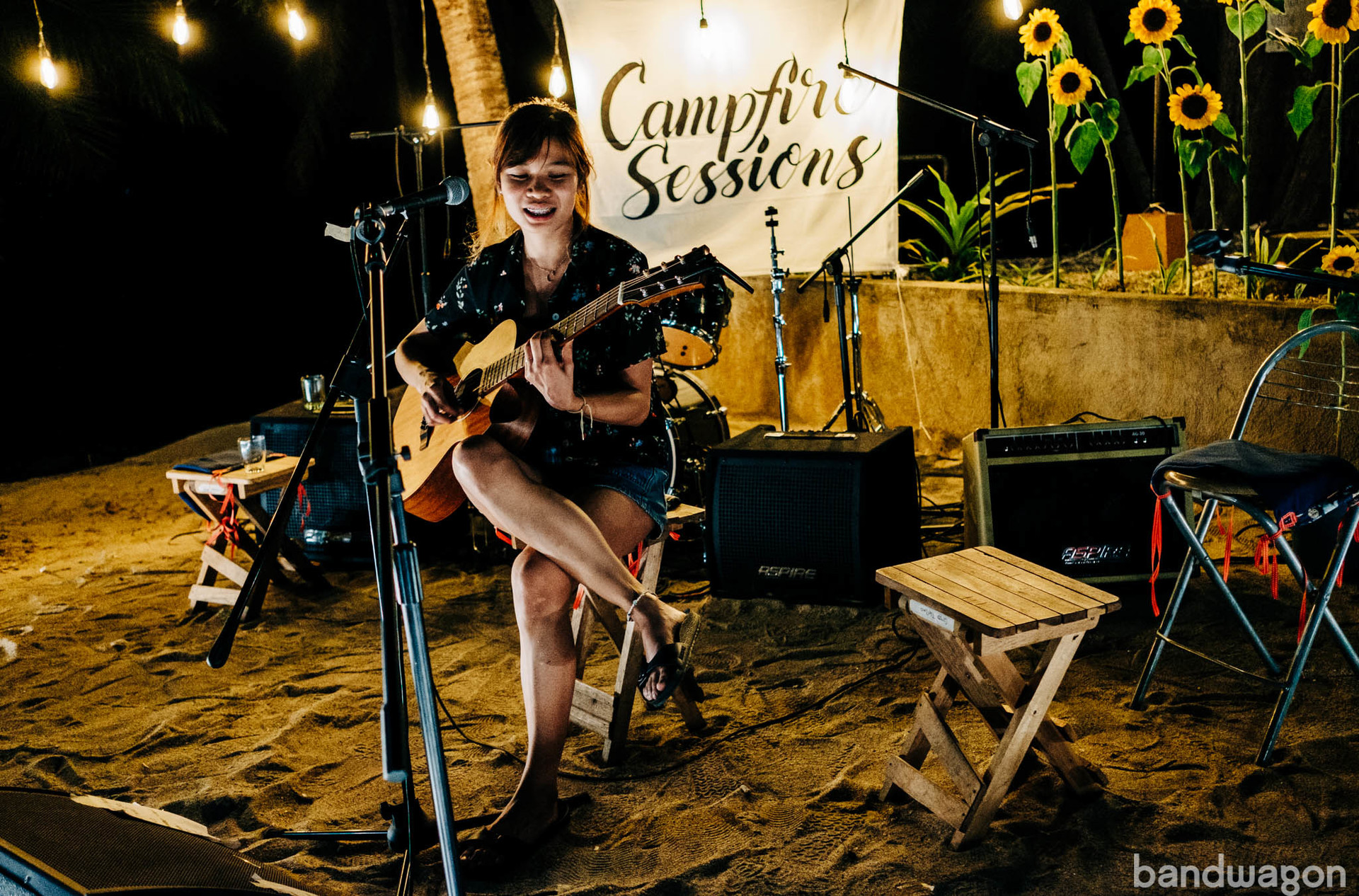 The next morning, the early birds took advantage of the sunny weather and cool breeze to take a dip in the pool, jump into the sea, and just hang out under the coconut and Talisay trees on the beach. There was an energetic buzz over breakfast with campers sharing stories from the night's shenanigans.

I ran into some campers while walking under the trees and asked them about their Campfire Sessions experience. All three of them were returnees, one of them was part of all the shows, minus the first one in Sagada. They shared that they've always loved Filipino music and always looked forward to CS announcements. When asked if they would still go to CS7 if the lineup was kept a secret, they said "Kahit sino pa yan, alam namin mag-eenjoy kami. Ganun yung tiwala namin kela May at Chi."

"What sets us apart from other concerts is the experience and the exclusivity we offer, which they don't experience elsewhere. The Campfire Sessions® is more than just a show, it's an interaction between like-minded, music-loving people and the extraordinary and fun experiences they share together," Chi and May claim. "Besides the acoustic show by the bonfire that happens at night, our campers also get to see tourist spots and try local delicacies in the province that we go to. We have lots of solo campers that go with us and ended up making new sets of friends after the sessions. The next thing we know, they’ve continued to hang out with fellow campers after the event and have formed stronger bonds as friends. Personally, it's very rewarding to know that in a way, they feel a sense of belongingness in a community."

When asked about what's next for Green Turismo and Campfire Sessions, Chi admitted "To be honest, we haven't planned anything for the next one yet. Me and May, besides GT & CS, also have day jobs and other brands to manage. But let's see, time really flies fast so before you know it, we'll be driving around again soon to scout for another town for Campfire Sessions 7."