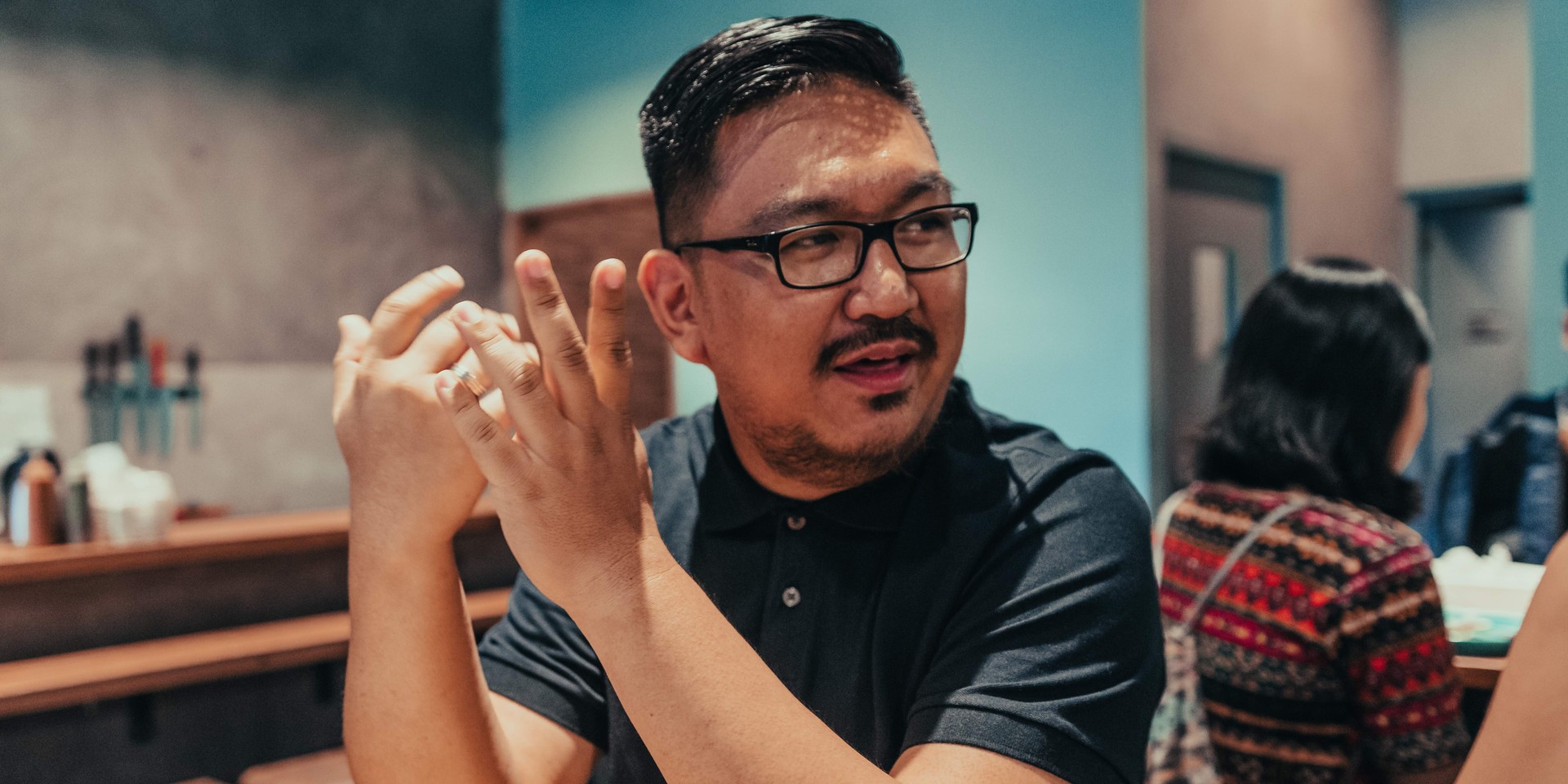 Chino David, sitting in a Mexican restaurant in Makati, is breathless from the summer heat until a waiter swoops in to give him a glass of water. Lately, though, it has been more than the summer heat that has got Chino breathless — his musical calendar has been filled with rehearsals, recordings and shows with the band he is now part of, Hale.

The alternative rock act is thrilled for the June 8 Spotify release and the June 14 ground launch of their upcoming album Alon, the band's first offering since 2015's Time and Space EP. What makes this album special for the band, for the fans, and for Chino himself is the fact that this is their first full-length record with him in the fold since returning to the stage for the first time at the 2017 UP Fair. Playing with the 'Kung Wala Ka' act in gigs after that, Chino hopped onstage as the band's "permanent guest" until officially joining the group in October later that year. 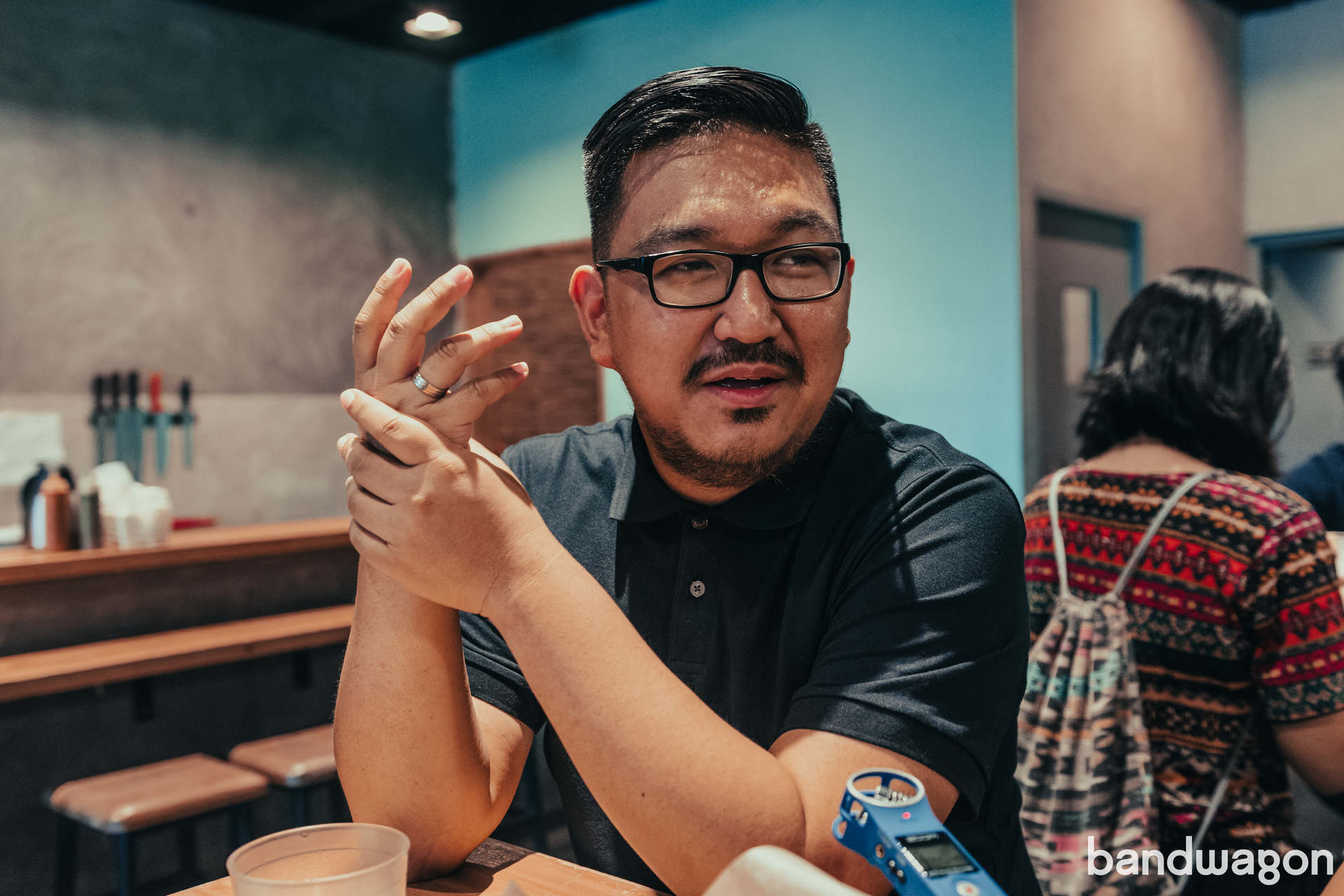 The whole time I was playing with them, 'di kami nagpa-practice tapos gigs all over na. That was just how natural it was."

"The first time I played with them [was] in February, [but] the first time we actually practiced was October,” Chino shares. "The whole time I was playing with them, 'di kami nagpa-practice tapos gigs all over na. That was just how natural it was. Kahit kami parang 'Teka lang, di pa tayo nagpa-practice.'"

From the start, music

It might have come as a surprise to the many, but we're thinking the 30 years Chino has wielded the violin bow may have helped. He had played in bands through high school and college, all while performing with the Manila Symphony Orchestra (even when it was still the Manila Youth Symphony Orchestra) in 2001.

"It was my parents’ choice. When they brought me to St. Scholastica’s College for lessons, gusto nila sana piano — why not let him try the violin kasi ang dami nang nagpa-piano," Chino reflects on his early days of playing. "They were really encouraging kids to learn the violin. I was 5 years old at that time. I didn’t stop." 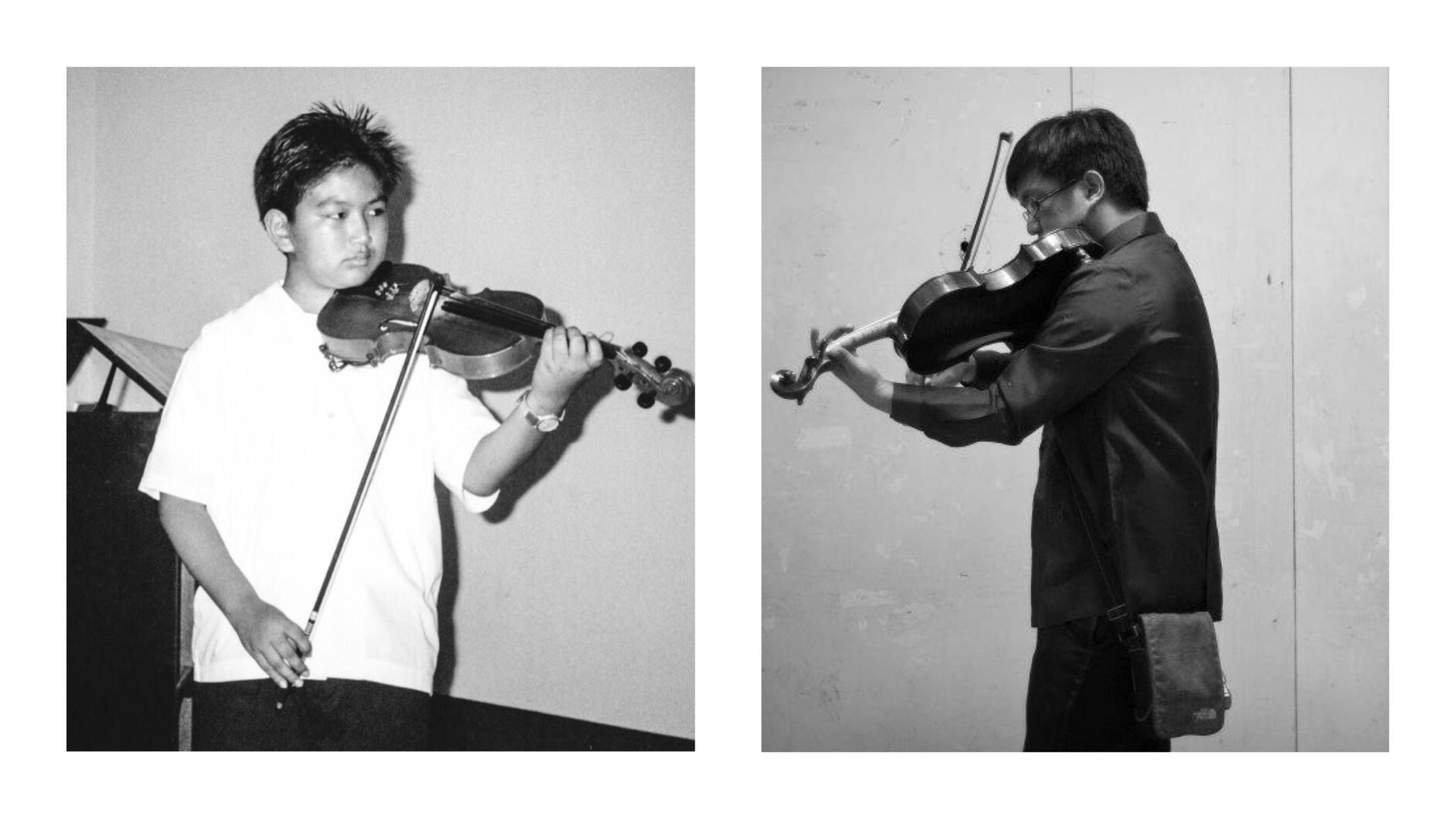 Chino knew the differences between the seemingly polarizing worlds of being in an orchestra and a band early on, but that didn't hinder him from experiencing the best of both worlds.

"Basic thing for me is learning talaga. It's a different skill set to play with another person, [and] a different skill set to play solo — whether in a classical setting or band setting, for me it applies. Mas maingay lang sa band. Sa orchestra kunwari mas seryoso, pero we have fun. It's actually fun playing for an orchestra. Maybe it's just a mindset [thing for]whoever is part of that group." Chino explains. "My first band was in high school. The first song we played was Dave Matthews Band’s 'Ants Marching.' 'Yun talaga eh. We played a few gigs, two or three."

On his third year at the University of Asia and the Pacific, Chino got a call to sit down with a then-four-piece band called Silent Sanctuary.1 What started as a jam session on an episode of NU 107's In The Raw turned into 14 years of writing five studio records, spreading their music to different corners of the country, and garnering a following of over 2.4 million fans.

As a solo musician, on the other hand, Chino found himself grow when he began to take in work as a musical director. "It was something I really wanted to do since I was younger," he says.

In 2008, he worked with Sugarfree to arrange a massive production with the Manila Symphony Orchestra at the Music Museum for the band's ninth anniversary. 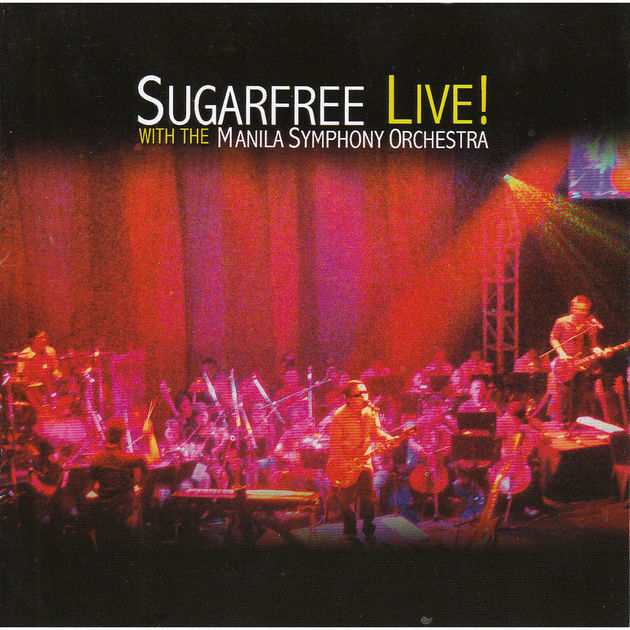 More recently in 2017, he directed Re-Imagination, a free concert that featured the re-arranged OPM songs in different stylings with Jim Paredes, Cooky Chua, and Aia De Leon centerstage, as well as Xian Lim's solo concert Songs in the Key of X. 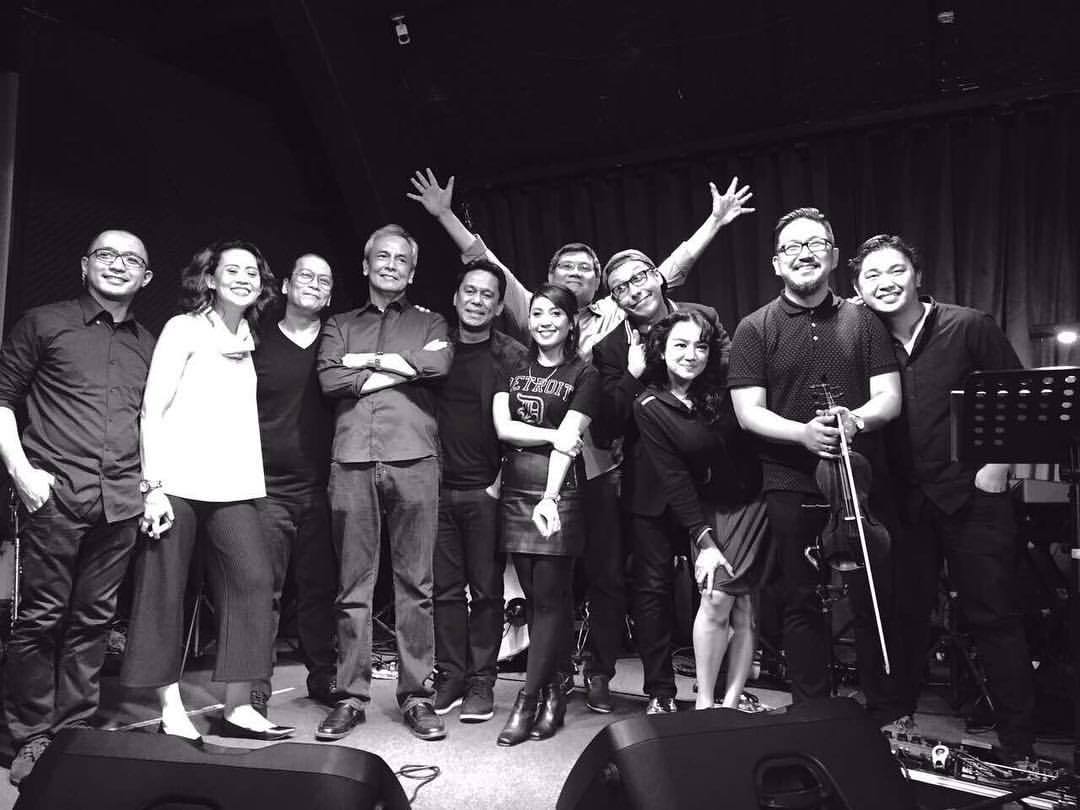 It was something I really wanted to do since I was younger." 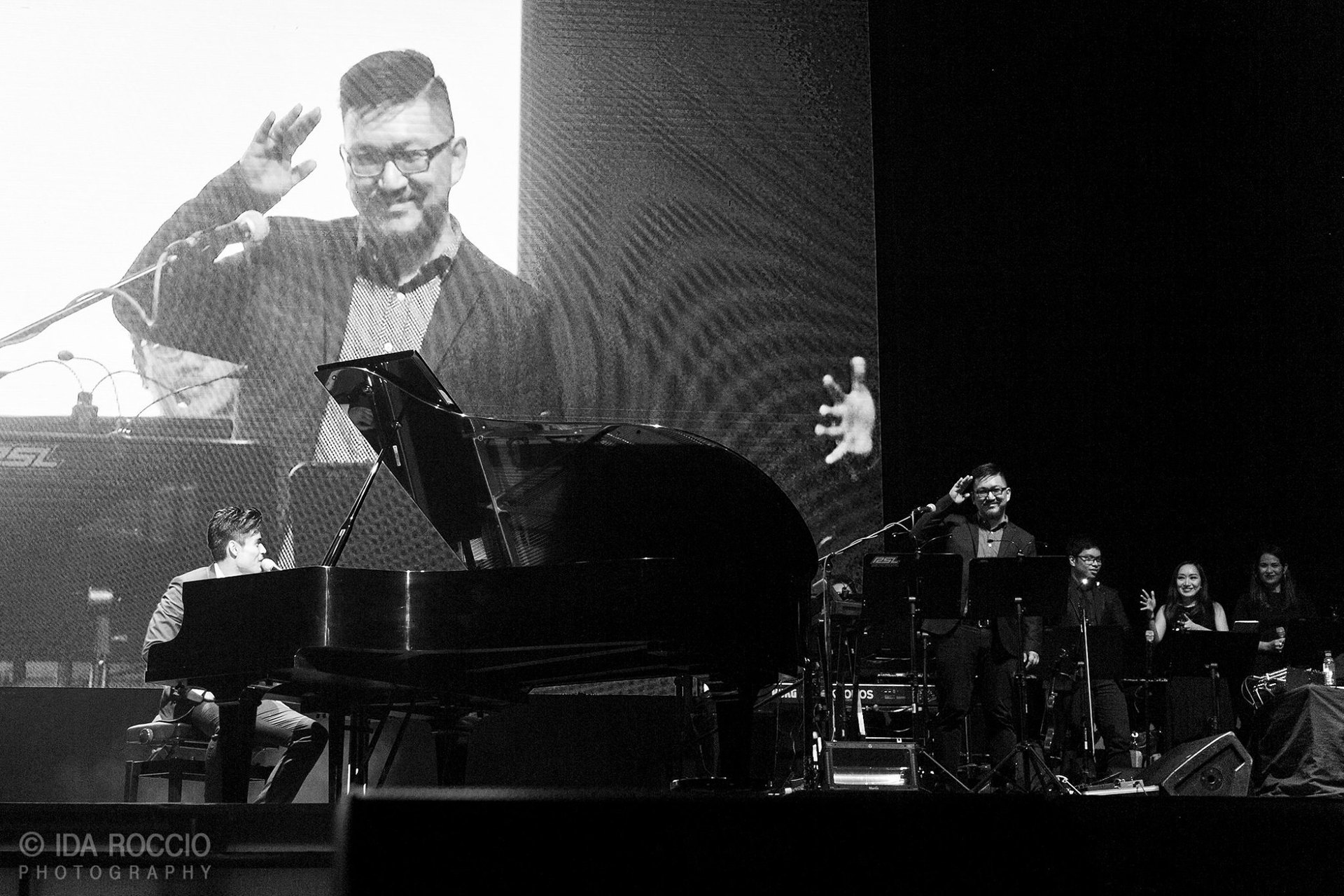 When the other projects started pouring in, Chino reorganized his calendar with Silent Sanctuary, making sure that there'd be someone to fill in for him at shows. Eventually, though, both parties silently decided to go their separate ways in 2016.

"Nobody released anything," he explains. "[The fans] were posting photos of me na parang namatay ako. 'We will miss you' na may picture ko."

Two weeks after he parted ways with the band he had been with for over a decade, people started tweeting and asking why he wasn't showing up at gigs anymore. The band never released any official statements regarding his departure, so Chino decided to wait for them to say something until the 11th of February last year, when he replied to a fan on Twitter.

Yup. I left the band. We just didn't see eye-to-eye with some things anymore. #icebroken https://t.co/OjIbi0YUQY

After his stint with his former band, Chino continued to write and arrange for orchestras, jingles, session bands and shows, but this doesn't mean that he has never felt exhausted. Luckily, he had Hale.

"I was in the middle of arranging a show and I was almost burned out. Tumawag sila sakin, 'Chin, jam ka.' 'San ba yan?' [I asked.] Sobrang lapit lang sa bahay. It was my two-hour break from working. That was really good," Chino recalls. 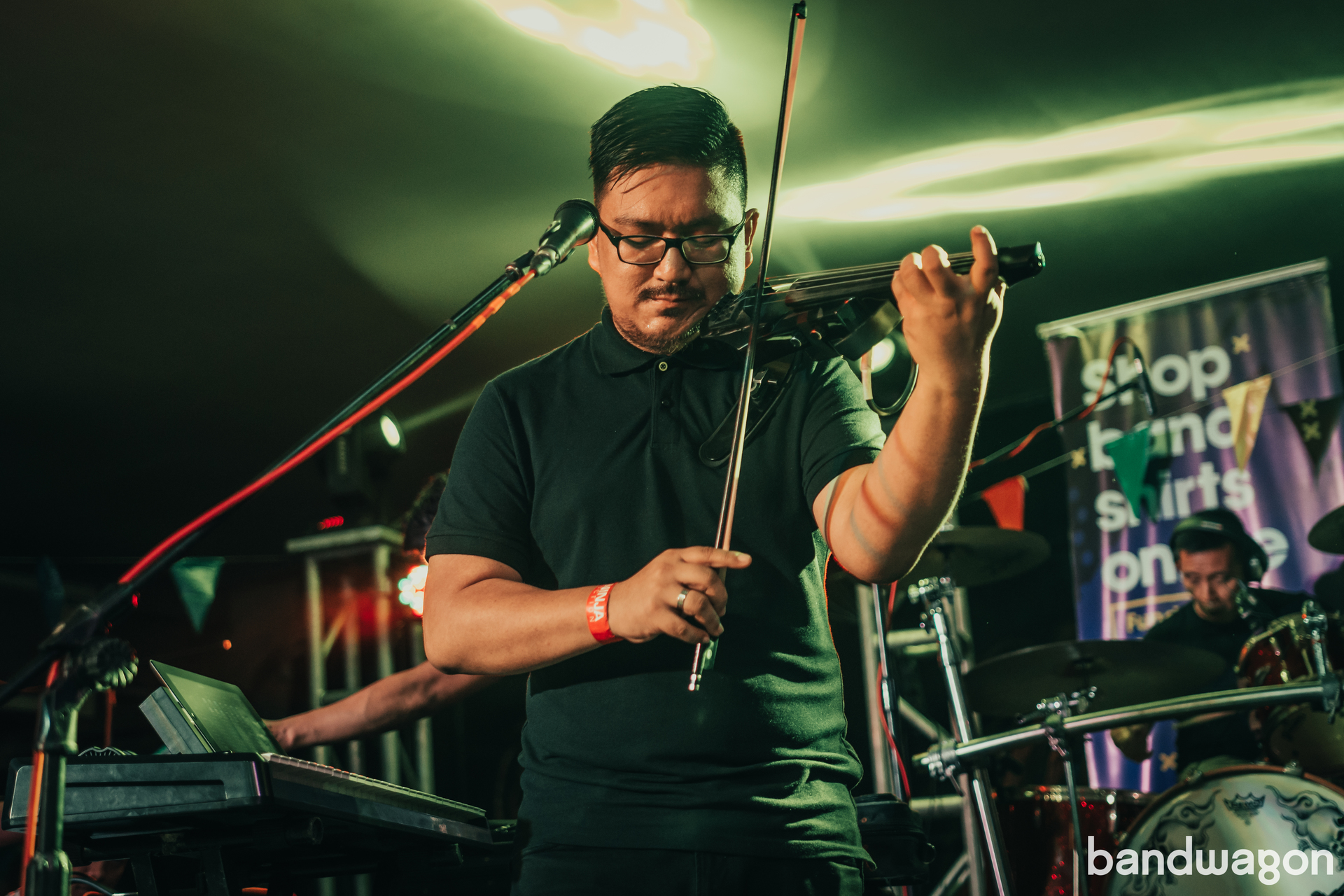 Perhaps another factor, though, that affected Chino's easy integration into the band is because of friendship itself. When Hale took a break, he was part of the band Roll Martinez (lead guitarist) pioneered, Parenthesis.

"Sa band namin ni Roll, we were already playing his songs. So, I had an idea; I knew how to play [the songs]. In a way, I knew what to do. [During] my first jam with them (Hale), sila nag-enjoy. Ako nag-enjoy.

"I was able to gel in almost seamlessly because I knew their songs. Ever since, nagagandahan ako sa songs nila. Maybe I was a closet fan," he says.

The past year zipped by just like the long ride he'd just been on, but his journey on this new chapter of his career seems far from over. Aside from his usual appearances with the rest of the band this year, Chino had the chance to work with Moonstar88 on their 4-track EP Strings Attached and the string arrangements for Ebe Dancel's digital concert series with One Music PH. Anyone can see not only how successful he is becoming, but also how happy he really is.

This interview has been edited and condensed.

1 This article previously referred to Silent Sanctuary as a three-piece when it was already a four-piece by the time David was invited to join. The article has since been amended.

Hale are celebrating the release of their new album on June 14 at 12 Monkeys Music Hall & Pub.

Special thanks to Mia Lotho of Lágrima.