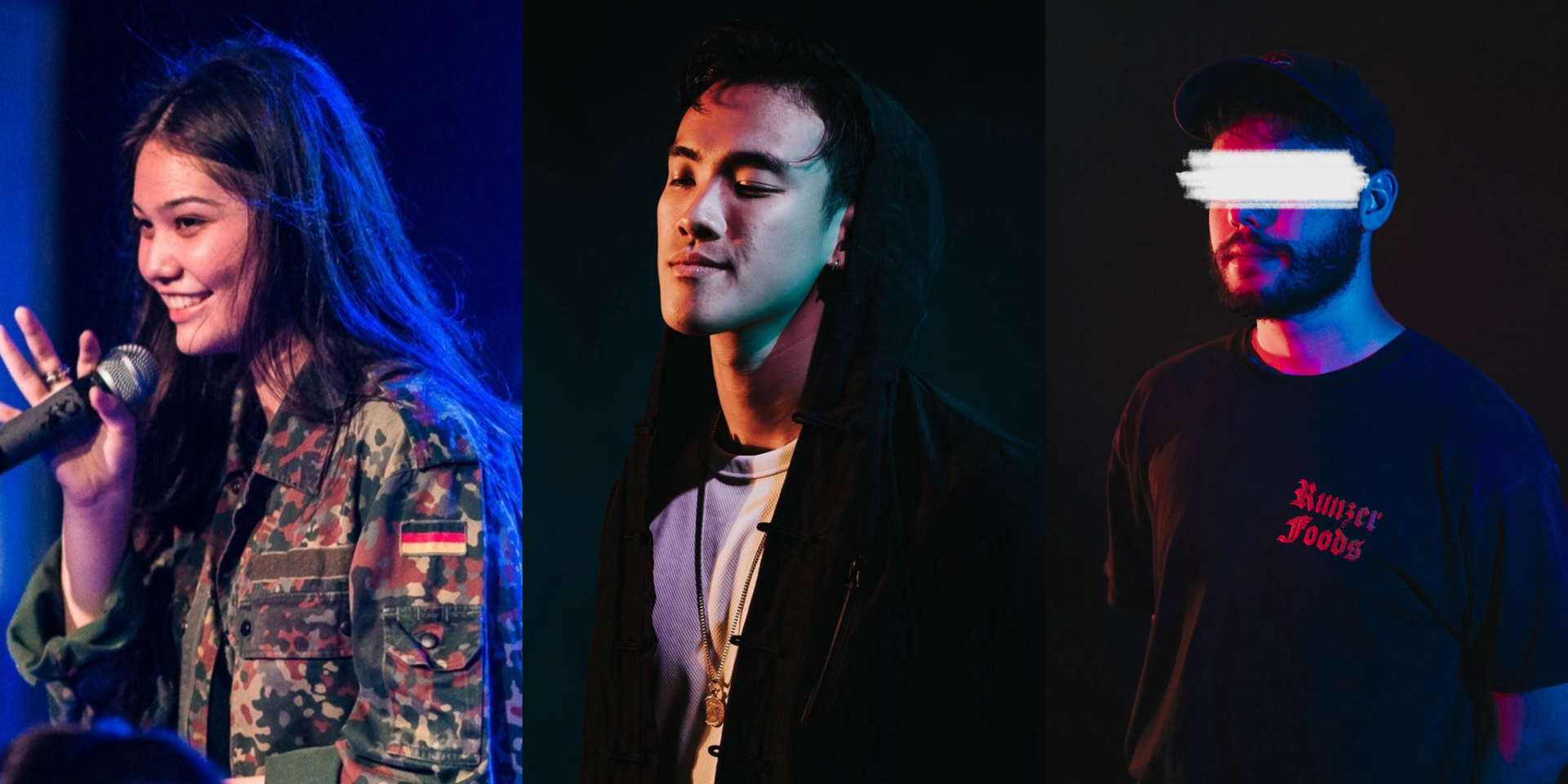 Clarke Quay has announced the launch of a three-part live music series called Sound Port, a brand-new audio visual spectacle held at the iconic Clarke Quay Fountain Square, in partnership with Bandwagon. The first edition will take place 14 to 16 November with a stellar lineup of eclectic electronic artists and DJs like MYRNE, A/K/A Sounds, brb., Duumu, Shye and YAØ.

Headlining the first edition of Sound Port is none other than our very own dance music hero, MYRNE, who comes fresh off the release of his debut album, In Search of Solitude, and a 10-city tour around the United States in support of the record. MYRNE is no stranger to bright lights, having performed at globally revered music festivals such as Ultra Music Festival in Miami, and Tomorrowland in Belgium. MYRNE was also enlisted by Martin Garrix for an official remix of 'Ocean' featuring Khalid, and became the only Singaporean to be signed to dance music mogul Diplo's record label, MAD DECENT. His performance at Sound Port will be one to catch, as he premieres his never-before-seen live set in Singapore for the first time ever.

Joining MYRNE are esteemed DJ and co-founder of ATTAGIRL!, A/K/A Sounds, with her distinct style of bass, rising producer and DJ Duumu, who has racked up over five million streams on streaming platforms, 2018 Vans Musicians Wanted winner, and burgeoning bedroom pop princess Shye, award-winning singer-songwriter and producer YAØ, and soul/R&B group brb., which has garnered a cult following of over 90,000 fans in just one year.

Check out the complete programming schedule of the weekend below.

The first 100 party goers will receive a complimentary drink on the 14th of November.

F&B STALLS
To add on, pop-up food and drinks stalls from new outlets Live At The Crossroads, who will be introducing a limited locally brewed Lychee Pale, modern Indian cusine and Bira beer from gastrobar SG Gabbar and popular Spanish delights and Sangria from Octapas Asia

FREE VOUCHERS AND PRIZES
The first 100 party-goers each night will get a F&B voucher pack! Every purchase at the pop-up stalls is also eligible for a daily lucky draw prize for one lucky winner each night!

The first edition of Sound Port Clarke Quay is set to take place from Thursday, 14 November till Saturday, 16 November at the Clarke Quay Fountain Square. Admission is free. For more information, click here. 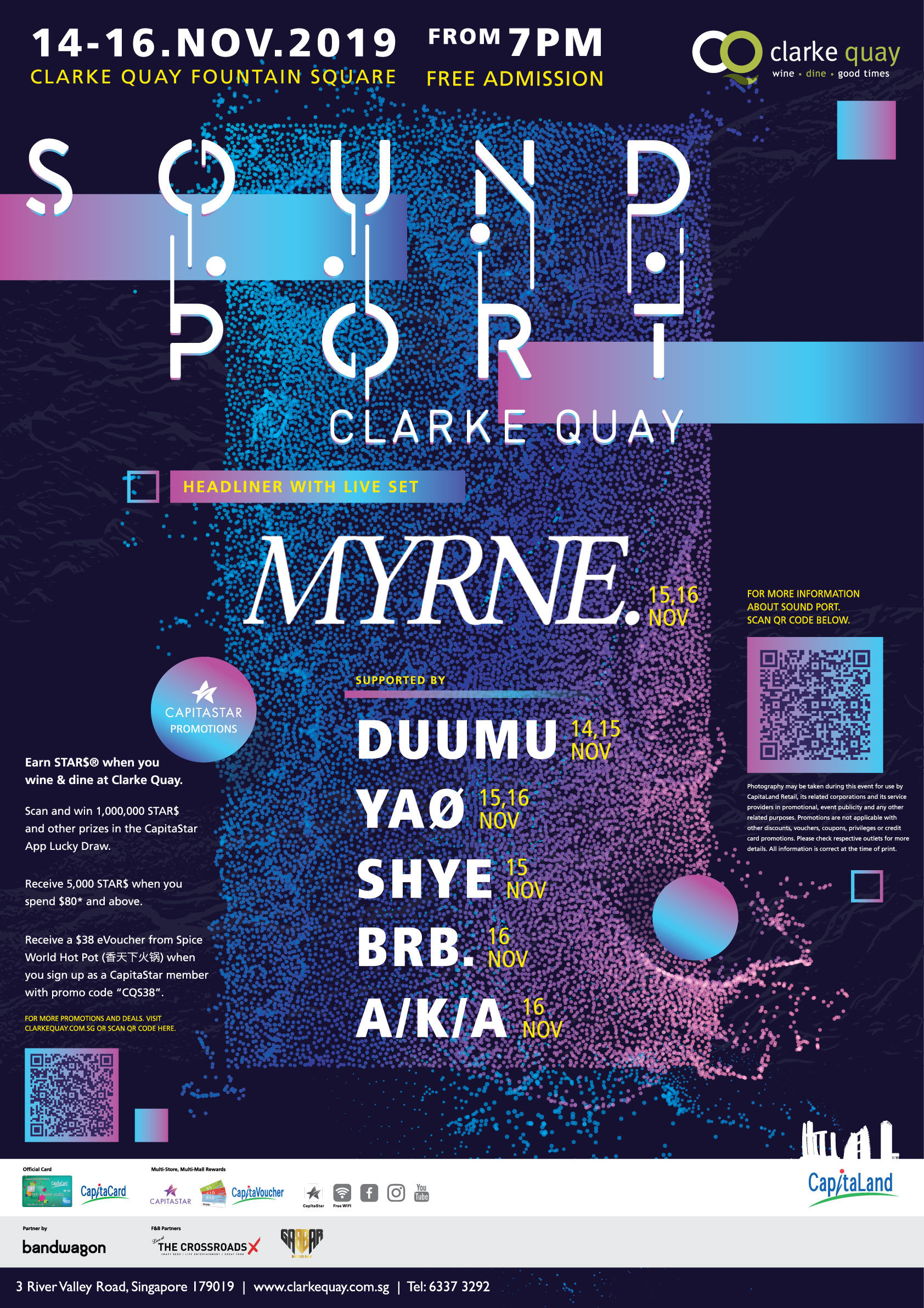 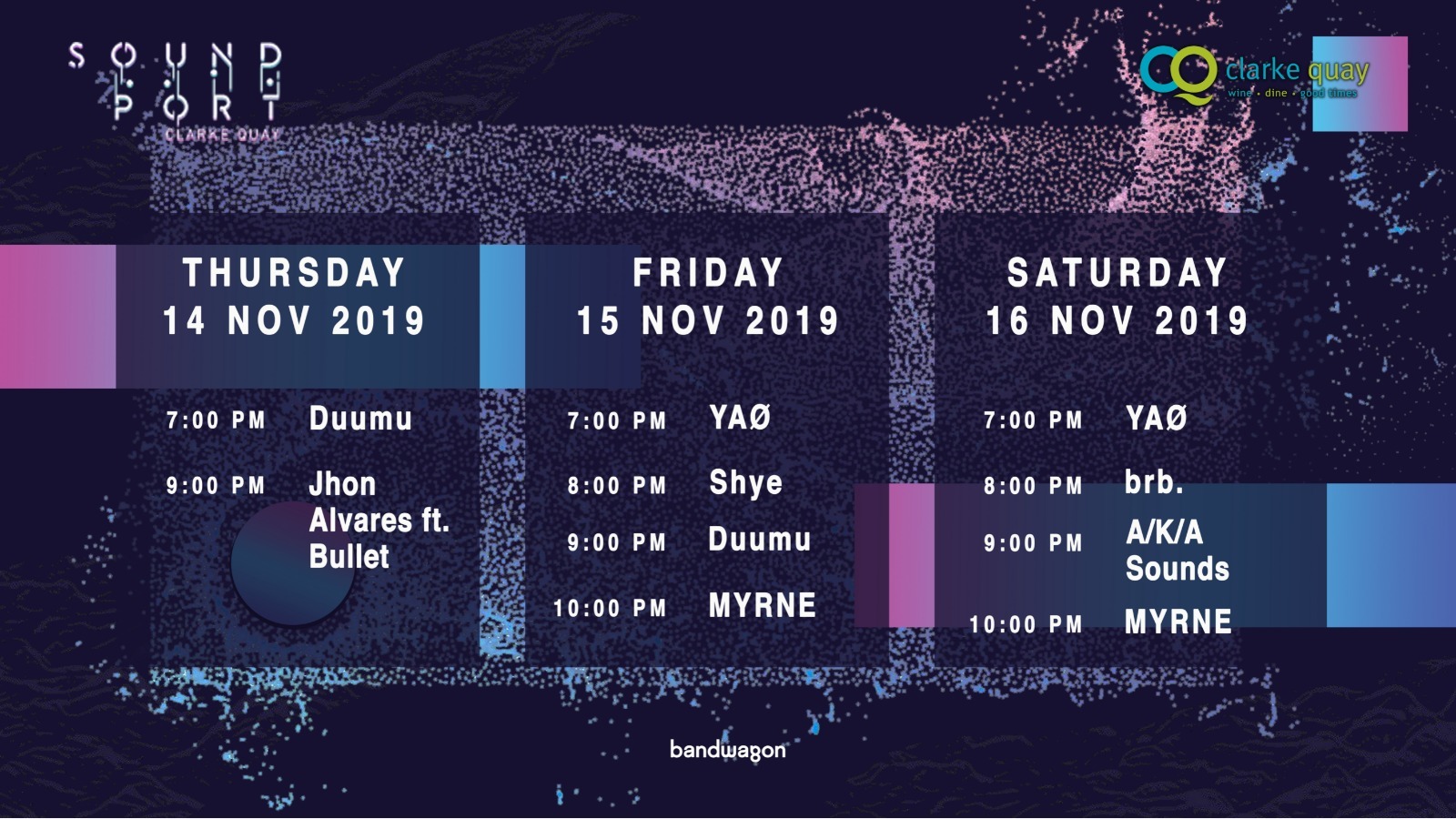