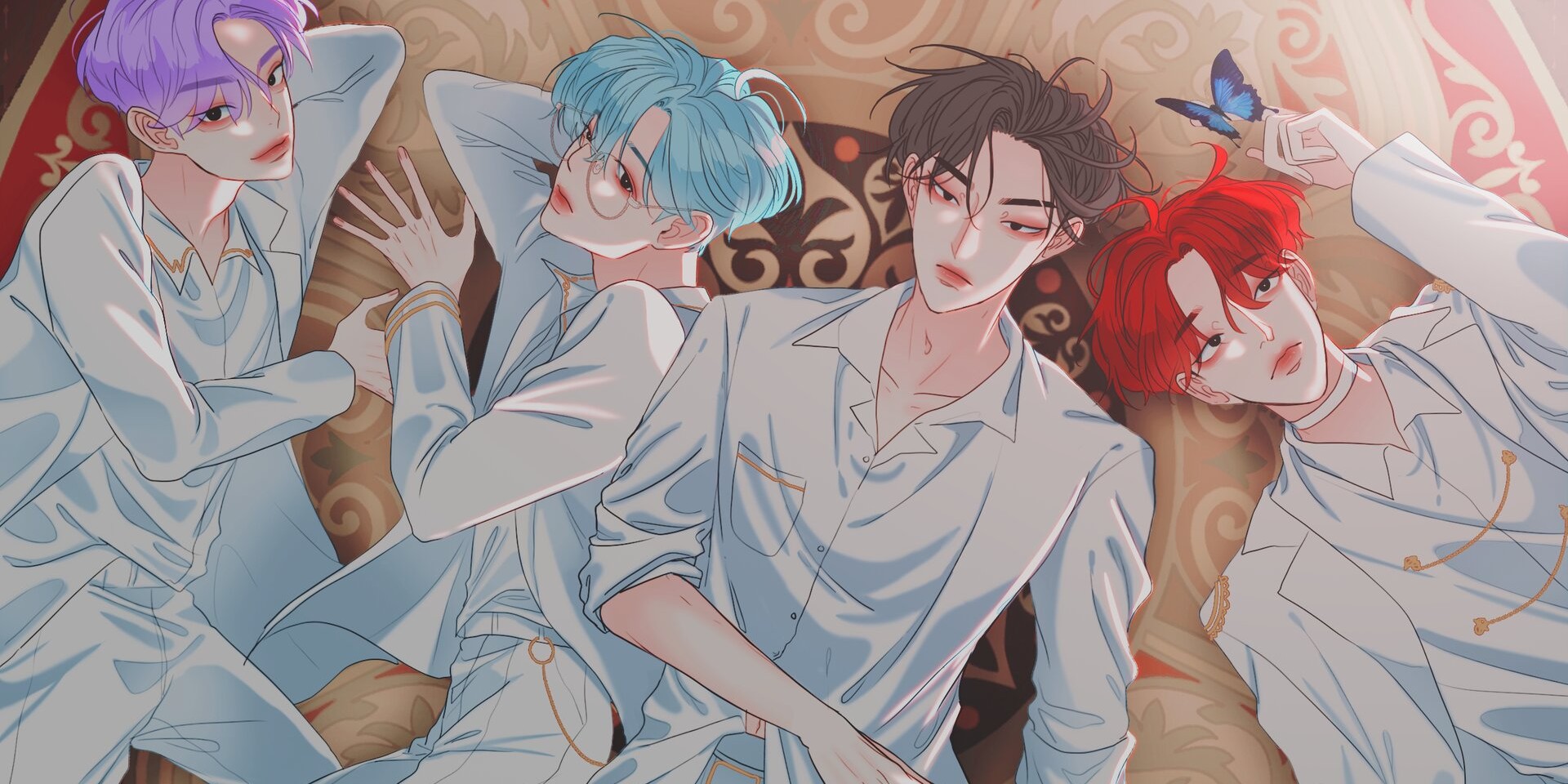 Pen in hand and head buzzing with ideas, Jjolee has been merging her love for K-pop and her passion for art for the last four years.

A long time artist and webtoon author, Jjolee is the creator of the beloved webtoon Lost in Translation. Started in 2017, Lost in Translation is a comic revolving around the fictional K-pop group Mayhem, and their adventures with each other and within the music industry.

Jjolee first launched the comic as a way to translate her thoughts and feelings through her characters. However, thousands of readers and several chapters later, Lost in Translation grew into an immersive universe that's attracted fans from all corners of the world.

"The webtoon started for me, but it continued for my readers," Jjolee tells Bandwagon.

Wanting to take inspiration from real life, Jjolee has based a number of characters from actual K-pop stars, including DAY6's Jae. "I've always pictured Dae to have Jae's voice since I did listen to DAY6 when I started the series, though I knew this was close to impossible to actually make happen," says Jjolee.

But, as they say, nothing is impossible. the webtoon author most recently got to work with the 'Pacman' act to voice Daehyun, a character inspired by him, for Mayhem's latest single 'Be The Change'.

"Having Jae on this project still feels surreal. I still feel like I don't deserve it, but I will not take his kindness for granted," says Jjolee via an Instagram post.

The comeback you’ve all been waiting for… Mayhem just dropped their new single “Be The Change” ft. @Jae_Day6, @yooleemusic, @eliitish, @sooyoon__kim! Watch the full MV on our YouTube channel and don't forget to read Season 2 of #LostinTranslation by @_jjolee on #WEBTOON now! pic.twitter.com/feMgVFnZIH

Bandwagon caught up with Jjolee to talking about her beginnings in art, the creative process behind Lost in Translation, and working with DAY6's Jae.

Hi Jjolee, tell us about yourself and your background in visual arts and illustration.

I've always been involved in art ever since I was younger, though society's standards of stability and success clouded a lot of it, as I was too afraid to pursue it as a kid. I took art classes in high school, and that was the extent of my background. I quit drawing once I went to college. When I felt my life started to feel like a stranger to me, I looked to find the most familiar thing to myself, and that was art.

I started my webtoon back in 2017 as a personal project while I worked full time at a pharmacy. After two years, Webtoon picked it up under licensing.

What drew you to K-pop and what inspired you to make a webtoon about a K-pop group?

I've always been interested in K-pop since middle school! So, I was already familiar with it when I wanted to start a webcomic since it was the last thing I felt very involved in. Since then, I listened to K-pop only casually, I didn't really feel connected to any group at the time but since I was part of the community for a long time, it felt right to make a series about it.

How did you come up with the concept and storyline for ‘Lost in Translation’, and what motivated you to start the webtoon?

Lost in Translation was created through my personal experiences, despite the series being about K-pop idols. I thought that I could humanize them by reflecting them off of me. Every character has a piece of my life in them, and I translated those experiences into their backgrounds and stories.

The series became my therapy since I was struggling with myself at the time. It wasn't about making money or anything. To me, it was about healing and addressing parts of myself that I couldn't face at the time. I never thought I'd commit to it, but when it started getting readers on Webtoon Canvas, a platform for anyone to post their work without pay – I felt inspired to continue.

Every episode takes me about a week to produce. I don't script it out first or anything, since I feel like that could make the episode seem unnatural. I just storyboard it and write the dialogue as I go. I read it over and if it feels okay to read, I go with it. The panels go on next, and then I line everything over, flat color all of it, then shade. The backgrounds go in after that, and then I finish with the speech bubbles and text. Every episode takes me about 3-4 canvases on Photoshop. 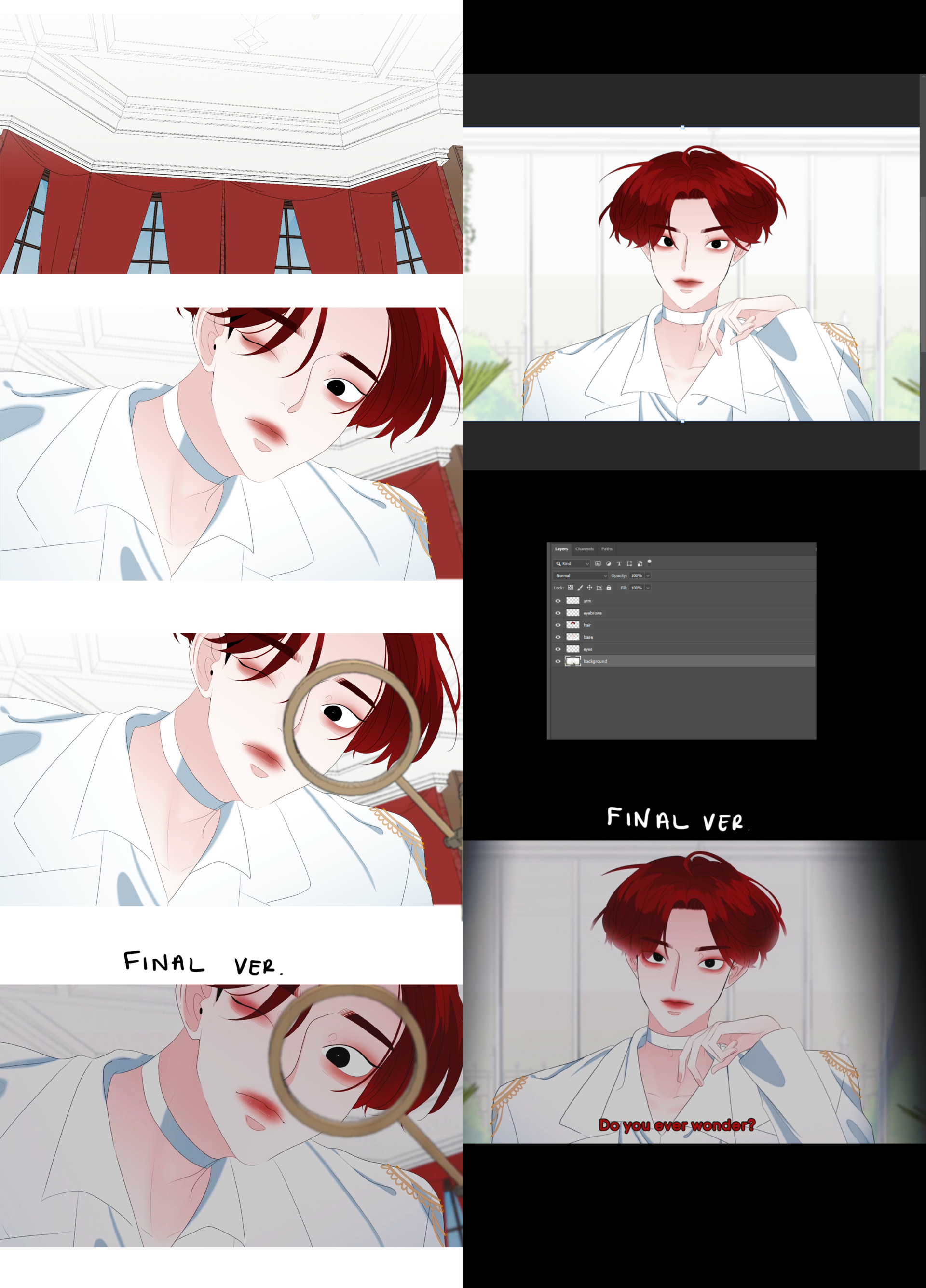 After working on the webtoon for over 3 years, what keeps you motivated to continue the story?

I honestly just really love my work. I feel like there's a lot of depth in it that's worth telling and sharing, so that's been the major factor. It's probably why I'm so willing to do extra content alongside the webtoon. It doesn't ever really feel like work. Even when I get burnt out from producing constantly, my readers are so passionate and supportive of me. They have motivated me more than they probably know.

Another day at work... I hope you guys will like this one! 🥳 pic.twitter.com/iII9FlZe86

How do overcome creative blocks?

I just keep drawing, to be honest. I don't have time to really relax and wait for it to pass since I have to meet deadlines.

We heard that you’ve just collaborated with DAY6’s Jae to voice Daehyun! How did you get in touch with him? How does it feel to have Jae voice the character you based on him?

Yes! I remember emailing him back in 2019 to see if he would be willing to collaborate with me, but this was when I was still in Webtoon Canvas, and he hadn't been active on his JaeSix YouTube account in a while so I figured I wouldn't get a response. Which I didn't (laughs).

A year later, in 2020, he released 'Pacman'. I had always drawn fanart for his eaJ projects in the past, but I felt like I wasn't promoting him well enough. Since my audience followed me for my webtoon and art, it doesn't necessarily mean they'll look into my fanart. So I thought: why not just use my webtoon?

I drew this collarbone-up drawing of my character, D.Min without a shirt because I knew most of my readers wanted to see an illustration of him like that. I posted it on my socials saying I drew him shirtless with a link attached but the link actually led to 'Pacman'. Most of them then left comments saying I tricked them, which I'm speculating was how Jae found out about my work since he replied to the tweet of my clickbait the next day. I'm not entirely sure though, I was too scared to ask him.

aight 1 mill views on this vid and ill finally give yall this man shirtless: https://t.co/rxVJXd3Wp4 pic.twitter.com/lXlC0Tmox4

I think I was still streaming 'Pacman' when I saw a comment on the video saying Jae and I should collab. Times were different, so I thought I could just try asking again since he kind of knew about my work now.

I tweeted at him asking if he would collaborate with me because I needed a voice for my character. He reached out to me that day and said he'd do it! I was more than ecstatic to have him on the project, of course. I think I was in shock for most of the day and days after, it took a long time before the reality actually sank in.

There were so many times I thought I should just settle and find someone else to voice Dae but I'm the creator of this webtoon, I knew settling out of convenience wouldn't be right. When Jae agreed to take the position, it felt so fulfilling. After that, I started to re-evaluate the project. The most important thing to me then was to make sure it became worth Jae's time. I reached out to Webtoon and asked for their help. I knew my audience already supported him, so I thought, maybe I can give him exposure to Webtoon's audience too. I would never want to take his kindness for granted and I definitely didn't want to waste his time or effort. I hope I could someday repay him for what he did for me and my audience. 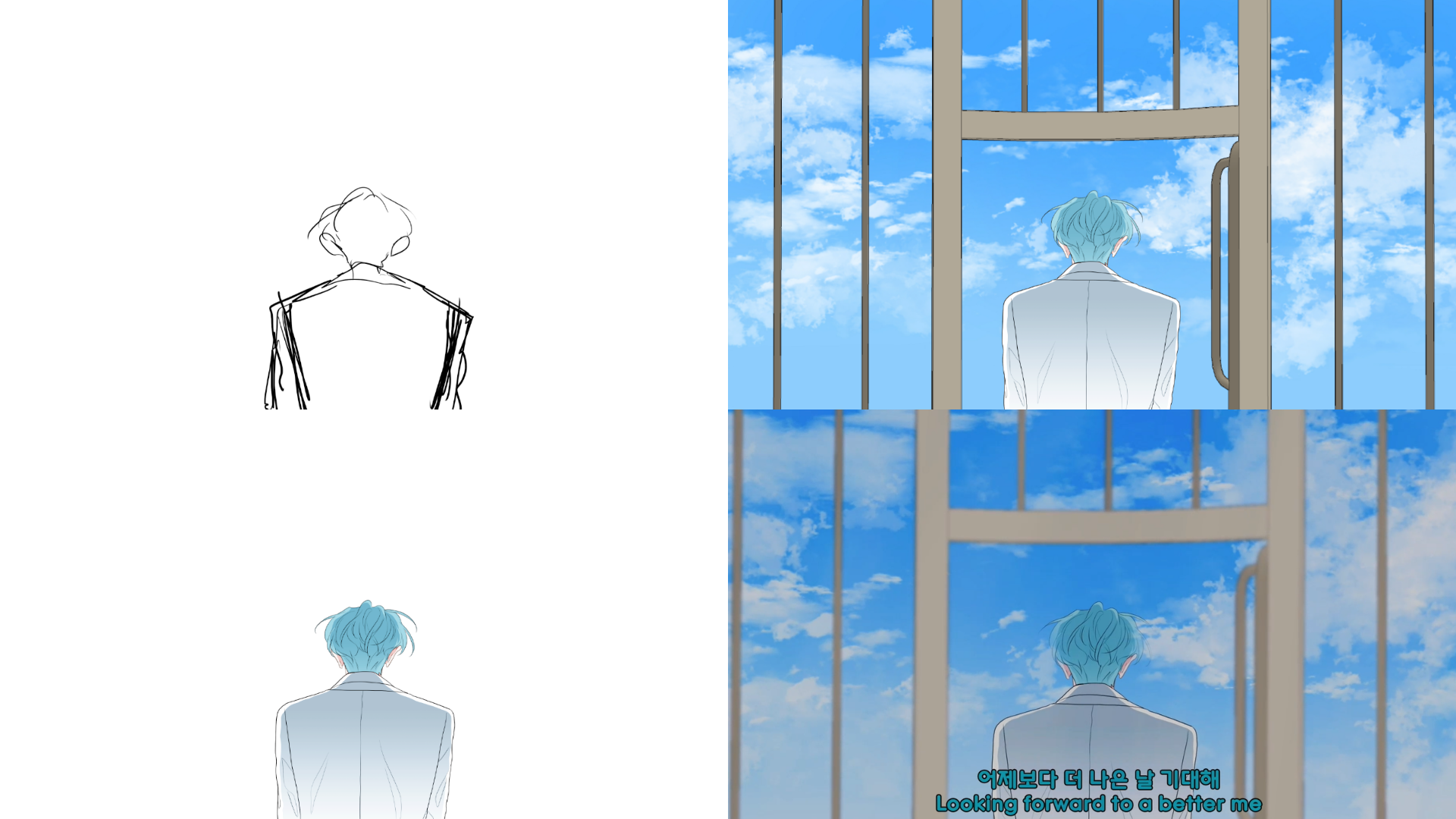 We didn't talk much since I wasn't too involved in the song production part of it but he offered his team to help mix and master the song, so I'm super thankful for him. He was always really nice whenever I did talk to him though.

Who are other artists that you listen to?

If it's K-pop, I listen to Mamamoo and Victon as well. As for other artists, I like Sasha Sloan's work a lot, and Keshi too.

Could you share what else you have in store for the ‘Lost in Translation’?

What I want people to gain from the story is self-improvement. I want people to be able to reflect on themselves, as the webtoon has a lot to do with internal conflict and how characters come to terms with their situations themselves. It's my first actual webtoon series, so I wanted the first message I offer to be about something I felt strongly about. I hope readers will stick to it to the very end!

Thanks for the love on the comeback, y'all ❤️ pic.twitter.com/dOjCVADzXB

Watch the music video for Mayhem's 'Be The Change' here.