In a quickly shifting world, where "normal" is nowhere in sight, people who are willing to adapt are the ones who survive.

It's forward thinkers like Kiswe that bend the rules of normal and strike while the iron is blazing hot. In October, the New Jersey-based cloud production platform made BTS' massive 2-day virtual concert Map of the Soul ON:E a reality, breaking world records as they streamed the shows to 191 countries live. But that was only the beginning.

Ahead of their latest milestone with Weverse, Bandwagon spoke with Khee Lee and Harold Chan of Kiswe to talk about the company's story, what it was like working with Big Hit Entertainment and BTS, their future plans, and more.

Tell us about how you guys got around to holding online concerts in the first place.

Khee Lee: We started doing small venue stuff out of New York City with a TV production company called Front and Center and Jazz at Lincoln Center, which is one of the most prominent jazz venues in America.

And we were able to do small venue concerts with Sheryl Crow and some other artists. So we got a taste of live streaming music.

And then last year, we met with Big Hit Entertainment, who is the parent company behind BTS. They are the most forward-thinking entertainment company in the world. They are very forward-thinking about how technology could be leveraged to further amplify their work. The initial meeting was to challenge us and our technology to see how far we could push ourselves with them.

And then our first big concert with them was in June called Bang Bang Con The Live. It was a 100-minute concert, and it ended up being a Guinness Book of World Record for largest ticketed live stream concert at that point in time. It had over 700,000 viewers.

And then recently in October, we did a back-to-back weekend concert series with BTS called MAP OF THE SOUL ON:E. The weekend consisted of two live concerts with two replays so it ended up being four concerts delivered to their fans. That weekend broke another Guinness Book of World Record with nearly 1 million viewers of the concert.

BTS break their own world record with almost 1 million viewers for virtual concert, MAP OF THE SOUL ON:E, here's what went down at the show

Big Hit Entertainment judges us on delivery and we live streamed the concerts to nearly 200 countries live, which I think is impressive, because different countries have different types of network capabilities. They also judge us on fan sentiment because the BTS ARMY is very passionate. It was wildly successful because the fans loved the delivery and they really loved the 4K option.

We have been doing more concerts since the BTS concerts. We recently livestreamed a Culture Club concert on December 19th from London and we also livestreamed a concert with indie pop trio AJR on December 26. They had some very cool ideas that we implemented for their show. 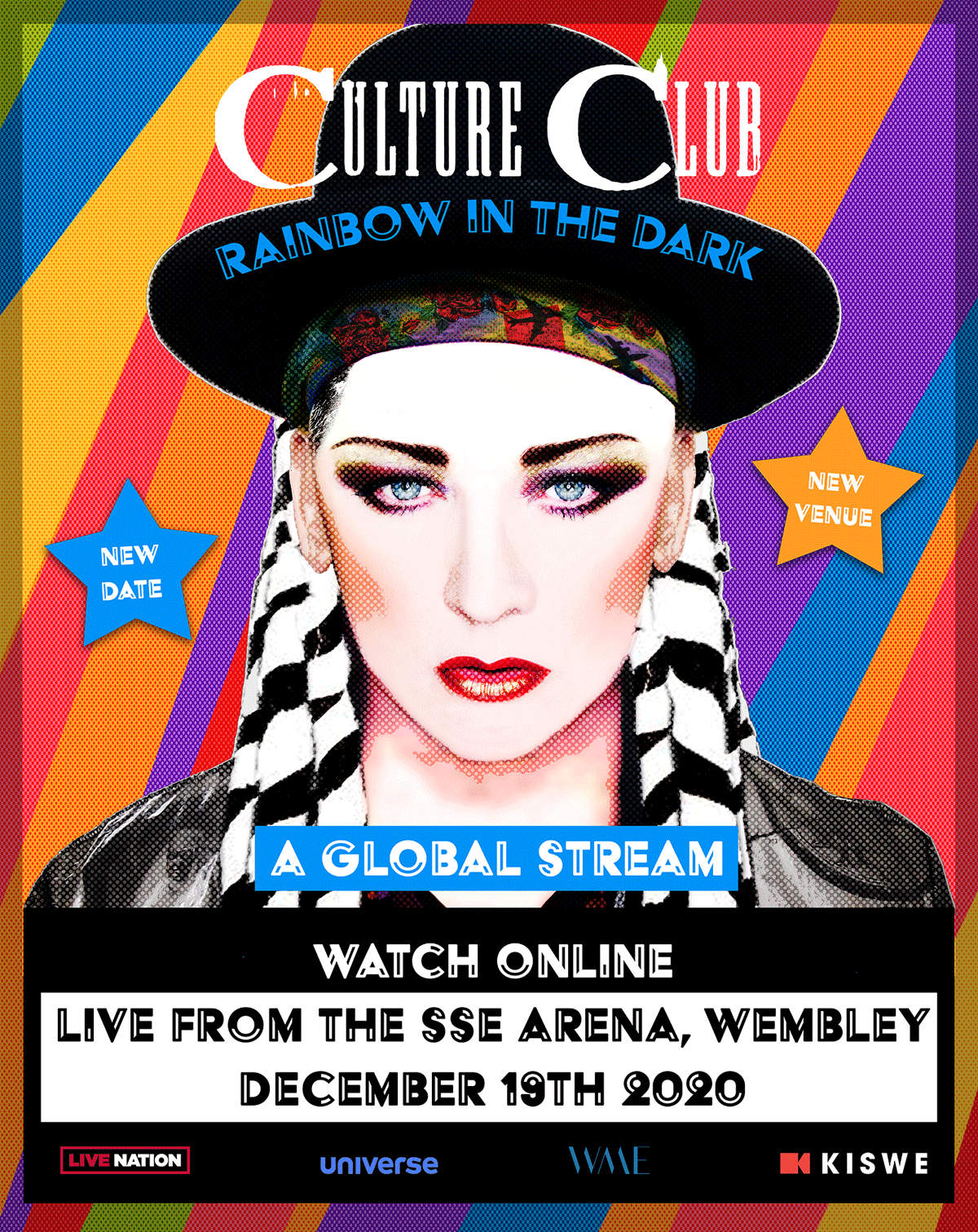 And we have a couple of other ones that we will announce later that are happening in the first quarter of 2021.

So you've told us your story. But what are the basic things you need to put up an online concert?

I like to say we're good at swimming in our lane. So we are whatever the feed is out of the cameras on site, to the actual delivery, to the user experience. It's all web-based, meaning the concert will be displayed on the web or mobile web and cast it onto your TV, if you'd like.

During the BTS concert, we did things with the ARMY bombs. We connected their lightsticks via Bluetooth to the fan's computer so it would be in sync with songs. We also had a virtual lightstick where you could just click on a button to show your enthusiasm which ended up with over 125 million clicks during the duration of the show.

So technically speaking, we're everything from the video into the experience for the user. There's a lot of things we're going to try to do in the future with fan reactions, like capturing on mobile and showing video clips—stuff that you probably assume in fan walls, all that stuff we can easily do.

Harold Chan: Essentially, the concert production is done by the talent and production team.

Most of them would have their own incumbent production partners, but if they need suggestions, we can work with them to recommend some.

We take care of everything for the digital concert end to end. As long as we are able to receive the digital feed, we use our cloud-based technology to put together the best virtual concert experience.

Everything from the validation gateway, payments, merchandising, social interactive elements, and of course the concert experience itself which can be in Multiview, 4K, or augmented reality.

For BTS to work with us is a great validation on how we can help deliver the best virtual concert experience. This really provides the digital audience with an experience akin to being at the stadium itself.

In what ways would you say that the pandemic has changed or affected your company?

Khee: It's accelerated everything. We're one of the very few lucky companies that the pandemic actually helped because we're in the live streaming world. A lot of our business is actually in sports, and we have over 70 partners from the NBA in the US to the Premier League Productions in Europe, and Mediacorp, beIN Sports in Asia.

And then music is relatively new. There are so many artists that are just sitting at home, and we're learning that it's not just the artists. They also have managers and staff and band members who are not making money because the majority of their income comes from touring. And so there is a huge curiosity to do live concerts.

How can a band or artist get in touch with you to put out their own virtual concerts?

Harold: A couple of ways. Once we did the BTS concert, we got some looks and inquiries from labels and concert promoters. This gave them an idea that while physical concerts is a challenge, the opportunity to transform and do a digital concert was very economically feasible. We try to engage with them to see how we can help.

We try to work with every partner to scope out the opportunity. We understand that this is a livelihood for a lot of small companies as well as transformational opportunities for big companies. We actively go to these partners who might have been immobile or paralyzed as the pandemic shut down physical concerts to show them that there are definitely possibilities still.

The outreach is two-way. We try to reach out to industry players but we also hope they would reach out to us. We will endeavour to find a solution to help. The BTS concerts showed a few things-that digitizations can also help transform a physical experience industry, provide the resilience and also create new opportunities globally. It also showed that if you can provide a great virtual experience akin to being at a stadium, fans are willing to consume such events.

And in what ways can we see improvements in the user experience with your shows?

Harold: We have always put the audience at the centre of everything that we do. When every device is personal, how do you make that engagement as interactive as possible? What actually adds up to their enjoyment of going to a physical music concert or a sports event. Why was that such an irreplaceable experience? So we put that a lot of that thinking behind our audience engagement technology, to ensure that the person watching behind their screen feels no different from being at the actual event. 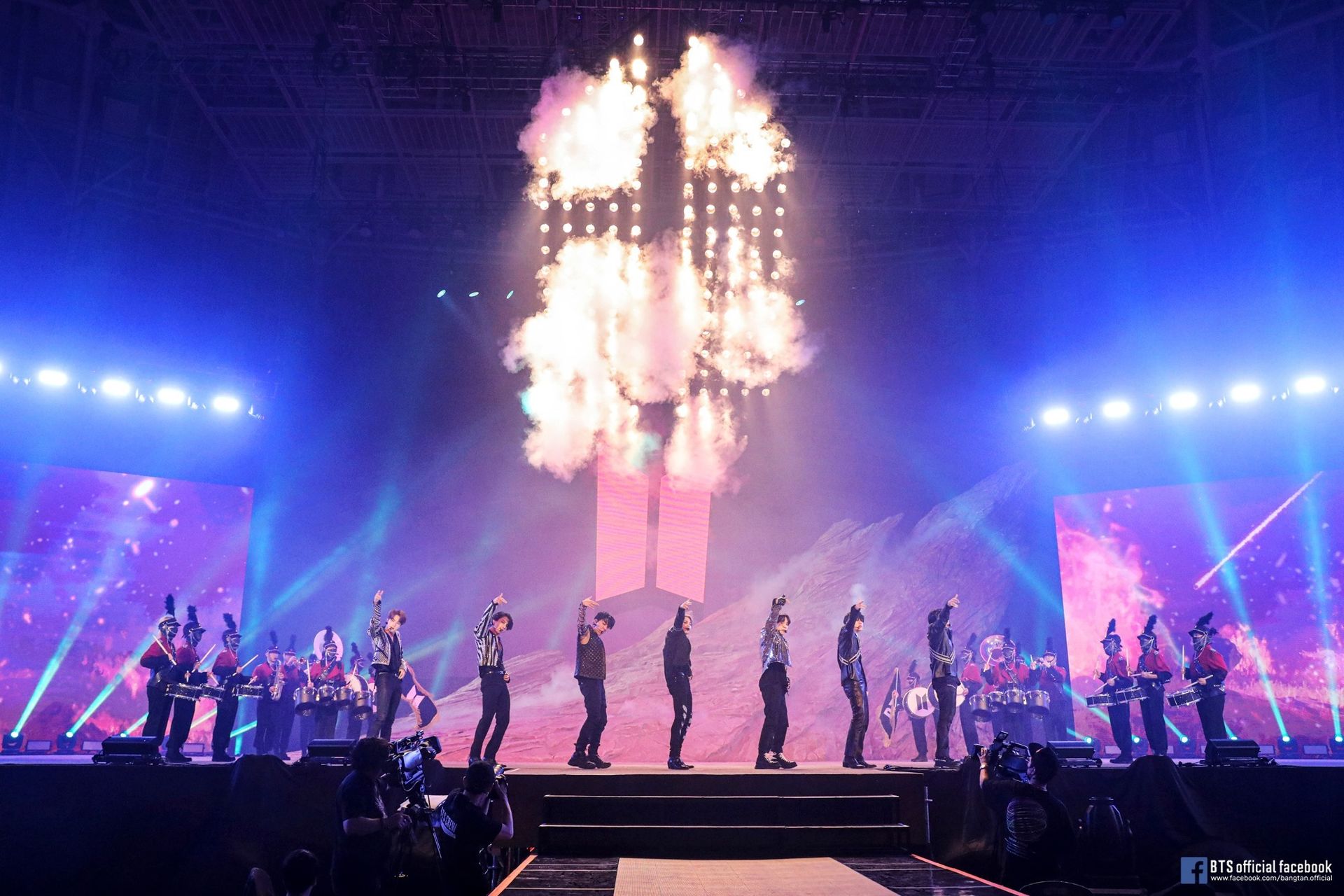 Imagine going to our digital concert/stadium, you walk in, buy your fan merchandise and digital souvenirs. You suddenly see your fan club president on screen and say to yourself “Hey! I know this guy!”. You meet a few fellow friends who you knew were attending the digital concert and create a little private corner chat room to talk and cheer on the band. You take a selfie at the stadium with the band behind you and share it instantaneously to social media.

So the whole experience that we have created for this digital concert is really to ensure that the person watching behind the screen is not lacking in the interactivity and two-way engagements that is so important at every physical event.

Last but not least, by bringing you there virtually, we are also putting you in front of the performing artists. When the band is performing, they are not performing in front of a blank screen and cameras. We are putting fans across the world who are viewing them at the same time. 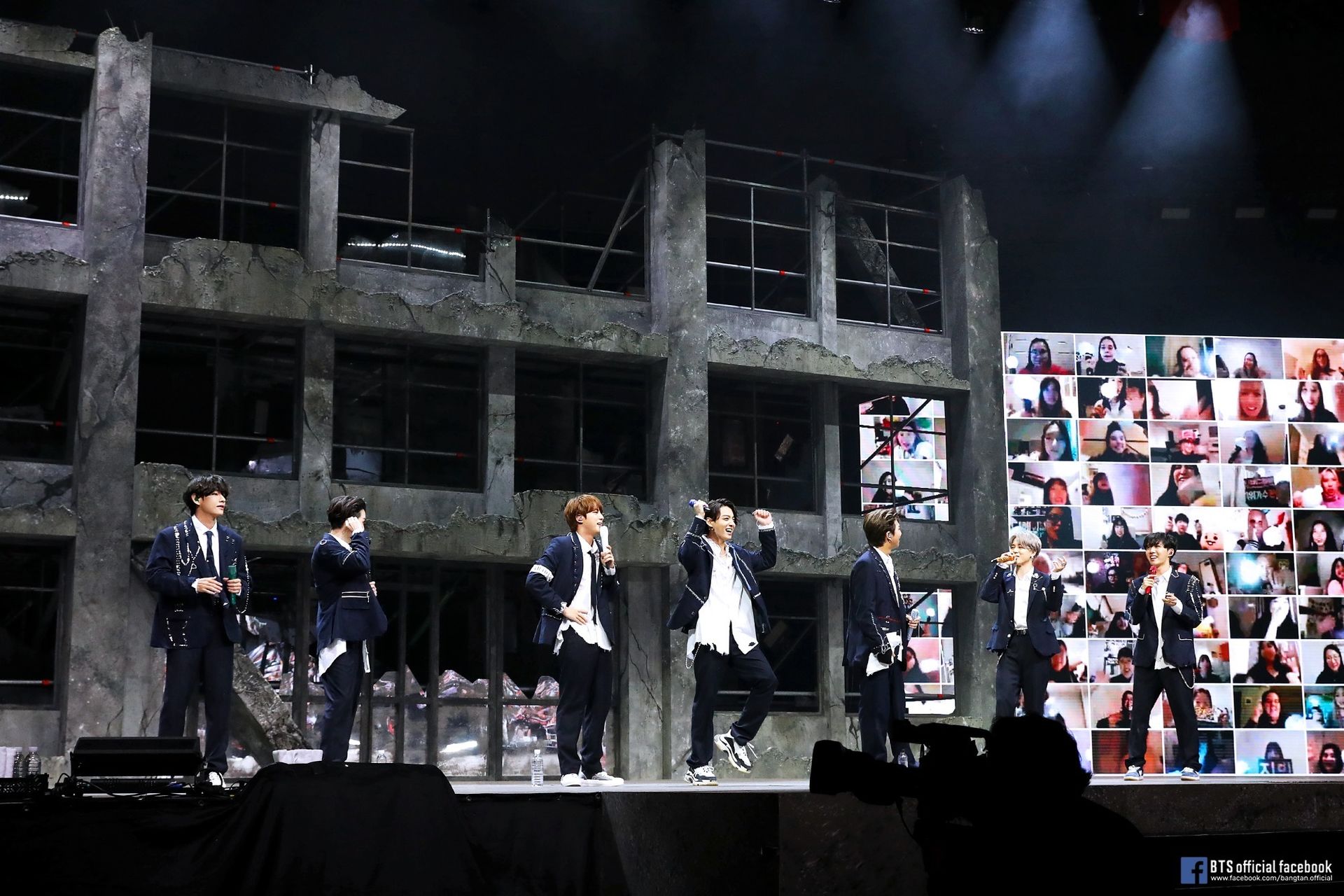 Can you imagine the energy this provides to the performing artist as well as the fans when they suddenly call out your name and say, “Thank you so and so from the Philippines for supporting us! And yes, I love you too!” All because you typed the text, “I love BTS” to cheer them on or did a finger heart and your image is shown on screen for the band. The person behind the screen would be screaming wherever they are watching this that the band saw them.

So the fans see the band, the band sees the fans and while they are all remote, thousands of miles away, the interactive engagement is not lost.

Khee: Our goal is not to just make it a lean-back experience. By using technology, whether it's like the lightstick connectivity, or just a lot of different things, we're trying to reduce that physical space that exists between the band and the audience. 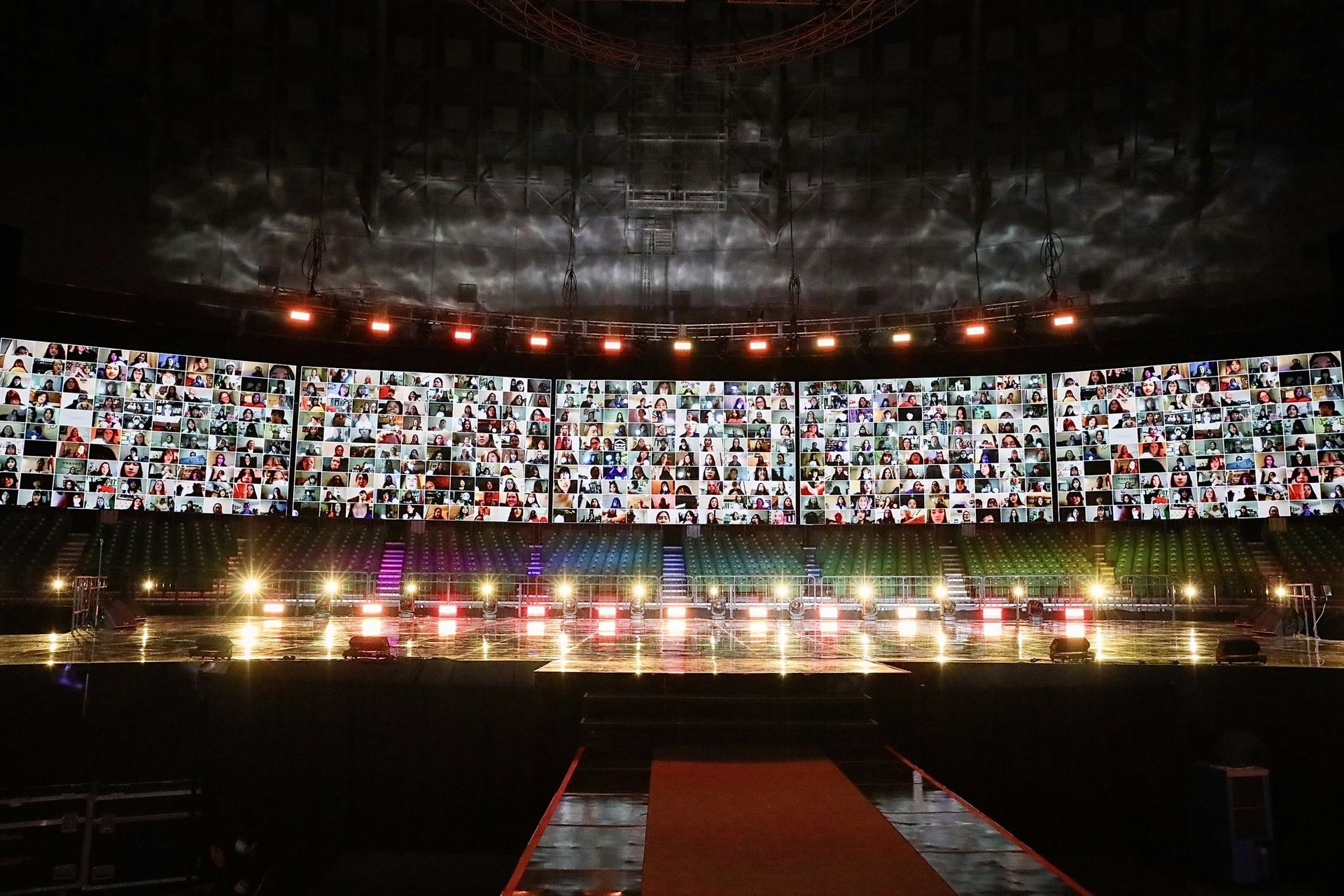 Just like Harold was saying, we're essentially mimicking what happens in the physical concert space.

People tend to focus on ticket sales, but there's really three revenue avenues. So it’s very similar to the traditional concert world where you have sponsorship partners, you have merch, and you have tickets.

And then lastly, what would you say are the most challenging aspects in holding an online virtual show?

Khee: It's global in nature. So the challenge is, you're delivering to almost 200 countries with different network bandwidth capabilities.

If it was one country, it'd be easy. But yeah, it's the global side of it. It's really a challenge. And also, we were managing this locally in Korea and also managing this in the US. So, we are up all night and communicating like crazy. We're not all in that stadium or that soundstage.

We're also trying to help the music industry, as I mentioned, previously, a lot of them were very paralyzed when the pandemic hit, and their livelihoods were challenged, especially with no concerts and no revenue.

We want to let partners know that we're trying to help them find new ways to not only survive but thrive during a pandemic.

Harold: BTS always improve on what they do. That's why they are one of the biggest out there! As Khee mentioned, they review every performance and keep looking at ways to improve. They push us hard to keep improving the audience experience as well.

This interview has been edited and condensed for brevity.