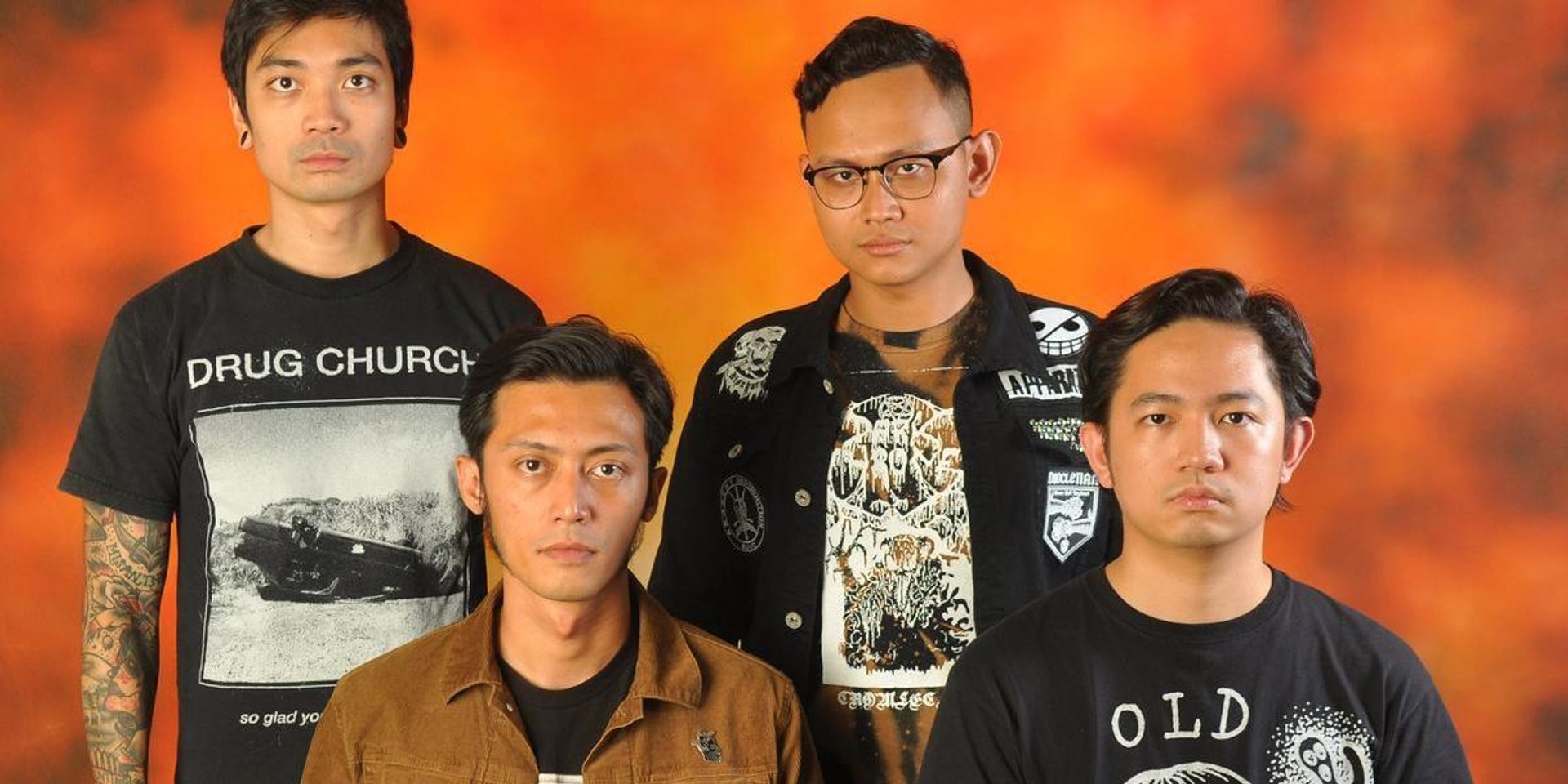 Earlier this year, Marijannah released their debut album Till Marijannah. The exciting emergence of a stoner metal record from Singapore, put together by musicians from punk and grindcore backgrounds, was more than enough to stoke excitement in the scene here, not to mention the endorsements by music sites like Pitchfork and MetalSucks (who premiered the album), and a record deal with Pink Tank Records in Germany.

Life's not easy for independent bands in Singapore in general, but things have been a particular flavour of ugly for Marijannah. In May, the band revealed on social media that they'd essentially been ghosted by their own label, leaving them without royalties and records they were owed.

In an earlier interview with Bandwagon, Marijannah told us that they'd chosen Pink Tank Records out of a bunch of interested labels. "They seemed the most keen and the most relevant music-wise at that time," drummer and vocalist Nick Wong elaborated to Bandwagon. "And most of the other labels who were interested to put it out were reluctant to press it on vinyl because we were new and hadn't even played a show at that point."

All of Marijannah's digital revenue for Till Marijannah – whether from streaming or digital sales via iTunes or Bandcamp – goes to Pink Tank Records, who were supposed to dispense 80% of all sales to the band at the end of every month, and also 20% of each vinyl press run.

Marijannah has only received two transactions that total about a thousand dollars for royalties running from February to April, and nothing else. They also have not received the 60 records (valued at S$1,800 or USD1,317) they were owed from the 300-copy first vinyl press that the band was planning to sell at shows or on tour, Nick told Bandwagon. Marijannah has also had to field queries from fans who ordered Till Marijannah on vinyl from Pink Tank Records and have yet to receive their records.

As Nick explains in the interview below, the band has been told that Jan from Pink Tank Records has been dealing with "personal issues" that have prevented him from getting in touch. "From what I know, every [vinyl] order from May onwards wasn't sent out. This makes it seem like he did not have malicious intent from the beginning otherwise he would have never sent anything out," Nick said. Nevertheless, the band remain dissatisfied – to say the least – with this explanation, and the lack of contact from Pink Tank Records. (Bandwagon's request for comment sent to Pink Tank Records via Facebook went unreturned.)

But fans who want to own Marijannah's music in a physical format shouldn't despair – the band has decided to take things into their own hands, and recently collaborated with Tadang Records to release the album on CD (which comes with a free digital download).

Read our interview with Nick from Marijannah below about the discouraging situation with Pink Tank Records, what impact this has on Marijannah's future plans, and what customers who've been left in the cold by Pink Tank should do.

When and how did Jan from Pink Tank Records fall out of contact with you / stop responding to messages?

The album came out mid-March and he mentioned there was a delay with the pressing plant until early April. He stopped writing any substantial responses by the end of April and I only got sporadic replies in the first like two weeks of May with him telling me he's having personal problems, and that our package was denied and sent back to his home and he would send it back out the next day/week or whatever.

Do you know what's happened to Jan, and why he's not responding?

No. "Personal problems" is what many of the other Pink Tank bands said when they reach out to us. Half of the Pink Tank bands that contacted us were angry and the other half were very defensive about Jan and reiterating that he's a great guy and he's going through stuff and we should all be patient. He wrote a lengthy 'nothing' reply to one of the members of a pink tank band saying he's having personal problems and he's sorry but ultimately explaining nothing. Didn't explain what exactly the problems are, didn't explain why he's been seen as "Active Now" on Facebook Messenger on a daily basis up until a few weeks ago but never read or replied to any of our messages. Didn't explain why he couldn't re-send our package or send out any of the orders made from May onwards. Didn't explain why he couldn't Paypal us our royalties or even change the Bandcamp Paypal recipient email to mine instead of his.

Revenue from sales of the CD go directly to the band, right? When did you decide to get your album onto CD to disseminate your music?

All sales of physical merchandise bought directly from us at shows or from our Bandcamp goes to us. Tandang Records reached out to us to press CDs ahead of our recent SEA tour with Potion and we don't have to spend a single cent on that so why not.

Have any other labels approached you since this situation with Pink Tank has happened?

A few have approached us to press the album on tape and stuff but we just don't see the value in pressing small amounts and posting them from across the world anymore. We haven't been reached out for a vinyl pressing but I don't think anyone, including us, will be keen on that at this point. Vinyl pressing takes anywhere from 4-6 months plus delays, which happens more often than not, plus shipping time and everything, I'm not sure if all four of us will still be alive by the time we get to that.

And finally – how does the band feel about this whole ordeal? Any lessons learned?

Everyone was really really bummed for a long time because the feeling of holding your own vinyl record is priceless and irreplaceable. CDs and tapes are really cool as well but anyone who has had their music on wax before will know what I'm talking about. Also, we've been planning an overseas tour scheduled for October since the start of the year and were banking on record sales and merch sales to purchase the flight tickets. Obviously that's out the window now financially and some of us don't see the point of touring without a physical record to promote at shows. We had a great time on our last tour and actually made pretty decent money from t-shirt and CD sales so we might be able to pull it off, but not receiving our records has been a major fork in the road. Especially knowing someone else has sold almost 200 of it at like 25 euros a piece and we've gotten nothing, not to mention digital royalties. I urge everyone who ordered and never received their record to file a PayPal dispute because you won't be receiving it any time soon.

The lesson learnt is to work with record labels that is operated by more than one person. This is a little unfair to a lot of DIY labels out there, especially those that I've worked with before in previous bands, who have delivered perfectly. But we have to look out for ourselves and insure ourselves in the event of unforeseen circumstances or sudden emergencies at a very bad time. We do have a contract signed but that doesn't really mean anything when we're talking about money that's less than like 10 grand, let alone against somebody from a different continent with whereabouts unknown at the moment.

I know some people will think we shouldn't be angry or mad and that DIY label owners can have personal problems that are more important than a bunch of records, but those people can go fuck themselves because they're not in our shoes and it's the fact that we're being kept in the dark and ignored that's most disturbing, and not the absence of our records. For months, Jan has been shown "Active now" or "Active x minutes ago" on Facebook messenger when I message him daily asking what's up, and he replied previously saying he's having problems and will explain soon but didn't. He's responded to other bands albeit not explaining his situation or the situation with the record label.

We've been giving him the benefit of doubt for months now and it's extremely frustrating being kept in the dark and it feels like we're being cheated of thousands of dollars and the good people who ordered the record who received nothing are being cheated as well. This isn't what DIY is supposed to be and responsibility has been thrown out the window. Yes, I will feel bad if he reappears and said somebody chopped off both his hands so he couldn't type a reply on his computer or his phone until he figured out how to use Siri months later, and I will feel bad if something really bad happened to him that actually physically prevented him from responding to people or carry out his responsibilities as a record label, but until we receive a response, we have every right to be mad at this point.

Buy Till Marijannah on CD via Marijannah's Bandcamp here, and stream 'Snakecharmer' below: