It's the return of Rainway!

But unlike that legendary first edition in 2011, this time around we didn’t have to deal with the mud, thanks to Gardens by The Bay’s astroturf. And of course, six subsequent years of festival experience has taught all of us to bring both ponchos and sunblock, because Singapore’s weather can be fickle and unrelenting.

2017’s edition was certainly a memorable one, filled with plenty of highlights. But naturally, no event is perfect, so we’d be remiss if we didn’t provide some constructive feedback as well. All in all, the good far and away outweighed the bad, which makes Laneway Festival Singapore six for six in our books.

But before we begin with our Highs, we’d like to give honourable mentions to the wonderful performances by Tash Sultana, NAO, White Lung, Mick Jenkins and Jagwar Ma. Even though those incredible acts totally killed it, it really is a testament to the quality of this year’s festival that they didn’t make it into our best of the best list.

CHECK OUT OUR GALLERY HERE

No coupons, no RFID tags, no gimmicks! We paid for our food and drinks the way our fine capitalist traditions have always intended — with cold hard cash (or credit cards).

The most annoying thing about large-scale festivals is the snaking queue to buy coupons... and then the other snaking queue for F&B. Folks tend to buy coupons in bulk simply because they want to skip that hassle, and as a result, attendees are often left with unused, wasted coupons at the end of the night.

Laneway Festival Singapore 2017 bypassed all that fuss with a simple, efficient system that shortened queuing time and heightened everyone’s enjoyment. 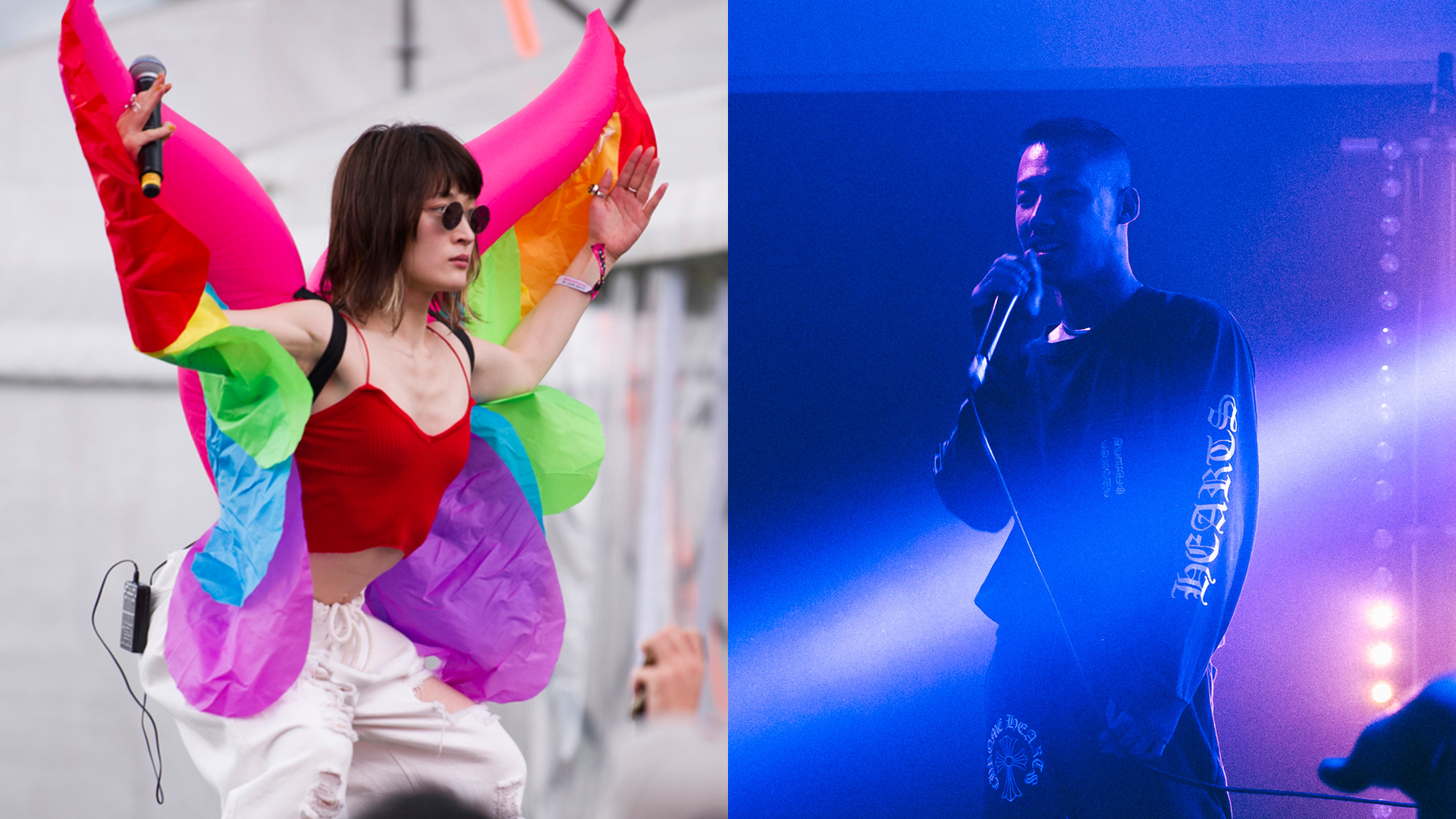 It was heartening to see Laneway include two acts off Japan's sprawling and massive music scene, and both delivered in the best way they could.

Wednesday Campanella — essentially the solo set of frontman KOM_I — provided the early day theatrics, beginning her set on a ladder at the back of the crowd. Not one to leave moments of lull in between, she had handlers carry her to the stage on the ladder as she sang to the crowd — many of whom were visibly concerned about the Japanese singer's balance.

She handled it like a pro and continued through her set with free matcha Kit-Kats thrown to the crowd, dancers in ape costumes, and crowdsurfing in a big inflatable ball (think Flaming Lips). Sure, any seasoned performer could wow a crowd with in-your-face stunts, but to balance that with fun, quirky pop music on a gloomy Saturday afternoon? She's definitely one of a kind.

KOHH, on the other hand, expertly took directions from the live trap playbook, but his unique style and confrontational songs were absurdly fun with a hyped-up crowd. After Sampa The Great's uplifting party, KOHH's dark trap rave stood out as an incredibly unique moment amongst any Laneway edition.

Wow. Singaporean instrumental superband T-REX has never failed to blow our minds, but this might have been their finest hour yet. Spurred by the highest-profile stage they’ve ever been on, these instrumental doyens launched into an epic set that showcased the band’s labyrinth blend of progressive rock and psychedelic jazz.

Soaked to the bone by the incessant rain and wildly headbanging (off-time), the audience at the Cloud Stage was absolutely enrapt by the audacious sonic flourish on display. As drummer Junaidi Kusnong mentioned onstage, their new record is out now, and if you were as impressed as we were, you should definitely check it out. 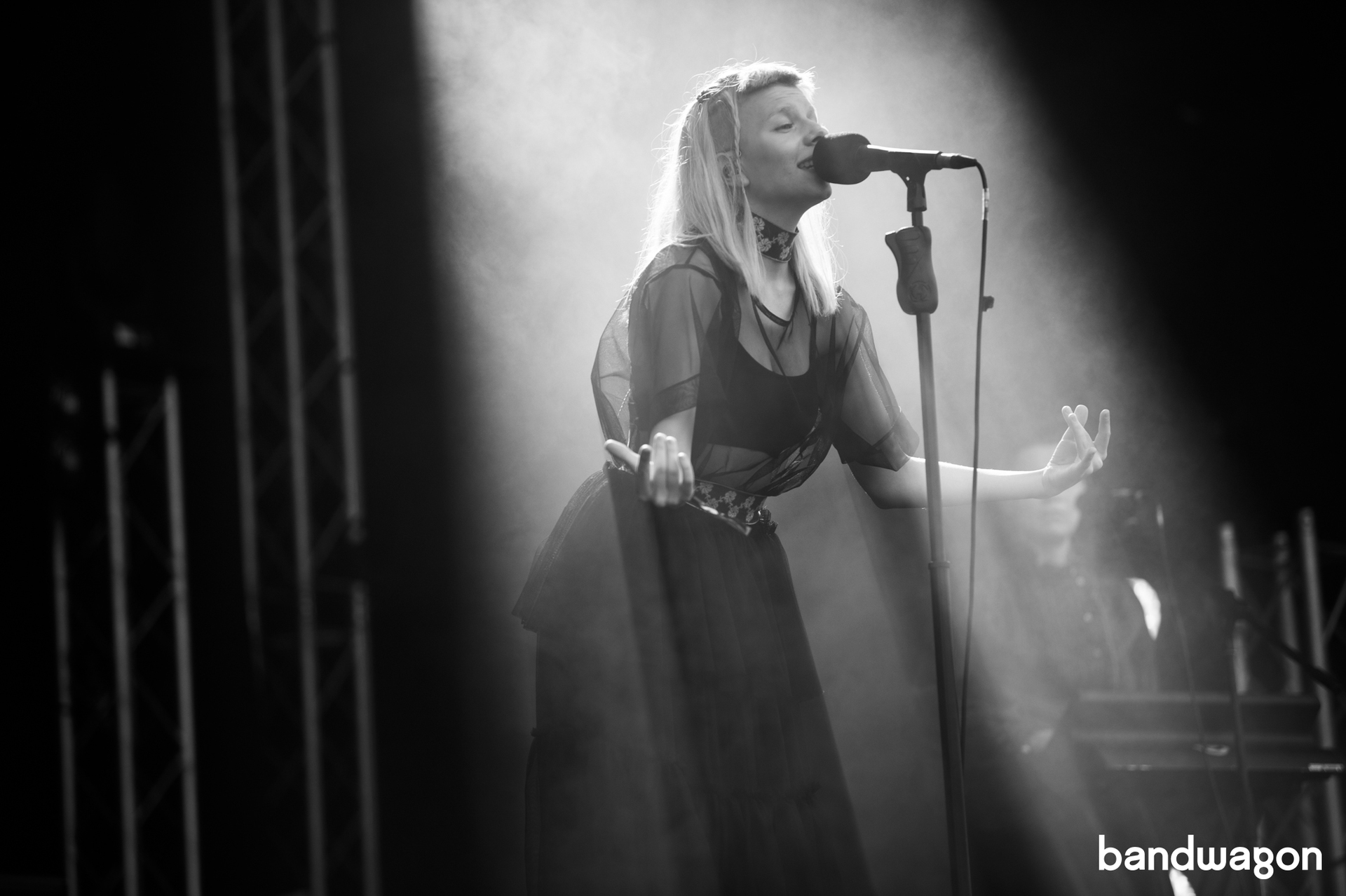 Norwegian dark folk-meets-art pop singer-songwriter AURORA was the sleeper hit of the whole festival. Though she didn’t come in with as much hype as the other international headliners, she was certainly one of the best in show.

Quietly dynamic and entirely magical, AURORA’s set mesmerized from start to finish. A little bit Maya Postepski (Austra) and a little bit Florence Welch, it's hard to imagine such a powerfully affecting presence could emanate from someone who’s barely 20. We’d love to see her back here for a full headlining showcase sometime soon. 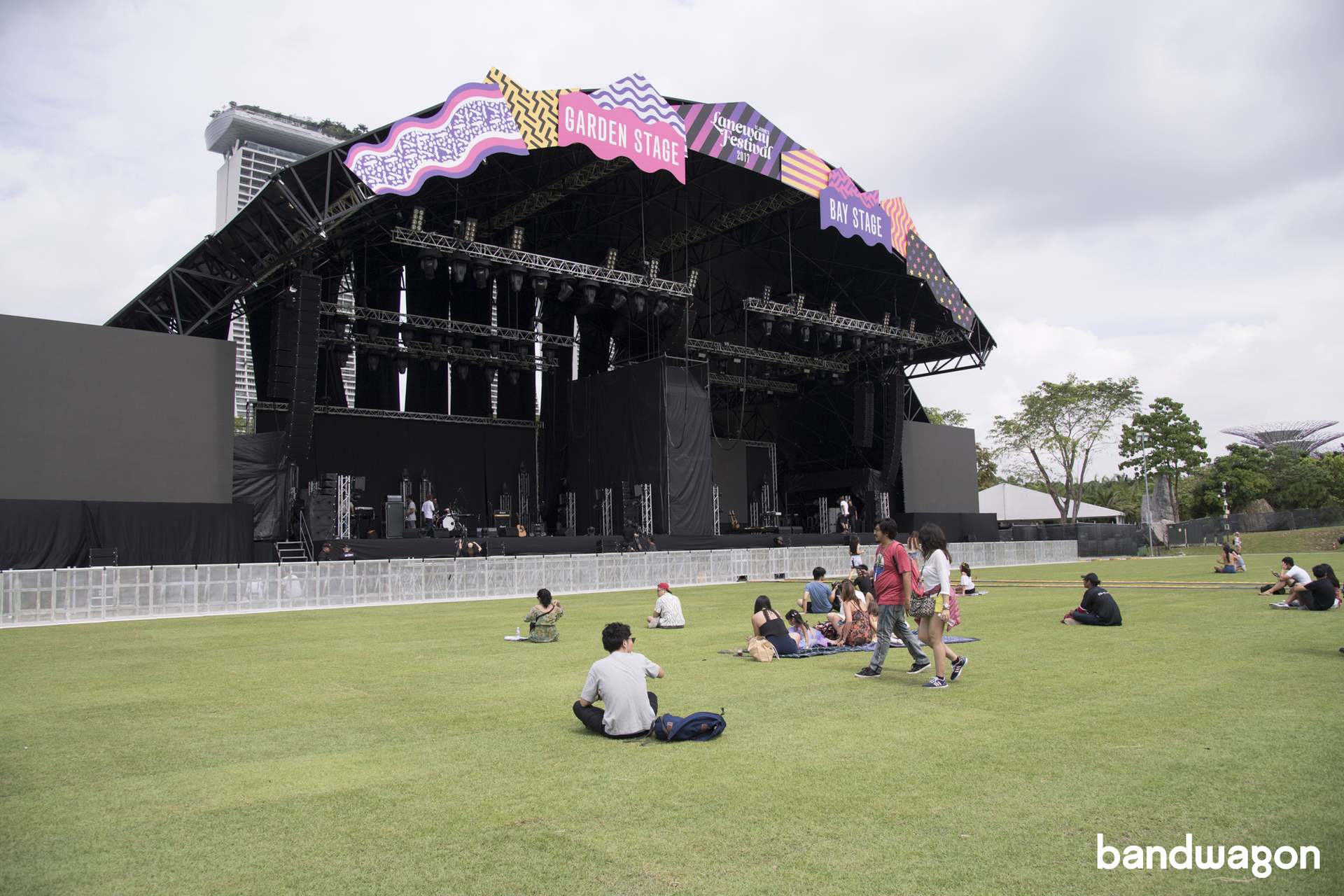 Notice how your shoes weren't ridiculously caked by mud? You can probably thank the crew that maintain Gardens By The Bay. The park's astroturf was an incredible relief that was kind to us even during the heaviest of downpours. Argue all you want about "festival authenticity", it's always better when there's less of a mess left around.

Speaking of which, props to the festival for having volunteers actively hauling around trash bins, and installing recycling stations for festivalgoers to dispose of trash properly. 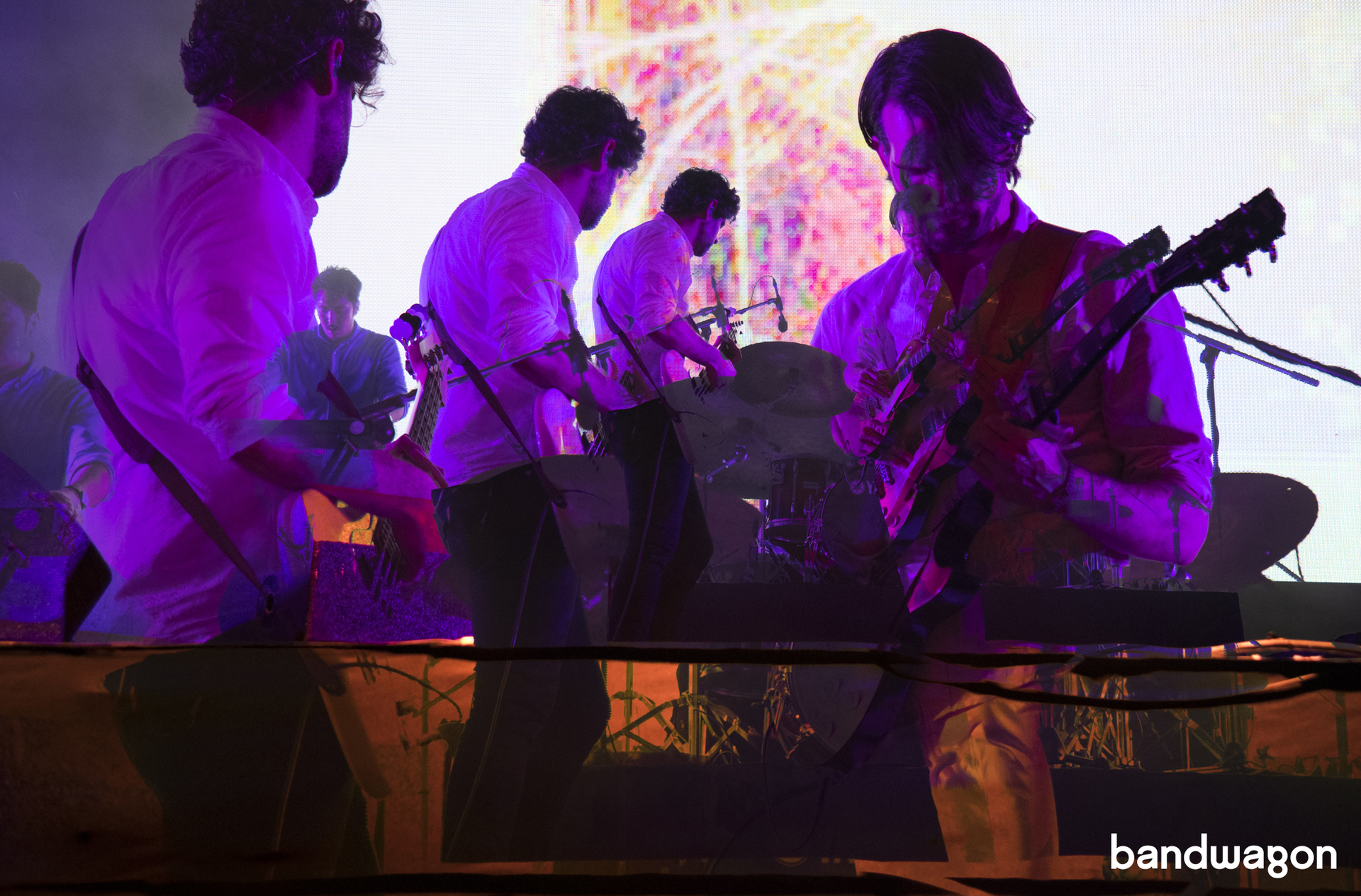 Tycho is an obvious choice as a highlight, but that’s only because he’s so consistently amazing. But as great as his last show here was, the performance was a definitely let down by the acoustic challenges that the Victoria Theatre presented.

Thankfully none of those difficulties were present this time around! The sound was fantastic and so were the fans. In theory, Tycho doesn’t seem like the most energetic band to anchor a late evening set (especially after a long, wet day). But in practice, Scott Hansen’s dreamy brand of ambient IDM and post-rock definitely inspired plenty of carefree dancing in the grass. 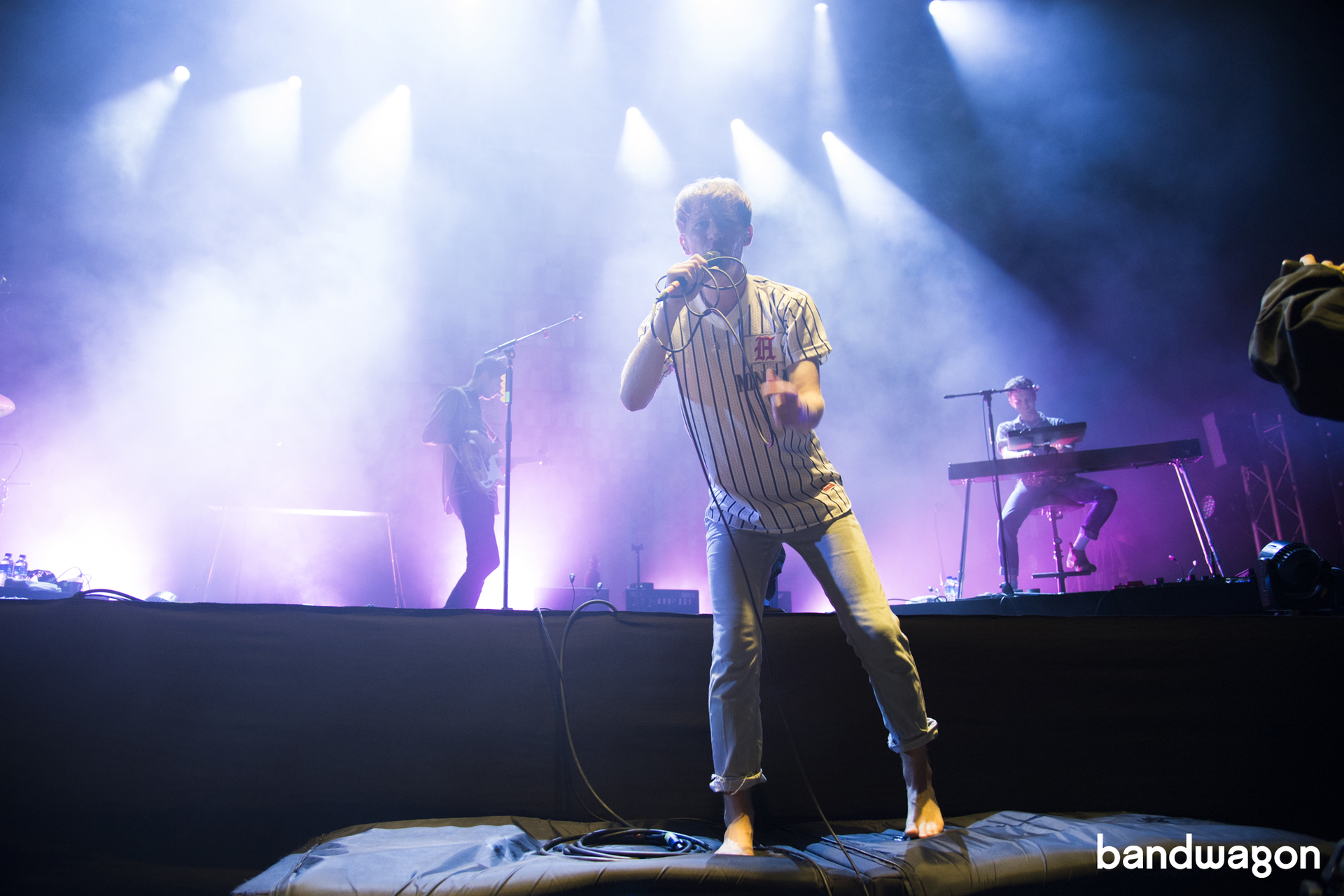 Easily the most sonically fascinating band on 2017’s lineup. Glass Animals’ music has a little something for everyone.

On the surface, sure, they’re indie rock. But then you delve deeper and there’s trip-hop, there’s psychedelic pop, and most prominently, a strong strain of R&B groove to tie it all together. Add that to the fact the band are just absolutely bonkers onstage (singer Dave Bayley is an awkward, frenetic, magnetic firecracker), and the result is a rapturous crowd of thousands dancing wildly to some of the freshest “indie” music produced in a decade. Ten out of ten pineapple shakers for this incredible set. 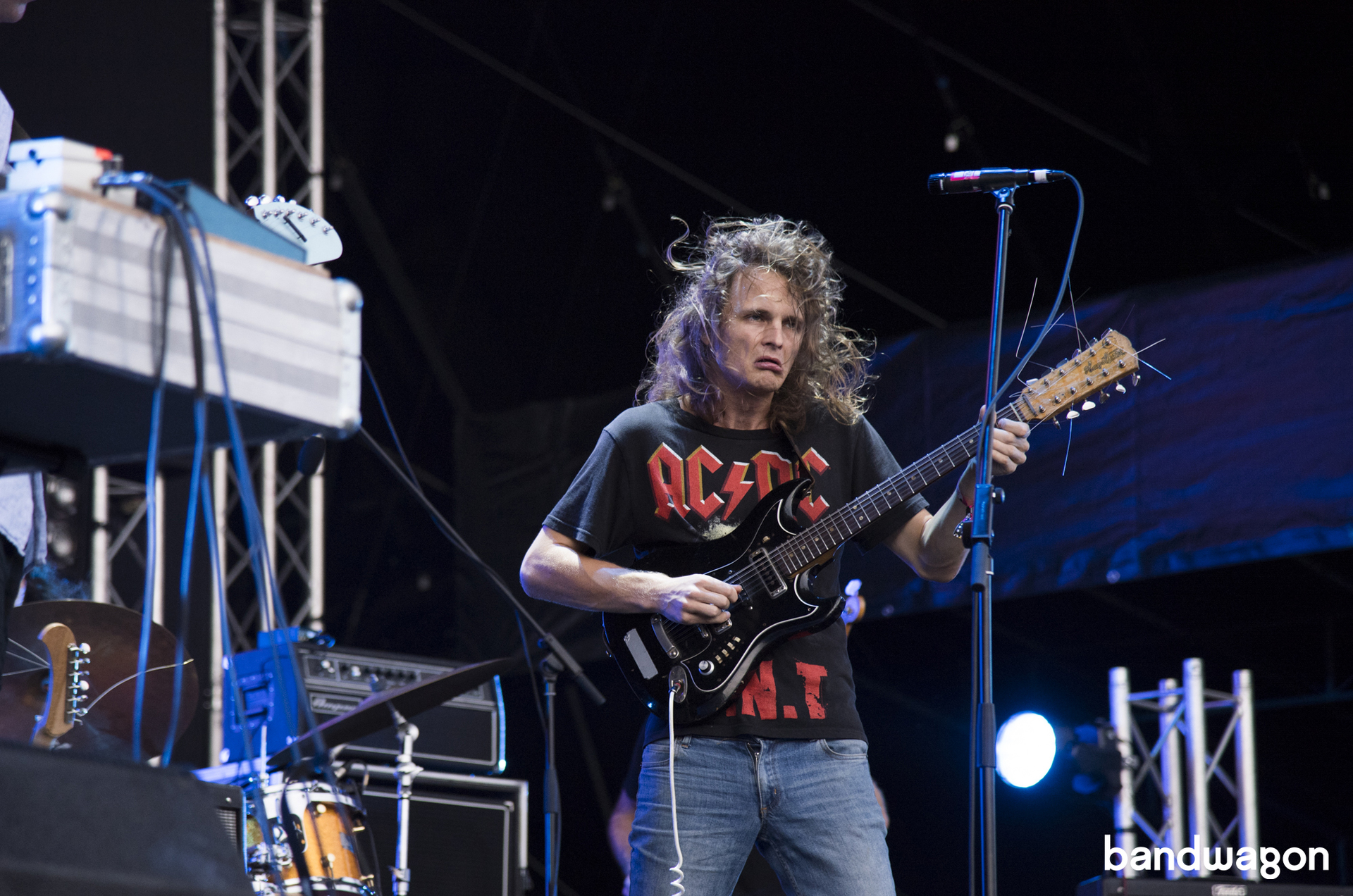 King Gizzard And The Lizard Wizard

This seven-piece band from Australia make no apologies for their massive discography, and their live shows are a true testament to the fact that this is a band that doesn't sleep, and they will probably never need it.

Inciting the biggest moshpit of the day, King Gizzard And The Lizard Wizard never once let up with their frenetic and eclectic style of psychedelic rock, beginning their set with three songs off their absurdly fun latest album Nonagon Infinity. Never mind they had two drummers — a stunt in rock rarely pulled off with finesse — or the fact that their set might be considered too heavy for some: everyone was dancing and the crowd was visibly increasing through their set. We need them back. 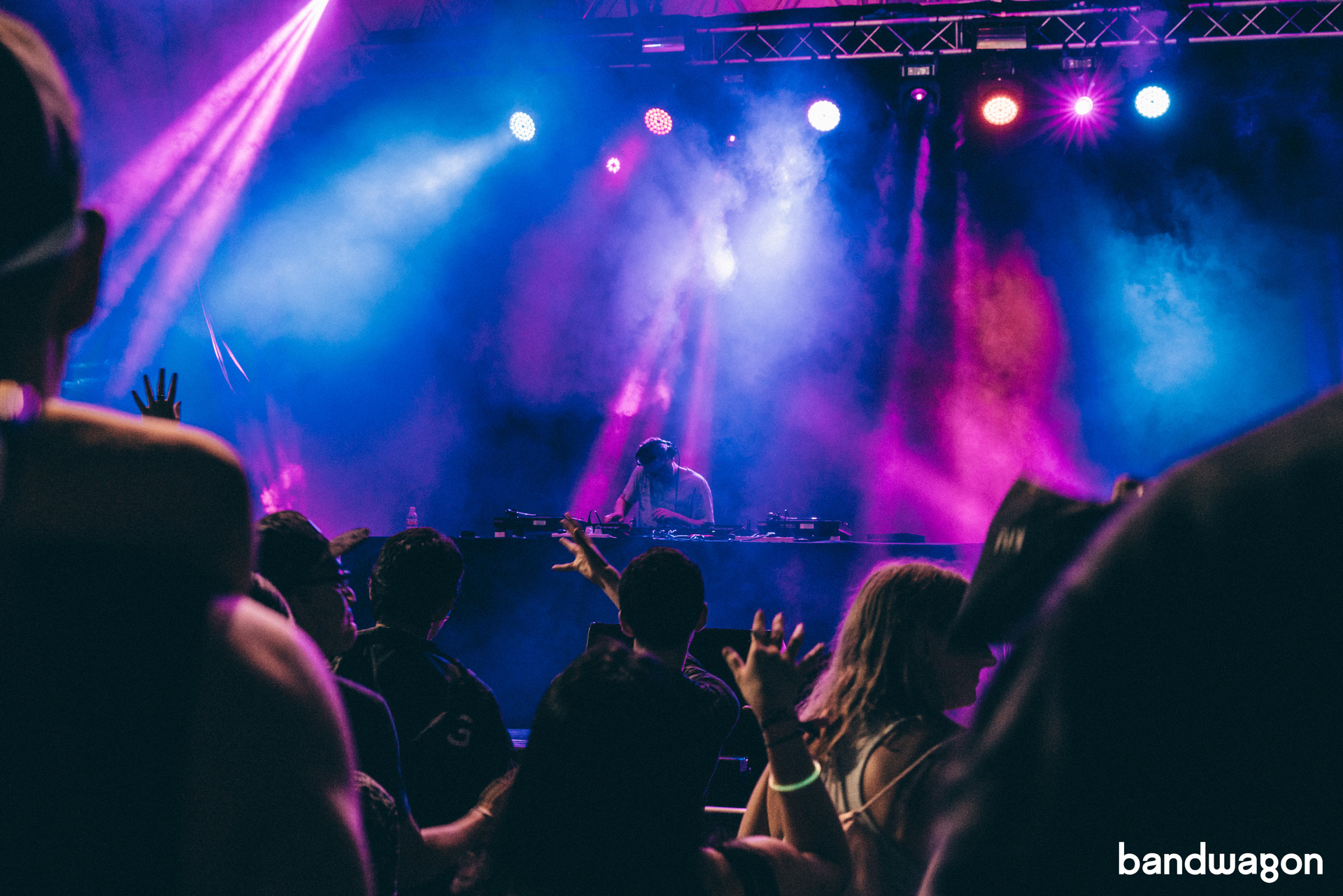 Capping off the Cloud Stage while Nick Murphy entranced everyone at the Bay Stage, Floating Points proved his worth as a bonafide selector and DJ, as much as he is an excellent music artist.

Digging through some of the deepest, hardest and most obscure funk and disco you'll ever hear, his set was a music nerd's fever dream and a deliriously fun one at that. A nice respite from the bass-heavy music that dominated most of the festival, Floating Points gave festivalgoers more than a reason to stay despite the tiring day. 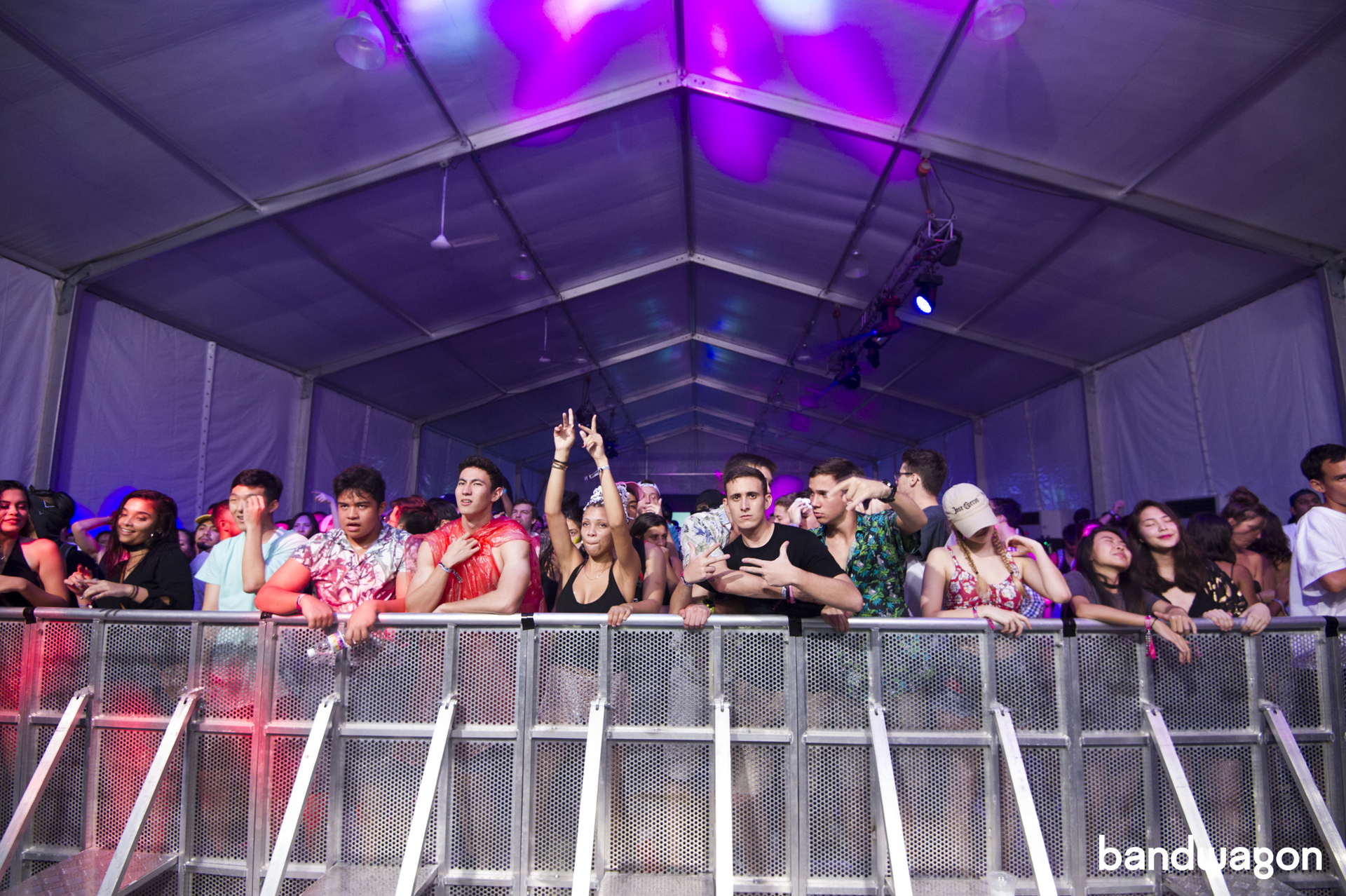 If you recall, the addition of the White Room was one our biggest highlights from Laneway Festival 2016. And don’t get us wrong, we had zero issues with the artists there. In fact, the addition of exciting international hip-hop acts is probably the coolest thing Laneway did this year.

However, we couldn’t help but notice that the White Room felt a little smaller this time around and that sadly affected the many fans who were interested in seeing Sampa The Great (even we couldn’t get in). The Zambian rapper-poet packed the room to max capacity (which is great for her!), but that also meant that there was a substantial queue outside who had to settle for listening to the set from afar. The sound within the room was also inconsistent, most obviously during Mick Jenkins’ set, which was so boomy that we had trouble hearing the rapper himself.

Quality-wise, Laneway Festival 2017 definitely delivered. Most of the lesser-known bookings were downright inspired and refreshing, to be honest. But when it came to compelling headliners, we have to admit this year’s edition did fall a little short. We don’t mean that they should start relying on big-name blockbuster acts though — we just found that this year’s Laneway seemed to miss out on some of the more notable, zeitgeist-defining acts of 2016.

Names like Angel Olsen, Anderson .Paak, Solange, Mitski, Chance The Rapper, Christine And The Queens and Car Seat Headrest (for example) all fit well within Laneway’s programming ethos — and best of all, any one of them could have been the tentpole draw 2017’s iteration needed. 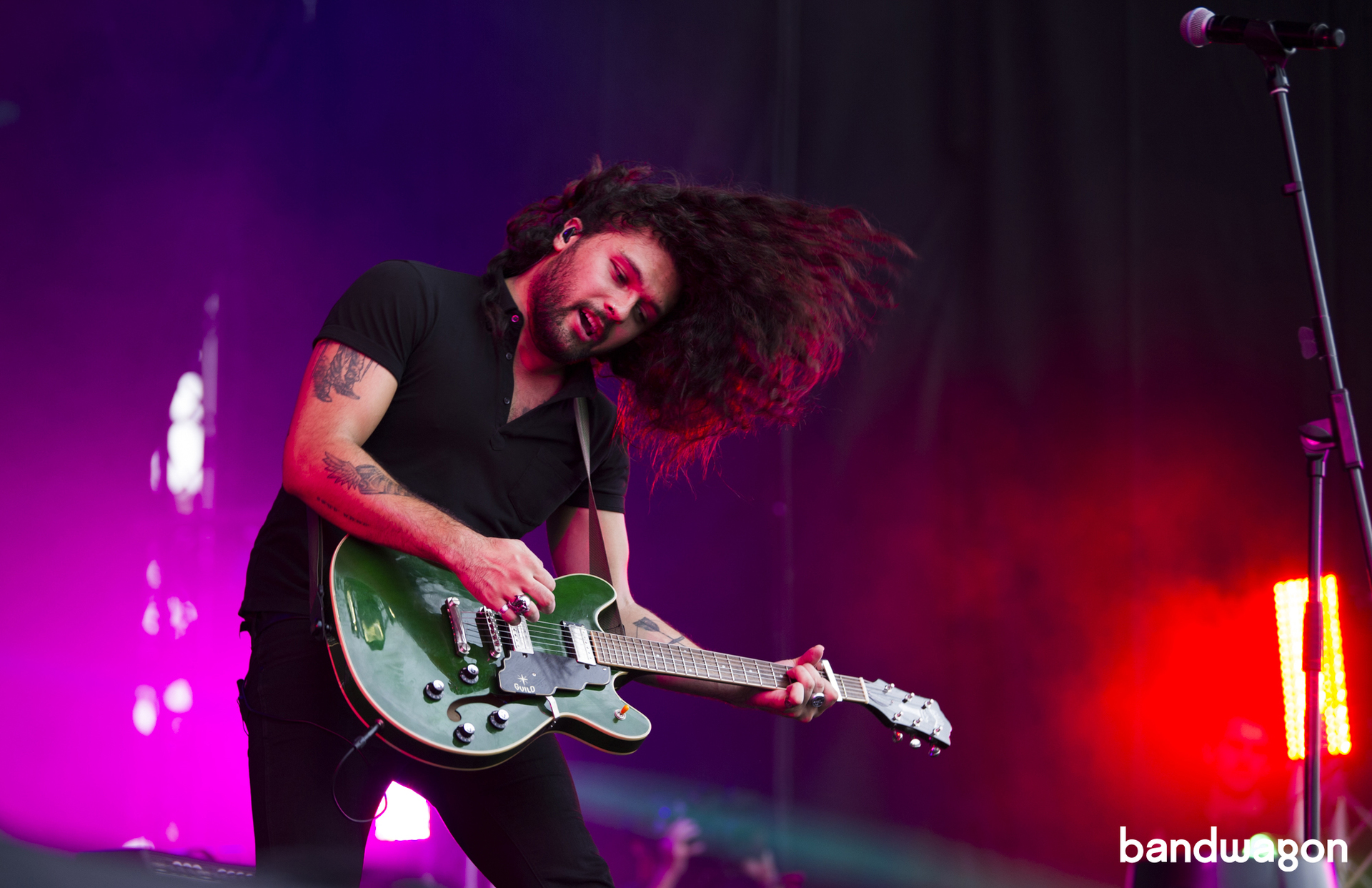 While we understand the gloomy weather was a drawback to remain outside, it felt wasted as bands like White Lung, Gang Of Youths and Luca Brasi played to half-decent crowds — all of whom performed excellent sets that would have otherwise drawn plenty of fans around the world.

Yes, while his DJ set was nothing short of a funk revelation, we couldn't help but feel that watching him perform with his live band would've been an even greater, more exquisite experience.

His jazz-influenced brand of electronic music shined greatest in 2015's Elaenia, and it would've been amazing to hear some of those songs in a live setting, especially when fully fleshed out by a seven-piece band.