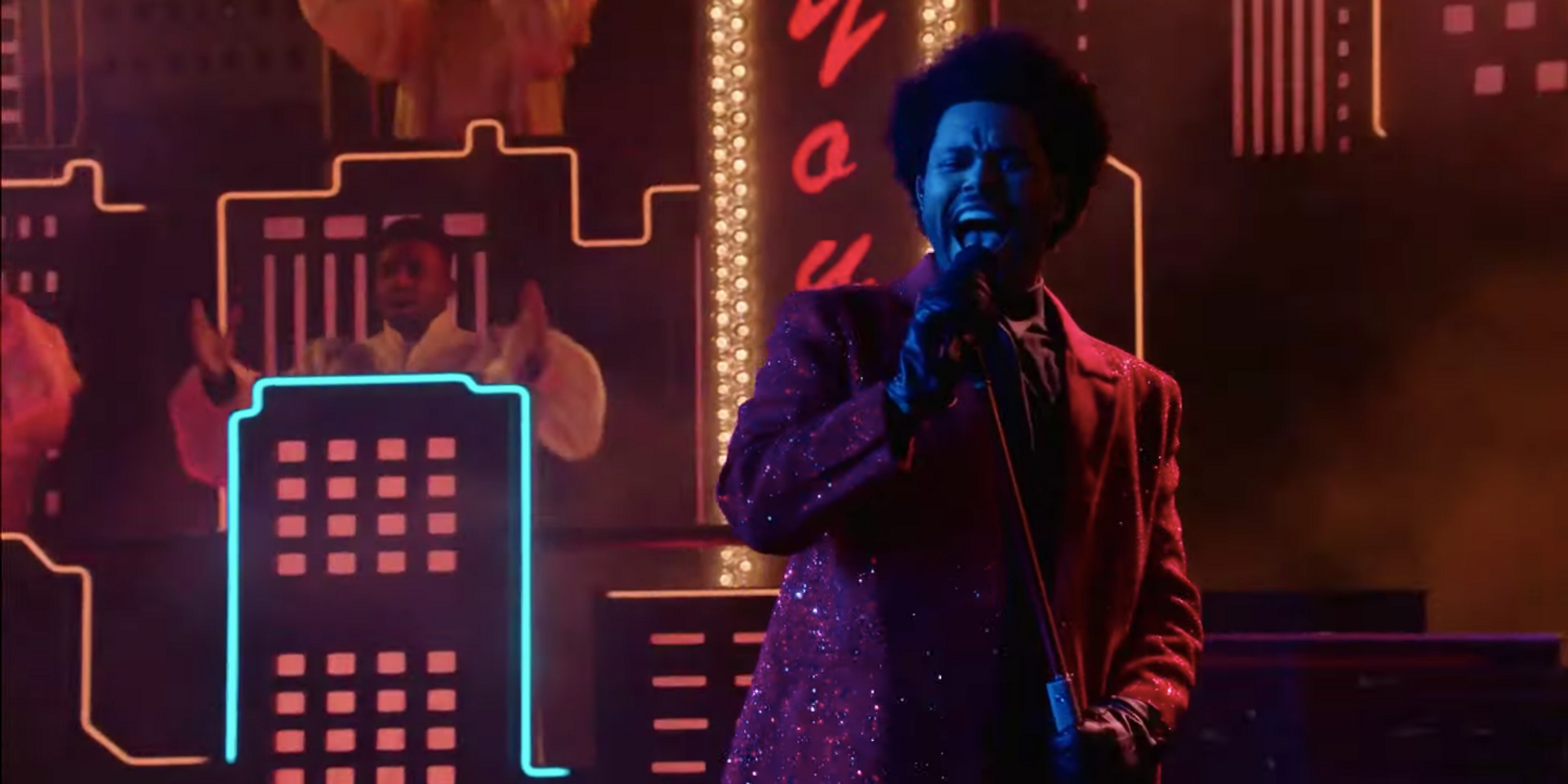 The Super Bowl Halftime Show is one of the most highly anticipated performances every year, and 2021 is no different.

Gracing the stage of Raymond James Stadium for this year's show, The Weeknd wows the crowd, both live and at home, with a grand performance like no other. Backed by a live band and choir, a legion of men dressed in a red glittery blazer, and a neon skyline, the R&B singer took viewers on a journey through the "absurd culture of Hollywood," narrated by a medley of his top tracks.

The Weeknd performed his tracks 'Starboy,' 'The Hills,' 'Can’t Feel My Face,' 'I Feel It Coming,' 'Save Your Tears,' 'Earned It,' 'House of Balloons / Glass Table Girls,' and 'Blinding Lights.'

Unlike previous Super Bowl performances, the After Hours act mainly performed from the stands before ending his set on the field. The show comes as the first performance from The Weeknd this year, following his performance at the 2020 American Music Awards, and after speaking out against his Grammy Awards nomination shutout.

Following the performance, fans took to social media to share their praises for The Weeknd. Even Canadian Prime Minister Justin Trudeau and Toronto Mayor John Troy shared their admiration for the Canadian act online.

Congratulations on rocking the world’s biggest stage, @TheWeeknd - you’ve certainly earned it. Hope you heard all the cheers from back home. 🇨🇦 #SuperBowlWeeknd

Incredible performance by @theweeknd at the #SuperBowl #PepsiHalftime show.

From Scarborough all the way to the world’s biggest stage.

Check out how fans reacted to The Weeknd's performance below.

Me when Abel dropped House of Balloons during the #PepsiHalftime show. 👏🏼 pic.twitter.com/eRxHHQPABR

#SuperBowlWeeknd DELIVERED! That was awesome! :) Love that Blinding Lights was the finale and those visuals 😘👌 Always has me dancing :) pic.twitter.com/1iCR6cFj9W

The moment I felt my heart swell. I'm so proud of this performance. He gave us visuals, vocals, classics, hits, and a story.

This is one of the best, most planned out, Superbowl halftime shows I've ever seen. Hats off to you @theweeknd. You killed it. #XOTWOD #SuperbowlWeeknd pic.twitter.com/vFPauwdc0Y