Some of the most exciting acts in the K-pop scene will be brought together for a one-day-only virtual music festival this June.

Named K-Pop SuperFest, the event — which will be held at 9 PM ET on 19 June (9 AM SGT/PHT on 20 June) — is a joint venture between live streaming platform Sessions and Joy Ruckus Club, an Asian American-led concert series.

On 28 May (ET), the K-Pop SuperFest's organisers unveiled the star-studded performance lineup for the festival, which includes prominent names such as boy groups AB6IX, THE BOYZ, Cravity, and Golden Child, girl groups MOMOLAND and Lovelyz, P Nation acts Jessi and Heize, K-pop superstar Rain, singer-songwriter Ailee, DJ Soda, and rapper Bloo. The event will be hosted by 'Bomb' hitmaker AleXa and THE BOYZ's Kevin. 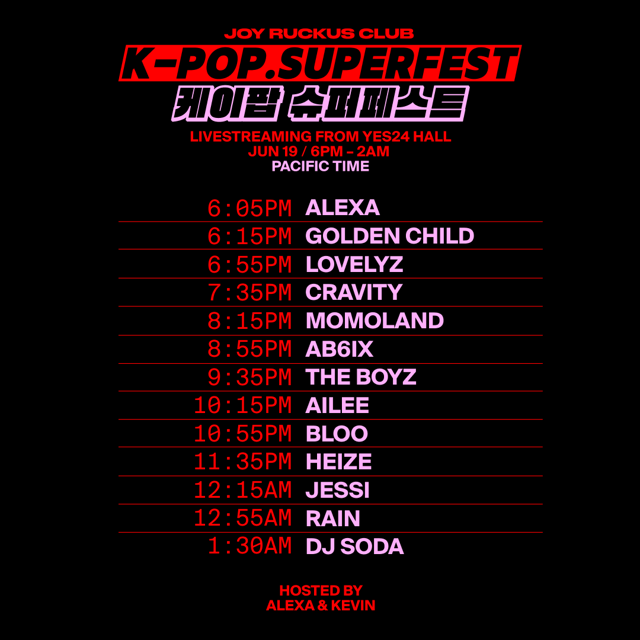 Billed as one of the biggest K-pop festivals in the world and the largest virtual K-pop festival in the West, K-Pop SuperFest will also bring fans closer to their favourite artists through online 1-on-1 meet and greet sessions.

Additionally, merchandise such as event t-shirts, autographed posters, and even NFT videos will be available for purchase via the participating artists' stores on Sessions as well as that of the event.

“Sessions’ growth is rapidly accelerating across Asia. The K-Pop SuperFest represents another milestone as we bring even larger events to fans across 194 countries and 18 languages. Sessions' unique combination of gamification and marketing is driving attendance and revenue for artists at an unprecedented level, and our partnership with Kublai [Kwon] and Joy Ruckus Club continues to deepen,” said Sessions' co-founder Tim Westergren, who is also one of the co-founders of music streaming platform Pandora.

K-Pop SuperFest will be livestreamed from the Yes24 Live Hall in Seoul, South Korea. Tickets are now available at US$20 via Sessions.