In this edition of Artist x Artist, Filipino musician Degs De Guia sits down with Michelle Zauner of Japanese Breakfast for a quick conversation on music for video games, Korean musicians worth listening to, and making an album full of bops.

Ever since my dad died this month, 10 years ago, I’ve been crying to music that talks about losing a loved one—from Death Cab For Cutie's 'What Sarah Said' to Touché Amoré’s 'Stage Four'. But no other artist helped me cope with loss the way Japanese Breakfast did.

💙 this song. a great way to remind oneself that we really have to choose to be kind despite our losses. ty @Jbrekkie https://t.co/VkCJWHJ9WY

I vividly remember hearing 'The Body is a Blade' for the first time last October 2017. It reminded me that despite our grief, we have to keep moving and make more bops.

It’s now 2019 and the show must go on, with Michelle [Zauner] taking on different pursuits like scoring an instrumental soundtrack to an upcoming video game, directing music videos, and writing a book. It’s wonderful to witness such a hardworking artist expand their craft. I really wanted to be just like her.

I sat down with Michelle to talk about her next record, pop music, and briefly, Carly Rae Jepsen. 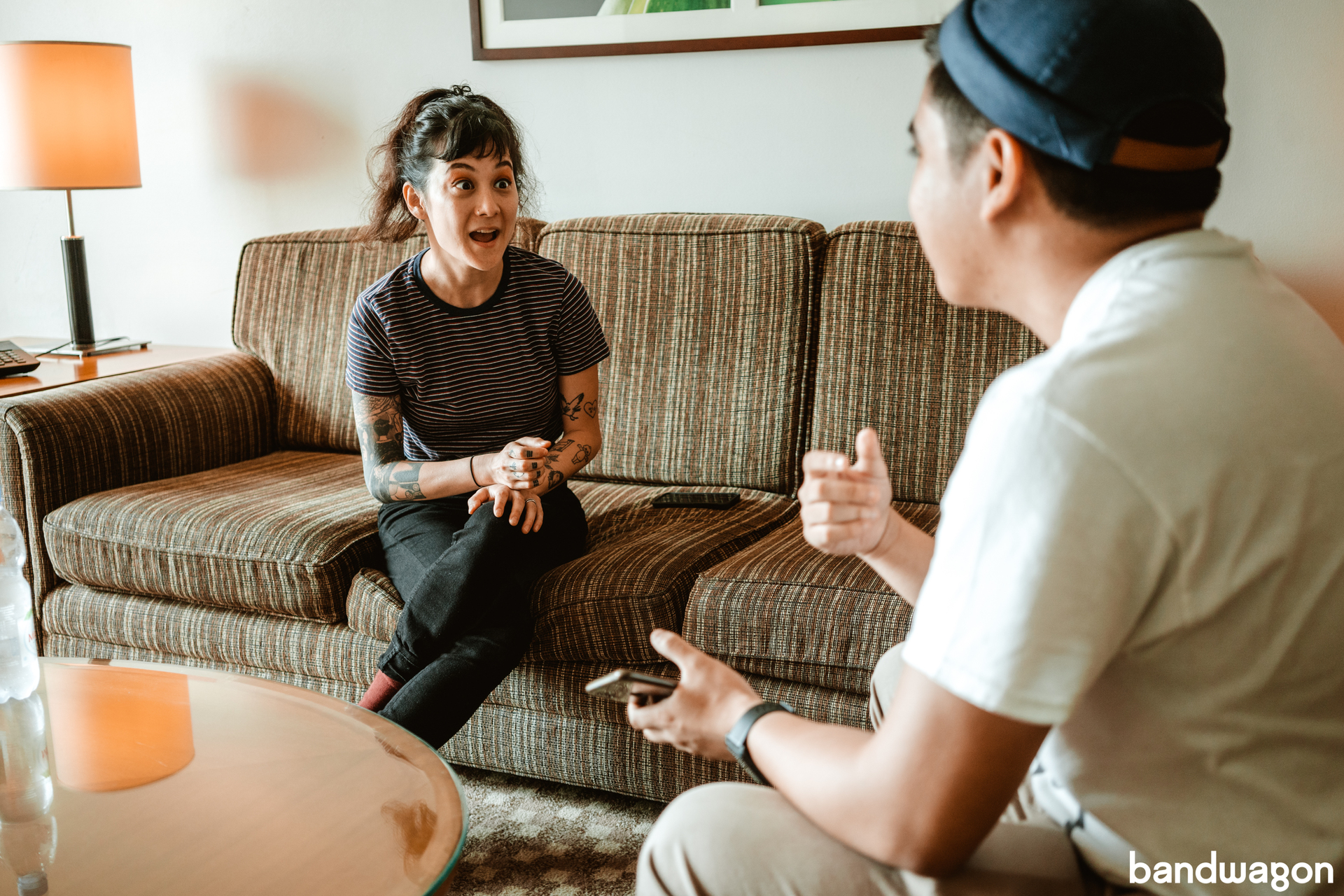 Michelle: The flight is only three hours, but we were in the car longer than the plane. It’s crazy, 'cause it was, like, three miles—but then, it took so long.

Degs: That’s every day [for us]. Especially [on] Fridays. Anyway, I’m gonna ask you a couple of questions about the usual stuff—like music and your approach to it. We’re doing an artist-on-artist interview. I’m a musician and I’m in a band, myself.

I actually got to watch you in San Francisco at the Great American Music Hall. So, how’s your Asian tour so far? Is it your first time here?

Degs: But is it your first time in Southeast Asia? Like Singapore...

Michelle: We haven’t done Singapore, or the Philippines, or Indonesia. But we did Thailand last year.

Michelle: I loved [it]… Singapore was one of my favourite shows. It was so fun. It was like, the most giving, enthusiastic crowd. So yeah, I told my label that I really wanted to put a lot of focus and attention on the Asian market. Just as an Asian-American, it’s really fun for me to come here. I just feel like there would be a greater international response for us to come to Asia, rather than go to Europe over and over again. And I think a lot of labels aren’t supporting that so much. It’s just a very new market for indie labels in the US, so in 2017 we did all [of] these places. And then afterwards, the Philippines, Indonesia, and Singapore were like, the loudest of, “Why didn’t you come here???” So, that’s why I was like, when we come back, we have to play these places! A lot of people online were really asking us to come here. So that’s why we really wanted to make sure to make it out to these places.

Degs: That’s cool. I’m pretty sure everyone is so happy that you came over.

Degs: Did you get to play any new songs on this tour?

Michelle: Yeah. We’ve been playing a few new songs. We don’t have too many that people haven’t heard, but I think, since this is a festival slot, we’ll probably play older material. It’s a short set: 45 minutes. We have two records, so I feel like we have to play the songs that they know or are familiar with.

Degs: Aside from the album, you also did music for Sable.

Michelle: Yeah. I’m working on it!

Michelle: No, it’s gonna come out next year.

Michelle: It’s extremely different. With Sable, it’s largely instrumental, kinda ambient music, and Japanese Breakfast is more or less a pop band. It has a very specific structure that I worked on for a long time, you know—verse-chorus-verse-chorus. But with Sable songs, it’s an open-world game that has to be not… like, you don’t wanna hear a hook over and over and over again. You have to have this kind of sprawling, meandering music. So it’s just a totally different process, but even in the last two Japanese Breakfast records, there are ambient, instrumental tracks, and I really enjoy writing that way. It’s just a very different process.

Degs: Has it been a challenge on your end?

Michelle: It’s just been really enjoyable and fun. The developers are very hands-off and very encouraging for me to just make what I think sounds good, so it’s been just a really positive, fun, good experience.

Degs: It sounds like fun. Are you open to scoring other video games in the future? 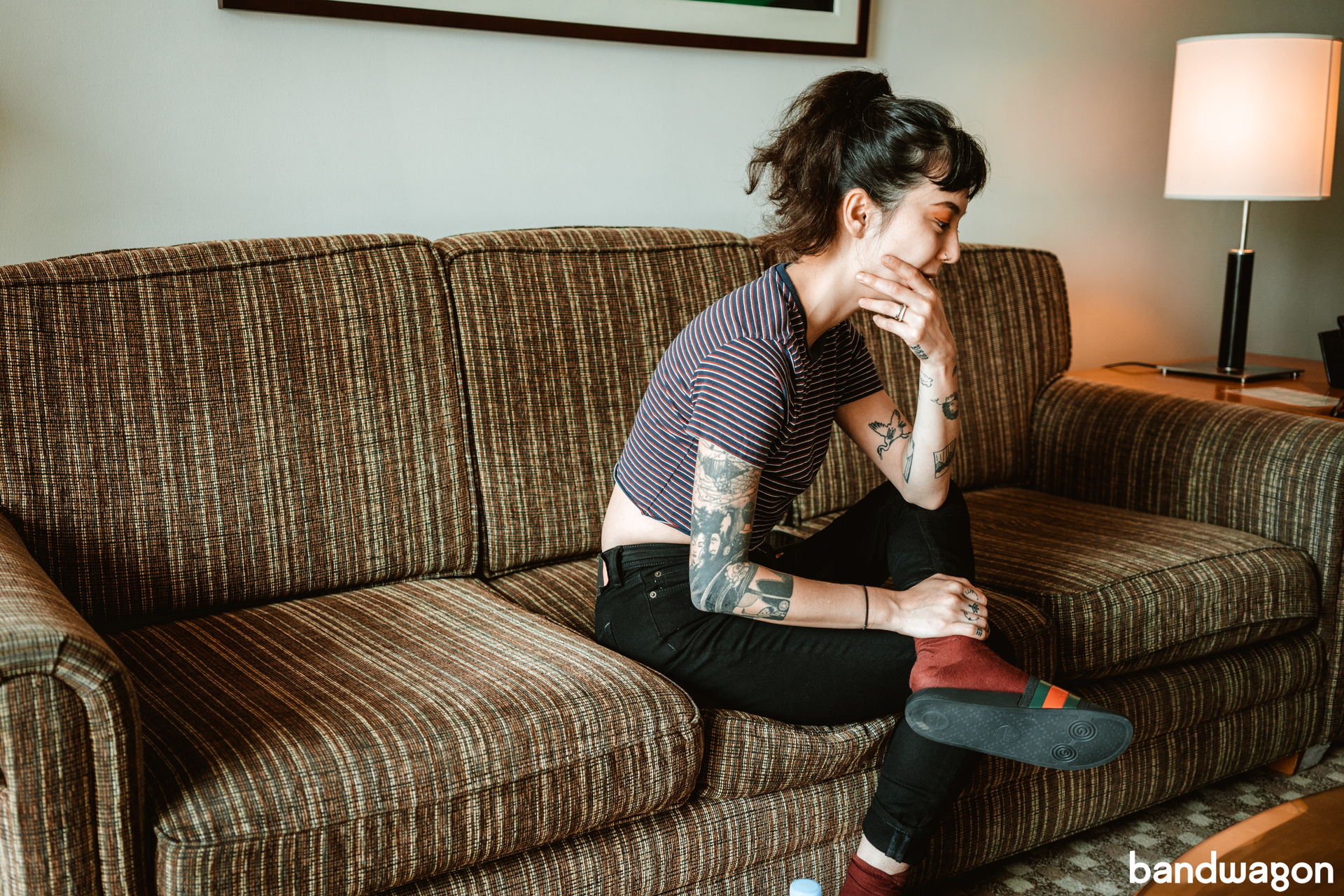 Michelle: Yeah. It has to be really… right now, I’m just so busy but I knew I wanted to do something [like this]. I love video games and I would love to do more video games in the future, but I think that it had to be Sable first because it’s just such a special, beautiful project, and the team is made up of just the most brilliant people I’ve ever met. So I’m really, really glad that they’re the first people that are kind of bringing me into this world.

Degs: That sounds so nice. As a video game fan myself, I wish I could make music for video games. I’ve watched your recent feature on Munchies, talking about Korean food, amongst other things. I’ve also read in different articles that you’ve tried to keep in touch with your Korean heritage through food. Have you ever considered trying to translate that into your music? For example, going through traditional Korean music?

Michelle: I’m actually not super familiar with that. I haven’t thought too much about it. I think, for me, food is really linked to my childhood and my relationship with my mom. The music parts of Korea weren’t things I was really exposed to when I was younger. There are some Korean artists that I’ve really grown to like, Shin Joong-Hyun, Kim Jung Mi, and the Pearl Sisters, and I really like those kinds of ’60s, '70s sort of bands that came out of there. When we were in Korea for a little while, I met a lot of really cool indie bands like Parasol and Say Sue Me. It’s a really inspiring scene. I think, more in that way, I can be inspired by Korean music. I don’t know too much about the traditional instruments.

Degs: In terms of writing music about a lot of personal stuff, on your end, how do you find the courage to write these kinds of songs? Coming from someone who’s lost a loved one, it seems a bit hard to do, I guess. How do you go through it? 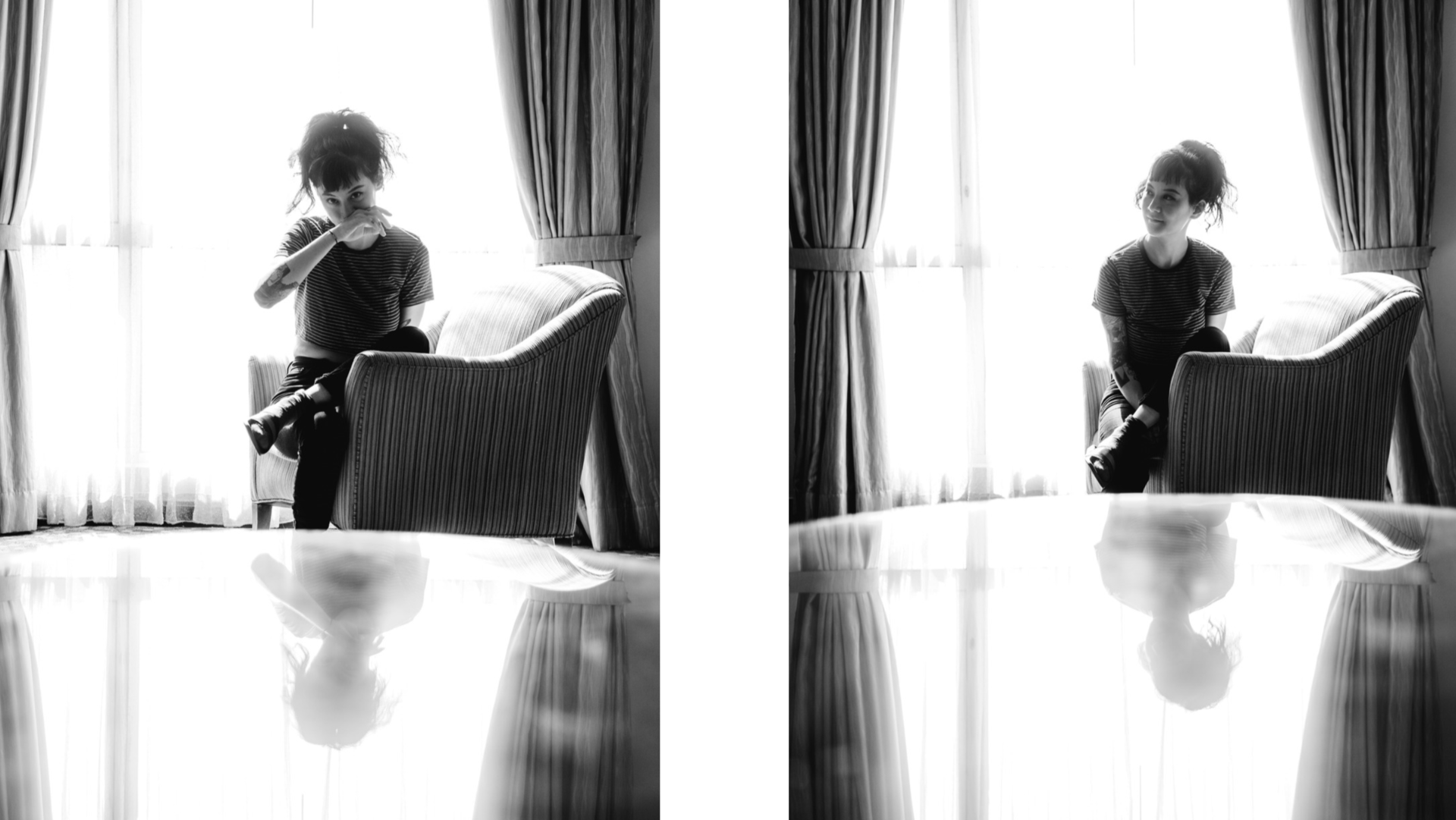 Michelle: I don’t really know how to write in any other way. I think, that, for me, writing music has always been therapeutic and helpful for me to kind of compartmentalize what I’m going through. I don’t write music and think about anyone else, really. I don’t think about how other people are going to perceive it. It’s actually a very free art form. Whereas, like doing the Munchies thing or like, writing a book—there’s more risk, almost, like how people are gonna interpret those very standalone things. Like, there’s nothing to hide behind.

Whereas with music, like lyrics, like there’s not so many… I think you get like maybe, 70 words in a song. So there are so many different ways to interpret those words, and so many things to be distracted by and focused on that aren’t the actual lyrics. So, it’s not so scary for me. It’s just always been life written in songs.

Degs: Are we expecting a new record coming out soon?

Michelle: I think I’ll probably start working on the next record in the fall. It’ll hopefully come out early next year.

Degs: You’ve also released, well not really a new song, 'Essentially'. You wrote it in Bali? It sounds well, personally, it’s a bop.

Degs: Are we gonna hear a lot more about those kinds of sounds in the next record?

Michelle: I think so. I really fell in love with electronic production and what we’re able to do with synthesizers and computers. You know, I think that it’s just something that I’ll – now that I have more confidence in it – I want to integrate more for sure. I think that the albums have gotten more electronic over time, so it seems like a natural fit. I mean, I always try to write a bop! I do hope that the next record is full of bops, that kind of album.

Degs: I can already see it now. "New Japanese Breakfast album.: It’s a bop! 10/10." Which reminds me, since you consider yourself a pop artist, who are the current pop artists that you’re listening to?

But I think for me, I actually tried my hand at writing music for other musicians, like potentially pop artists. I realized there was a certain place I wasn’t able to go because there is a certain cheeseball factor of pop music that I’m not interested in making at all. I think that sometimes you have to go there if you have to make something on that kind of level, you know? You know, like the fucking new Taylor Swift song. It’s so fucking bad. You know? But so many people love it and it’s like you can just hear the math happening of how they calculated to make that [song]. I hope that I don’t get fucking tweeted to shit after saying that. But yeah, there’s like a certain place that I’m not willing to go, I guess. But, yeah. I think pop music is good. (laughs)

Degs: Theoretically, would you consider covering or writing songs for… Carly Rae Jepsen?

Michelle: I don’t think that Carly Rae needs me… [Do] you know what I mean? I also really love Carly Rae and I don’t think I could write music like that. I think for me, it just needs to be a little more grounded, but I can appreciate what that is and really enjoy it. And I think there is substance there. 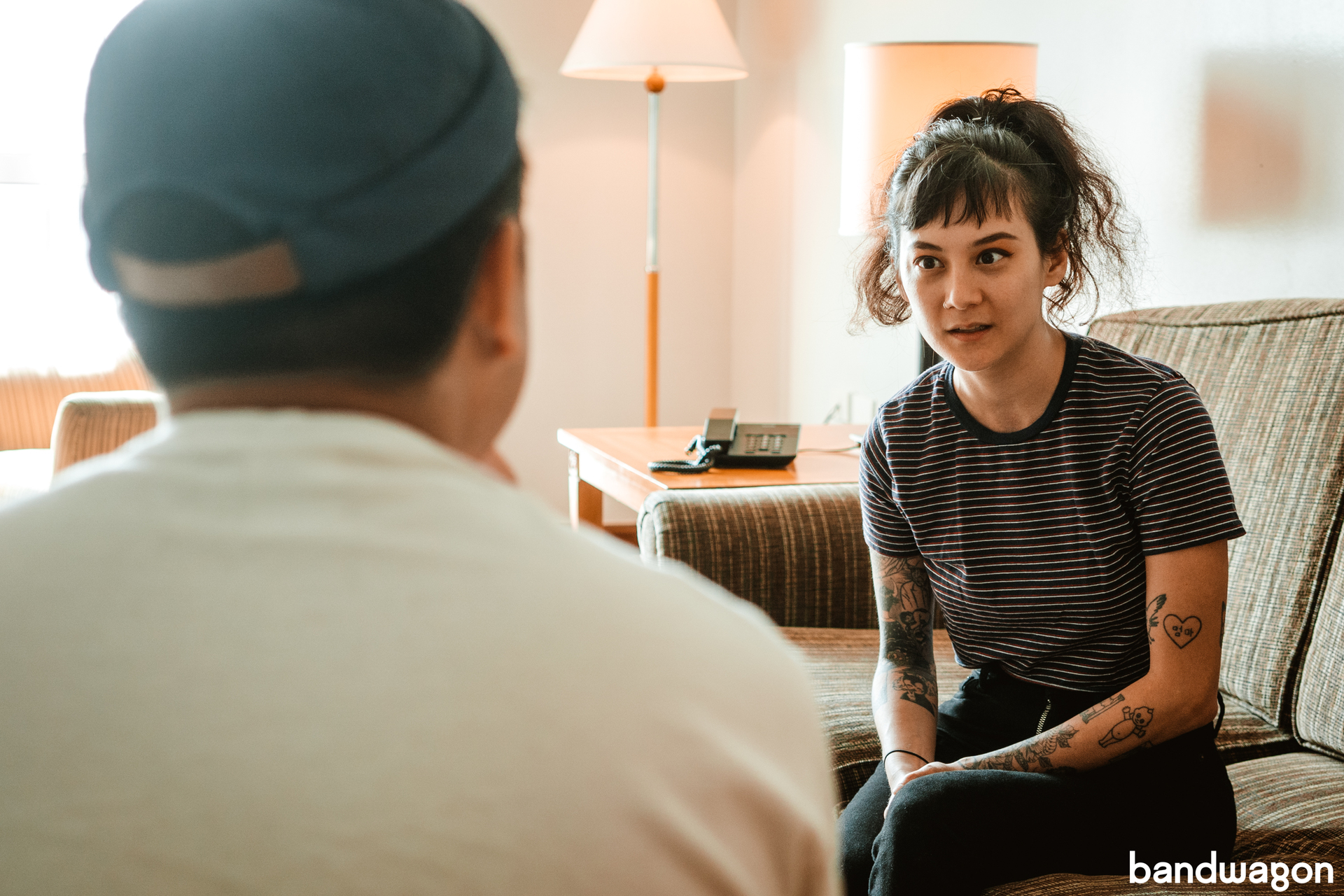 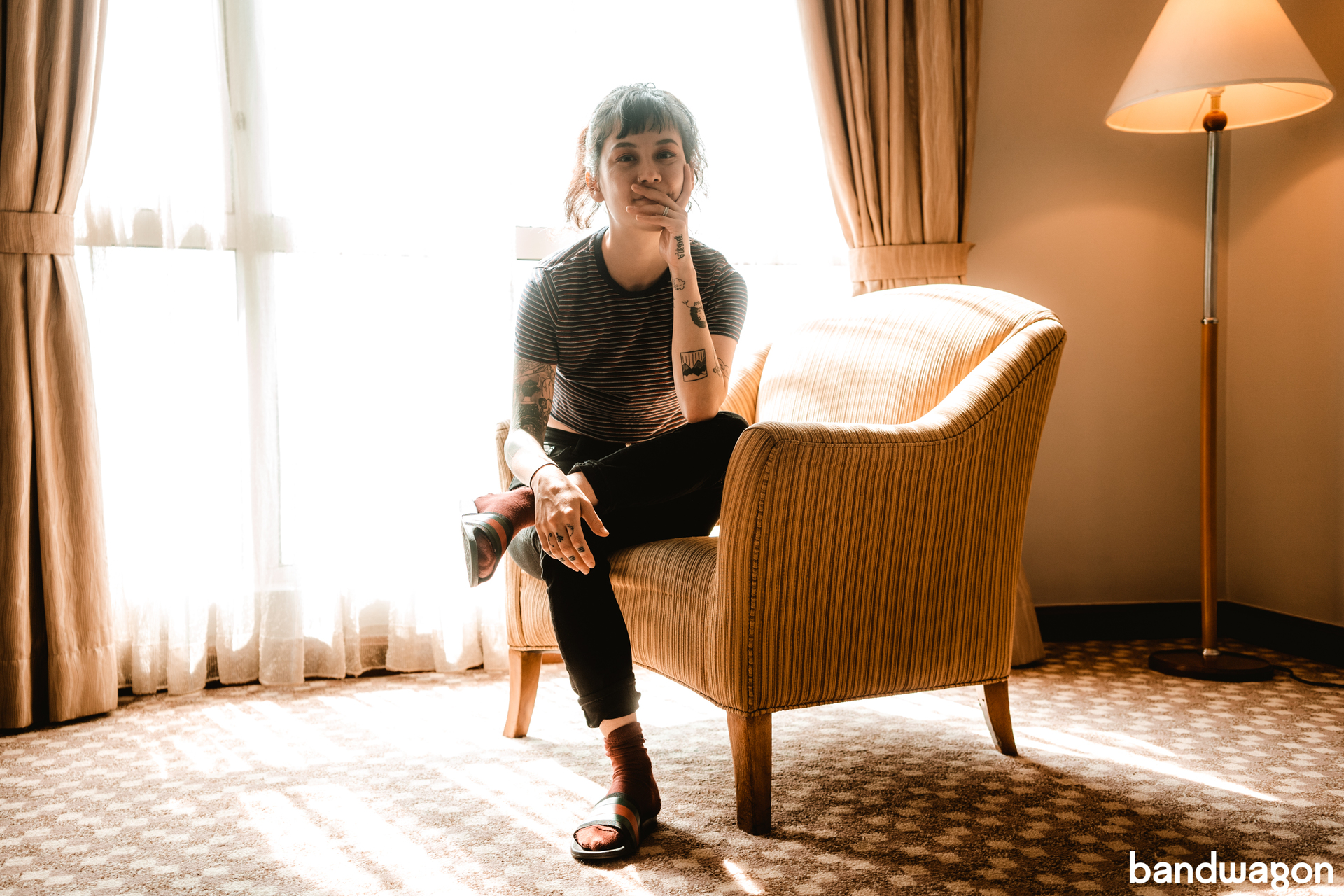 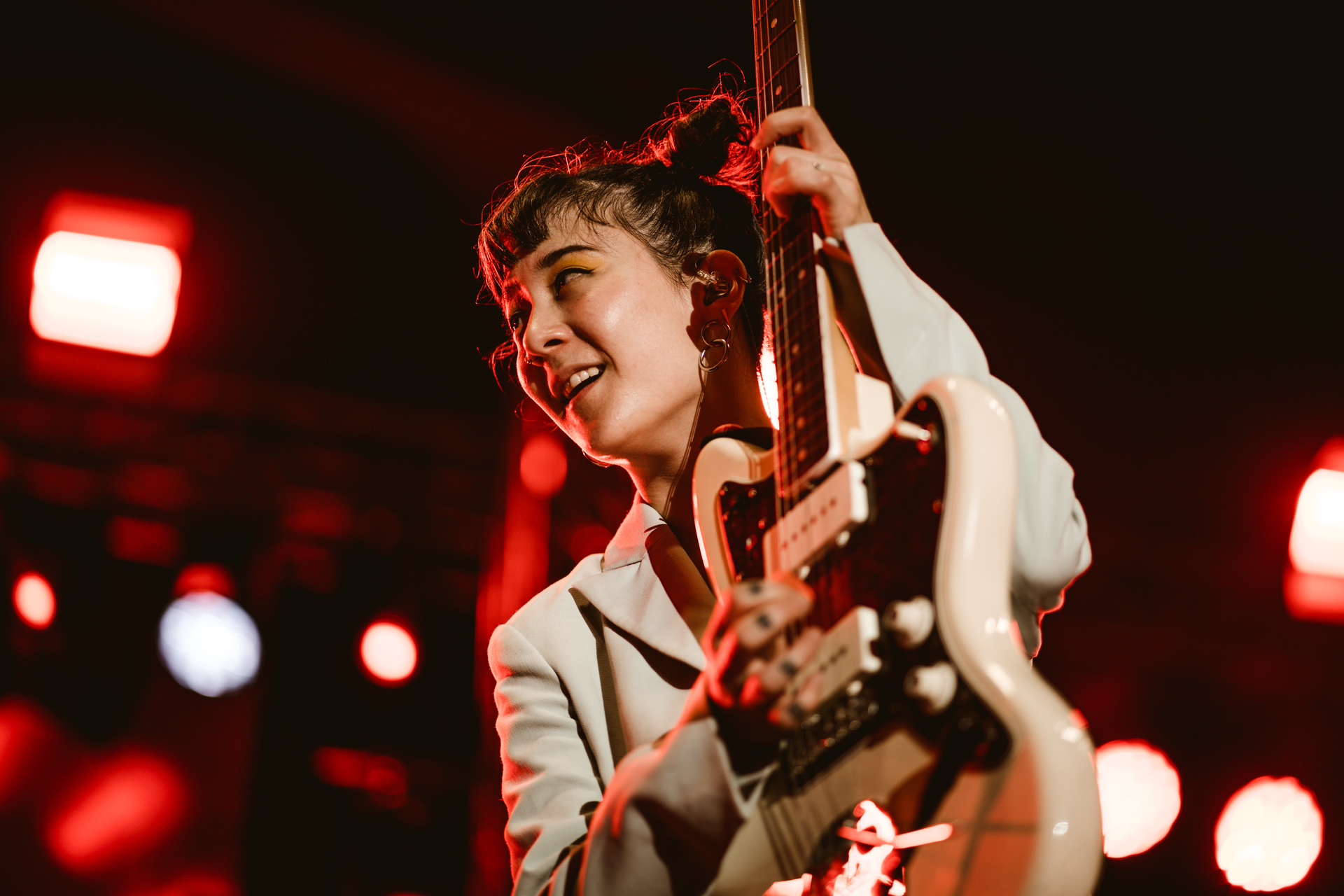 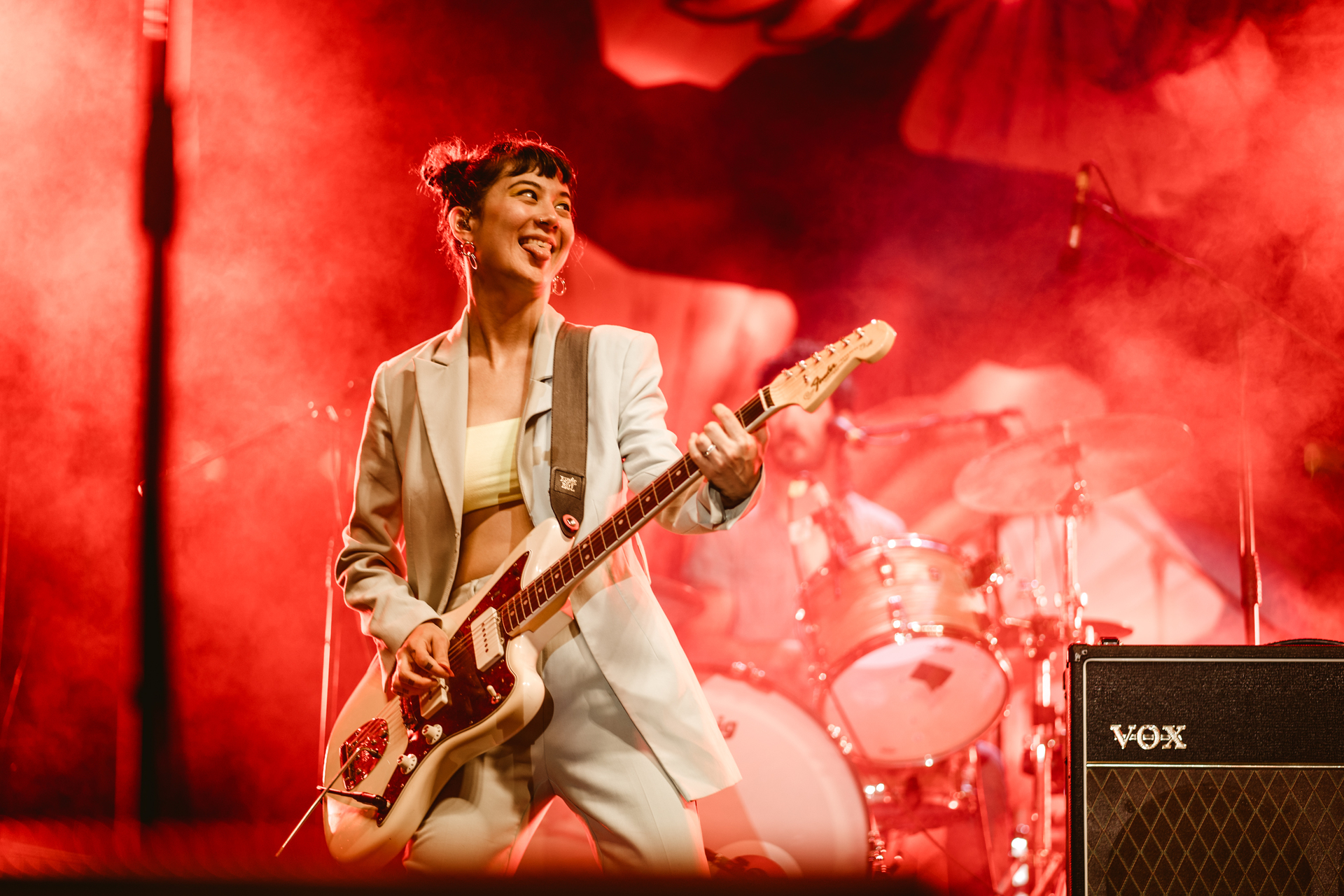 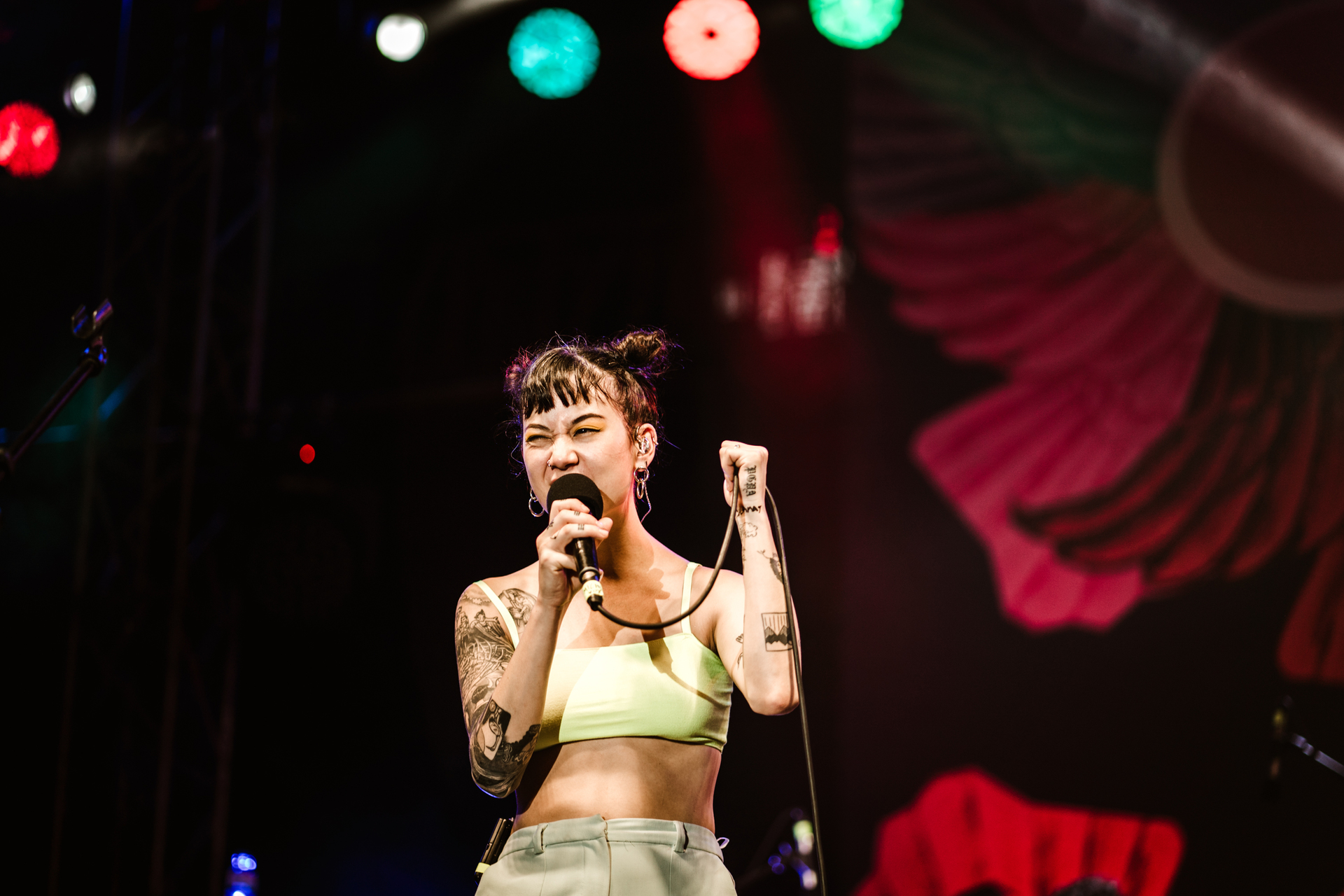 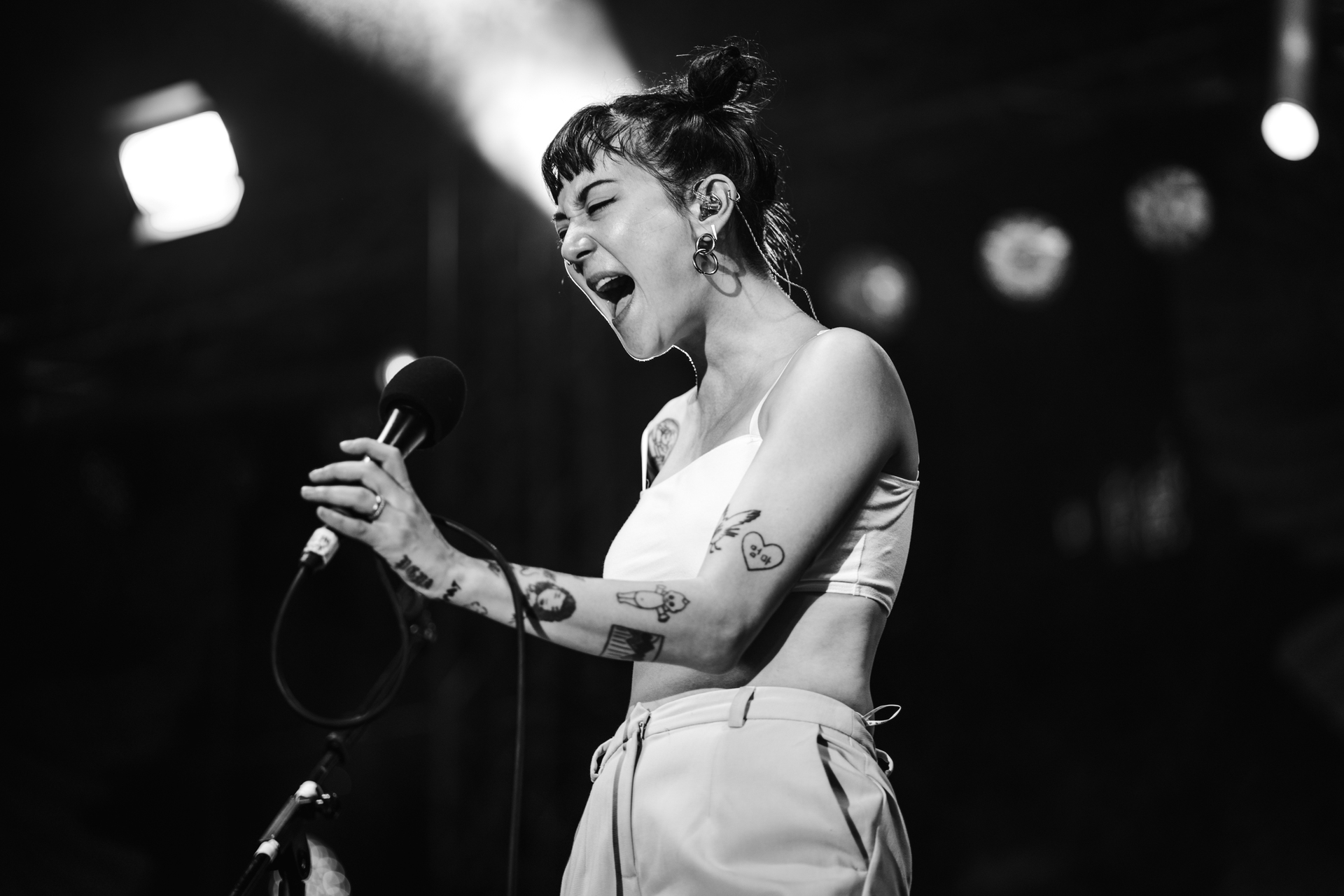 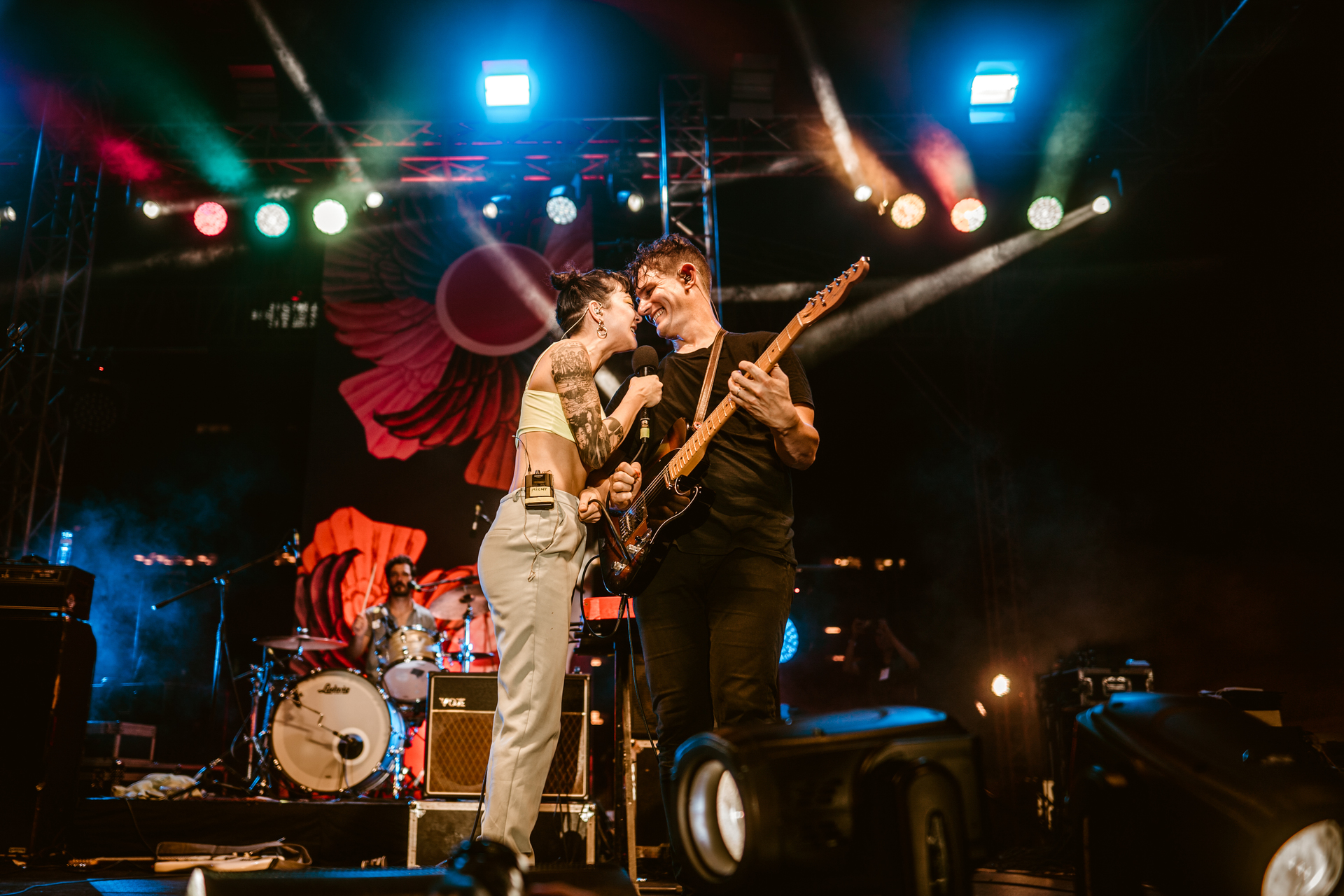 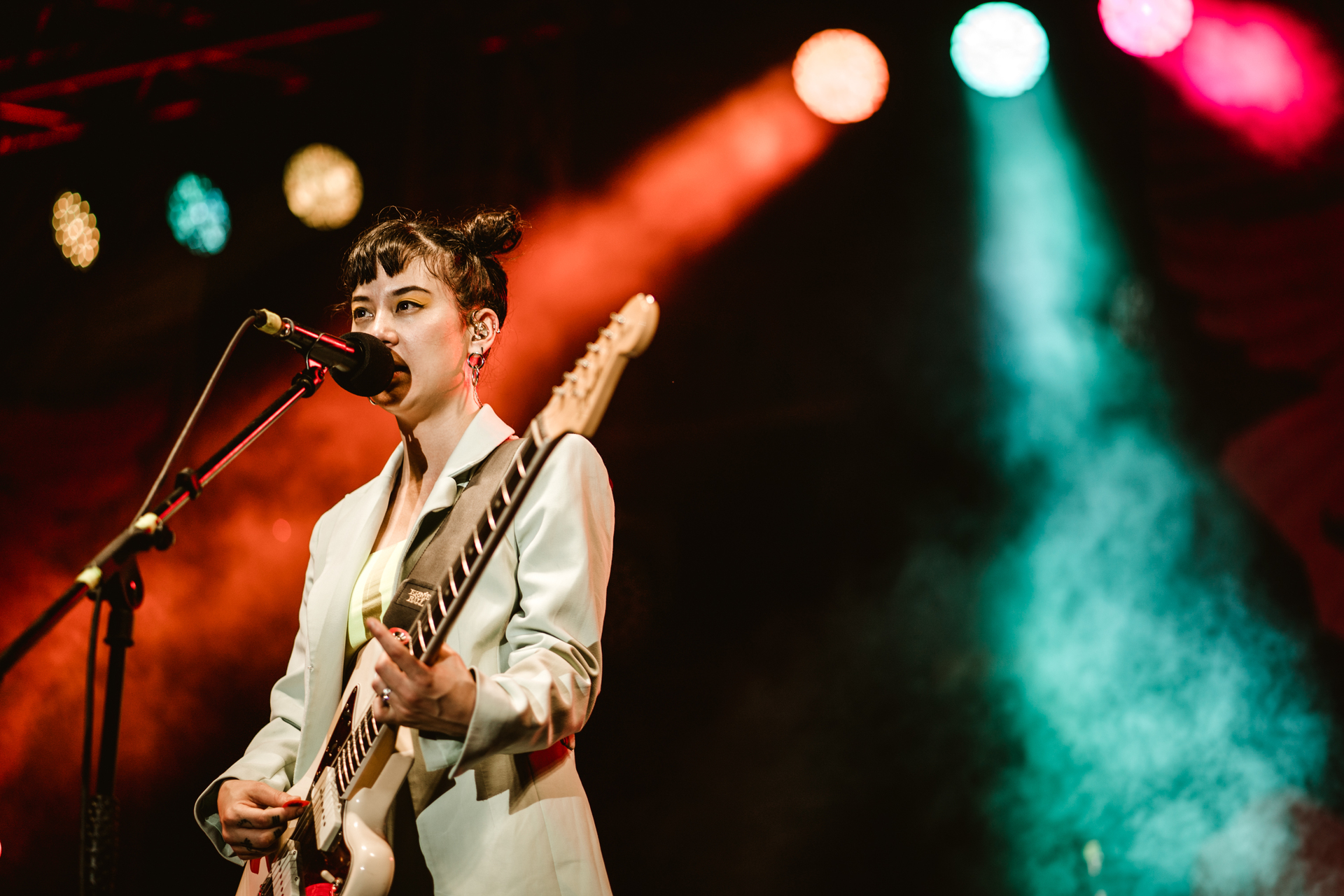 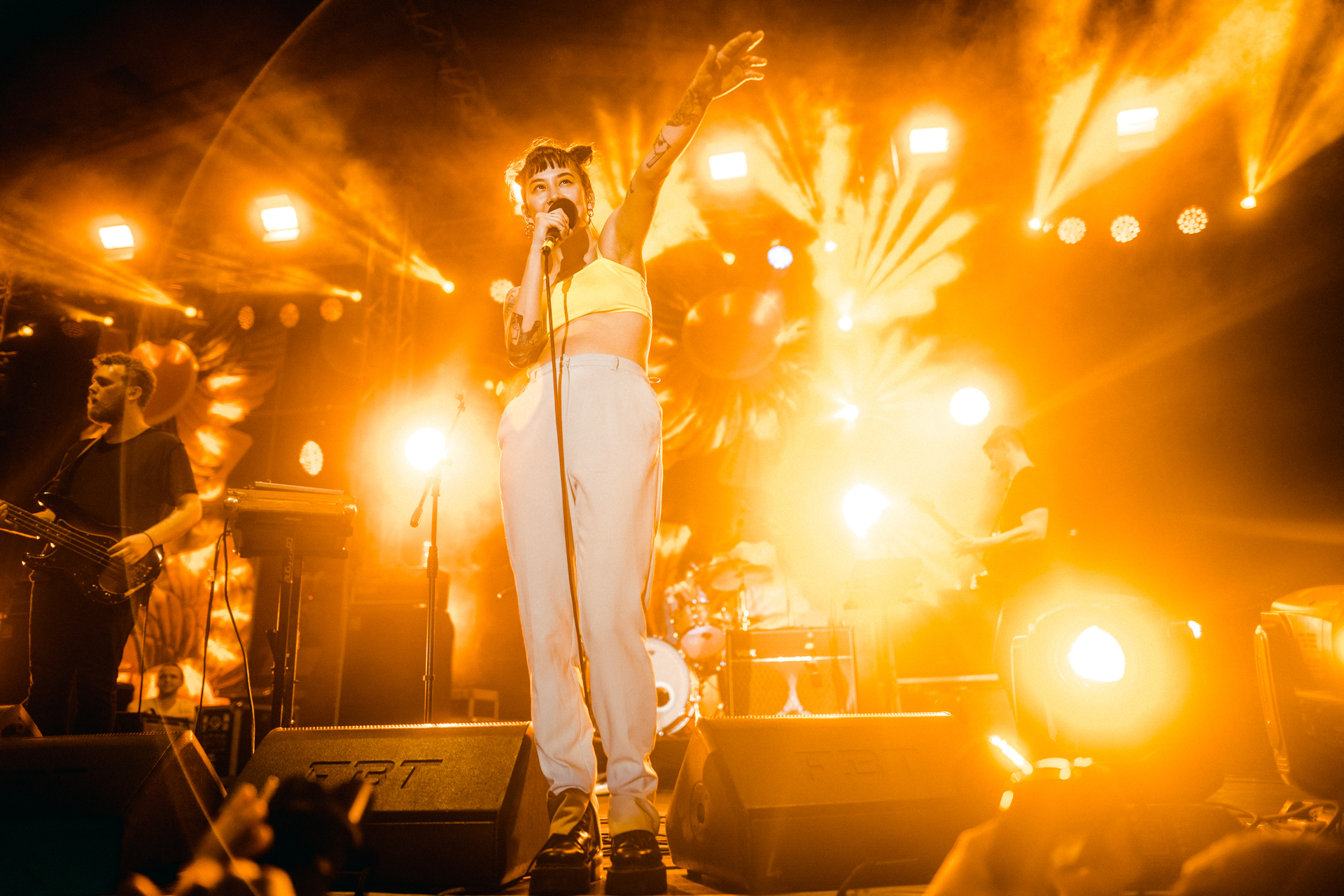 Special thanks to The Rest Is Noise