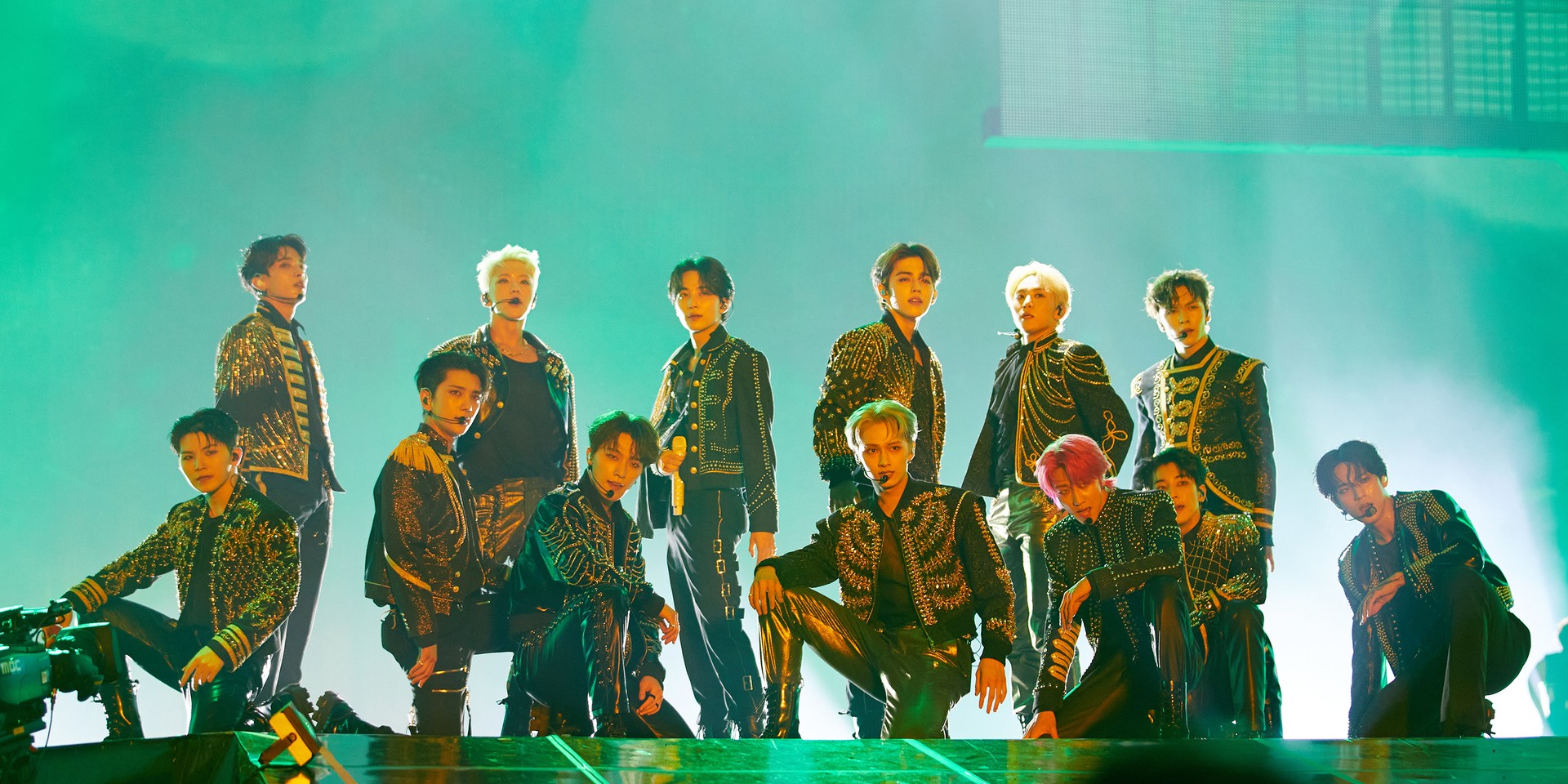 There’s no doubt that SEVENTEEN are meant for the live stage. With an intensity that lasts all night and multi-faceted talents that remain unmatched, it’s clear that the ‘HOT’ hitmakers were made to perform and their two-night concert at Seoul’s Gocheok Sky Dome was a testament to just that.

Over the weekend, SEVENTEEN kicked off their BE THE SUN world tour at Seoul’s iconic venue, a milestone for some of South Korea’s biggest music acts and which served as the group’s playground for their long-awaited return to the live stage. Coupled with an online livestream powered by Kiswe, the 13-membered act delivered a mesmerising spectacle of powerful performances, hilarious skits, glittering outfits, and a never-ending encore across four hours—yes, four hours!—each night.

If there's anything you need to know about SEVENTEEN it's that they know how to open a show. Emerging from literal flames, the members set the stage ablaze as they opened with a stunning performance of ‘HOT’. Backed by a live band and interspersed with interludes, the group brought out pure energy and adrenaline right from the beginning, setting an insanely high precedent for what’s to come. But if there's anyone that can maintain (and even, surpass) that level of power, it's SEVENTEEN. The concert's opening set continued on with 'March', 'HIT', 'Rock with you', and 'BOOM BOOM', all of which had jaw-dropping moments of their own. Much like the 'Don Quixote' act's previous concerts, the middle of the show consisted of unit performances.

Starting the segment was Joshua and Vernon's ode to early 2000s pop-punk '2 MINUS 1', followed by the Performance Unit which comprised Hoshi, Jun, The8, and Dino, the Vocal Unit which had Woozi, Jeonghan, Joshua, DK, and Seungkwan, and finally, the Hip-Hop Unit which saw S.Coups, Wonwoo, Mingyu, and Vernon. Each unit brought their own flavour to the stage, from the elegance and precision of the Performance Unit to the sonic beauty and heartwarming sing-alongs of the Vocal Unit to the unrivalled energy and encompassing stage presence of the Hip-Hop Unit. It's clear that the members were in their element and it's been a while since we saw them like this. While SEVENTEEN has held multiple online concerts and fanmeets over the past two years, this was their first headlining concert with a live audience that was allowed to scream and cheer (for the first half of the year, South Korea implemented a 'no cheering' rule during concerts in compliance with COVID-19 health and safety regulations). The excitement and rush of it all were evident in every aspect of their concert, it was no question that this was where they belonged; on a giant stage surrounded by a sea of their shining CARATs (SEVENTEEN fans). The entire group reunited on stage for a fun and hilarious set of their best party anthems: 'Mansae', 'Left & Right', and the ultimate hype song 'VERY NICE' (which will come to haunt us later), which were sprinkled with skits that had the crowd in a fit of laughter. You could always count on SEVENTEEN to interject their lovable personalities into their performances every chance they get. As we approach the last leg of the show, SEVENTEEN materialised on stage donning sequined and glittering outfits. This was the grand finale of the show (at least, before the encore stage) and their power and energy never faltered, still carrying on that high from when they opened the concert, which was almost two hours ago at this point.

The group performed 'Shadow', 'Ready To Love', and '24H' before closing out the set with the ground-shaking performance of 'Crush'. It was finally time for the concert to end (or what we presumed to be the end). Circling the stadium in carts, the members performed 'Darl+ing' and 'Heaven's Cloud', dedicating the sentimental tracks to the fans they've so eagerly waited to perform in front of. While the concert was nothing short of laughter, energy, and power, this was an emotional time for SEVENTEEN and their fans. For the first time in over two years, they were back together. During their closing remarks, the members gave heartwarming and teary-eyed speeches to thank CARAT (both online and in person) for waiting for them, and also each other for working so hard to keep the group together.

"When the pandemic started, I didn't know it would take this long. I'm happy to perform like this. I will work hard so that I can be proud when I go anywhere and see CARAT. I want to go higher, I really want to become the best. Let's become the best together. You have already made us the best," said Hoshi. "It is thanks to CARAT that I was able to hold a concert for two days. Thank you. Today's moment will be the best moment of my life. I wanted to show a bright and cool side in front of everyone today and give out good energy. That is why we exist," said The8.

"We really have become a family. There has never been a time when we didn't really think about each and every member of the team. There will come a time when we get used to today's appearance, but I hope that the members will continue to drag each other and go. I love all the members so much," said Seungkwan, who shed a few tears. Not wanting to close out their long-awaited concert with tears, SEVENTEEN brought back the party, bidding farewell with performances of 'Our Dawn Is Hotter Than Day', 'Snap Shoot', and a never-ending encore of "AJU NICE" (the chorus of their track 'VERY NICE').

It was literally never-ending, the group went on for over 30 minutes making sure everyone in the crowd was jumping and screaming along. Even when you thought it was over and the members disappeared behind the screen, they reappeared for another round. At that point, we all lost count of how many times we've sang this chorus and it now forever lives in our heads. It's no secret that SEVENTEEN's true power lies on the live stage. From their undying energy and precise choreography to their chaotic spiels and innate stage presence, each of them were made to be performers. This current era of their music career represents the group's collective ambitions to be the best of the best and with a show like BE THE SUN, there's no doubt that they're almost there.

SEVENTEEN will continue their BE THE SUN world tour later this July with stops across North America, before making their way back to Asia with concerts in Bangkok, Jakarta, Manila, Singapore, and Japan.

SEVENTEEN 'BE THE SUN' in Seoul Setlist: