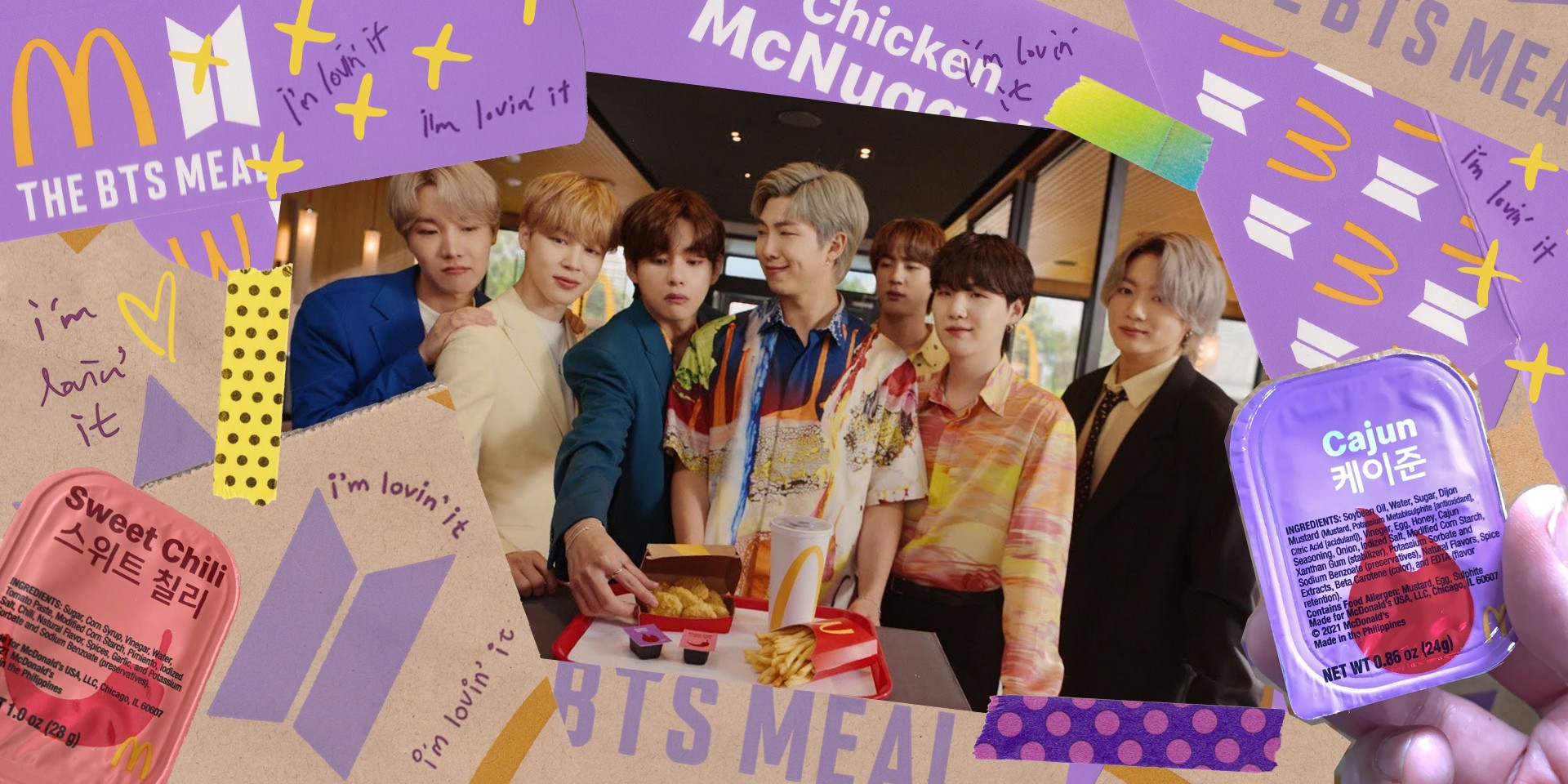 In the middle of a pandemic, the experience of scoring the BTS Meal is the closest thing fans will get to that adventure of lining up for concert tickets.

You know how it goes—getting up early, heading out to your ticketing branch of choice, and queuing up with fellow fans in hopes of coming home with a very much coveted seat near the stage. Except in this situation, we're inside a McDonald's trying to get a box of nuggets, a Coke, and fries (and maybe an additional McFlurry for the full experience).

McFlurry one, please! 😍 Enjoy the spicy and sweet duo of The BTS Meal + McFlurry with Oreo! 🍦 Get it for ONLY ₱275 on the McDonald’s App. 📲 Download now and #ClaimIt via Drive-Thru and Take Out! #BTSMealPH pic.twitter.com/W57IVBUlRj

Since the BTS Meal's rollout in late May, McDonald's stores across the globe have had different experiences in how fans snagged their orders. These situations landed on extreme ends of the stick—from laid back fans ordering like it's any other day to reaching apocalyptic levels where hundreds of riders crowd stores for hours.

Because of this, the higher-ups at McDonald's Philippines planned ahead by offering pre-orders for the BTS Meal, which sold a day before its official rollout in the country. They'd even gone as far as coordinating with barangay tanods and LGUs to help manage lines outside each branch.

There are 7 reasons to try The BTS Meal! Get it starting 7AM today! Comes with 10-pc Chicken McNuggets, medium fries, a Coke, and 2 NEW sauces: Sweet Chili and Cajun, picked by BTS. Order via Dine-In, Take Out, Drive-Thru, McDelivery and our delivery partners. #BTSMeal #BTSMealPH pic.twitter.com/WO3nuHVtF0

To put it simply, it's the meal's accessibility. Let's face it, not everyone can afford official merch, so this tie-up between the 'Butter' act and McDonald's has become one of the best marketing strategies between the two.

To make sure these paper bags, carboard boxes, and cups last (and not wind up in the trash), fans have gotten creative. They've gotten around to framing them, turning sauce covers into keychains, wrapping the cups as tumbler designs, and even repurposing them as wallets.

from this: to this: pic.twitter.com/Uuaa5UX6yy

I feel so extra today. So I made my bts meal packaging more special. Instead of throwing it away, I recycled them and made some stuff out of it. 🥰💜 #BTSXMcDonalds #BTSMealPH @McDo_PH 💜 pic.twitter.com/3oshNNxIAN

Of course, you don't have to be a die-hard fan to enjoy the BTS Meal. Just the Cajun and Sweet Chili sauces and the idea of chomping down a box of 10 chicken nuggets are enough to entice non-fans to dive in, too.

Here's what friends and fans have to say about the overall BTS Meal experience in the Philippines: 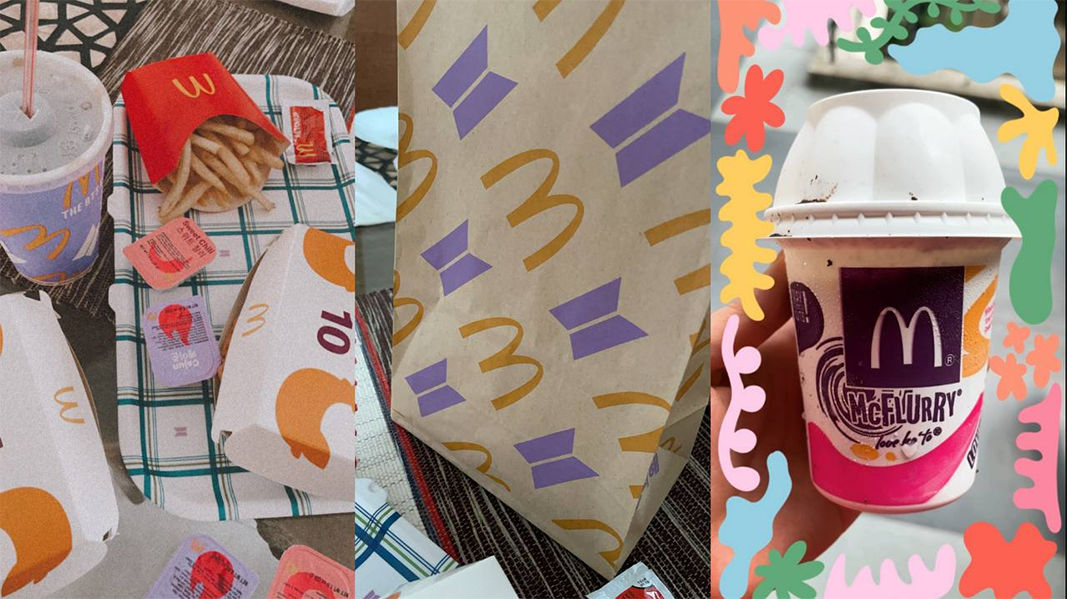 Went around 12-ish so prime time for lunch, had maybe 6-7 cars ahead in line. There was a marshall who took orders before you went into the actual drive-thru to help make the process faster. Got the BTS Meal to share with my dog (Chewie loves mcdo fries!) and to get through a really rough time (thanks, BTS!!!). Sad I’m the only one I knew who got the normal nuggets box. I also added an oreo McFlurry for the complete experience. 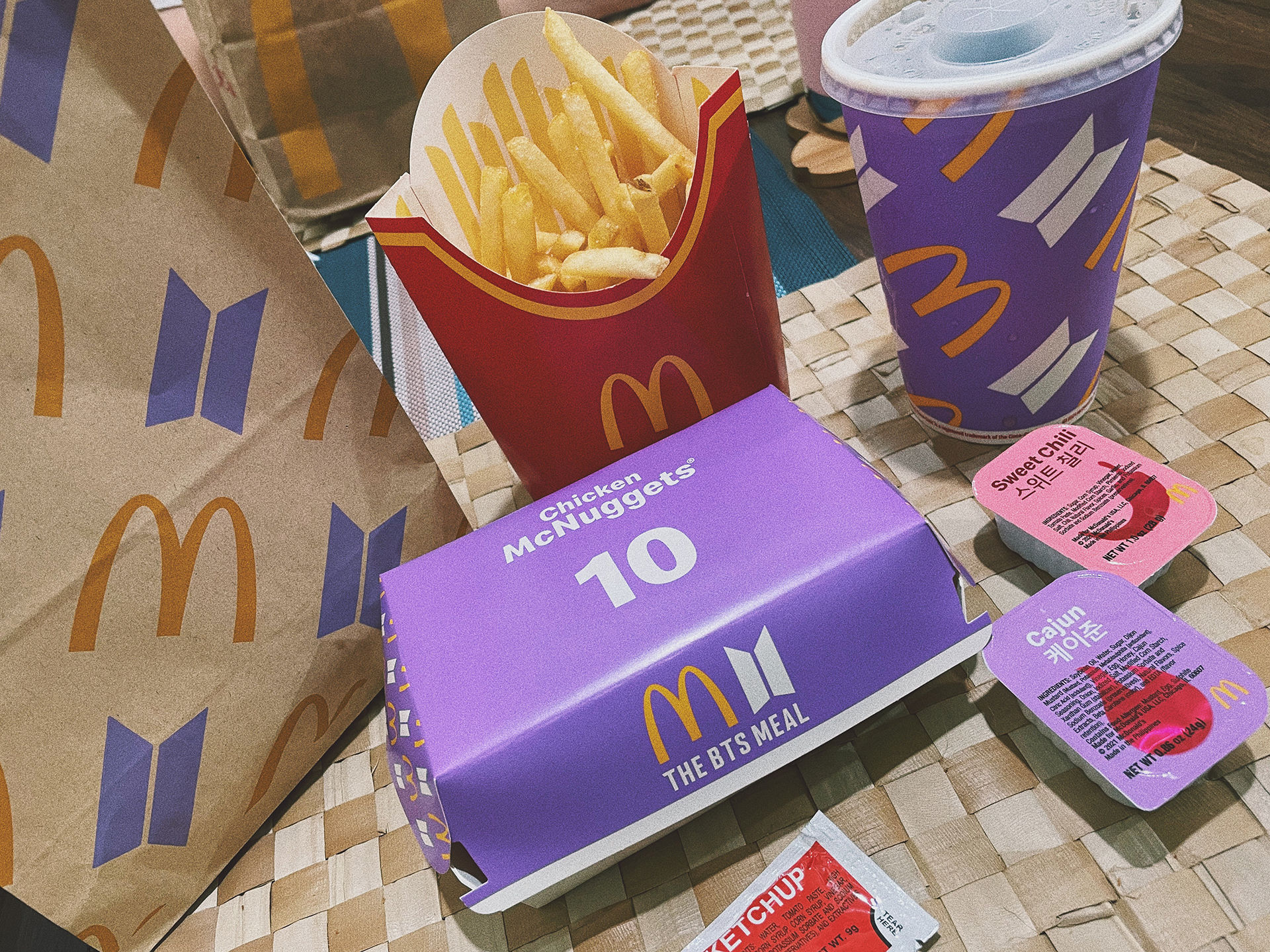 It was 3 p.m. and there was only one other car ahead of us at the drive-thru. We just had to park along the side after ordering and wait a bit, probably because those glorious nuggets were still in the cooker. A member of the staff walked to us with the BTS Meal and carefully handed over the goods. The fries were placed in a separate paper bag, so it wouldn't damage the BTS bag with oil and moisture. 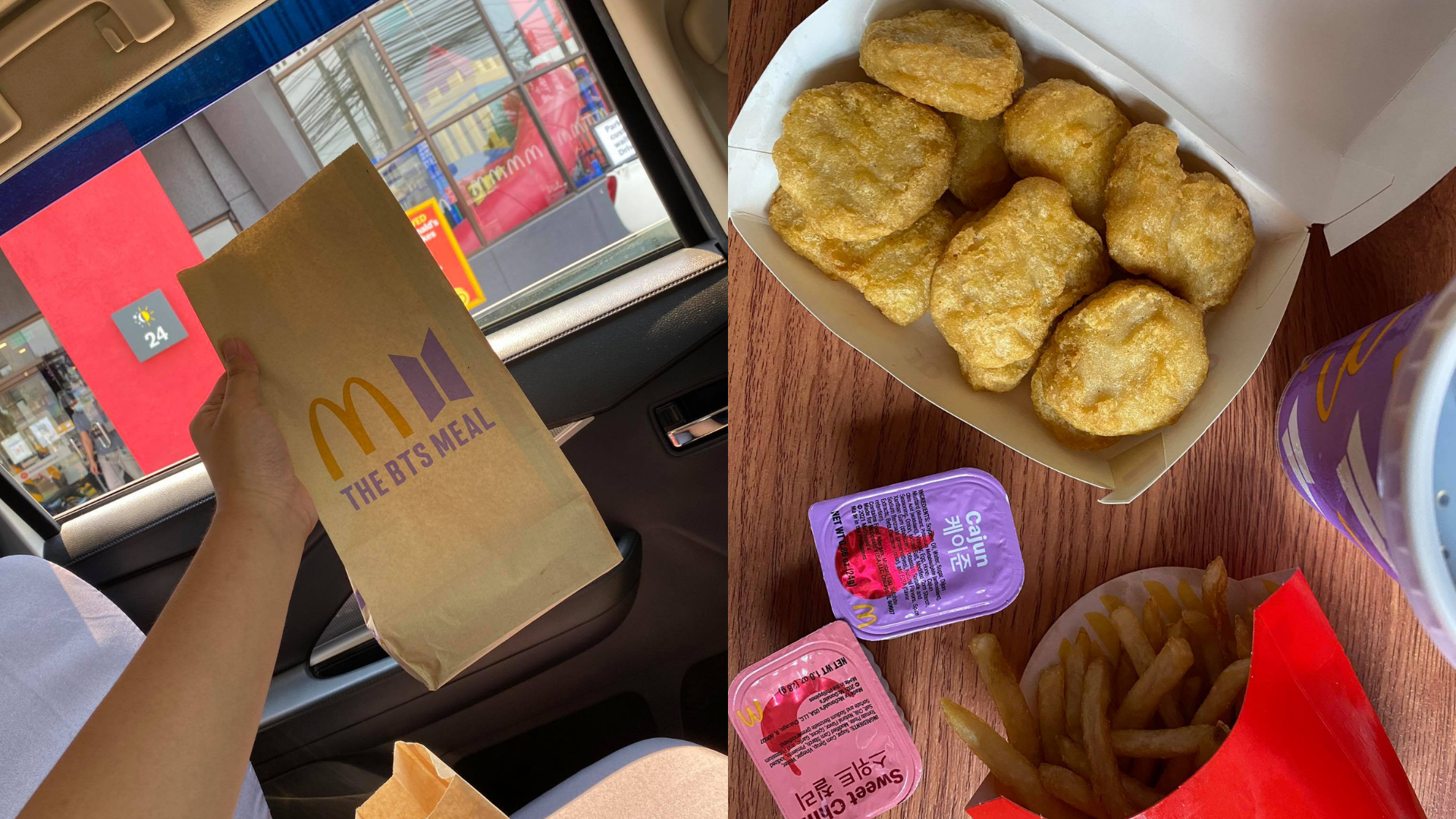 It was 1 p.m., so just after peak lunch hour, we were the only car at the drive-thru so it took less than 5 minutes. They had the BTS meal up and ready immediately, the only waiting we did was for a separate order of a coffee float (which took like two minutes haha). It was a great meal, and I'd probably get another one because the Cajun sauce was really good (like really good). 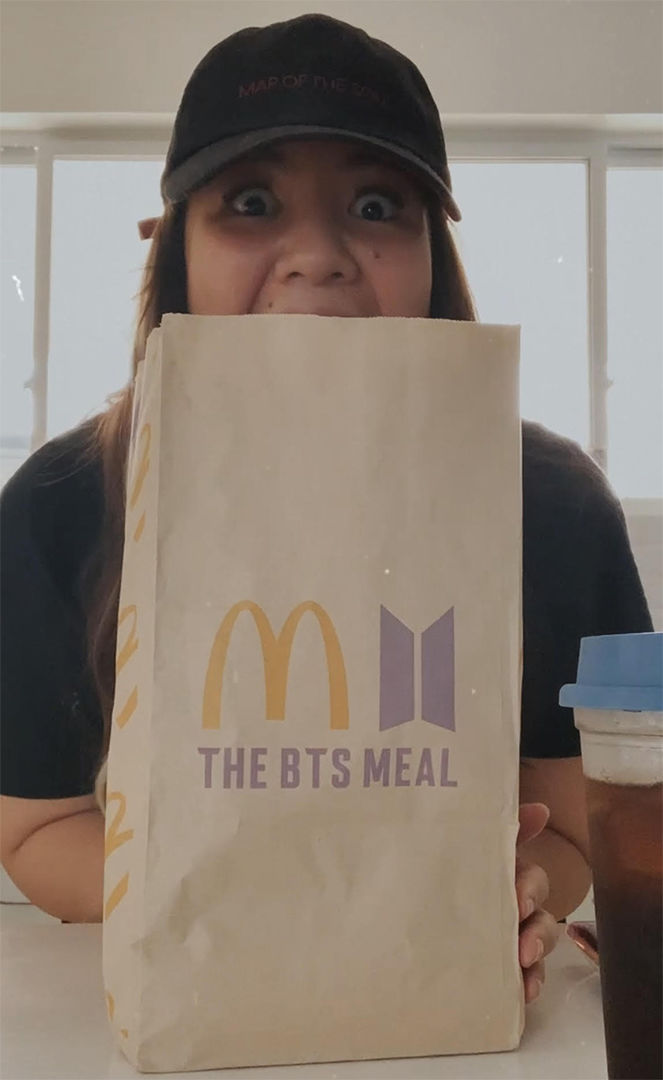 Waiting Time: No one in line!

Surprisingly NO LINE in store considering this is a big branch. (Drive-thru had a LONG LINE though.) I walked in store with my MOTS cap and they knew immediately hahaha 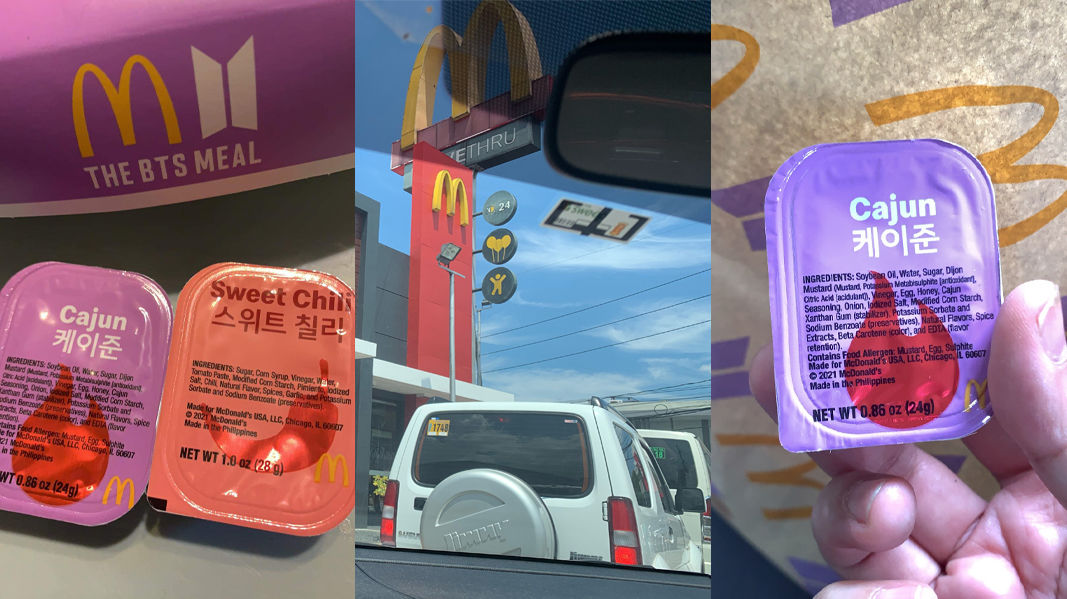 I was expecting to spend more time in line so I had a longer playlist. It was pretty quick though. But this is for the advanced meal. Tomorrow could be crazier.

My GC was just full of laughter and good vibes all morning when we all started heading out to get our meals. Cajun's everyone's favorite, might be because we're so used to sweet chili sauce (hello, fishballs). I wanted to get an Oreo McFlurry too because Taehyung but I wasn't sure if I could fit it all in. 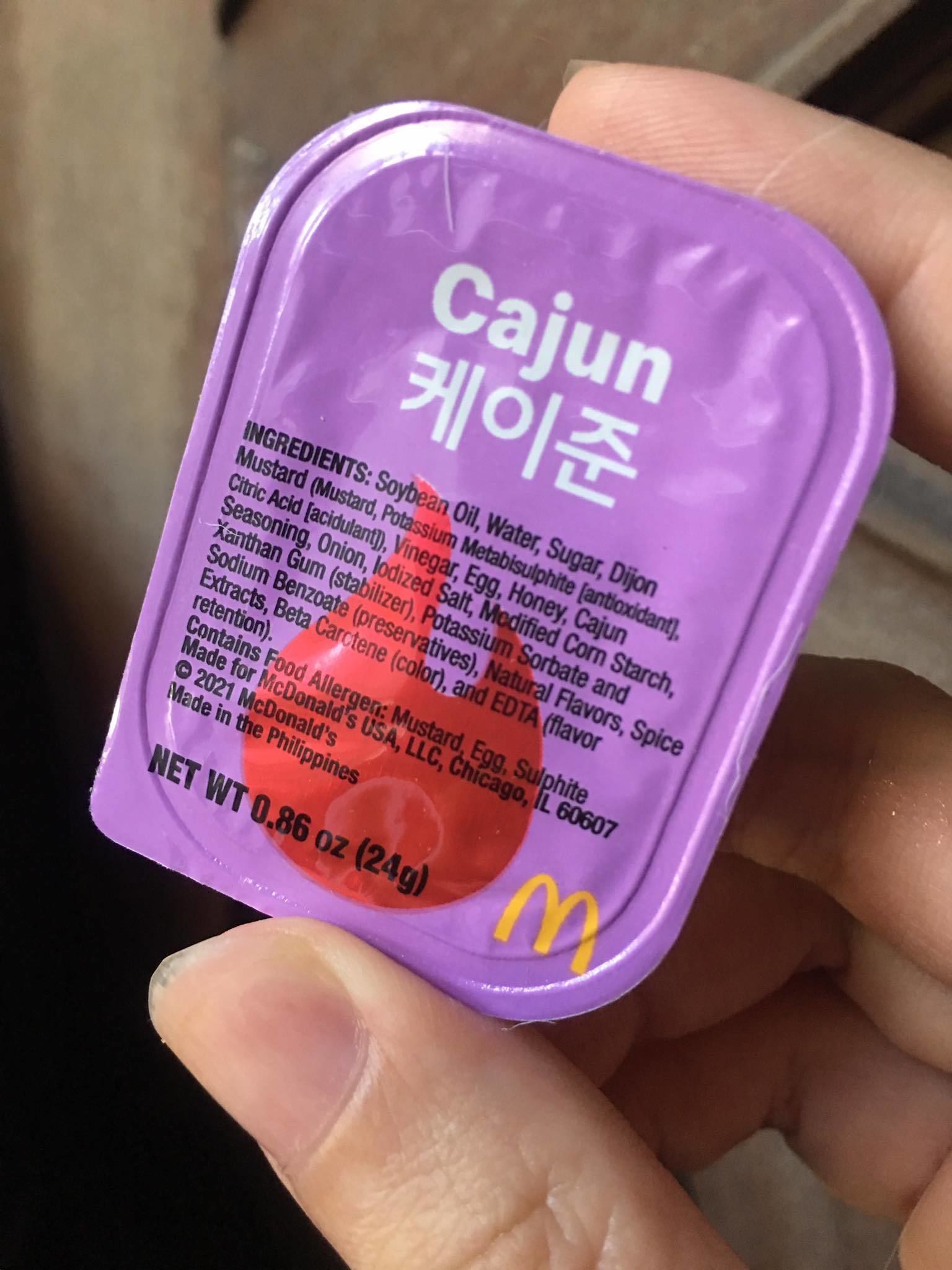 I ordered it at 7 a.m.! Tried the Sweet Chili sauce first, it was spicy but still good. The Cajun on the other hand was way better! (Also tried them both at the same time and felt weird). 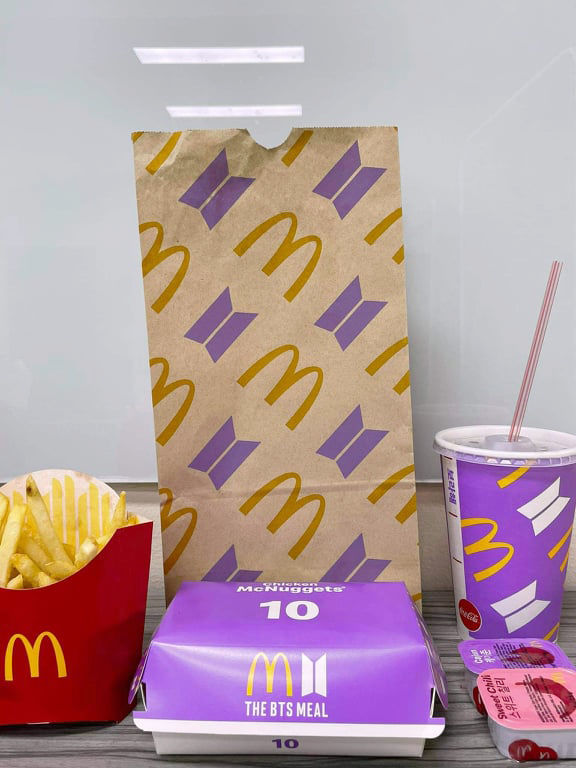 It was smooth like butter. The money I paid for it? Yeah, I owe it all to my mother. Haha charot. Sobrang worth it! 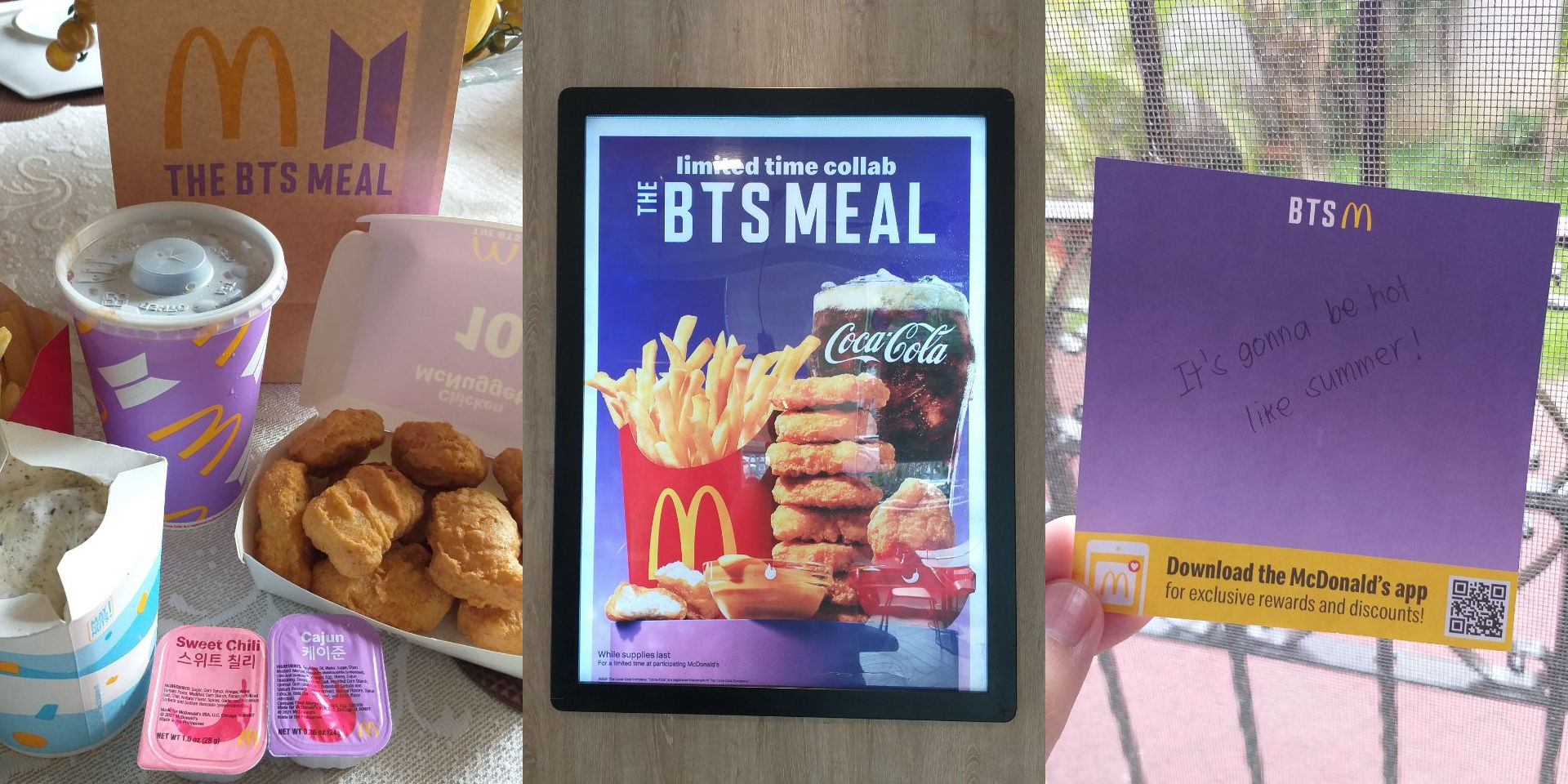 Sauce Bias: Both! I like the kick and sweetness of Sweet Chili but also the familiarity of the Cajun

Waiting Time: No line (Just me, my sister, and a few Grab riders)

It was generally a good experience, I thought I'd have to go through the app or online to order, but I'm glad they accepted walk-in and drive-thru. They seemed well stocked too as the cashier said I could order up to 5 (not that I did). The branch I went to was also well decorated with posters of the promo and ceiling decor and balloons. 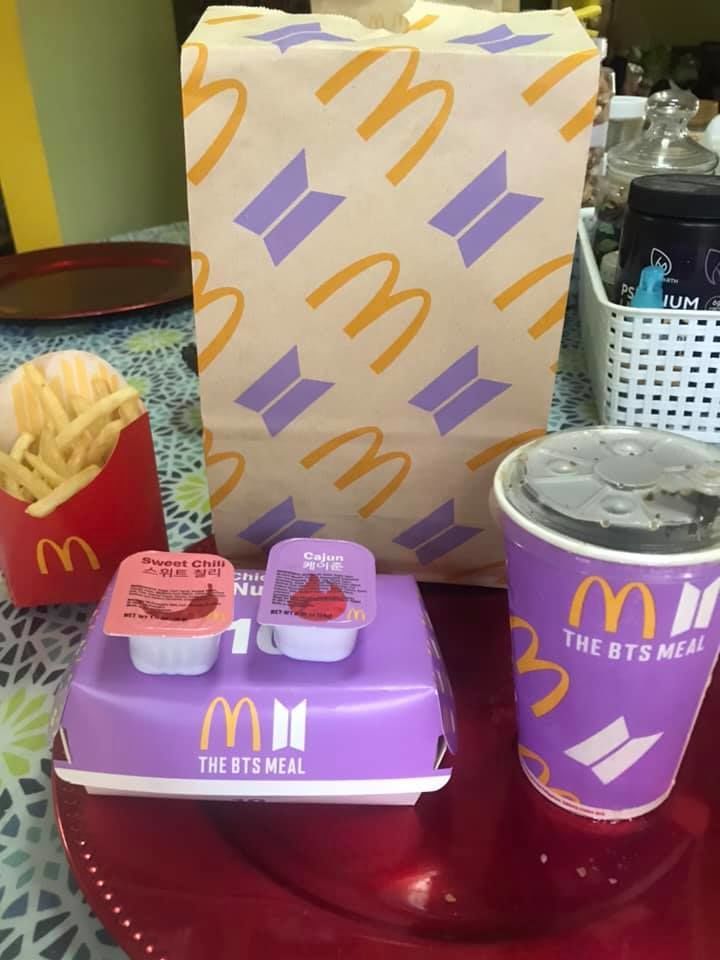 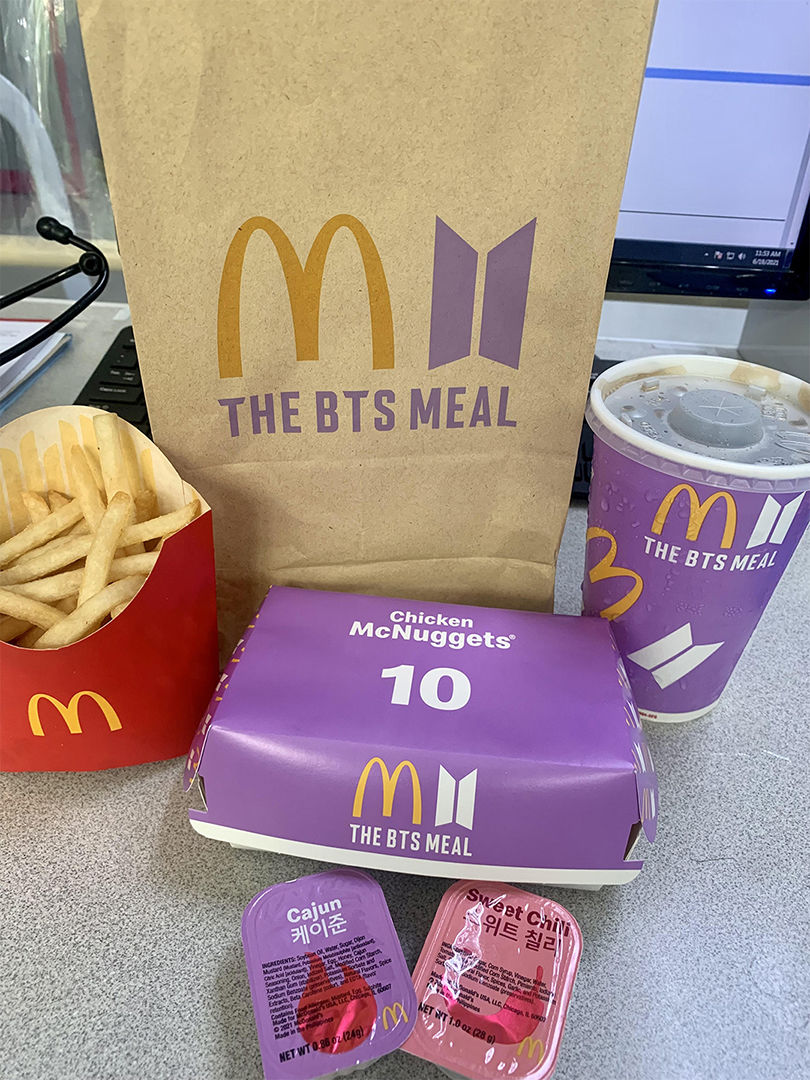 I was there at 10 a.m. I like how the Sweet Chili has a kick and bite that makes me want to eat more! Good thing this meal has 10 pcs of nuggets! The cajun is for my fries. 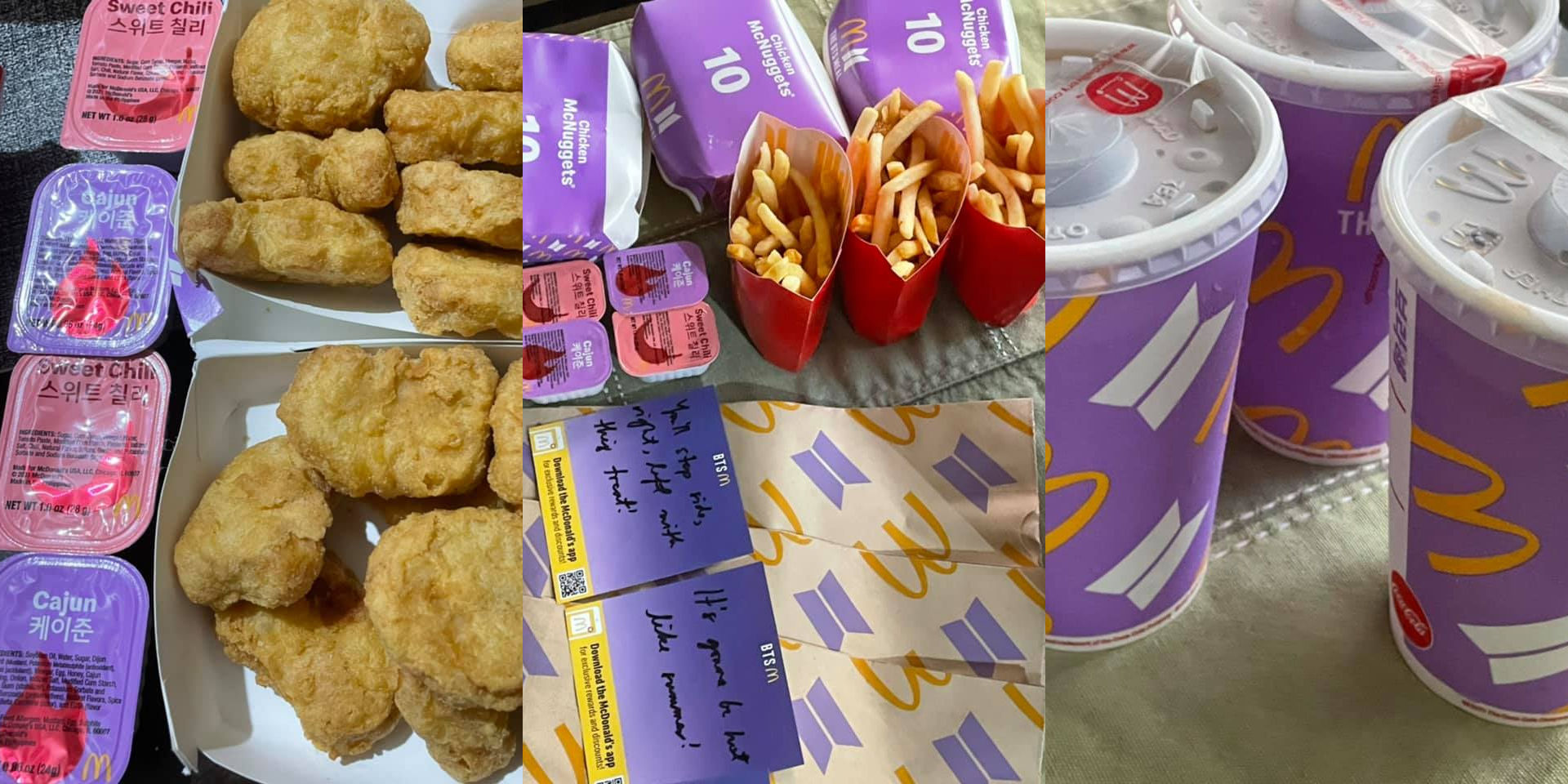 My sister ordered the BTS meal for our family and it came with cute handwritten notes from the McDonald’s crew. We are keeping these along with the BTS meal packaging. Also sharing a tip we got from a co-ARMY to try mixing both sauces—it tastes really good! 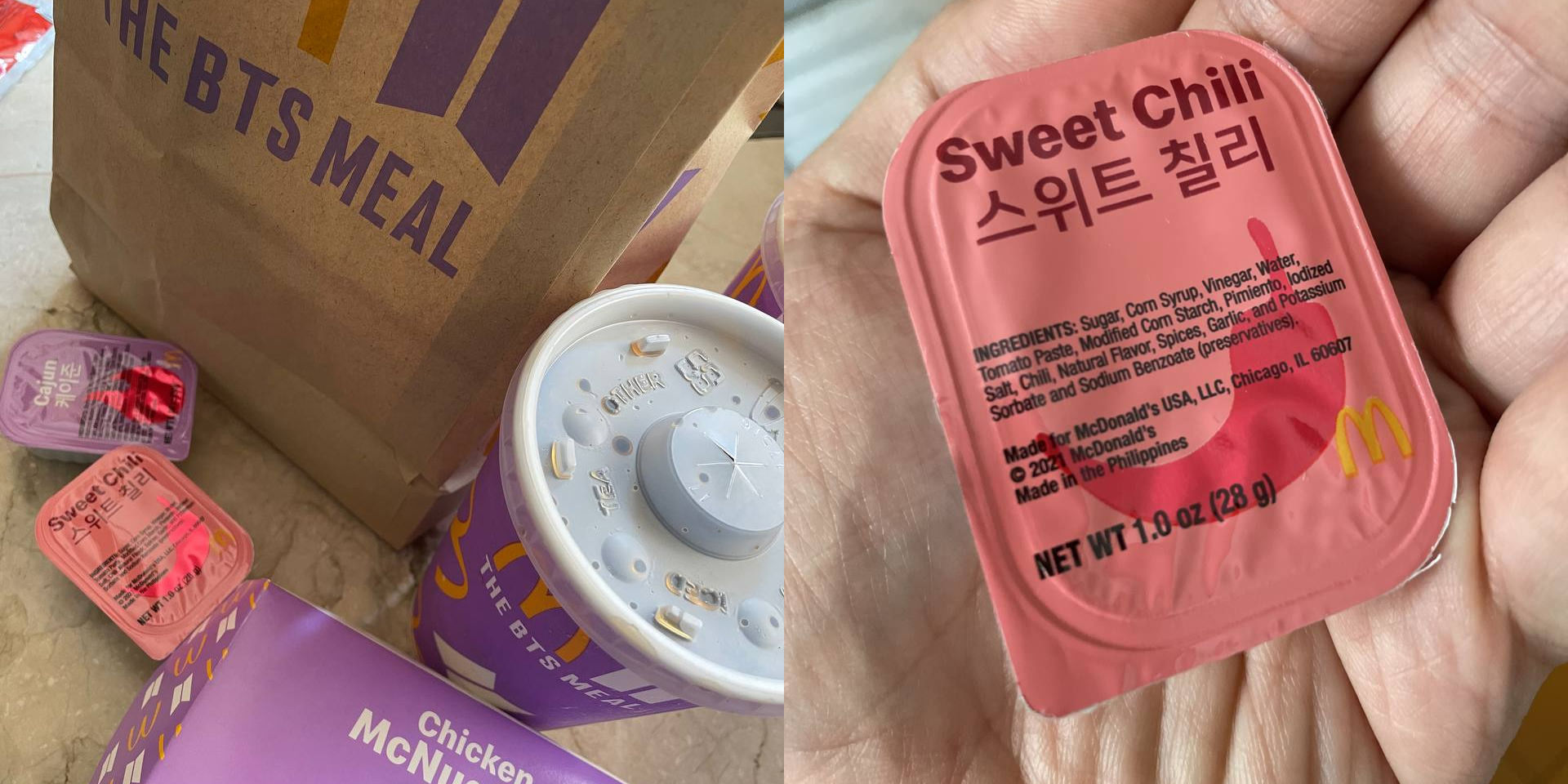 As an apologist for unconventional sauces for nuggets, the sauces were legitimately tasty. If only they had these beyond the BTS activation. 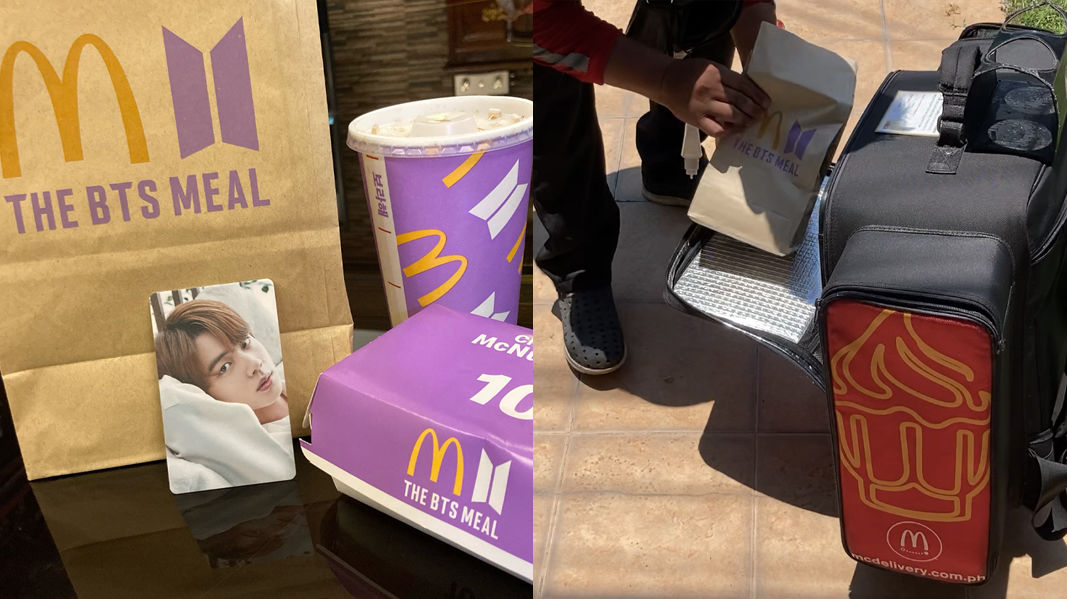 Getting the BTS meal felt reminiscent of a kid getting a happy meal minus the toy. But the special packaging with the BTS logo looks great and we already know many army are gonna preserve these for display HAHAHA INTENSSSEEE. And for most fans, I believe the idea alone that BTS collaborated on this with their ARMY in mind is enough, it recharges their sense of belongingness. And for some reason, I felt obligated to play their music while receiving the delivery and while eating the meal. If I didn’t have work to focus on, I think I might’ve even dressed up for the heck of it. Hahaha!