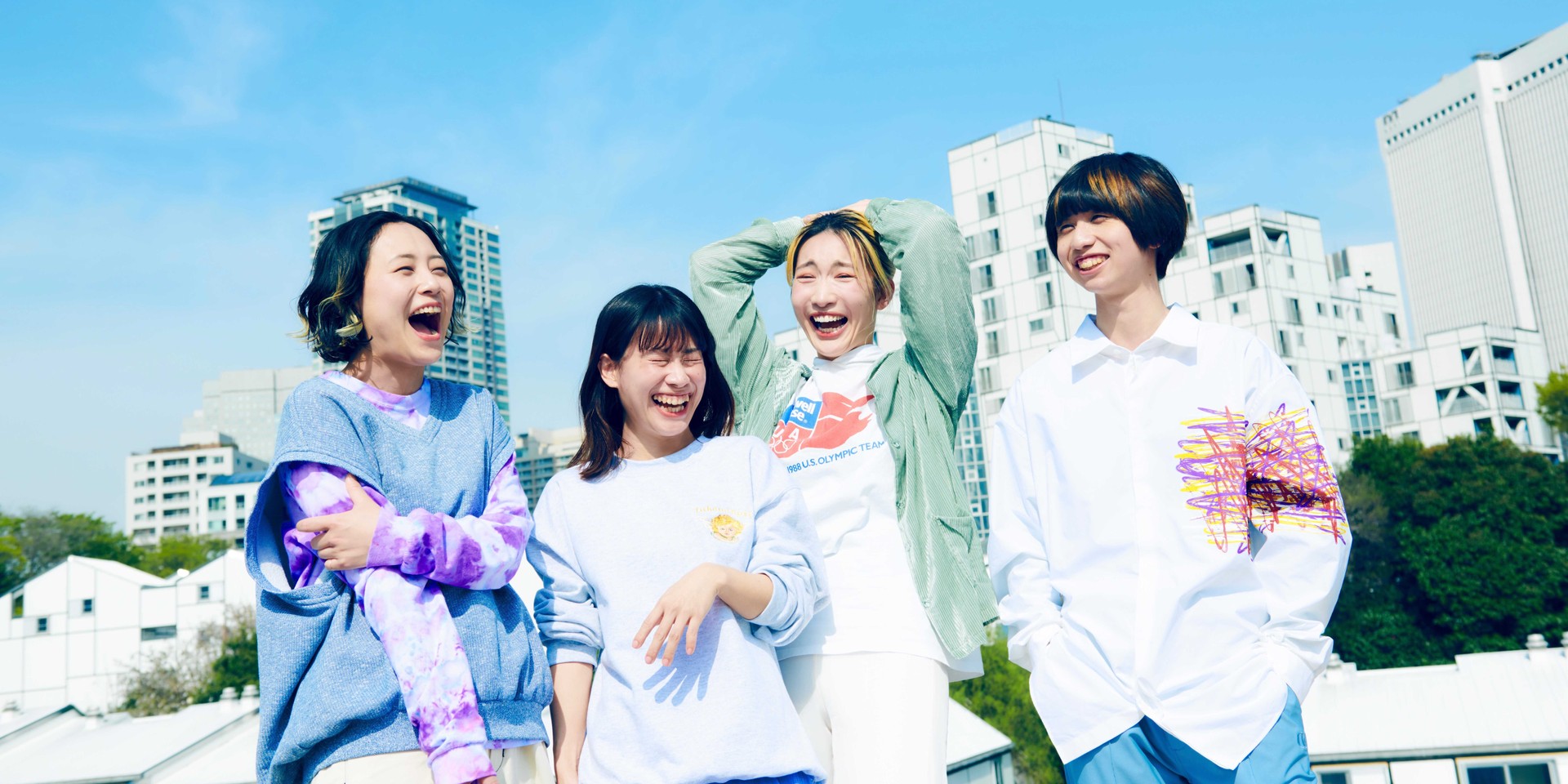 Like many other niche subgenres, ‘math rock’ is a tricky, amorphous term. Is it just another style of emo or hardcore? Or is it an offshoot of post-rock or prog rock? What even counts as math rock?

For all the pedantic debate that borders on music elitism, it’s refreshing that tricot—who are often grouped with other Asian acts in the genre—are making an explicit disclaimer: the members are not familiar with math rock.

“I’m very inspired by Ringo Sheena, Morning Musume, and System of a Down. I really like how their music has a striking quality to it,” Ikkyu tells Bandwagon. Yusuke chimes in with his love for Ringo Sheena, adding: “I listened to her songs the most before I even started doing music, and I still use her arrangements as a reference point today.”

J-pop’s influence is undeniable in tricot’s music. One of their most well-known songs, the bubbly ‘Ochansensu-Su’ is an example of the band’s ability to masterfully blend pop with complex rhythms.

Similarly, 2020’s ‘WARP’ may sound closer to standard pop rock formulas. But the band never sacrifices their technical prowess on the track, even subverting listeners’ expectations with a seamless rap breakdown mid-song. Ultimately, unlike the calculated aesthetics of math rock, spontaneity underlies the Japanese quartet’s creative philosophy. According to the band, their sound isn’t exactly created on purpose—and that’s the magic of it.

Since their formation in 2010, the Kyoto-based outfit have built an illustrious career, with five studio albums under their belt and over 100 shows across the globe. Most recently, the band released ‘INAI’, the official theme song for Japanese drama series Curse of Spring. A dark tale about the madness of the human condition, the plot follows a female protagonist, who begins a romantic relationship with her dead sister’s fiancé. This is the second soundtrack offering from the band, who previously contributed ‘Tokyo Vampire Hotel’ for the Sion Sono horror miniseries of the same name in 2017.

tricot’s attempts to capture the themes of Curse of Spring come through on ‘INAI’. With snarling guitars and pummeling drums, the song depicts the emotional tumult of grief and guilt that haunt the show’s characters. Ikkyu’s dynamic vocals oscillate between ominous desolation and controlled aggression, propelling the song forward with a frantic urgency.

“Because ‘INAI’ was written for Curse of Spring, the lyrics are about curses,” says Ikkyu. “It’s a powerful song that can blow away any curse—a good way to ward off evil,” she explains.

“This song has a heavier sound than usual, so it felt fresh and was really fun to record,” shares Yusuke about the recording experience. “Usually, we don’t use click tracks during recording, but ‘INAI’ was by far the most difficult song to sing without a click track,” adds Ikkyu.

Like many of their previous songs, the verses on ‘INAI’ were penned by Ikkyu, who is also the band’s main lyricist. While there has been much praise for tricot’s compositions, the richness of their lyrics deserves just as much appreciation. Almost bordering on the metaphysical, Ikkyu’s writing often incorporates surreal imagery and a stream-of-consciousness style. As in songs like ‘Itazura’ and ‘Niwa’, her lyrics also typically feature liberal use of wordplay and onomatopoeia.

“Most of the time, the lyrics are just words that seem to be drawn out from the sounds within the song. I try to search for what [these sounds] are trying to say and expand on them,” shares the frontwoman. While the literary qualities of tricot’s songs make it difficult to accurately translate their songs, they no doubt add an intriguing dimension to the music.

‘INAI’ follows the non-album single ‘BAKURO’, which was recently released this May. Last year, tricot also celebrated their 10th anniversary with the release of their fifth album, 10. Moving into their 11th year together, the band continues to embody the innovative spirit of their music. “I want to create songs that’s even poppier than before, but still mysterious in a sense,” shares Yusuke. “I want to create a feeling of surprise, of feeling caught off guard when people listen to our music.”

“It would make me happy to give everyone as many exciting moments as possible in their daily lives through music,” reflects Ikkyu. Though a simple sentiment, it thoroughly encapsulates tricot’s work at its core: to transform the mundane into something fresh and exciting.

Yet, it’s not just the music itself that’s boundary-pushing. tricot’s autonomous approach to production and management have also set them apart from many of their peers. The band founded its own label BAKURETSU Records in 2011, and their first three albums were all released independently. Although the quartet signed with major label Avex Entertainment in 2019, they continue to operate under their own independent imprint 8902 Records—which, coincidence or not, is a pun on ‘bakuretsu’.

“With our label contract, we’ve come in contact with more people and the range of our activities has also expanded,” says Motifour. “Signing to Avex also gave us more resources and guidance to improve the quality of our work, so I feel that it’s important to borrow strength from other people too.” She adds, “But most importantly, we still want to create the things that we want to create. In that sense, being an independent unit still matters.”

“I think freedom is obviously important, but I personally like to cooperate with a variety of people. I want to move forward by bouncing off new ideas with one another and sharing joy together,” says Ikkyu. “Working in this kind of structure [with Avex] is just how it turned out to be, and I think it’s important to have a system that’s closest to us in order to to work with all sorts of people.”

Aside from their unique approach to music, tricot have also been hailed as icons of female representation in Japanese rock. With increasing global attention, many have singled out the band as one of the best Japanese math rock acts, especially one that’s led by women. A quick Google search will show numerous articles that emphasise the band’s female-fronted nature, something of a rarity in the male-dominated underground music scene.

While it can be unhelpful and tokenising to lump tricot together with all other Japanese female bands into a monolith, bassist Hirohiro feels that this is still an overall net positive. “I’m not sure if representation is important, but I’m just happy that badass women in awesome bands from Japan are getting attention,” she remarks.

For Ikkyu, perhaps it’s an issue of greater accessibility in music discovery, and people are now listening to diverse artists that just so happens to include more women. “Personally, I don’t feel like there’s been a significant increase in attention. It’s just that more people can easily find us through the Internet now,” says the guitarist. “It also depends on how wide the range of interests the listener can accept when it comes to different genres and artists.”

In addition, just like many other musicians affected by the COVID-19 pandemic, tricot have had to navigate the many challenges that have emerged. Despite this, the quartet remains steadfastly positive and resilient. When asked to describe 2021 in one word, Hirohiro shares: “For me, it would be ‘birth’, because I’ve been giving birth to ideas about new songs and how to hold concerts during the pandemic.”

On the other hand, Motifour and Ikkyu resonated with the word “challenge”. “With regards to both tricot and my personal life, there’ve been a lot of new things to try. Some of it is due to COVID-19, but as an artist, I’d like to stay positive and continue trying new things,” shares Ikkyu. “This has been a year of challenges, searching, and trying new things that are possible despite this [COVID-19] situation,” reveals Motifour. 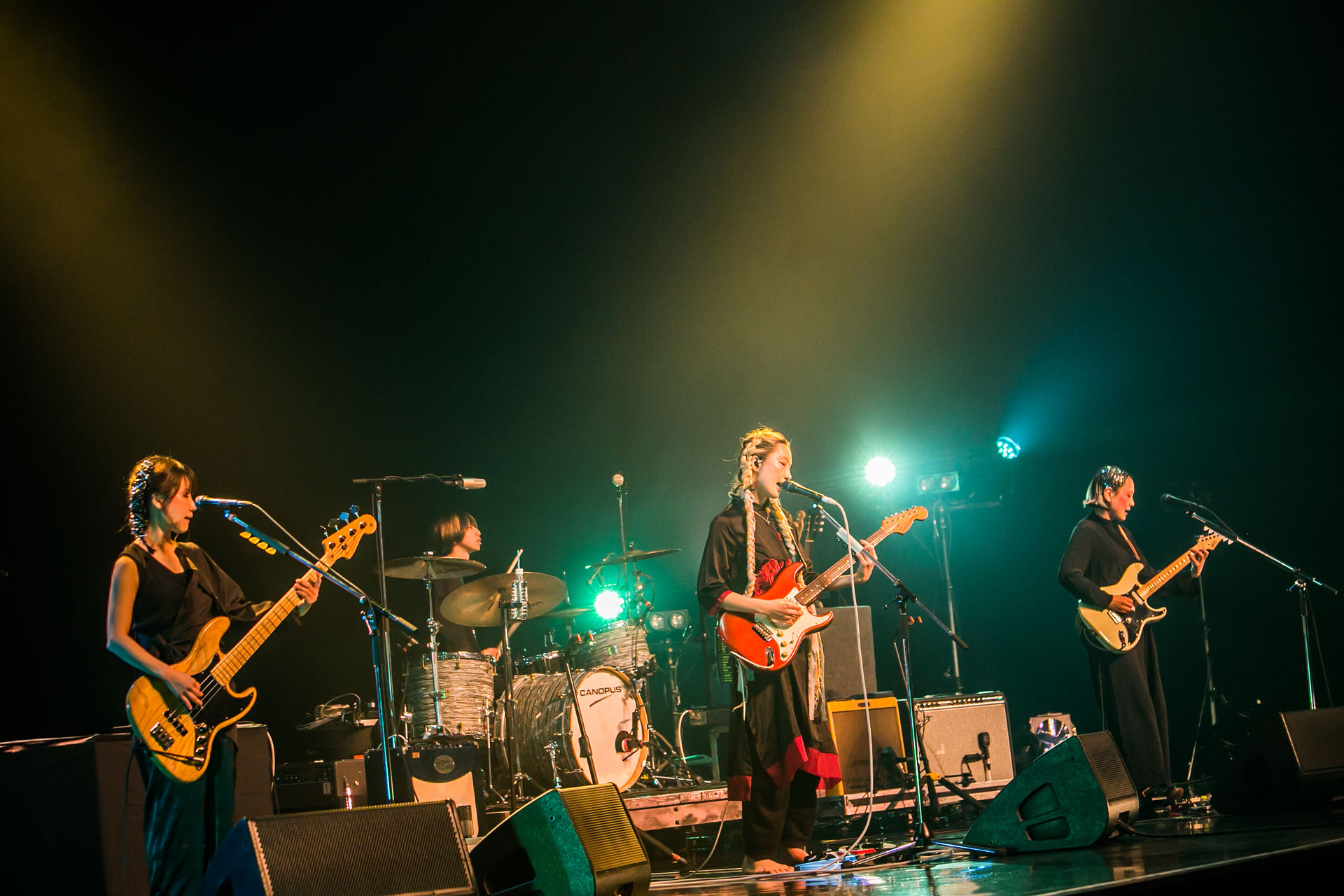 While tricot are slated to perform at this year’s Fuji Rock Festival, the four-piece are also brimming with excitement to tour overseas. The band had previously played in Southeast Asia, including stops in Singapore and the Philippines. “I’m looking forward to playing live for our fans in various countries. Please remember us and wait for us,” says Ikkyu. Hirohiro echoes the same sentiment: “I definitely would like to return. I’d love to see everyone again!”