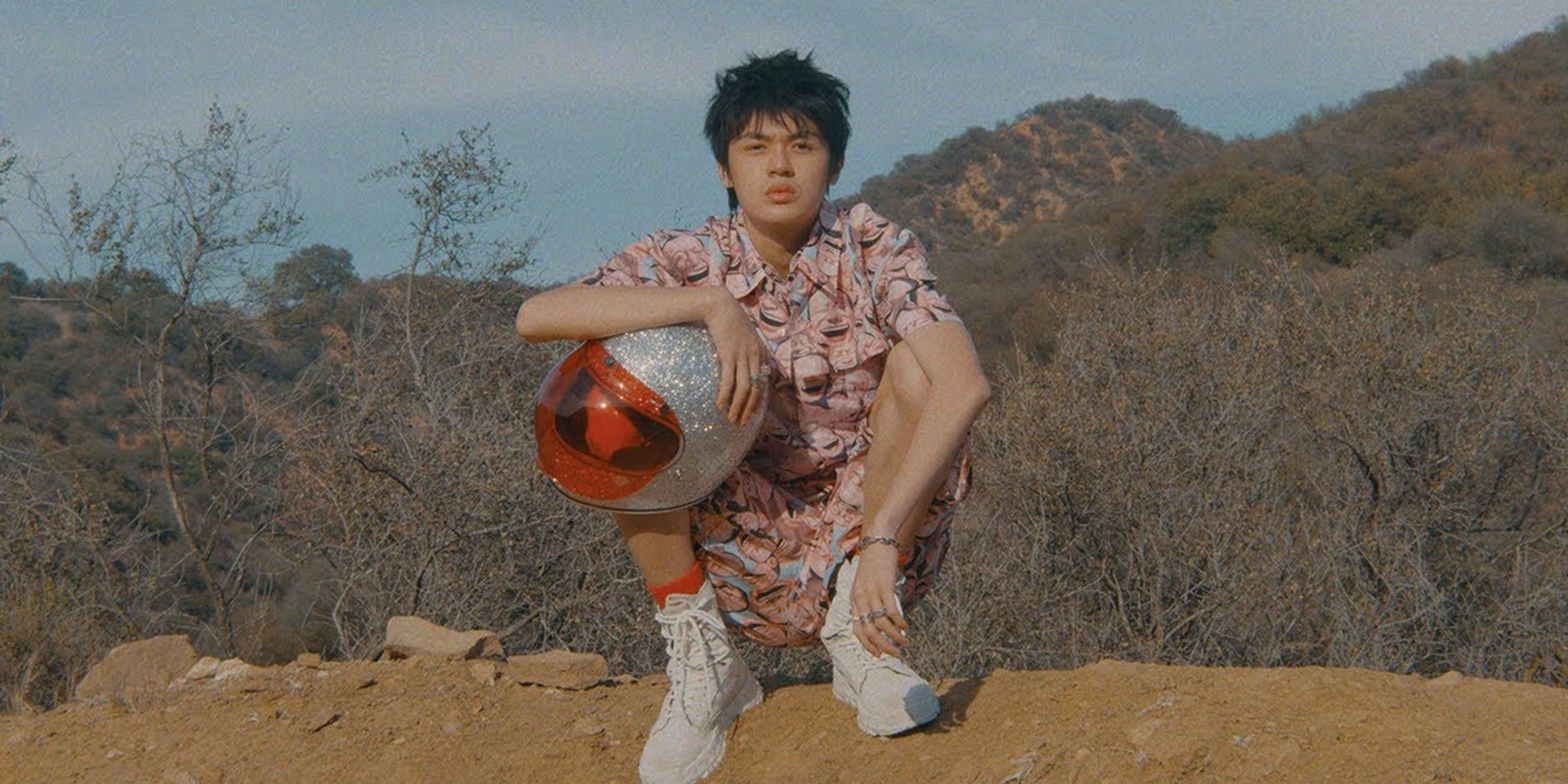 88rising's "Boy of the Year" Warren Hue has had a colourful year.

From featuring prominently on Marvel blockbuster Shang-Chi and the legend of the Ten Rings soundtrack alongside prominent artists like NIKI, Rich Brian, Saweetie, GOT7's Mark Tuan, keshi, and Seori, to performing at the Head In The Clouds Festival — all while releasing five new singles — the Indonesian artist has painted his mark distinctly onto 2021.

This is just the beginning for Warren, who shows no sign of slowing down just yet. He teases Bandwagon about his album for 2022, " I'm just working every day, making sure [the album] sounds perfect—it's gonna sound perfect. I'm making sure this is gonna be one of the most highlightable Warren Hue moments"

A lot has changed since Warren last sat down to chat with Bandwagon just a year ago. He joined the likes of Joji, Kieth Ape, Higher Brothers, Rich Brian, and NIKI in 88rising. He collaborated with ATARASHI GAKKO! for his 'omomo punk', and yet again with NIKI and Rich Brian for 'California'. He performed at Head in the Clouds, Los Angeles' first all-Asian festival. The list just goes on.

What stays constant, however, is Warren's drive to create his own unique brand of experimental music. Inspired by the likes of Tyler, the Creator and Kanye for their commitment to their own sound despite mainstream trends.

His latest single, 'WEST', is a venture into a different trap sound. Diverging from his previous releases 'omomo punk', 'Charged!' and 'Too Many Tears', 'WEST' is proof of the endless possibilities of Warren's genre-fluid style.

"It fits perfectly with the Head In The Clouds intro, man. My producer Chasu and my DJ really worked on the 'WEST' intro — for the intro of the show. It goes so well with my whole set and I feel like that's the song to open up of what I am," Warren on 'WEST'.

"It's obviously different energy; I'm trying to put that energy out there. Energy is the most important thing in like my music nowadays, that’s what I learned."

In 2022, Warren intends to continue pushing the boundaries in his music, while also taking some time to pick up the hobbies he used to do in Jakarta. Bandwagon caught up with Warren on his move to LA, the liquidity of his musical direction, and his plans for the coming year.

Congratulations on the release of 'WEST'! Could you tell us more about the song and how it came together?

I got sent the beat by Bacon and the Donuts, and I instantly thought — this is definitely gonna be something for the performance. It’s a crazy trap beat, very pretty at the same time for some reason — the chords are very pretty for 'WEST'.

It’s definitely a party song that I want to have, that was the whole theme and I stuck with it. It should sound fun. I wrote it in 45 minutes and it just happened. It has a really fun energetic energy and I‘ve never made any song like that. It’s definitely about California too.

It could be at any time. Right now, it's just more like I hear the beat and then if it inspires me, I’ll write some line down and continue from there.

I could just be keeping voice memos throughout the day, I could be eating or about to go to sleep, and I could just record myself singing some melodies or saying some lyrics for a song — it’s just very random. There isn’t a set way that I do it. I just write, I just do it, it’s just there.

For 'WEST', do you have a favourite line off the track?

Definitely "Six periods in high school turn to commas.” That’s my favourite line of the second verse because it's just hard. It’s just a cool line I think.

I'm now making money, I’m not going to high school, I’m not wasting my money on college or anything and I just want to focus on music. That’s what that line represents. It’s a cool little part in the second verse, and I think the fans went crazy too when I performed it [at Head in the Clouds]. That’s one of the highlightable moments, of the song, and it’s one of my favourite lines.

You mentioned 'WEST' is about the progression in your music career, could you give us a deeper look into how that progression is expressed? How did you envision it?

Definitely, I'm getting into more rap stuff and I’m finding my length slowly. I'm seeing what I enjoy the most with songs and 'WEST' is the perfect depiction of like 'yo let's have fun, but also have some serious moments; some moments of me being myself'.

I feel like myself on that song a lot more than other songs that I’ve made in the past year. It's just building a sound, honestly. Most likely, my next songs won’t even sound like 'WEST' at all, and that should be the point. I want to have different ideas just out there in the world, and people don’t know yet, but the album has some crazy sounds, and I want them to feel excited about it. It's coming, 2022 is the year.

How would you say WEST is different from the songs you’ve released so far — say, 'omomo punk' and 'Charged!'?

Obviously, it's more trappy. 'omomo punk' and 'Charged!' are more fast tempo but I feel even the things I say in 'WEST' are like me showing out, me being more confident in the song. 'omomo punk' is like, people have to dive into that more in order to fully understand what I was trying to say while 'WEST' is more like: it's free, it's young, it's not too much of a hard listen at all.

My mom really loves the song. Usually, she doesn’t really tap into my music but she likes 'WEST' and I’m glad. I get to play it whenever I want and she would enjoy it. I think that would be the main difference.

In addition to ‘WEST’, you also released ‘California’ this year with NIKI and Rich Brian that also talk about the Asian experience in America. What was it like moving to LA from Jakarta?

From Jakarta to LA, it's crazy. I feel like it’s obviously a different environment. Jakarta’s more city life, LA is more relaxing and it’s more peaceful.

But I’ve been liking LA, honestly, it’s more peaceful and it’s been a Journey. I like LA — I like the weather, I like the food, I like the studios, I like everything. I mean, it’s been really calm. It’s been a smooth change.

Have there been any major culture shocks that you’ve experienced?

Not really. Honestly, because I think I spend a lot of time on the internet just looking at American things or like the American culture, you know what I mean. So when I arrived it was just kind of natural to me I already knew what was going on, and how people were speaking here. It was pretty dope, I like it.

So you've recently performed at your first festival, in front of over 30,000 people no less. What was going through your mind in the days leading up to Head In The Clouds?

I was so excited but also nervous because, damn, It’s my first time ever performing in front of like 30,000 people, and it's gonna be like, 'wow'. It really hit me during the week right before Head in the Clouds. I was rehearsing, and I was like 'oh my god, I’m really gonna perform this in front of thousands, in like two days', but it was good, it was smooth.

During the day, I was like 'yeah, let’s do it. When I hopped on stage, everything just washed away, and I was in my zone. I really wasn't that nervous on stage. I was more excited and I wanted the energy to complete that. Yea, It was good.

What was your favourite moment of Head In The Clouds?

Definitely, when I got the audience waving or even jumping, that’s the coolest part of the whole thing in my opinion. because I like it to be interactive. I like it fun, man. I want them to feel what I feel when I watch shows.

When I go to festivals, or when I watch shows, I’m always a hundred percent active. I have to jump, I have to follow, and sing the lyrics as long as I can. I knew what I had to do onstage to make them do that, so I was so happy with the audience. It was such a good audience too, so props to them – really cool people.

After that, I just got so motivated to do everything. I’m working on my album now, working on songs, and I have a new perspective on a lot of things. It's been my dream to perform in front of a massive stage, especially the songs I made in high school. It was my first time hearing it live and that loud and so many people are hearing it at the same time, it's crazy. It’s definitely the best moment of the year — the festival.

Are we gonna see some inspiration from Head In The Clouds coming into the new album?

I need to start doing activities in my free time because I don't be doing anything. In Jakarta, I used to do video games, I used to bike, I used to go on runs – now I don't even do any of that. I’ve just been working crazy but it’s good though.

That’s definitely one of the goals, just to have a past-time hobby, you know, whether it’s painting or biking, or doing something. Obviously, doing more shows, and really cementing that with the album and everything, so I'm excited. I'm rooting for myself here.

Any place you want to be?

Not necessarily, honestly. It’s whatever opportunity is available, I just take it and see where it goes. I’m not trying to say like, 'oh I want to perform at the biggest arena'. I'm not hoping for that, I just want to do more shows and see my fans in real life. That's where I want to be and just do a tour even. That’s what I want to do. That’s my next big mark.