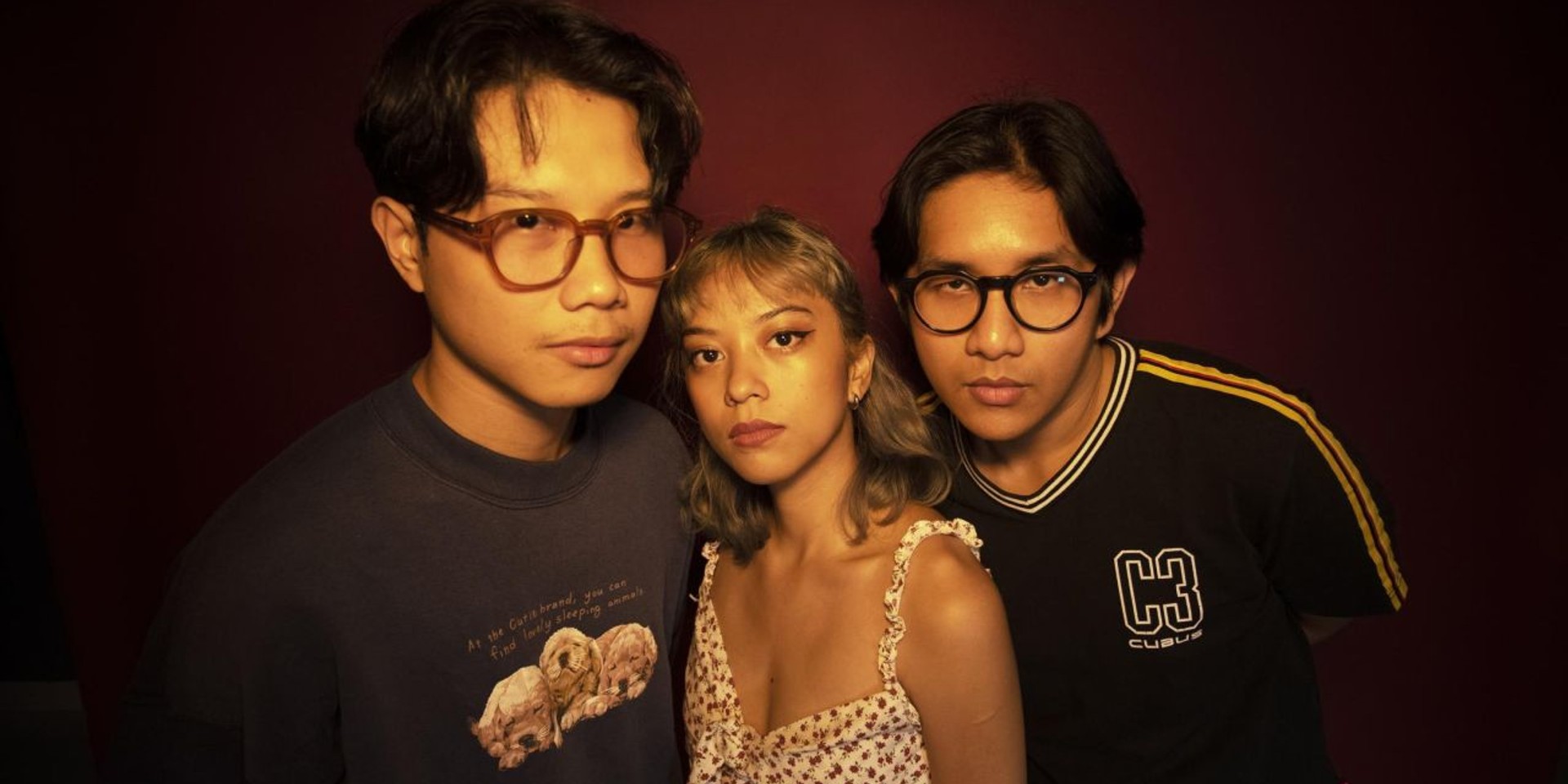 “We want to make the kind of music with catchy hooks that would stick to your mind for a really long time until it gets to a point where you get annoyed and desperate to get rid of it,” the Indonesian trio tells Bandwagon.

But “annoyed” never seems to be the case when listening to the band’s music, even after a long time. What feels like a self-realisation montage from a coming-of-age movie, Grrrl Gang’s songs make you feel like you can take on the world.

Laced with wicked guitar solos, melodious vocals, and relatable lyrics, the band’s music relays stories of youth, change, and challenging norms. Think of it as a diary, documenting the trio’s daily adventures, be it personal, social or political. 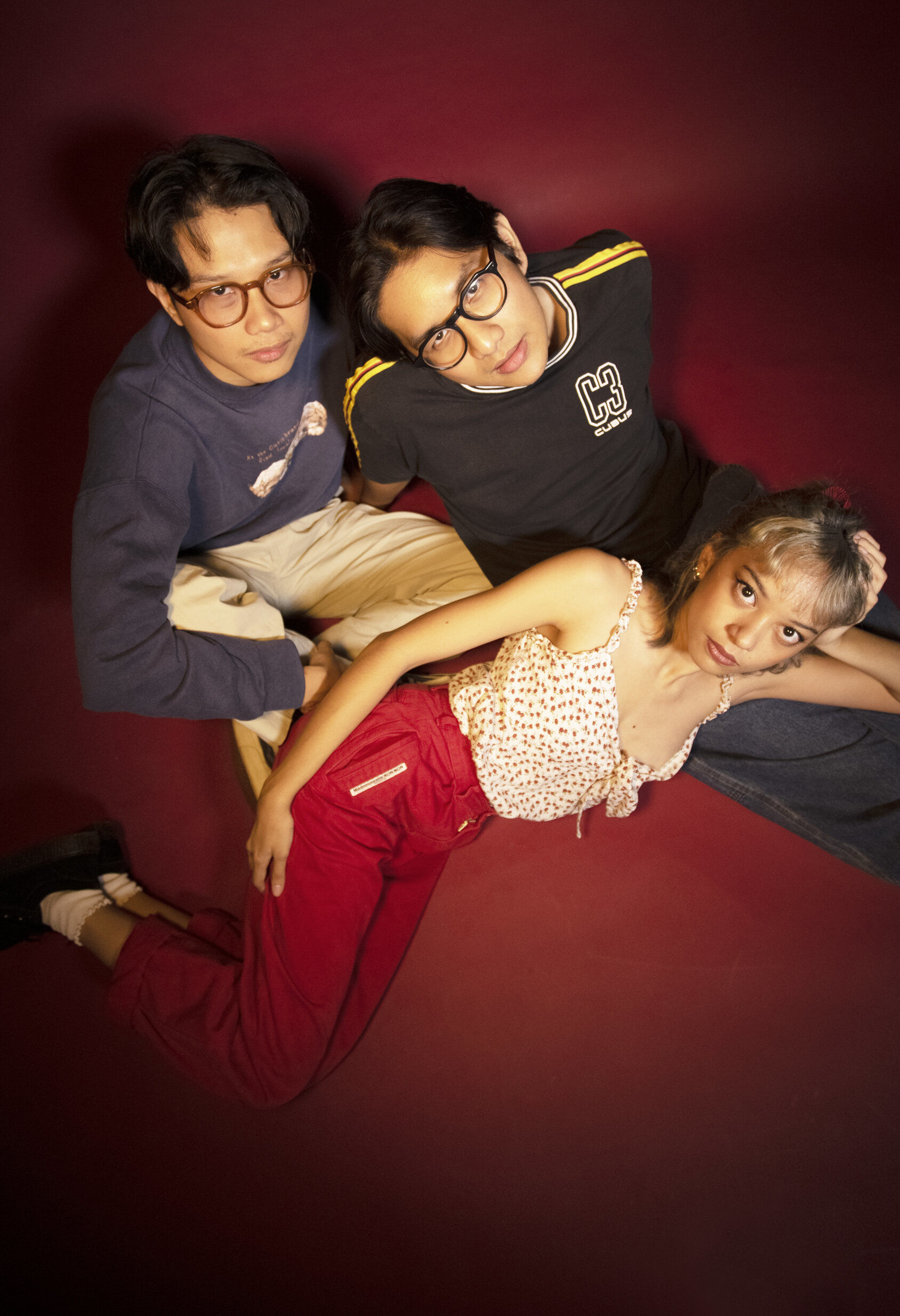 Formed in 2016, Grrrl Gang comprises Angeeta Sentana (vocals, guitar), Edo Alventa (vocals, guitar), and Akbar Rumandung (bass, vocals). Much like an actual scene from a coming-of-age film, the trio came together after an unsuspecting car ride.

“One night, Akbar and Angee went on a drive, and he asked her whether she played any musical instruments or sang. She told him she does both, which he thought was great—since he was itching to form a band at that time. So, we hit the studio to practice, but we felt like there was something missing. So, Akbar decided to recruit Edo into the band to play lead guitar, because he’s much better at playing than them,” says the indie-pop band.

From there, Angee played them a song about a high school relationship that ended up being one of their first singles, ‘Bathroom’.

“Angee wrote ‘Bathroom’ several months after she was dumped by her high school boyfriend. ‘Bathroom’ is basically a metaphor for depression and letting go of an unhealthy person or relationship. The ‘shit’ that she’s referring to in the song was actually about herself,” says Grrrl Gang.

The track also still stands as one of their most popular songs to date, with over a million streams online. It was released alongside their equally successful track ‘Thrills’, completing their double-single release Stop This Madness in 2017.

The next year, Grrrl Gang dropped their first-ever EP Not Sad, Not Fulfilled. All about youth, romance, insecurities, mistakes, and all the highs and lows of being young, the five-track record saw the band really come to their musicality.

Sonically resembling the feeling of an adrenaline rush, the EP showcased the band’s energetic and upbeat sound having taken influences from acts like Alvvays and several bands from Sarah Records.

With the EP, Grrrl Gang went on tour all across the region, performing on stages in Bangkok, Singapore, Manila, and more.

“Our first time playing in Singapore was really memorable. We didn’t expect to see people moshing and singing along to our songs,” shared the band.

Despite having toured around Southeast Asia, gaining fans and rocking out across several cities, Grrrl Gang’s favourite show is still one from back home in Indonesia.

“One of our fondest memories is when we played in a hotel bar in Bone, Sulawesi where it was filled with old men in their 40s-60s getting piss drunk. They had zero idea of who we were, but they still enjoyed our set, which was great,” says Grrrl Gang.

Most recently, the band also got to perform at SXSW Online 2021, joining acts like The Chairs, Drinking Boys and Girls Choir, Fire EX., Neko Jam, Otoboke Beaver, and many more.

“Our performance at SXSW was really fun to make! We performed three songs, including “Honey, Baby”, and we recorded it at Studio Teras Belakang in Jakarta. We’re still pretty bummed that we couldn’t go last year because of the outbreak, but we’re excited that we could at least perform at SXSW online,” says the trio.

This year, the group also released their latest single ‘Honey, Baby’, their first new material since Not Sad, Not Fulfilled. Reminiscent of the 90s, the track comes two years in the making.

“‘Honey, Baby’ was written in 2019. The songwriting process took longer than usual, because Angee had intended it to be a reflection point of her relationship at that time. She changed some of the lyrics a bunch of times, depending on what happened. What she was trying to convey was that she really cherished what they had, and she knew it wasn’t going to be easy, but she was willing to go through it. They both fell out of love in the end, but that’s okay,” says Grrrl Gang.

The group also ended up releasing four new versions of the track, covered by some of their fellow Indonesian artists.

In the past five years, Angeeta, Akbar, and Edo have been through a lot together, having toured around the region and listened to by fans all over the world; but the one thing they love about being in Grrrl Gang is each other.

“We always look back on our fun times during the tour. It’s usually not about the audiences that we think of, but the amazing local food we get to eat, the silly things one of us does that makes everyone laugh, sharing local horror stories and urban legends, complaining about someone’s stinky feet or loud snoring, and even the cabin fever,” says the group.

We suppose the best part of being in the band is getting to know each other more through moments like these. It’s also nice to know that we’re growing up together. We’re facing these things together.

With days jobs and university coursework getting in the way, the trio has yet to come up with new music but knowing Grrrl Gang, they have a lot more stories to share.