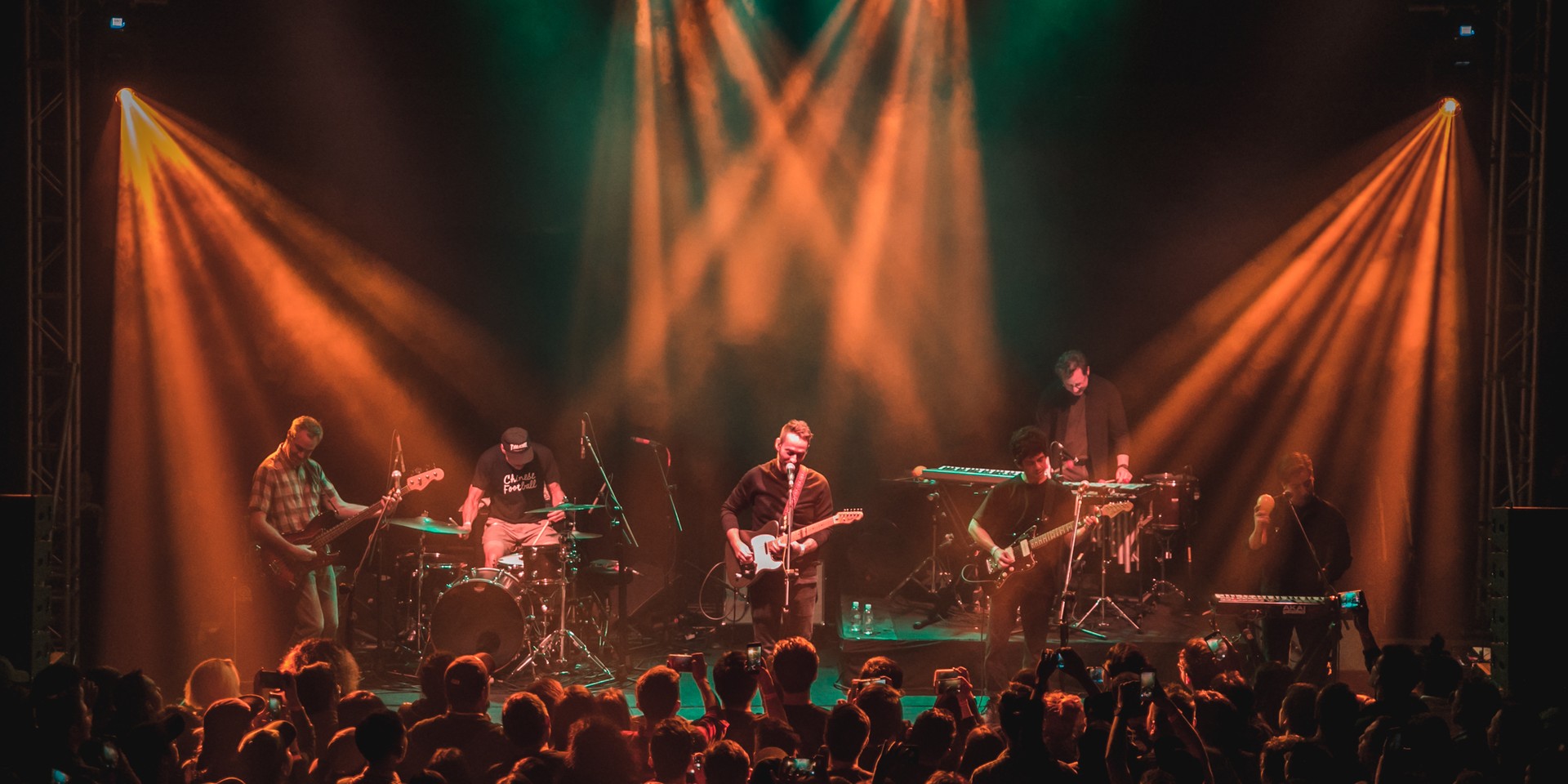 American Football have been with us through thick and thin.

Despite their 14-year break, the Illinois-based math rock act still managed to extend their evergreen music to the farthest reaches of world, across generations. Now with three self-titled records down and a very full and satisfied Manila audience, they carry on to bless music lovers across the globe with more tunes and live shows to fill the hearts of many.

Bandwagon spoke with several fans who swung by American Football's show at Power Mac Center Spotlight in Makati City last August 2 (Friday) to talk about their own American Football stories and how the band changed their lives. 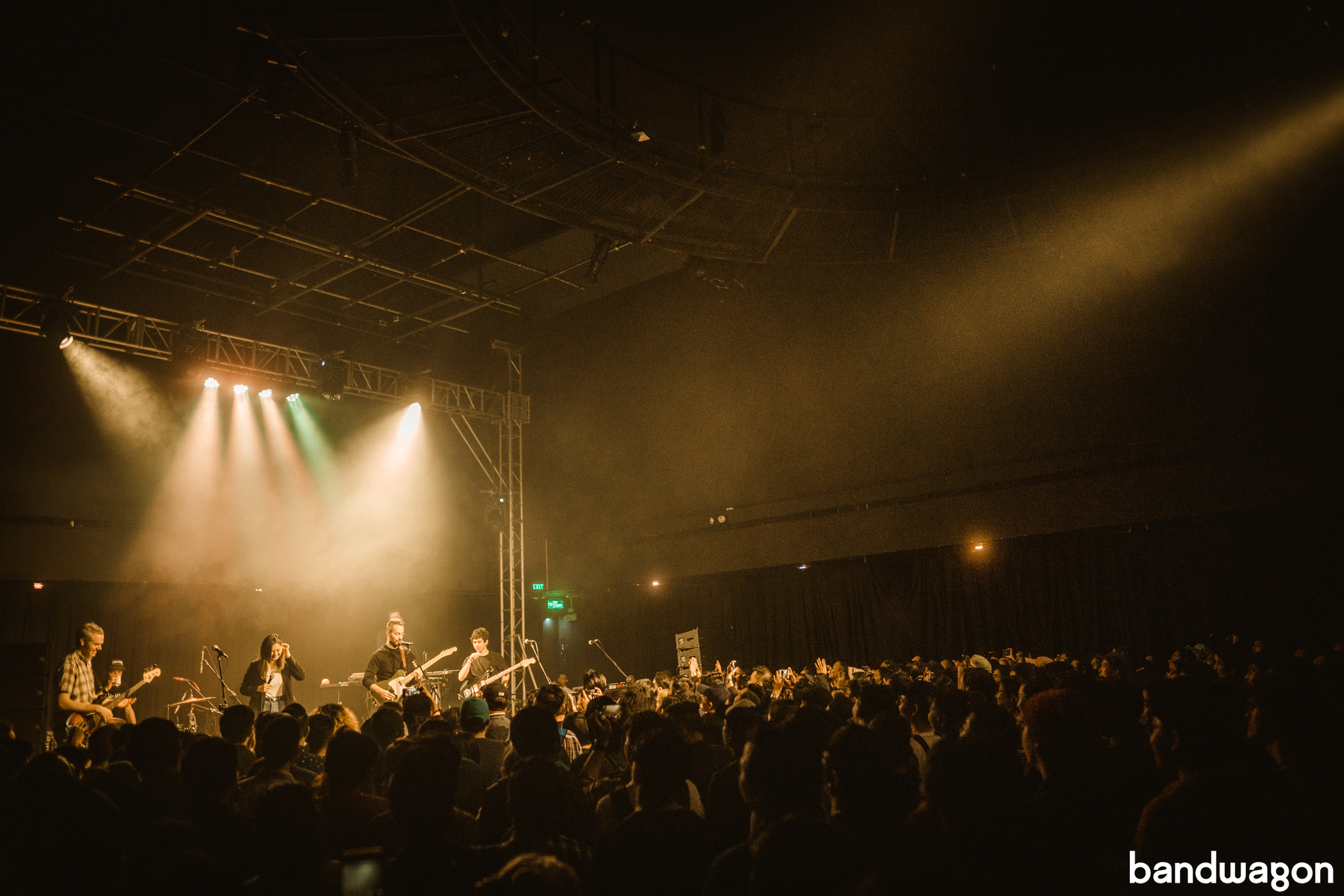 (They were so different from what was popular when I was in high school, like Taking Back Sunday. But my favorite is still 'Never Meant', that's what really caught my attention.)

(I started listening to them in 2009. I discovered them through Bandcamp. I was a fan of Flight of the Conchords and I discovered American Football from them.) 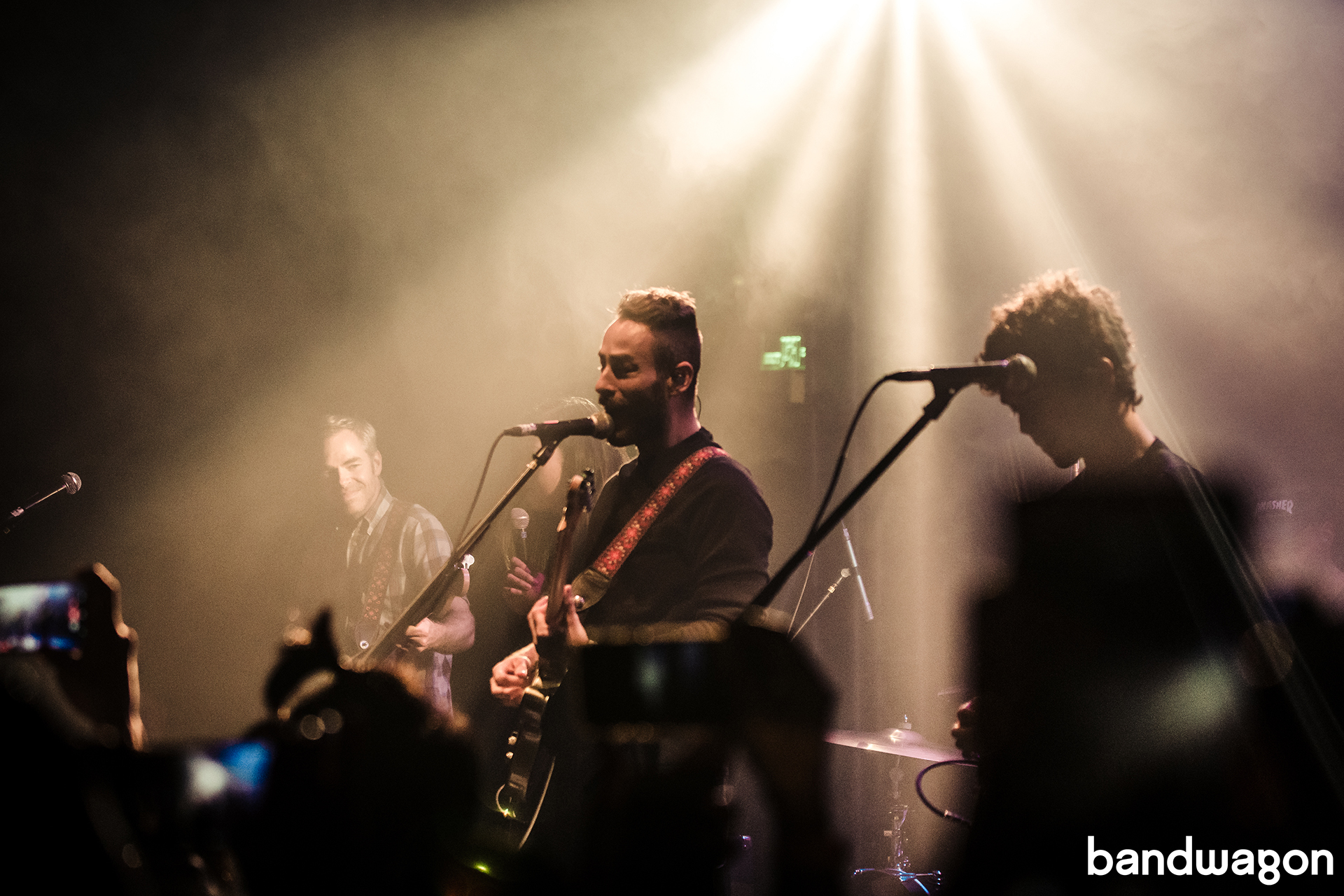 There was this phase where I was really into math rock and at the time, I wasn't sure how to go about searching for things, so I typed math rock on Wikipedia and American Football just came up, and I ended up just loving it.

I'd only heard pretty much the first album. I didn't know they released a second one, and when I found out they had a third one, I listened to a few songs from that. I really enjoyed it. It's very melancholic. It's one of my favorite go-to bands to mellow out. Their guitar tones are just so soothing.

Towards the mid-'90s, I was in my indie phase. I was buying stuff from Velocity Girl, The Mountain Goats, California Oranges. I was really into discovering all these bands and for a while I worked at Virgin Records, so I had this opportunity to check out all these new bands. Oddly enough I saw this band on the list and it said "American Football," and so I thought it was an unusual name for an indie band, but I knew I shouldn't be surprised. I checked them out. I really liked their first album and I remember I got a CD of it.

I think I really became a really big fan of theirs when they came back. Actually with their third album. I'm a massive Slowdive fan, so when Rachel Goswell was included in the record, and I realized it was American Football, I was pleasantly surprised. Listening to it was like when I first discovered them, and I was like, "These guys were ahead of their time."

If you listen to bands like toe, you see a lot of things that they do in American Football. 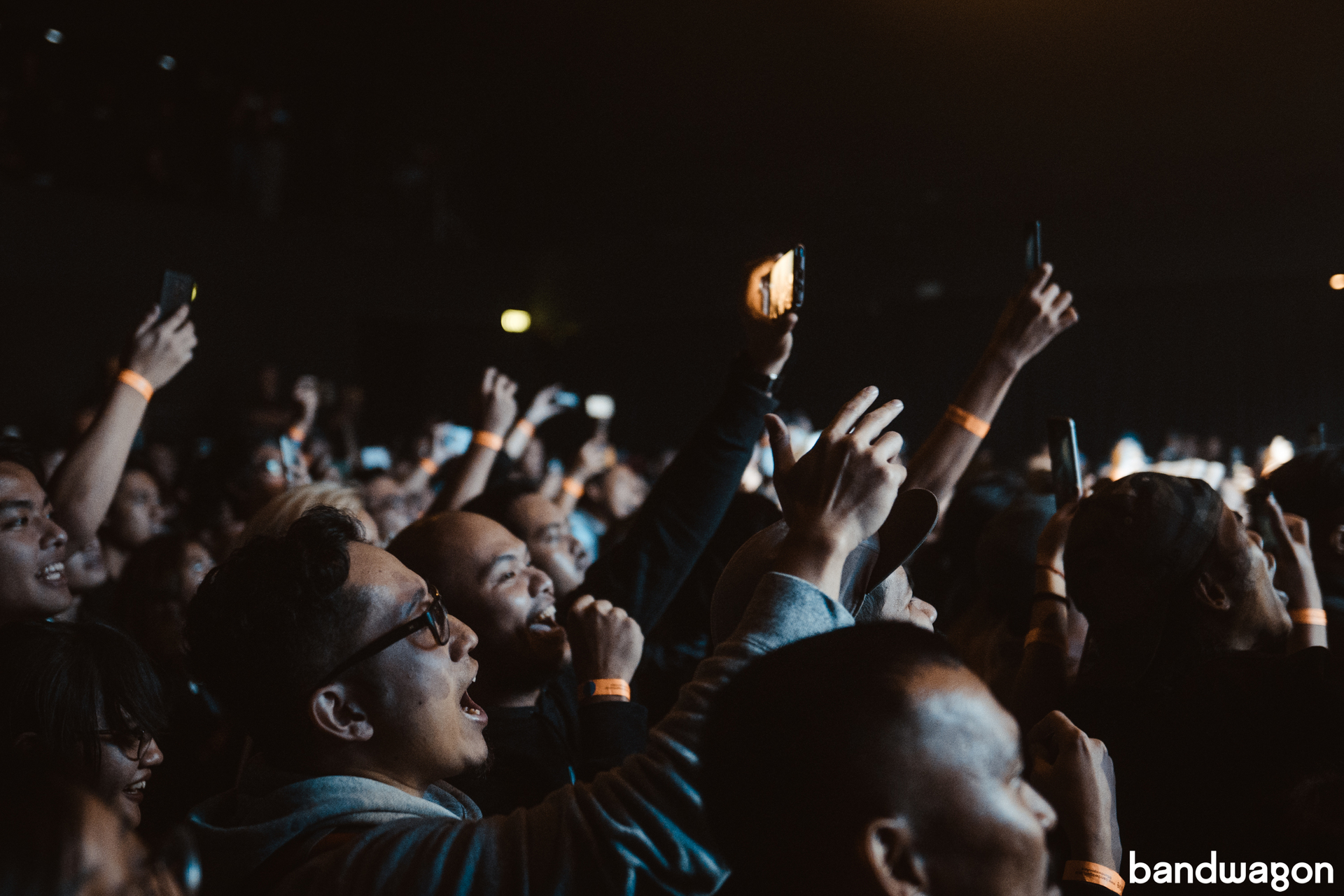 I first listened to American Football when I was in third year high school. I was playing guitar back then and I really liked how the guitar sounds, how they played it, but I couldn't play it cause alternate tuning at hindi ko gets. Nakatugtog ako ng American Football college na, because doon ko lang na-gets yung alternate tuning and I never stopped listening to it ever since. Lalo na sa bus, pauwi from school. Kahit nung nagwo-work na ko.

(I couldn't play it cause alternating tuning and I didn't get it. I was only able to play their songs when I was in college, that was the only time I understood what alternate tuning was and I never stopped listening to it ever since. I would listen to them on the bus, on my way home from school. Even when I was already working.)

(I started listening to American Football when I was a college freshman in 2001. Punk was my thing then. The band was my intro to "emo", alongside Thursday, Taking Back Sunday. I've been listening to them for a while. I've been waiting a long time for them to come and play a show here. They're on my bucket list of bands I wanna see before I die.)

I knew them from my ex (laughs).

(We used to say that if the band comes to Manila, we'll watch them together. But we broke up. I'll be watching alone.) 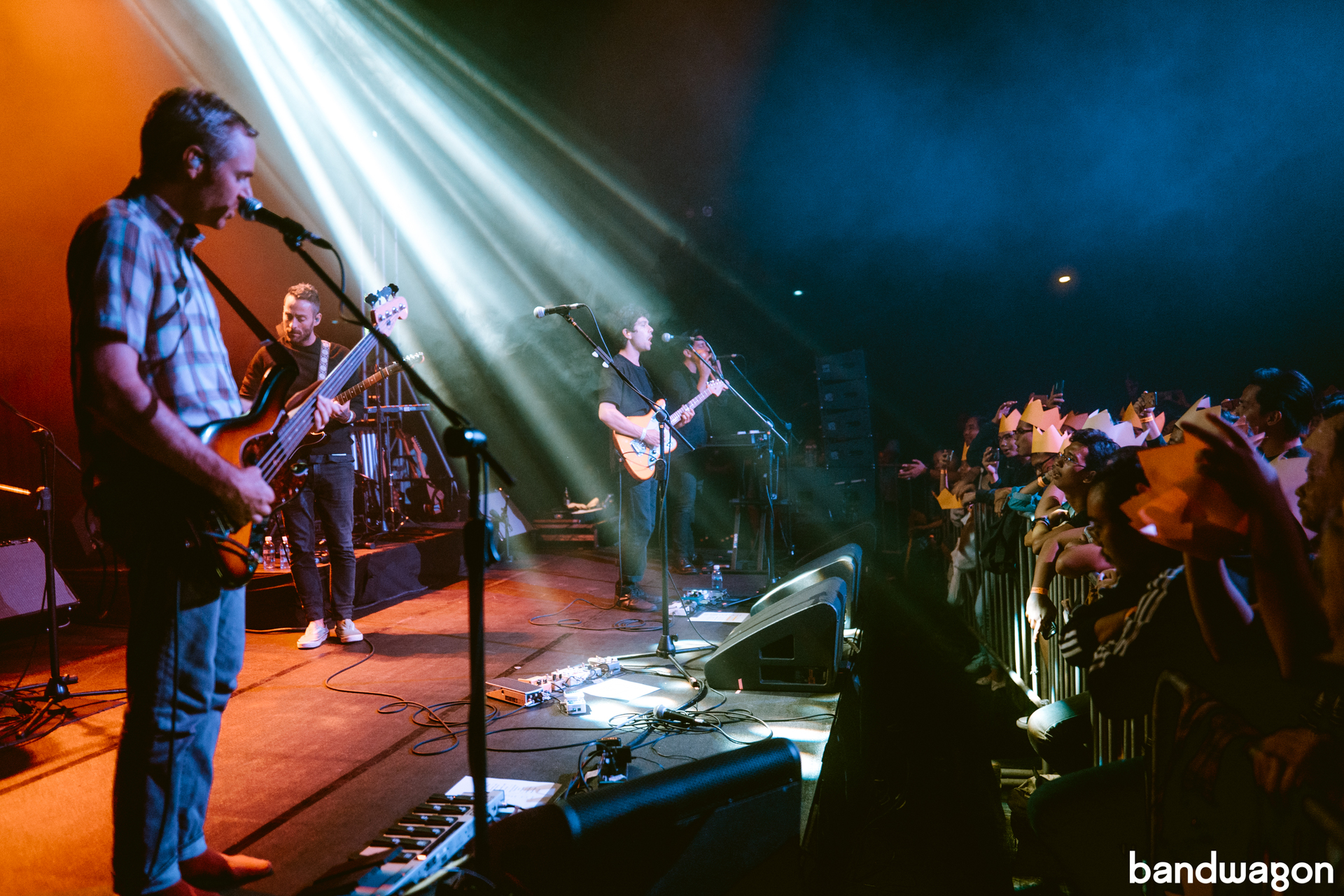 I can relate to so much of their songs, especially when I'm being emotional. Most of their songs are relatable. From family, like how it changed with the lyrics, with the growth and development, with adulthood.

I first heard about them through my friend Jake way back in early 2000s. [Around the same time] I met Chi [Resurreccion] in Makati, naglalako lang sila ng CD nila ng Typecast sabi niya, "Oy, pare may banda akong Typecast!" Sa pila yun ng FX. Yun yung time na na-discover ko sila. (Chi was selling CDs of his band, Typecast. We were waiting in line to ride the FX. That's when I discovered both bands.) 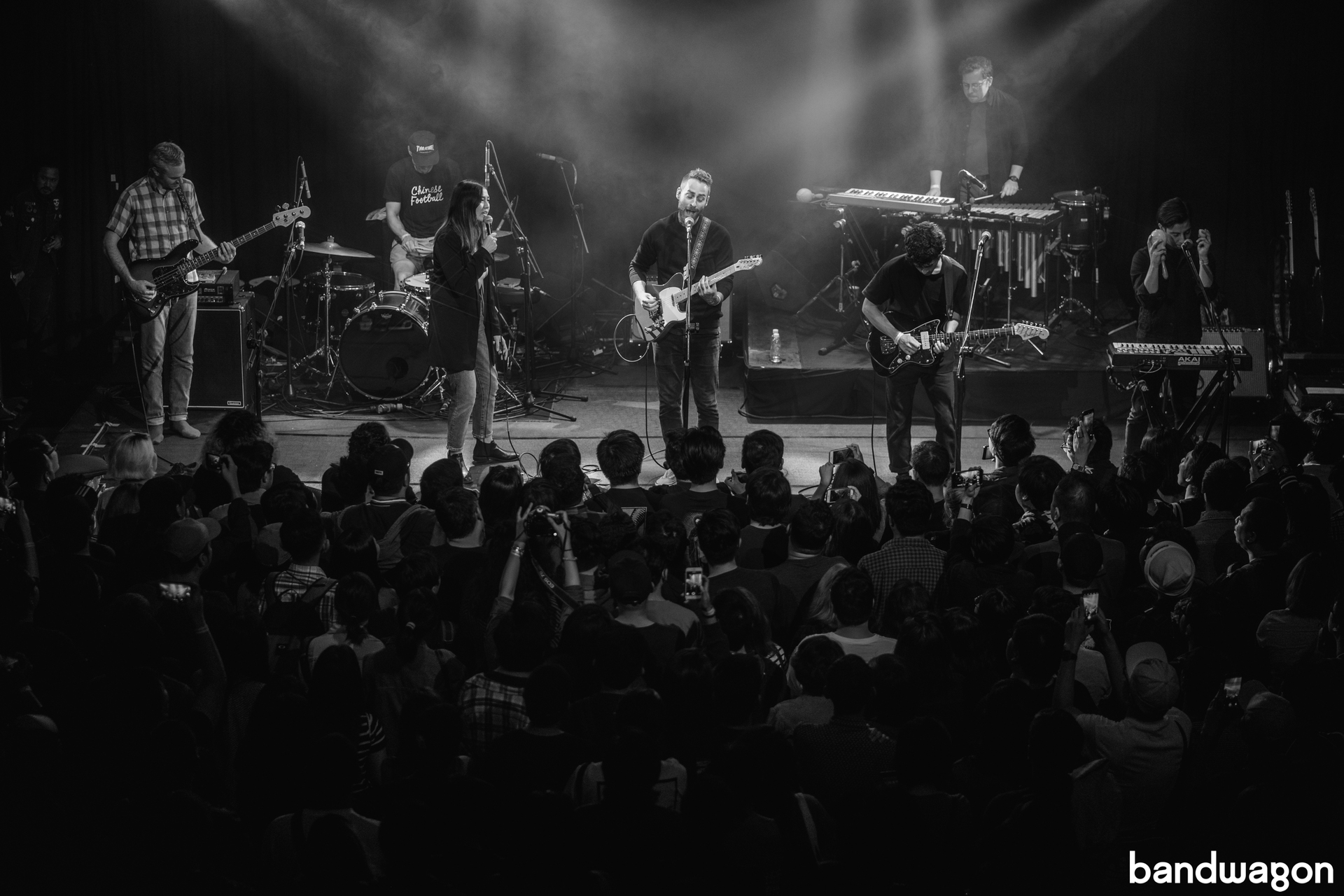 The first song I heard from American Football was 'Never Meant' and I forgot but I think a friend introduced me to them. I was amazed at that time that they sounded like this in the late '90s.

Anyway, what made me dive deeper in their music is when many of my favorite bands would cite them as a major influence. I'm really into math rock and the bands  I really like always mention American Football as an influence. This is when I started to to listen to the first album over and over again. This is the time I fell in love with their music. The odd time signatures, the crystal clean guitar tones, the vocals, the trumpet, everything (laughs).

I was very happy they released their second LP in 2014 and third LP recently, because I wasn't expecting for another American Football to come out. At this point, I understood why my favorite bands always cite them as one of their major influences. I think they opened the door and paved the way for this type of music, so thank you American Football!!!!

How was your experience watching them live in Manila?

It was amazing! Thank you Bandwagon for bringing them here! It was an unforgettable experience. I was really immersed in the concert that I forgot to take photos or videos (laughs).

I also want to give a shout out to Dorothy [Cruz] of Run Dorothy. She was amazing! The songs she sang on gave me goosebumps! Actually I think the whole night gave me goosebumps. But yeah, It's really amazing to see one the bands that had a big part of shaping my musical identity.

(We were on tour in La Union and that's what we were listening to. Since 2009, I've been listening to American Football. It helped me through my sadness. I still listen to it when I go biking.) 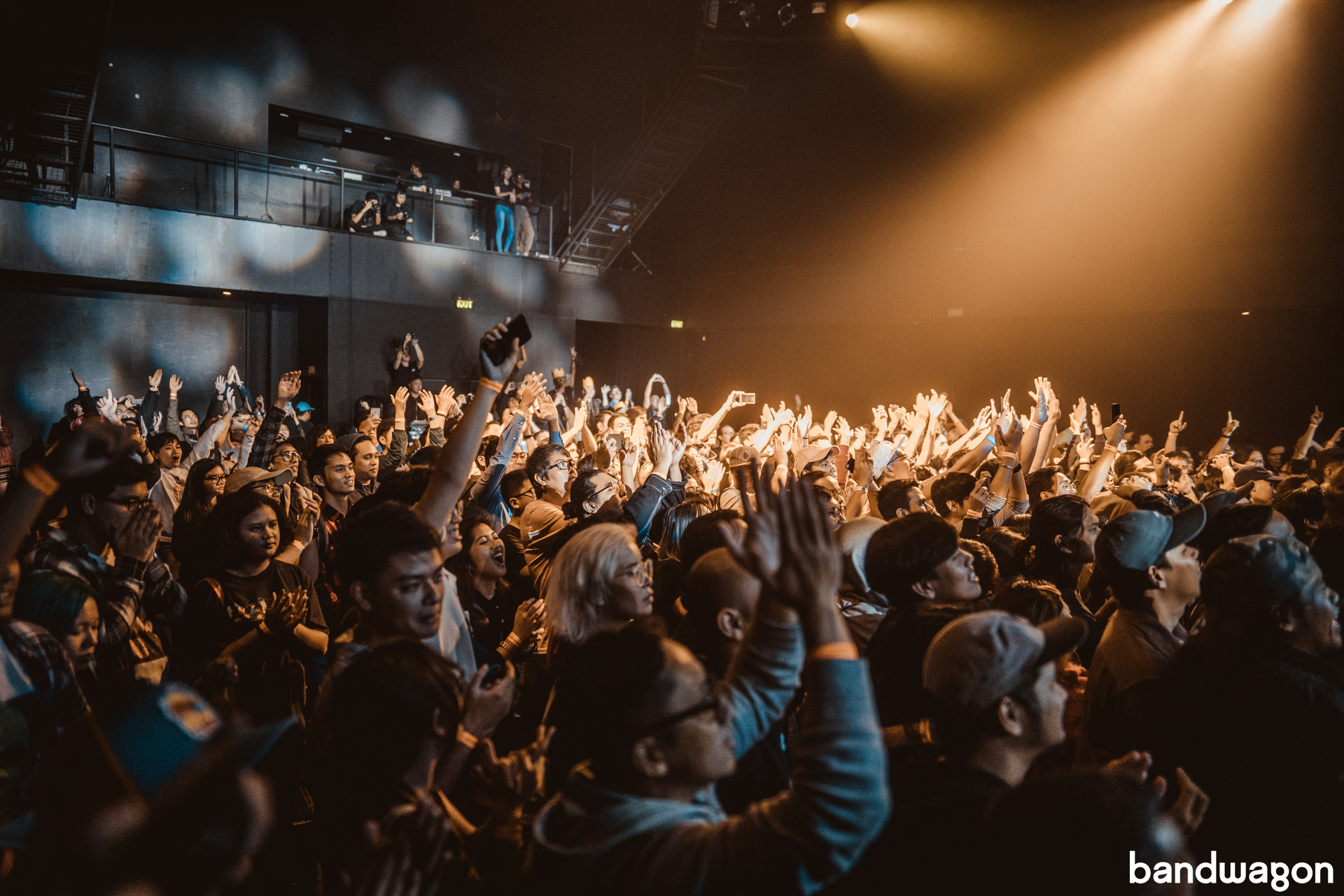 I got a burned CD in college (laughs). At first, nanibago ako kasi yung time na yun ung emo scene or yung punk-rock sobrang ingay. Sila very different, it took me a while honestly to get into it. After a while, after listening to it all the time, naging favorite ko na yung buong album until ngayon.

(At first, it sounded strange to me because at that time emo or punk-rock was kind of loud and noisy. They were different, it took me a while to get into it. After a while, after listening to it all the time, LP1 became my favorite album.)

I listened to them in college and Penpal, that era of music. I'm kinda sad they're called "Dad Rock" now, cuz that's just normal for us. Does that make me a dad? They're called emo now. That's not emo. That's called feelings. Math with feelings! 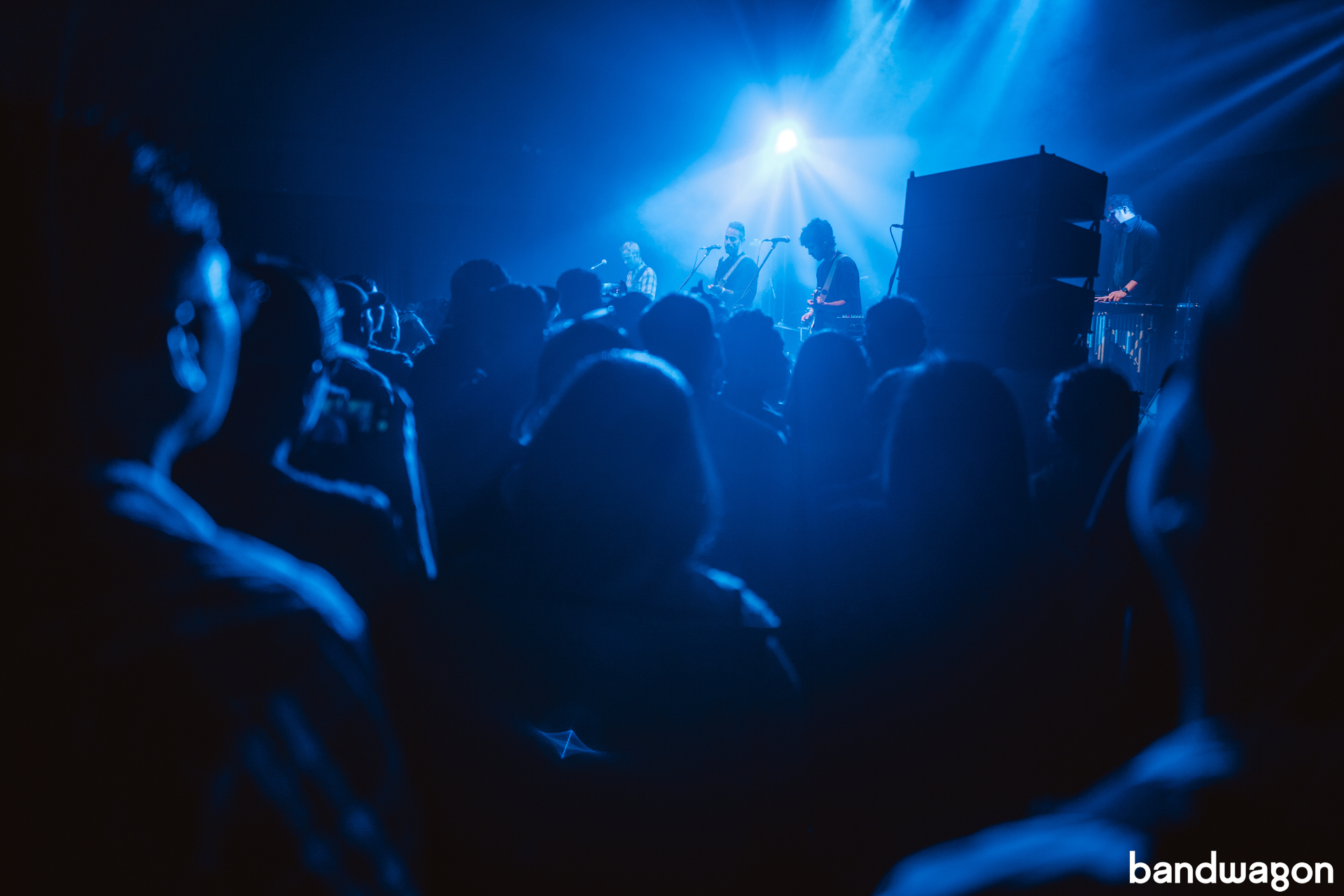 I discovered American Football when I heard their name mentioned in 'Home For Fall' by Real Friends way back in 2012 (I was in second year college). I searched their name on YouTube and the first song that popped up was 'Never Meant,' I was instantly hooked. I found their whole first LP on the internet and just listened to it over and over again. I've been listening to them ever since.

Fast forward to 2014 when I started working in a company with Ethan [Salazar](our drummer), I remember letting him hear 'Never Meant' in the office for the first time—he loved it. Not long after, when we decided to form a band (Forgetful Bob).

'Never Meant' was one of those songs we really wanted to jam and try to cover while we were still figuring out our sound. American Football was one of the bands we really bonded over. That's why seeing them live was such a full circle moment for us, we got to share and experience that moment together! Life is full of unexpected blessings.

How was your experience watching them live in Manila?

Seeing them live for the first time in Manila was crazy emotional. I teared up during 'The Summer Ends'—that song really hit home for me. I didn't expect to feel as much as I did when they played it live. It's still super surreal that we actually saw them play our favorite songs live, and we got to see our heroes up close. I never imagined I would see "Never Meant" live, it always seemed so far fetched, I still can't get over the fact that it happened.

I've always been a huge Mike Kinsella fan since he's behind some of my favorite music (Owen, Their/They're/There, Cap'n Jazz, Owls, etc.) so seeing him was crazy! Steve Lamos is such a great and unique drummer - Ethan was fixated on him the whole set. It was really a night to remember, the icing on the cake was Typecast opening up for them. We are huge Typecast fans as well, so that was just the best experience we could've ever hoped to have.

A few years ago I painted the album cover of LP1 just for fun at work. When I found out they were coming here I thought to give it to American Football so I did and wrote them something on the back and Dee gave it to them! 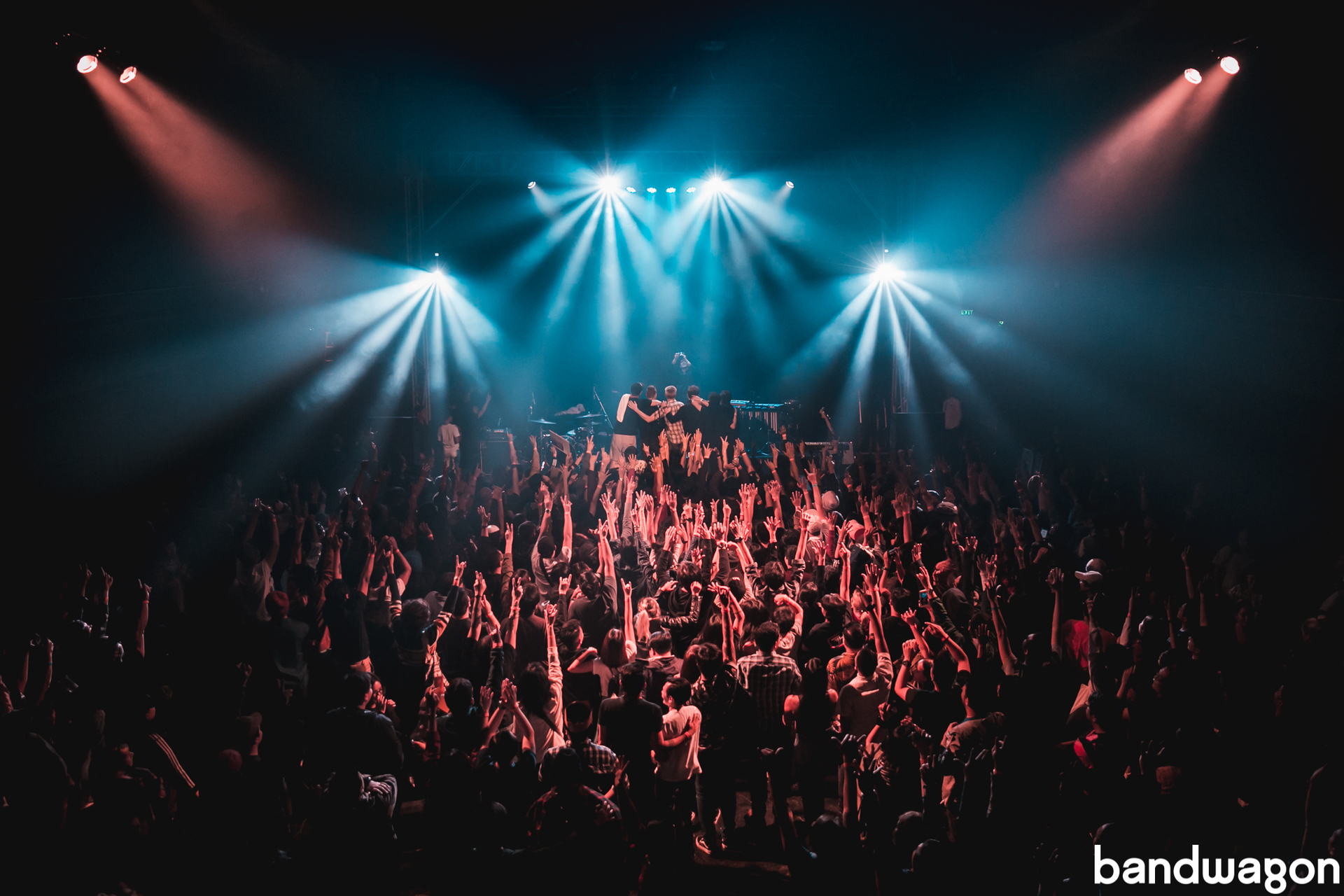 American Football Live in Manila was brought to you by Bandwagon and Independent Play. This event is supported by Johnnie Walker.