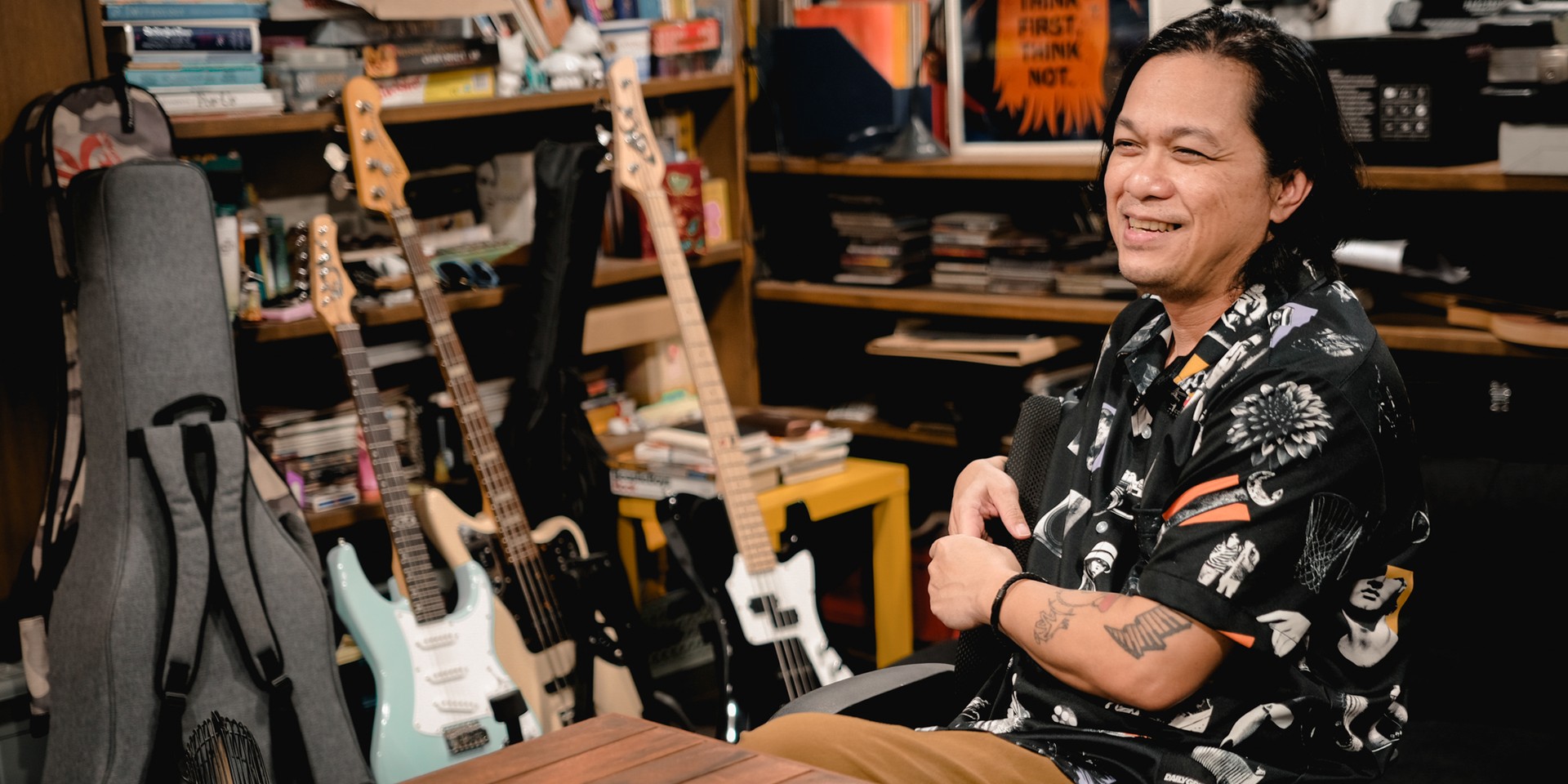 For a guy who's been retired since August, Raymund Marasigan is busier than ever.

It was raining crazy all over Metro Manila on Monday (19/09), but that didn't keep him from being the responsible man that he is and running errands. In fact, the past week had been insane. Between Party Pace gigs with Badjao de Castro and Eco del Rio, prepping for Sandwich's No Goodbyes mall tour and their upcoming U.S. tour, to producing music for up-and-coming artists, there was a historical event under wraps that would ruin his retirement, at least until December.

The Eraserheads are returning to the stage for a special one-night concert. Titled Huling El Bimbo, the show will be taking place at the SMDC Festival Grounds (it's near Mall of Asia) on 22 December 2022. That's basically everything Marasigan could share at this point, but there is a story he wants to tell leading up to the second his phone wouldn't stop buzzing with messages from friends and relatives he didn't know he had. Before anything else, he wants to let everyone know that he doesn't know how or where you can get tickets (but you can get them here, eventually). The morning after Sandwich played a killer show at 19 East in Sucat last week, Marasigan—who now wants to be called by his new nickname Rayray—was woken by Darwin Hernandez of Soupstar at 9 a.m. for a meeting. "I'm here outside your gate. I'm picking you up. We have a meeting with some people," Hernandez said over the phone.

Hungover from the night before, whatever took place from that moment on was a blur. Marasigan had his daughter, Atari, with him so he wouldn't have to repeat everything to her later, but mostly for her to absorb all the information on his behalf. After the meeting, Buddy Zabala turned to Marasigan and said, "See you later." Slightly disoriented, thinking about the launch of his new Allryd jerseys with Party Pace at Suez & Zapote in Makati City, Marasigan asked, "Are you coming to the show?"

Apparently, there was another meeting happening that night sometime between 6-8 p.m. But Marasigan doesn't check his email, so whatever messages that were sent his way weren't read. "In my mind, it wasn't gonna happen tonight," Marasigan says. "I said to myself, 'I've seen this. It's not gonna happen.'" But it did. Hernandez called Marasigan over for the meeting, and he hopped on his bike and pedaled from Makati to Taguig, arriving drenched in sweat while the people he came to meet were dressed to the nines.

"It was awkward," Marasigan confesses, chuckling to himself, as he looks back at what transpired during their meeting. "Obviously, we are famously not close, especially in the past few years. Kami lang ni Buddy, we have no problems because I see him every week. With the four of us, it's really, really awkward. We haven't talked. We've been distancing from each other. Pero buti na lang the kids and partners were there. Wala naman silang issues. Then when it was finally over after a few minutes, I said, 'I gotta go. I have a gig to play.'"

That wasn't the end of it. Marasigan had a blast at his Allryd gig with Party Pace, but he was dragged out of bed yet again the following morning for a photoshoot. Yet again, it was awkward. Luckily for Marasigan, he was backed by his Party Pace bandmates, who joined him at the shoot with Xander Angeles for emotional support.

"It was the first shot. The most critical," Marasigan recalled, cringing at the memory of the quiet studio. "Fifty people have their cameras and phones. You're all dressed, made up. You're not a model. You don't know how to pose without a guitar. Behind the drums, I can get a hundred different shots and I'll look good—but without a guitar and with four other awkward grown men... Tahimik eh. Walang usap eh. The four of us are awkward together ever since—it's nothing new. We're not comfortable without equipment. We're not comfortable with each other."

To break the silence, Marasigan brought out a portable speaker and the first song, to De Castro's dismay, was 'Mundo' by IV Of Spades. "Nakahinga lahat, kawawa si Badjao," Marasigan laughs. "Gotta take one for the team. Tapos madali na. It was music [that helped us overcome awkwardness]." The music then shuffled to Rivermaya, which made everyone laugh, then Tame Impala and Run the Jewels. "Gumaan na. Between takes we were talking about how to approach [the concert]. How many songs to play. What to play." For someone who casually bikes around his village at a "party pace," the past few days for Marasigan have been rather hectic. It probably wouldn't have been if he'd checked his email every now and then. But leading up to the announcement, he talked to his friends and daughter for advice. "Diego [Castillo] and Mon [Punzalan] had the best advice," he shares. "Si Mon, sabi niya, 'Settle your differences muna before you do anything.' So we got that sorted. Diego's best advice was, 'If you sign the dotted line, you would have to take all of your differences and set it aside, because it's not punk rock to be onstage and not be completely in your heart. That's not what The Clash taught you. I don't know how the others feel, but that's the Sandwich code. You go onstage with a full heart. You have to learn how to set other things aside, otherwise there's no point.'"

Marasigan's top concern revolves around the overall fan experience, including their comfort. He hopes for a better sound system, better people to fix the sound, portalets, and quick turnarounds for beer and food this time around. As for other acts involved, he has some in mind, but none that he can divulge just yet, but he assures fans that the show likely won't just be a three-hour Eraserheads-only event.

He also hopes for an official livestream of the concert. Considering how the new normal for concerts is to go hybrid and the thousands of overseas fans who would hope to catch the show, it would certainly be a great direction to go in.

Visually, Marasigan foresees the concert being set up in between the ways Phoenix and U2 stage their shows. "Simple but stunning," he says. "It's always been like that for Heads shows, because they don't move around. They're mostly stationary. We already have people in mind for the visuals, but very, very simple lang. I don't want it na parang Katy Perry na may sharks and balloons and backup dancers." "There's going to be backlash, I'm preparing for that as well. Guguluhin rin mga kapatid ko. Ginugulo na nga anak ko. Suddenly I have more friends than I thought. Some people will disagree that we shouldn't be playing anymore," Marasigan shares.

On the resurfacing allegations against bandmate Marcus Adoro that first came to light in 2019, he says. "If you're my friend, seek me out we can talk about it privately. Publicly on social media, any statement can be misconstrued. Nobody wins. I hope the issue between the parties gets resolved soon. I really want to respect the privacy of those involved, and sincerely hope they all find peace of heart and mind."

Marasigan doesn't know exactly what's beyond the horizon following the concert (which he personally doesn't want to call a reunion because he sees Zabala every other day), but the one thing he wants to do before anything else is to rehearse and decide on the setlist. A rehearsal space has been chosen. It's just a matter of setting the date. Just make sure it isn't sent via email.