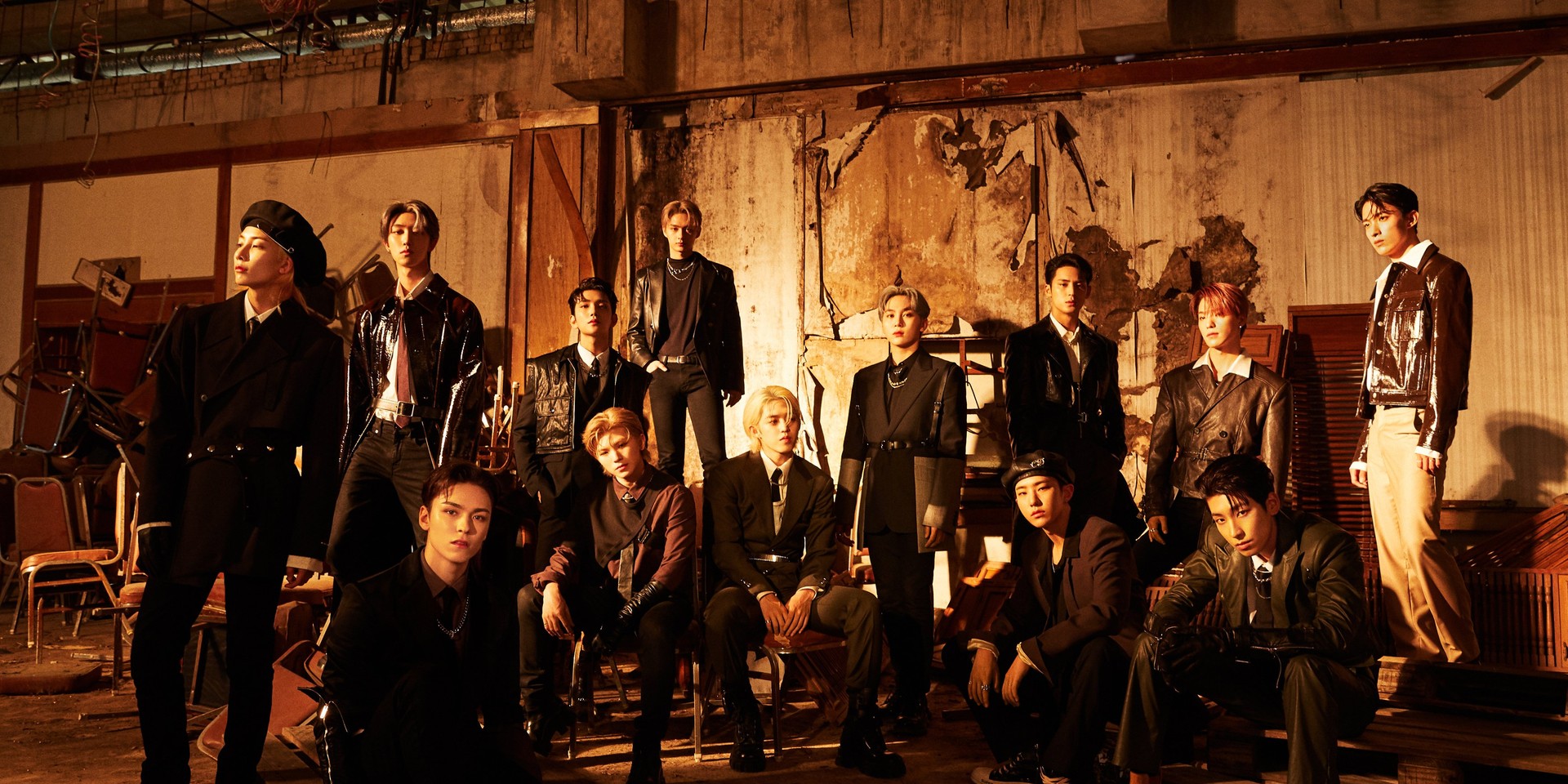 The renowned K-pop group have returned with their latest mini-album, Attacca. Released today, 22 October, the record comes as the latest addition to their year-long Power Of Love project, following their last mini-album, Your Choice.

In a press conference held ahead of the release, SEVENTEEN shared how Attacca talks about a deeper and more passionate form of love and what it means to them. The mini-album sees a more "mature side SEVENTEEN", and documents how they've grown and how their perceptions of love have evolved over time.

"Attacca deals with and highlights passion and what it means SEVENTEEN. It shows a more dynamic and a more passionate type of love," explains Mingyu.

"The name of the album refers to the musical terms of one movement to the next with pause, so it illustrates how we express this unstoppable kind of love. Fans can look forward to a new type of SEVENTEEN and the different messages we're expressing through our music," says Woozi.

Living up to their nickname "self-producing idols", the entire group also helped put the album together, adding in their own stories and experiences and a sense of sincerity to their songs.

"The key to SEVENTEEN's sound is our sincerity, it comes from our experiences as a group and as individuals. I think our participation really reflects in our tracks and to our listeners," says Vernon.

Attacca features seven tracks including their lead single 'Rock with you', which Jeonghan shares "expressed the deepening emotions of love against a very energetic melody".

"It's about always wanting to be with someone you love and how you're willing to do anything for that person," he adds.

"The song has many charms, it's really fancy and passionate and also quite sentimental. It has this kind of aggressive expression of love, unique to SEVENTEEN," adds Seungkwan.

Attacca also features tracks performed by the group's individual units, which include 'PANG!' by the Performance unit, 'Imperfect Love' by the Vocal Unit, and 'I Can't Run Away' by the Hip-hop unit. The mini-album also sees the group's first-ever English track, '2 MINUS 1' that was written by Vernon and Joshua.

"Joshua and I worked on ['2 MINUS 1'] together, and it's a chance for us to give back the love we've received from CARATs [SEVENTEEN fans] all over the world," says Vernon.

"We tried to express in a very bright way the sadness of parting, using emotions that are drier. Since this is our first English song, we hope that CARATs will love it," adds Joshua. "Vernon suggested we try doing 'pop punk' and it reminded me of the 2000s so we thought it really fit the theme."

The album follows SEVENTEEN's recent announcement stating that their Chinese members Jun and THE8 will be heading back to China to focus on activities there, while the rest of the group will continue promoting in Korea as an 11-piece.

When asked about their thoughts on promoting as an 11-member unit, Seungkwan shared, "Since our debut, we've always had 13 members and always performed as 13 members so of course, we feel their absence and emptiness. Not just during our promos but in our daily life as well, we've always been together so we really miss them."

"It's our first time doing our promotions with only 11 members but we still think we're working with THE8 and Jun in spirit," adds Wonwoo.

Attacca is one of SEVENTEEN's most popular releases to date, garnering over 1.4 million pre-orders upon its initial announcement. This comes as one of the most recent milestones the group has achieved this year, following recently landing on the Billboard 200 chart.

"We know that this record is not something we achieved on our own which is why we're very grateful to everyone who worked hard with us. More than anything, we are very grateful for our fans who have given us so much love and support. We feel more responsibility to return all the love with better music and albums, we will work harder," says S.Coups.