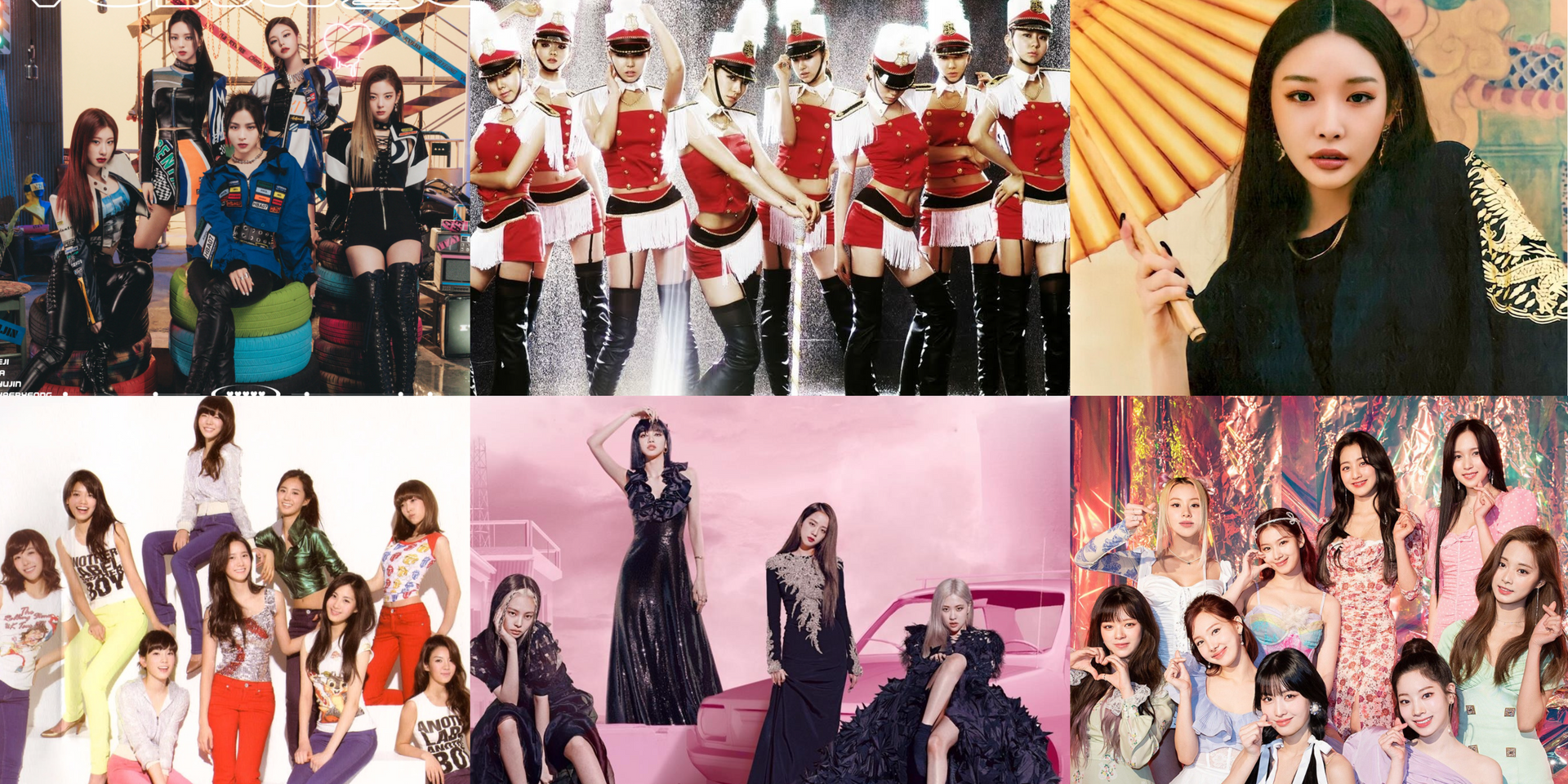 To celebrate Women's History Month this March, let's honor the women of K-pop who have graced our screens and dominated the music charts through the years.

Dance has always been central to K-pop since the first generation of idols debuted, resulting in the many iconic dances we have all come to know and love. From old-school tunes of the first-generation idols to the newer 'noise' sound of the later generations, the dance styles of girl groups have evolved tremendously.

First up, Queen of K-pop, BoA. It's safe to say on any dance list, the idol of idols must be included, and her 2012 hit, 'Only One', is a must on the list of iconic dances.

The song was nominated for MAMA's 2012 Performance of the Year award, and in the year 2012, it was all you could hear on the radio. With a girls hip-hop choreography, the dance stands out among a slew of more feminine styles accentuated by BoA's personal groove that adds flavor to the dance.

Surrounded by a team of male dancers, BoA matches them in strength, showing her title is fit for no one but her.

When the intro beat plays, our bodies immediately start moving to the instantly recognizable dance of After School. Taking on the concept of a marching band, the group practiced playing the drums for five months with a trainer and is the first-ever group to do a marching band concept.

Leader Kahi proposed the concept after watching the American film Drumline, and we have her to thank as well for the group's reunion last year with Jungah, Jooyeon, Bekah, Raina, and Kahi herself performing 'Bang!', looking exactly the same as they did 10 years ago.

'Bang!' blends soft feminine moves with the strong structured moves of a marching band, and combined with the complicated drum sequence, the dance is one of its kind, and one to stay in our memories forever.

Throwback to 2009 and one of its greatest hits, 'Gee', by the nation's girl group, Girls' Generation.

The bubblegum pop and electropop song is interspersed with elements of techno that became the best-selling single of 2009 in South Korea and was named Melon's most popular song of the 2000s. What made it more impactful, however, was the choreography for the performance. With minimal but unique moves, the dance and song quickly went viral and is still one of the iconic dances everyone somehow seems to know the moves to.

When we think 'woman', Sistar comes to mind. Masters of the 'mature woman' concept, the group not only has beautiful voices but graceful lines as well. Try dancing in high heels, and you'll know how hard it is to balance, let alone dance. However, Sistar shines and showcase finesse all throughout the performance.

Fitted in high stilettos, the members — Bora, Hyolyn, Soyou, and Dasom — walk and glide gracefully across the stage, almost as if they were born wearing high heels. The sensual song is matched by an equally sensual dance that is just right, evidenced by the numerous dance overs by many young girls as they mature into women.

Another group dominating the brand of the 'mature woman' would be none other than Girl's Day. Their 2014 title track, 'Something', from their fourth EP, Everyday 3, reached over a million views within a day and was their highest-charting single, taking over South Korea — and the world as the Hallyu Wave spreads.

Alluring, mysterious, and seductive, the dance teethers the fine balance between sensuality and provocativeness, making the performance a feast for the eyes. 'Something' won Best Dance Performance at the 2014 MAMA awards and remained in the top 10 of Korea K-pop Hot 100 for eight weeks on the Gaon Digital Chart, becoming one of the era's defining songs and dances for young people.

With her numerous accolades of awards, Sunmi has numerous viral dances including '24 Hours', 'Full Moon', 'Siren', and more. Accompanied by her crew of dancers, Sunmi's releases always come with spectacular performances that stay in the minds of future generations to come. In particular, her 2017 single, 'Gashina', went viral in South Korea as many made covers of her iconic 'gun' move on various social media platforms.

As her first release since departing from JYP Entertainment and Wonder Girls, Sunmi proved herself a force to be reckoned with 'Gashina' as it debuted at number 3 on the US World Digital Song Sales.

Known for breaking stereotypes in K-pop, 2NE1 took the world by storm when they debuted, becoming one of the leading figures of the Hallyu Wave in the early 2000s. Their 2011 single, 'I Am The Best', along with their performance, was praised by music journalists for being an iconic symbol of the 'girl crush' image.

Fierce and strong onstage, 'I Am The Best' revolved around themes of female empowerment reflected in the dance. The easy-to-follow steps are what makes the choreography stand out, turning it into an instantly iconic dance for many to follow.

With numerous iconic songs under TWICE's impressive top hits list such as 'Cheer Up', 'TT', 'Signal', 'Dance The Night Away', and more, 'Fancy' has gotten the nod from most members on being their hardest dance to date.

Aside from being an earworm, the dance track has an equally energetic dance to match, with minor movements that are hard to execute seamlessly while singing—but the members do it flawlessly. With the signature 'Fancy' chorus moves, the dance has seen a plethora of dance covers pop up on TikTok, Instagram, YouTube, and more, becoming one of the dances to define its era.

OH MY GIRL dominated the charts with 'Nonstop' in 2020, setting the record as the longest-running girl group song on Melon Daily Chart Top 100 with 480 days, and was only dethroned by the B-side track of the same album, 'Dolphin'.

Many would say this era was a turning point for OH MY GIRL, who showed a fresh change from their sweet concept previously. The choreography shows the charisma of the members and expresses the determination of an enthusiastic lover in the midst of the flirting stage. Keeping their feminine side in a dance that rides on the fast beat of the song, the choreography expresses the push-and-pull one feels while chasing someone.

Released as a part of their double single debut, BLACKPINK's 'Whistle' incorporates hip-hop basics with a groove that makes for a performance full of charisma and allure that cemented BLACKPINK as monster rookies in their debut year.

Now, five years later and global superstars, the quartet still names 'Whistle' as one of their hardest dances. With many isolations and groove techniques embedded into it, the members claim that this dance is their hardest song yet, unbeknownst to many. BLACKPINK infuse their own individual charms into the performance, elevating the choreography's subtle points and highlights.

Today, the song still gets people breaking into the choreographed steps as it plays, proving its influence that makes it one of the most iconic dances in K-pop today.

If any group can make a large formation work, it's WJSN. The 13-member group's 9th mini-album, Unnatural, released last March, is a catchy dance-pop tune that sticks to the mind once heard. Utilizing the movement of their hips, the members perform the choreography with their feminine style, accentuating the beats as they sway to the song.

Imitating the movement of a mannequin dolls' wooden arms, the chorus step is an ingenious move that communicates the feeling of being 'unnatural', gracefully. Executed elegantly by the members, the moves express the tracks' story of a girl awkward in love effectively and beautifully.

(G)I-DLE's debut with the lead single 'Latata' was all the buzz when it dropped in 2018. Debuting at number 7 and peaking at number 5 on Billboard's World Albums chart, their debut EP, I Am, swept the world with their unique sound and style.

Leader Soyeon worked on the production of the track herself, making them one of the rare few idol girl groups to have produced their own tracks. The choreography did not disappoint as well. With elements of Latin dance steps combined with girls' street style, the choreography is simultaneously strong and softly feminine, making the perfect balance that complements the beats of the track.

'Latata' also charted on the Gaon Digital Chart a week after release, and the group made their debut on Billboard's Social 50 Chart at number 36, proving their prowess as rookies.

Dancing Queen Chung Ha has continuously put out spectacular music and performances. Once a dancer herself, she works closely with her team of dancers and choreography team, South Korean all-female dance crew LACHICA, to make the choreography to her tracks.

From voguing and waacking to street jazz, Chung Ha executes all the moves with finesse, especially in her 2019 single, 'Gotta go', which was a shift to a darker style from her 'girl crush' concept in her previous releases. The mature new sound also came with a heavier dance style that Chung Ha took in her stride, making it one of the dances we would remember years from now.

Aside from being intricate, the choreography also has elaborate formations that make use of all the dancers in a complementary way, highlighting them alongside Chung Ha to create beautiful images on stage.

When the first verse of ITZY's 'Wannabe' begins, we can't help but jump into Ryujin's iconic "shoulder dance", which went viral on social media along with the song. A song about self-love, the group has become an icon for female empowerment, making them a group meant to be loved for generations.

ITZY are known for their powerful performances, and 'Wannabe' stands near the top of the list of challenging dances that K-pop fans have come to know and recognise instantly. Comparable to boy group dances, the dance is an intense number that leaves you speechless, wondering how the members sing stably through all the movement. Not only has the dance gone viral among fans, the dance has also been covered by numerous idols, comedians, entertainers, athletes, and more.

Last but not least, we have monster rookies, NMIXX, who went viral on TikTok for their debut EP, AD MARE, and their spectacular performances on live stages. Equipped with a fresh sound and impeccable dance skills, the group is sure to follow in the footsteps of their company mates TWICE and ITZY, creating their own brand of the 'girl crush' concept.

Like most K-pop releases, 'O.O' has its own signature dance move that stands out in a cute way, incorporated into the otherwise intense dance routine. NMIXX recently debuted this February but have already amassed a large fan base, cementing a place for themselves as one of the upcoming girl groups of the fourth generation, sure to become icons to future generations.