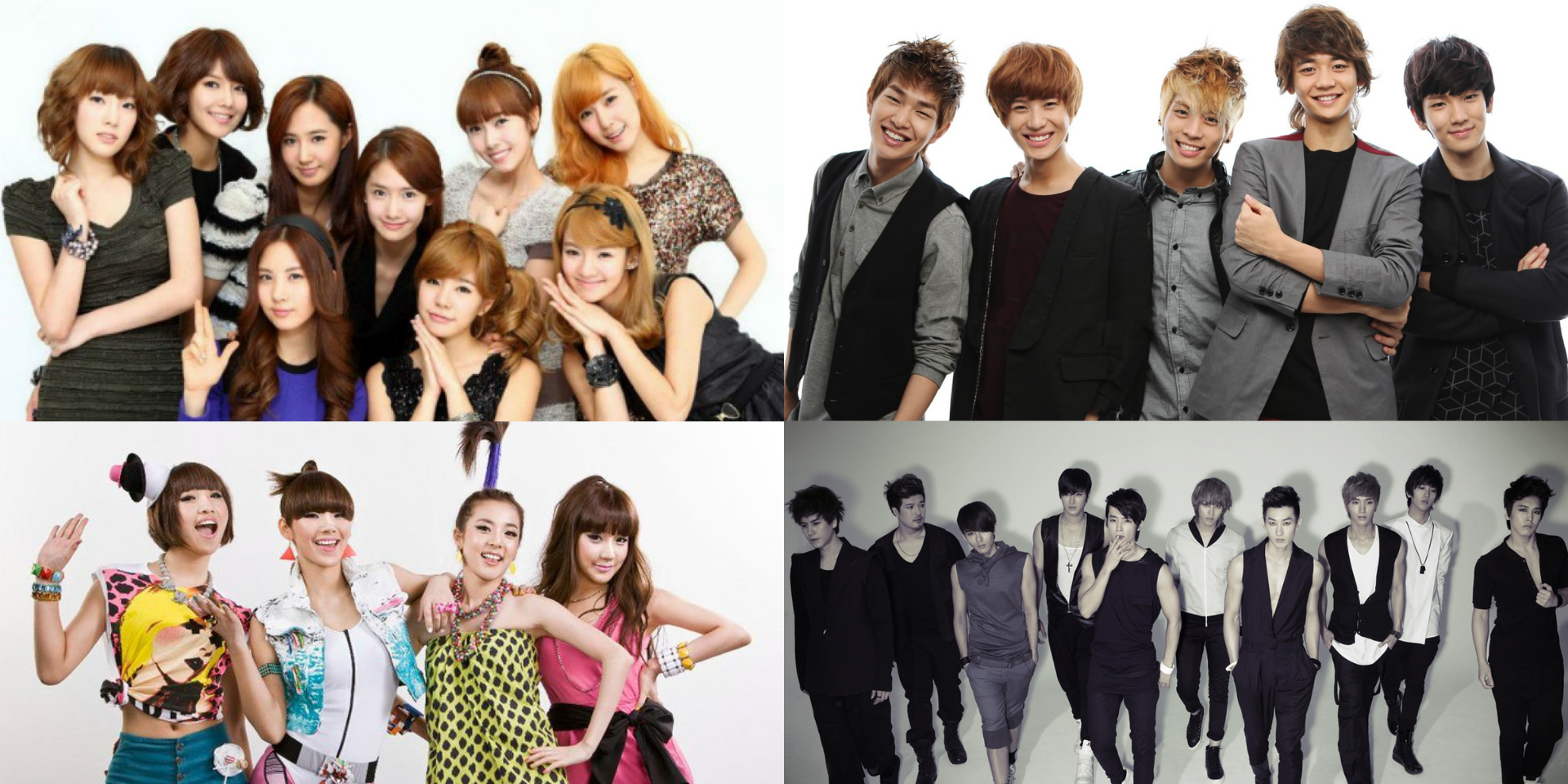 Around 2004 to 2010, a specific group of K-pop idols entered the scene. These acts were responsible for bringing the Hallyu wave abroad, and were the first to experience a taste of the widespread K-pop fever today. This was when addictive tracks, showstopping choreographies, and an unrivaled sense of style became the blueprint for the industry.

In Bandwagon's second part of the K-pop generation series, we highlight the notable acts of the second generation who left a lasting impression on fans during those years. From SHINee to 2NE1, here are the idols that we know and love from the earlier days of K-pop. Arguably one of the most iconic K-pop idols even to this day, there's no way we could exclude Girls' Generation from this list. Made up of 9 members, the girl group also known as SNSD (short for So Nyuh Shi Dae) was formed in 2007. They blew up with the song 'Gee' in 2009, where it seemed like almost everyone knew the choreography by heart.

Other songs that did spectacularly well include 'Genie' and 'Run Devil Run'. The girl group was also one of the first to attempt breaking into the American music industry by making appearances on American talk shows such as The Late Show With David Letterman in 2013.

In 2014, the group became an eight-member act when member Jessica left, citing schedule conflicts as a reason. They went on hiatus in 2017, with several of the members including Taeyeon and Hyoyeon going on to make a name for themselves as solo artists. While there has been recent speculation that they might be making a comeback, nothing is set in stone yet. Super Junior's 'Sorry, Sorry' was one of the earworms for 2009, with the song blasting on speakers everywhere. Debuting in 2005, the group was originally made up of twelve different members.

They won numerous awards over the years, including "International Artist" at America's Teen Choice Awards. The act also garnered attention globally, having toured in cities such as London and Paris. Super Junior have numerous hit songs under their belt, with 'Mr Simple' and 'Sexy, Free & Single' also faring extremely well with audiences.

The group is still active as of today with nine members remaining. Their latest record was released earlier this year – a Japanese album titled Star. After Jessica Jung rose to fame in Girls' Generation, fans were introduced to her sister, Krystal Jung, in f(x). A five-member act that defied the typical bubblegum-pop stereotype of K-pop girl groups, f(x) were not afraid of crossing boundaries. From wilder outfits to bleached hairstyles, they leaned toward a more electropop sound which was rare during the time. Their debut single, 'La Cha Ta' also performed well for a debut track, garnering more than 19 million views on YouTube.

Their 2011 single 'Hot Summer' was also one of the biggest songs of the year. Their last release was in 2015 before they went on hiatus in 2016. TVXQ are dubbed the "Kings of K-pop" for good reason. Originally debuting as a quintet, the group was one of the earliest acts of the second generation. TVXQ comprised members Yunho, Changmin, Jaejoong, Yoochun, and Junsu. While they weren't met with immediate success, it was their album Rising Sun that launched them into stardom. The title track of the same name was also one of their most impactful signature songs. Their 2008 song 'Mirotic' also became an international hit.

With Junsu, Yoochun, and Jaejoong leaving the group, TVXQ continued as a duo made up of Yunho and Changmin. Their last album was released in late 2018, titled New Chapter #2: The Truth Of Love. INFINITE's story is truly a remarkable one. Initially struggling to make it in the scene, the group did not gain much traction with their debut releases. In fact, it was only until the unveiling of their second EP that they managed to break into the industry. Their single from the album, 'BTD', was what led the group to enter the Music Bank charts for the very first time.

More achievements followed, including their track 'The Chaser' being named the number one K-pop song of the year in 2012 by Billboard. They also embarked on a world tour across 22 countries a year later.

While the group has not yet disbanded, their last release was an album titled Top Seed in 2018. Several members went on to end their contracts, while others were enlisted in the military. "I want nobody, nobody but you" – an iconic line that will live on in the minds of anyone who heard the Wonder Girls' viral hit, 'Nobody'. One of the first K-pop acts to achieve internet virality with a single track, the JYP Entertainment group first made their debut in 2007 with 'Tell Me'. While the song performed well, it was nowhere near how 'Nobody' fared. The track made the five-member group the first South Korean act to enter the Billboard Hot 100 Chart, and they were even picked to open for American band the Jonas Brothers on their world tour.

The group is known for including elements of reggae and R&B in their sound, setting them apart from other K-pop acts in the scene. They disbanded in 2017 after the release of the song 'Draw Me', 10 years after their debut. Dubbed K-pop's "beast idols", 2PM was one of the biggest boybands of the second generation. Rather than conforming to the pretty-boy look that most K-pop boybands adopted, their image leaned more towards a mature masculine appearance. They originally made their debut as a seven-member act, but leader Jaebeom left after a series of controversies in 2010. Their release 'Again & Again' was what catapulted their success, with the track winning Song Of The Year at KBS' Music Festival in late 2009.

In 2017, they took a hiatus as the members were enlisted in the military. To the joy of the Hottest (2PM's fans), the act made a strong comeback this year with the album Must, which peaked at number three on Korea's Gaon Weekly Chart. Way before BIGBANG became BIGBANG, each of the members had already begun their venture into the K-pop scene. G-Dragon and Taeyang had already been training under their label, YG Entertainment in their youth. T.O.P. was also an underground rapper prior to BIGBANG's debut. They are well-loved for their outstanding live performances and exceptional choreographies.

K-pop fans will remember their greatest hits including 'FANTASTIC BABY', 'BANGBANGBANG', and 'LOSER'.

The group have a total of five Korean studio albums and three Japanese albums under their belt, and have been accorded numerous awards including being the only South Korean act to take home an award for Best Artist From The World at the MTV Italian Music Awards. 2NE1 made their entrance into the scene with none other than BIGBANG. Their first single 'Lollipop' was a collaboration with the 'LOSER' act, and was followed by the breakout track 'Fire'. The music video for the song garnered more than a million views within twenty-four hours. Edgy and loud, the act made a name for themselves with their style, sound, and image.

In 2010, they released their first album To Anyone which took the seventh spot on the Billboard World Albums Chart. They were one of the first K-pop acts to achieve global success, taking their tour to numerous countries and collaborating with artists such as American singer will.i.am.

2NE1 went into hiatus in 2015, with Bom, Dara, CL, and Minzy continuing to pursue their careers as solo artists. One of the most legendary boybands in K-pop history, SHINee are also adoringly referred to as the "Princes of K-pop". They made their debut in 2008 under SM Entertainment with their hit single 'Replay'.

Their subsequent singles 'Ring Ding Dong' and 'Lucifer' were also popular hits among K-pop fans, with the group making waves both locally and abroad. They were also the first Asian artists to perform at the iconic Abbey Road Studios in London for their Japanese debut in 2011. In 2017, the group tragically lost vocalist Jonghyun.

The band is still active to this day, with their latest release being a Japanese EP released this year titled SUPERSTAR. Each member has also gone on to pursue their respective solo careers. Fans may know Bae Suzy from popular K-dramas such as Start-Up and Vagabond, but she was known for being a member of K-pop group Miss A before she made her venture into acting. Known for their captivating songs and charming personalities, the group was a popular act of K-pop's second generation.

The quartet entered the scene in 2010 with a single titled 'Bad Girl Good Girl'. It was a smash hit, immediately topping Korea's Gaon Music Chart – rare for an act's debut single.

Their first full-length album was also well-received, landing at number nine on the Gaon chart. Its success prompted them to release a Chinese version of the record, which also did well.

In 2017, the girl group officially announced their disbandment. After School made their debut in 2009 with their single 'Ah!', a song that immediately grew on listeners with its addictive chorus. They made a name for themselves because of their unique "school" concept, where members could "join" and "graduate" from the group anytime. Over the years, members left and new members joined. However, fans were not disappointed with each change in the group lineup.

Be it the catchy track 'Because Of You' or the upbeat anthem 'DIVA', they never failed to disappoint with their songs. However, as more members begin to "graduate", After School slowly began to lose their significance. Their last release was a 2014 track titled 'Week'. Were you a fan of K-pop during the second generation if you didn't listen to T-ara's 'Roly Poly'? The five-member act was known for their charming personalities and insanely catchy dance-pop tracks. Making their debut in 2009, their first album did well, but it was 'Roly Poly' that catapulted them to success. The track was everywhere, and even took the number one spot as the best-selling song of 2011.

Other notable hits from the group include 'Sexy Love' and 'Day By Day'.

While the group went on hiatus in 2018 after members Hyomin, Jiyeon, Eunjung, and Qri chose not to renew their contracts, they recently announced that they would be making a comeback by the end of this year. SISTAR was a quartet established by Starship Entertainment in 2010. Their upbeat debut single 'Push Push' was well-received, and they followed it up with tracks 'Shady Girl' and 'How Dare You'. It was their 2011 track 'So Cool' that established their place in the K-pop scene, with the song topping the charts for Billboard Korea's Hot 100 Chart.

A sub-unit comprising members Bora and Hyorin was also formed in 2011, named Sistar19.

In 2016, the group was even given the opportunity to star in the popular adult animated series, Family Guy. After seven years in the scene, it was officially announced that SISTAR would disband in 2017.