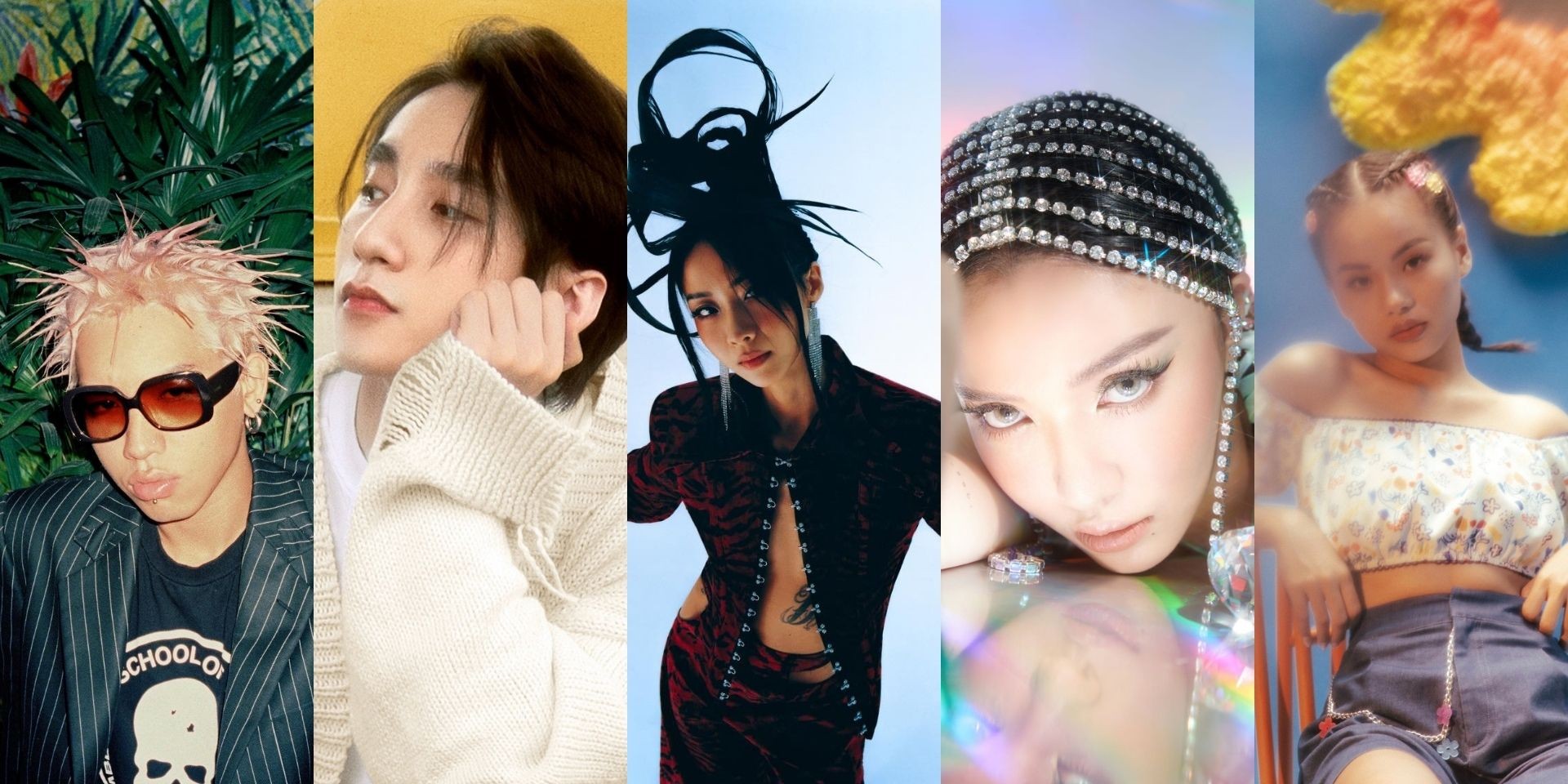 Vietnamese music is thriving more than ever. Steeped in a rich history of classical musical traditions and facilitated by the development of popular music post-Vietnam War, it encompasses a diverse variety of genres and artists, with Hanoi and Saigon becoming the cultural epicentres of today.

Contemporary global flows have also accelerated cultural borrowing of all kinds—from K-pop's pristine production to trendy lo-fi aesthetics of Western hip-hop—resulting in a soundscape that’s highly varied and complex. The international appeal of Vietnamese music has only increased over the past decade, with artists like Suboi and Sơn Tùng M-TP putting their names on the world map.

If you’re looking to dive into Vietnamese music but don’t know where to begin, Bandwagon has got you covered. Ranging from hip hop to V-pop and indie rock, here’s a rundown of 9 artists for your essential listening.

Not many can claim to have rapped before former US president Barack Obama, but Suboi is one of the few artists with bragging rights. Arguably the biggest female hip-hop artist in Vietnam, the fiery rapper came to mainstream prominence in 2009 after featuring on popstar Hồ Ngọc Hà’s chart-toppers ‘My Apology’ and ‘Girls’ Night’. She has since released two albums, and her highly anticipated third LP NO-NÊ is due out 15 July.

Known for her hard-hitting bars and authentic portrayals of urban life, Suboi—who raps in both Vietnamese and English—garnered international attention for becoming the first Vietnamese musician to perform at SXSW in 2015. She was also the first Vietnamese artist to release music under 88rising with 2018’s ‘N-SAO?’, further cementing her icon status in the realm of Vietnamese hip hop. She has since continued to collaborate with the collective, releasing ‘Đôi Khi’ alongside French-Vietnamese rapper Nodey in October 2020.

This list would be incomplete without Sơn Tùng M-TP. Dubbed the “Prince of V-pop”, the singer-songwriter and actor—whose real name is Nguyễn Thanh Tùng—debuted in 2011 with the song ‘Cơn Mưa Ngang Qua’, which quickly went viral. Although the V-pop giant was marred by plagiarism controversies earlier in his career, he has bounced back successfully to become one of the best-selling artists in the country today.

Since then, Sơn Tùng M-TP has put out an expansive discography spanning EDM, pop, and R&B. He achieved further international recognition after Snoop Dogg jumped on his reggaeton smash hit ‘Hãy Trao Cho Anh’ in 2019. More impressively, his latest single ‘Muộn Rồi Mà Sao Còn’ was ranked no. 126 on Billboard Global Excl. US in May, making him the first Vietnamese act to enter the chart.

If you’re looking for a Vietnamese main pop girl, Bích Phương is your answer. With immaculately produced dance-pop and campy aesthetics, the award-winning singer is one of the most popular entertainment figures in Vietnam today.

Bích Phương originally gained recognition for her girl-next-door-image in earlier songs like ‘Bao Giờ Lấy Chồng’ and ‘Cớ Sao Giờ Lại Chia Xa’. In 2018, the singer pivoted to a much more mature and sensual sound with ‘Bùa Yêu’, her biggest hit to date. She then released the nu-disco banger ‘Đi Đu Đưa Đi’ in the following year, which trended on TikTok and spawned numerous parodies and remixes. The pop star has also crossed over to R&B, releasing a lush collection of smooth jams with her tâm trạng tan hơi chậm một chút EP in May 2020.

At the forefront of Vietnamese hip-hop is Đen, a rapper who first emerged from the underground scene about 10 years ago. The musician—whose real name is Nguyễn Đức Cường—was a former beach cleaner in Hạ Long who began writing music in his school days. He was propelled to stardom after his song ‘Đưa Nhau Đi Trốn’ featuring singer-songwriter Linh Cáo went viral in 2016, and he has never looked back since.

Today, Đen is one of the biggest Vietnamese artists, with hits like ‘Lối Nhỏ’ and ‘Bài Này Chill Phết’ scoring over 100 million views on YouTube. Testament to his massive popularity, the hip hop icon was the third most-streamed artist of 2020 in Vietnam, according to Spotify. Straddling both the independent and mainstream realms, he has also worked with a diverse range of artists, including veteran pop group MTV for his latest single ‘Trốn Tìm’ and alternative rock band Ngọt.

Vietnamese indie is undergoing a renaissance at the moment, with an explosion of bands that have emerged over the last two decades. Helming this movement would be Ngọt, who’s become one of the biggest names in Vietnamese rock with three albums under their belt.

Established in 2013, Ngọt came out at a time when underground scenes in Saigon and Hanoi experimented with styles of alternative rock that were beginning to take on a distinctly Vietnamese form. Known for songs like ‘Cho’ and ‘Lần Cuối’, Ngọt have come to represent the sounds of Vietnamese indie rock, with a preference for cleaner tones and complex lyricism. The band’s music also incorporates genres like R&B, jazz, and bossa nova, producing an incredibly versatile discography with never a dull moment.

Unlike Ngọt, Chillies lean heavier to the pop side of things. Debuting in 2018 with the single ‘Who?’, the quartet quickly ascended to become one of the most recognisable indie bands in the country, achieving millions of hits on streaming platforms.

Chillies’ music embraces the full spectrum of pop. From the synthwave-infused ‘Giá Như’ to the pop rock balladry of ‘Vùng Ký Ức’ and sun-kissed disco in ‘Cứ Chill Thôi’, the band offers a colourful palette that’s still accessible to a wide audience. Signalling their increasing popularity, the group have signed to Warner Music Vietnam last year and finally released their debut album Qua Khung Cửa Sổ in May.

If there’s one act to look out for in Vietnamese hip-hop, it would be WEAN. Profiled by i-D as one of the most promising creatives shaping Saigon’s youth culture, the rapper and owner of fashion brand LAZYTHINK debuted in 2018 with the broody single ‘She Said’.

Like many singers, Vietnamese R&B artist KIM KUNNI first started out on YouTube in 2017, releasing obscure covers of Lana Del Rey and Radiohead. The bilingual singer-songwriter eventually began releasing music under Saigon-based collective JMG Melancholy, including the singles ‘TIME’ and ‘LULALILO’. These efforts culminated in her debut EP Butterfly, which arrived last November.

With dreamy textures and honeyed vocals à la Raveena, listening to Butterfly makes you feel like you’re floating on a lily-pad. The compact but intimate project teases a promising glimpse of what Vietnamese R&B has to offer, especially for a genre that remains relatively underappreciated in the country. Since the EP’s release, KIM KUNNI has continued to post original songs on her YouTube channel, including the lo-fi track ‘Just The Two Of Us’.

LENA is more prominently known as a popular influencer and actress in her home country, but she’s also made a name as a rising indie artist with various musical projects. The singer and bassist fronts the self-styled “melodic punk” band Lenatic Bubble Gum Hipsters, who debuted in 2019 with ‘Chuyện Tình Trôi Mau’.

Beyond bubblegum punk, LENA has also released music as a solo artist, venturing into pop, R&B, and bossa nova. Her most popular song to date is ‘Ôi tình yêu thật điêu’, a breezy and lovesick indie-pop number that takes cues from the likes of Phum Viphurit and Chillies.