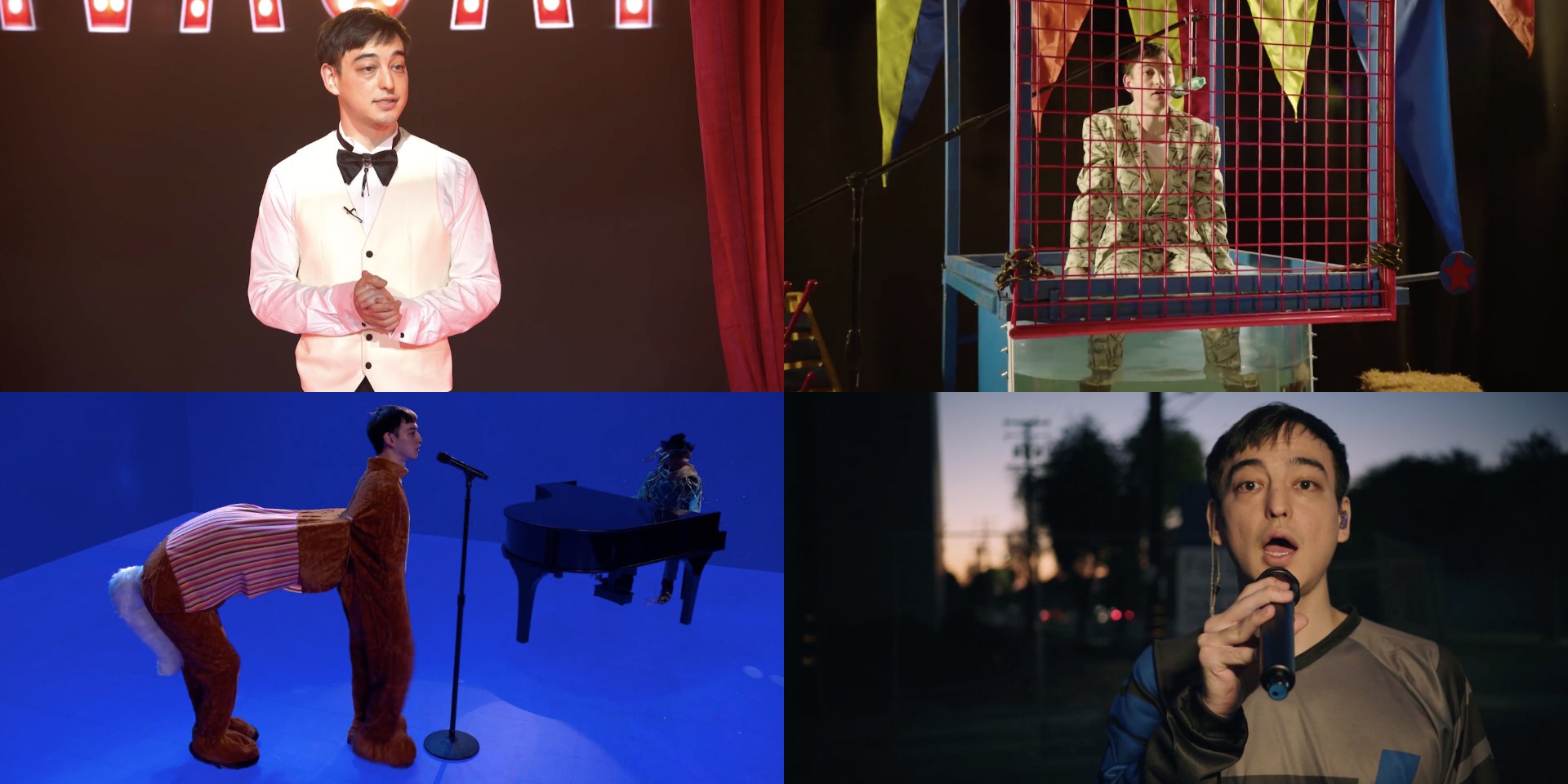 Just when we thought we’ve seen our fair share of virtual shows, Joji is here to reinvent entertainment in this day and age of social distancing with endless tricks up his sleeve.

On Saturday (24 Oct), the 88rising star held his first-ever online concert The Extravaganza since kick-starting his musical career under the label three years ago. Celebrating his artistry, the ticketed show was also self-directed, and entailed over an hour of relentless fun and never-seen-before antics. 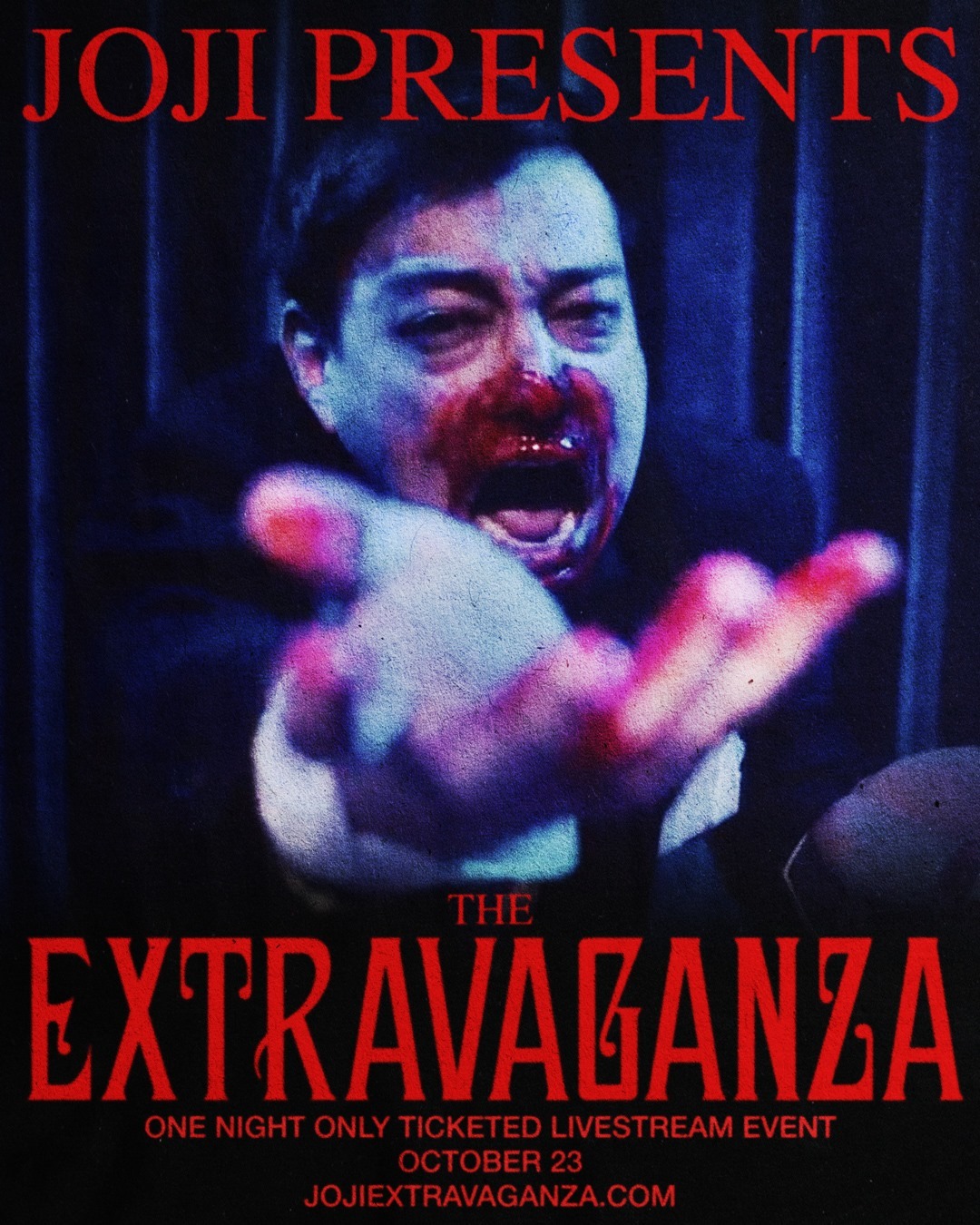 The unique live stream event was broadcast on his website, premiering early in the morning in Southeast Asia. Two reshowings of the event were available in the evening and the wee hours of the next day, accessible via a unique access code. All three sessions were eagerly joined by Joji fans all over the world, from Asia, Australia, to Europe and the Americas.

Thank you for tuning into the #EXTRAVAGANZA premiere!

Featuring a bulk of songs from his sophomore album, Nectar, Joji poured his heart and soul into performances of ‘Upgrade’, ‘Ew’, ‘Like You Do’, and more, intermingled with crowd-favourites from his discography including ‘Attention’, ‘Yeah Right’, and ‘Slow Dancing In The Dark’. 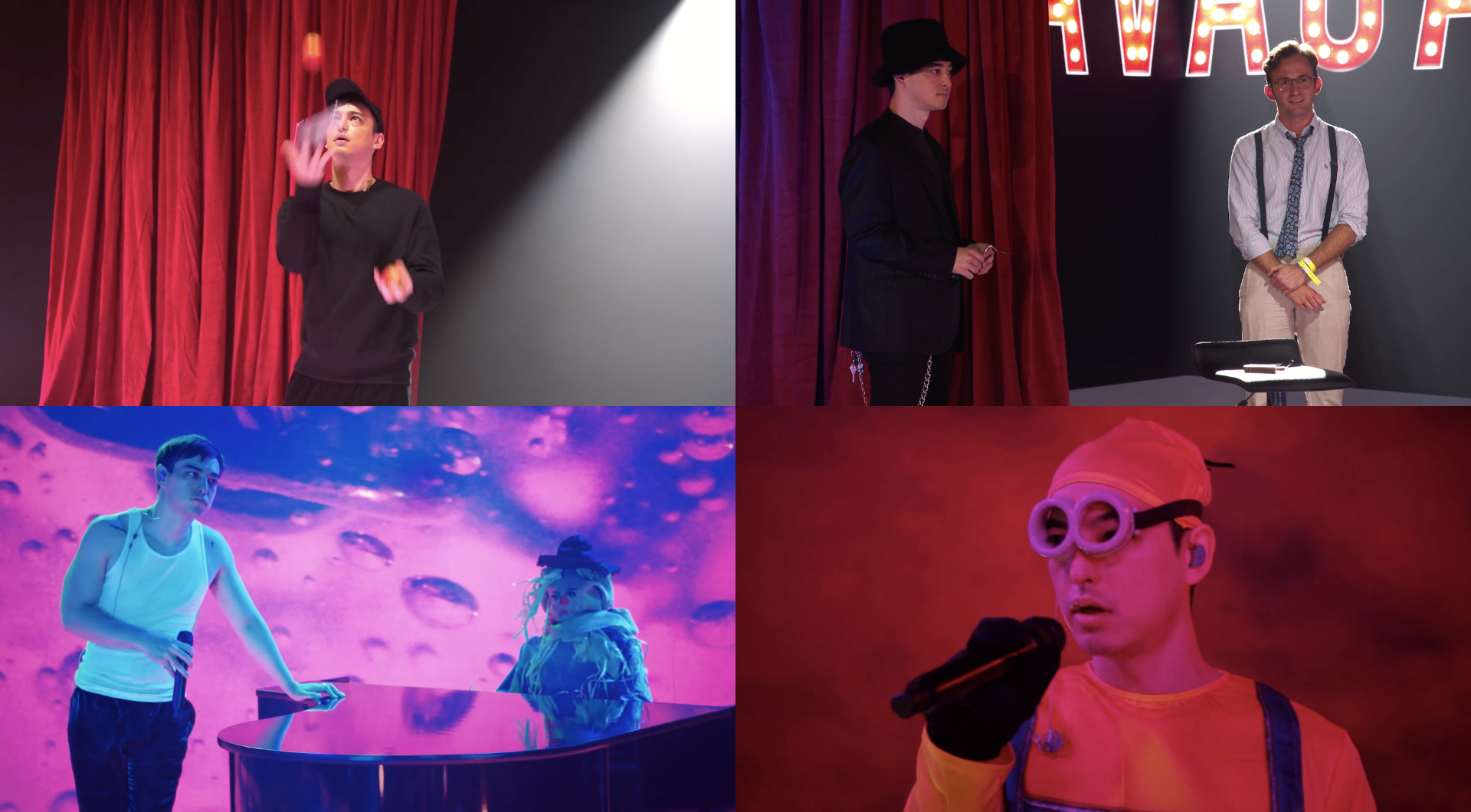 Each performance also flaunted the different aspects of Joji’s personality, ranging from comedic delivery from short skits, singing while caught in precarious scenarios, and soulful serenades clad in a prim-and-proper suit and shades to match.

Opening the show all dressed up to the nines, the singer-songwriter and producer was quick to dive into ‘Sanctuary’, perched atop a dunk tank with various candidates taking turns to take their aim. Moving towards the end of the song, the challenge became unmatched with the appearance of a baseball player – giving Joji just enough time to demonstrate his warm, silky vocals before being plummeted into the water by the second ball. 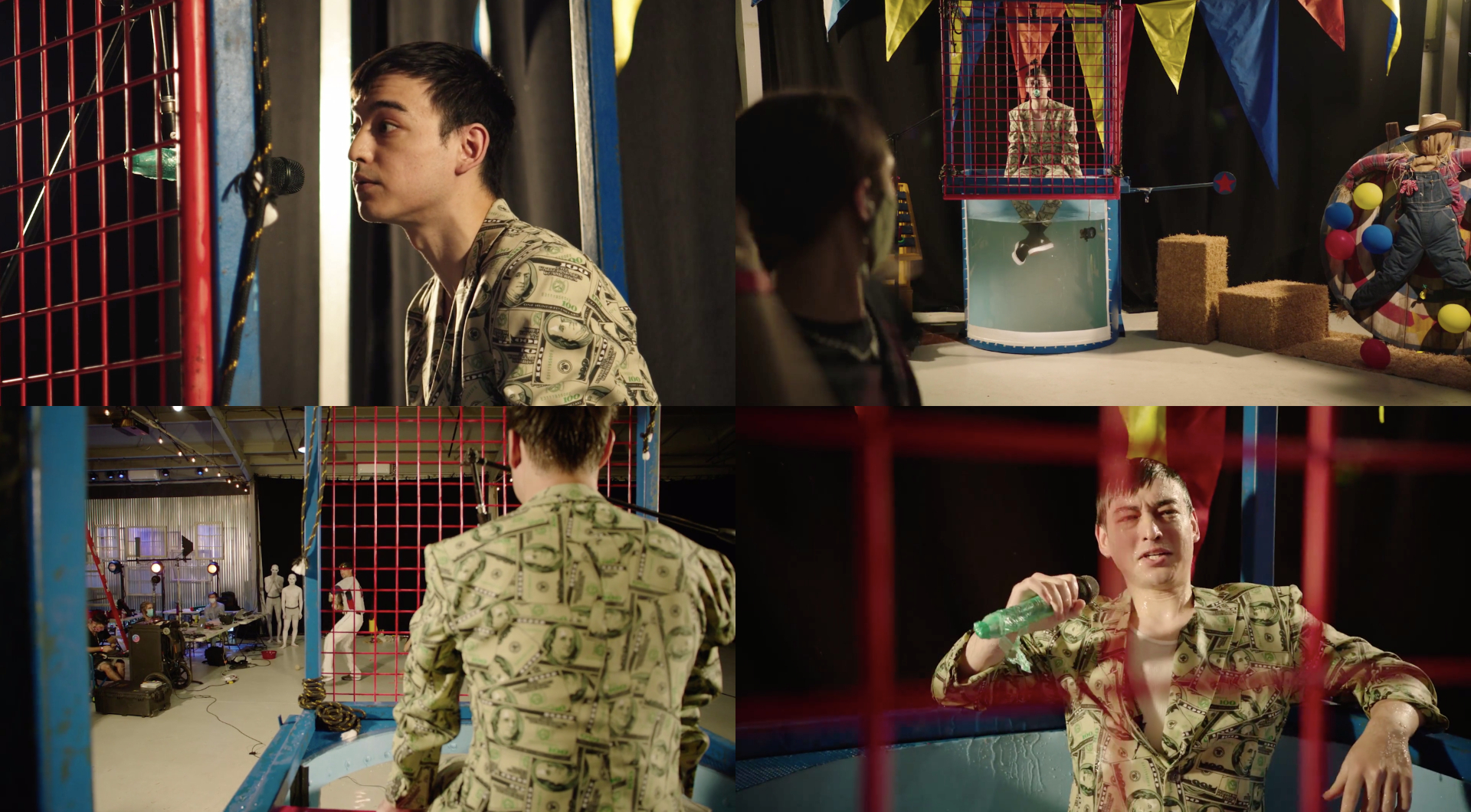 This was followed by an equally amusing performance of ‘Attention’ from his 2018 album BALLADS 1, wherein he gave new meaning to horsing around on the show. While it’s easy to be distracted by the spectacle he had put up, the sound quality of the show was to be reckoned with, blaring the explosive instrumentals one would never skip out on when listening to ‘Attention’. 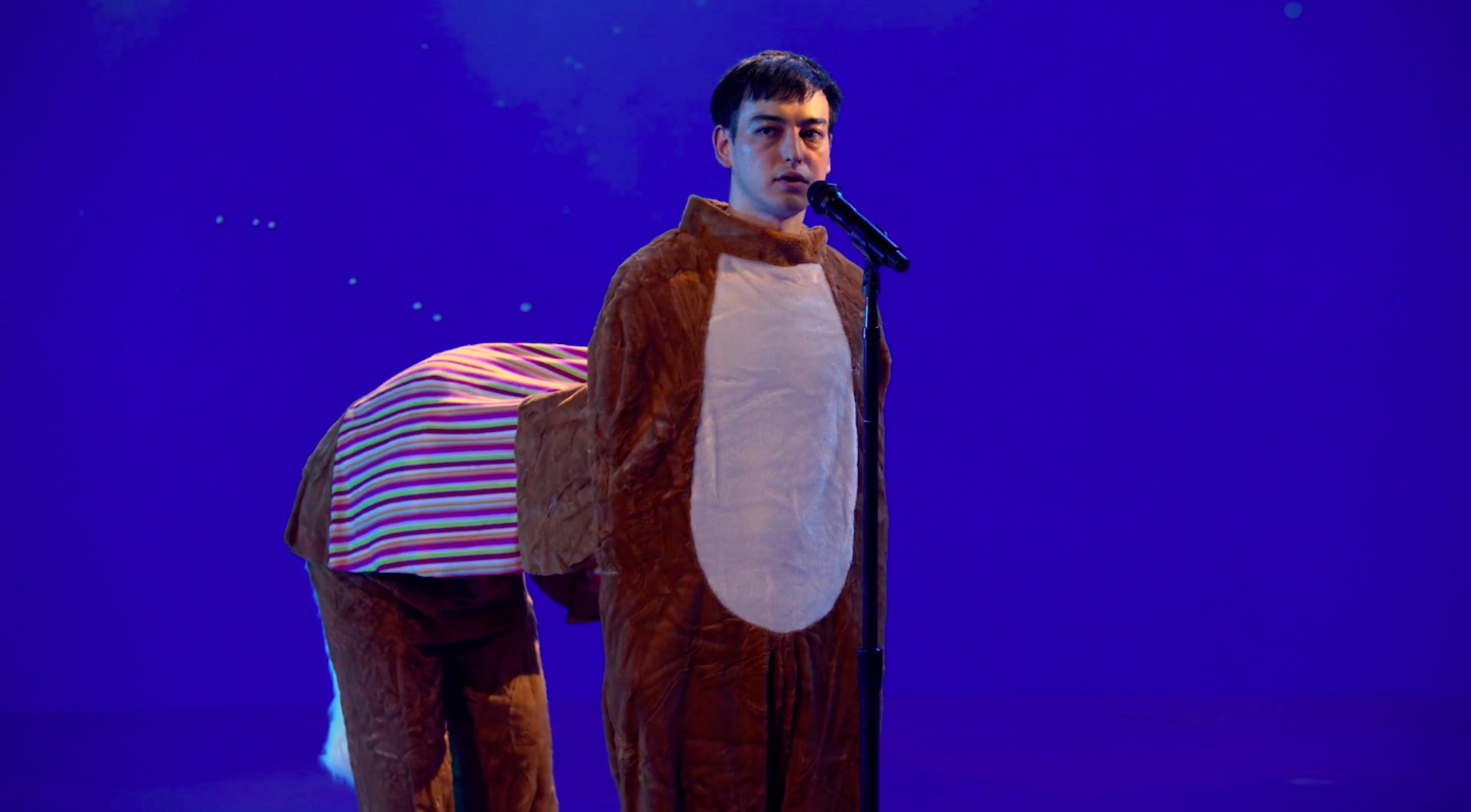 The same goes for dance bop ‘Your Man’, which featured Joji exercising his culinary skills on an omelette, though from afar you could be fooled into thinking it was a DJ set at first glance. 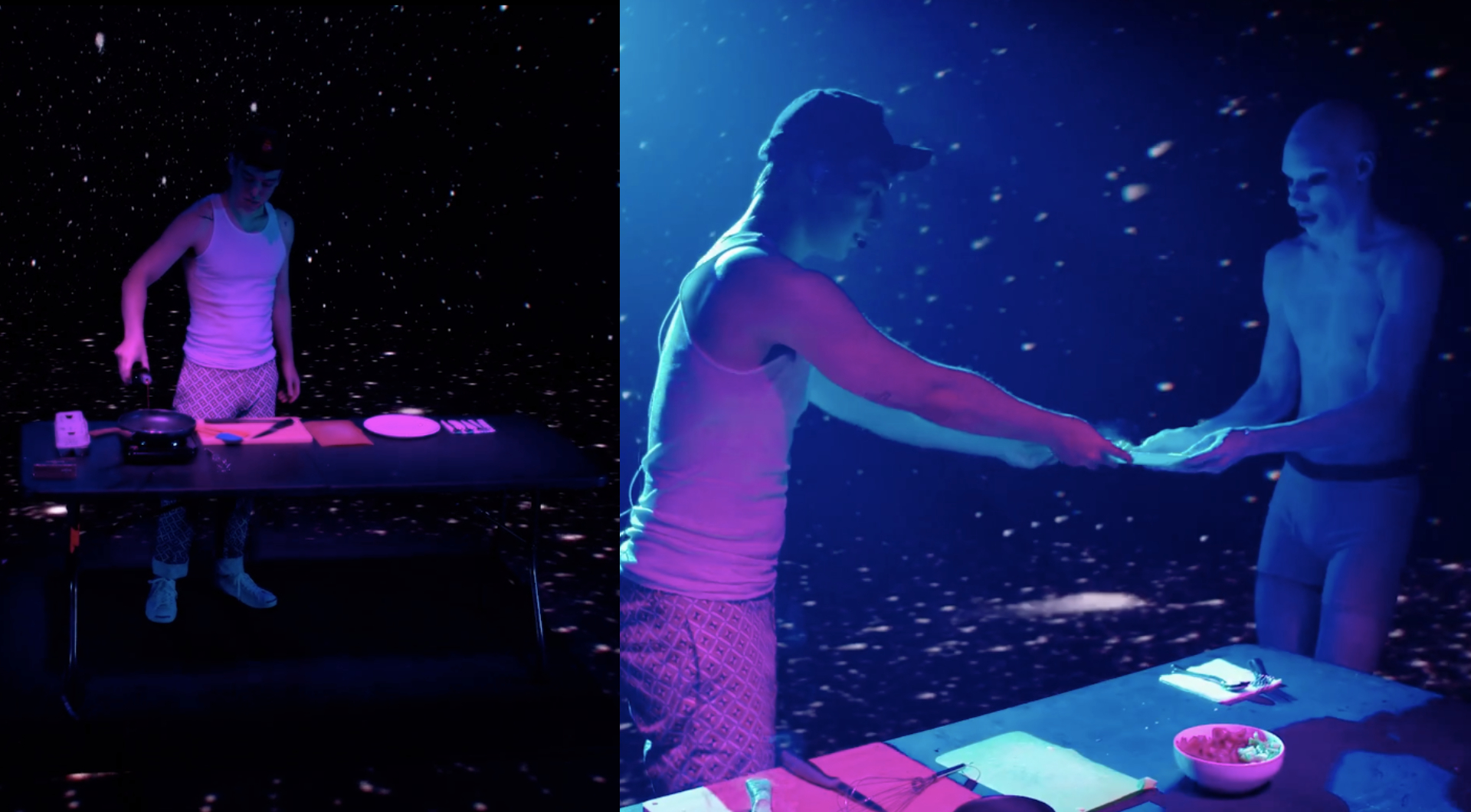 While memorable moments from the show were aplenty, it would be a sin not to mention the physical effort the artist had put into ‘Run’. With a concept like the imaginative game we fondly recall as ‘the floor is lava’, Joji (in a tux) swung from tyre to tyre, bar to bar, before landing himself on a treadmill that only increased with speed progressively with the song. 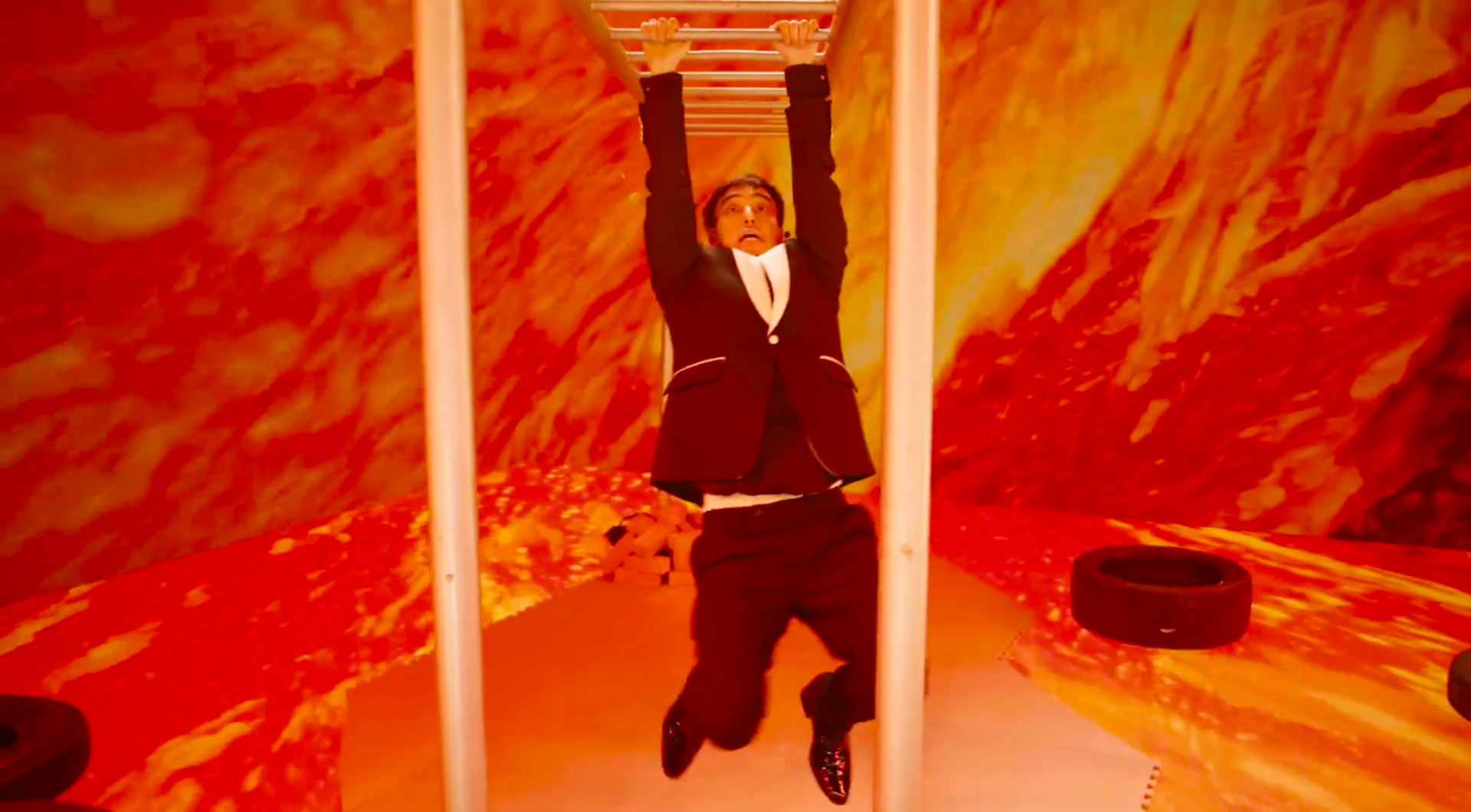 Between panting and strained breathing, with beads of sweat forming on his forehead, he asked comically, “Is someone speeding this up?” – and at the peak of its vigour, “Dude, when does this song end?” – and came the guitar solo, “I have no part in this guitar solo. They just sent it over to some guitarist.”

"I got a box cutter with your name on it": An interview with Joji

But striking presentations aside, the natural entertainer had shown his capabilities in offering profound and poignant performances to the depth of his emotional tunes. Courtesy of his scarecrow pianist, Joji delivered ‘Like You Do’ with rising intensity, as it gradually picked up from soft piano keys with a simple drumming pattern, before welcoming guitar chords for a full and powerful live take.

Songs including the likes of his hit ‘Slow Dancing In The Dark’, the final song of The Extravaganza, also boasted the quality of his voice tweaked to reflect fragility. Donning a bowtie and a soft white blazer, the toned-down, almost acoustic version of the original was a simple but moving show of genuity characteristic of Joji. 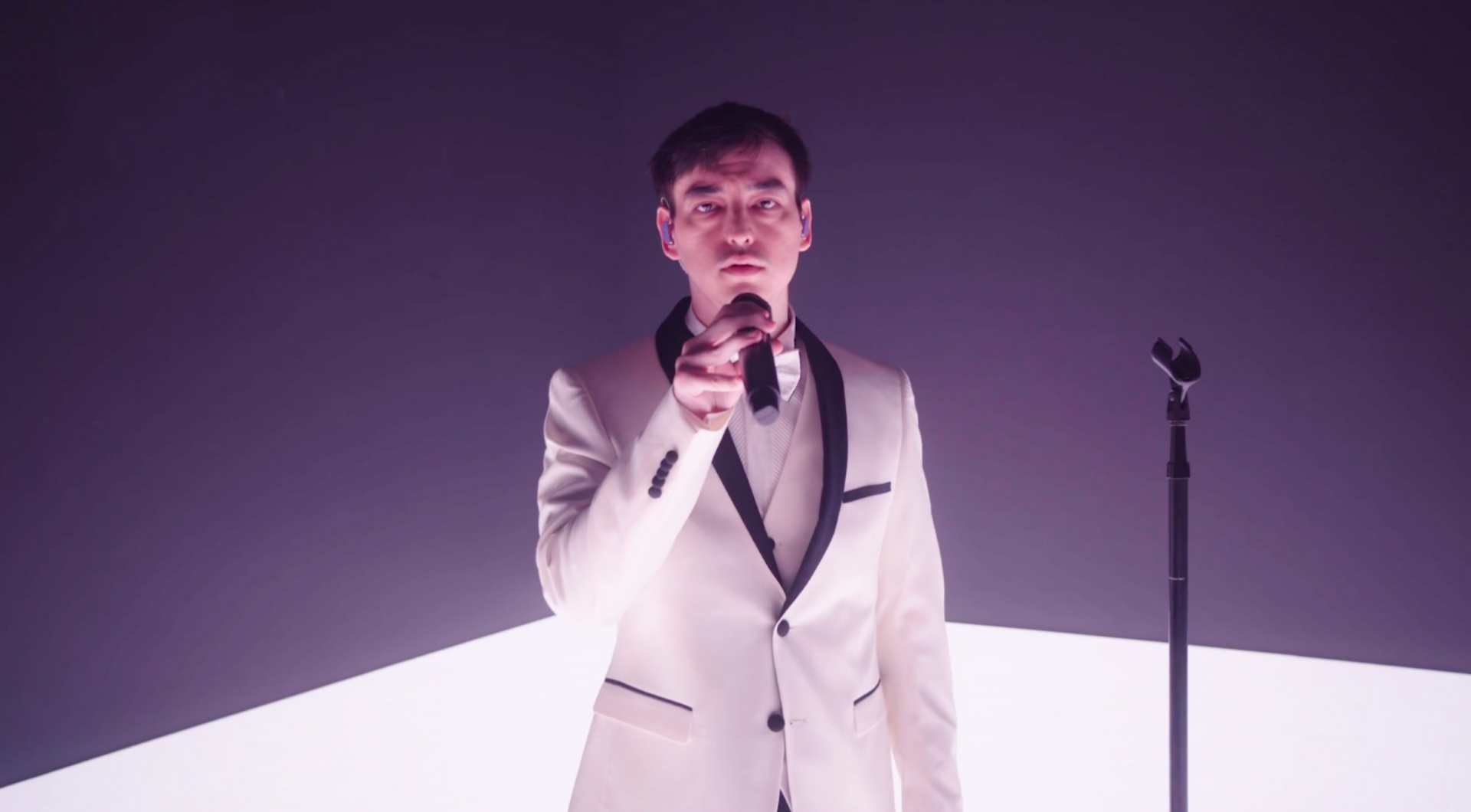 On the other hand, ‘Daylight’ melds the two elements, an alternative track that borrows an almost industrial sound to its melody. Cast in grayish and blue tones, the performance was undoubtedly serious until it is interrupted with a talent walking in, to which Joji repeats “We can’t afford you” before ushering him offstage. 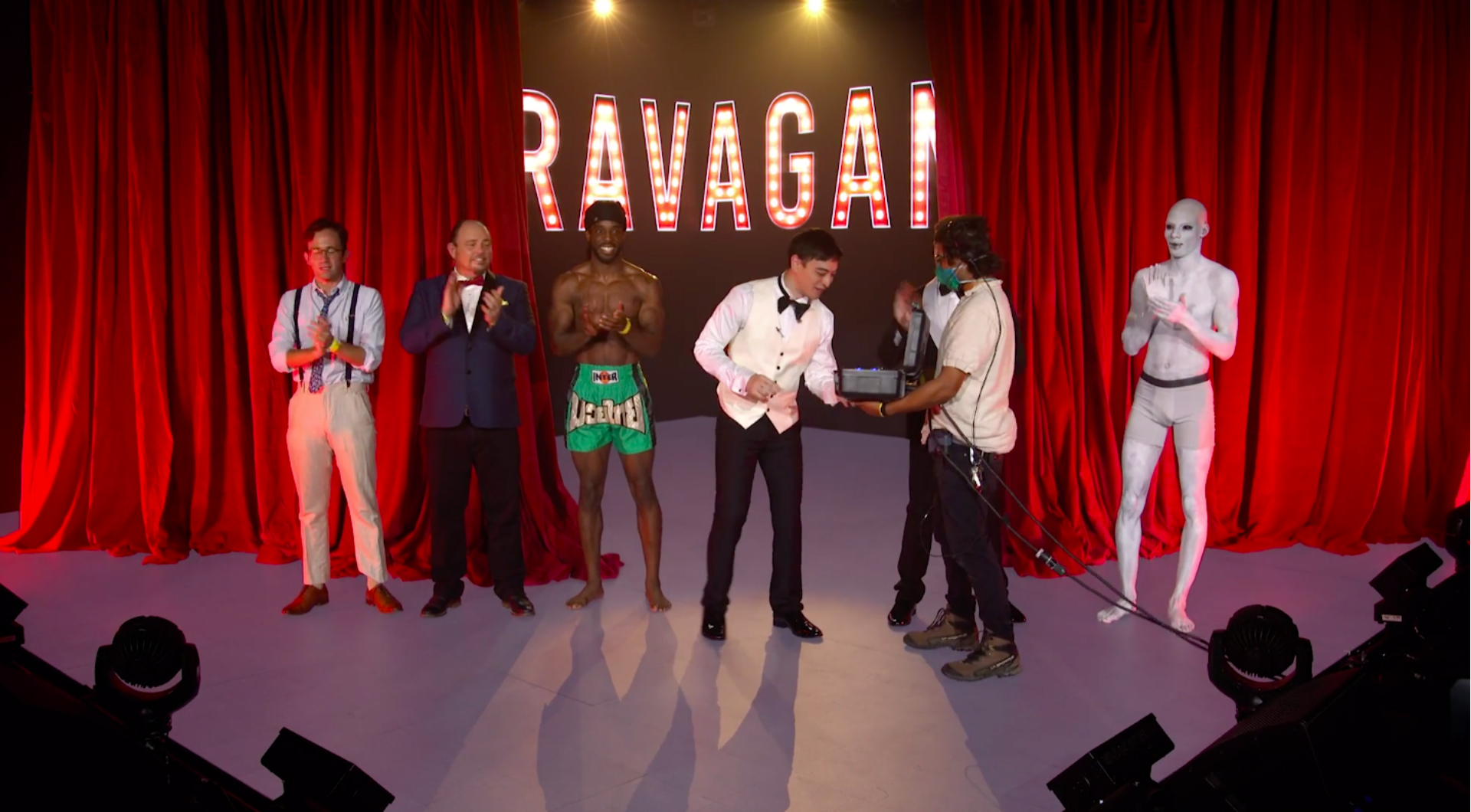 This was in line with multiple segments dividing the setlist, showcasing Joji as a judge entertained by magic tricks, relishing the audience with his signature deadpan humour; gimmicks like juggling, asking for a custom ice sculpture to be chainsawed, and more. Not to mention the shocking end in which Joji drove a knife into the heart of the crew handing him the confetti – before running away and bringing the show to an ambiguous end that left the audience stunned and scratching their heads. 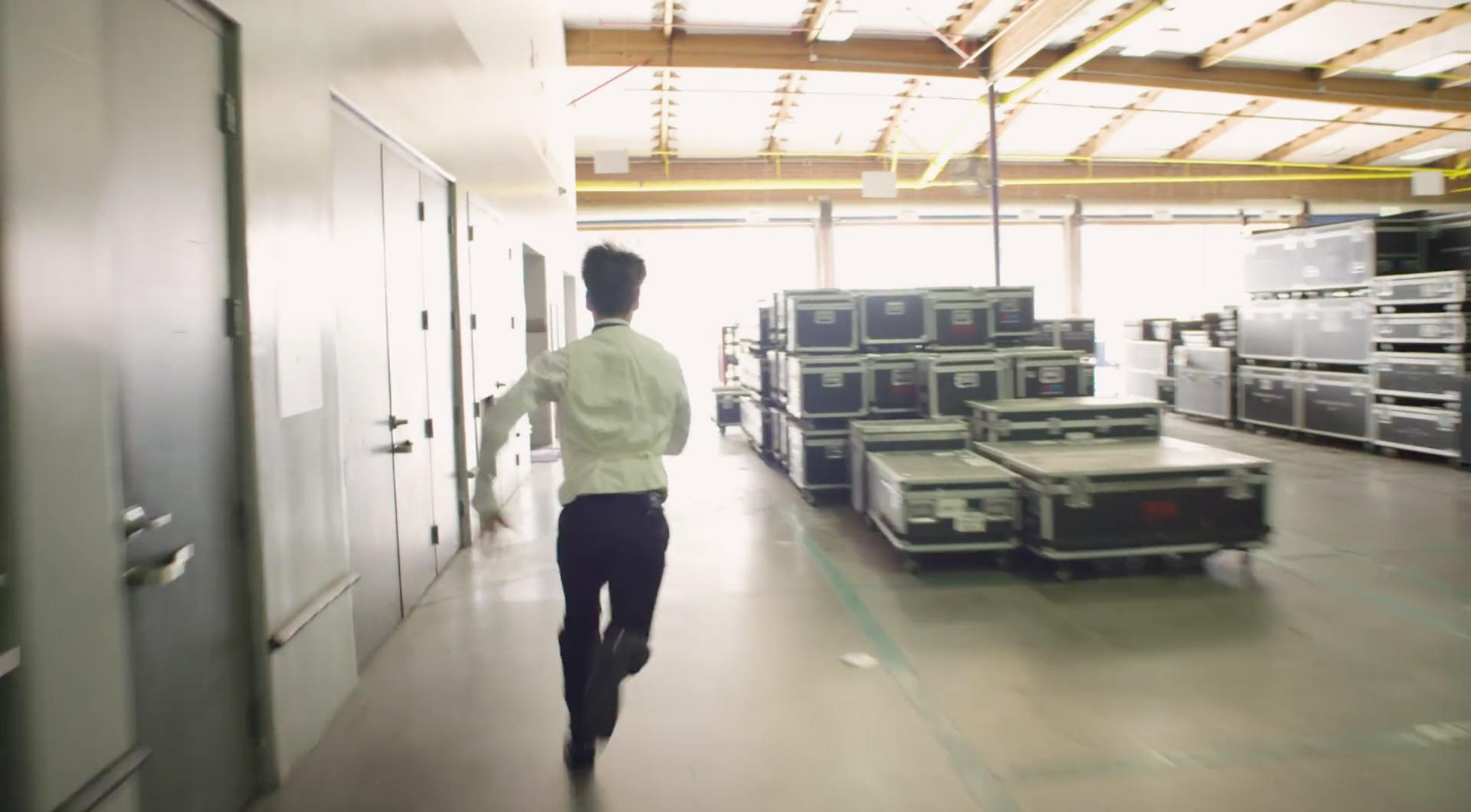 It’s easy, then, to be reminded with The Extravaganza that the singer-songwriter and producer was once a celebrated Internet personality known by the aliases of Filthy Frank and Pink Guy, who brought a different kind of comfort – humour – to those who need it.

Now, Joji is an undeniable force in Asian R&B and hip-hop, relating to his audience with a completely new, and more heartfelt approach – music. But not forgoing engaging his fans on a wider scheme, The Extravaganza draws in both or more sides of Joji that makes him an incomparable, one-of-a-kind content creator and artist – making whatever show he puts up, truly a sight not to be missed.

What a performance.. #Extravaganza pic.twitter.com/WAVMPxf6zS