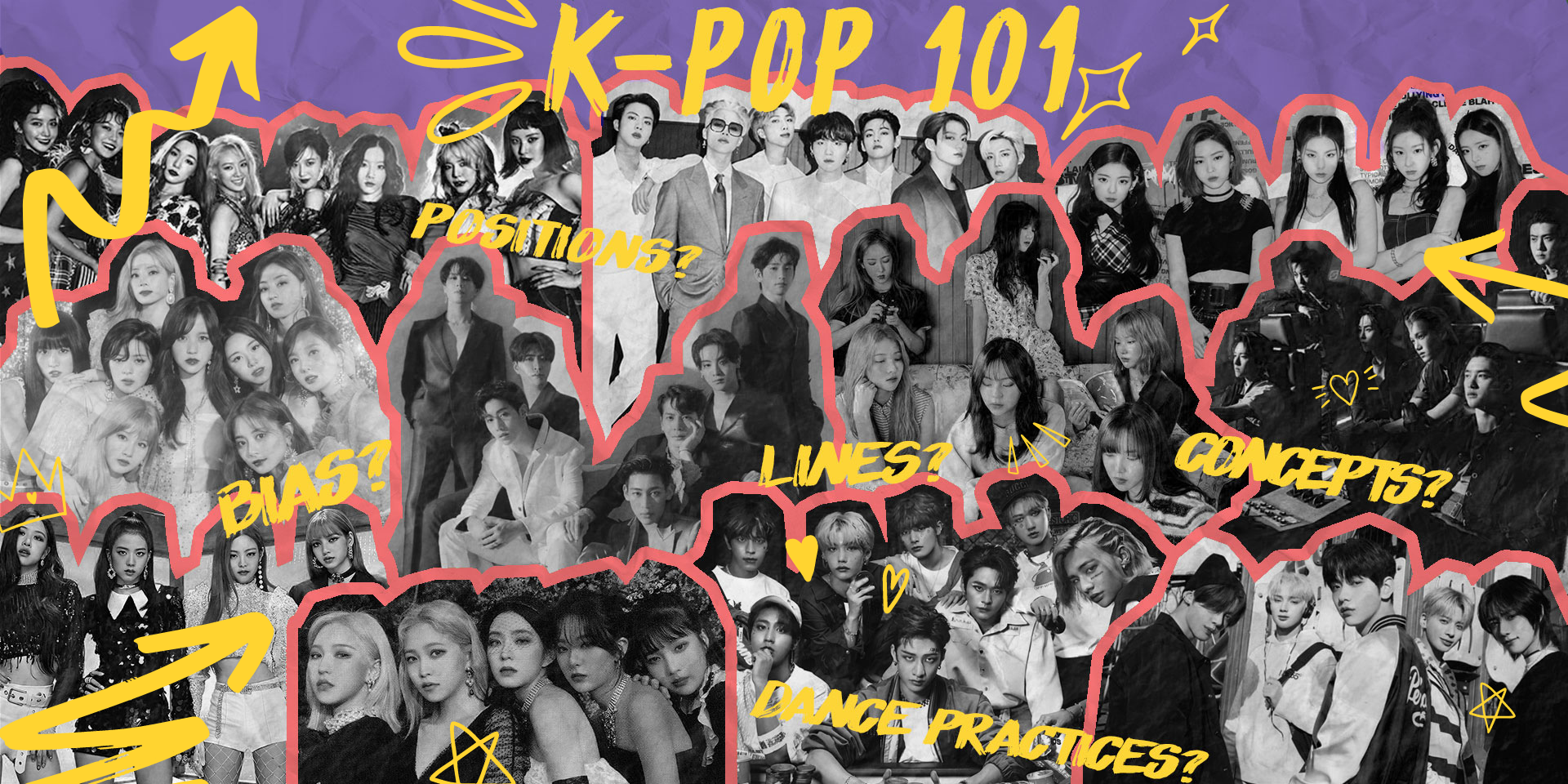 It’s not easy being a K-pop fan.

Whether you’ve recently joined the club or have been stanning groups since Girl Generation’s debut in 2007, you know this is not the easiest subculture of music to get into. With so many moving parts and essential components, being a K-pop fan takes a lot of work – especially if you’re just getting started.

What’s a bias? Where do I get a lightstick? Why are there so many versions of the same song? Who is stan? There are so many questions; we’ve all been there.

So in an attempt to make sense of the wonderful wormhole that is K-pop, we’ve laid out a two-part starter guide to help you on your journey into this (highly addictive) new world.

For the first part, we're giving you the rundown of all the basics you'd need to know as a K-pop fan. From concepts to bias wreckers to dance practices, here's everything to get all the gear you need to start on being a fan.

At first glance, the words – units, lines, and positions would have nothing to do with music but in the realm of K-pop, they’re common facets of being a fan.

While the K-pop industry is riddled with solo artists like IU, Ailee, and Eric Nam, a majority of the acts you see are groups, ranging from four members to even 23 (don’t worry, you’ll learn all their names eventually).

Each group, no matter how big or small, are often divided into different sections or “lines” or “units” with every individual member having a specific role or “position” in the group.

Some common positions in a group include: the leader (usually one of the oldest, they’re in charge of taking care of the group and ensuring that everyone is performing well), the vocalist (could be a main, lead, or even sub-vocal, this is the member that primarily sings), the dancer (similar to the vocalist, the member or members that dance the best and would often lead choreographies), the rapper (okay you get it, the members that rap), the visual (the member that are often considered the most attractive of the group), and maknae (the youngest member of the group). 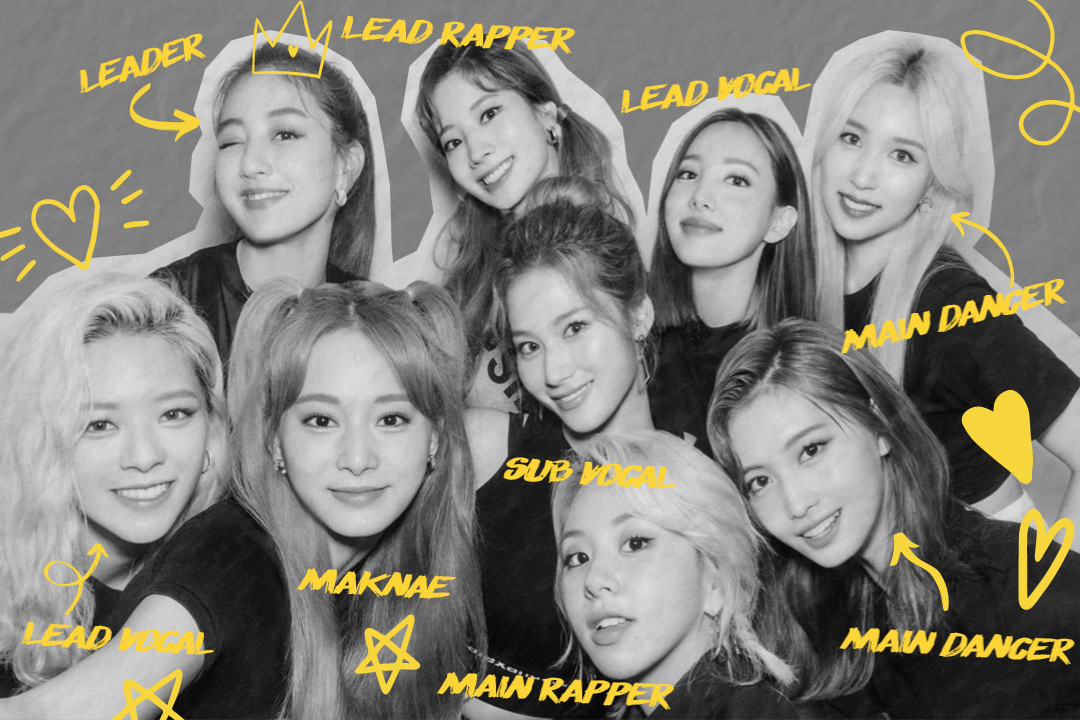 A line consists of members that share a specific attribute. It can be based on something concrete like positions, age, or even last names, or something fan-decided like personality traits, energy levels, and more.

For example, you have BTS’ rap line which comprises RM, SUGA, and j-hope, TWICE’s maknae line which consists Dahyun, Chaeyoung, and Tzuyu, or even SEVENTEEN’s fan-dubbed “sunshine” line which sees Seungkwan, DK, and Hoshi.

Groups can also be divided into units, which are sub-groups that operate and release music under the main group. This includes Red Velvet’s first-ever sub-unit IRENE & SEULGI, or Stray Kids' hip-hop unit 3RACHA which comprises Bang Chan, Changbin, and Han.

Sometimes, sub-units can also consist of K-pop stars from the same agency rather than the same group, like YG Entertainment’s MOBB that comprises iKON’s BOBBY, and WINNER’s Mino or Cube Entertainment's Troublemaker which had BEAST's Hyunseung, and Hyuna. 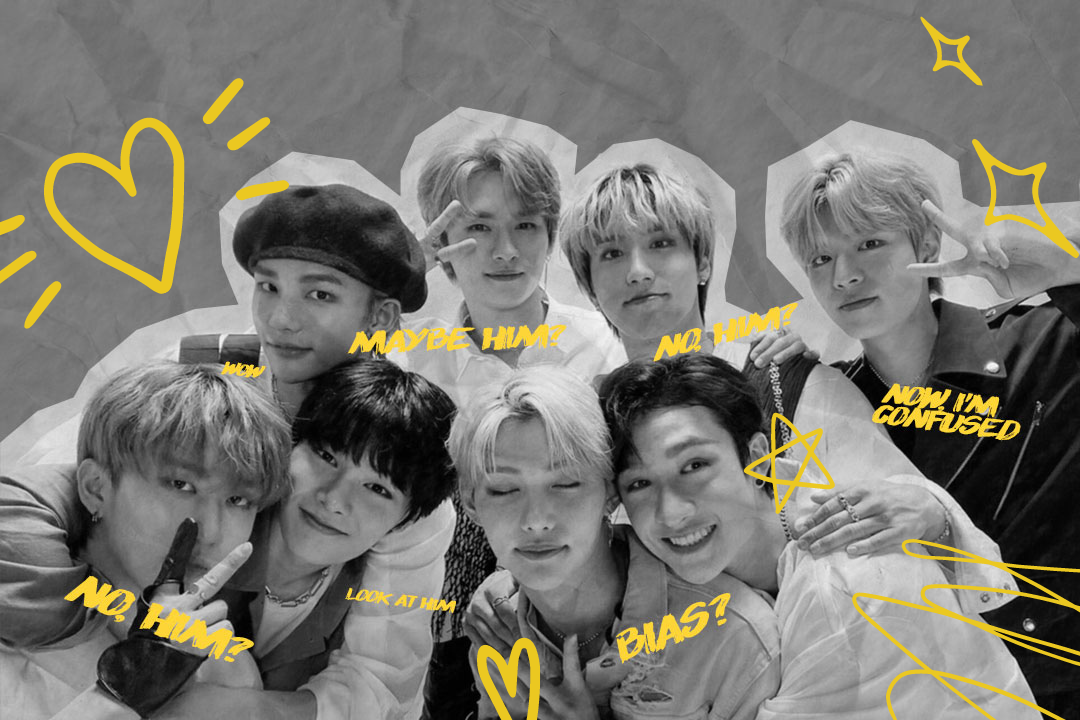 But as you’ll soon come to find out, the role of your bias is never safe because a bias wrecker might just be around the corner. This is usually a member that (completely out of nowhere) grabs your attention and makes you question everything you know and love (i.e your bias).

Most artists would usually drop new music, share it online, and that’s it; but in a world as grand and extravagant as K-pop, it’s much more. Extensive storylines, well-thought-out concepts, and a continuous revolving door of hair colour, K-pop acts introduce a whole new universe with almost every release or “comeback”.

Artists usually take on a new style, sound, and aesthetic or collectively known as “concept” with every album. For the most part, groups won’t change their concept too drastically between each record and usually save their bigger style changes when starting an “era”.

Commonly, especially in recent years, K-pop acts explore bigger themes and storylines within their music accompanied by a specific concept. They tend to break down these large stories into parts by releasing an album or EP series like GFRIEND’s “High School” Trilogy or TOMORROW X TOGETHER’s The Dream Chapter; and once they complete their story, they begin anew and thus a new era.

These new concepts are usually the reason why K-pop idols tend to change their hair often. But all these changes, aesthetic or otherwise, play a significant role in the group’s current concept and the narrative they’re trying to portray.

So hint, if your favourite group is suddenly hiding their hair in their selfies (or often referred to as “selcas”), they’re most likely preparing for a comeback.

JISOO POSTING TB PICTURES CAUSE SHE IS HIDING HER BLONDE HAIR IKTR@BLACKPINK pic.twitter.com/gr1R6SVUzj

The duties and fun of being a K-pop fan all happen when your favourite group finally has a comeback. Unlike a lot of Western acts, every time a K-pop act releases new music, there’s a lot more to it than just a song. Think, a grand celebration.

You’ll first notice a teaser, either posted via Twitter or online fan platforms like Weverse or Fan Cafe (make no mistake, it’s not an actual café). It usually starts with a cryptic image or video with a date.

Consider it the calm before the storm because soon there’ll be teaser images, highlight medleys, video snippets, merch pre-orders, and so much more. Of course, this preludes the most important aspect – the music.

Be it a single album, double album, mini-album, or full album (all of which just indicate the number of songs you get), you’ll notice pretty soon that it’s never just a simple release. On top of the songs and album, there’s almost always a music video (that boasts insane set designs, outfits, and visual effects), as well as an alternate version of that music video, a dance practice video, a different version of that dance practice video, a performance video, and more all roughly released in the same week.

In short, you get a lot of content, even if it’s just one song.

Groups can also release special versions of music videos like BTS’ “ARMY” version for their ‘Life Goes On’ music video that featured TikTok videos of BTS fans from all over the world.

Now that your favourite groups have done a comeback, and your bias and bias wrecker are rocking their new concept, the real work begins.

Check out the second part of Bandwagon's K-pop Fan Starter Guide where we cover Streaming Goals, V LIVEs, lightsticks and black oceans, and many more.