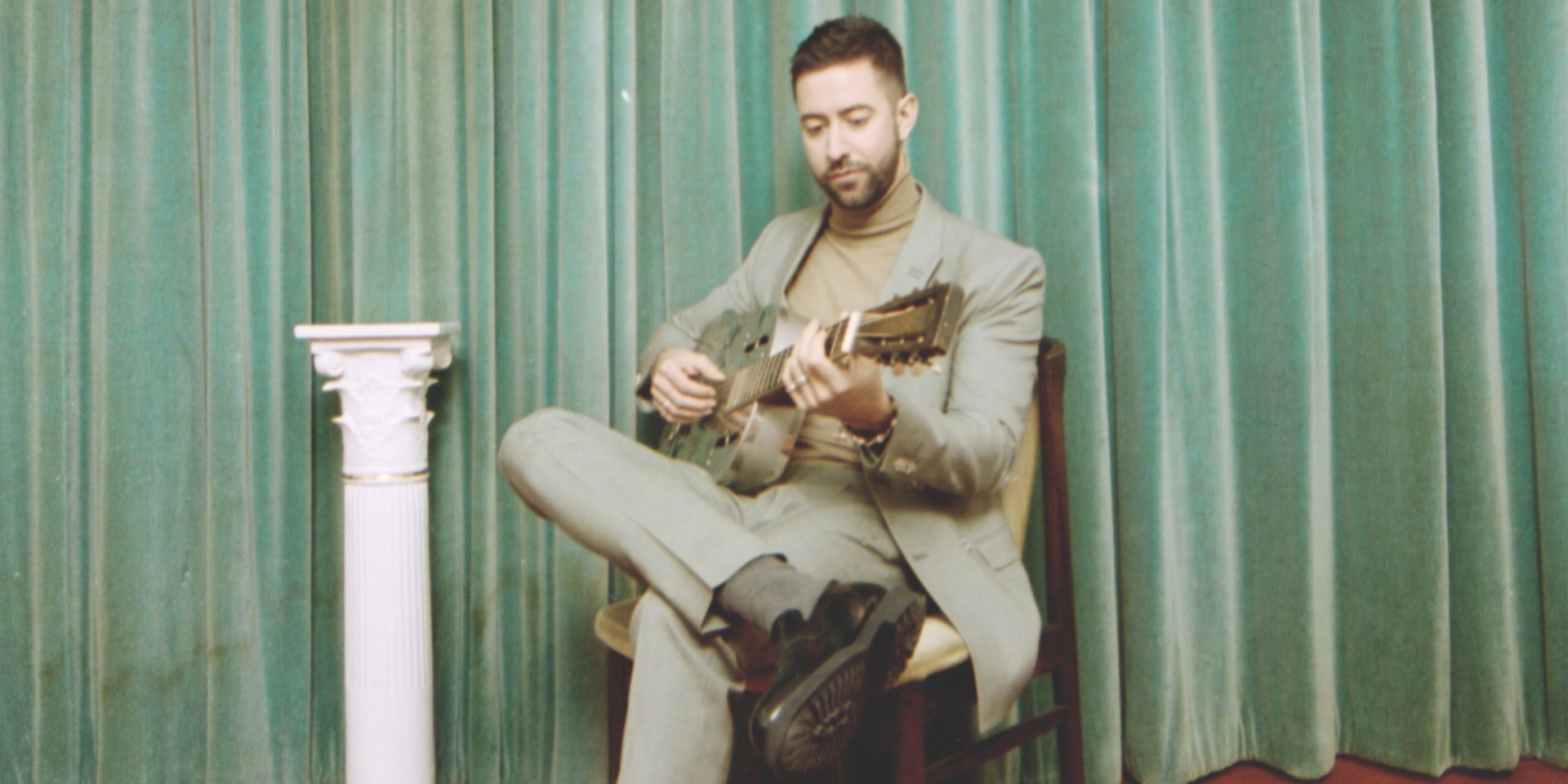 It's summer in most of the world, but for Bruno Major, he wakes up to yet another grey, drizzly day in London. Clad in a light grey hoodie akin to the colour of the sky outside, he glanced out of the window and said, "I like it though, I like it, it's good for sad songs."

Bruno Major adores music. He writes music not because his life depends on being an artist, but his very existence is for the love of music - to pour his entire soul and emotions into the audible medium for everyone in this world. It's been three years since the British singer-songwriter released his first album A Song For Every Moon, but his second album To Let A Good Thing Die which dropped early this month was worth every single second of the wait. The album is what he describes as '32 minutes of warmth', and it recalls more familiar singles such as 'The Most Beautiful Thing' which was co-written by FINNEAS, 'Old Soul', and 'Figment of My Mind'.

Pairing together bittersweet, melancholic lyrics that hit close to home and a harmonically rich soundscape, the Karpos Live Mix alum never ceases to paint a reality that exists outside a figment of listeners' minds. Over the low pitter-patter outside his window, he shared with us about how things have been for him during the lockdown, finding his artistic voice as a musician, and his plans to tour Asia in the future.

Hey Bruno, with most of the world in lockdown for a couple of months, how have you been coping with staying at home during this time?

Well, you know, I spend a lot of my time on my own anyway. I go to the gym in the morning and I go to the studio. Being a musician, it's quite a solitary existence anyway, so I didn't really struggle with the isolation, that was kind of normal for me, but it's obviously been tough not being able to talk. It's a strange time to release my album, but I'm really glad that it has come out and I'm really glad that people have been enjoying it.

Has your music-making changed in any way since the lockdown started?

I had a lot of time on my hands, obviously, so I've been doing a lot of writing, which has been great. Made a dent into album three, yeah, it's been nice to relax. I've been working very hard for a very long time and I've been pretty forlorn.

I find it impossible to turn down opportunities, if somebody says, "Go here and do this." I'm like, "Yeah let's do it!" It means that I don't really have any time off. To have two months of downtime, was really very welcome, if I'm honest or else I wouldn't wish this situation on planet Earth. It's been quite a nice thing to go home and see my parents.

In light of the protests happening recently as well as other social issues, what do you feel is a musician's role in a world full of social injustice?

I think artists are a product to their own environment and its the job of an artist to speak about things in a truthful way, but I do think, with regards to Black Lives Matter, my voice as a straight, white, cis-gendered, male from Britain is probably not the voice that needs to be heard the loudest. I'm very vocally supportive of Black Lives Matter and I've done as much as I can to speak out about it, but at the same time, I have to be aware that I'm not the disadvantaged person here. There are artists in the world whose voices should be heard louder than mine, I think.

Powerful energy in London today from people who care, and know the difference between right and wrong. Racism is fucking DUMB. #BlackLivesMatter pic.twitter.com/oK101pJH6s

Was it chaotic in London for you?

It's normally like it or not, it's subjective. Whereas Black Lives Matter doesn't feel subjective to me, it feels like an obvious example of right. So it was great to go there and feel like, that power.

Tomorrow I will, along with the rest of the music industry, stop to reflect. The music I make is heavily influenced by (and would not exist without) Jazz, a Black American art form and in my eyes the greatest American art form. I stand in solidarity with black men and women ... pic.twitter.com/4c7RYyPfmS

What is your favourite song out of everything you’ve written so far and what makes it so special?

I really like 'I'll Sleep When I'm Older', I think that song reflects where I'm in my life quite accurately and I feel like I have so much to do but so little time to do it in. I'm very constantly aware that I don't have enough time. So I'm going to go with that one.

What inspires you on a day-to-day basis?

Everything. It can be books I read, films I watch, things people say. I just have a notepad on my phone and I just write down the ideas that come to me. It can be birds that sing in the trees, it can be the wind rushing through the trees. It can be heavy metal music or you know, just a random thought. It can be anything and everything.

Having studied Jazz, I’m sure a lot of your listeners are curious to know about what made you choose to pursue a full-time music career as a singer-songwriter.

I think it has to do with finding my artistic voice. I worked very hard on the guitar and I got very good at it, but I never had a voice on the guitar in a way that I see Wes Montgomery or Kurt Rosenwinkel or Django Reinhardt, you know the great Jazz guitar players. They only need to play one note and you'll know it's them. That is their voice and their soul comes out in that way.

For me, I didn't find my artistic voice in guitar, I found my artistic voice in songwriting and the first time I wrote a song, I didn't need to work on that in the same way. I practiced guitar for 6 hours a day for 3 years, songwriting I just sat at the piano one day 1and all the songs fell out. It's a bit like that for my singing as well, I never really had to work on that.

So I feel like, maybe that's what I'm meant to be doing. But I do feel that I have a great love of language, I wanted to be a writer as a kid and what I love about songwriting is that it's music and it's words, and they affect each other. A lyric can be made more profound by the way that it is sung and the melody that follows. A chord can sound sad or happy depending on what words are being put on top of it and that's what the magic is in songwriting.

Bruno Major talks Asia tour, producing music for other artists, and how writing songs is like real magic

What do you envision Jazz to be like in a couple of years, or a decade from now?

Well that's a complicated question. I mean, Jazz has come from a place in the '40s and '50s where it was quite a pure art form and a very popular art form and it has sort of unfortunately been relegated to hotel background music. It's a shame, but at the same time, it had its moment and I feel that it has osmosised and influenced all music that we know.

There's not a song made now which isn't in some way influenced by Jazz and the history of Jazz. So in a way, it's there more than it has ever been. Hope that I'll still be making Jazz in 10 years.

How do you foresee your musical style evolving in the future?

I don't know, I've been thinking about it a lot recently. The second album came out and it was like the end of a creative period for me. A Song For Every Moon and To Let A Good Thing Die feels like the same thing to me, one movement. I know that for my third album, I really want to go somewhere very different from them. I'm not sure where that is yet, but I'm gonna maybe learn some new musical styles or travel somewhere and engage in different cultures, I don't really know but something's going to happen.

Since your first Asia tour in 2018, have you made any plans to return to perform?

Not at the moment, to be honest, touring is just out of the question because of the coronavirus, so we've canceled almost everything and I'm just waiting really, until we get the green light. As soon as we can, I promise I'll be coming, I really would like to come and perform. I want to perform my new album, I haven't toured it yet, you know, it's so strange, but we'll see.

Before we end, I’m sure your fans in Asia would love to hear some words of encouragement from you, would you like to say some words to them?

I would like to say, thank you for existing. I'm really grateful that I have people listening to my music in somewhere that is so far away from my home and I hope that they are coping with the lockdown, remember to keep positive and be grateful that you have a roof over your heads. So, I'll see you soon in real life.

Fill your heart with bittersweet nostalgia while listening to Bruno Major's second album To Let A Good Thing Die: