BTS just wrapped up their anniversary celebrations with MUSTER SOWOOZOO 2021.

With concert restrictions in place since last year, most artists have transitioned to online shows to reach out to their fans, and this includes global superstars BTS. In 2020, the Grammy-nominated act held two record-breaking online concerts: Bang Bang Con The Live and Map of the Soul ON:E. Powered by Kiswe through VenewLive, the events were livestreamed from South Korea and seen from across the world.

This year, BTS took their "Muster" event online for the first time - a concert and fan meeting in one where ARMY get to enjoy performances alongside skits from the members. Over 1.33 million paid viewers from 195 countries reportedly tuned in to MUSTER SOWOOZOO 2021, which raked in an estimated USD 71 million in tickets and merch sales.

MUSTER SOWOOZOO was the culminating event of this year's FESTA, to celebrate BTS' 8th anniversary as a group. Throughout the 2-day affair, the 'Butter' hitmakers performed fifteen track-setlists and prepared special surprises for each day of the show. 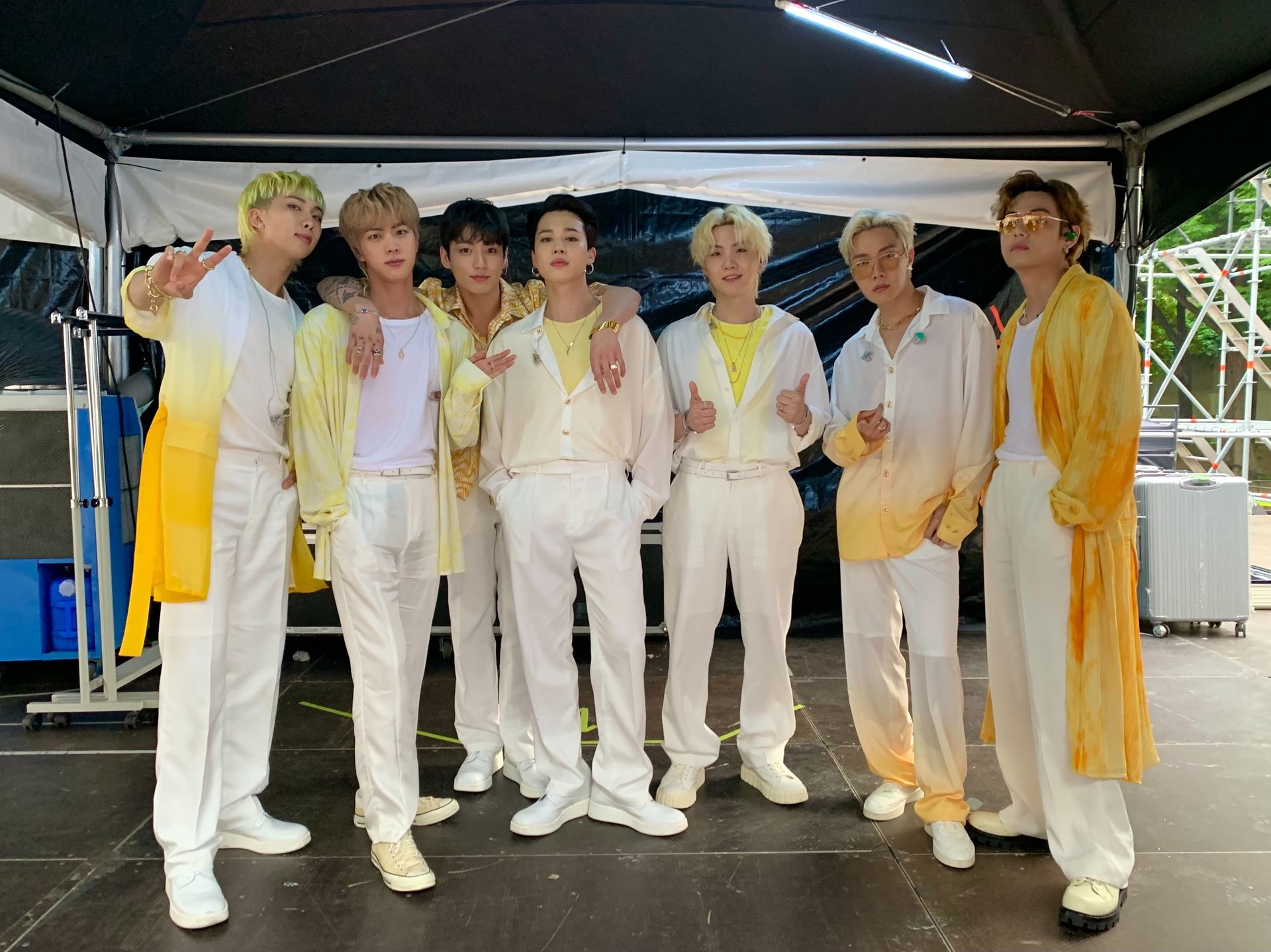 From OT7 versions of solo songs to water fights on stage, and the traditional fireworks finale, here are 8 things we loved about MUSTER SOWOOZOO:

The energy of BTS 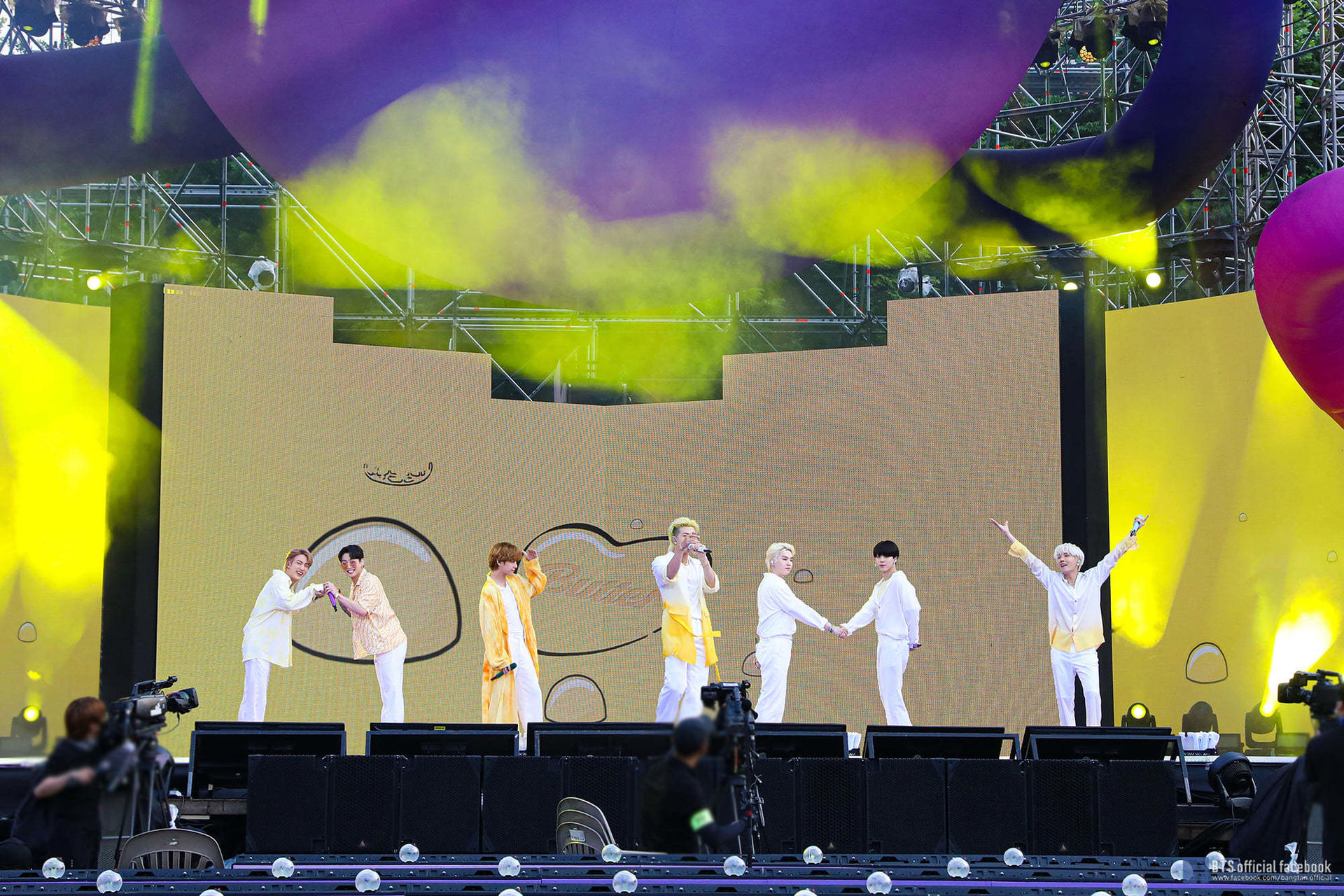 Not being able to perform in front of a live audience for more than a year has been one of the heartaches an artist or band can have. The seven members have expressed how much they miss performing for ARMY when they get the chance. At this year’s muster, their energy radiated through the screens of viewers. You can always feel and hear the sincerity in their voices every time they perform. Their talent, passion, and how they present themselves on stage are something you can look forward to whenever they’re in concert. 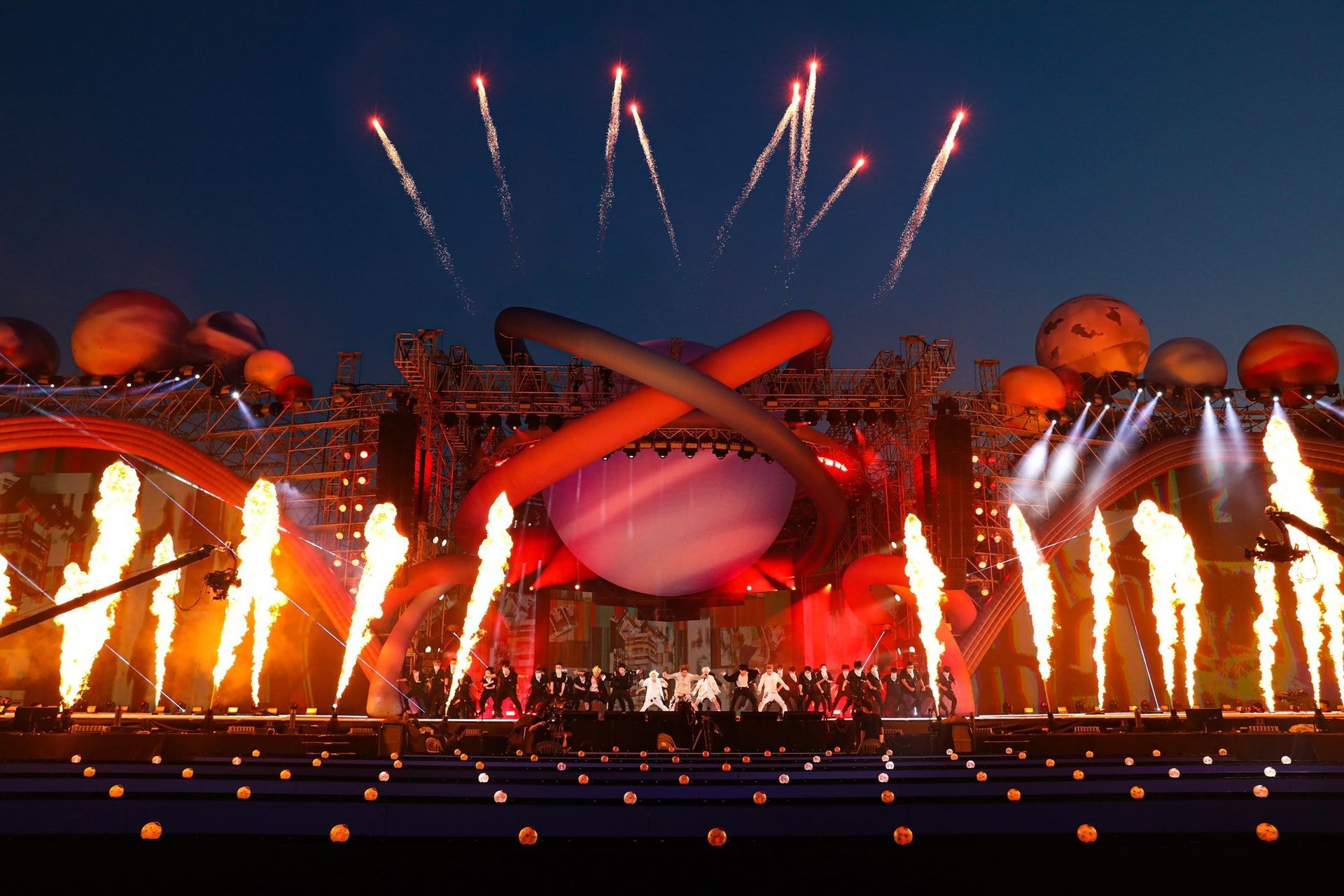 It was a treat to be able to hear a few seconds of the group’s solo tracks where most of them can only be found on their SoundCloud. J-hope started with 'Blue Side,' the full version of his track from Hope World, followed by Jimin’s 2018 year-end present, 'Promise,' RM’s 'everythingoes' from mono., Jung Kook’s 'Still With You,' which was a single drop from FESTA 2020, Jin’s birthday release, 'Abyss,' SUGA’s 'People,' under Agust D’s D-2, and V’s 'Winter Bear' from 2019. 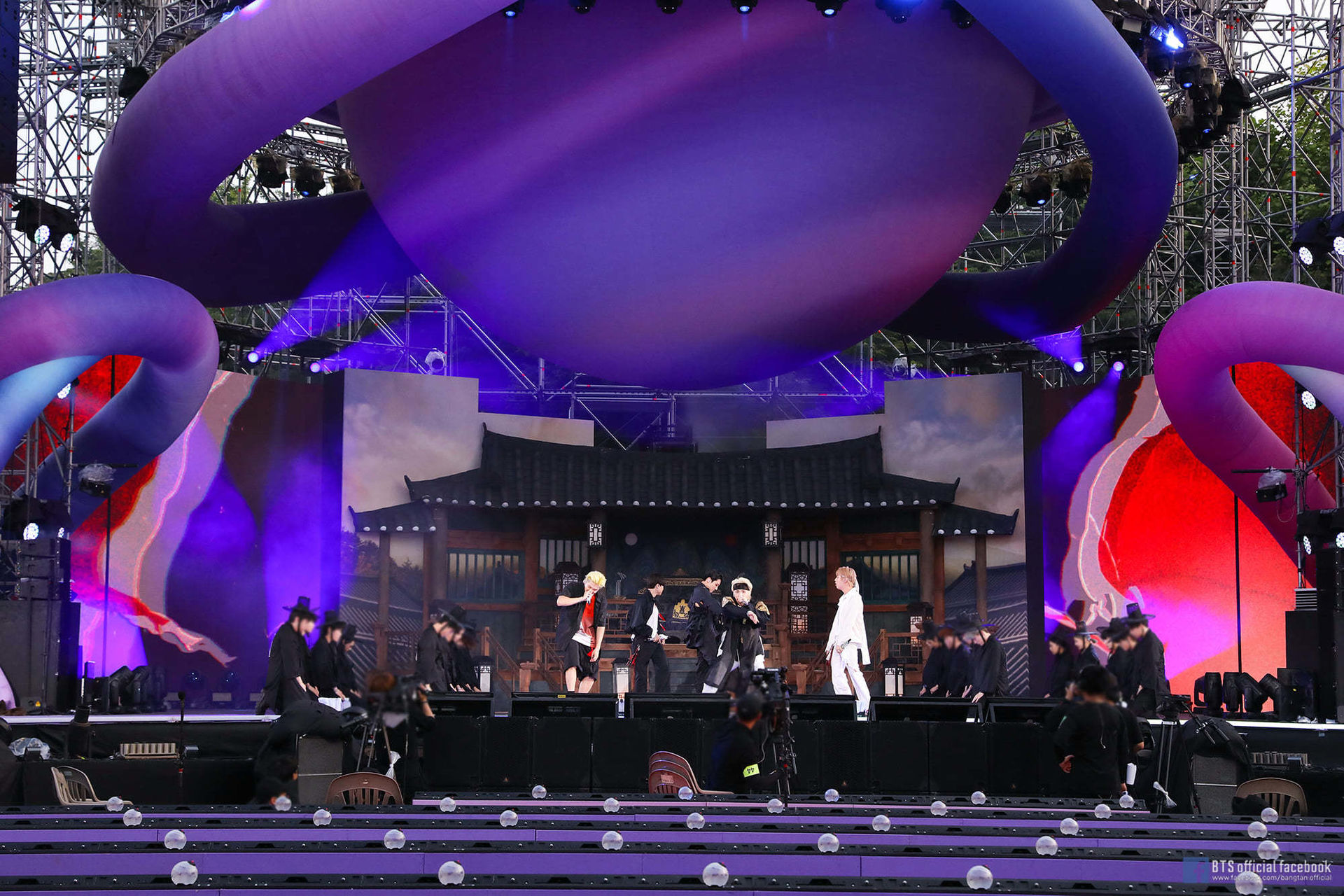 These performances were a surprise for all the MUSTER SOWOOZOO viewers. Known as solo songs of SUGA's alter ego, Agust D and J-hope, fan favorites turned into even more special OT7 versions. 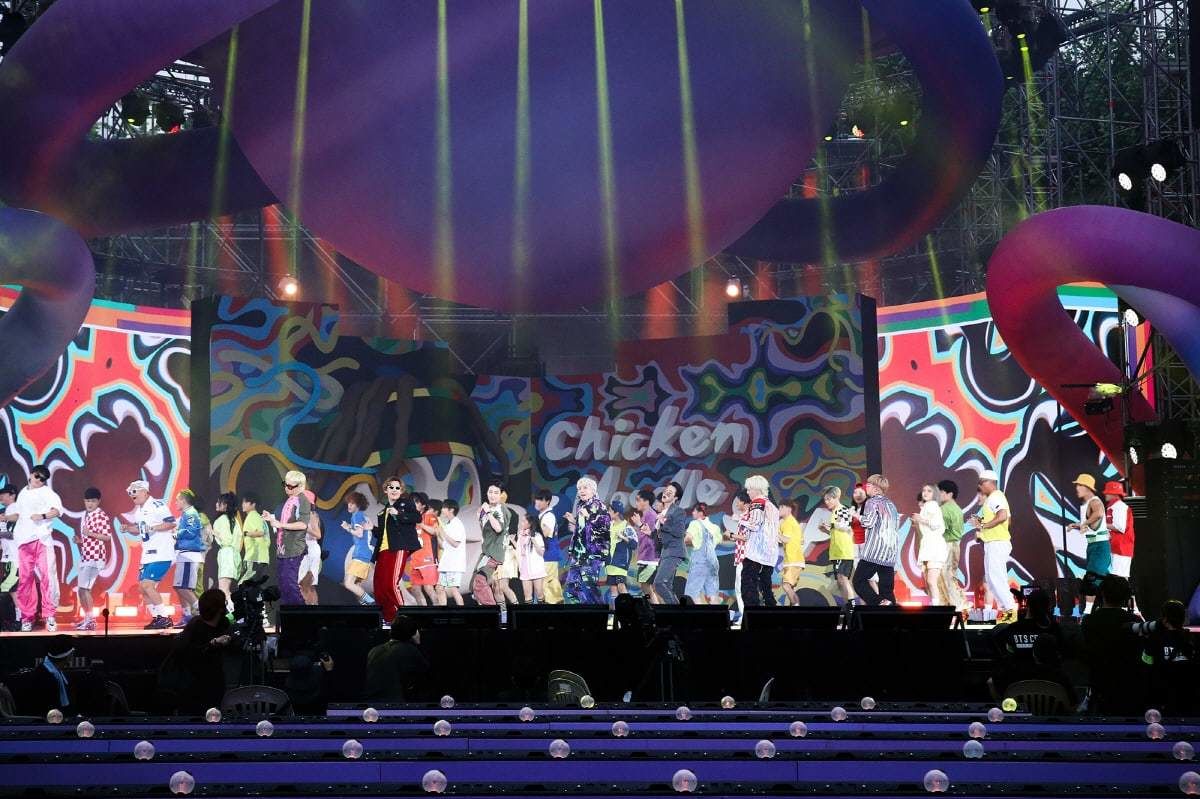 All seven members added their own flavor to their parts - the vocal line showcased their rapping skills for 'Daechwita' (also known as the birth of Taechwita).

A vital part of every concert, the backup dancers from Ten Agency x Studio also added life to the performances throughout the show.

The water fights of ‘So What’ 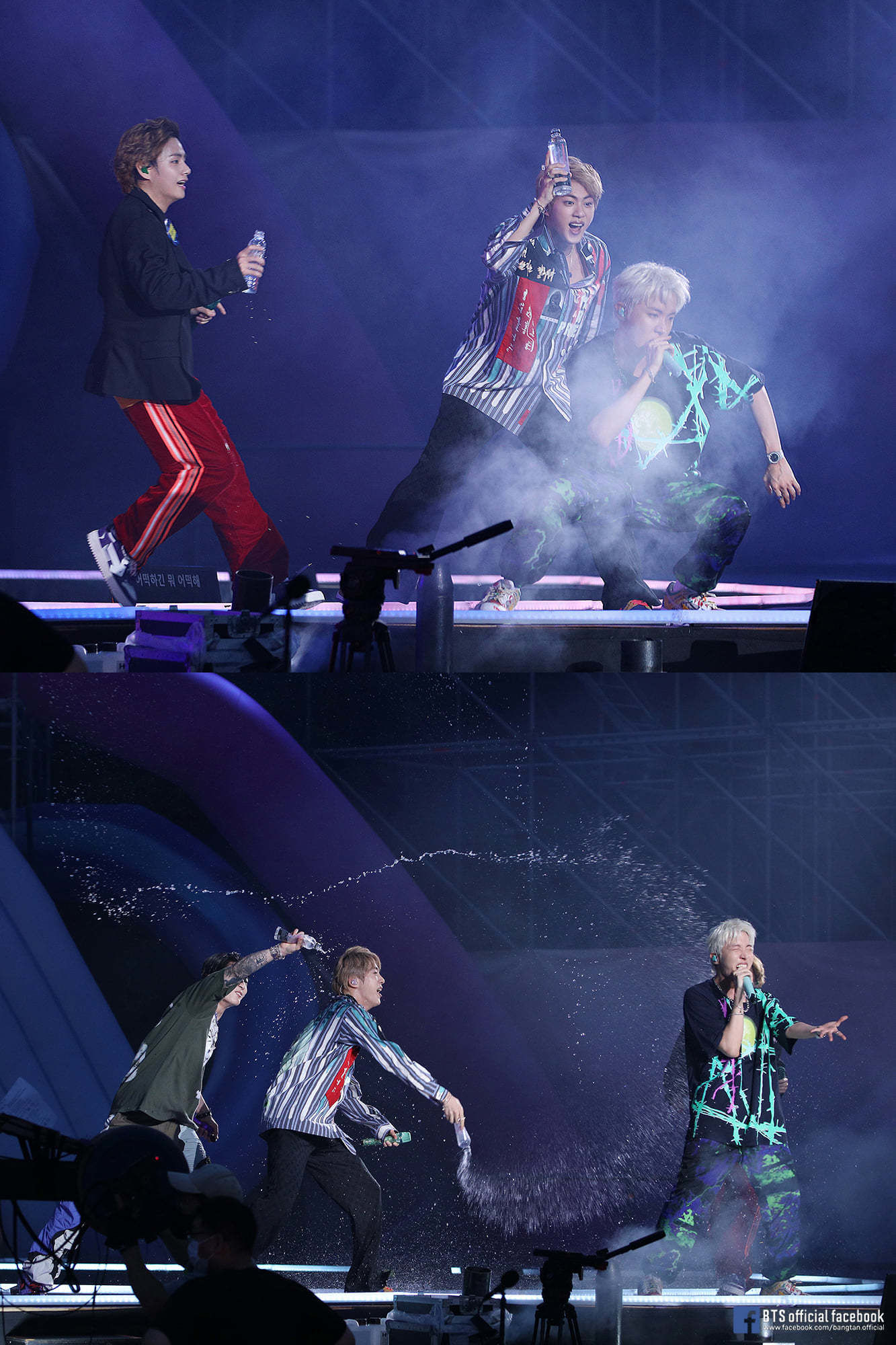 The members were running, jumping around, and having a good time on stage while performing the upbeat favorite from their 2018 album, Love Yourself: Tear. Jin then picks up a water bottle and initiates a water fight (just like old times). His brothers join in on the fun and splash the rest of the members as well. This continued until Day 2!

@bts_bighit y’all should open up a water park pic.twitter.com/FXHVC8v9m4 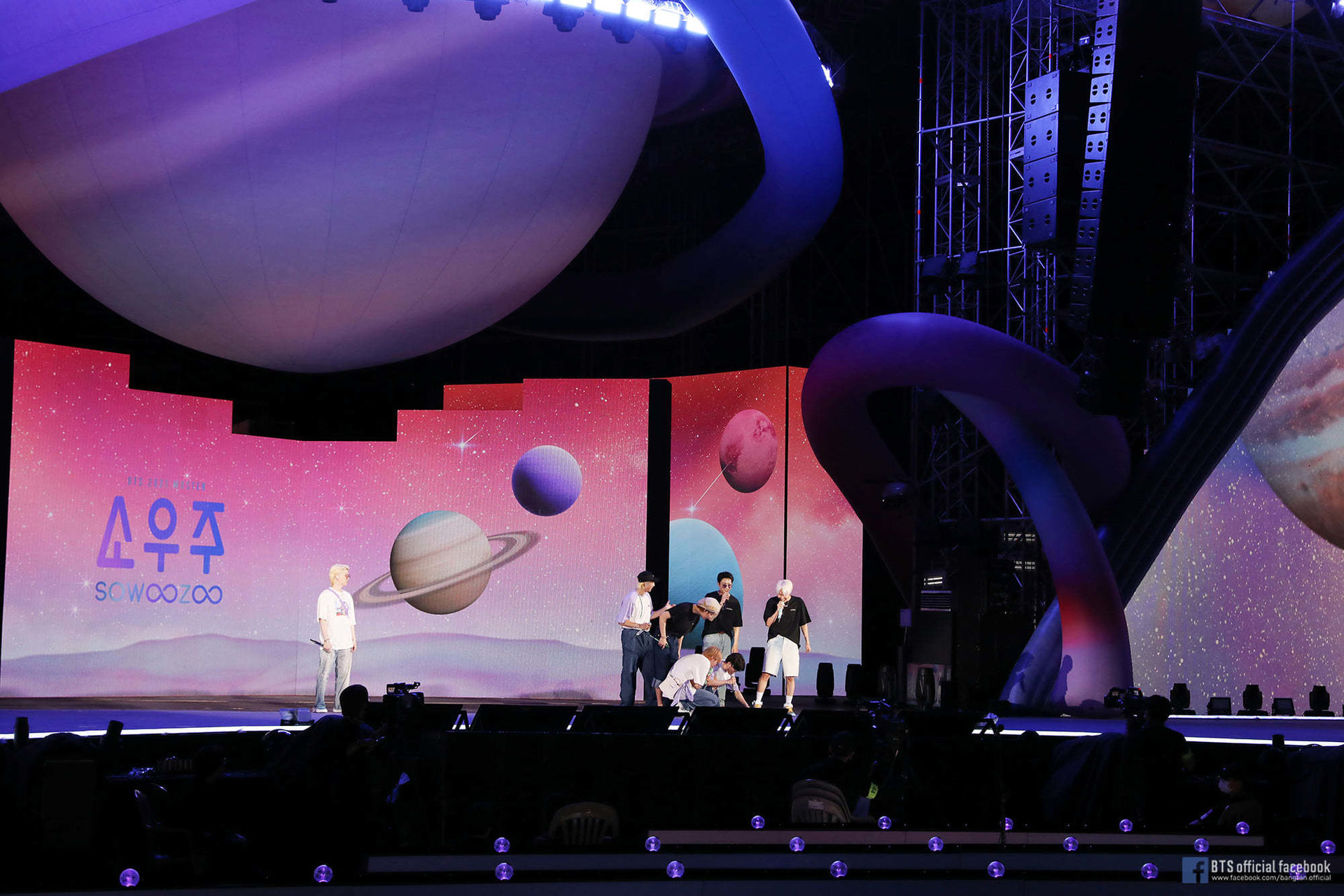 The online event had single and multi-view options. If you paid attention to the other screens, you could see the members being themselves, joking around with each other, and showing how much they miss being on stage.

A massive infinity symbol-shaped stage with multi-colored planets was built just outside the Jamsil Olympic Stadium. It felt like a 2-day universe was brought to life for BTS and ARMY to experience. 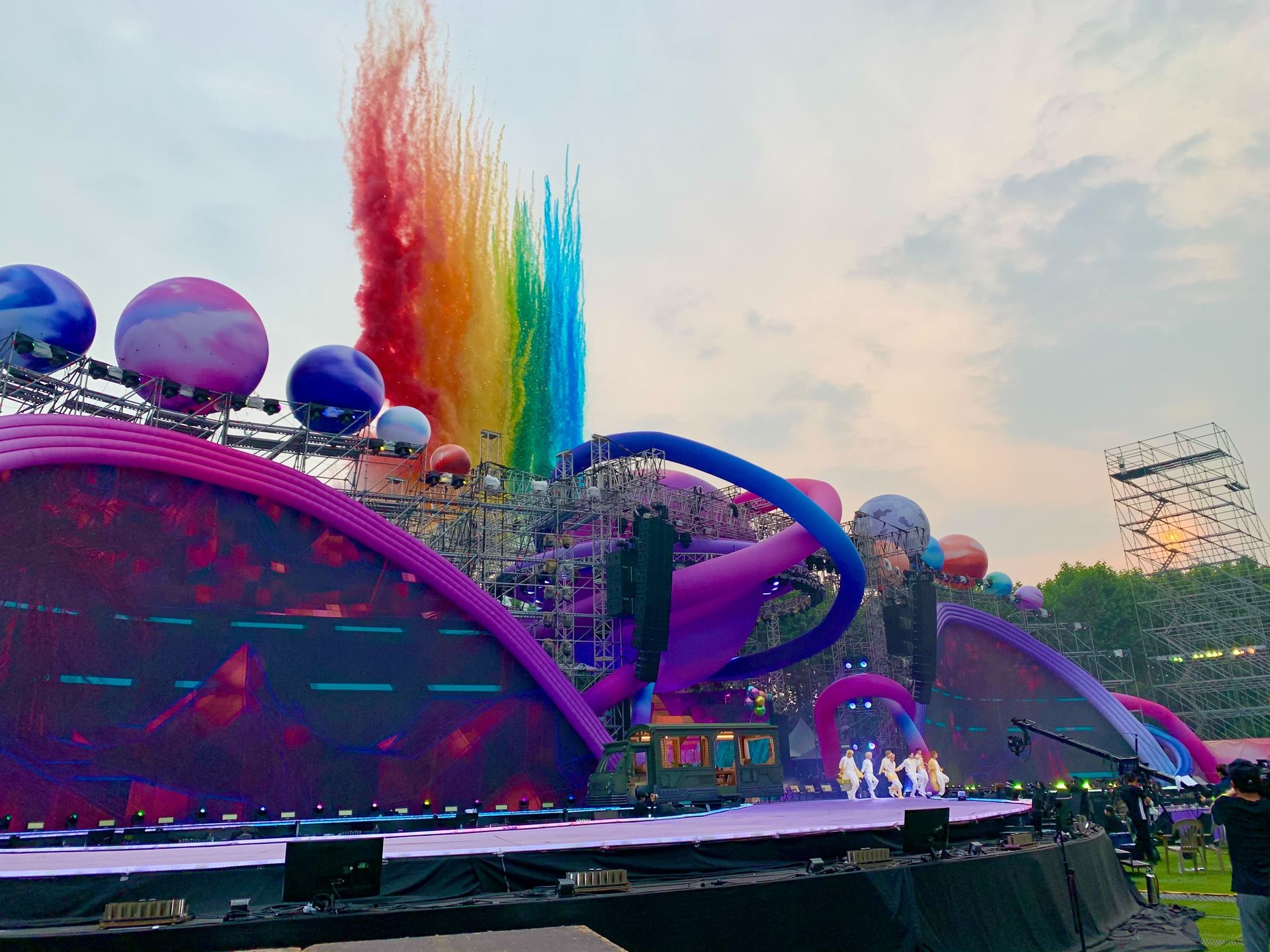 Their live band, Ghost band, brought so much energy to the performances. There is indeed a difference when you hear a song live because of the embellishments that can be added and the small but significant changes the performers can make, which allows you to see how a song can be transformed in multiple ways. Like any live concert, there can be technical mishaps such as mic and mixing issues which the members powered through. 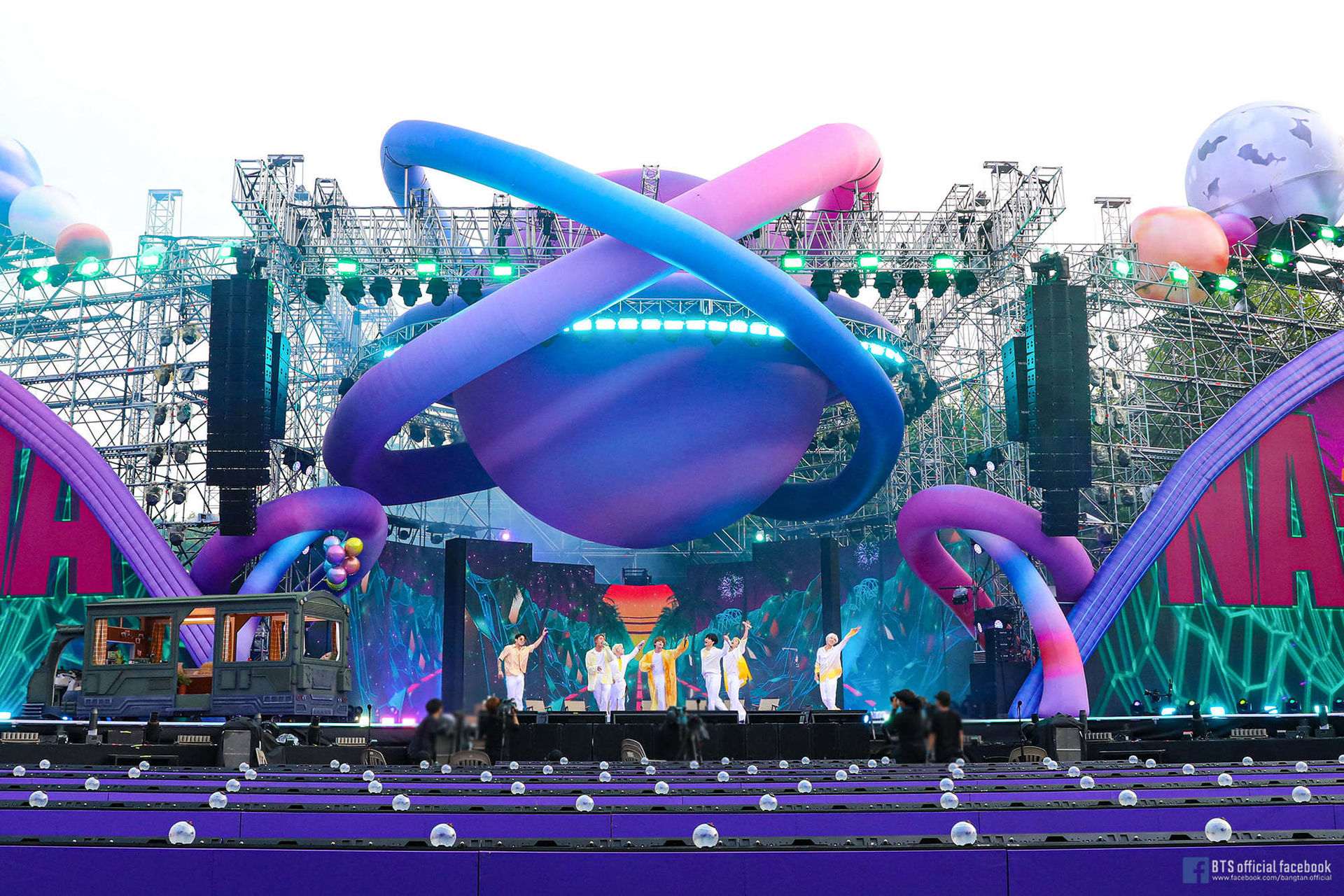 BTS were able to see a number of ARMY through the laid out led panels in the stadium thanks to ARMY on Air. Cheeky, a Filipino fan part of the ARMY ON AIR event, said that it felt like a “Zoom party.”

“I didn't really see myself on the screen but knowing BTS has a possibility of seeing that makes me happy, especially when we are doing the gestures and BTS are mimicking it on stage makes me feel like they really know we were there with them.” Cheeky shared. 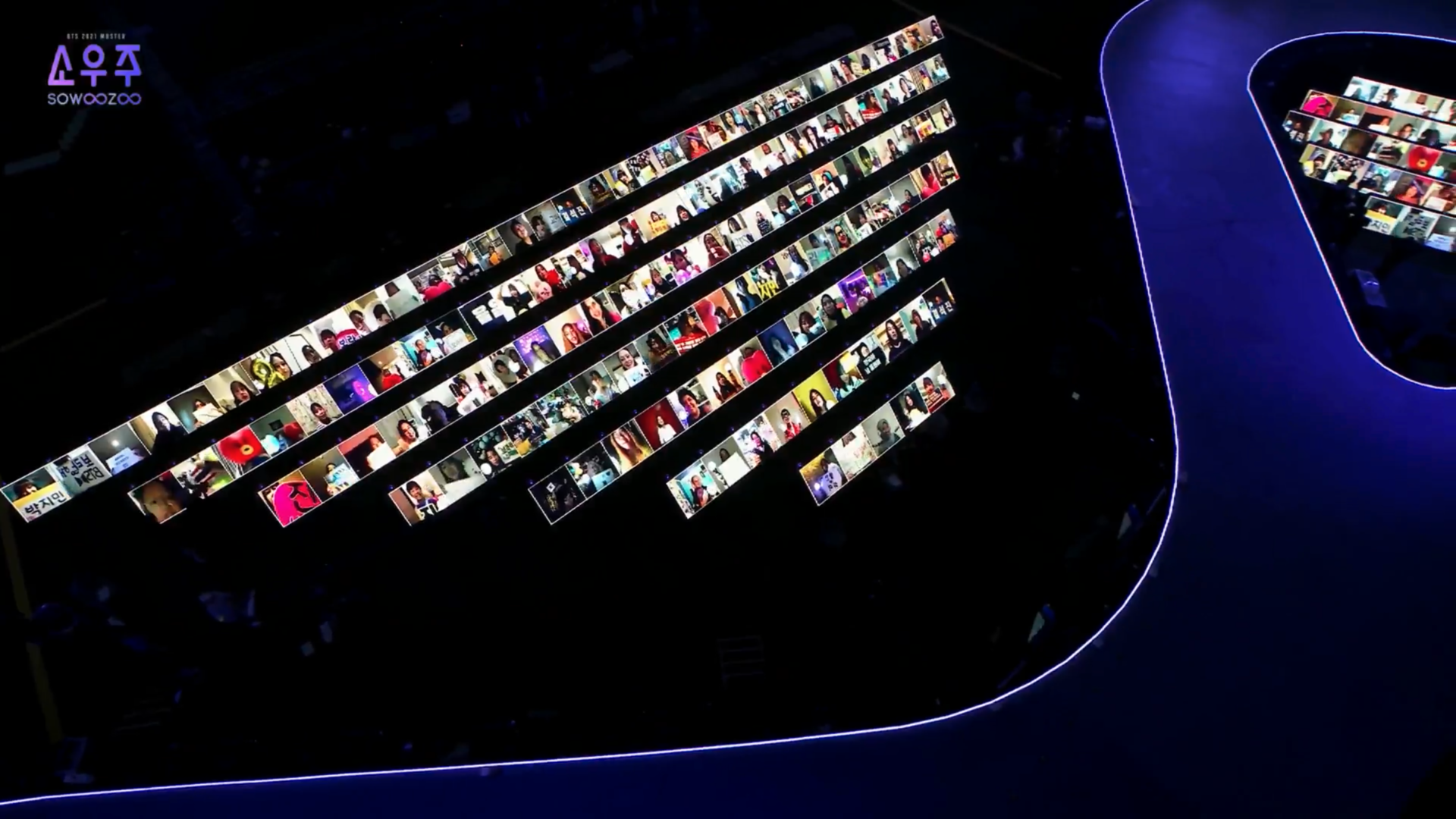 A BTS concert would not be complete without fan chants. Days before the Muster, HYBE called out to ARMY to send over recordings of their voices which will be played at the event. They gave signals for them to decode which songs to record for, and they turned out to be ‘IDOL’, ‘Telepathy’, ‘Dis-ease’, ‘Fire’, ‘So What’, and ‘Mikrokosmos’. 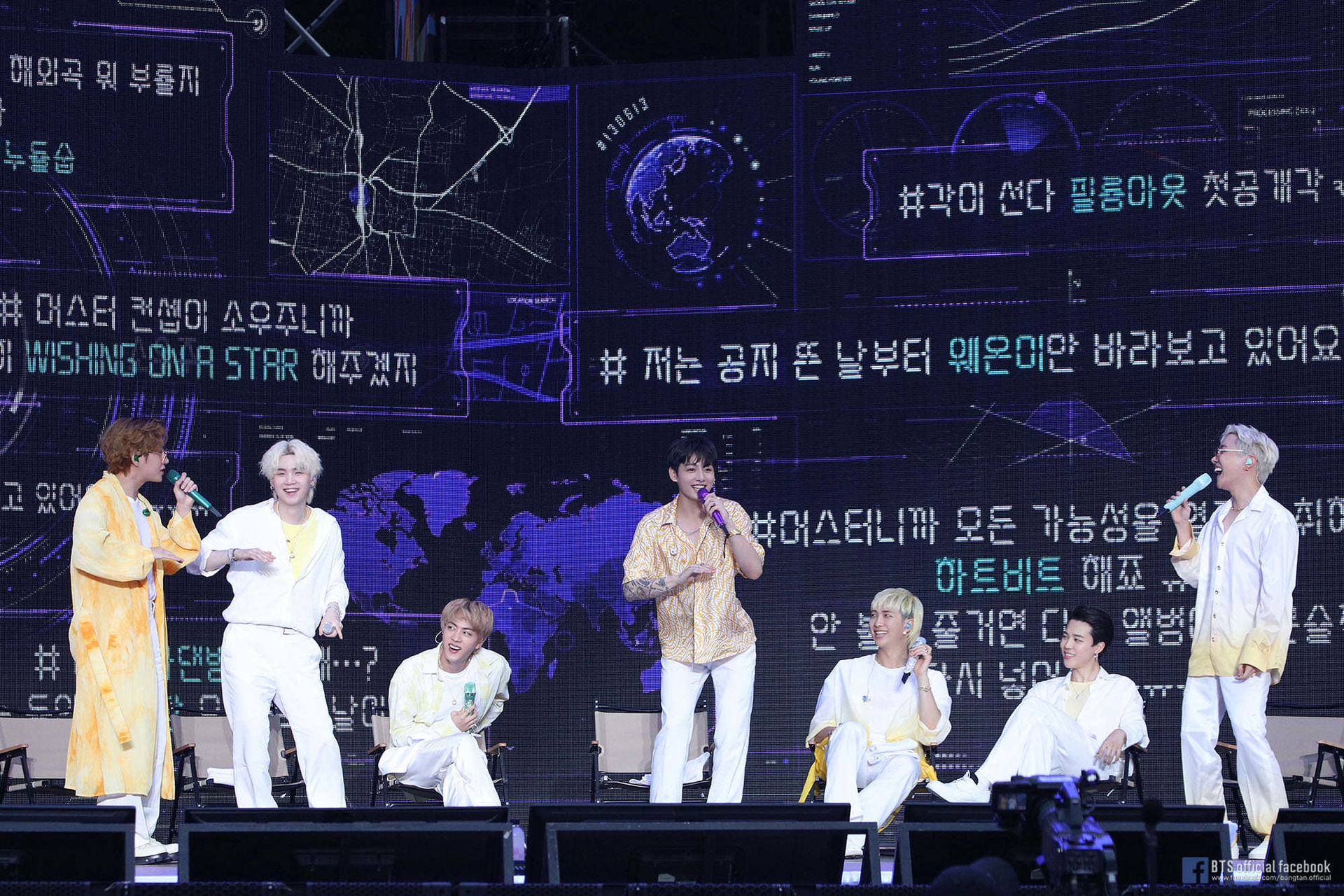 In ARMY Signals, the BTS members shared the many different ways they try to reach out to their fans.

At the end of every BTS concert, you can expect a grand fireworks display as they leave the stage, and for this online event, ARMY were able to witness it once again. 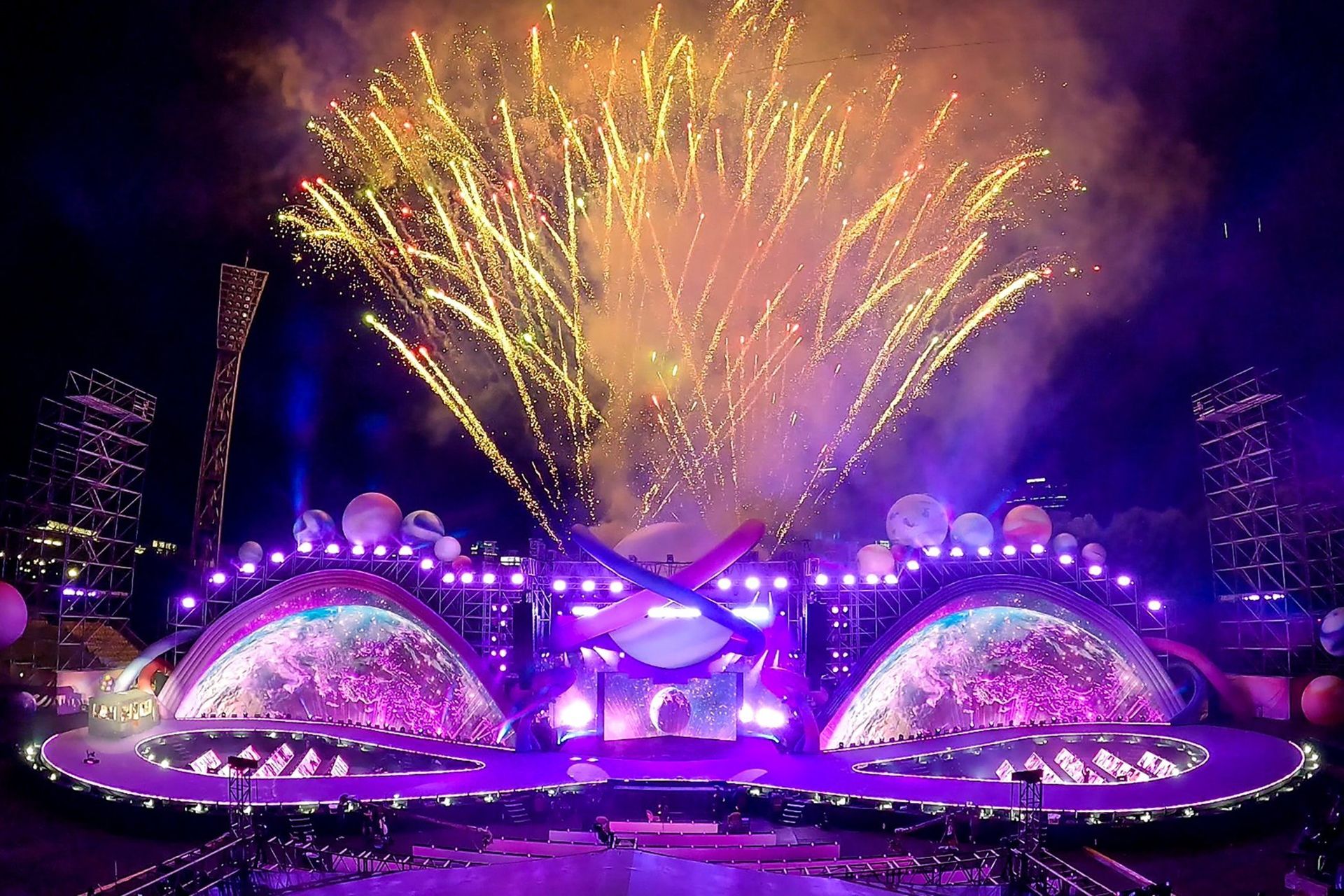 BTS have built a stellar track record over the years with ARMY behind them. During the ending ments of Day 2 (according to fan translations), J-hope shared how it felt liberating to perform outdoors. “I want to keep these emotions alive and wish for the moment when I can have fun with you all to come soon. To our fans all over the world who enjoyed Muster with us, thank you so much.” 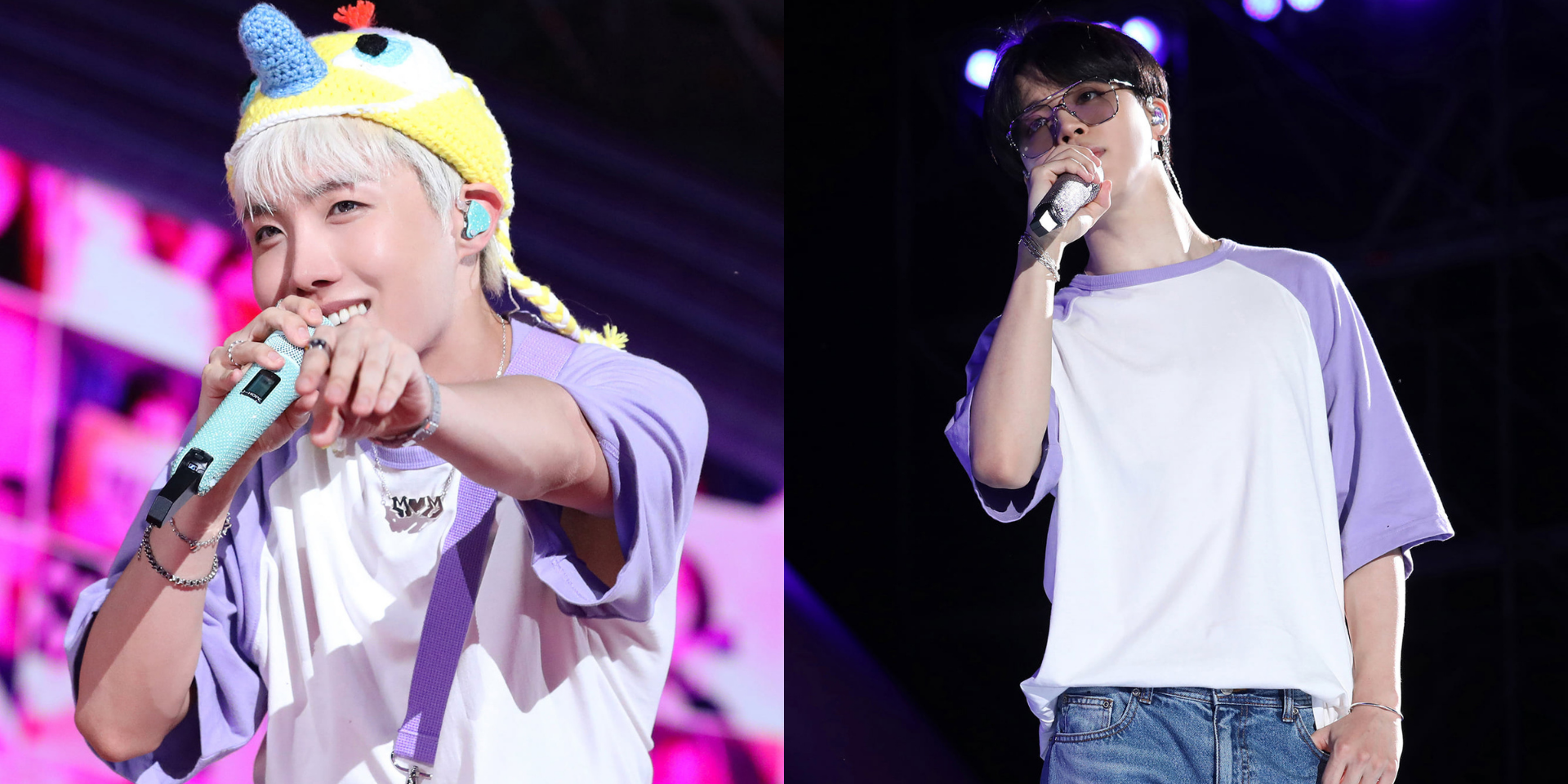 As for Jimin, June 14 felt like the start of a new year. “After spending such a good time with you all today, I feel like we would be able to start a good rest of the year so that makes me happy. I hope you all also have only good and happy times until June 13th of next year. Today was really fun. I love you.” 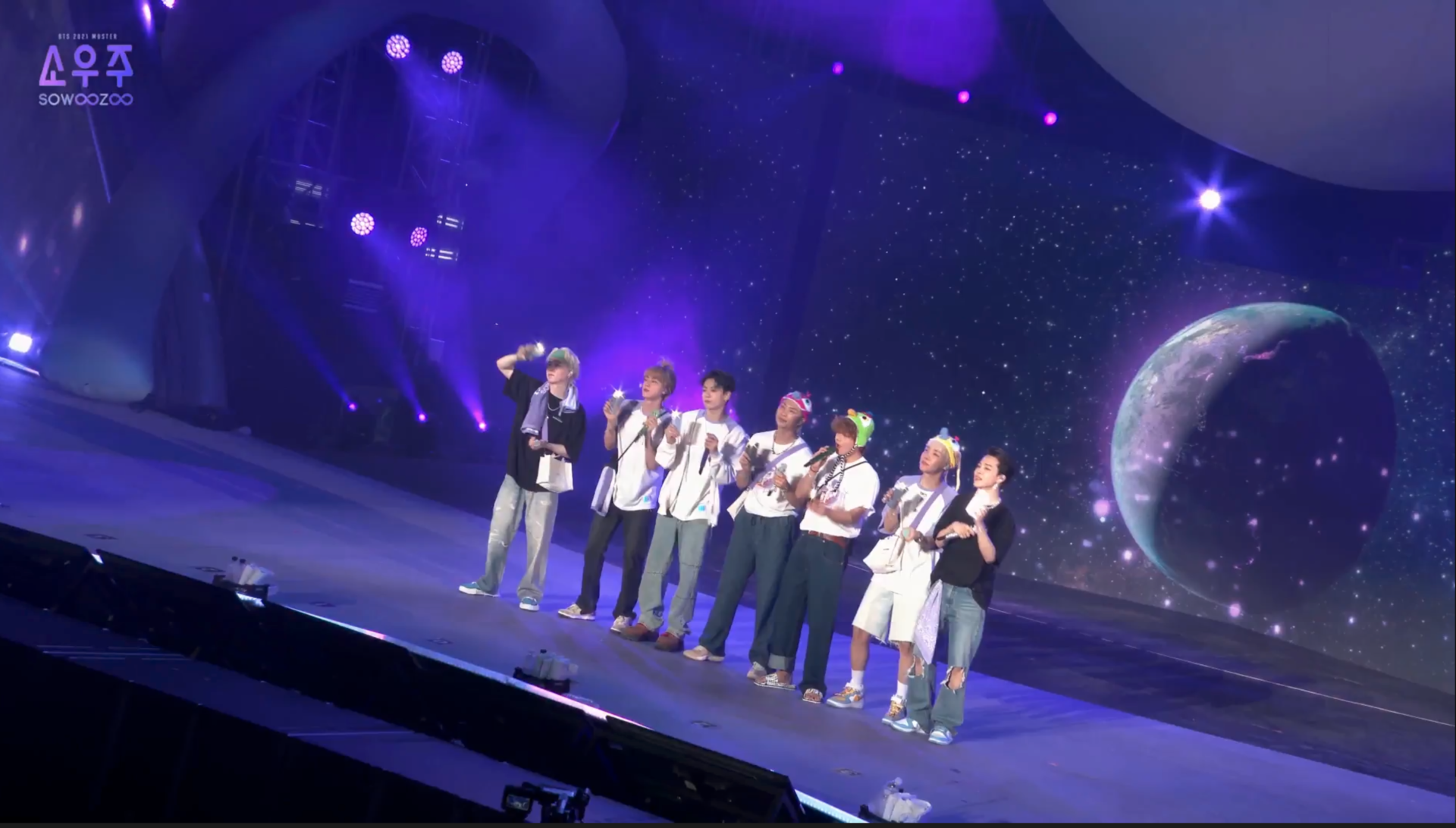 RM related the experience to his new song 'Bicycle.' “Like I said in the lyrics of 'Bicycle,' the miracle is not so far, we can see it’s really close. Miracles aren’t huge things, it’s just this. The time. This communion. Even if you’re not here, we can feel you 100 percent for sure.” He is thankful for the roller coaster ride he has been on with the millions of fans that have joined them in their journey. 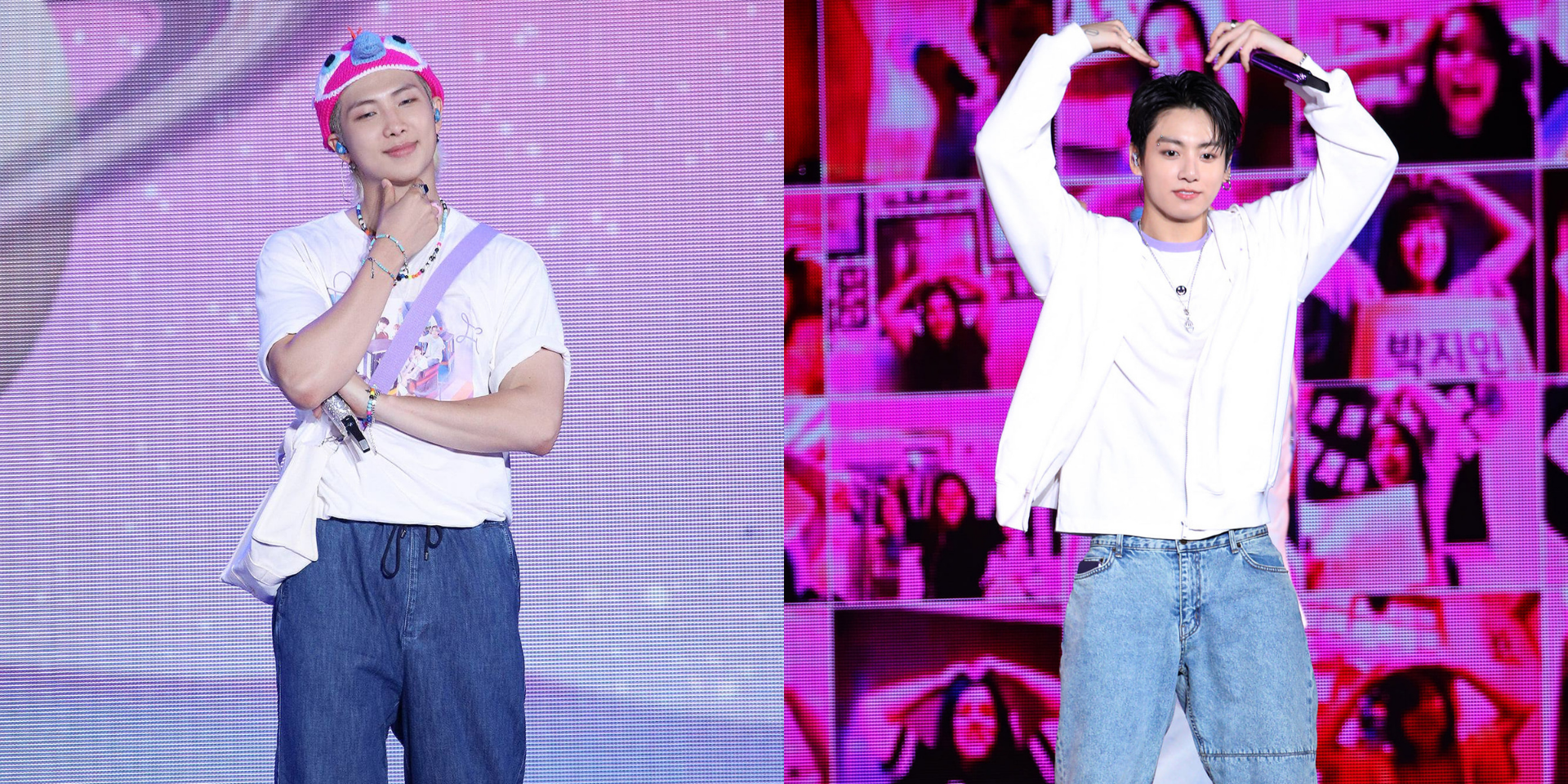 On ARMY’S support and hard work, Jung Kook expressed how he wanted to give back to that. “And the moment we meet, I won't care about how hard it's been. I'm just gonna give my all in front of you. So until then, please don't get hurt and stay healthy. Since there is still a lot of time left for me… I'm gonna sing until the day I die.” 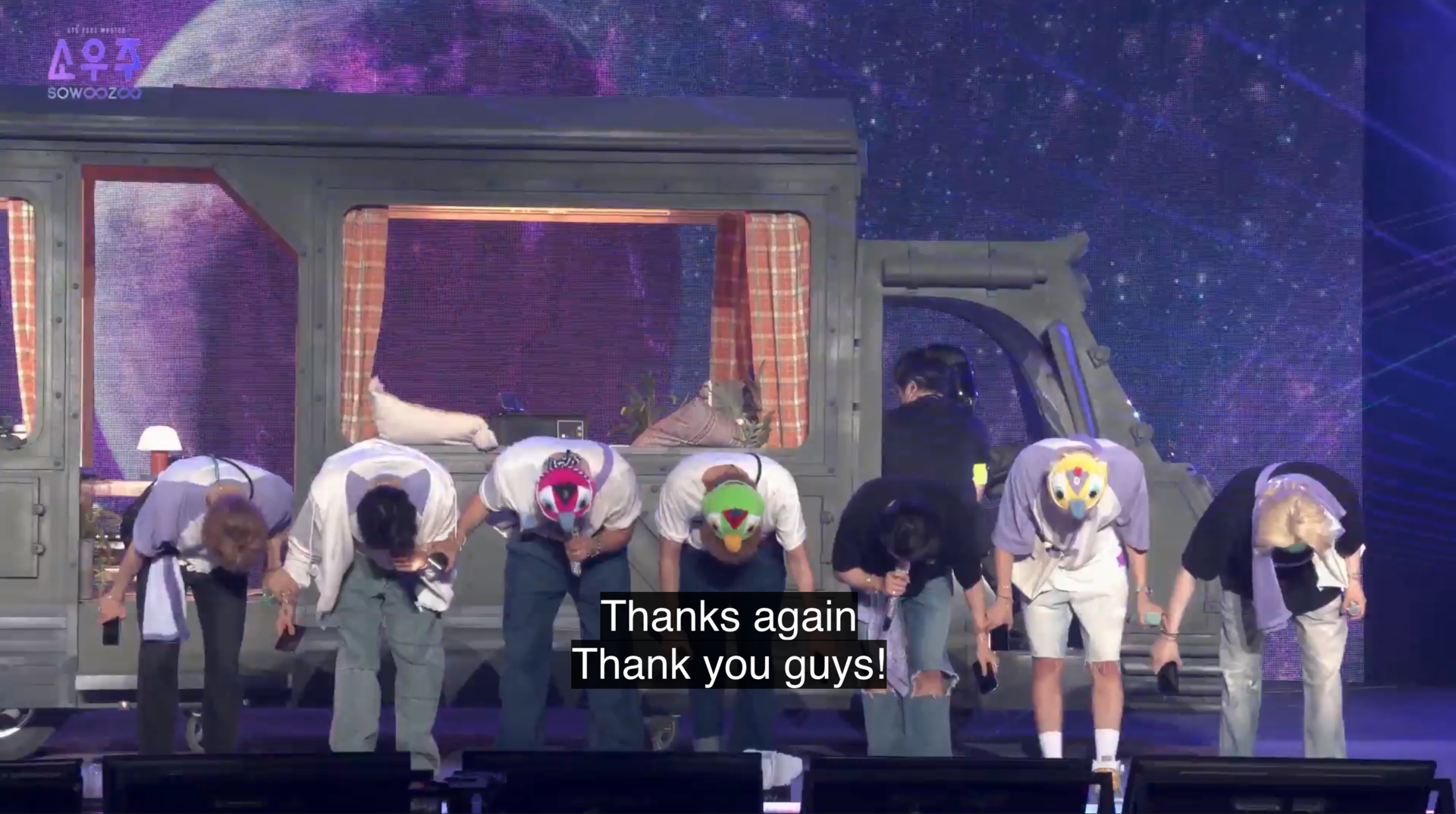 Jin, sporting his "apple hairstyle," shared how they are always beside ARMY. "When you say something, we always listen and we always make an effort to do things according to your wishes. I hope you remember we aren't far and that we are always beside you. Be happy, everyone.”

SUGA talked about how they wanted to give the actual feel of a concert. “With today's advanced technology, I feel grateful that we are able to perform in front of you real-time, although not in person. We had a lot of fun - I'm not sure how fun it might've been for you all, but I hope you enjoyed it. We really had a lot of fun today.” 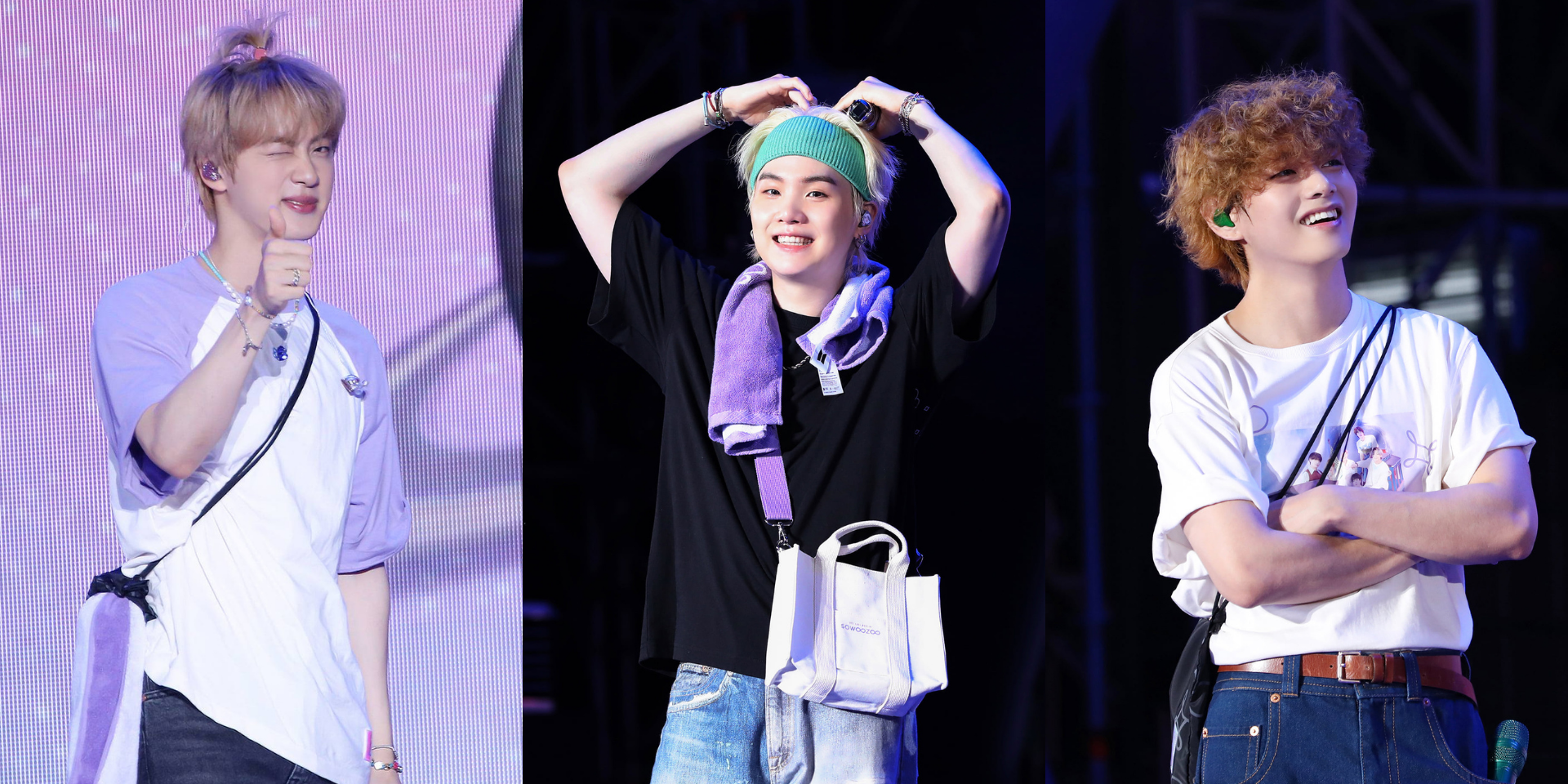 V shared how he was able to let go of some anxiety and that he had fun. “I sometimes go to Weverse when I'm bored or had a drink. When I read ARMYs' messages and letters and things like that, I get a lot of strength and these days I think a lot about how it is for these people that I'm working so hard and standing here.” 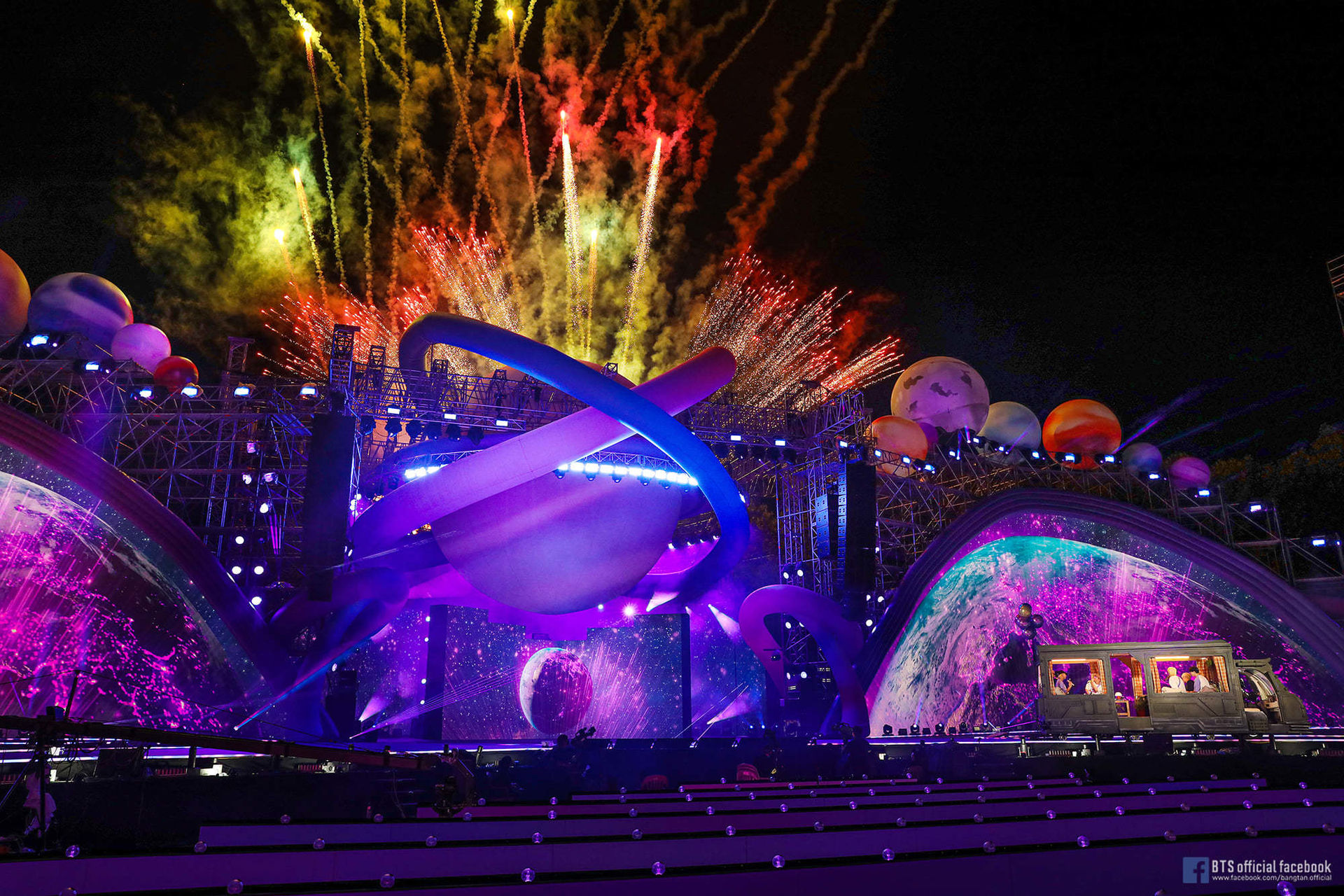 SOWOOZOO, the name of the event, is the Korean title of ‘Mikrokosmos”. This was their last song. Just like the lyrics, the 2-day concert has made the ARMY “shine, dream, smile”, knowing that BTS and ARMY have each other's backs. 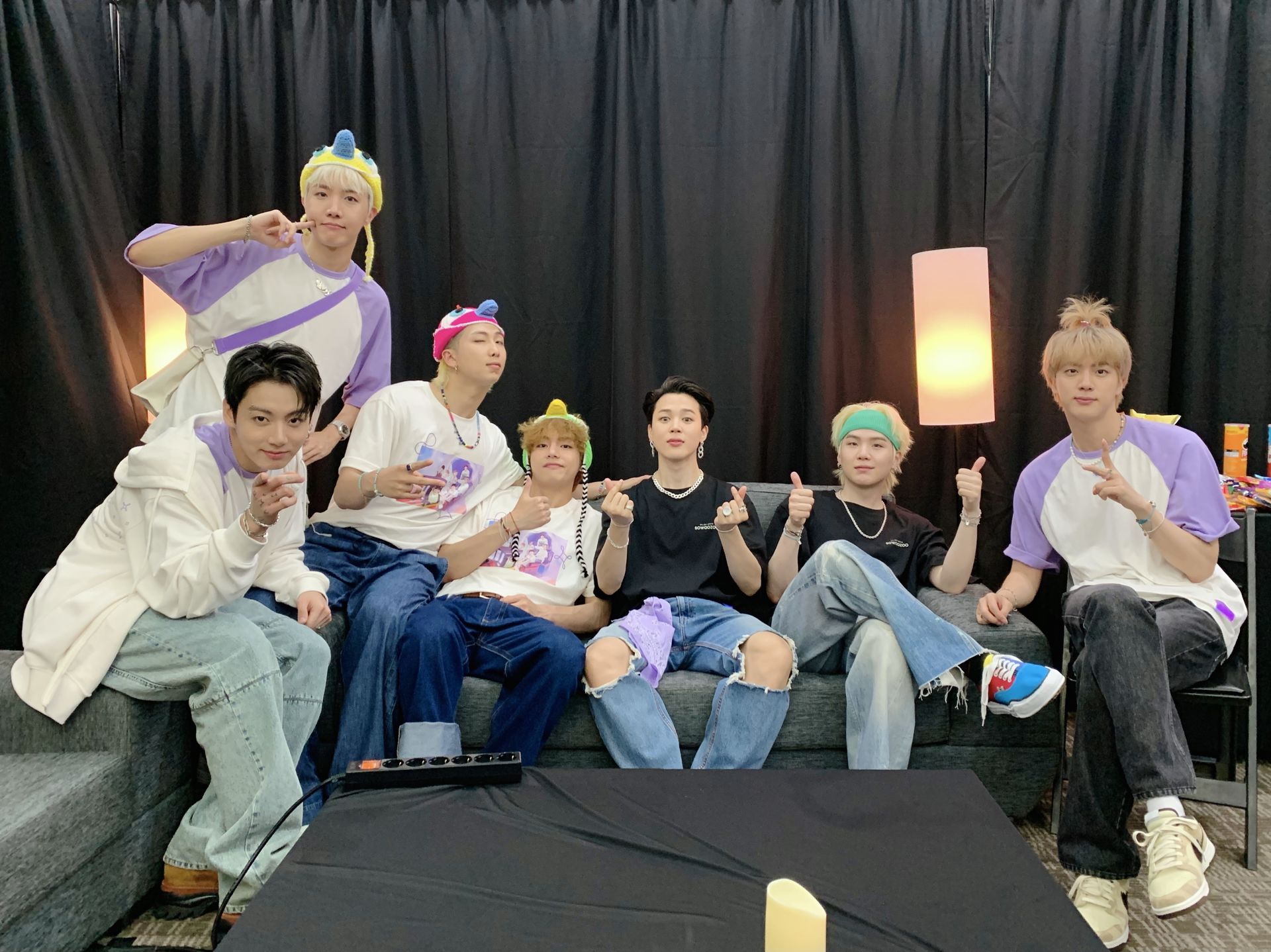 Fly To My Room

Wishing on a Star (Korean ver.)

Fly To My Room

Wishing on a Star (Japanese ver.)