As a special treat for ARMY, the GRAMMY-nominated group will hold MUSTER SOWOOZOO this June.

The first edition is happening on 13 June, 6:30 PM KST/JST (5:30 PM PHT/SGT), while the "World Tour Version" is set to take place on 14 June, 6:30 PM KST/JST (5:30 PM PHT/SGT) where the 'Dynamite' act will perform some of their foreign-language songs. Both shows will be livestreamed from an outdoor stage set up and will be including some "never-before" performed songs on the setlists.

Get to know Ghost band, the live band behind BTS

The date is special for both BTS and ARMY as it marks the 8th year of BTS as a group.

One-day and two-day passes for MUSTER SOWOZOO will be available on VenewLive and Weverse Shop from 26 May, 12 PM KST (11 AM PHT/SGT) until 13 June 2021. Ticketholders should validate their tickets at least one hour before showtime.

4K Single-view and HD Multi-view options (in limited quantities) are exclusive to ARMY Membership holders for KRW 59,500 (1-Day Pass). ARMY Membership holders who wish to watch in 4K on both days should purchase tickets for both show dates (13 and 14 June). Meanwhile, HD Single-view tickets are available to the general public for KRW 90,000 (2-Day Pass) and KRW 49,500 (1-Day Pass).

Each ticket can be used to log in to two devices at the same time. Live subtitles will be provided in English, Chinese, and Japanese. 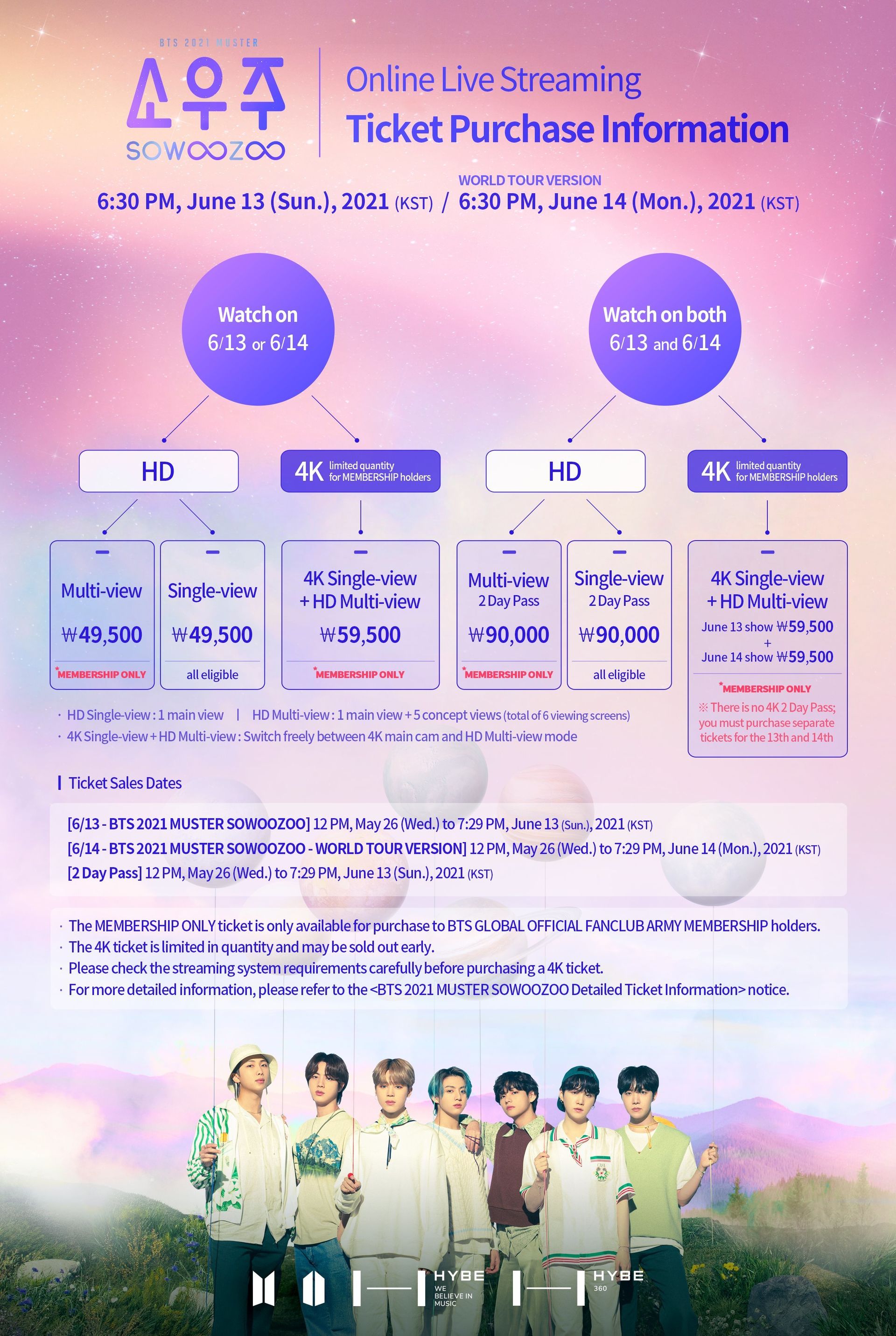 Kiswe talks working on BTS' online concert MAP OF THE SOUL ON:E, thriving in a pandemic, and their future plans

Limited-edition MUSTER SOWOZOO merchandise ranging from clothes to accessories will be available on Weverse Shop starting 2 June, 11 AM KST/JST (10 AM PHT/SGT, 10 AM EST).

Fans can guess the clues left by BTS for their MUSTER SOWOOZOO setlists.

Fans can take part in the online fanmeet wherever they're from in the world with ARMY IN ECHO. 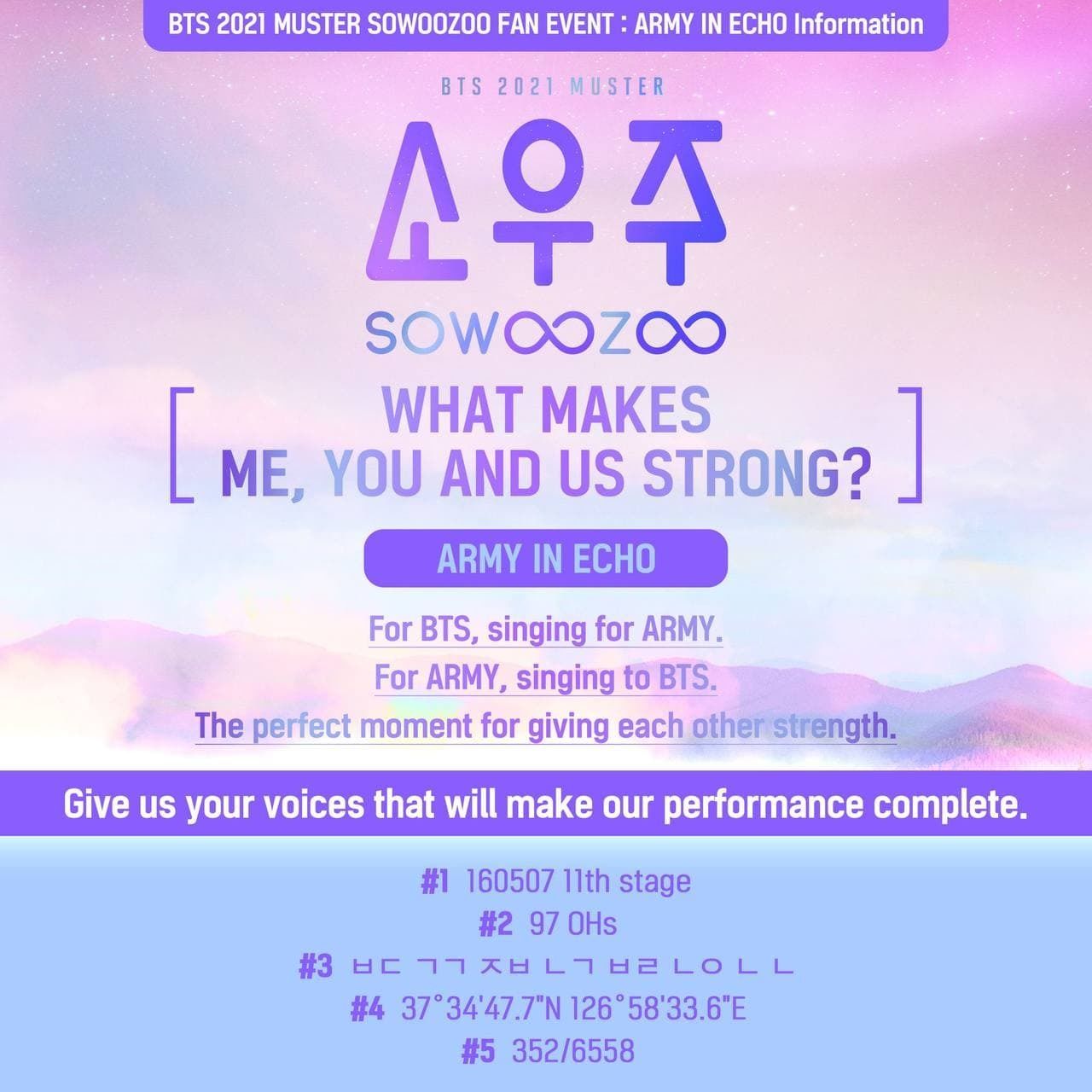 Fans can choose from the five songs listed above (solve the clues for the song titles!) that ARMY can help BTS sing. Check out the mechanics below: 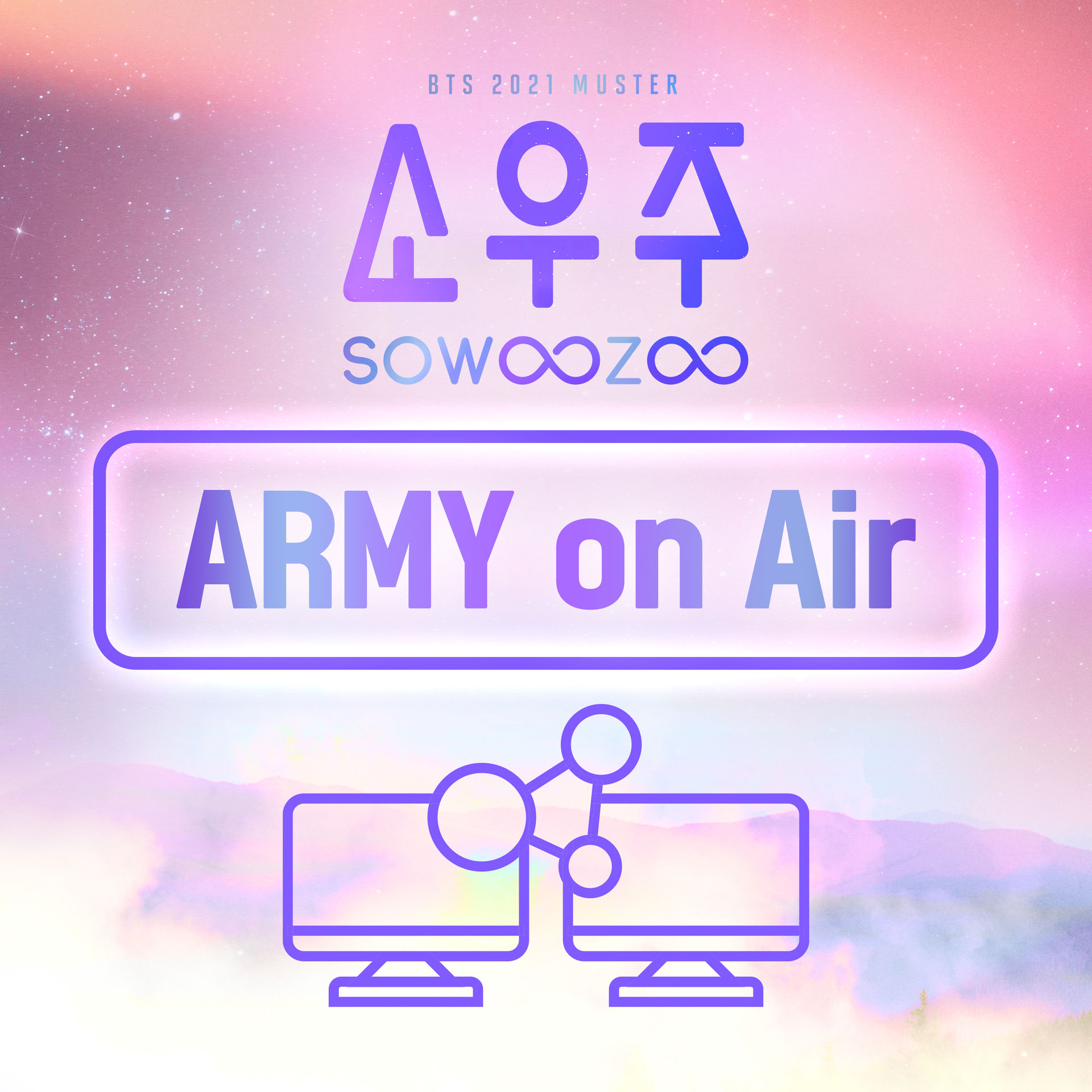 Lucky fans will be given the chance to be with BTS in the virtual event via ARMY ON AIR. ARMY on Air winners will be shown on LED screens during the live-streamed event.

The fan event is open to ARMY MEMBERSHIP HOLDERS who purchased tickets to MUSTER SOWOOZOO. Fans can send in their applications through Weverse from 4 June, 2 PM KST to to 6 June, 11:59 PM KST.

One week after the premiere, replays will be available for each show at the following time schedules:

The event is named after So Woo Zoo (소우주) the Korean title of their 2019 track 'Mikrokosmos' from MAP OF THE SOUL: PERSONA. 'Mikrokosmos' was the final song performed at the Love Yourself: Speak Yourself Tour.

We are shining brightly in our own rooms, in our own stars.
Let’s meet each other.
Check out the detail on #Weverse announcement page.

The news comes after the release of their new record-breaking hit single, 'Butter'.