Vocalist/bassist Zild Benitez quips as we sit with the members of IV Of Spades in the conference room at the new Warner Music Philippines office in Taguig to talk about their first full-length record CLAPCLAPCLAP!.

"Etong album na 'to siguro yung first time ko na may input ako sa songwriting. Pati si Badjao. Dati kasi si Zild and si Unique, (I think it's in this album that I had input in the songwriting for the first time. Even Badjao. Before it used to be just Zild and Unique.) " guitarist Blaster Silonga begins by explaining, until Benitez cuts him off, saying, "Ha? Sino? (Who?)" The three spiral into a fit of laughter. Benitez suggests that there should be a feud to "keep things relevant." Considering how young they are, the trio are well aware of how the media tends to sensationalize news and dissect anything and everything they do. They're so used to it that clickbait headlines have become jokes to them. Benitez pushes forward to pitch a ridiculous headline for this piece: "Zild [forgets] Unique. Amnesia?" The snickering ensues. 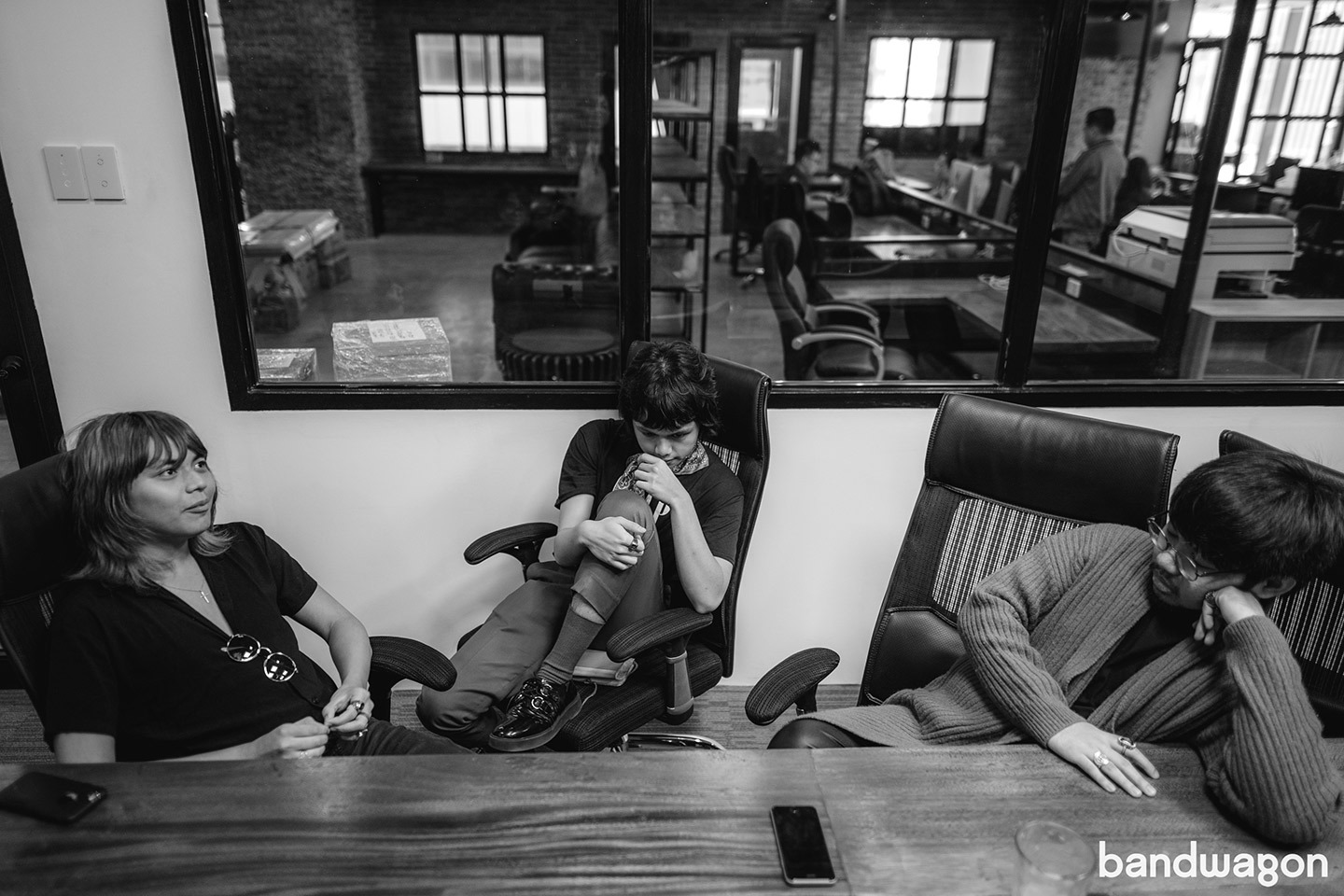 All jokes aside, though, they do recognize how their songwriting dynamic has changed since Unique Salonga’s departure from the band.

"Parang mas naging involved sila since we became a trio, (It seems like they've become more involved since we became a trio.)" Benitez says, adding that Silonga has since stepped up his game and pinning him responsible for the catchier songs on the record. "Etong album na 'to, super IV Of Spades. Lahat talaga involved. Lahat tinututukan yung ginagawa ng bawat isa. (This album, it's super IV Of Spades. Everyone is involved. Everyone paid attention to what each one is doing.)"

It was in July last year that IV Of Spades gave fans a taste of what would be CLAPCLAPCLAP! They'd since performed at the Pinoy Music Jam Festival in Dubai, made their Hong Kong debut at Clockenflap 2018, collaborated with Moira Dela Torre, and opened for Panic! At the Disco at the Mall of Asia Arena. Even if they'd carried on and Salonga had kicked off his career as a solo artist, the band still share a fondness for the singer-songwriter.

Benitez reveals that the original fold (sans Silonga, who preferred to focus on guitar work at the time) all pitched in to come up with melodies for their hit single 'Mundo.' It was 2015 and the end of 'Mundo' was the track's chorus until their producer pointed out how much potential the song has, where the chorus changed. They then faced months of revisions that brought them 12 different melodies to pick from to rewrite 'Mundo' to what it is today. Take it as training for the six months they spent writing and recording CLAPCLAPCLAP!

“Ang scary kasi dito, kahit na ito yung first album, ito yung “sophomore slump” namin if ever, kasi may narinig na yung mga tao so ang pinaka-challenge dito, hindi mo isipin kung paano mo ipi-please yung mga na-please mo nung una. At the same time, paano mo sila me-maintain kasi na-capture mo na sila eh. (The scary thing is, even though it’s our first album, it might be seen as our “sophomore slump” if ever because people have heard our stuff before. So the challenge is straying away from thoughts on how to please those who have already been pleased. At the same time, you want to maintain their attention, since you’ve captured them [as your audience] already.)” Benitez shares.

Since fans are already familiar with their funkier, disco hits, it does seem like the biggest challenge for the band was how to make their audience feel that they are still being true to their craft and intention and that they are producing music “for the sake of the music itself.”

Despite their fears, the 2.6 million streams of 'Bata, Dahan-Dahan!' on Spotify is proof that they still have their audiences' attention. Their new dynamic has given each member different roles in the band: Silonga as the one who's game for anything, De Castro as the judicial authority figure, and Benitez as the constantly indecisive one. 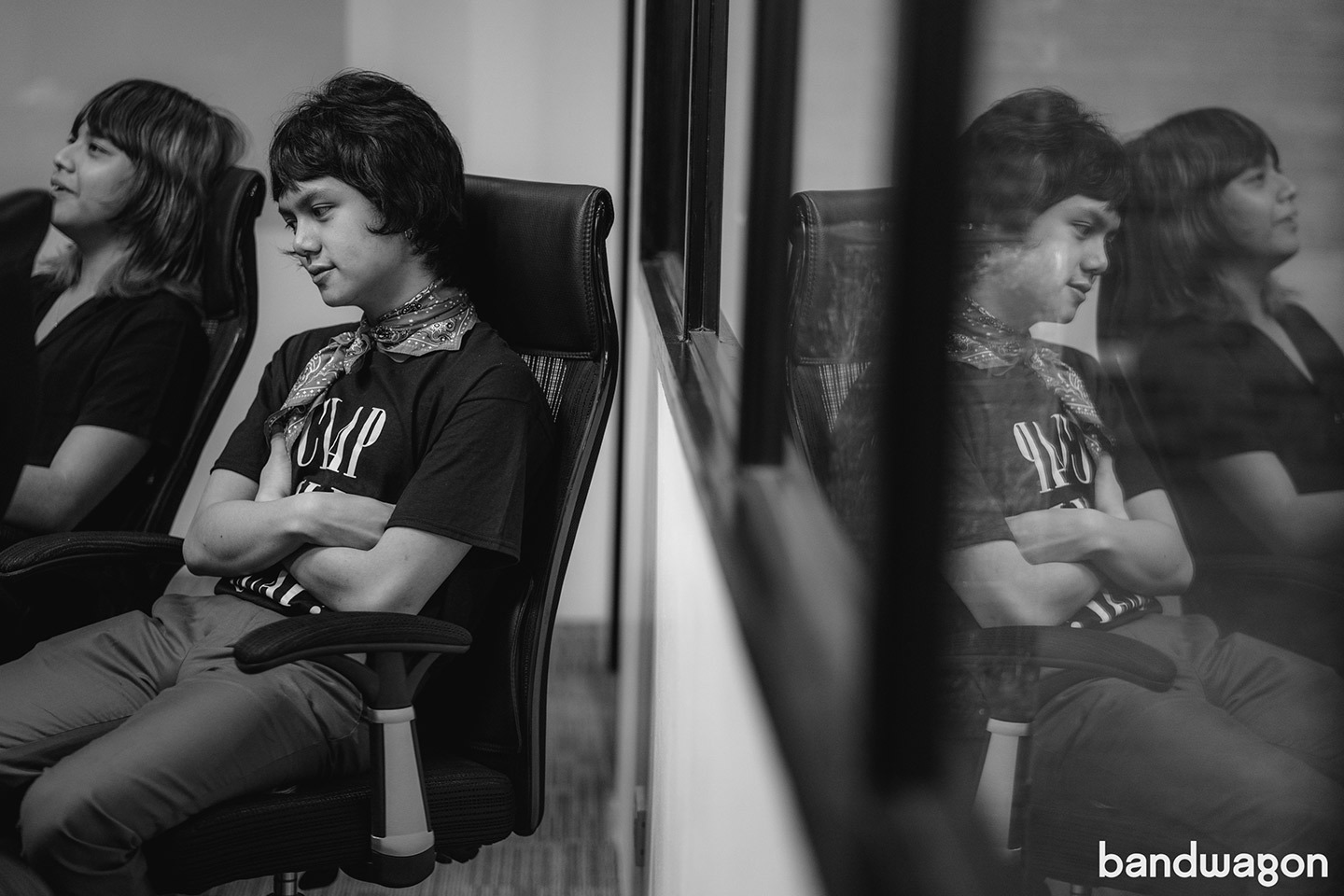 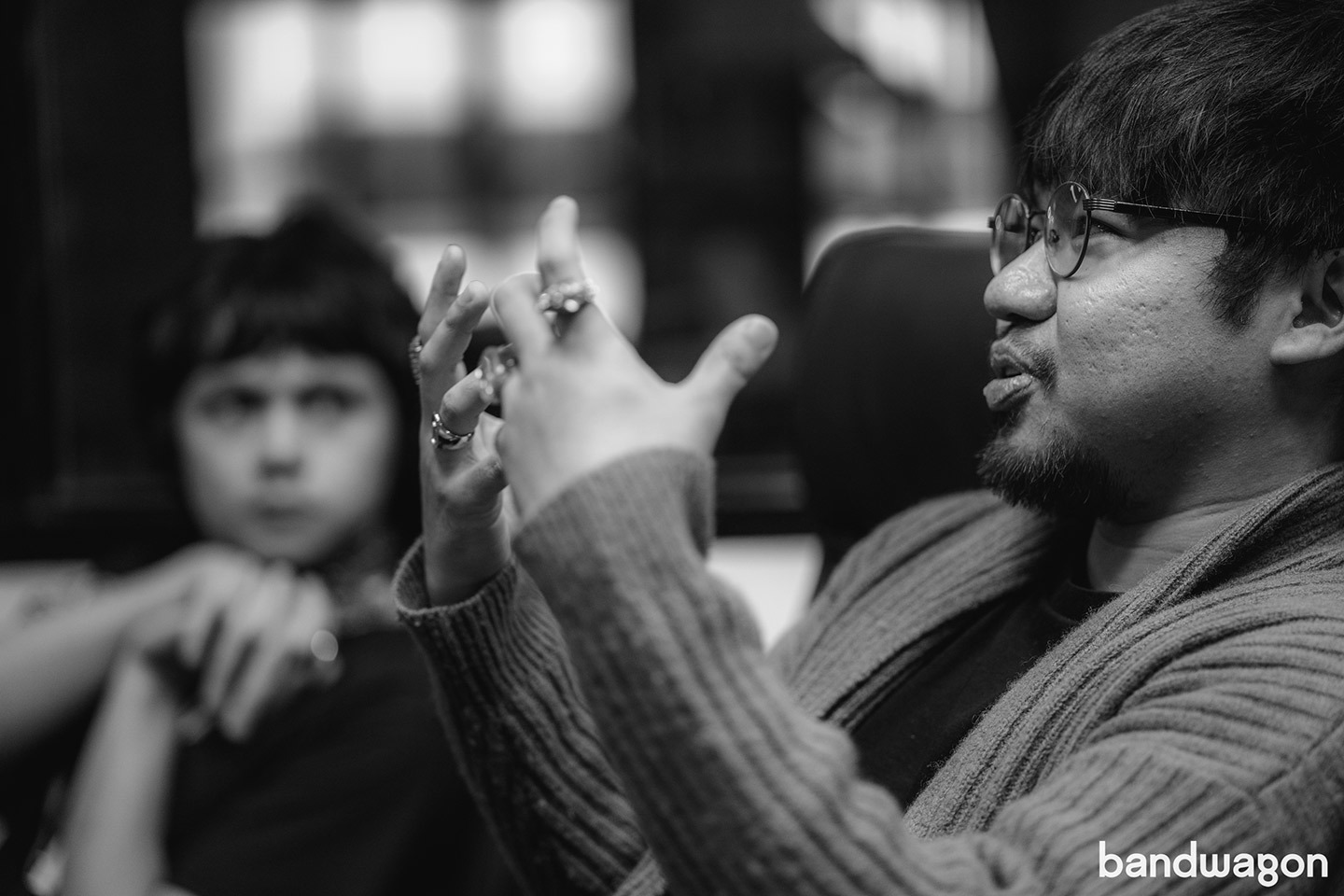 While songwriting may be relatively new to Silonga and De Castro, together, they co-wrote the heartbreaking track 'I Ain't Perfect,' while Silonga offered 'Come Into My Heart' and co-wrote 'Dulo ng Hangganan,' 'My Juliana, 'I'm a Butterfly' and 'Captivated' with Benitez.

In the studio, IVOS teamed up with Sonic State Audio's Brian Lotho during recording and Chrisanthony Vinzons for mixing and post-production. They worked on the album separately so they'd have fresh ears on the record and so both their ideas would help make the album shine. "Galing nila magwork together, (They work very well together,)" De Castro says. "Sila nag-push sa amin in terms of creativity. (They really push us to be better in terms of creativity.)" The trio even learned recording techniques from Lotho and Vinzons while in the studio. "Pati paano mag-drums sa recording. Kasi sanay ako sa live. Pero pag recording na, iba, (Even when it comes to playing the drums during recording. Because I am more used to doing it live. But during recording, it’s different.)" De Castro adds.

Speaking of recording, De Castro mentions how much he'd rather be alone than have Silonga and Benitez watching him. "Nagme-make face sila! (They make faces!)" He says. "Sobra naco-conscious ako. Hindi ko alam kung okay ba o ano. Eh dapat diba, pag nag-record ka, yun yung purest form mo ng sarili mo na dapat ikaw yun. Wala kang taong ibang iniisip dun. Kaya inaalis ko sila. (I get very conscious of what I’m doing. I don’t know if it’s okay or what. And isn’t it that during recording, you should be in the purest form of your self; your very nature. You shouldn’t be thinking of anyone else. So I ask them to leave.)"

It's only when he's 80% done with a drum track that he'd let the other two back in and ask for their opinion. “Kaya pag may sasabihin sila, gusto ko sabihin nila. (If they have something to say, I want them to say it.” De Castro adds. “Gusto ko honest din sila kung hindi okay. (I want them to be honest if what I came up with isn’t okay.)” 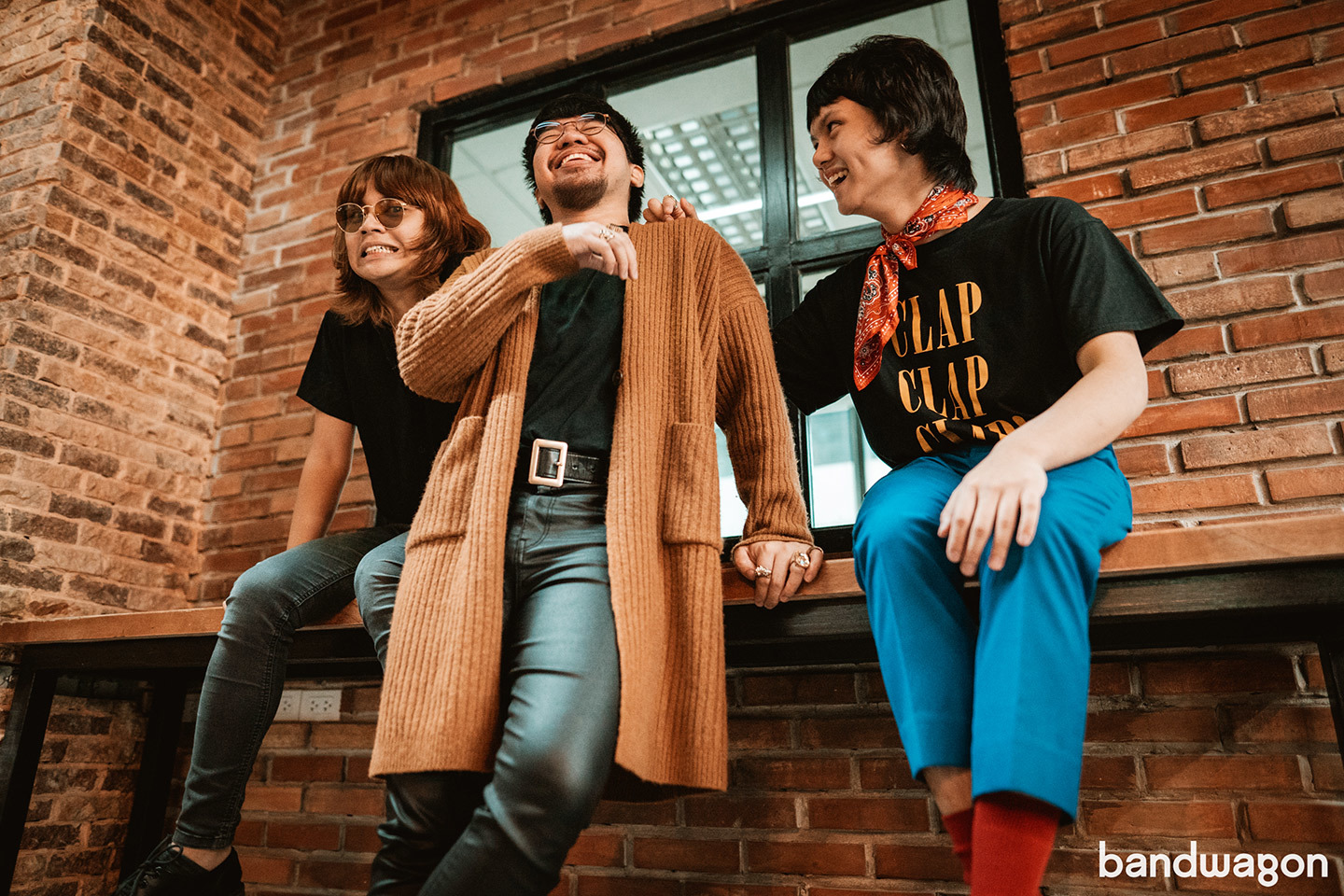 And just like proper cooks, IV Of Spades served up a scrumptious debut album with all the right ingredients and the time it needed to simmer. And as they've proven so far in the past few months, they'll definitely be serving up an entire spread of delights to keep their fans full for a very long time.

Here are some scenes from the band's album signing held last Sunday (01/27): 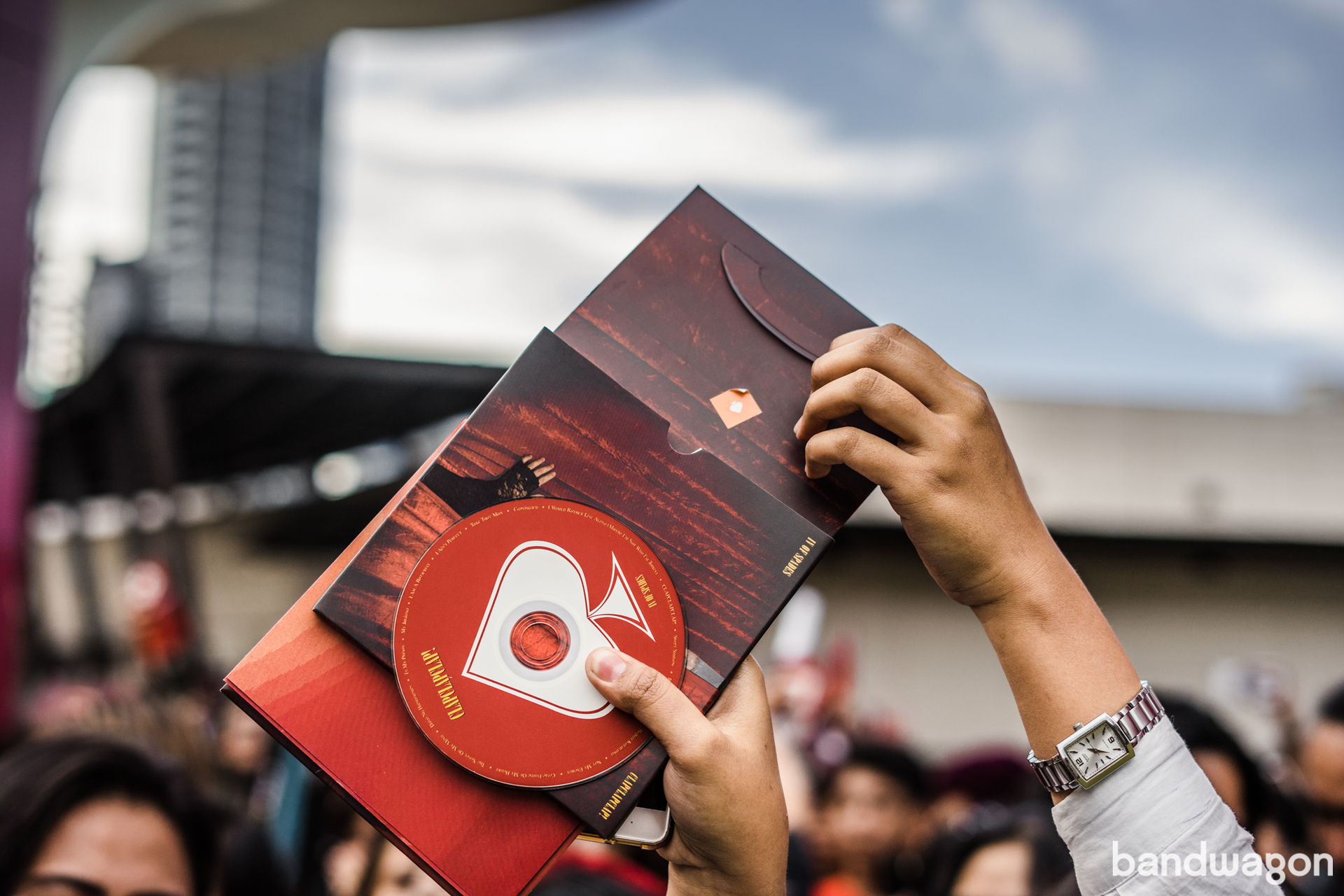 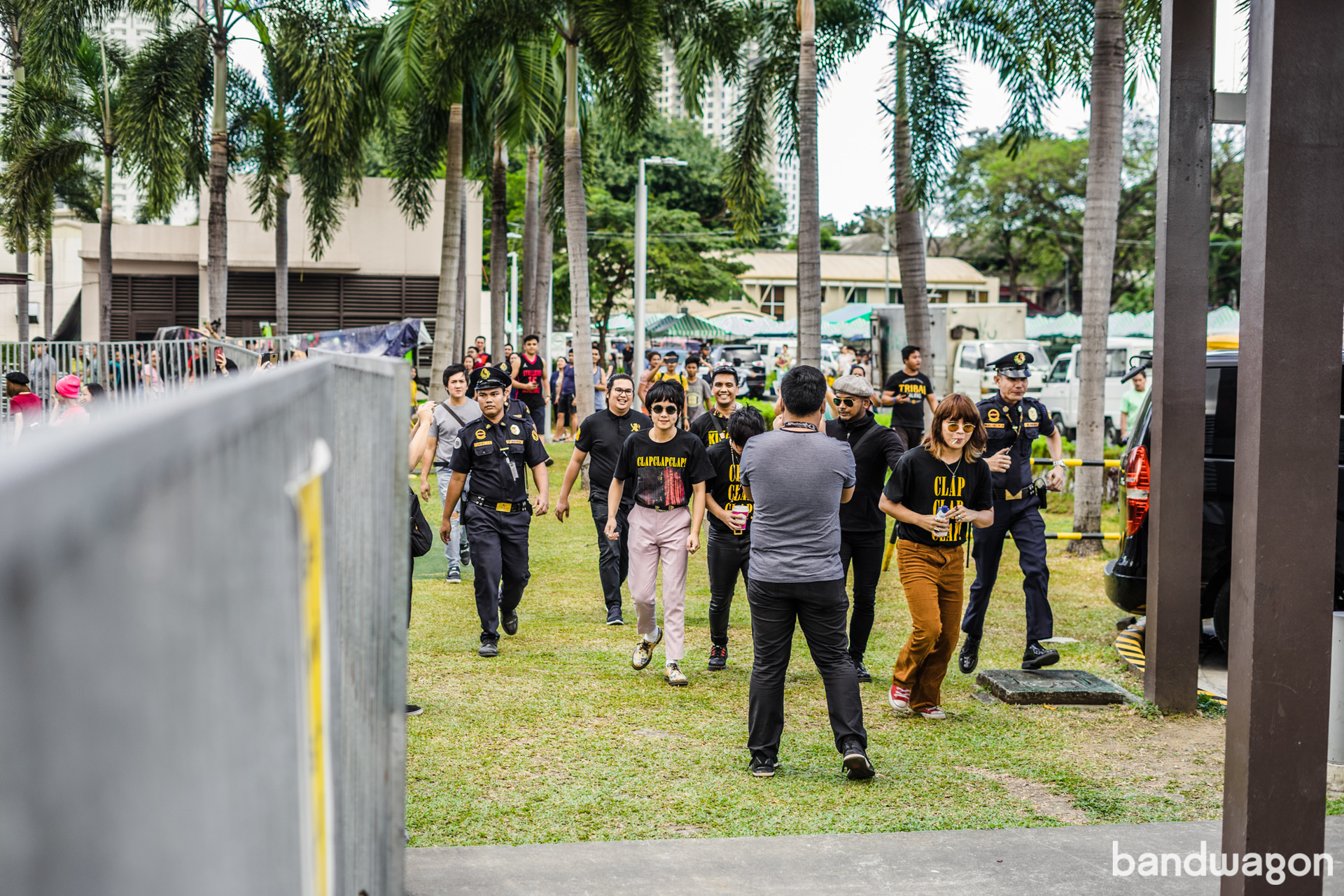 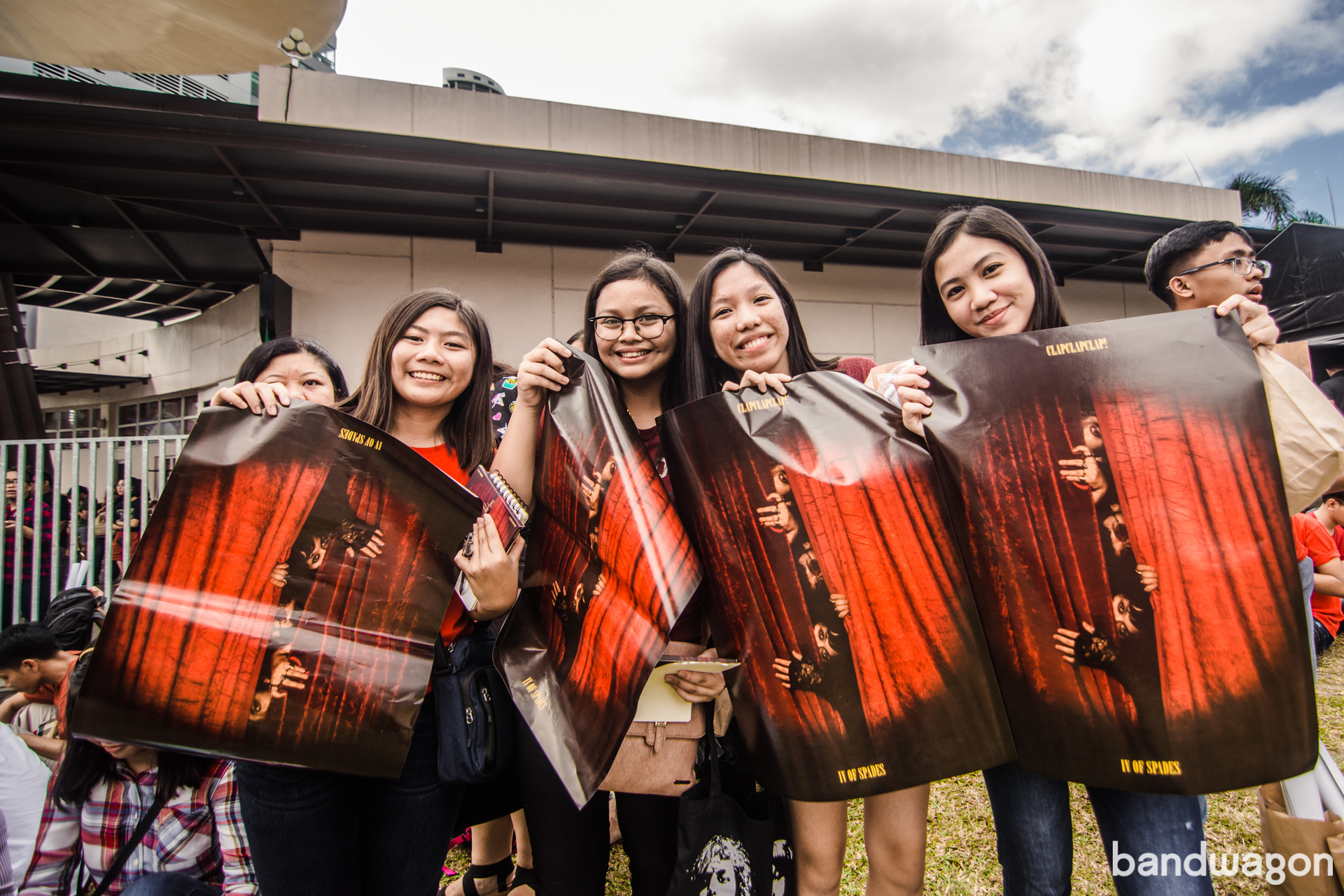 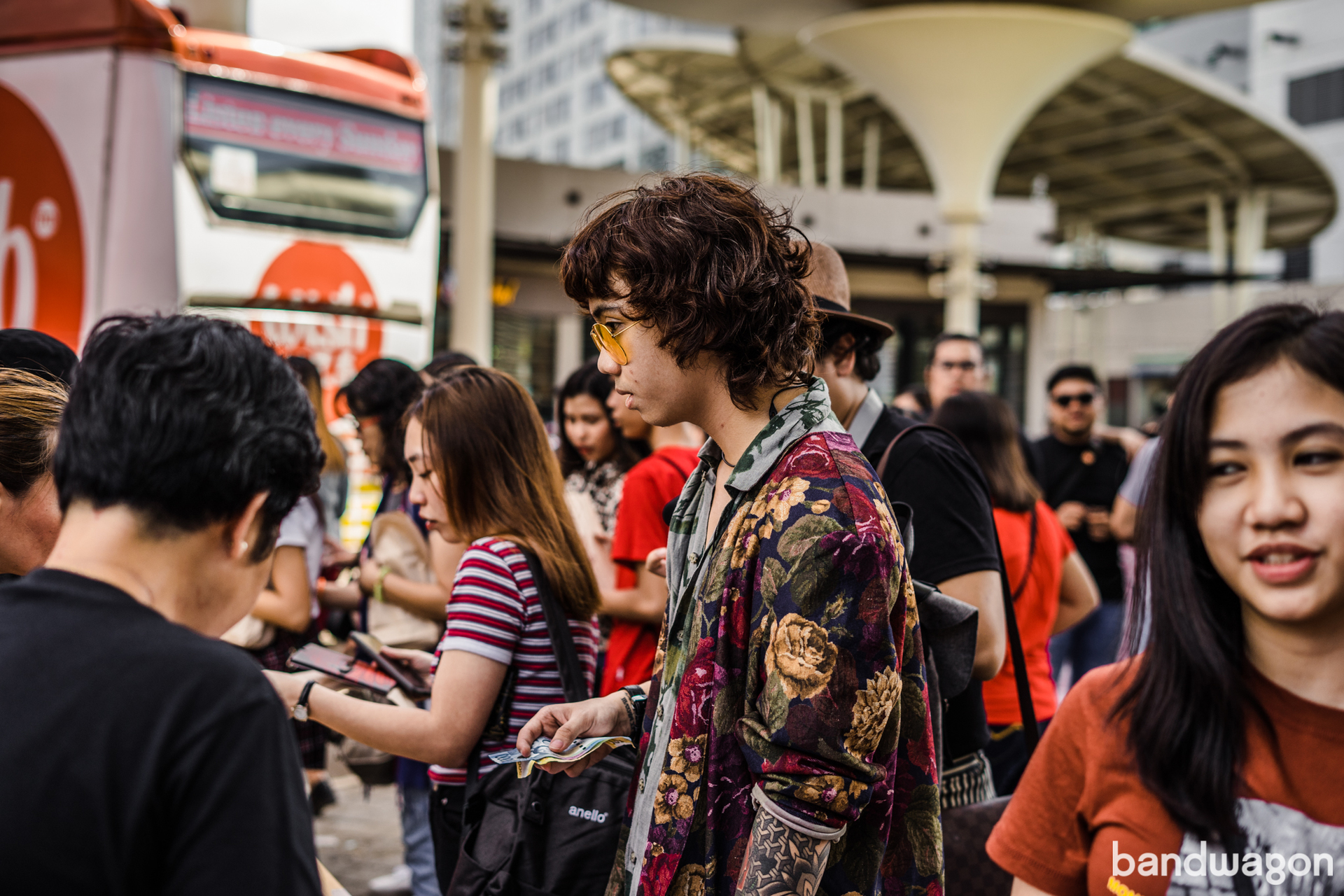 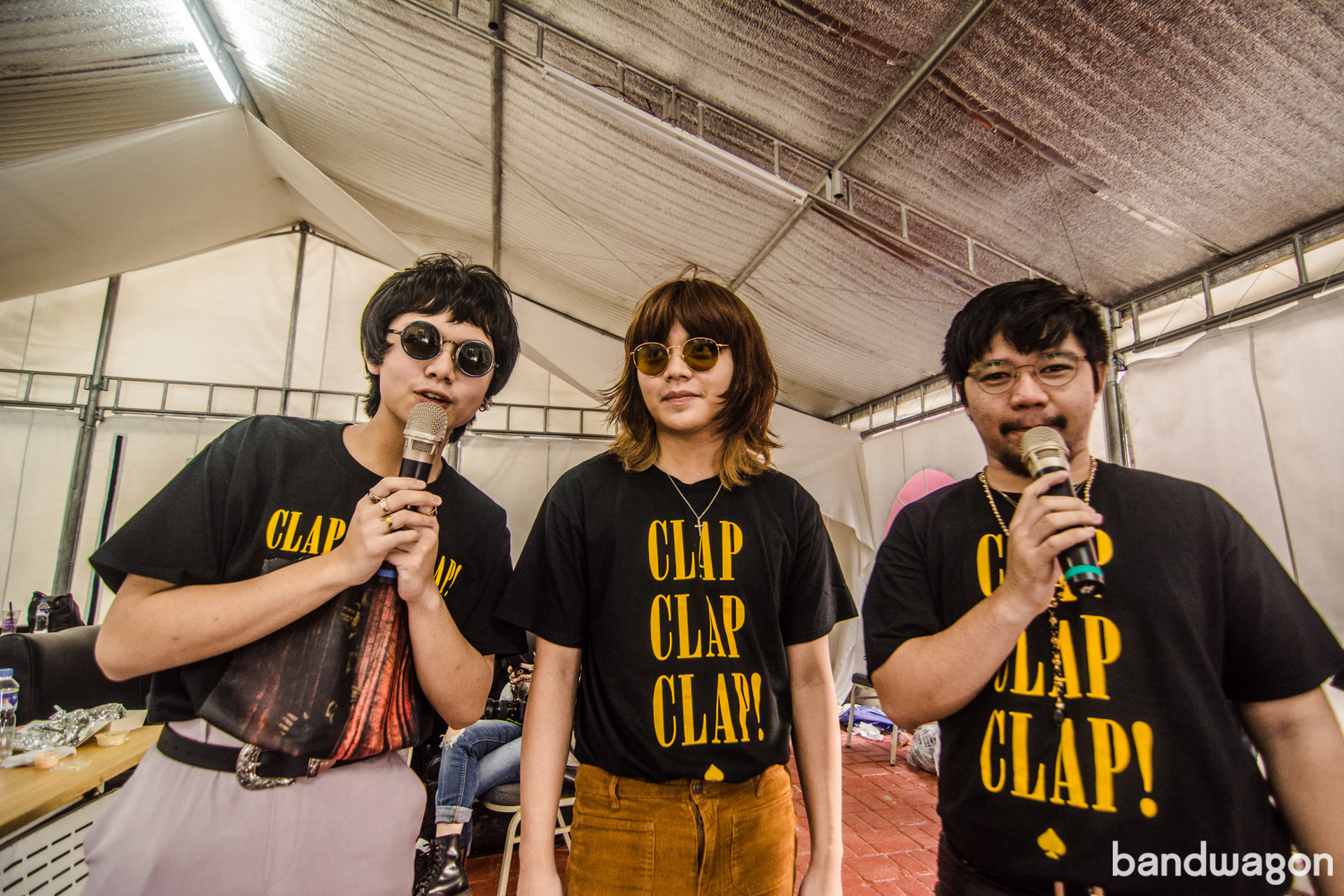 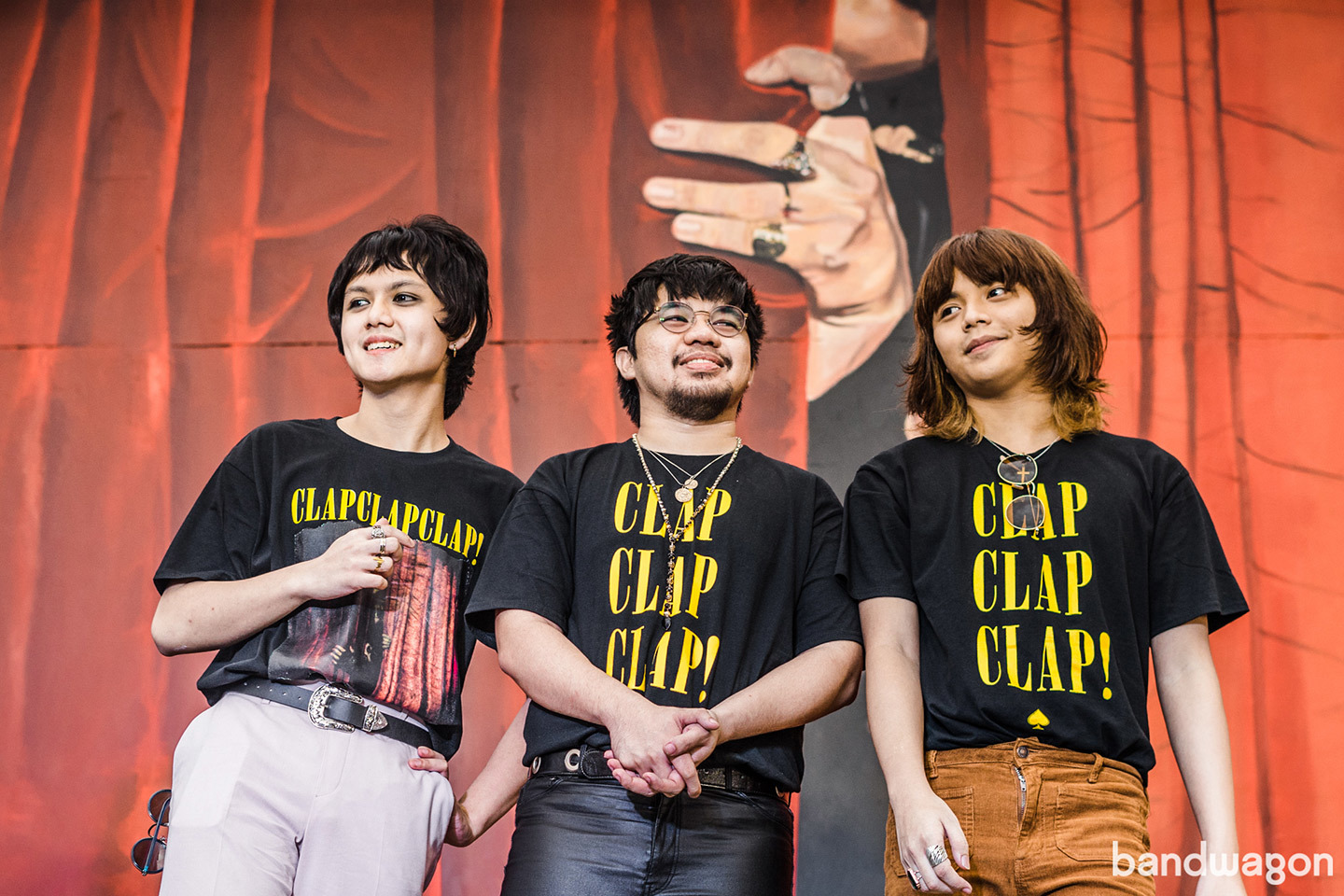 Special thanks to Warner Music Philippines.