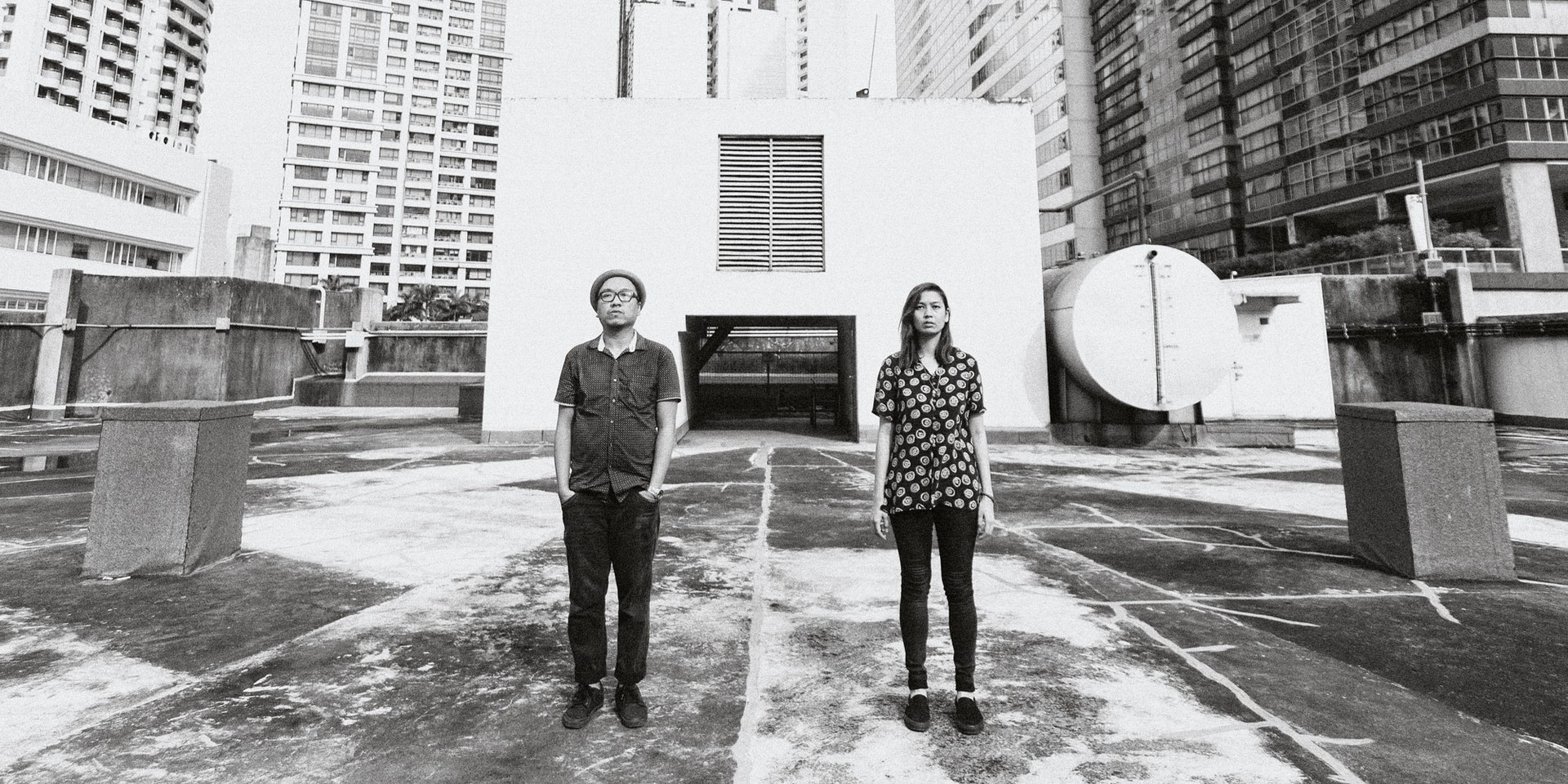 Pamphleteer's Collected Fiction arrived just in time for the rain.

From what started out as a fun project between officemates, the Filipino neo-folk act—fronted by Aldus Santos of The Purplechickens and Dee Cruz of Run Dorothy together with Jun Ballesteros, Zig Rabara, and Marco de Leon—now have eight stories to share with the release of their debut offering under Offshore Music.

"It’s called Collected Fiction because it’s literally a mixed bag of imagined narratives, of character studies, of sequence treatments to would-be radio dramas," Santos reveals to Bandwagon. "Thematically, the songs talk of how all memory is a sort of fiction, and how people in relationships both good and bad are, ultimately, unreliable narrators."

Produced and engineered by Audry Dionisio with additional engineering by Ely Buendia, Collected Fiction brought Pamphleteer down to Crow's Nest in Las Piñas for their recording sessions. "Audry was a total boss but also a complete angel as our producer; Ely meanwhile was the voice of conscience in those Safeguard commercials," Santos says, adding that working with Buendia has even led him to asking "What would Ely Buendia do?" for musically directed decisions, as if he were rocking a W.W.E.B.D. bracelet.

Luckily for the group, Collected Fiction was completed just before Metro Manila was put into quarantine due to the coronavirus pandemic. Santos feels that the propagative nature of art is a necessity, now more than ever. "I mean it doesn’t solve problems, but it sensitizes you to your humanity during times that force you to be unfeeling. So I don’t feel at all guilty, or out of place, releasing a record at this time," he says.

While the scene is forced to wait for a proper live show to celebrate the release of Collected Fiction, Bandwagon caught up with Aldus Santos and Dee Cruz to talk about the tracks off their debut offering and share some stories from the studio.

Aldus: Regret, betrayal, and hazy reminiscence in waltz time. I sing baritone here, which is the complete opposite of how I sang when I first started. Dee sings beautifully in it, and apart from technique, I think her sense of interpretation is a criminally overlooked gift. Writing-wise I was trying my hand at a natural kind of caesura, which is that poetic breath you take before a reveal, like singing “You’re so pretty” repeatedly, only to follow it up with “You’re so pretty terrible with this sort of thing.” Also, Marco [de Leon] had a rather maximalist approach in this; he’d overdub slide, tremolo, staccato, counterpoint, and tell me later, “Keep what you want to keep, man.” Such a generous collaborator.

Dee: I was shocked with Aldus’ extra-baritone singing especially at the start of this song. The way he sang here was very calming, and yet you can also hear deep breaths and sighs that evoke tension in the story. I also think that Jun, Zig, Marco, and Japo made the instruments in this song dance gracefully.

Aldus: This is perhaps the most sinister of the lot. It’s basically two assholes making excuses for their debauched behavior. There’s no romance here, just pure, criminal, biological need. But maybe that’s romance to some people? Anyway, I’m a big fan of Elliott Smith and those simple arrangements of his that has piano doubling the guitar line, so that’s what I asked Japo [Anareta] to do on keys. But around the bridge we wrote string parts that kind of meander cinematically; it’s so affecting you kind of start rooting for the assholes. Marco, again, plays like a king here. Such economy, such subtlety. The same can be said of Zig [Rabara] here, too. These are really mature players, and that’s not a reference to age.

Dee: I agree with how Aldus described this song; these are mature people who deliberately made bad decisions. Anyway, I think Marco’s guitar riffs give it such a mood which is already apparent at the beginning of the track. But I also like how Japo’s synth parts seem to validate the bad decisions as the song wraps up.

Aldus: This was a last-minute addition, a song I’ve had lying around for a bit. It’s so last-minute I was cramming lyrics to a new section over breakfast, the morning of the session. I love how our bassist Jun [Ballesteros] stepped up to the plate and went full-on McCartney on this one, simply because there was all this sonic space to fill, and I kind of did not want guitar solos in it, just acoustic guitar and harmonica. Structurally it’s not for short-attention-span types; it’s basically a tribute to early Dylan folk, meaning it’s all verses strung one after the other, kind of like 'It’s All Right, Ma (I’m Only Bleeding).' The lead line (“She was a good waitress, she could carry eight drinks”) is a paraphrase of a line from Louise Glück’s poem 'Siren,' hence the title.

Dee: Aldus hummed this to me a couple of times, even before we thought of finally recording anything and I immediately loved how bright and hopeful it sounded. On the day of our scheduled session, he called me in the morning and asked if Miggy [Abesamis] can play the drums for this track. So while Miggy and I were on our way, Aldus sent a rough recording of the song from one of our practices and some new lyrics for me; we basically rehearsed and memorized everything on the road. We arrived and were only able to practice for literally just ten minutes along with Migs [Querubin], who also did additional percussion for this track and they both played it effortlessly, like they knew the song by heart. Anyway, I really love how this song ended with a choir which was just Jun, Aldus, and I singing together inside the booth. Good times.

Aldus: Dee and I usually take turns at the mic, but here it’s mostly just her while I interject in the choruses. Thematically it’s kind of akin to The Purplechickens’ 'Casanova' in that they’re both written from the perspective of the one pined after, not the one doing the pining. In an early version, the burden of establishing the emotional crescendo rested on our singing alone (we were performing as a duo), but now all that weight is evenly distributed across all players. You can hear it in the outro, where Marco wails in between the pockets of Zig’s beautiful fills.

Dee: The angle of this story is a breath of fresh air, at least for me, but I guess not for Aldus since he already wrote 'Casanova.' Haha! Singing most of the parts, I made sure I was able to interpret it properly: being the one admired but is still longing for something. You’ll hear Jun’s bass parts singing along with the acoustic guitar and almost empathizes with my loneliness in this track.

Aldus: This is basically the song that started it all. I asked Dee to record harmony and a verse for an early version of it. And when I listened to the mix, I was instantly roped in by her performance. I can’t explain it, but it was perhaps a tonal affinity, meaning in simpler terms that our voices made sense together. I loved her voice so much that I rewrote the rest of the songs I had and turned them all into call-and-response, banter-based songs. I loved recording this as a player, too; in it I do that hammer-on thing Neil Young does in songs like “Tell Me Why” and “The Needle and the Damage Done.” And naturally I do my damn best to play Neil-style harmonica in it, too. Other things to note: Jun sings third harmony, and Marco does some tasty fretwork tap-dancing in the latter half.

Dee: Ahh, the song that made me want to hear more of Aldus' material. How he could sing every line so careful and vulnerable somehow struck a chord with me. That's why it made me so excited when he invited me to demo this song with him! Even if we were singing different lines at the same time, it just sounded right. It was literally a pas de deux.

Aldus: We usually close with this song in live shows, and for good reason; all the uptightness, all the emotional sleuthing that you sense in the rest of the record, they’re basically absent here. It’s pure unadulterated release. If this song were, like, a real-life situation, it’s that awful scene you make in public out of sheer desperation: there’s screaming, there’s ugly-crying, maybe an injury or two. With a few shots in me at a show, I can conjure that sort of rapturous energy, but during the session, I was all clammy hands and crippling self-doubt. Fortunately, I was working with complete pros, both bandmates and people manning the booth. That said, though, singing your most demanding song in front of Ely Buendia is like shooting hoops in front of Michael Jordan.

Dee: This track has a lot of energy to it, that’s why it was usually our last song in every show we played, like what Aldus mentioned. Our harmonies were very simple but I think the quick-shifting of emotion along with the instrumental parts that Aldus, Jun, Marco, and Zig wrote gave it its unique power.

Aldus: This, quite literally, is a slice of historical fiction. In it, I imagine what Bob Dylan and Joan Baez— who dated each other in the early ‘60s, only to unceremoniously call it quits a few years after—would tell each other after major upheavals in their personal lives. Basically, it’s Bob telling Joan about Sara Lownds, the inspiration behind 'Sad-Eyed Lady of the Lowlands,' whom Dylan married. I know Bob asked Joan to be part of The Rolling Thunder Revue in the mid-1970s, and I’ve always wondered how that conversation went. Obviously now I sort of know, because Marty Scorsese made a docufilm about it for Netflix in 2019. I’m glad I didn’t catch this before writing the song, because I would have owed a great debt to details. Again, this song isn’t so much about them but people like them, because ultimately none of it is true in the Dylan-Baez continuum.

Dee: I really didn’t know much about Dylan and Baez’s backstories until I read the lyrics to this track and made me interested about their lives. Their “love story” was real, I mean we can all see it happen to anyone and Aldus wrote artistically with such imagination, like how you’d think Bobby and Joanie would write it themselves.

'MY LOVER IS NOT MY LOVE'

Aldus: The barest of arrangements, strangely fitting as a closer for an album of this sort. I wanted a rousing gospel vibe for this when I first wrote it, but I felt differently about it a year after. Now I feel great about it as a guitar-and-voice number. It also needs to be stressed how our producer Audry [Dionisio] is one hell of a collaborator, always purposeful but also, like, cheerleader-like whenever the need arose, which was a lot of the time. Dee sounds lovely here as always. Also, Migs Querubin (Fools and Foes) plays Kings of Convenience-style guitar in the interludes.

Dee: I loved how this last track ended up. It was made simple with just guitars and voices that are almost whispering. It’s just there, so bare and so ready to tear you apart while nearing the end of this record.

Pamphleteer's Collected Fiction is out now via Offshore Music.