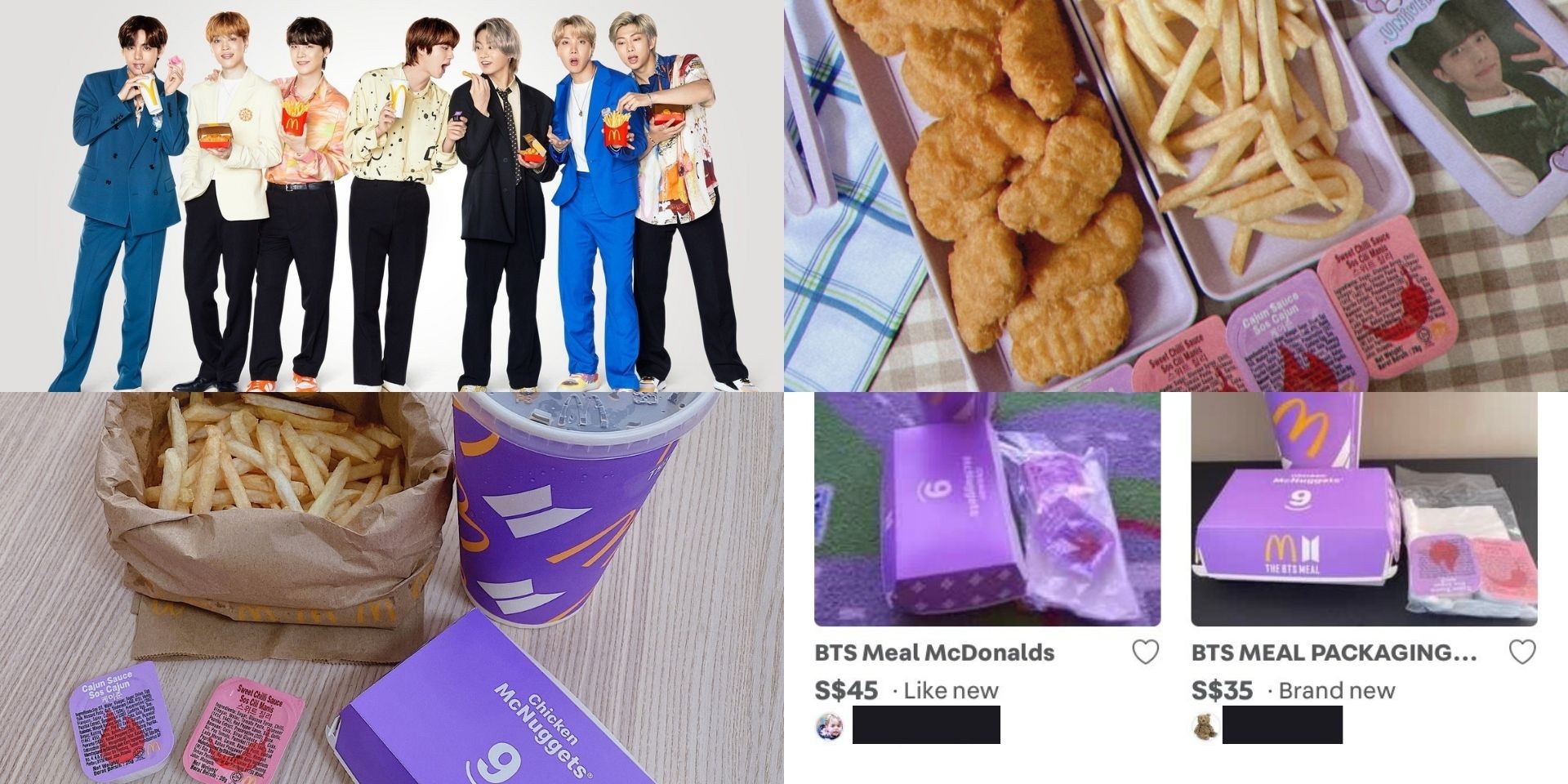 After a gruelling wait and an unfortunate postponement last month, ARMY (fans of BTS) in Singapore can finally get their hands on the highly coveted BTS meal.

The BTS Meal is arriving in Singapore, only available via delivery: here's all you need to know

The long awaited meal finally debuted here on 21 June (11AM SGT), much to the joy of local fans. Although only available via delivery, this was nevertheless going to be an exciting and almost spiritual experience for ARMY in Singapore.

Especially after the highs of BTS' 8th anniversary celebrations FESTA 2021—which included the recent MUSTER SOWOOZOO concert—and the launch of the BTS POP-UP: SPACE OF BTS at Funan, getting the BTS meal is a perfect moment for ARMY to treasure despite the ongoing pandemic.

Placing an order for the meal can be done via three apps: McDelivery, GrabFood, or Foodpanda. On the McDelivery app, you'll be immediately directed to a virtual queue. 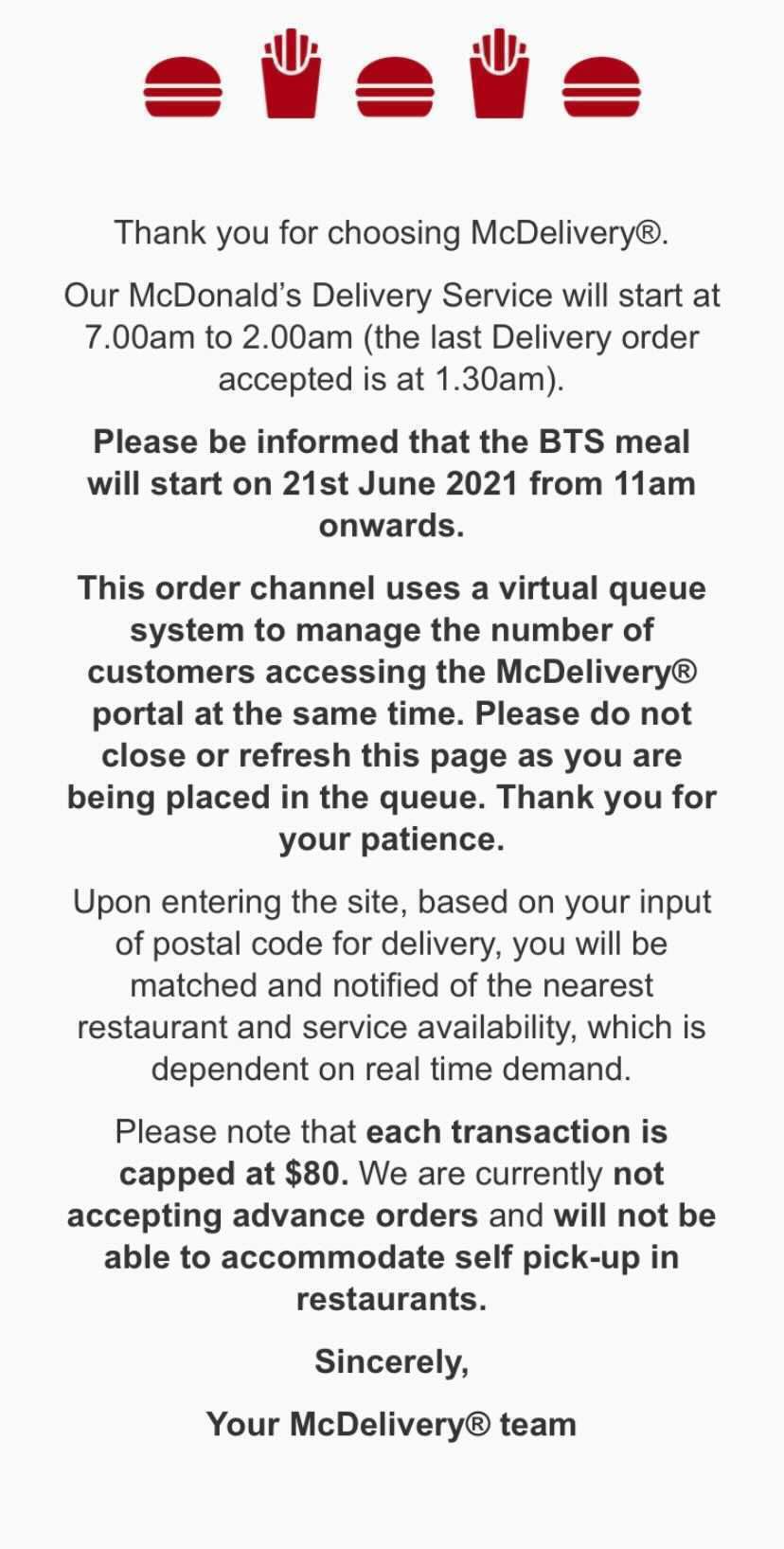 Once it reaches your turn, you'll be able to enter the menu screen and place an order from your nearest McDonald's, with a maximum limit of $80 per transaction. 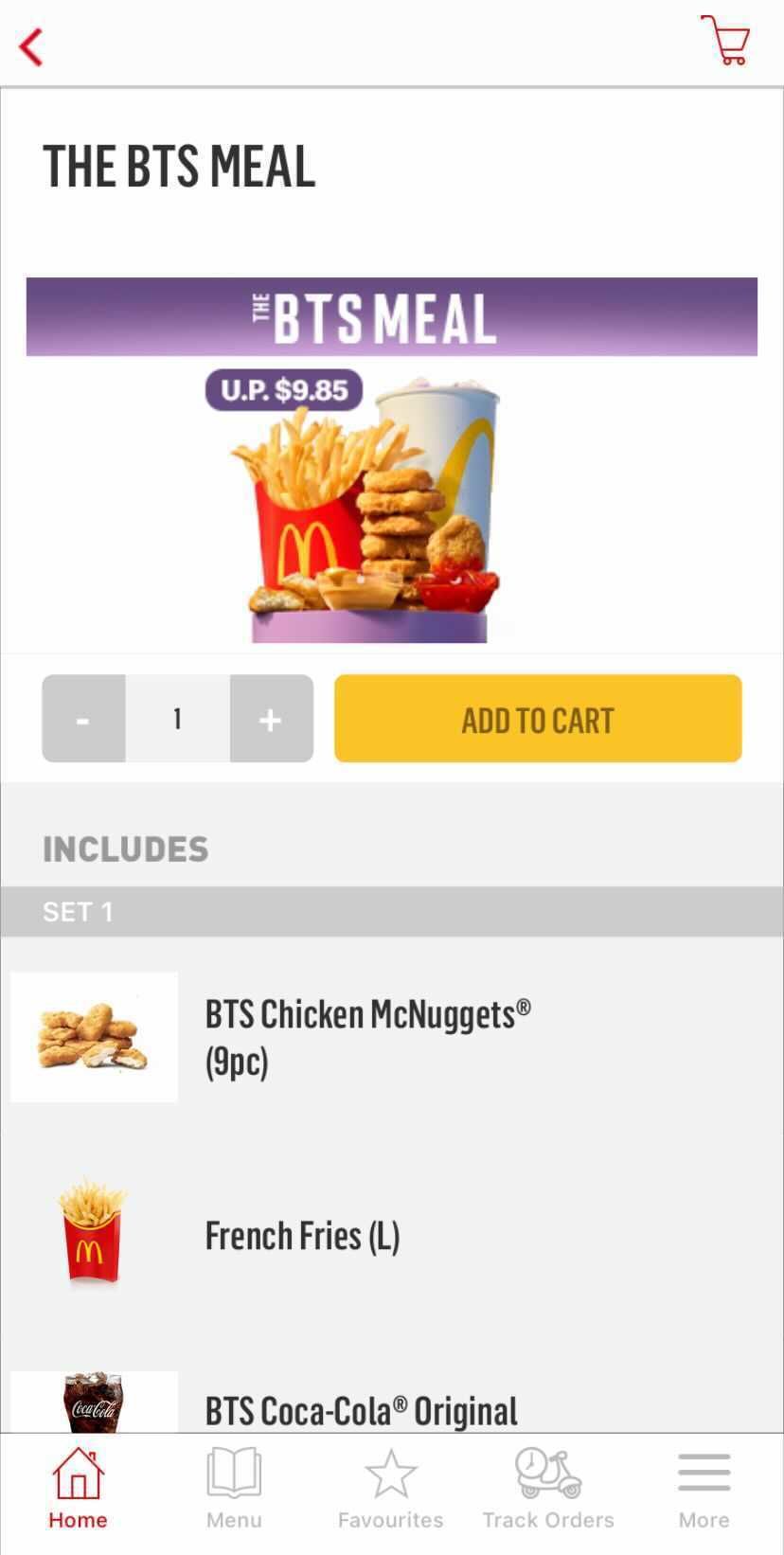 The McDelivery app also included a link to a playlist curated by McDonald's Singapore, where fans can stream their favourite BTS tunes while waiting for their meal. Additionally, because ARMY could not purchase the meal in-store, the app added an AR feature for a limted time. Titled 'On Set With BTS'. you can go backstage with the seven members and explore exclusive content with 360-degree views.

However, much like the launch in Indonesia or Malaysia, not all was smooth-sailing on D-Day here. Some fans reported that the meal was already unavailble on GrabFood even at 11AM, while others compared the purchasing experience as akin to the mad rush of buying concert tickets.

What?! The BTS Meal and Oreo McFlurry sold out at 11am?! Right after orders were opened!

Online queue for the #BTSMeal in Singapore….. feels like we’re fighting for concert tickets here 😭 pic.twitter.com/JCPqfSOjG1

Some were able to get the meal fairly quickly within an hour of ordering, but others had to scramble around different food delivery apps to finally make their purchase.

After 50 mins of trying all the different online delivery platforms, I finally managed to put in my order for the #BTSMeal through Grabfood. It’s the first day for the promo (and it’s only available through delivery) for SG Armys and I’m so excited!!!!

Moreover, other hiccups also made the experience less-than-pleasant for some. A small minority seemed to have been unable to get the special edition sauces, and many other fans could not purchase the meal as it had reportedly sold out by around 2PM.

Priced at S$8.90, the Singapore edition comprises nine-piece Chicken McNuggets, one large-sized fries, one large-sized drink, along with the special edition sweet chili and cajun sauces. Unfortunately, it did not come with the BTS logo-imprinted paper bag that other global outlets provided.

My first McDonald’s meal of the year goes to #BTSMeal 💜💜💜 pic.twitter.com/fuSSV8ug7a

One of us at Bandwagon was fortunate enough to secure the meal within an hour of waiting, and here's our taste test. 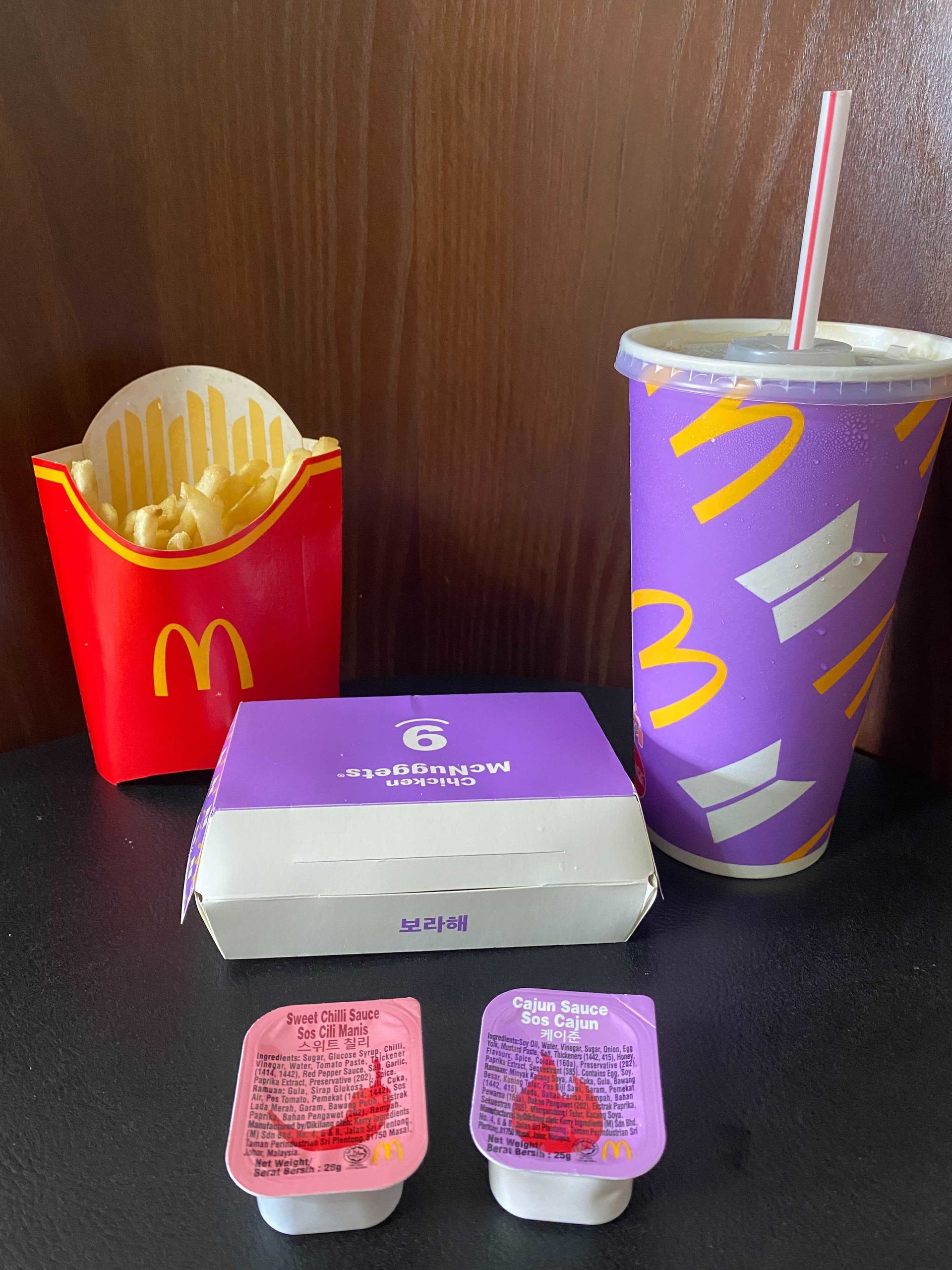 Overall, while the Chicken McNuggets were pretty decent, they were standard McDonald's fare that was nothing to shout about. However, the sweet chili sauce was a clear winner, with a perfect balance of tangy and sweet flavours that gave the meat just the right amount of kick. On the other hand, the cajun sauce was smooth like 'Butter'—as one would say—and veered closer to spicy mayo or honey mustard-types of flavours.

Despite the lack of the paper bag adorned with the BTS logo, the food packaging still came in the pop giants' signature bright purple hue.

Just like the BTS meal-related scalping in other countries, the Internet soon flooded with Singaporeans reselling the packaging and the unopened sauces on e-commerce sites like Carousell.

rushed to wash everything so i could preserve it but kinda upset that McDonald's Singapore doesn't have the purple paperbag :( #BTSMeal pic.twitter.com/2hgFHLt1QV

Much like their neighbours in Malaysia and Indonesia, ARMY in Singapore had anticipated a surge in demand for the meal at McDonald's outlets across the island. Some fans have taken the initiative to write thank-you notes and provide extra tips or snacks for food delivery personnel.

Glad that the meal is here finally.. Sadly no bts logo paper bag... haiz .Still thankful.. Panda no tipping so i gave a small snack for appreciation 💜#btsmeal pic.twitter.com/X9eg6XKs2b

Finally I got BTS Meal 😭😭

And I give foodpanda delivery man a small token of appreciation a packet drink and thank you note ☺️💜 #SGARMYspurplesU pic.twitter.com/PVi2OyLRmP

💜💛SPONSOR-A-BTS MEAL💛💜
We have completed our orders to NCID & NSTC. We will post full updates tmr once all beneficiaries have received their orders.

In the meantime, here are photos of the last batch of orders arriving at NSTC.

Additionally, McDonald's Singapore has also sponsored another 2,000 BTS meals for Changi Airport workers in Zone 1, which is deemed as the highest-risk area within the airport.

Special thanks to our bestie, @McDonalds for sponsoring 2000 sets of #BTSMeal for our frontliners at Zone 1, ONE Changi @ChangiAirport.
This spirit of giving back is certainly strong in our little island. 😊 🏝💜💛
Cr. Riech⁷ pic.twitter.com/gXFC30DwcH

Soon after its long awaited arrival in Singapore, the local corner of the Internet was populated with memes about the BTS meal.

Tryna get our hands on that Dynamite BTS meal be like 😭

jk jk 🤪 This 'Endless Ladder' test ensures our frontliners' operational efficiency, so that our fire and rescue operations go smooth like Butter.

A post shared by your favourite SG meme page (@memedefsg)

Check out the behind-the-scenes of BTS' advertisement for the iconic meal below.