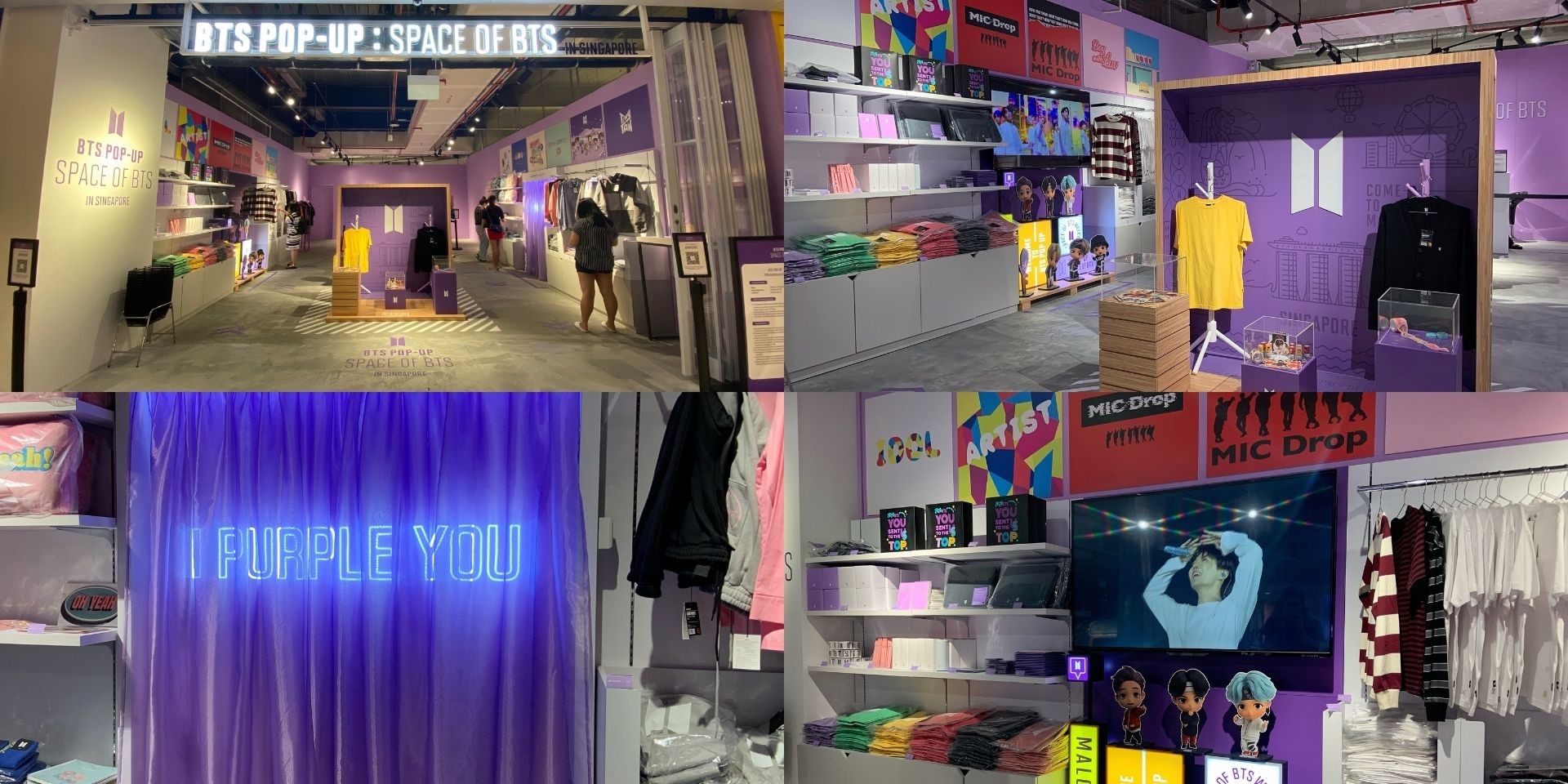 Continuing their never-ending streak of success, 2021 has been a whirlwind of a year for BTS thus far. ‘Butter’—their second English-language single and follow-up to the 2020 smash hit ‘Dynamite’—shattered numerous records upon its arrival, including the biggest global debut of all time on Spotify. The pop titans also bagged four awards at this year’s Billboard Music Awards, and recently launched the BTS Meal across 50 countries. If anything, the Korean mega-stars are more unstoppable than ever.

BTS and McDonald's team up for another merch collection

In tandem with the group’s recently concluded 8th anniversary celebrations, the highly successful BTS pop-up stores have made their long awaited return to Asia, including Singapore. Opening from 28 May to 15 August at Funan (#02-13), SPACE OF BTS will be open from 10AM to 10PM daily. The store follows the Map of the Soul pop-up that ran in Plaza Singapura from November to April this year.

Hi Singapore, we are finally back! 💜
Check out information, admission & purchase notice for BTS POP-UP : SPACE OF BTS in SINGAPORE.
We can’t wait to see you!

With its purple-washed walls and BTS-themed pop art scattered across the store, this month’s pop-up sees a more downsized and minimalist design compared to that of Map of the Soul. 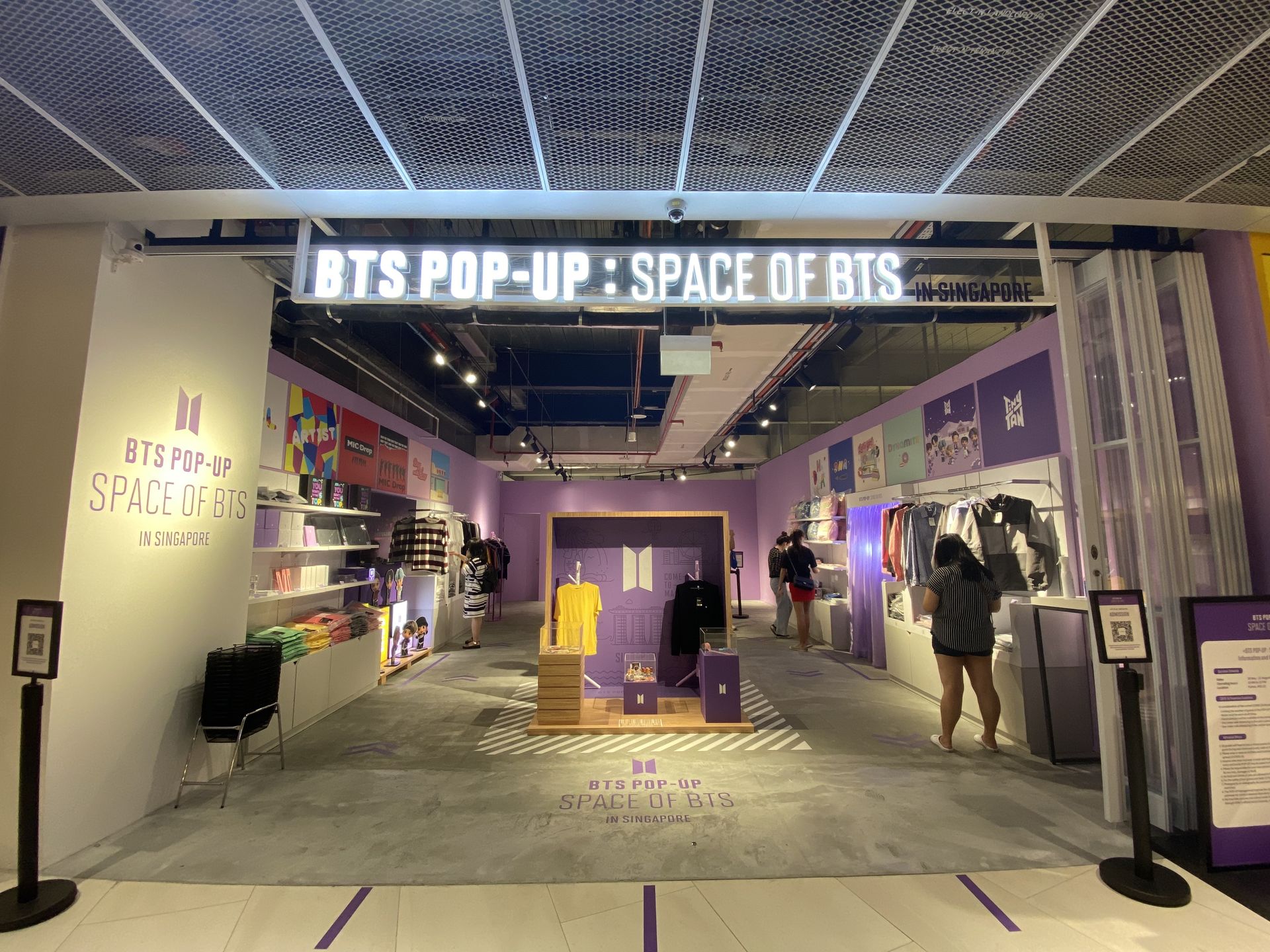 Yet, SPACE OF BTS would undoubtedly catch the eye of any ARMY (fans of BTS) who walks by, especially with the BTS logo smacked right in the centre of the storefront display. 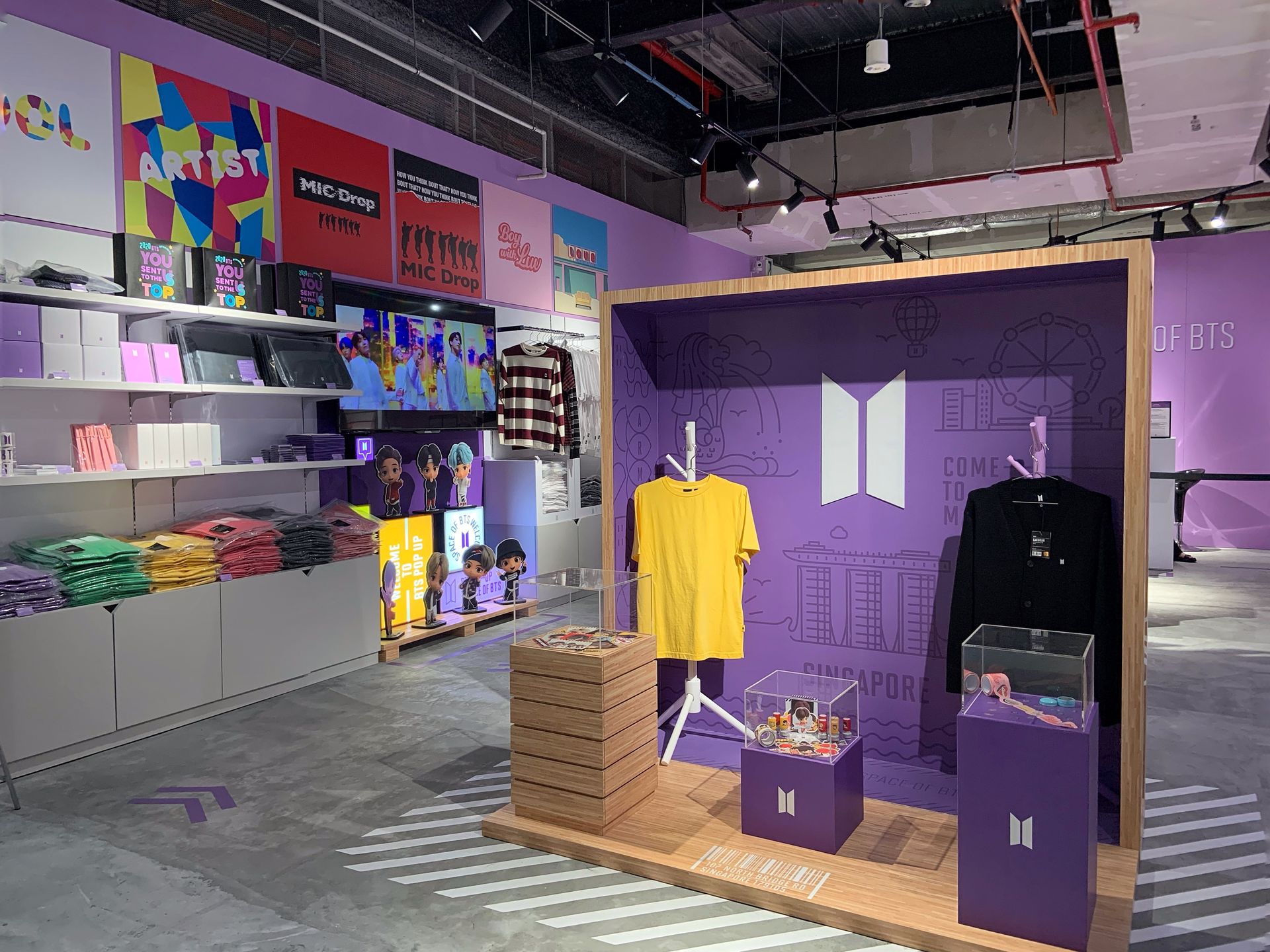 As you venture inside, it’s clear that the stars of the show are TinyTAN, the K-pop group’s popular animated character series. Aside from the tons of merch that are adorned with TinyTAN designs, there’s also a section on the left that features a TinyTAN display along with a TV screen that loops BTS concert footage and music videos. 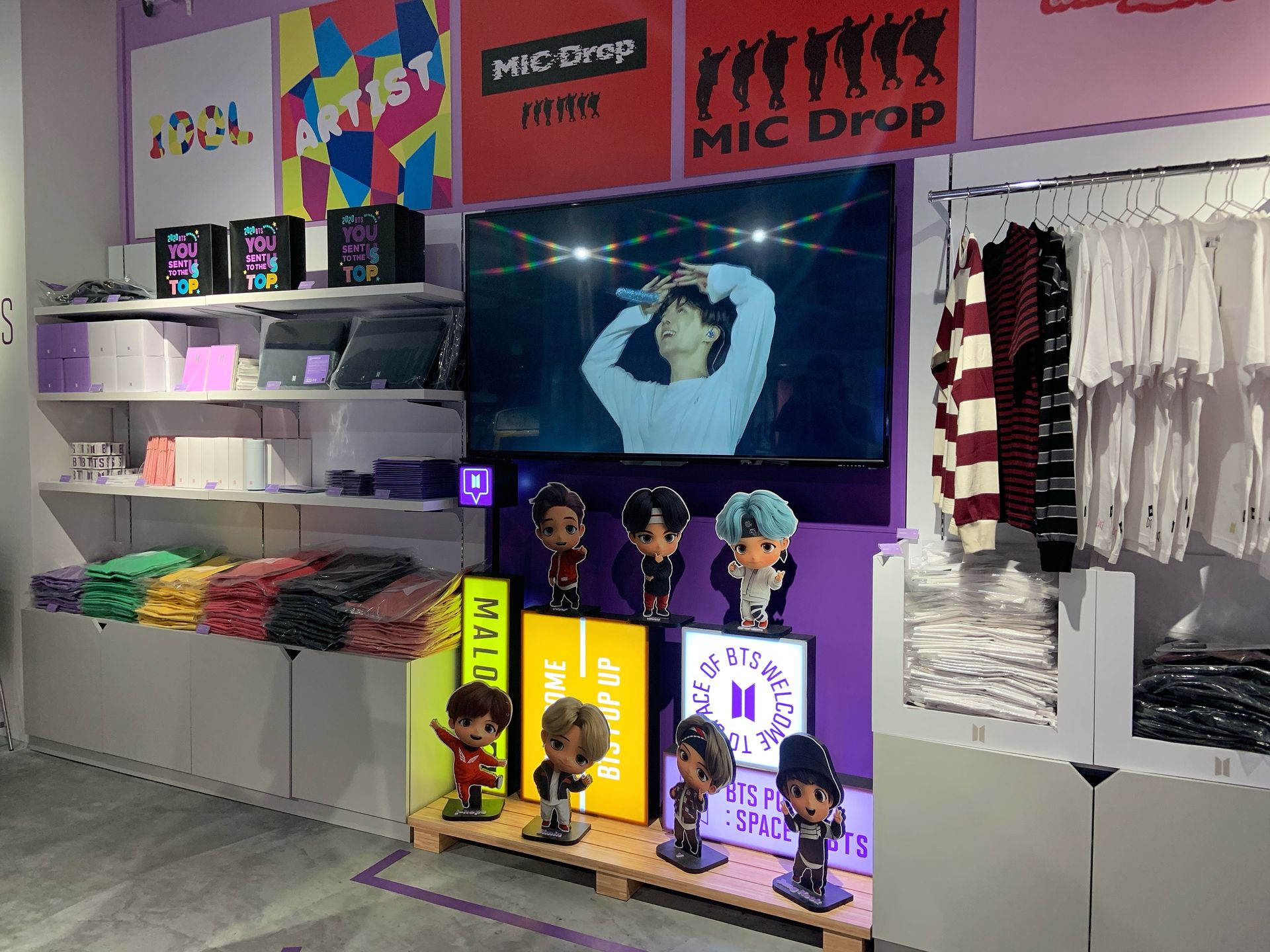 The goods in the pop-up range from fashion to stationery, lifestyle items, and homeware. Mugs, stickers, and even hair rollers adorned with TinyTAN designs were extremely popular, with half of the mugs already sold out. 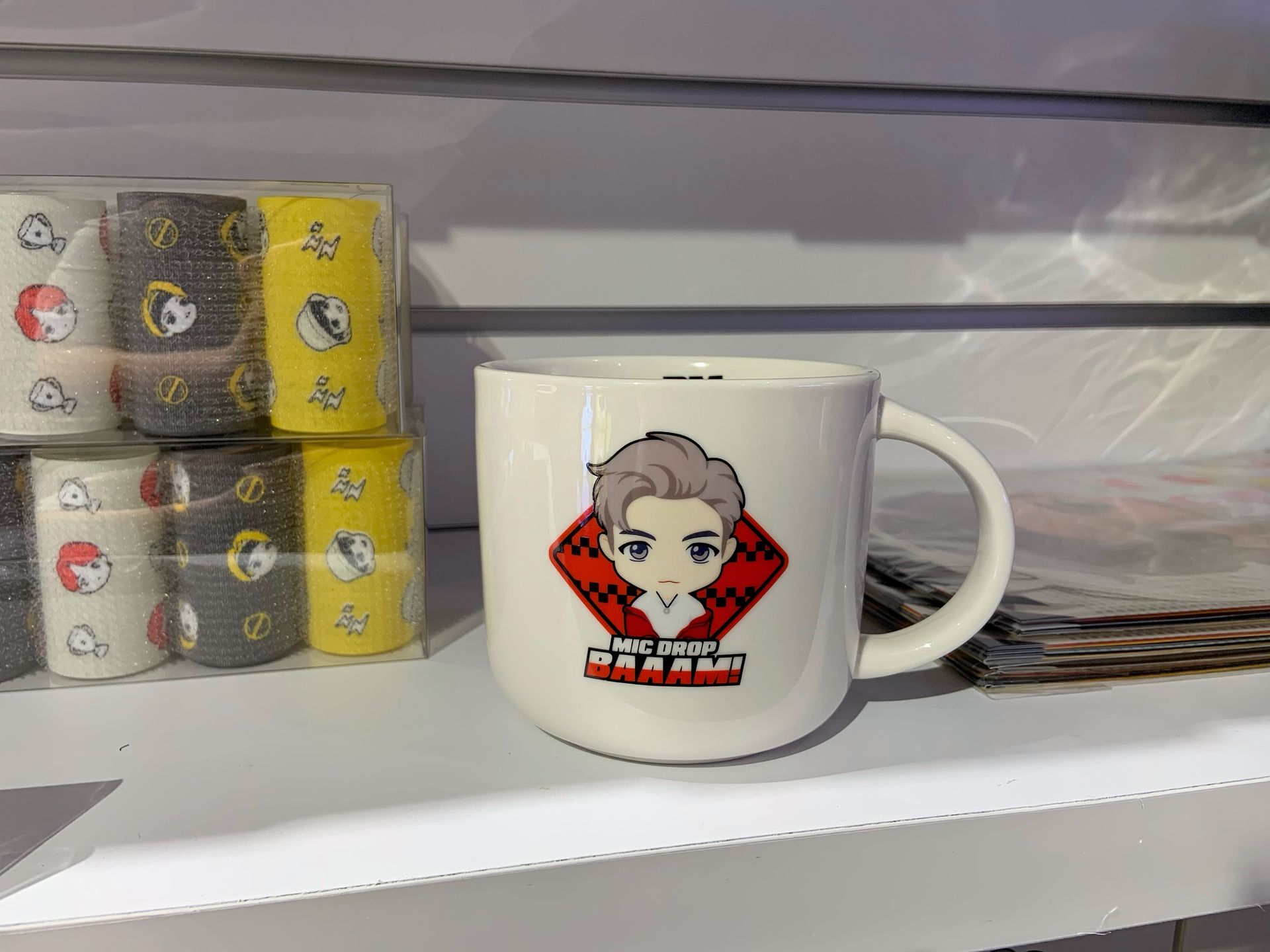 Moreover, some of the merch hark back to previous album eras, with stationery that feature ‘Boy With Luv’ aesthetics. 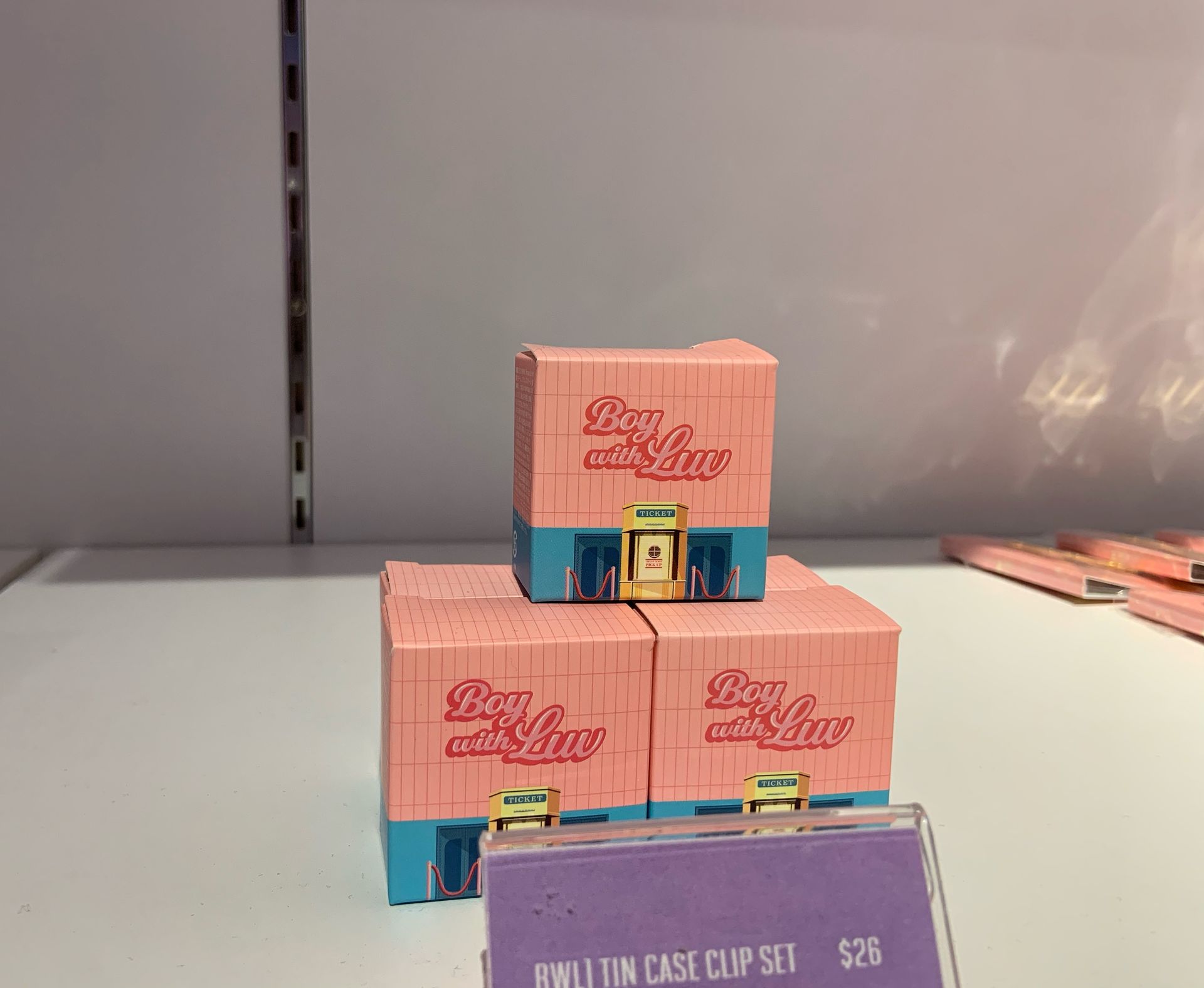 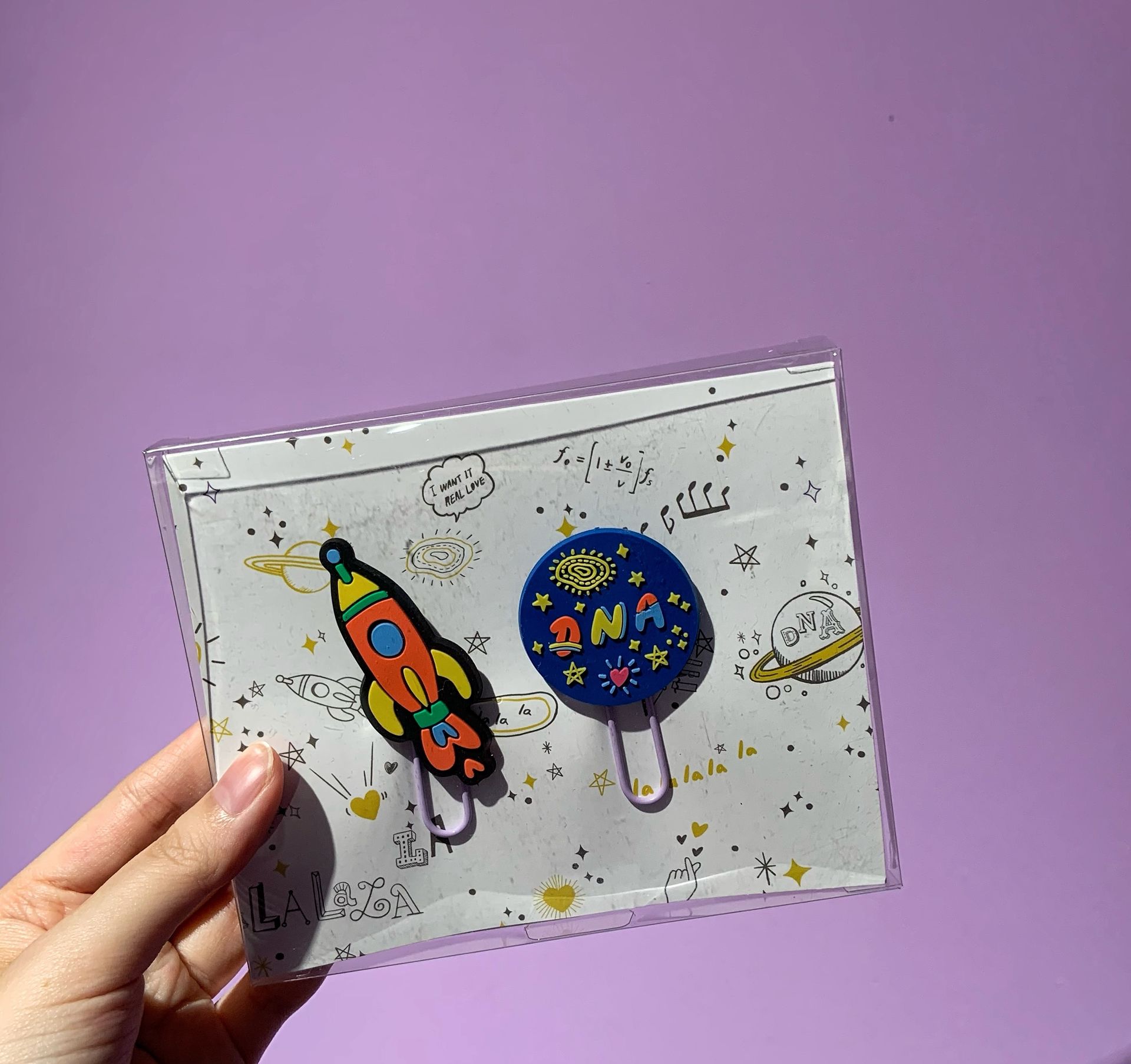 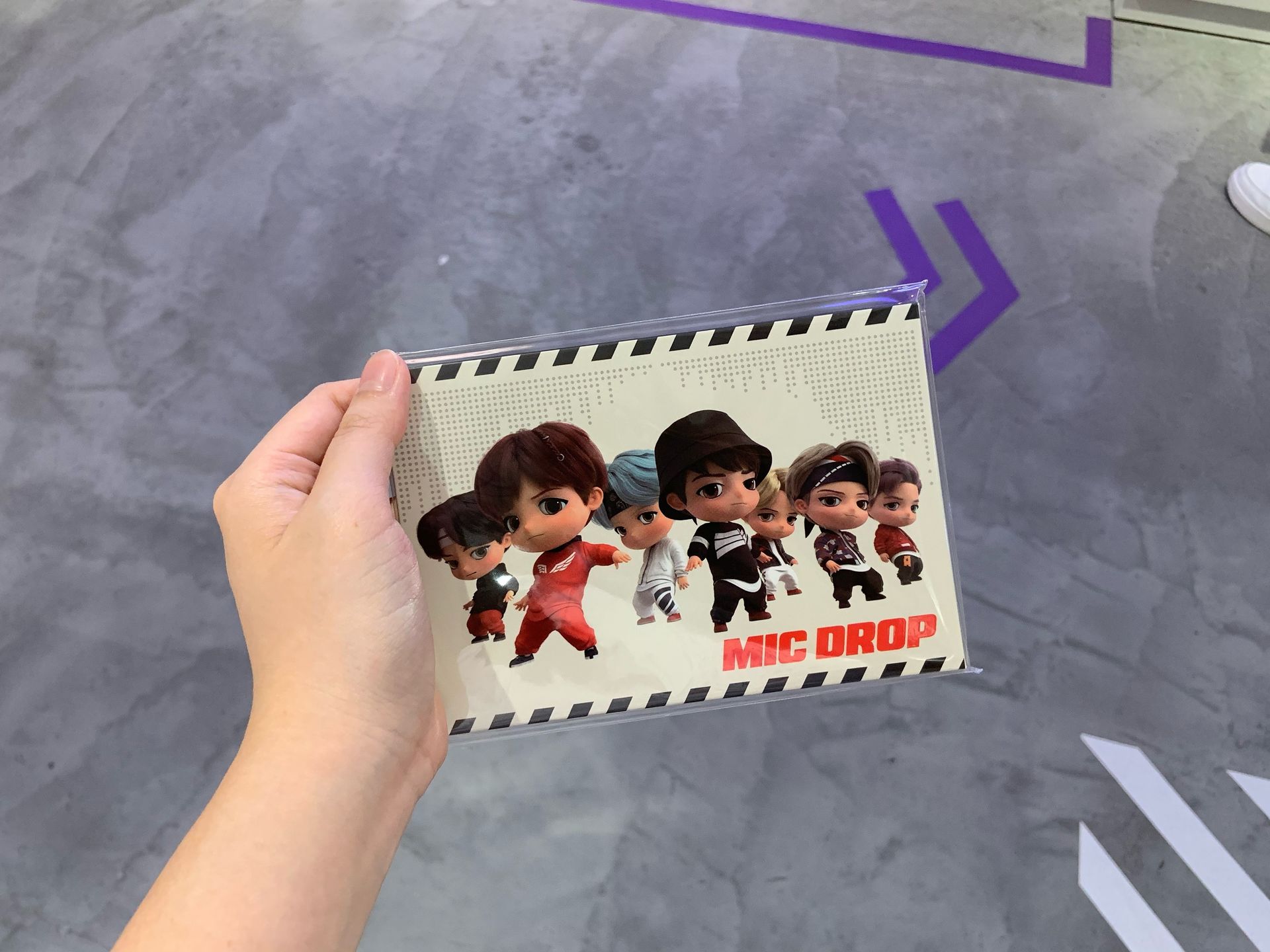 On the apparel side of things, T-shirts printed with the members’ handwritten inscriptions were available alongside dress shirts, sweatshirts and jackets. 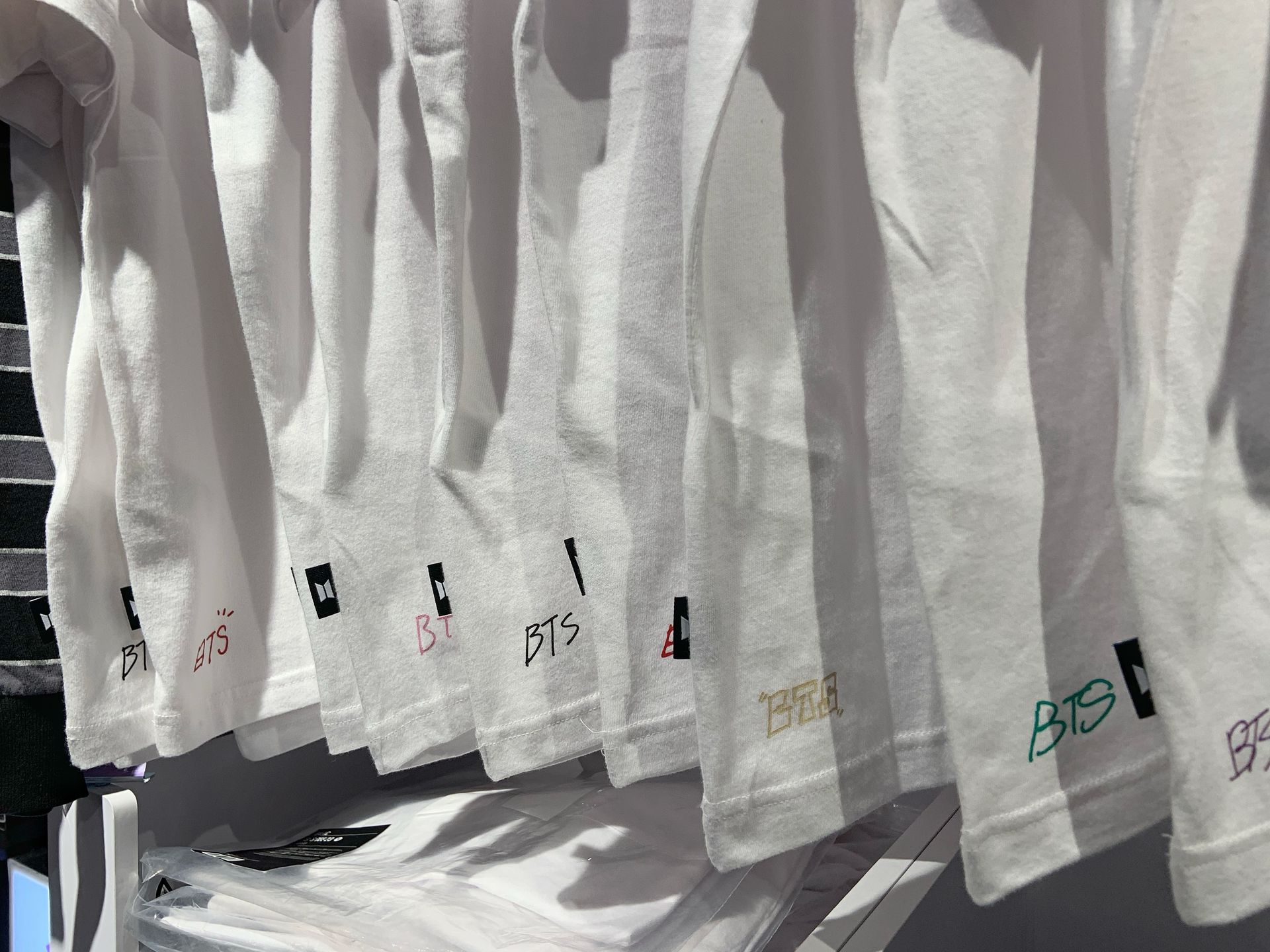 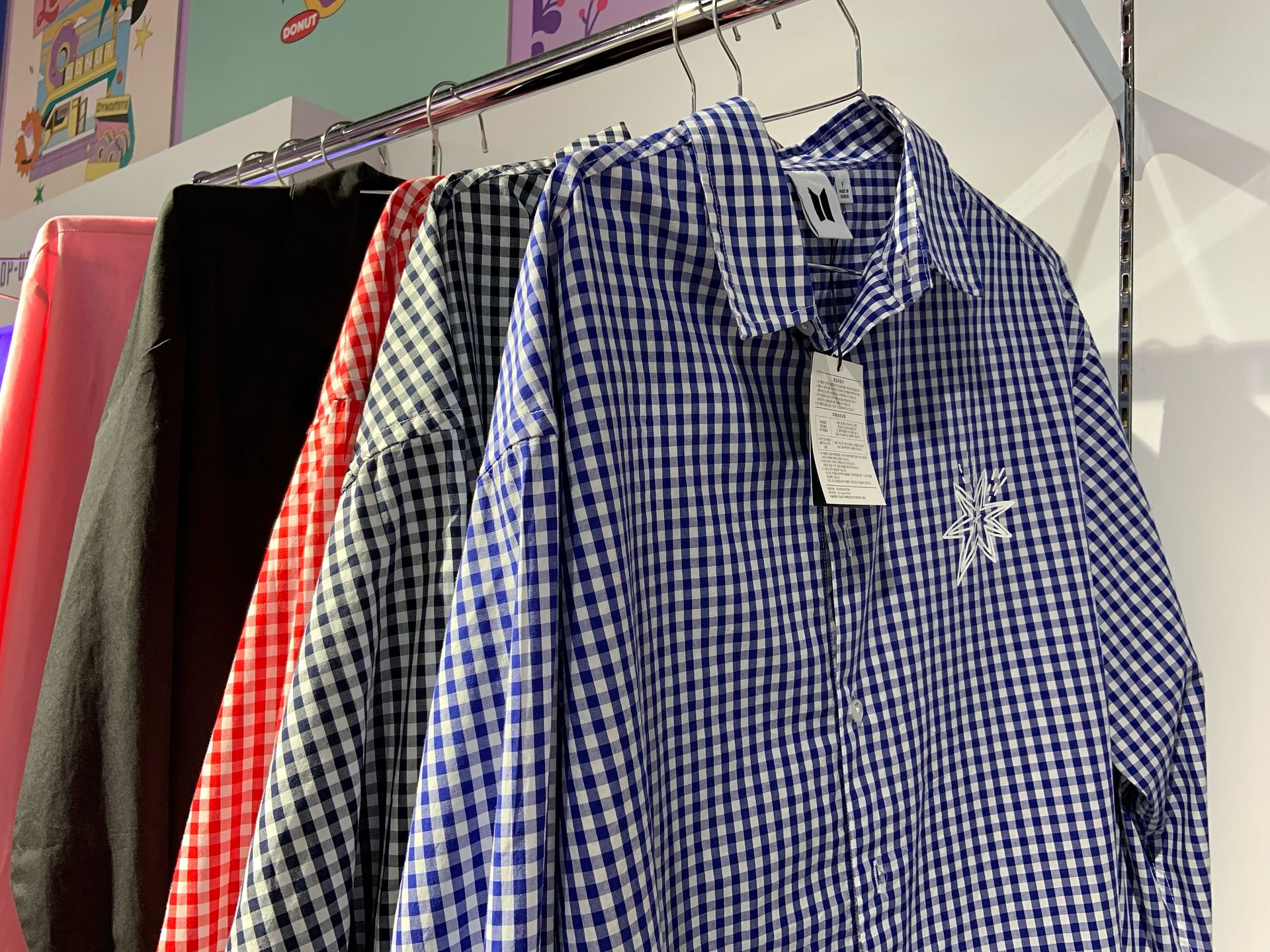 For those wanting to step up their accessory game, look no further. The store’s offering of tote bags, crossbody bags, and baseball caps are perfect choices for the stylish ARMY. 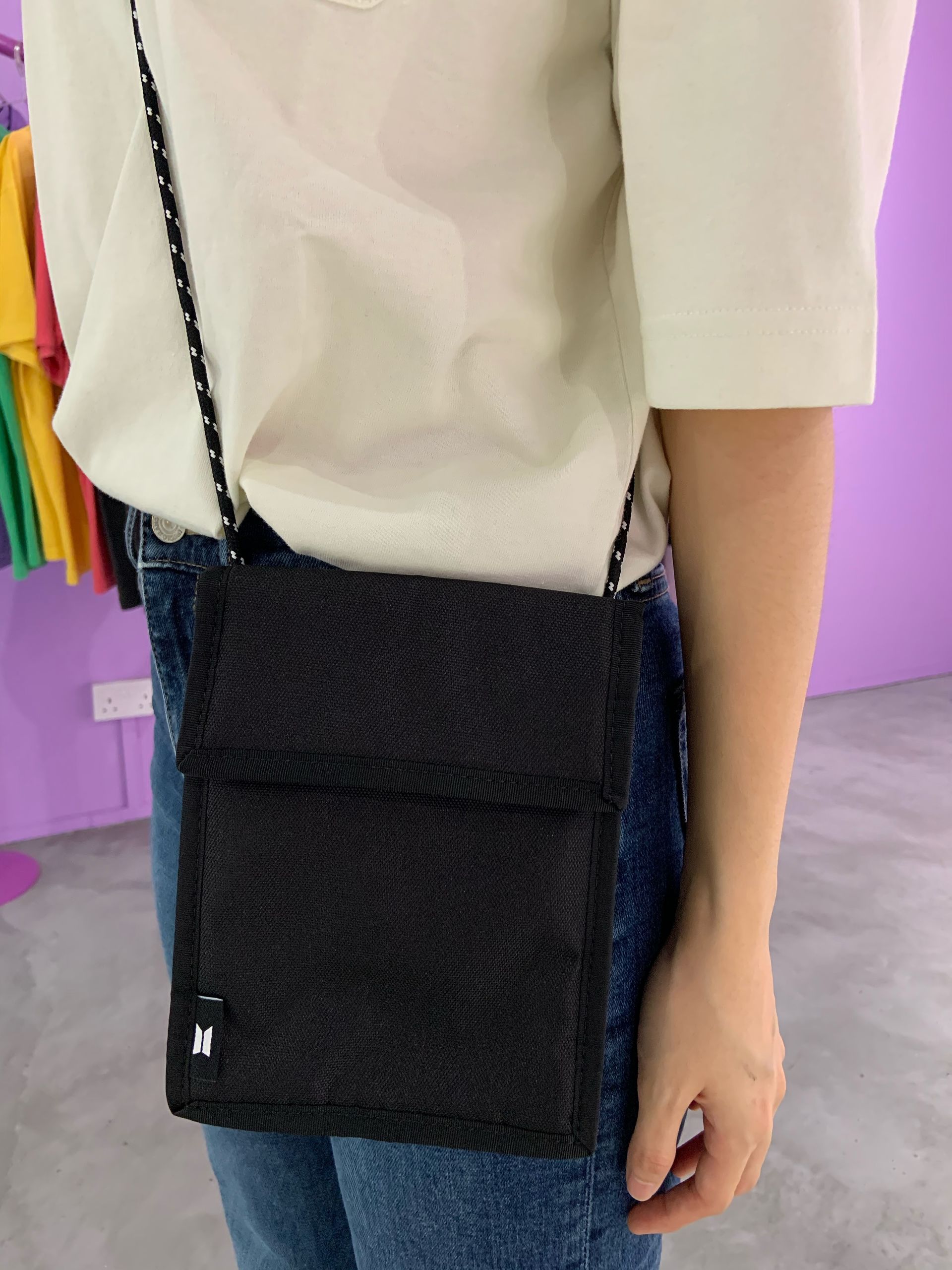 Aside from purchasing merch, the BTS pop-up store experience would be incomplete without an Instagram-worthy photo. SPACE OF BTS consists of one main photospot, where fans can snap a picture against a pastel purple backdrop with a neon sign that spells out ‘I PURPLE YOU’. 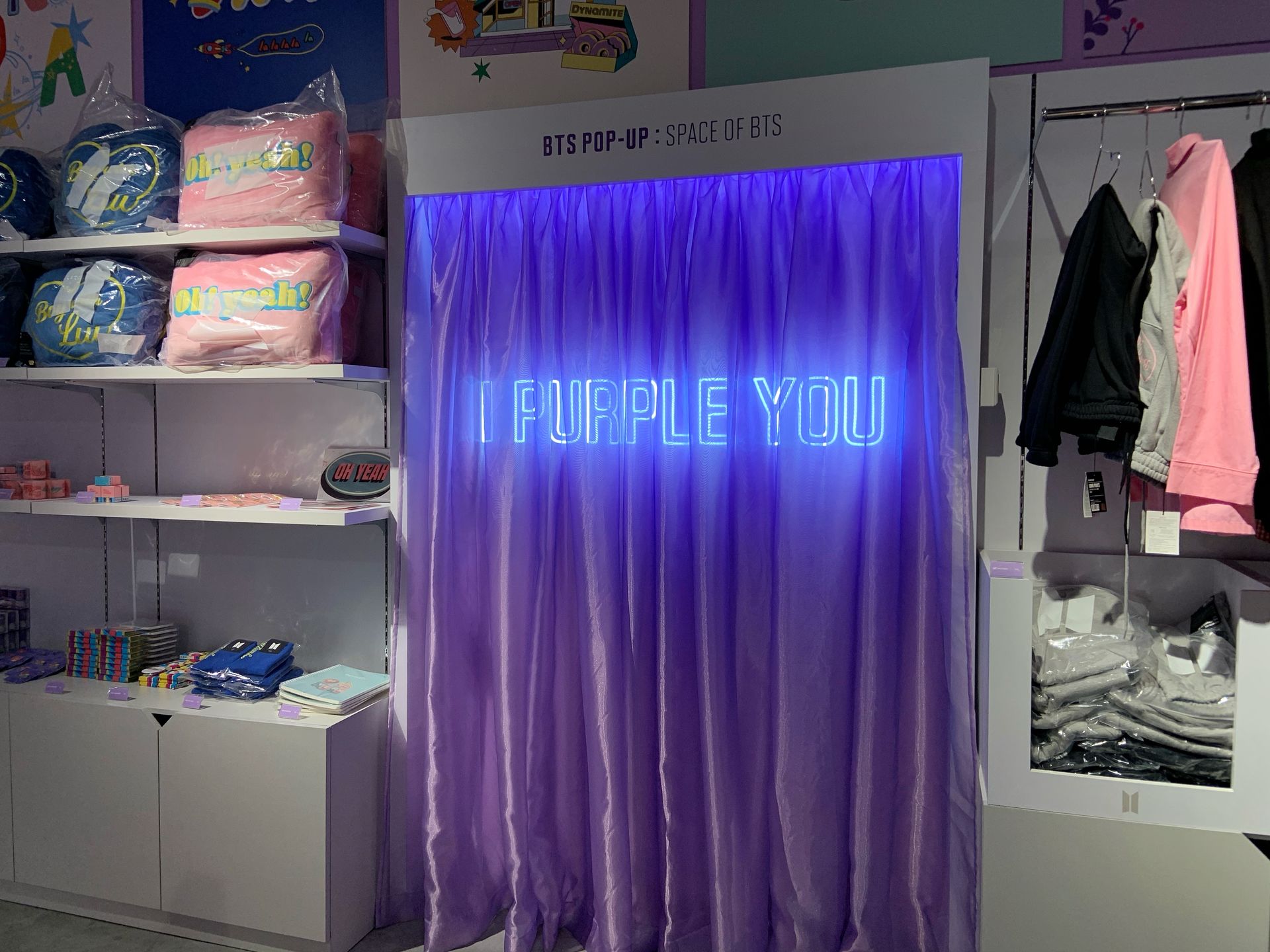 The signature phrase first originated from BTS member V during the group's third MUSTER in 2016, where he showed appreciation to fans with this expression. Since then, this phrase and the colour purple have come to represent the special bond between BTS and ARMY. 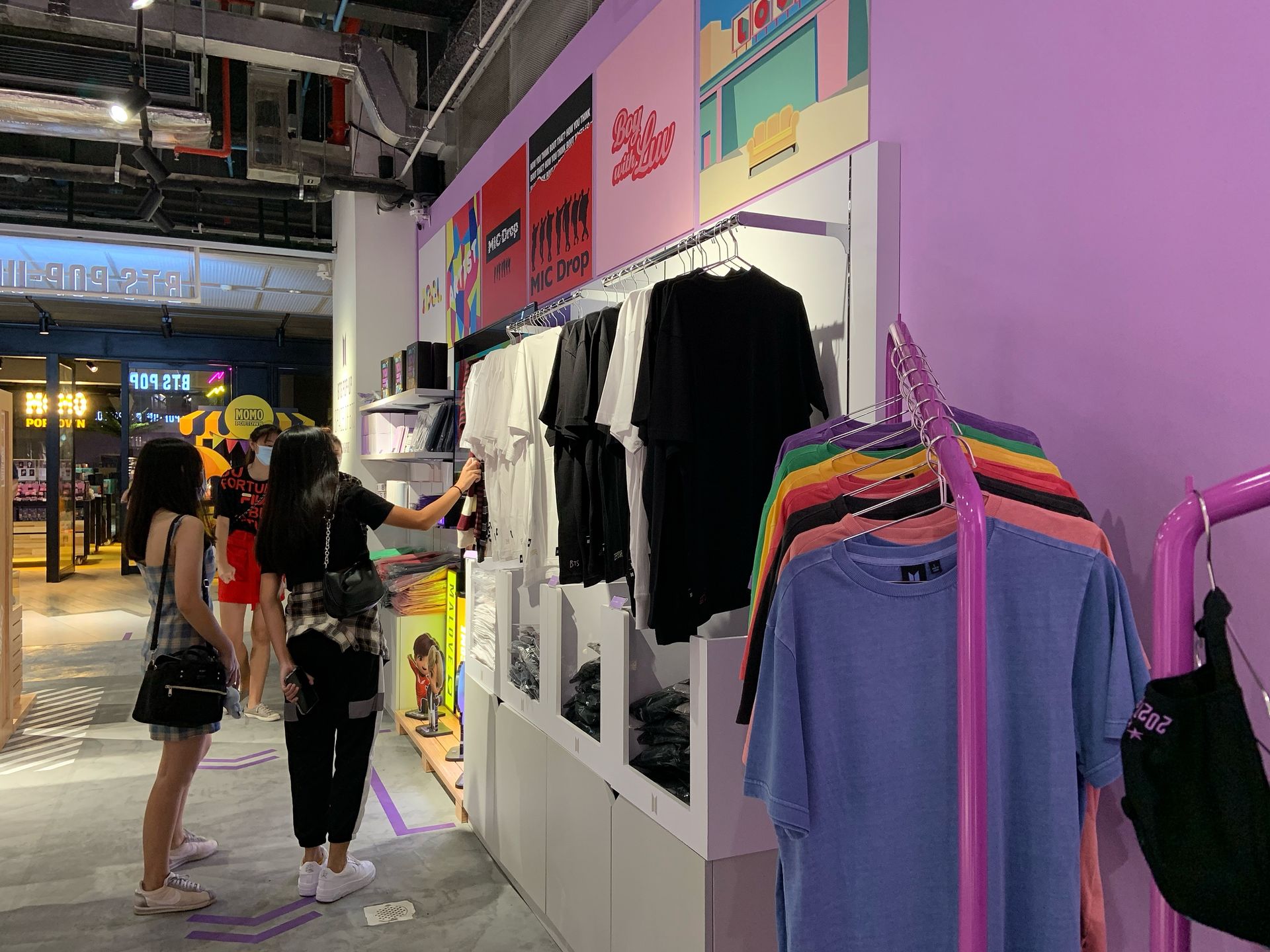 Due to Phase 3 (Heightened Alert) restrictions, only a maximum of 15 people are allowed in the store at once. As such, visitors can scan a QR code located right at the entrance to join a virtual queue, after which they can enter when there are spots available. Registration for the virtual queue begins from 10 AM to 9.30 PM, and will only be valid for entrance on the same day. 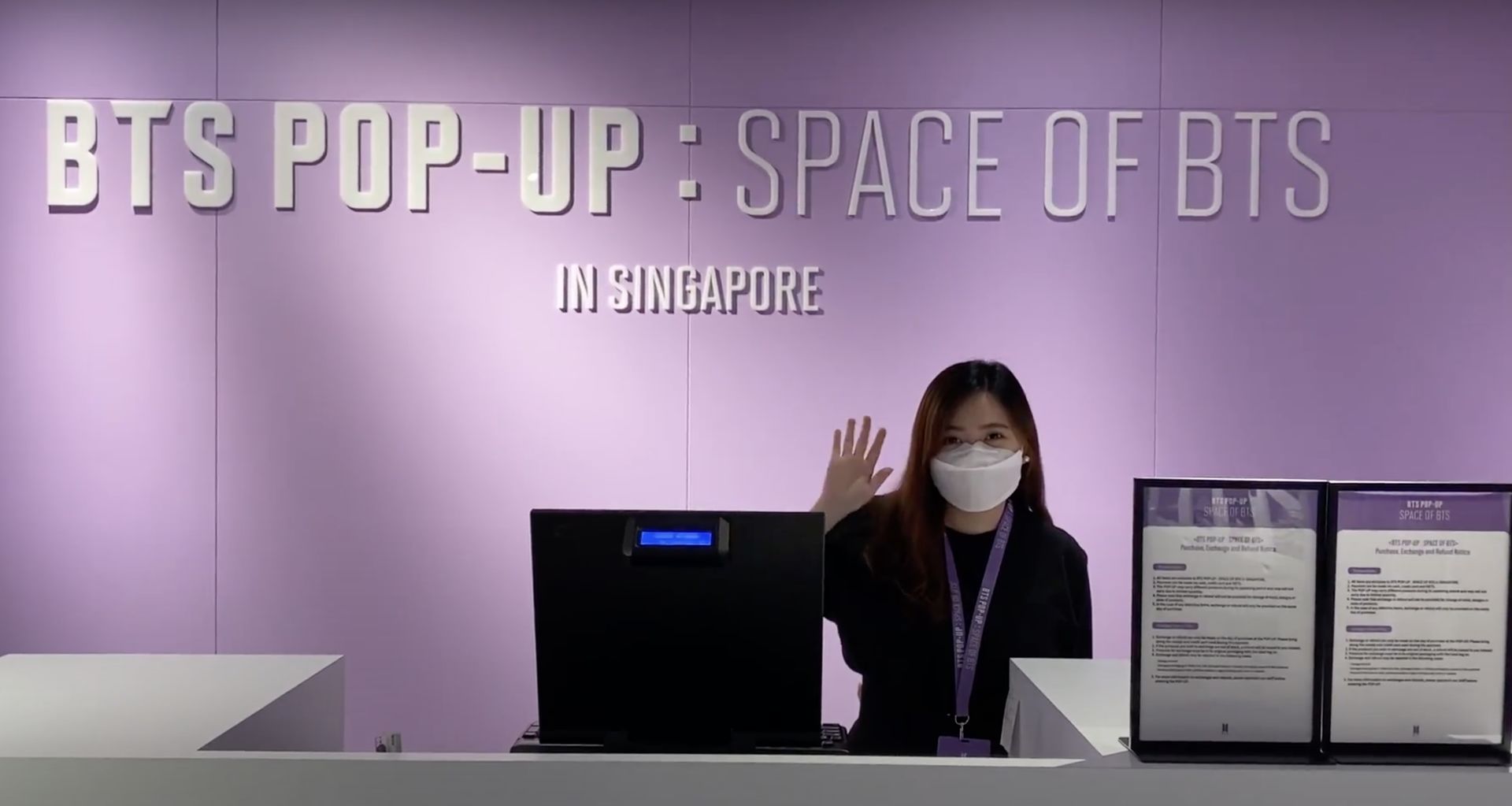 While there are no confirmed dates as to when new merch would be arriving, SPACE OF BTS may offer new drops from time to time until August. Stay tuned to Bandwagon for more updates.