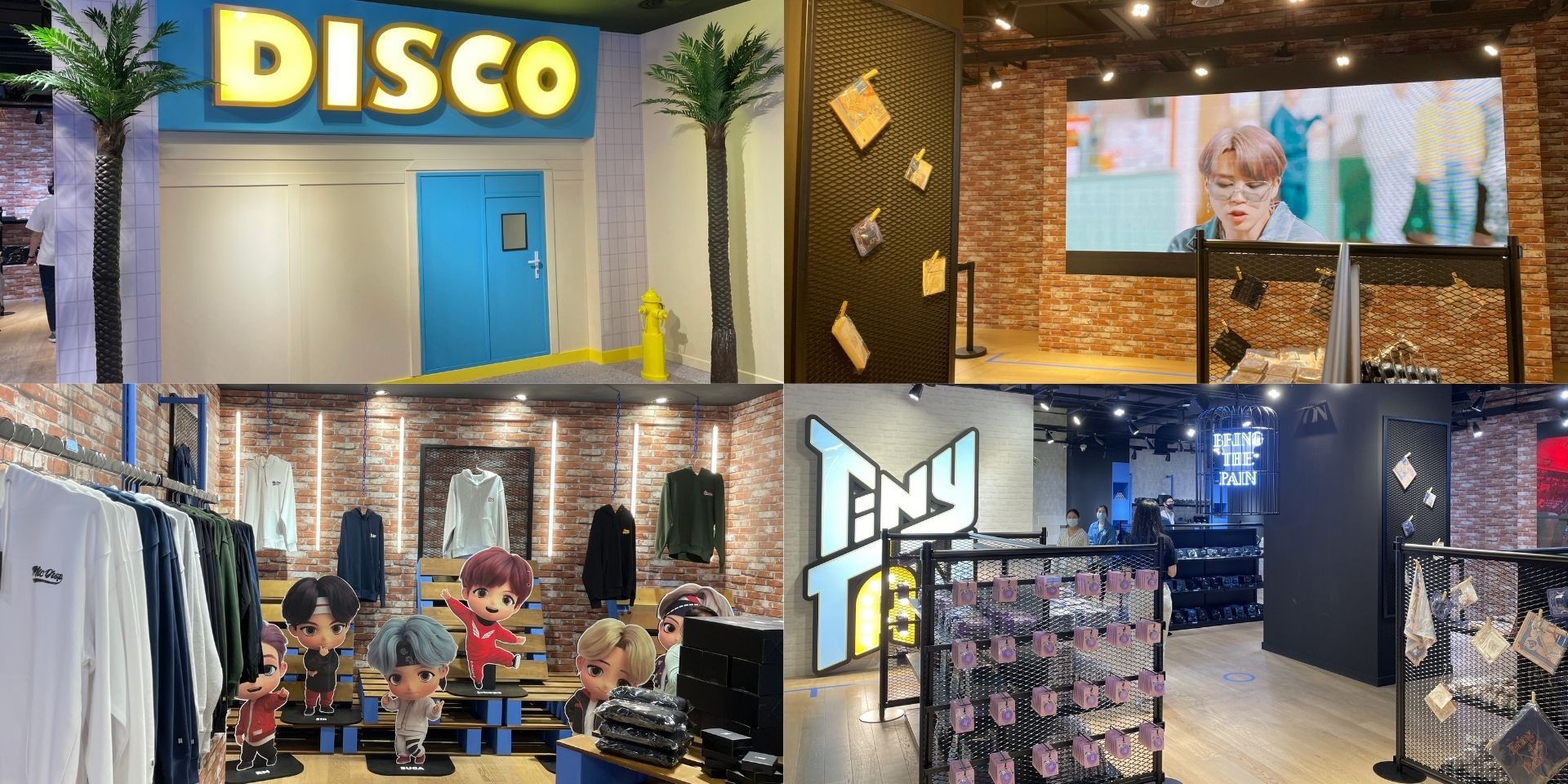 Undoubtedly one of the biggest global superstars to dominate our world this decade, the ripples of the K-pop titans’ tidal effects can be felt here in Singapore. Planted right on the city’s main shopping street, a physical pop-up emerged last weekend, welcoming throngs of ARMY ready to swarm one of only three physical showcases in Asia following fully-booked pre-reservations.

Have you visited the #BTS_POPUP at Plaza Singapura yet? Let us walk you through themed sections - ‘Black Swan,’ ‘ON,’ ‘Dynamite,’ TINY TAN, and more! #BTS #MAP_OF_THE_SOUL pic.twitter.com/fyuZGlsDN9

From an extensive varsity collection to adorable Tiny Tan stationery, to insta-worthy photo spots, the store that took 3 working days to set up saw hundreds of fans streaming in each day, segregated over 23 one-hour slots from 10AM to 10PM daily. As of The competition comes charged with a “now or never” attitude – rotating stocks each week, the pop-up is where fans can get their hands on the merchandise physically before they shift online for good.

BTS open MAP OF THE SOUL online store, here's how to shop for BTS merch

On the day of the pop-up's opening, Bandwagon headed down to Plaza Singapura to have a first look of what the store entailed. While it’s never going to be completely the same, here’s a peek of what it offered to mentally (and emotionally) prepare for yourself before you make your visit in these few months:

Tucked in the far corner of the mall, the store is almost unnoticeable until you’re well in front of it, signposted by a queue of fans snaking up in front of Muji. Greeting fans with a stylish black wall that reads BTS Pop-Up: Map Of The Soul Showcase in Singapore, the area in front of the pop-up doubles as a good backdrop to flaunt your haul. 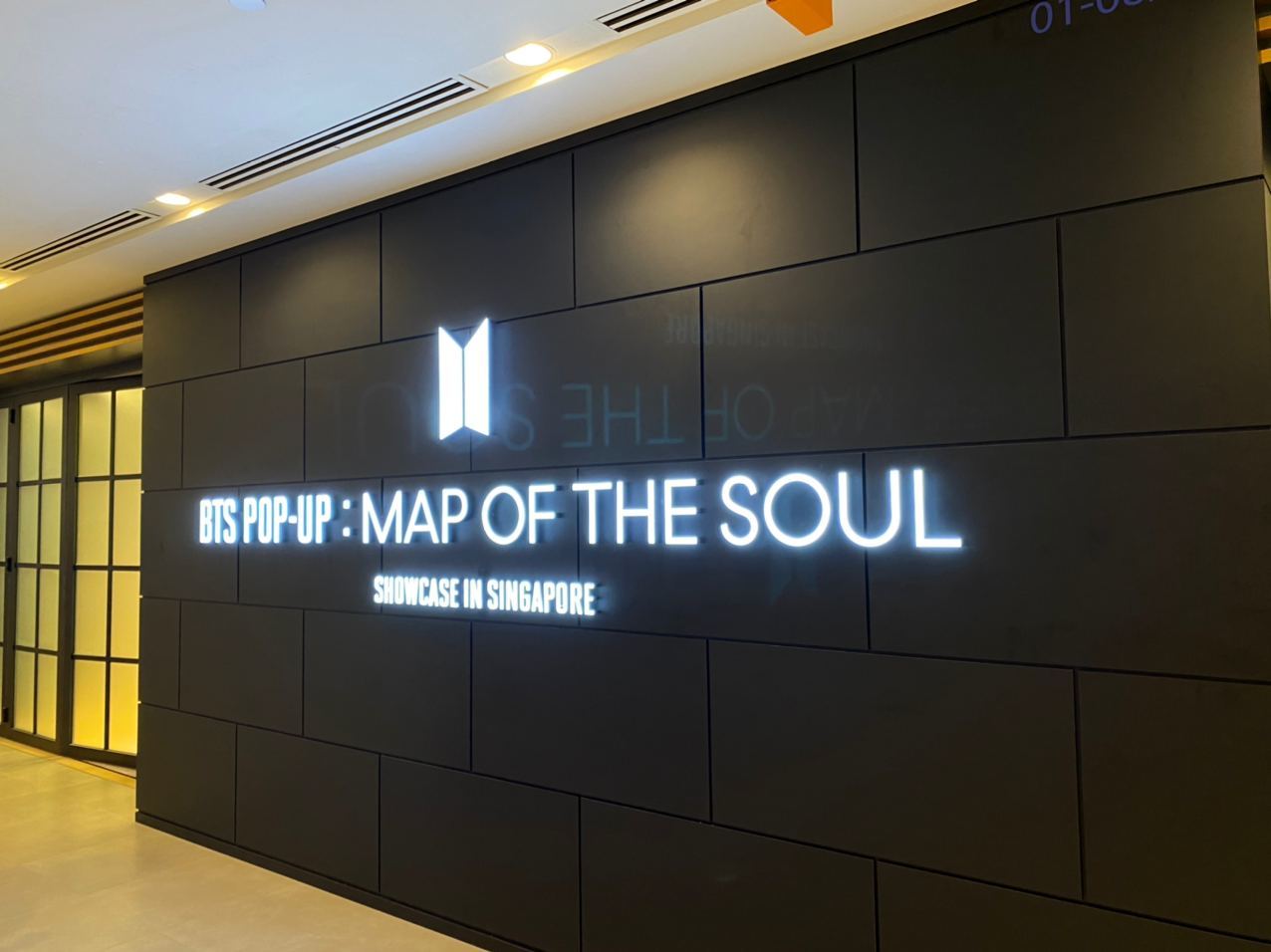 After being ushered into the store, fans are welcomed with a huge BTS logo, where decks of monochromatic black merch are displayed underneath. On the shelves are limited-edition file blocks, pouches and photo-stands. 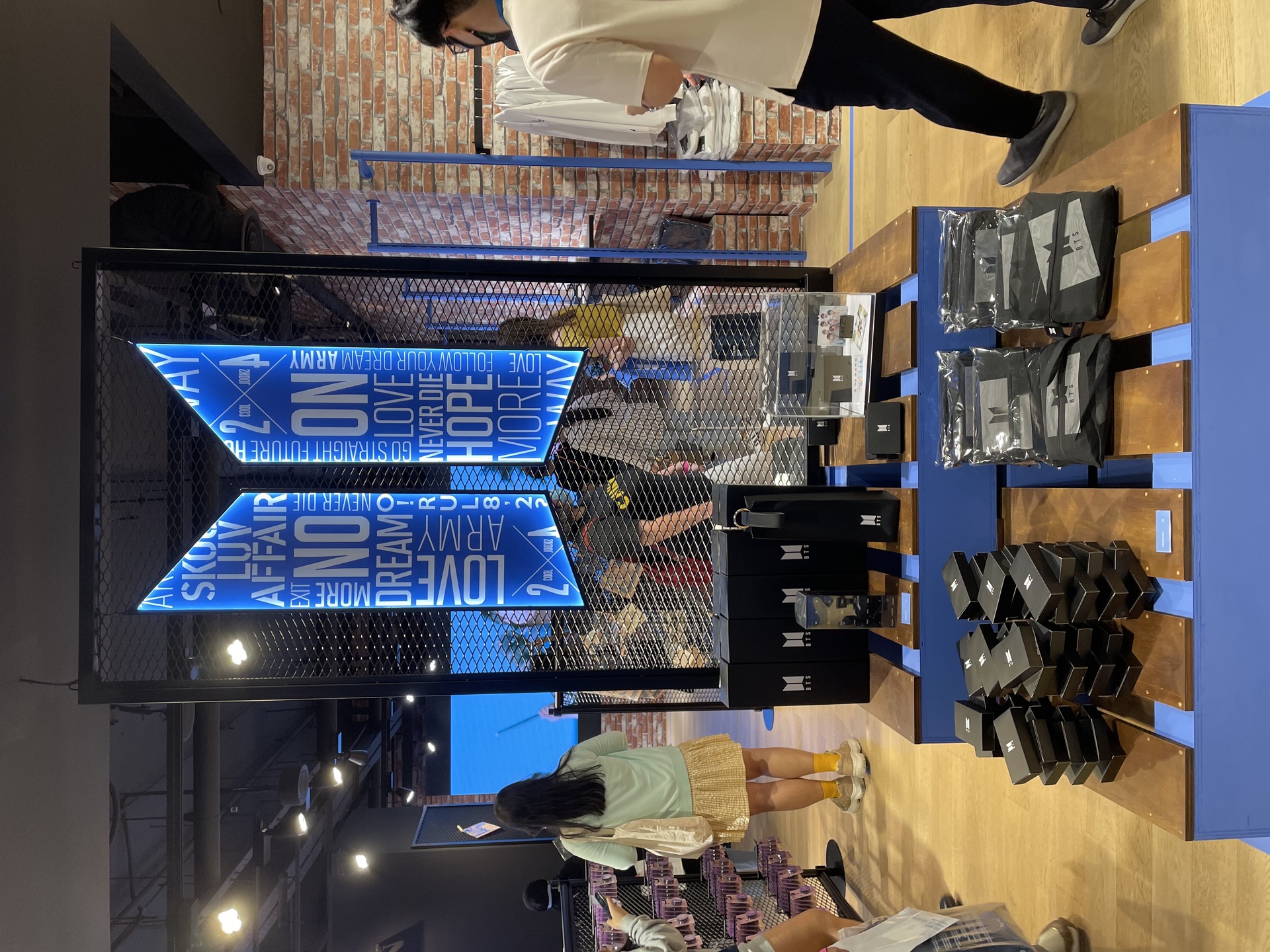 Scattered throughout the room like beacons for where fans should move are multiple photo spots for the perfect shot. 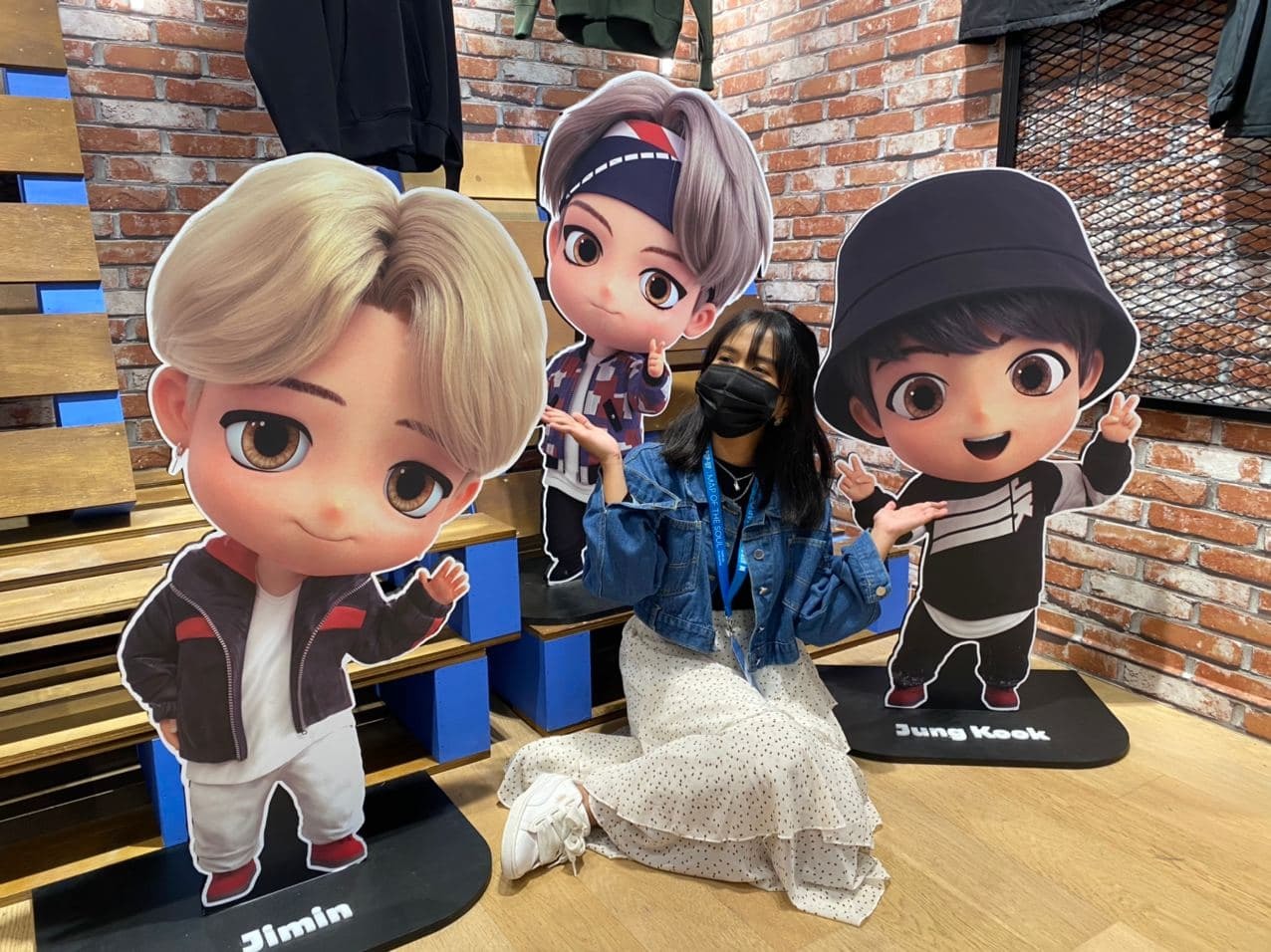 To your right, grab a photo with the endearing animated versions of the Bangtan Boys. 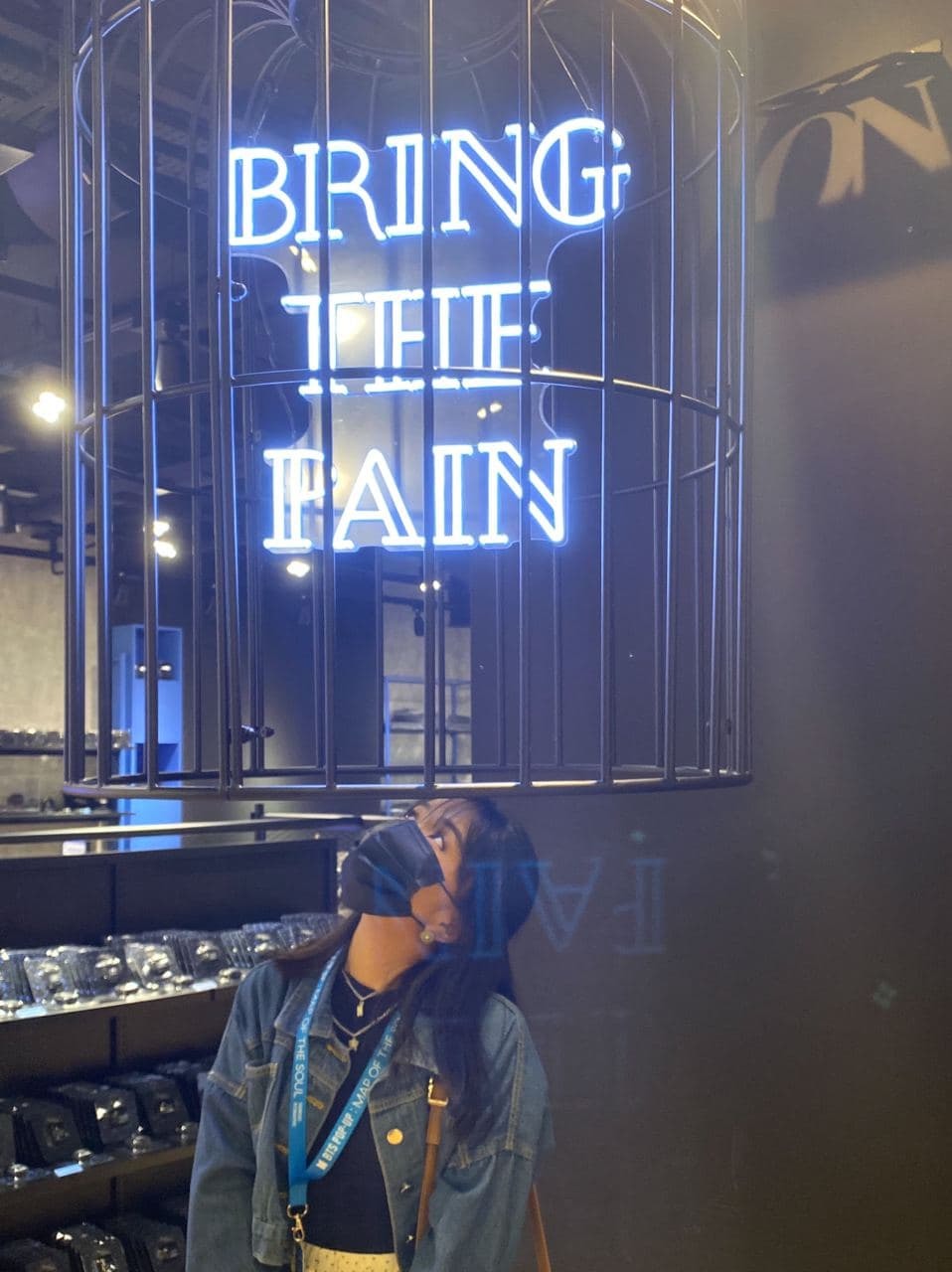 Or duck under a black cage with the lyrics for ‘ON’ towards the front. 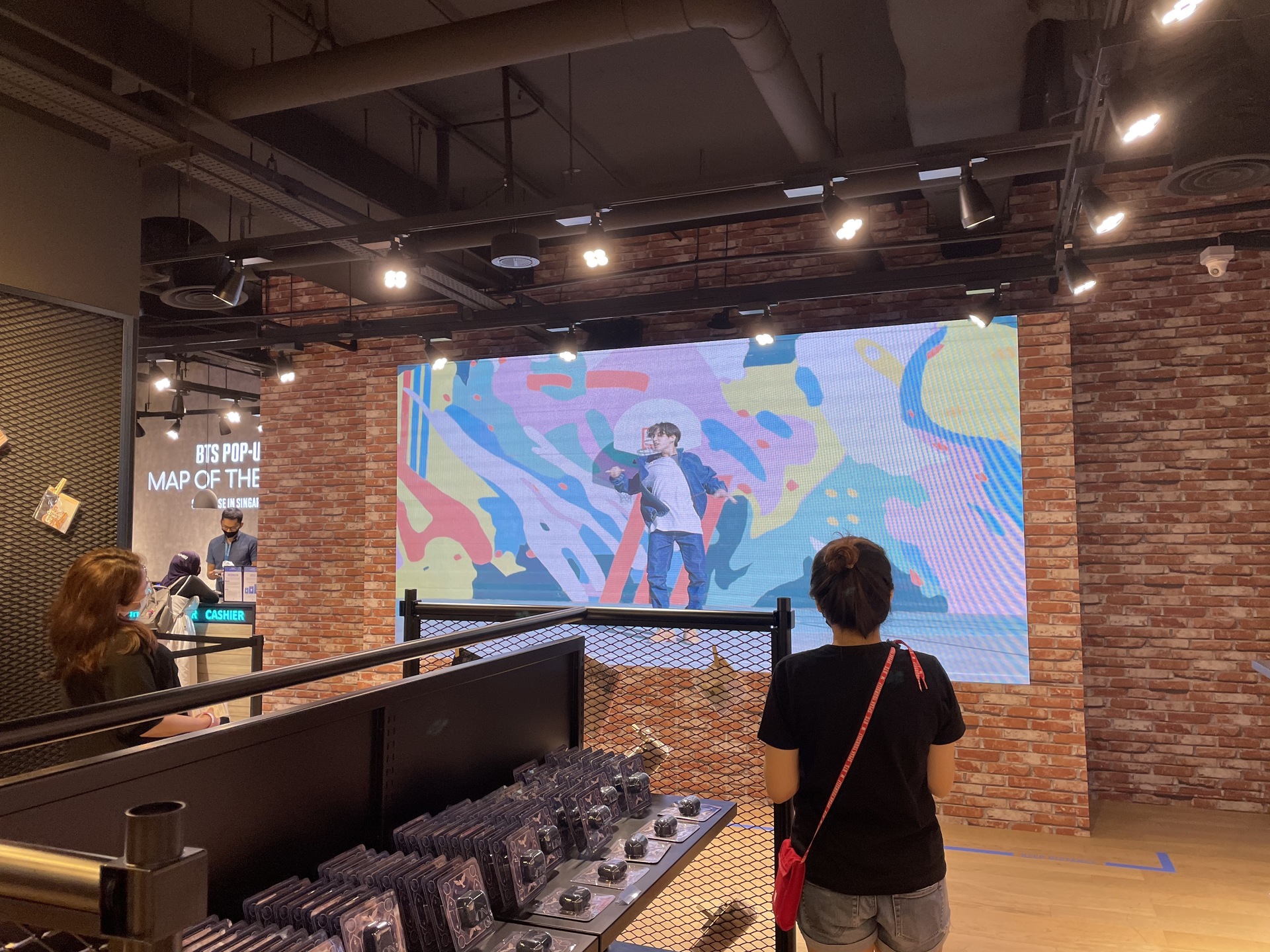 If you’re feeling confident, head over to the LED wall displaying BTS’ hit music videos and attempt some of their dance moves. 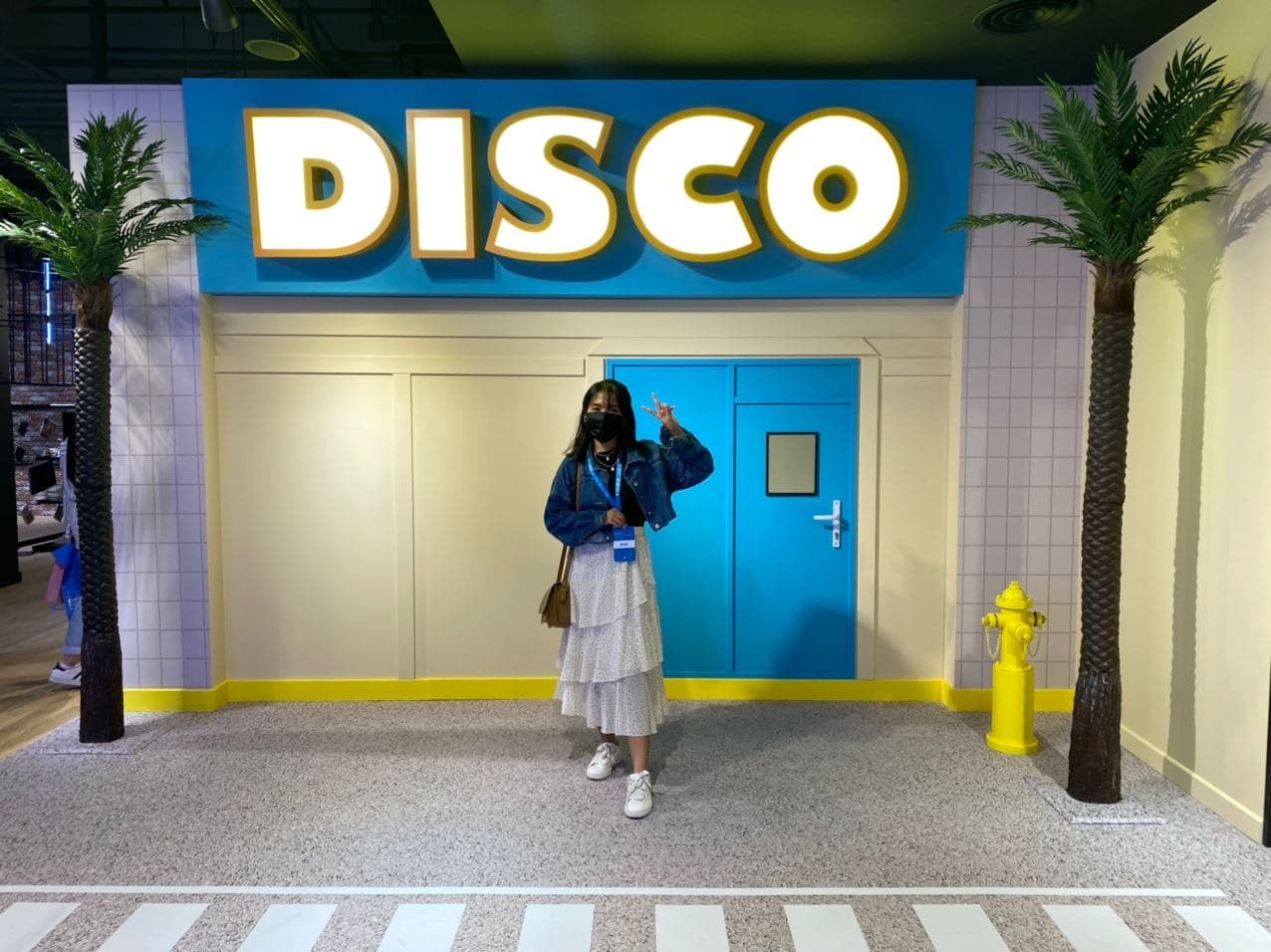 Alternatively, a set similar to the one we see in ‘Dynamite’ awaits you, where you can snap group pictures with fellow ARMY friends. 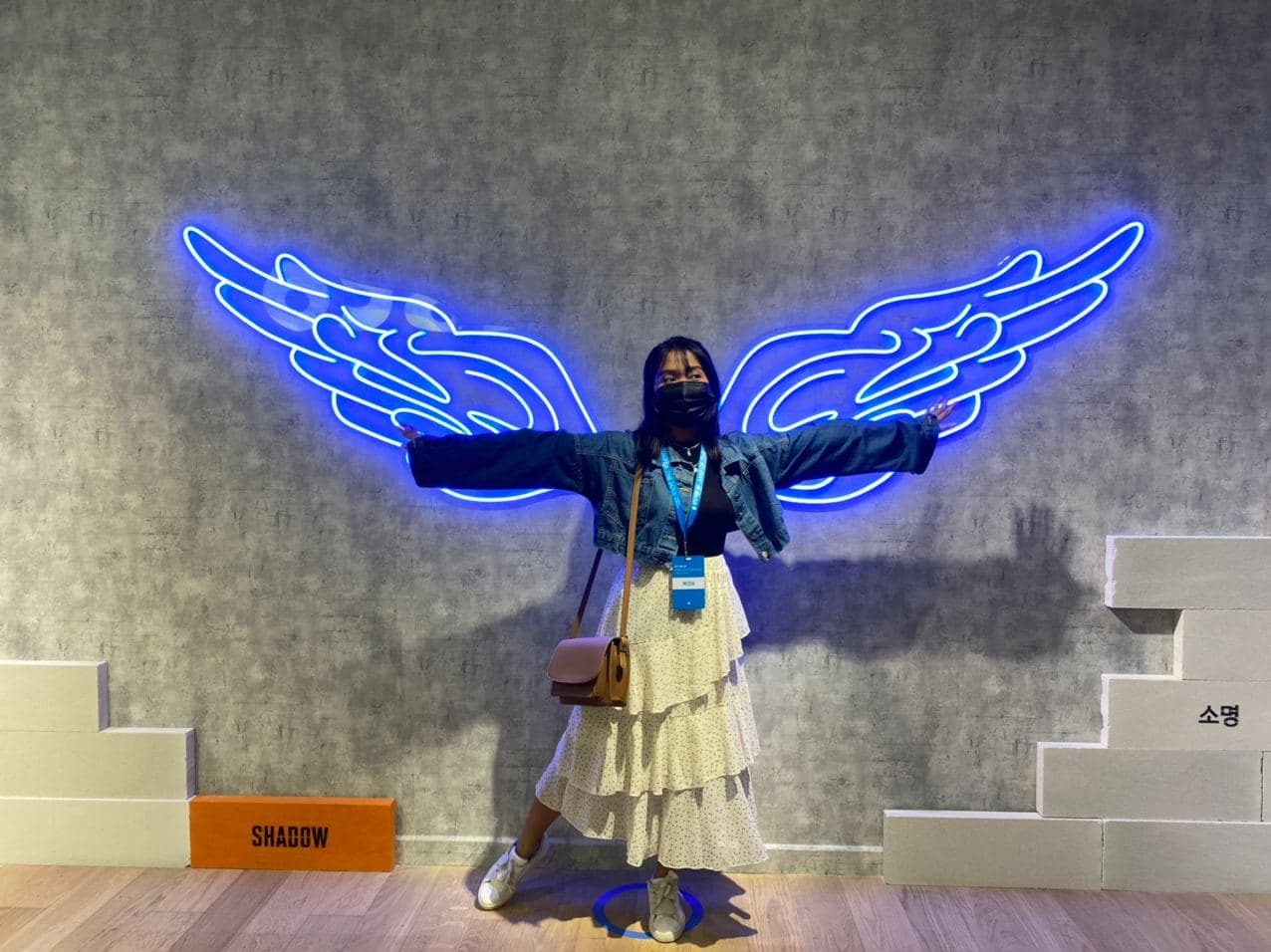 For all the wings BTS have given their fans, you can also take flight with this sweet photo spot marked out with where exactly you should stand. 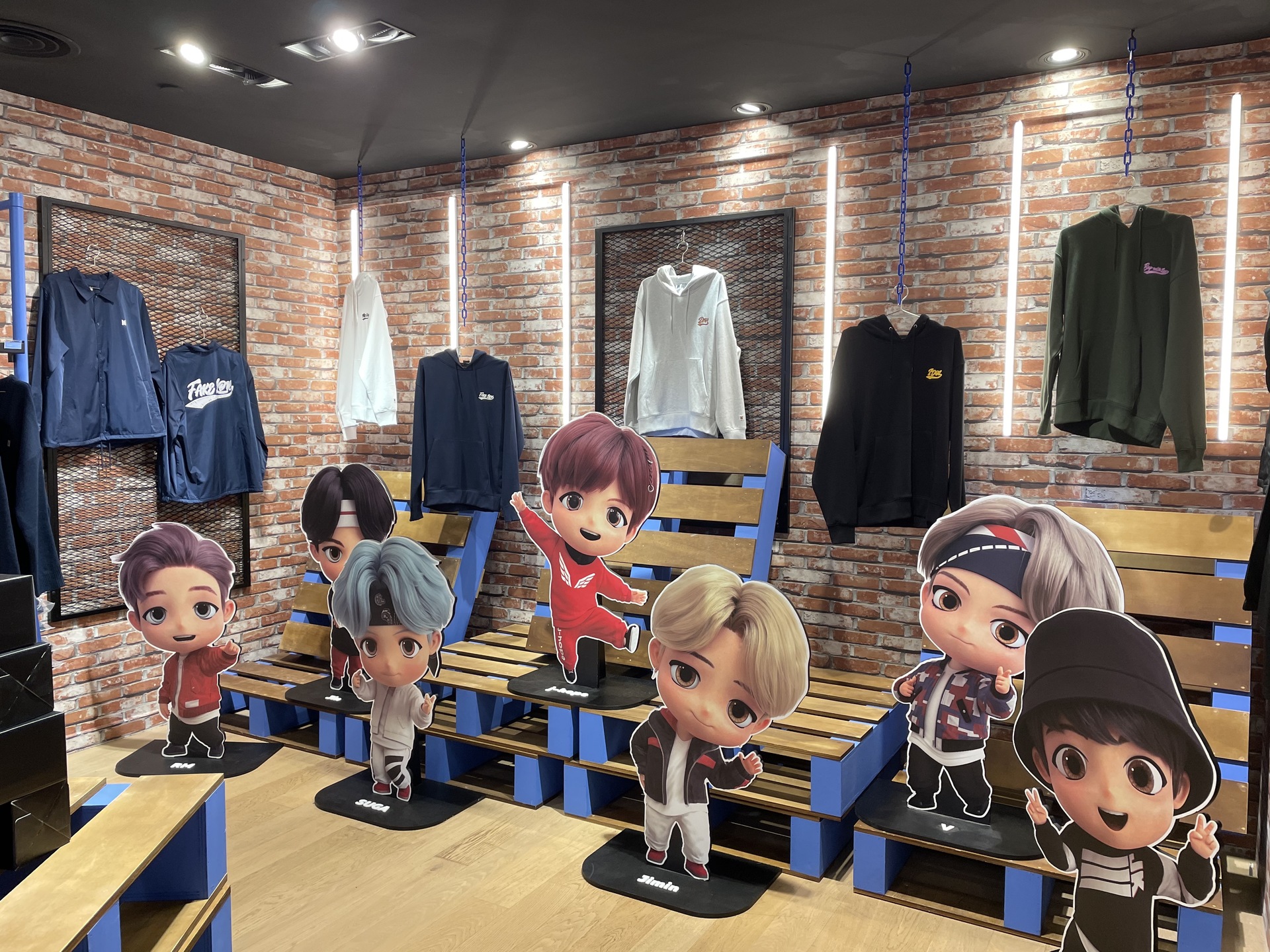 Upon entering the store, some of the fans had their attention immediately diverted to the right where they were captivated by the adorable mini standees of BTS' Tiny Tan figures. Hoodies were hung above the characters and tucked at the side were varsity jackets and cardigans. 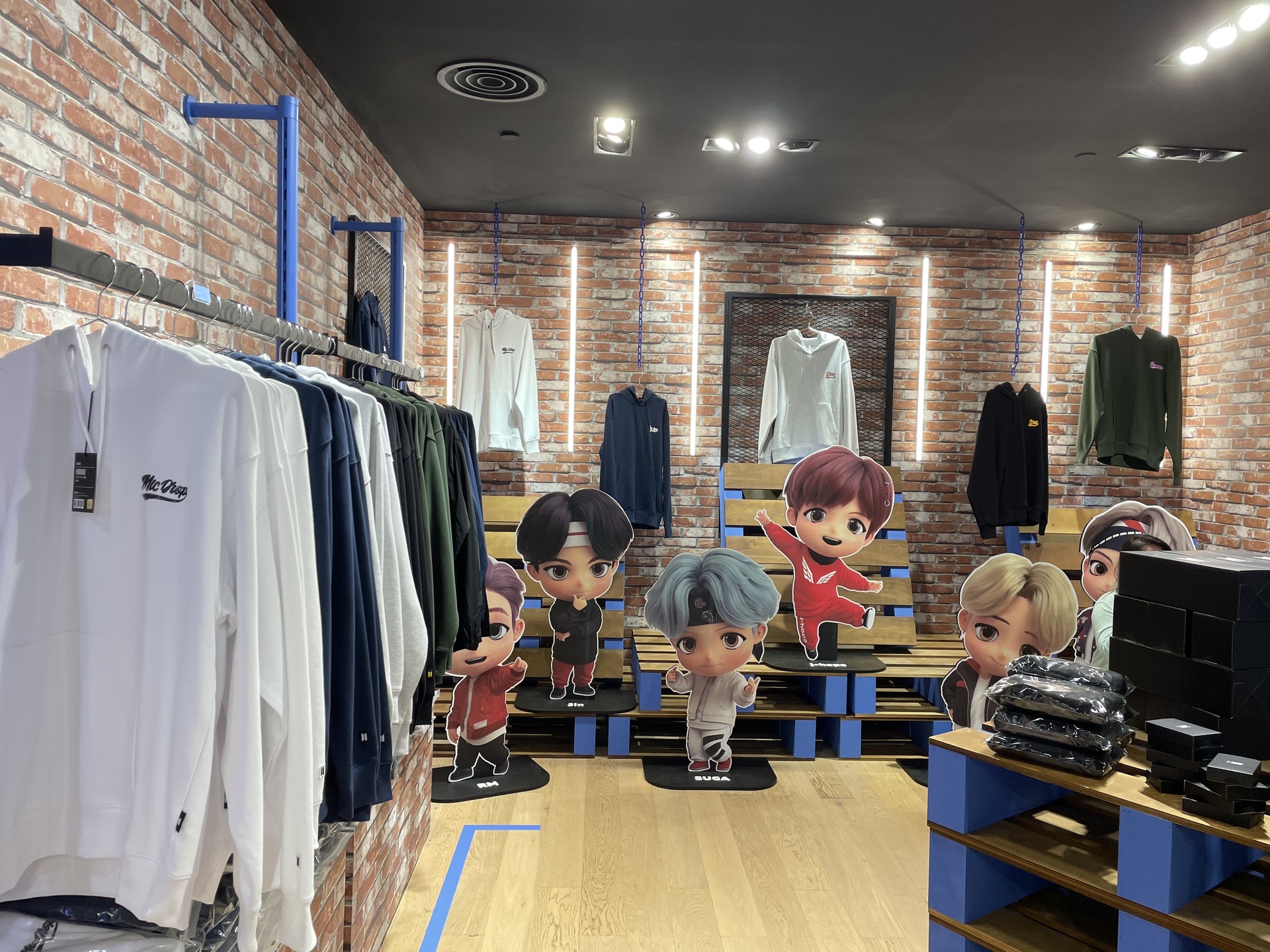 As the theme evolves every week, fans can anticipate fresh design drops on their next visit. 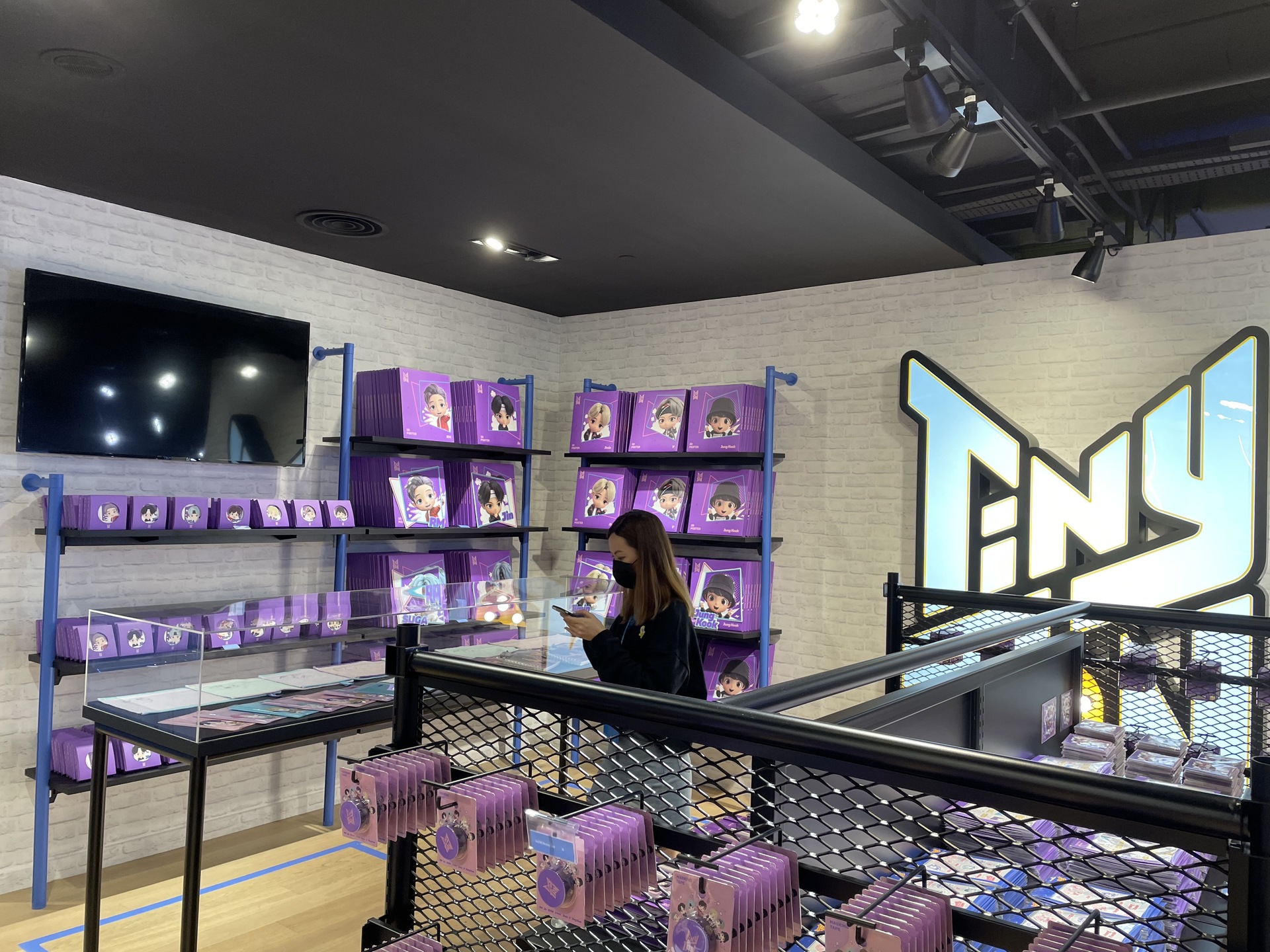 This entire section is dedicated to the animated avatars of the boys, stacked with bright purple packaging of Tiny Tan merchandise. Tiny Tan-themed masking tape, gel pens, notebooks, and 3D posters of the individual members can be added to your collection. 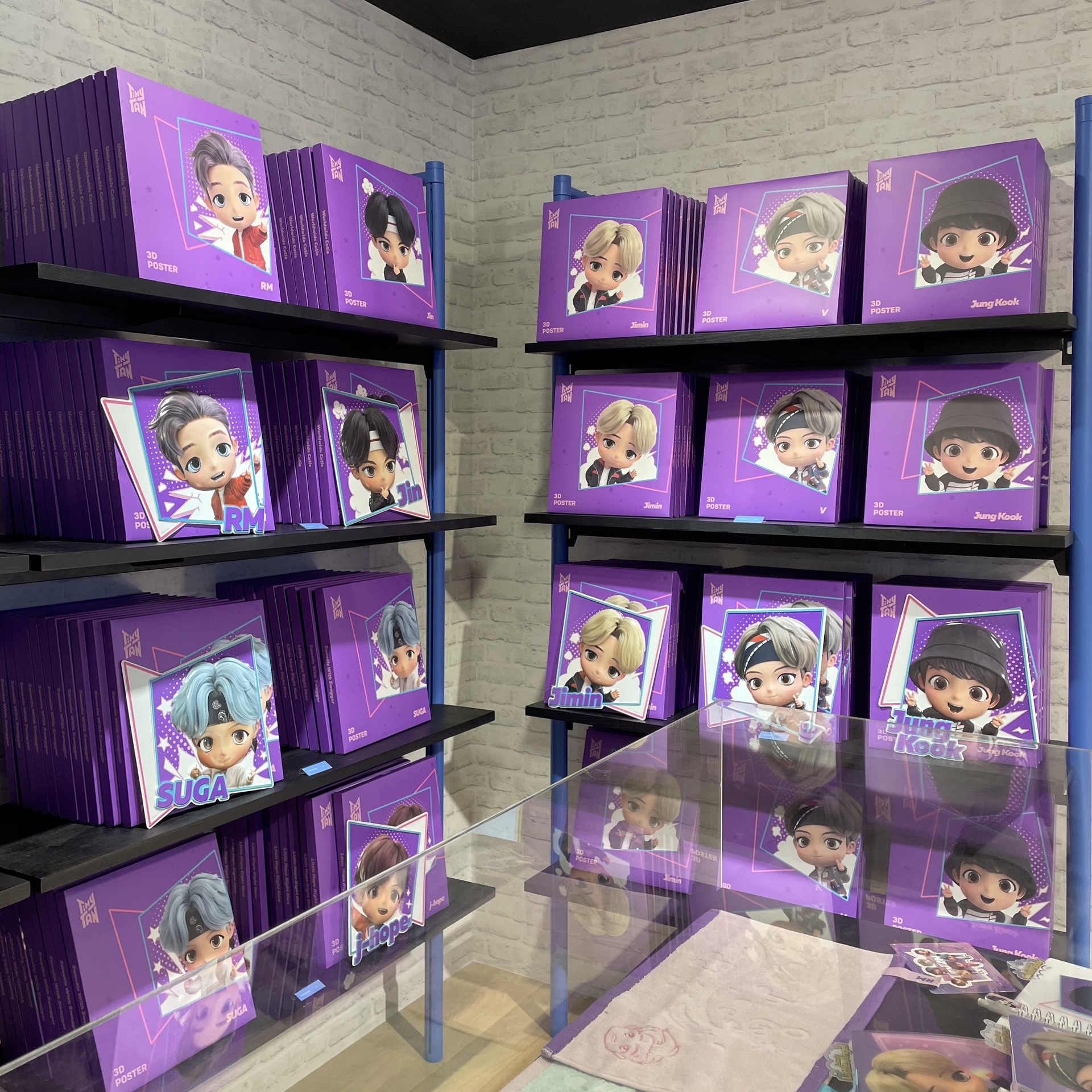 A transparent display was also placed in the centre for fans to get a full view of the complete Tiny Tan collection. 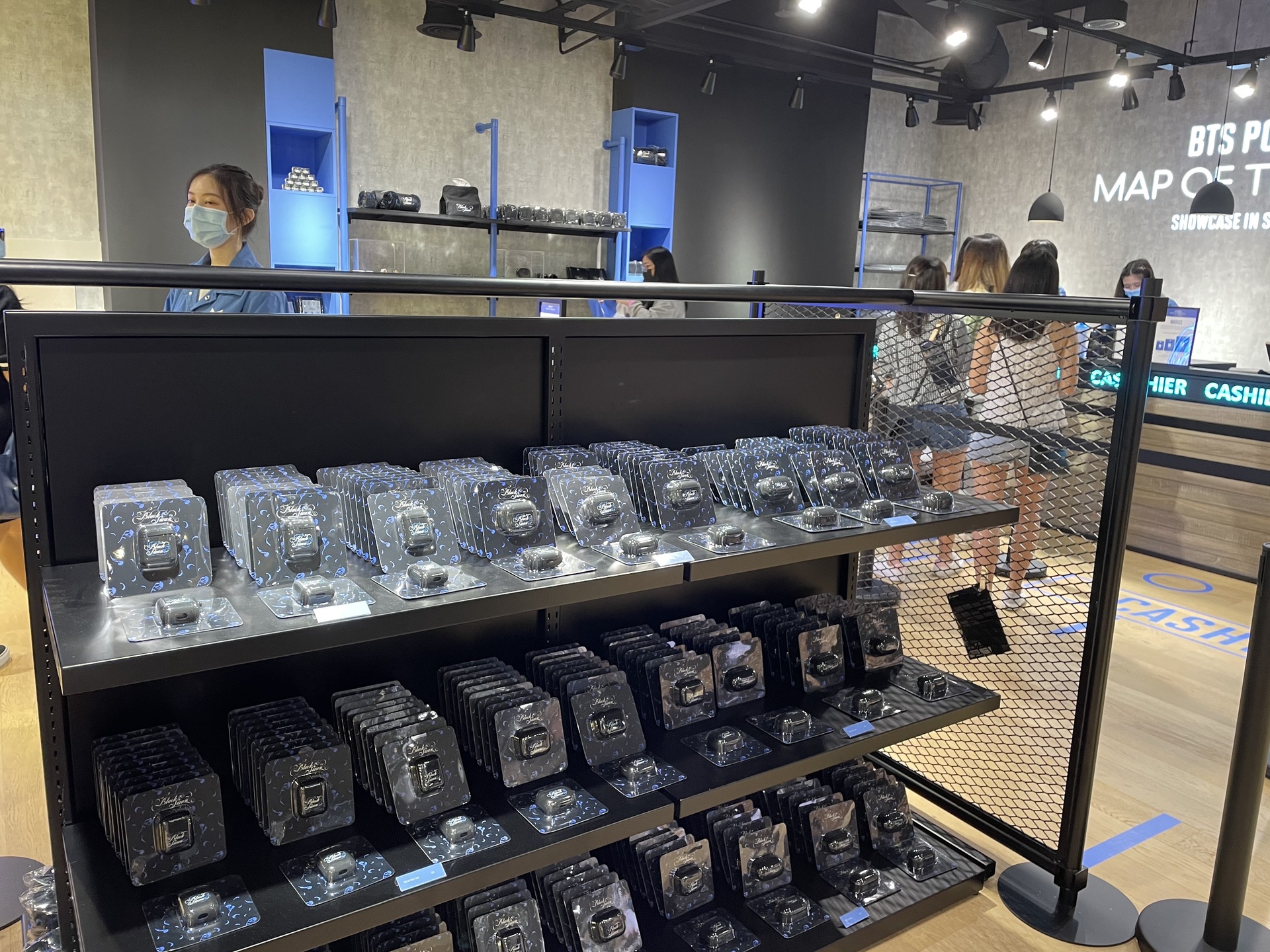 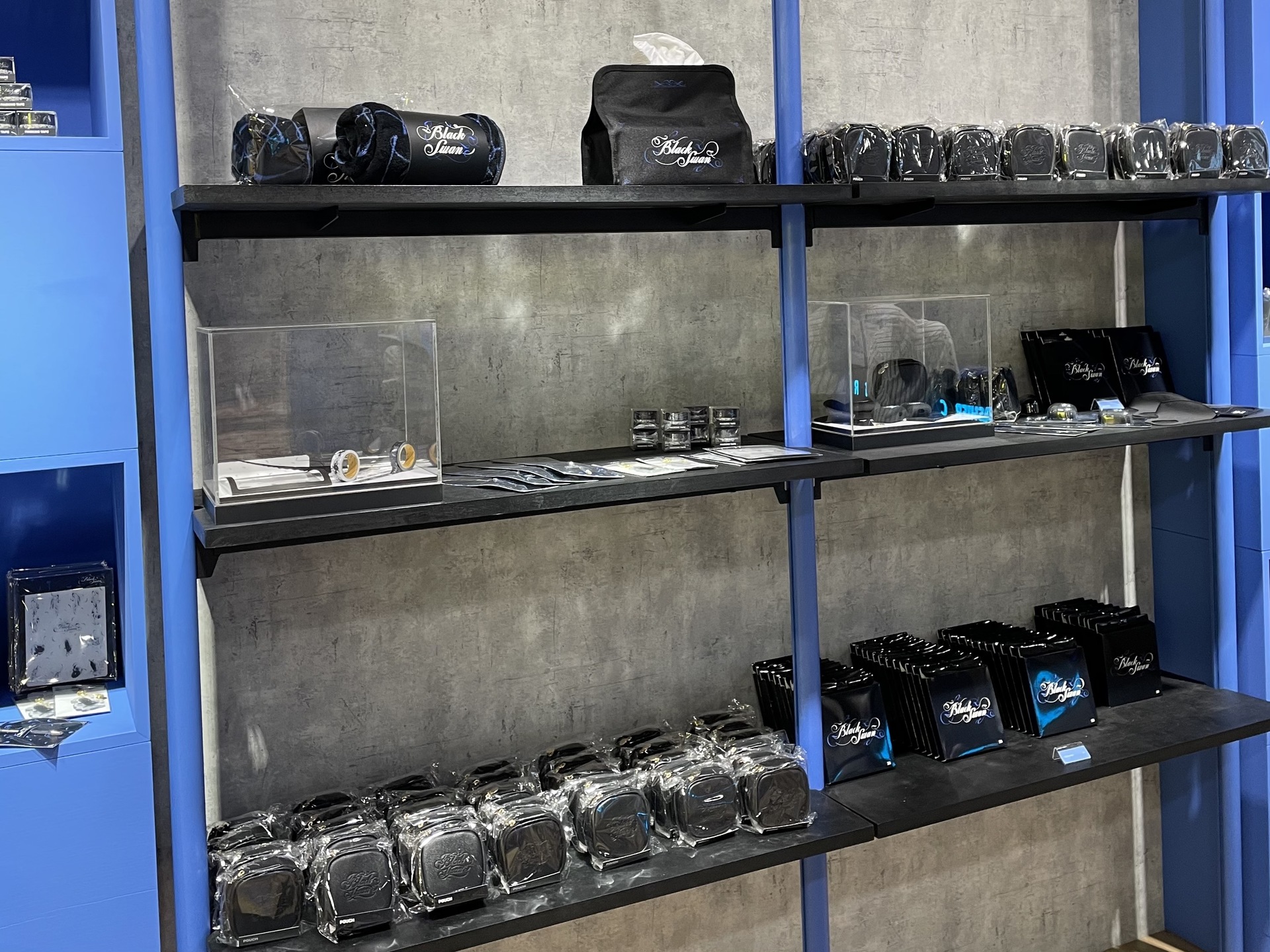 There is certainly something for everyone on the shelves. Fuzzy blankets to keep us warm on a Spring Day, and tissue box sleeves to dry our tears when we get too emotional about BE's release this Friday (20/11). 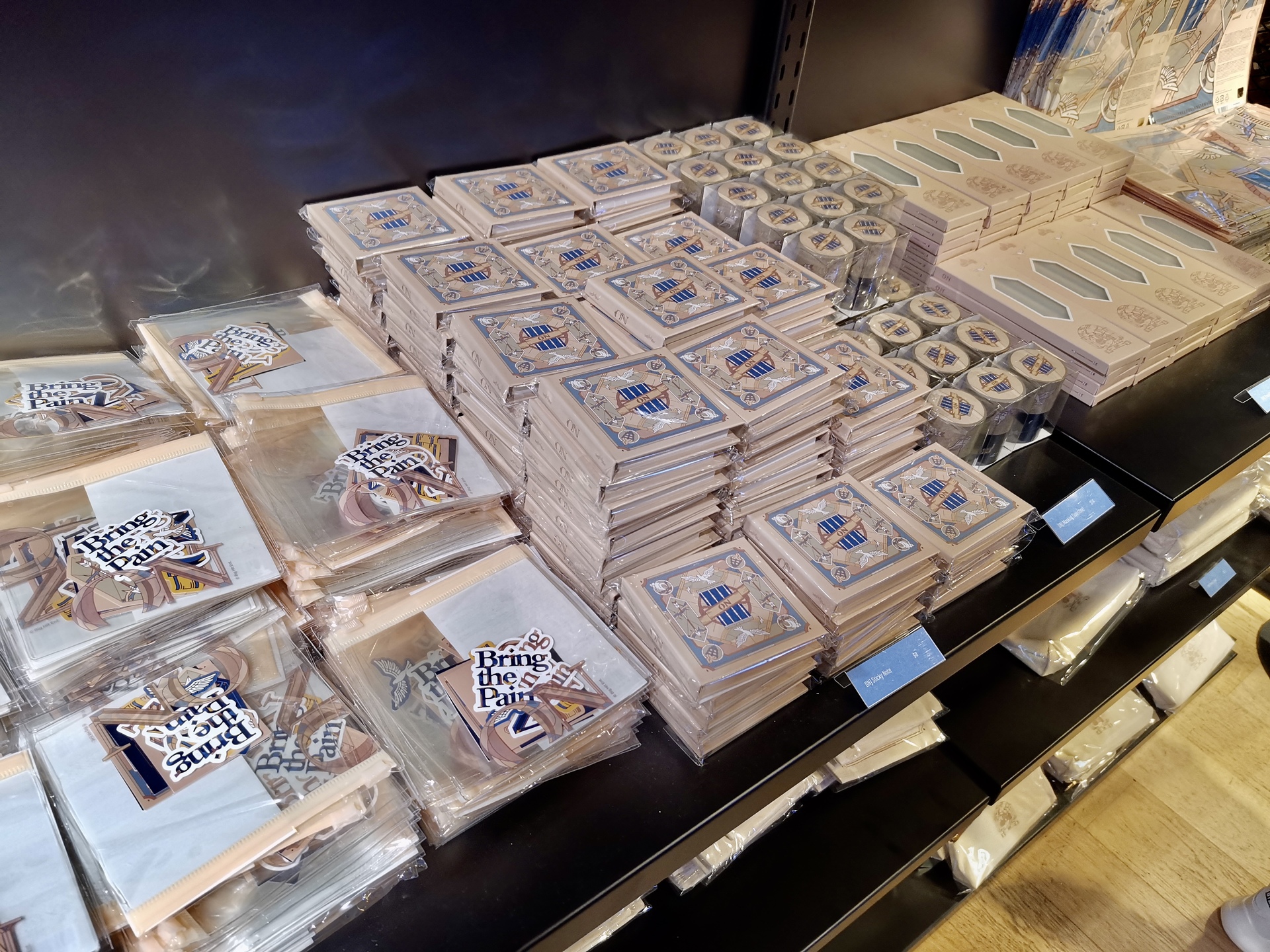 A stark contrast from the thematic colour schemes of blue, black, and white found on the rest of the showcase, ‘ON’ comes with neutral tones of beige and pastels in their range of stationery. Whether you’re keeping a BTS scrapbook or your personal bullet journal, the range of stickers, notes, tapes, pens, pouches, and more are sure to satisfy anyone with an affinity for art. 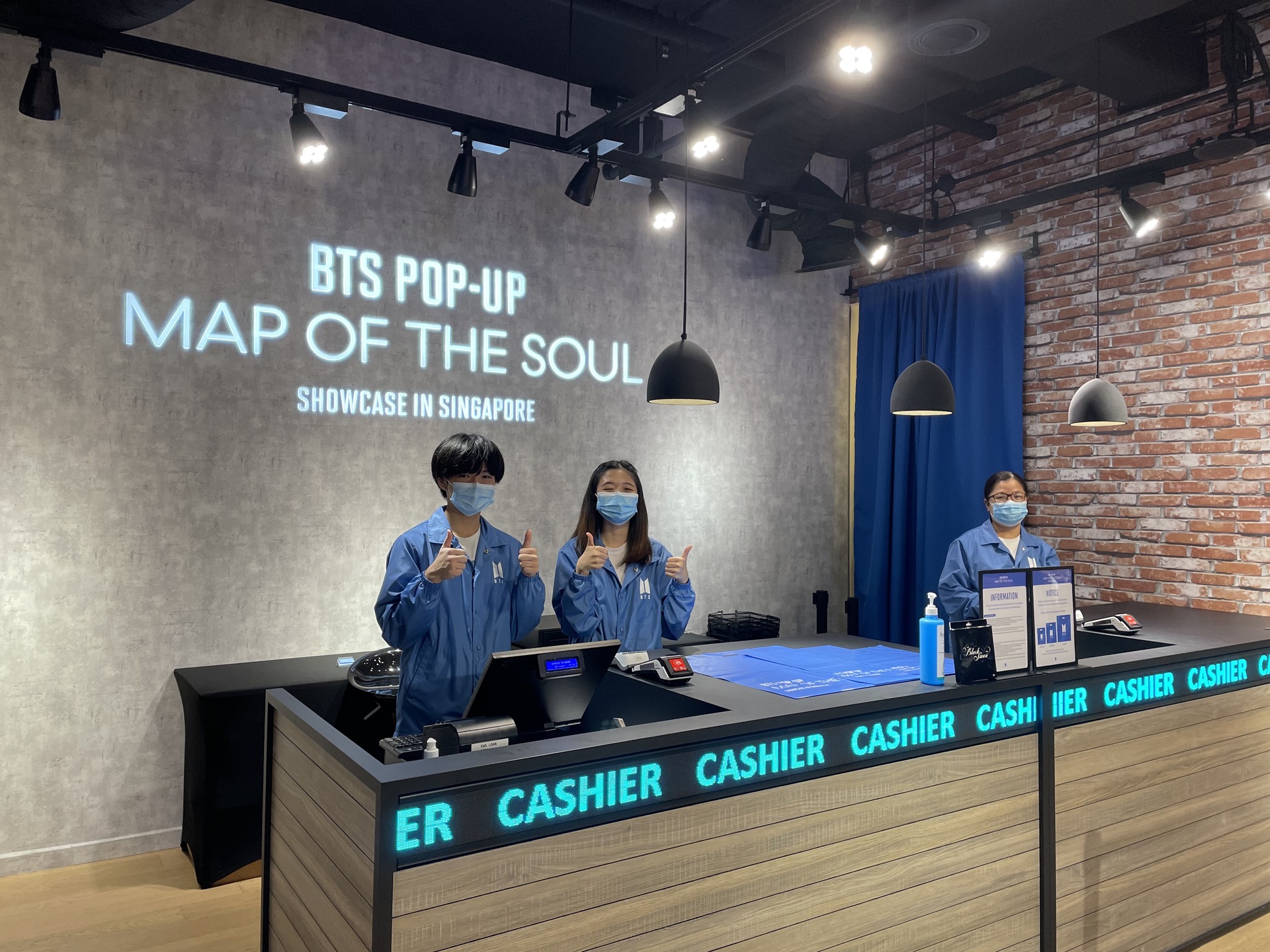 When you are finally contented with your loot for the day, check out your goodies at the cashier where the friendly staff will pack your items and ensure you abide by the maximum product cap. Each visit ends with a blue BTS bag, along with the door gifts that include a slap wristband and postcard.

After seemingly endless photo-taking and shopping frenzy in the pop-up, some of the fans were still evidently reeling from the eye-opening experience.

Bandwagon mingled outside the store for a bit and spoke with several fans on their merch haul for the day, highlights of their BTS journey, favourite moments as a member of the BTS ARMY, and more. 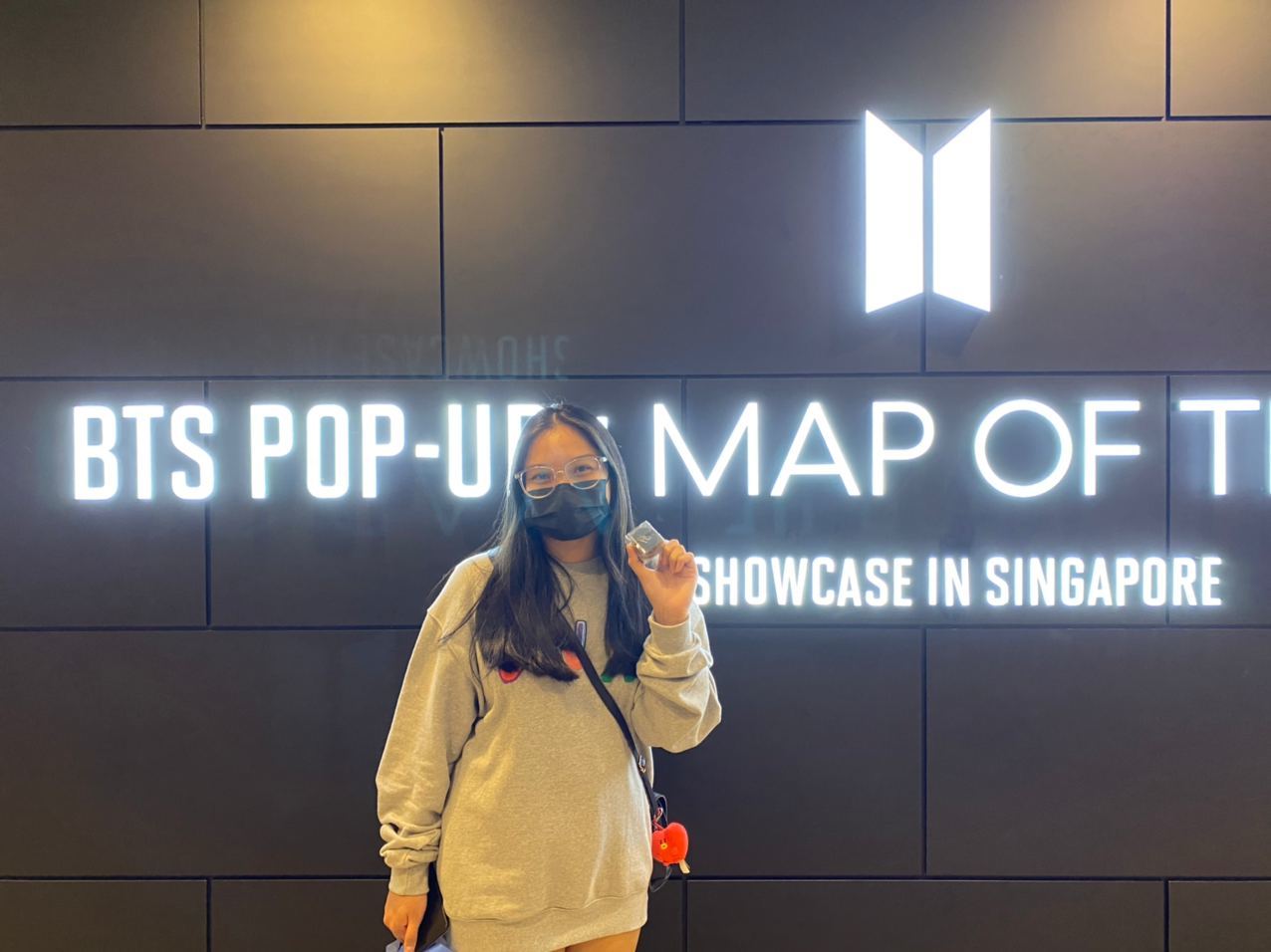 I started to know about BTS when they were really new to the whole K-pop industry, which was around 2013. I have been a fan of K-pop in general since I was about 13 years old. It went all the way back from like, BIGBANG, SNSD – that generation. I was just scrolling through and I found out… I ended up clicking on BTS’ first music video. And that's how I found out about them. I’ve been a fan for about seven years.

In this BE era, I heard the members contributed a lot in making the album, so I really look forward to what kind of music they will be able to bring, especially during this pandemic period, where people kind of just need the good vibes around since there's a lot of things happening.

I guess my favourite BTS memory was... It was during the Love Yourself concert in Singapore. I didn't attend the concert itself, because I made a promise with my sister that I will go to the BTS concert with her. I wasn't able to go, but I went to buy some merch because I started to get into merch during the Love Yourself era, because I started to also gain more army friends. I was really curious about what kind of merch they bring in for the concert, and I just wanted to get a feel of the concert vibes with my friends.

What's in your bag?

I bought the ‘Black Swan‘ masking tape. Because apart from K-pop, right, my other interest is stationery. I like stationery a lot. So, whenever they come up with stationeries, my first intention is to get any masking tape. Yeah, it's something that I like. 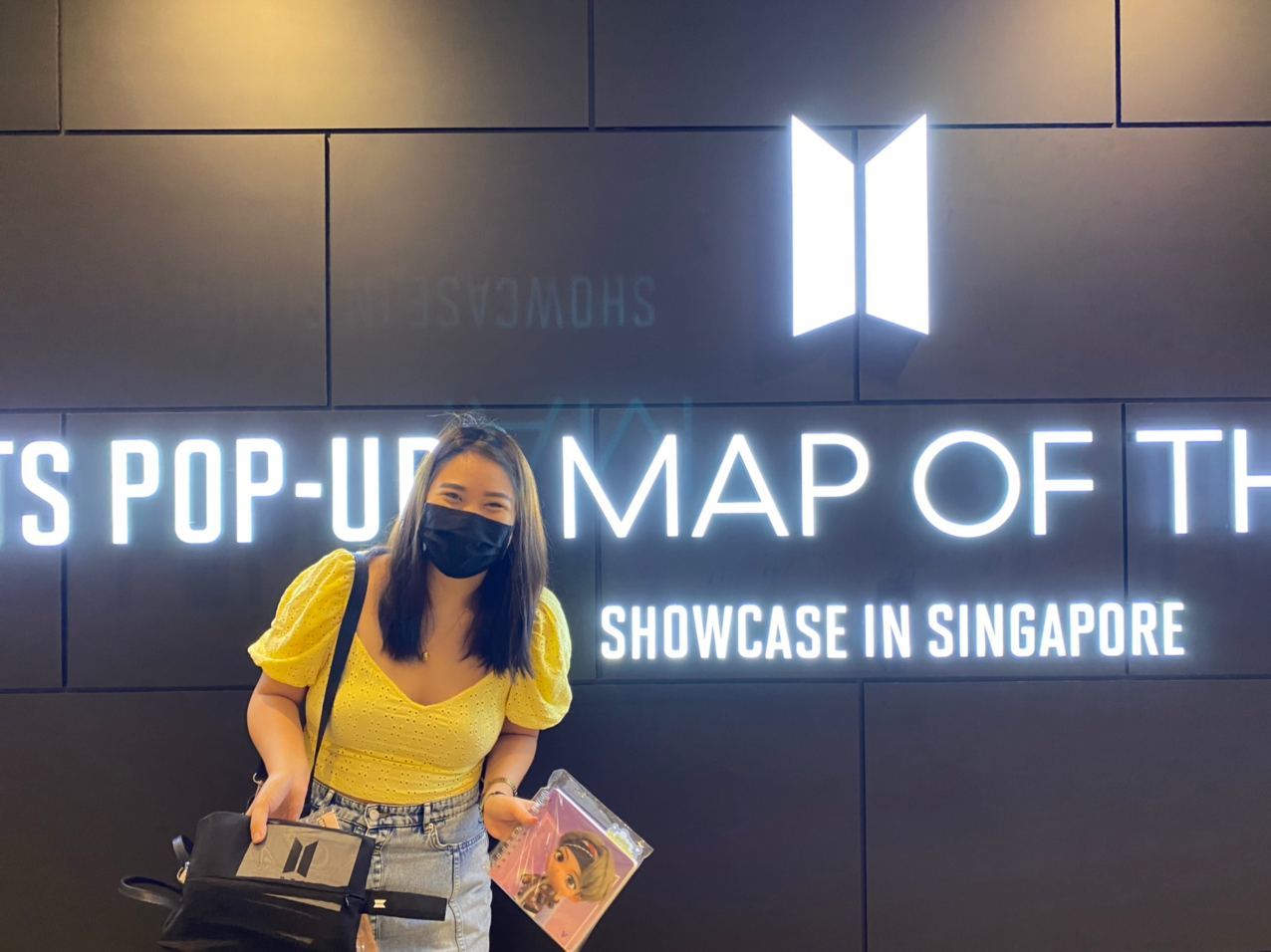 It goes back to 2017. I saw the interview on Ellen, and then at first, I was just like, okay, the beat was okay. I saw ‘MIC Drop’. Then after that, about early 2018, I saw the series Hwarang – V was there, together with Park Seojun. And that's when I started doing research about them.

I’m looking forward to new music, and maybe another online concert in the future, if the pandemic is still [ongoing]. If not a mini-concert [if possible], also.

Oh, memory (laughs). I don't really have one because when they had the concert here, I wasn't able to watch it, because I was back home. I was in my hometown. So I wasn’t able to watch it. But maybe, the memory was when they released the Persona album. Yeah, Map of the Soul. And when I first heard Yoongi’s – Suga’s – ‘Shadow’, it was eye-opening for me.

I bought a towel, a logo towel. And I bought a notebook (laughs), a Tiny Tan notebook with V, my bias (laugh). An ‘ON’ hanky, because I love the colour, and my second bias, Yoongi. 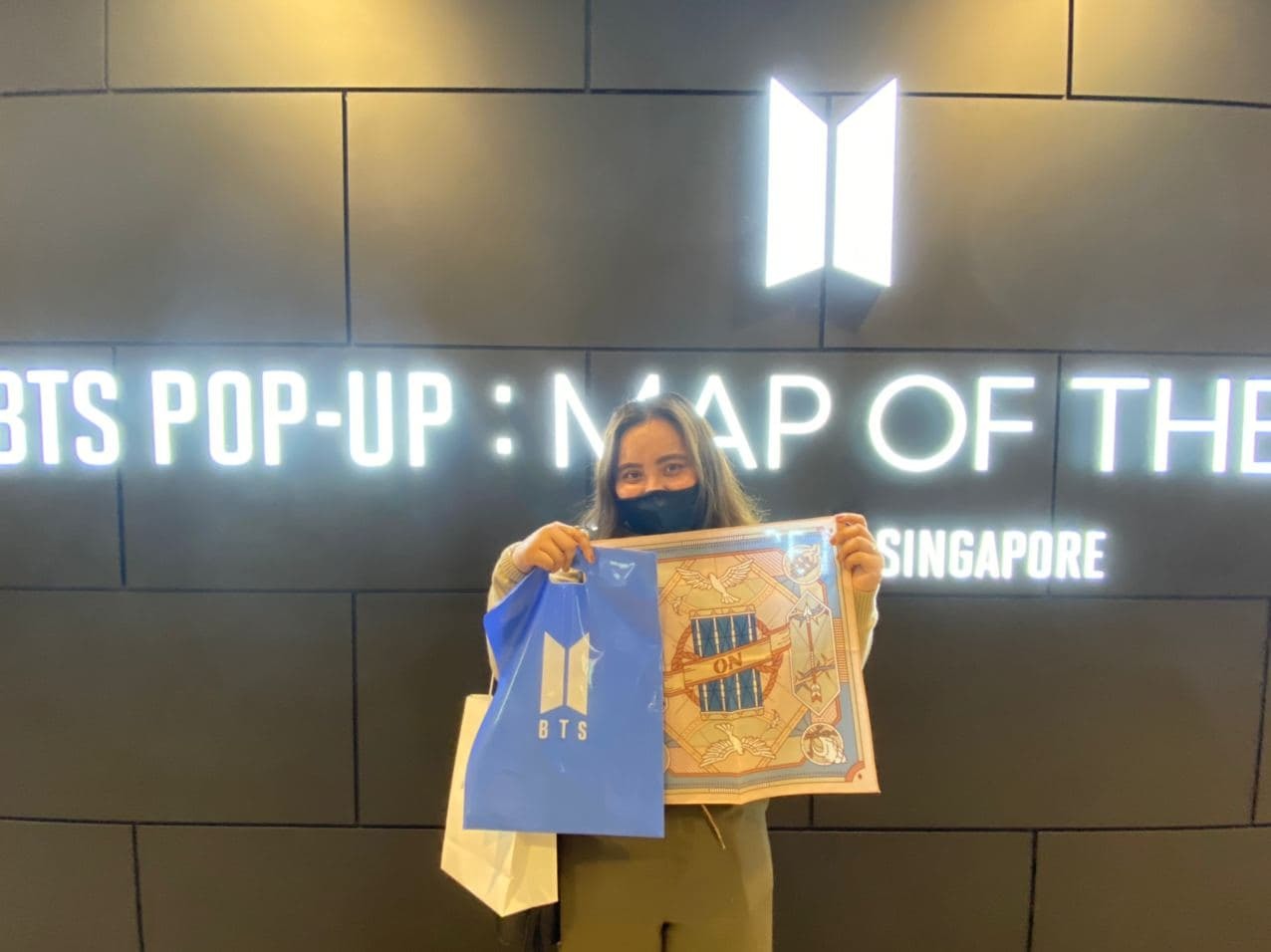 In early 2017 when ‘MIC Drop’ got released, I heard the song when I was still working part-time, and that's when I really started to do more research on them. What struck me was that at the beginning, they weren't really a huge group yet but they chose to bring up topics that most people never in the industry. The most important thing is how they're so involved in it, in every single thing, not just as a group but even the company and how they work together. I think that was really what captured me.

Honestly, I don't mind anything. When it comes to music, I am all for it. Because for me, I look more into the involvement of the artists in the music, for example, how do you write, the meaning behind the songs... So whatever they offer, I will accept and I like to be surprised! (laughs)

The 2019 Love Yourself concert was one of them especially because I think that was one of those times where I actually let out who I am. People normally know me as a very quiet and chill person. But during the concert, I was like letting myself out, like that was me, I was able to be my true self. Even though I was at the seats, I was dancing to the songs.

I bought a little ‘ON’ handkerchief, I was really eyeing this since the beginning and we would be coming back here again because we heard there will be new merch releases every week. 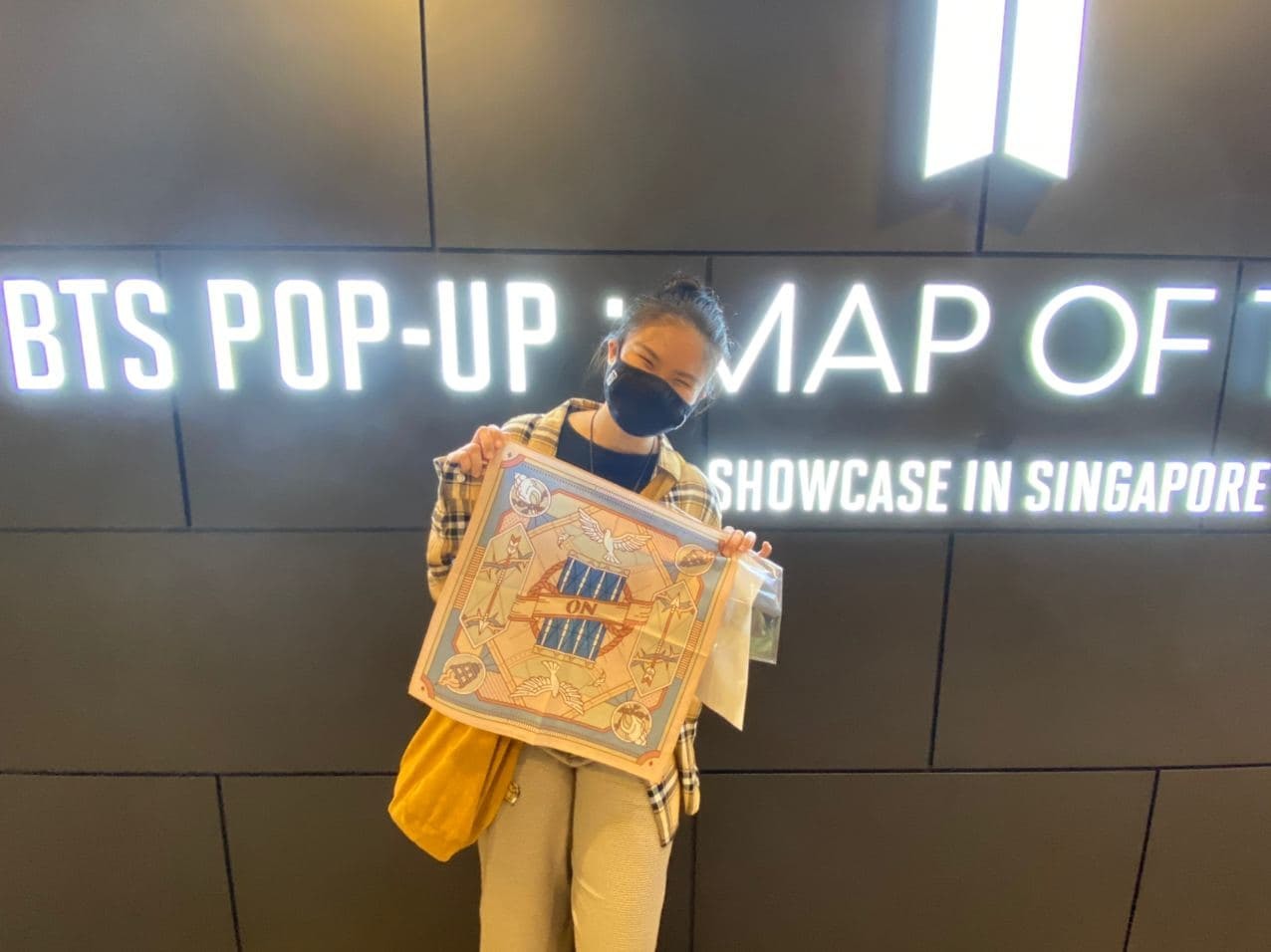 I wasn't really a fan of K-pop at all until, in 2016, my friend told me to watch the ‘I NEED U’ prologue and the ‘RUN’ HYYH storyline. Then, I started getting into them because they were talking a lot about mental issues and youth, and I thought I resonated a lot with the music and messages they had. After watching more videos, I thought, oh these boys are really cute and fun, and they're very sincere.

I think it was right for me to support good people who choose to do good and spread love around the world, I like the fact that they are also spokespersons and ambassadors for UNICEF End Violence campaign. That's super amazing of them. That's why I don't only admire them, I also want to keep supporting them. Because I feel like even though I, as just one person, can't do anything, but by supporting people who can do something like BTS, I'm doing something good as well.

To hear ‘Blue & Grey’. I also trust them enough that I will accept whatever they give because I know there is quality in their music.

2019 Love Yourself concert. I met so many like-minded ARMYs, and it was then that I really felt a sense of community among the fandom. It was very fun even though it was a hot day, people were bringing out welfare packs and sweets and just supporting each other. Oh and during the show, I was at the barricade and they were dancing on this moving platform, Namjoon looked at me straight in the eyes, and I felt so seen! (laughs)

The ‘ON’ handkerchief as well! This was like my first priority, and we will also be coming back again for new merch.

Note: Joy and Kyra are friends who were interviewed together.

BTS’ Map of the Soul showcase is held at Plaza Singapura, #01-08/09, between 10AM to 10PM daily until 14 February, 2021. Pre-reservation slots for store visits are available every Friday. Find out more here.