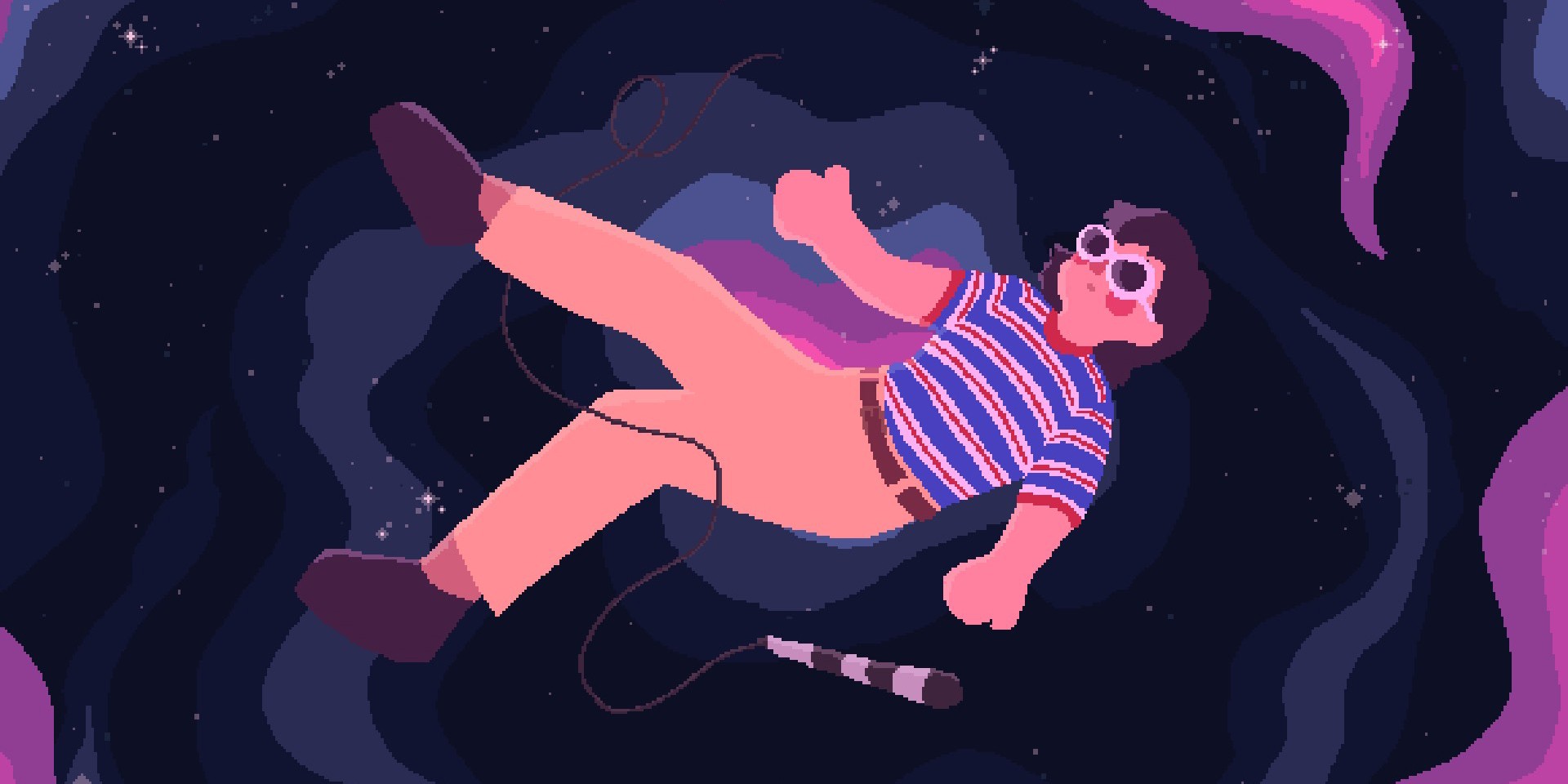 Back in July, when IV Of Spades frontman Zild Benitez dropped his surprise debut solo single 'Sinungaling,' the music scene erupted with excitement. Fans were quick to share his Arctic Monkeys-inspired music video and it wasn't long until fan art surfaced. Among these posts, it was the 8-bit Choose Your Fighter animated piece by 15-year-old artist Kirsten Paige (a.k.a zanyuhhh) that ultimately stood out from the rest.

"I tweeted it on my account last July and Zild, Shanne [Dandan], and Daniel Aguilar liked the tweet," Kirsten tells Bandwagon. "I was freaking out I didn’t expect that they’ll see it."

And by the combined powers of fate and good fan girl karma, Zild reached out to her and asked if she'd be interested in working with him. It was perfect timing, too. He'd been working on his solo debut album Homework Machine at the time, which was heavily influenced by the sounds and tones found in retro video games. Kirsten simply visualized it on Procreate, without knowing Zild's sonic inspiration for the album beforehand. 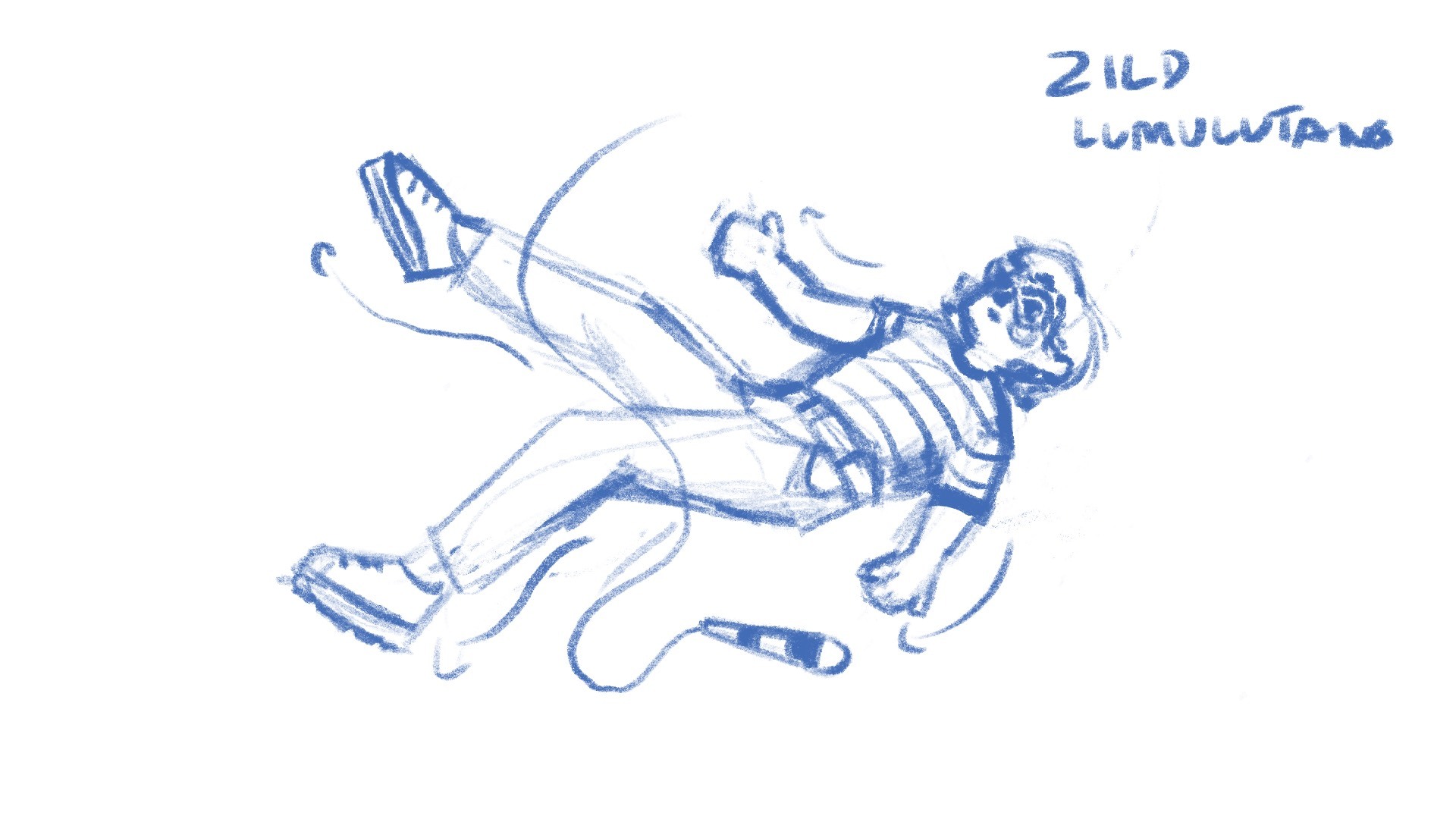 "They gave me the concept/the scene (e.g, zild nagluluto, zild lumulutang) and the character that I’d be using (Zild na clown). Other than that, they gave me the freedom to do what I see fit for the song," Kirsten reveals. "As long as it corresponds to the concept that they came up with. Kuya Daniel guided me throughout the process."

Bandwagon caught up with Kirsten to talk about the tracks off Homework Machine she blessed with her wicked art.

The scene for this was “Zild with punching bag boxing.” I was having trouble with the background because I wasn’t sure about what I wanted to draw. It was looking plain. In the end, I just added a pattern similar to 'mapagpanggap.' The actions was inspired from the MV of 'Shape of You' by Ed Sheeran. I recall loving the scene where Ed Sheeran’s boxing was in sync with the beat. I did my best to sync the punch to the snare.

Another thing that caught my attention was the whispers. “Pinag uusapan ka nila,” it made me imagine someone walking by a crowd, feeling that the people around them are talking about them. I wanted to portray how it feels. It feels like someone is whispering by your ear and it makes you feel uneasy. That’s why the animation for the whisper was brief.

The scene for this was “Zild nagluluto,” as I was sketching the layout of the scene I thought about the food that he was cooking. I wanted it to mean something or to reference something. And then I remembered about the commercial he did when he was younger. It was a song about pancit canton combinations. In the animation, the food that he’s cooking is pancit canton with tuna a.k.a pantuna but with veggies (para healthy).

Moreover, if you look at the background you can see a note “panpan.” I also kept the mic in the background. I had some trouble with the pose of the character itself, I wasn’t sure if it should be facing the camera or should it be sideways. I had my sister pose for me as she was cooking our lunch just to see how she moves and so I can come up with the actions.

I used the frames to portray Zild’s mother and himself growing older. If you look at the frames closely you’d notice that at first, there is a baby and a mother taking care of him. And then as the song progress the baby is now grown and is the one taking care of his mother.

The scene for this was “zild drinking coffee”, for the actions, I took a scene from 'Dila' as an inspiration. I also wanted to show that the character is “contemplating”, looking back to all those memories and reminiscing. I also wanted the atmosphere to be calm that’s why I used the color blue with yellow highlights.

This song made me think of Galaga and I really love the beat of this song. This was the first one I worked on and the one that took the longest.

This was my first time to animate a run cycle. I had to redo it four times before I figured it out. It took around 60 hours just to finish the animation. I really had a hard time with this one. Especially the stripes, I even wore stripes as I was drawing it just to familiarize myself with how it looks when you move.

Originally, I wanted it to be running from the back view but I didn’t feel like it fits for the song. For the background, I wanted it to feel like the world was ending. I wasn’t quite sure what colors to use but I leaned towards galaxy colors like purples and pinks. When I finished coloring it I didn’t really like how the colors were so bright and so I turned down the saturation. But then kuya Daniel asked how the project was doing and I sent the colored piece and he said to make the colors more vibrant. And so I had to up the saturation once again haha. And I realized that wow the colors looked muddy before and looked so much better now. Thanks to his notes, I knew what direction to go when choosing colors.

Out of all of the animations this is probably my favorite and the most fun to do. I love how the colors looked. I was struggling with the background at first but then I allowed my self to get loose and just have fun with it.

The scene for this was “Zild lumulutang” I have always been a fan of space and so the first thing I thought about was an astronaut floating in space. A quote from the song caught my attention “Samahan niyo na lang ako, sa mundong aking binuo.” I wanted to show that Zild is in his own world.

The scene for this one was “Zild natutulog.” I was very indecisive when coming up with the pose for this one. The first sketch I made looked stiff, not really relaxed. I tried different poses and I struggled so much that I had to take a picture of myself as if I was sleeping. Then I finally figured out the pose! I really liked how it looked.

The scene for this one was “Zild with sunset”. I wasn’t really sure how I was going to draw the sunset but the title itself gave me the idea to really have the sun gone to the point where you can no longer see it. As the song progress, it gets darker and gloomier. And at the last part I really wanted to emphasize that it was “the end of the world” or I guess to give an apocalyptic feel. As this was Kuya Daniel’s notes to have more smoke; to give an apocalyptic feel.

When I was animating the sun setting, I didn’t want it to just set smoothly. I wanted it to be kind of glitchy and jittery, I just felt like it fits with the song plus that would take much more time haha. I actually watched a video of a sun setting on YouTube just to see how it looks.

This animation is one of my favorites. This was also next to 'Iiwanan ang Lahat' when it comes to the time it took to animate. When I was working on this I was actually feeling burnt out. In the two weeks I spent on the project my schedule was eat, draw, then sleep. It’s no wonder I felt that way. But thank goodness I finished it and I enjoyed the process of making it.