The BTS Meal has taken the world by storm since its rollout earlier this year.

Comprised of 9-piece or 10-piece Chicken McNuggets (depending on your location), Large World Famous Fries, a Large Drink, and Sweet Chilli and Cajun sauces, the BTS Meal first launched last May, with a staggered global release in 50 countries.

As expected, the meal received an overwhelming response from ARMY (fans of BTS) and fans of McDonald's. In the Philipines, close to a million meals were sold on its first week. Malaysian and Indonesian ARMY prepared gifts for McDonald’s crew members and essential workers, and several entrepreneurial minds sold the packaging at exorbitant prices in Singapore.

Throughout all of the excitement and chaos, a number of BTS fans have begun to find new and innovative ways to preserve their BTS Meal packaging. We spoke with five creative individuals to discuss the inspiration and process behind the designs they have created. 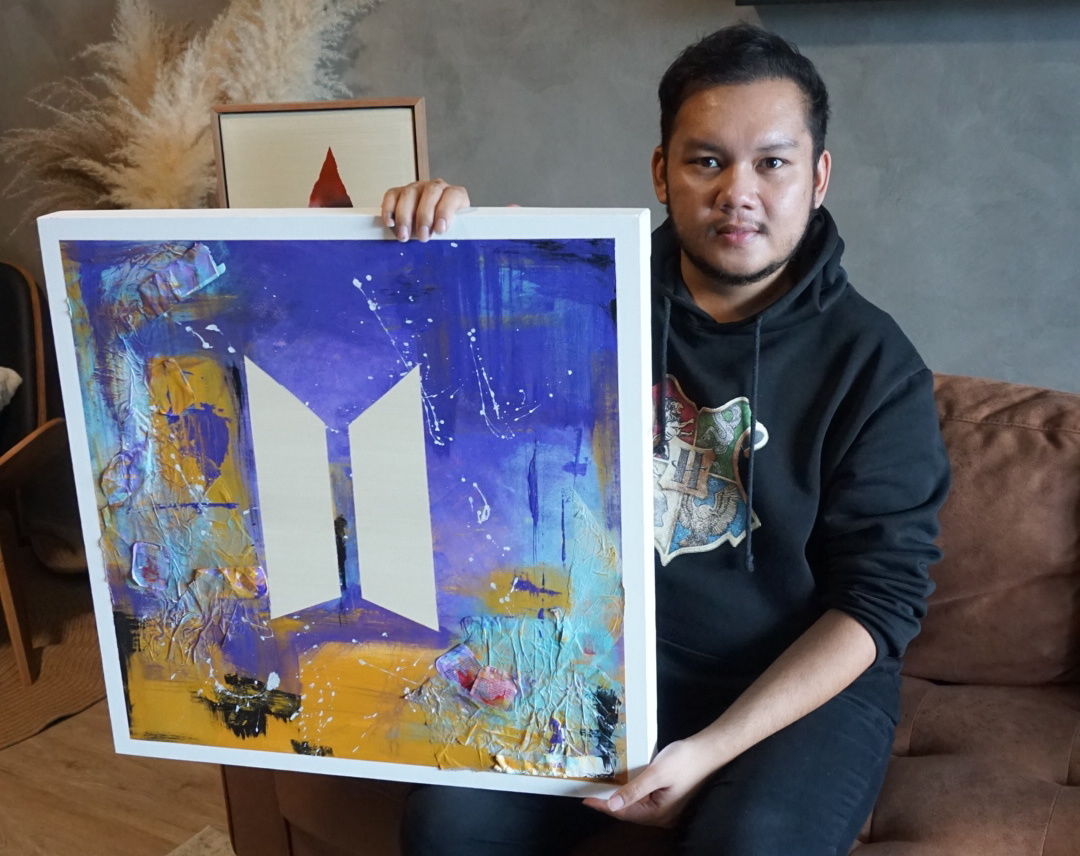 “The moment McDonald’s introduced the BTS Meal, I could see two types of people online – those who look at it as a treasure and those who treat it like ‘trash’. I was more interested in the former,” Faizdickie said. A BTS fan himself, the social media influencer whose real name is Mohd Nasrul Faiz Abu Azal, created a beautiful painting with the packaging.

Seeing how ARMY has repurposed the packaging, Faizdickie was inspired to create his upcycling project. “Since art has always been my passion, coupled with the fact that I’m currently into paintings, I thought perhaps it’s a great idea to turn something that some people considered as trash into treasure,” Faizdickie explained.

Hunting the BTS Meal was tough for him. Faizdickie had to go to three McDonald’s outlets in Malaysia before securing it for his painting. The painting took him four hours to complete. Once he has painted the canvas, the packaging was torn and glued to it.

Calling the painting The Army of the Galaxy, it features the official logo, with splashes of yellow and purple paint in the background. Commenting on the colours chosen, Faizdickie said: “The packaging was then torn and glued to the canvas. I chose the colour purple to represent BTS and yellow to symbolize their new song – 'Butter;'.”

Eventually, one winner emerged from the giveaway and Nadeema Kamaruddin was picked among the 1000+ submissions for the giveaway. Explaining why he chose her, Faizdickie said: “I was touched by her comment where she mentioned that the painting will be a sweet memory of her and her daughter who shares the same love towards BTS.”

Filipino radio DJ Jazmin Reyes channelled her love for crafts and fashion by using the exclusive paper bag and soda cup design to create a summer-worthy look that consists of a bucket hat and a saddlebag. “I enjoy creating crafts and it extended to fashion as well,” Reyes commented. “I wanted to make something that all fans can recreate so they can rework/preserve their favourite BTS items into something different!”

Describing the process of designing the fashion pieces, she said: “The bucket hat was an extension of marrying the two. I have also crafted the saddlebag with the help of @camera60studio‘s pattern. I was able to make a Krispy Kreme version and a Jollibee version too.”

Reyes also added: “The hat was interesting to make because I wanted to be able to preserve the paper bag and since some areas of the bag are torn, the easiest way was to cover all sides with packing tape. Surprisingly, the hat is waterproof and comfortable on the head. The bag is tiny, but micro bags are in at the moment!”

Take on the streets with the BTS Meal. Singaporean artist Josiah Chua puts his spin on the BTS Meal packaging by upcycling it to create a custom shoe design.

“The inspiration is really to recreate something exciting with the BTS Meal packaging,” Chua said. “I was working on a deconstruction project and had a few sneaker soles lying around and that became a spontaneous choice to create a pair of BTS Meal sneakers.”

Detailing the process of designing the sneakers, Chua explained: “The packaging was washed and cleaned, thereafter broken down into flattened canvases. The pieces were then cut out based on my sneaker pattern design. After I have the breakdown on the patterns, I proceed to ensemble the pieces together to form the sneaker.”

It may seem comfortable on pictures, but Chua assured that it is a different feeling behind the lens. “Because it's paper, it's stiffer than your average sneakers made out of textiles,” Chua said. “But it really looks as ridiculous as it is cute when I first tried it on.”

Creating sculptures and mixed media artworks is Raymond Guevarra’s speciality. When the BTS Meal dropped, he designed a toy robot with the soda cup and chicken nuggets box. The Filipino artist is known for his distinctive artworks influenced by video games, movies, retro toys, and his love for ’90s pop culture.

“I did a robot cause I love robots,” Guevarra said. “I’m a mixed media artist, and making artworks in unusual things is my forte. The BTS Meal packaging is a really nice material to create one. It’s fun doing art and I really enjoyed making this piece.”

Shortly after he posted the robot on his Instagram page, it went viral and received positive reviews from netizens and was featured in numerous publications. Recently, the robot was sold in an auction for PHP 25,800 (USD 530). “I feel overwhelmed by the love they have shown for my robot. I’m very happy that it inspires people to create their own things out of the BTS Meal packaging,” Guevarra added.

Social media blogger Ana Gonzales preserved her BTS Meal packaging by creating a BTS bomb bag and keychain, which marks her very first upcycling project. Before the meal arrived in the Philippines, she was already brainstorming for ideas on how to preserve the packaging.

Seeing many upcycling projects featuring the packaging online, Gonzales knew she wanted to do it differently from others. “I saw a lot of upcycling projects like tumblers and phone cases, but I was thinking of something different and useful,” she explained. “Since I don’t have a bag for my ARMY Bomb yet (BTS lightstick), and I think the monogram print of the McDonald’s x BTS paper bag will look great as an actual bag so I went for that.”

While working on the bomb bag and keychain, she used whatever she can find at home while watching the replay of BTS’s SOWOOZOO online concert. “Safe to say I was really inspired to create something at that time!’ she said. “At first, I was still planning to buy more materials for the DIY, but suddenly can’t seem to wait to start on something, so I just used the stuff that I already have at home.”