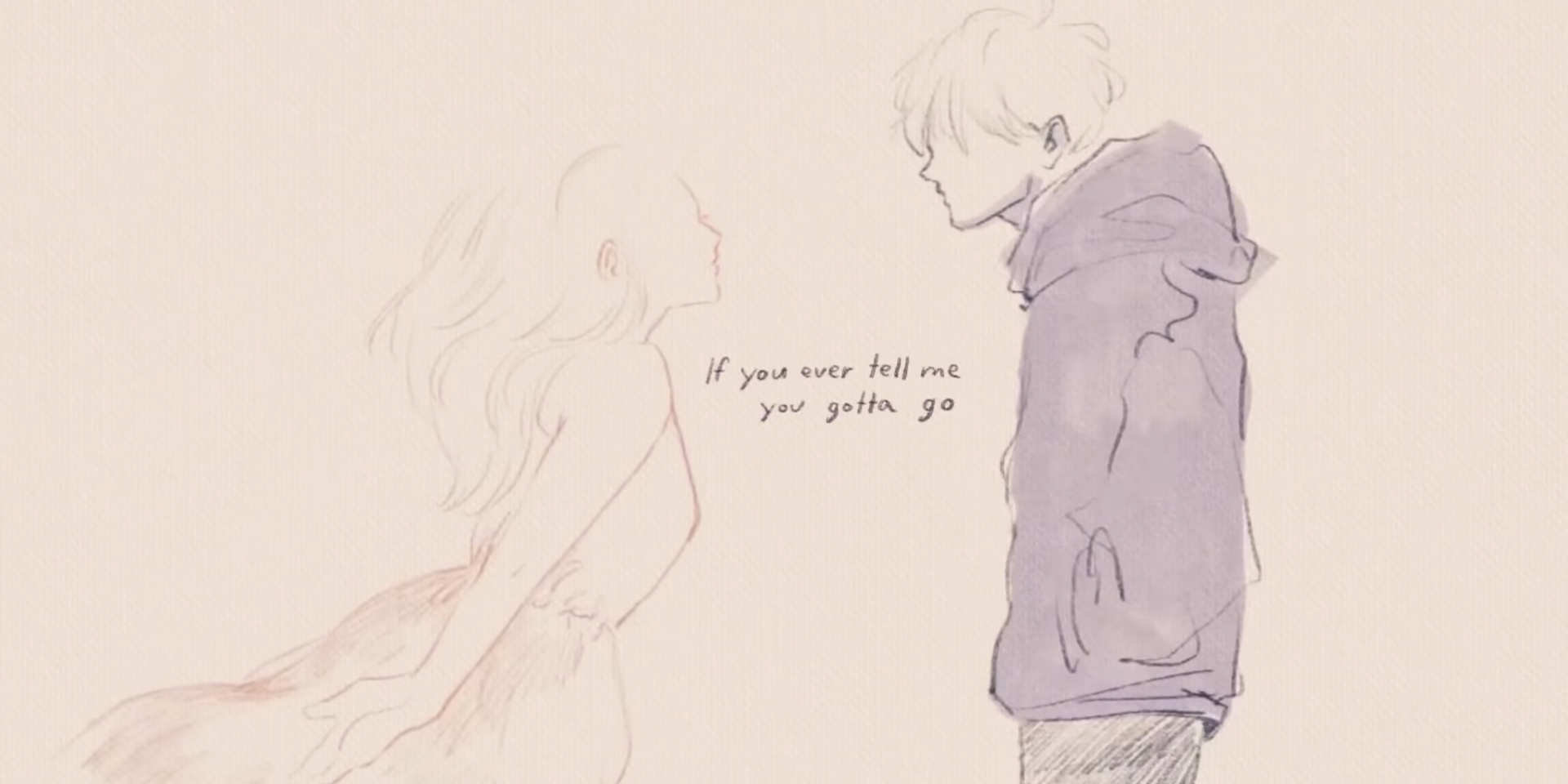 If you've seen the animated lyric video for 'It just is,' Jae's collaboration with Seori and Keshi, you probably caught yourself swooning over the gorgeous illustrations that paint the song perfectly into a visual. It was created by Deisa (TheDayss), a Filipino freelance designer and illustrator and a huge DAY6 fan, whose work caught the attention of Jae himself.

Seori and DAY6's Jae reunite for new collaboration, 'Dive With You' – watch

"It has always been such a dream for me to work with Jae because I have been following their music as DAY6 since 2017," Deisa tells Bandwagon. "They also made me believe that hard work really pays off, and that pursuing your passion is something that is worth believing in."

Bandwagon reached out to Deisa to talk about how she scored this awesome gig, what it was like working with Jae's team, and her process through making the lyric video.

Tell us about yourself and your background in visual arts/animation.

Hi! I’m Deisa, and I’m currently a freelance designer and illustrator from Manila, Philippines. I've been working in small studios and companies since graduation. I did a few design internships (both in Manila and Seoul) and that was the time when I started to get exposed to the media industry.

While I was working full-time back in 2017 as a graphic designer, I had this random idea of producing these illustrated MVs for DAY6’s B-sides. I am an avid fan of Japanese animated music videos on Youtube (Honeyworks was one of my main motivation!) because they tell a story in a span of just 3-4 minutes, and these inspired me to create this mini-project of illustrated MVs. I wasn’t really the best video editor nor the best motion graphics animator at that time, but I still wanted to push through with it, so I just did what I could (I was just a beginner) and published the first-ever fanmade MV project on my channel.

After that, I began to enjoy experimenting on different styles of animation in the succeeding fan-made videos. It was really tedious and time-consuming because I had to balance my full-time work and this personal project of mine, however, seeing the people react to it in a good way and the way that it resonates with them was really heartwarming and it really made it worth it.

I was learning more about animation and video editing as I went along, and it was such a fun experience. I practiced really hard because I wanted to convey all of my thoughts and emotions in the best way possible through the videos that I was creating.

Right now, I’m currently taking up my Masters Degree in Design at Otis College of Arts and Design in Los Angeles, and I’m still learning. There’s just so many things that I still do not know, but it’s exciting to dive into something that’s unfamiliar and new. Music and arts have always played a huge role in my life, and it’s one of the main reasons as to why I am where I’m standing now.

How did you get this gig to create the 'It just is' lyric video? How did it feel to be working with international acts like Jae and Seori?

Last February, I created a fan-made video for Jae’s 'Other Side' track, and I was really surprised that he noticed my tweet about it and actually saw the video!

I really thought that it would end there, because it was just too unimaginable for someone as insignificant as me to be working with an established musician like Jae. To be really honest, I was already happy just knowing that he already saw one of my videos and that I have completed my mission.

However, a few weeks before the intended release of the “It Just Is” video,  I received an email from the eaJ Team. I was so confused because I initially thought it wasn’t legit, but it was really from them. They reached out to me and asked if I was down for a collaboration for an upcoming eaJ release, and imagine the shock I had after reading the email—I was out of words and my mind went blank.

"I thought that we would make a great team." Day6's Jae on 'It just is' his new collaboration with Seori – listen

It has always been such a dream for me to work with Jae because I have been following their music as DAY6 since 2017, and now he’s pursuing his personal project too as “eaJ”. I really look up to them because they’re out there creating music, and doing something that they love. They also made me believe that hard work really pays off, and that pursuing your passion is something that is worth believing in.

Both Jae and Seori are really amazing (including Keshi and everyone else in the team), and receiving this big opportunity was just something that I never expected to happen. I was only just a fan, and I really wasn’t that big of an artist, so it was really hard for me to believe that they wanted me to be part of something as big as this collaboration.

I am thankful though, that they put their trust in me all throughout the duration of the project, and it really meant a lot to me.

What was your creative process like for the lyric video?

First off, I put up together a moodboard where I lay out all the visual and typography pegs, color schemes etc. and sent them over to the team just so they can visualize what I had in mind. 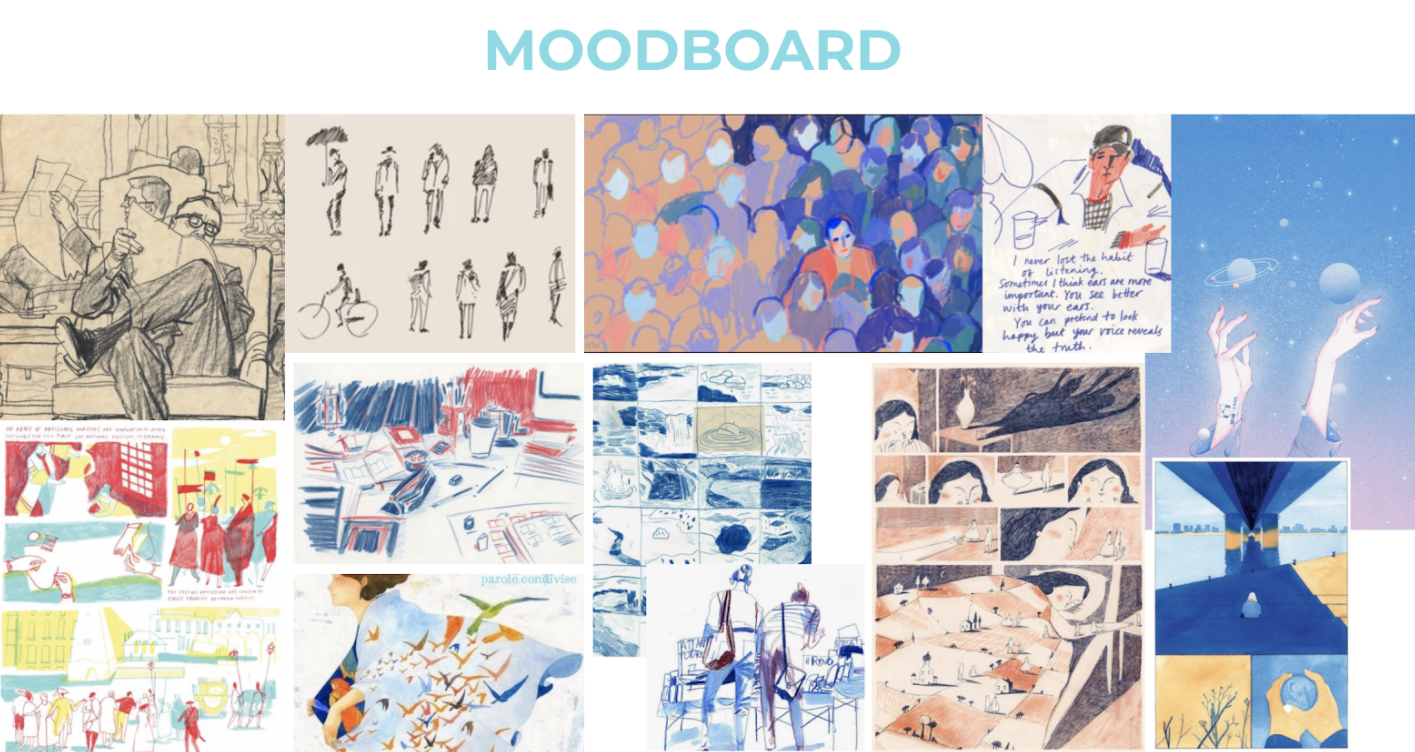 Then once they approved it, I began with the initial storyboard and sketches for each scene. This is actually the most time-consuming part because it was challenging to think of the scenes per line, and connect them. There are tons of ideas, but selecting the ones that could work well with the others was the catch, so I had to scratch off a few initial scenes and change them. 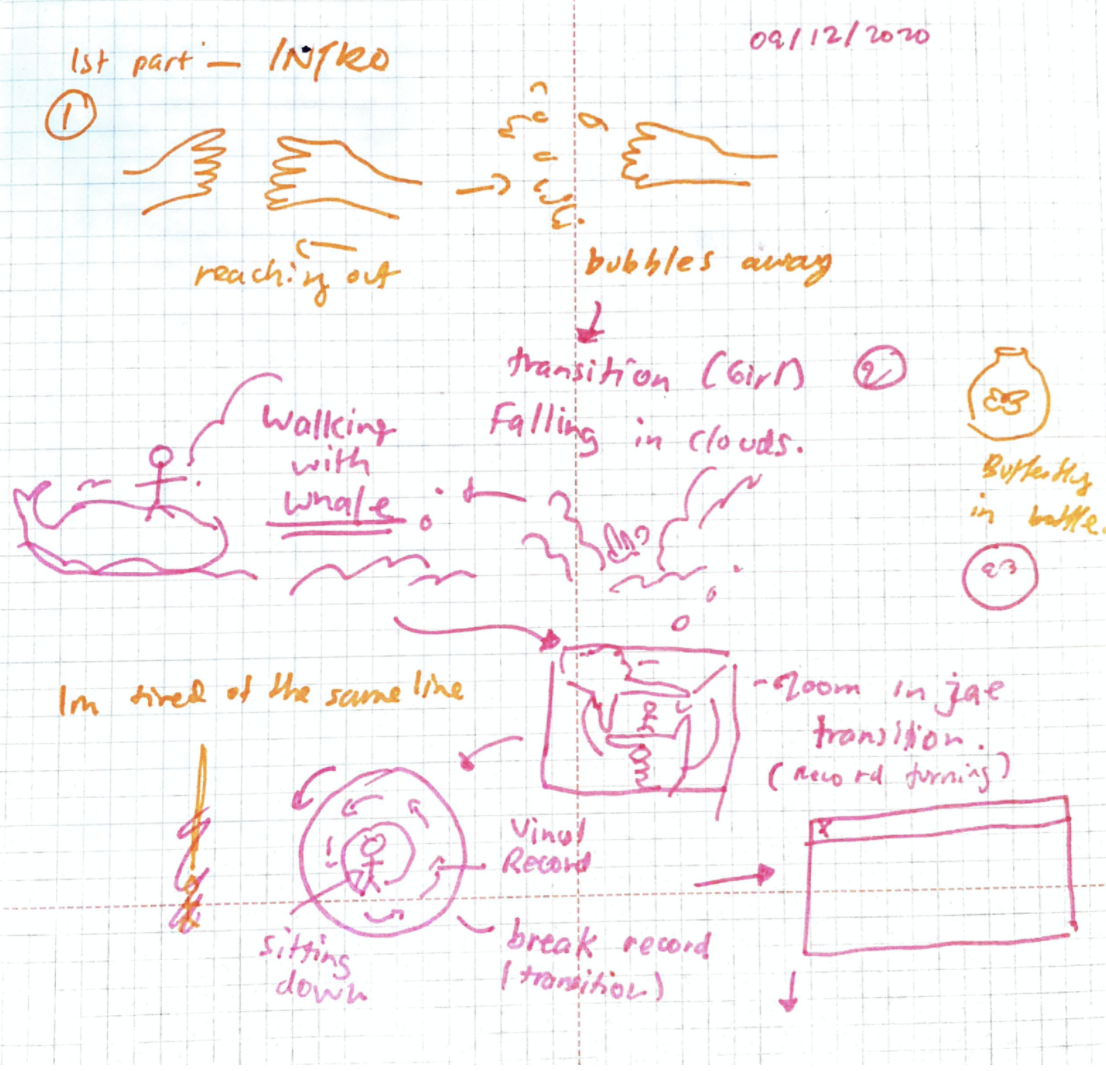 After completing the scenes, I move into creating the animations. I mainly use Clip Studio Paint for the frame-by-frame animations, then Procreate in minimal ones. 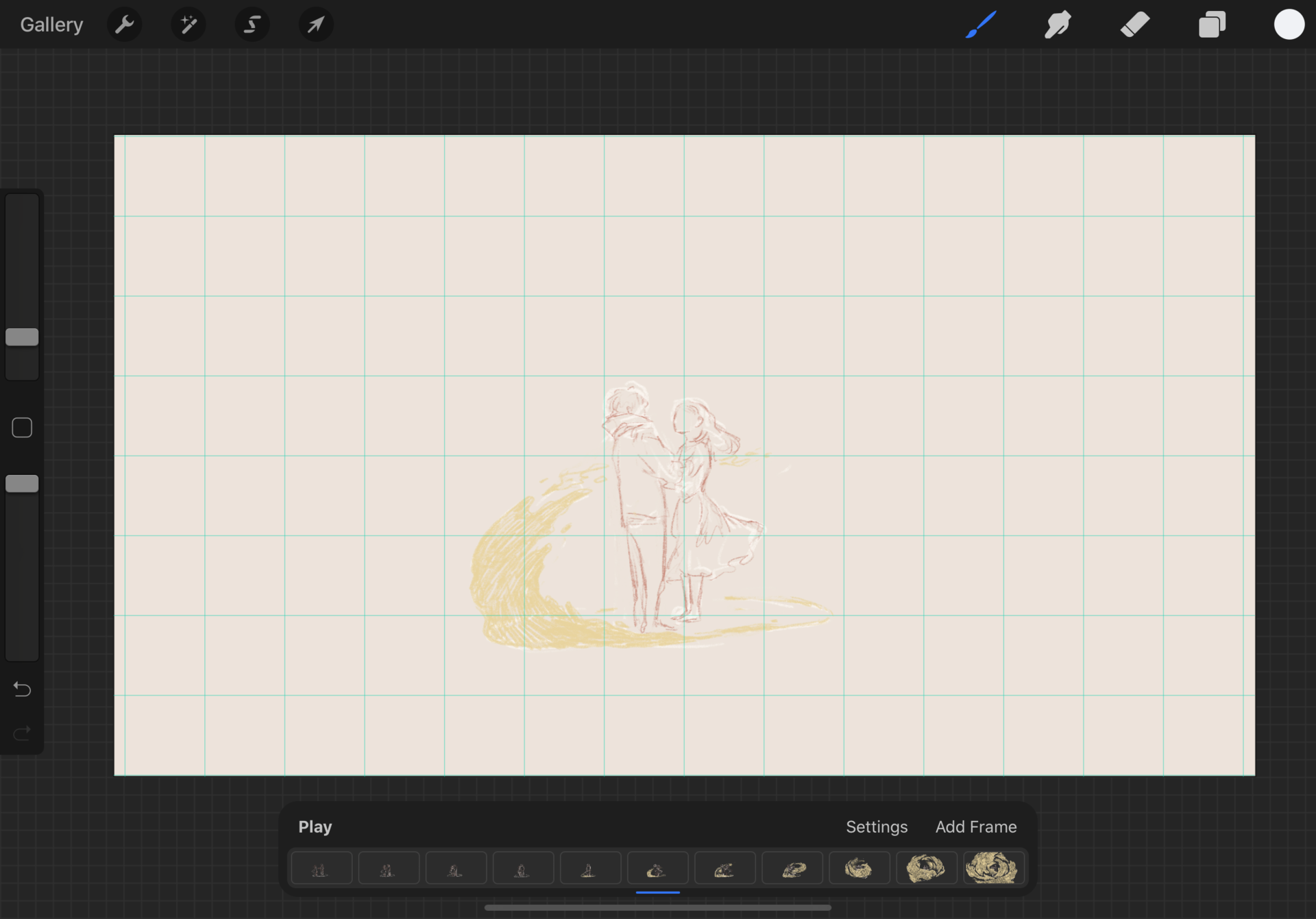 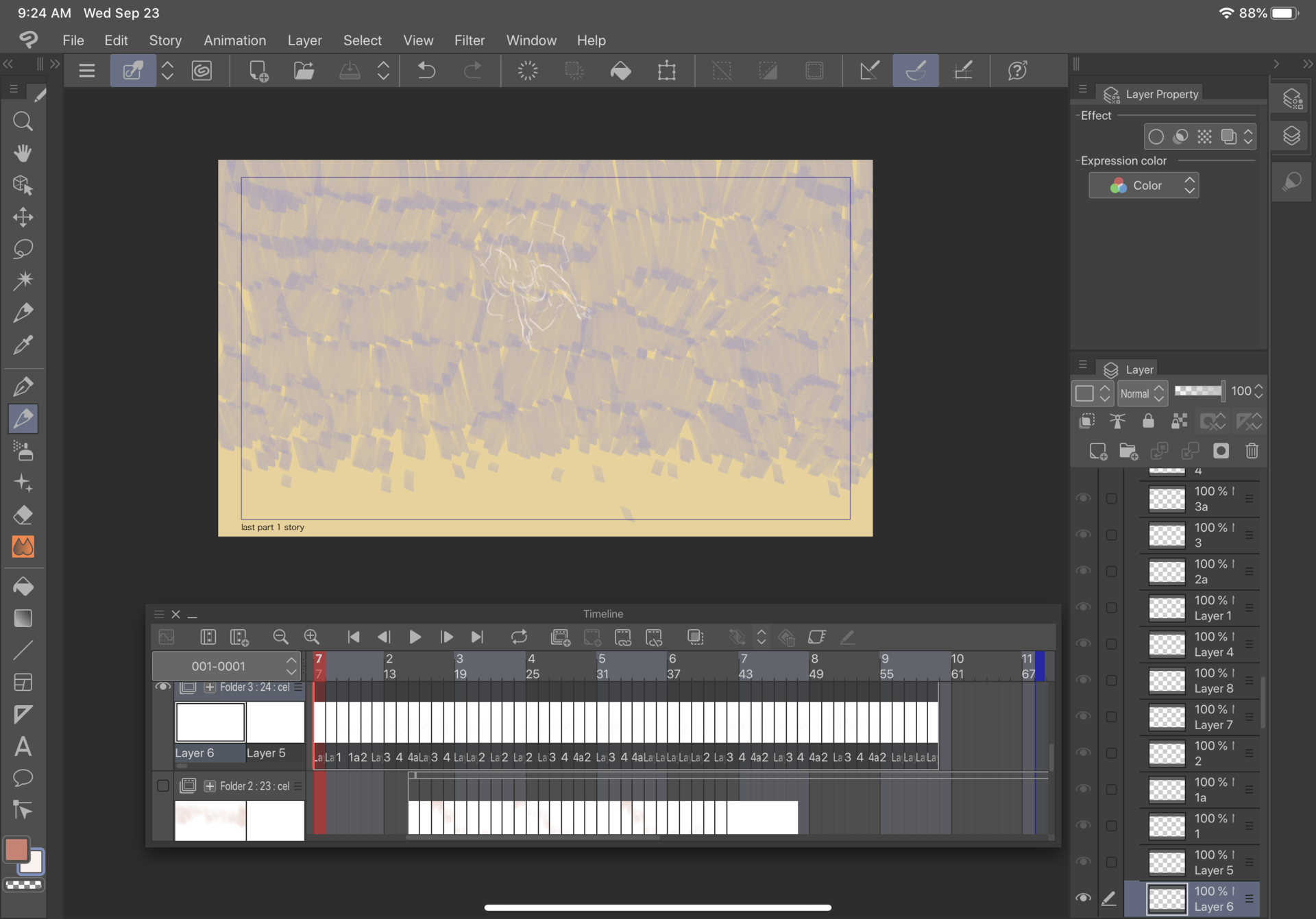 Finally, I send over the first draft to the team, and ask if they have revisions with anything, and then when everything is all revised and checked, I’ll go and render the final video and send it back to them for uploading!

Were you given a lot of creative freedom for the lyric video?

Yes! The eaJ team actually told me that they wanted to see how I would interpret the song, so it was really daunting at first, but at the same time, I was excited to start working on the storyline and style of the video because the track was really nice, and I got really attached to it the moment I heard it. 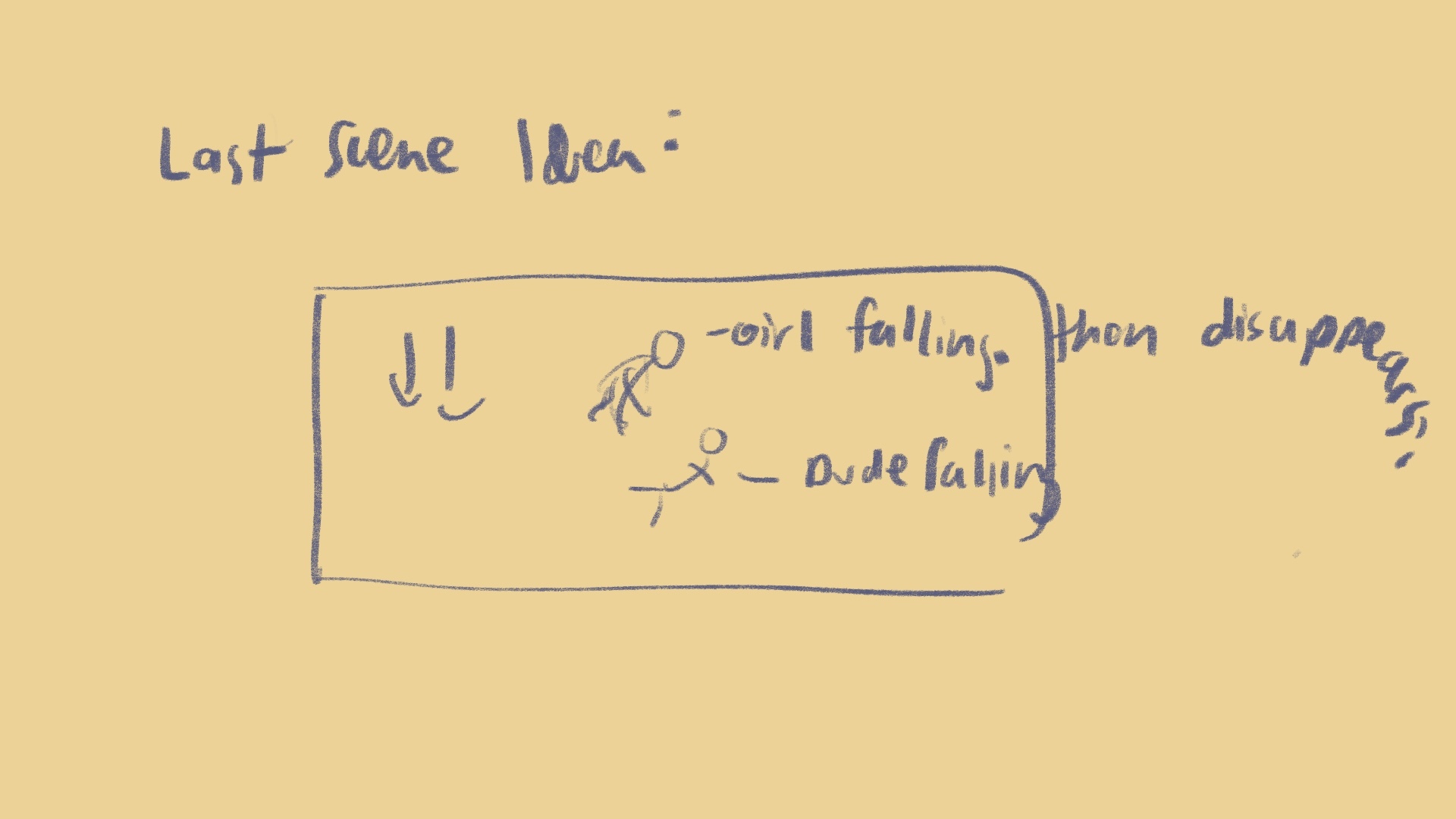 How involved were Jae and Seori in conceptualizing the video?

For this one, I was mainly talking to Jae’s team, and they left the conceptualization and interpretation of the song up to me. However, I still included my thoughts about how I envisioned the track in the mood board just so we’re on the same page!

You seem to be a huge fan of DAY6, how did you discover Seori and Keshi's music? Who else you enjoy listening to?

I saw an ad for Keshi’s 'Blue' on Instagram a few years ago, and I immediately checked out his music! It really left an impression on me when I heard it. As for Seori, I saw someone tweet about her and that Jae recommended her, and so I checked her tracks as well, and started to casually listen to her music!

Who are the musicians you'd love to collaborate with?

Ohh, that’s a tough one. I guess I would love to collaborate with some of the artists that I look up to like Nive, Keshi, Stephanie Poetri (absolutely adore her!) , or even NIKI! Their songs are really nice, and I usually put them on loop. Of course, if there would be a chance to collaborate with DAY6 though, then that would be such an honour.

Do you have any other projects coming out soon that you can share with us?

As of now, I still don’t have any upcoming projects. I’m currently just doing freelance work and personal projects while I’m studying, so there’s that. :)