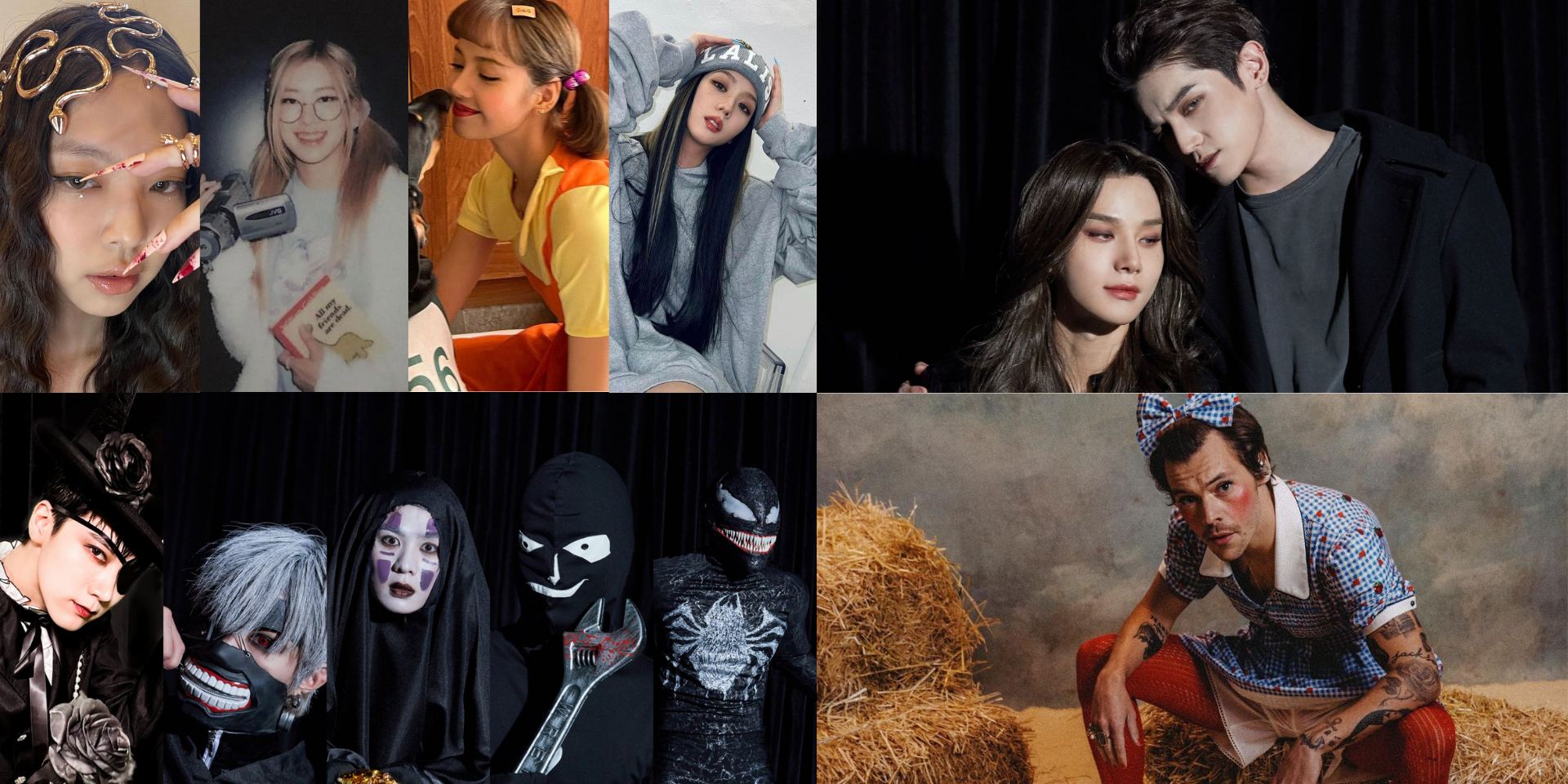 Halloween weekend is officially over, and what better way is there to close out the spooky season by looking at what the celebrities showed up as this year?

Social media was abuzz over the past few days with photos of celebrities in their various costumes. From creepy characters to hilarious outfits, these musicians sure did not disappoint. In fact, some put in so much effort you would think there was a prize given out for the best Halloween costume.

To make things easier for all of you who want to see how your favourite idols and artists celebrated Halloween, here's a list of some of the most iconic getups musicians have thought of this year. Be warned – some costumes are horrifyingly good. Move over, Kristen Stewart and Robert Pattinson – here's a pair with more chemistry than Bella and Edward had in the movies. K-pop act NCT's Taeyong and Jungwoo definitely turned heads by attending SM Entertainment's Halloween party as the iconic couple from Twilight. Dressed in all-black with a set of dark locks for Jungwoo and pale Cullen-approved makeup for Taeyong, these two are definitely amongst the top contenders for best celebrity Halloween costume this year. Over the years, fans have come to learn that Ariana Grande takes her Halloween costumes seriously. From the realistic, detailed makeup looks to the intensive photoshoots, her costumes always have fans stunned – and this year was no exception. The vocalist unveiled her look as the main character from 1954 horror animated film Creature From The Black Lagoon on her Instagram page, and let's just say people in the comments were definitely impressed. The girls of BLACKPINK have proven that they know how to produce addictive hits, smash music charts, and break records, but this past weekend has shown us that they also know how to take dress-up to the next level. Each member showed up as a different character this year – JENNIE was Medusa, ROSÉ was an awkward schoolgirl, and LISA was the doll from the popular Netflix series Squid Game. In our opinion, JISOO's costume won fair and square – the singer was dressed as her fellow group member LISA. Halloween costumes are always fun, but even better when you can coordinate them as a couple. Pop singers Shawn Mendes and Camila Cabello decided to show up in their best Día de los Muertos attire. Día de los Muertos, which translates to Day Of The Dead, is a Mexican holiday that celebrates both the living and the dead. With makeup to make themselves resemble skeletons, the pair were the best-looking ghostly couple we've seen this year. 'Traitor' act Olivia Rodrigo attended a Halloween party over the weekend in a look that only cemented her rising star status. Dressed as Elvira from the film Scarface, the singer showed up in an eye-catching blue silk dress and a blonde wig. In a post on her Instagram, she also shared a video of herself dancing in costume with close friend and singer Conan Gray, who was dressed as Rodrick from the Diary of a Wimpy Kid series. How the members of WayV managed to look good while playing the part of ghostly characters is a mystery to us all. Appearing at the SM Entertainment Halloween party, Hendery was Detective Conan Killer, Xiaojun was Venom, Ten was Ciel Phantomhive, YangYang was Keneki Ken, and Kun was Kaonashi. Whether or not the black costume coordination was planned or simply evidence of the members' chemistry, we'll never know. After seeing what Harry Styles wore on stage at his concert over the weekend, we're definitely feeling like we're not in Kansas anymore. The 'Watermelon Sugar' hitmaker had everyone talking with his Dorothy costume from The Wizard of Oz. Styles went all in, donning a large bowtie atop his head, a gingham dress, stockings, and red glitter shoes. A generous amount of blush on his cheeks finished the remarkable ensemble. K-pop quartet aespa were definitely a sight to behold on Halloween this year. Each member stood out in their own way, with breathtaking costumes that showcased their efforts. Karina was the Queen of Hearts, Winter was the doll from Squid Game, Giselle was Harley Quinn, and Ningning was Black Swan. Makeup and an assortment of wigs and props took the 'Savage' act's looks to the next level. This look was so lifelike we had trouble placing who was behind the costume. American singer Lizzo's costume as Baby Yoda was nothing short of impressive. The singer's body was painted blue from head to toe, with added details such as long yellow claws for nails and large pointy ears that looked like they were indeed growing out of her head. As if this costume wasn't impressive enough, she also had another look for Halloween – Kim Kardashian's outfit for this year's Met Gala and the doll from Squid Game. Fans of the popular 2006 K-drama Princess Hours would easily identify what look Red Velvet's Yeri was going for. The singer dressed up as main character Chae-kyung Shin, completing the look with the character's toy bear from the series. Despite being the only Red Velvet member who attended the SM Entertainment Halloween party, her outstanding costume definitely made up for the rest of the members' absence. Model Hailey Bieber served this Halloween with the number of outfits she had. The singer shared multiple looks this past weekend, with the first being the one and only Britney Spears. In a series of photos shared on her Instagram, Bieber dressed up as the 'Toxic' act from her iconic music videos, magazine covers, and red carpet events.

She later unveiled a second look – Princess Mia from the movie The Princess Diaries. Everyone knows by now that Rihanna is a queen at everything, and that includes coming up with the most unique Halloween costumes. The singer and entrepreneur decided to celebrate Halloween as Gunna this year, replicating the rapper's viral outfit that had made waves on the internet. Not only did everyone talk about her hilarious costume, Gunna even showed his approval for the costume by changing his Instagram profile picture to a photo of Rihanna's fit. Once a Disney star, always a Disney star. Joe Jonas decided to honour his Disney roots by dressing up as a character from the popular Disney series Lizzie McGuire. Jonas was the character Paolo, his wife Sophie Turner was Isabella, and actress Olivia De Jonge dressed up as Lizzie. The outfits were so incredible that Hilary Duff herself who played Lizzie McGuire couldn't help but leave a comment on Turner's Instagram post. While countless celebrities dressed up as the doll from Squid Game this year, nobody did it like Super Junior's Shindong. It's clear that the singer took his Halloween look seriously – he even had an entourage comprising masked men in red jumpsuits as well as a tree following him everywhere. In fact, this is not his first time in this costume – he had also previously shown up as the character in an episode of the variety show Men On A Mission. Katy Perry has never disappointed fans with her Halloween costumes. From dressing up as a Hot Cheeto to showing up as former United States Secretary of State Hilary Clinton, she's always turned heads with her eccentric ideas. Well, this year's costume takes the cake. The 'Firework' singer showed up for Halloween this year dressed as none other than the COVID-19 vaccine, while her husband Orlando Bloom dressed as a doctor.