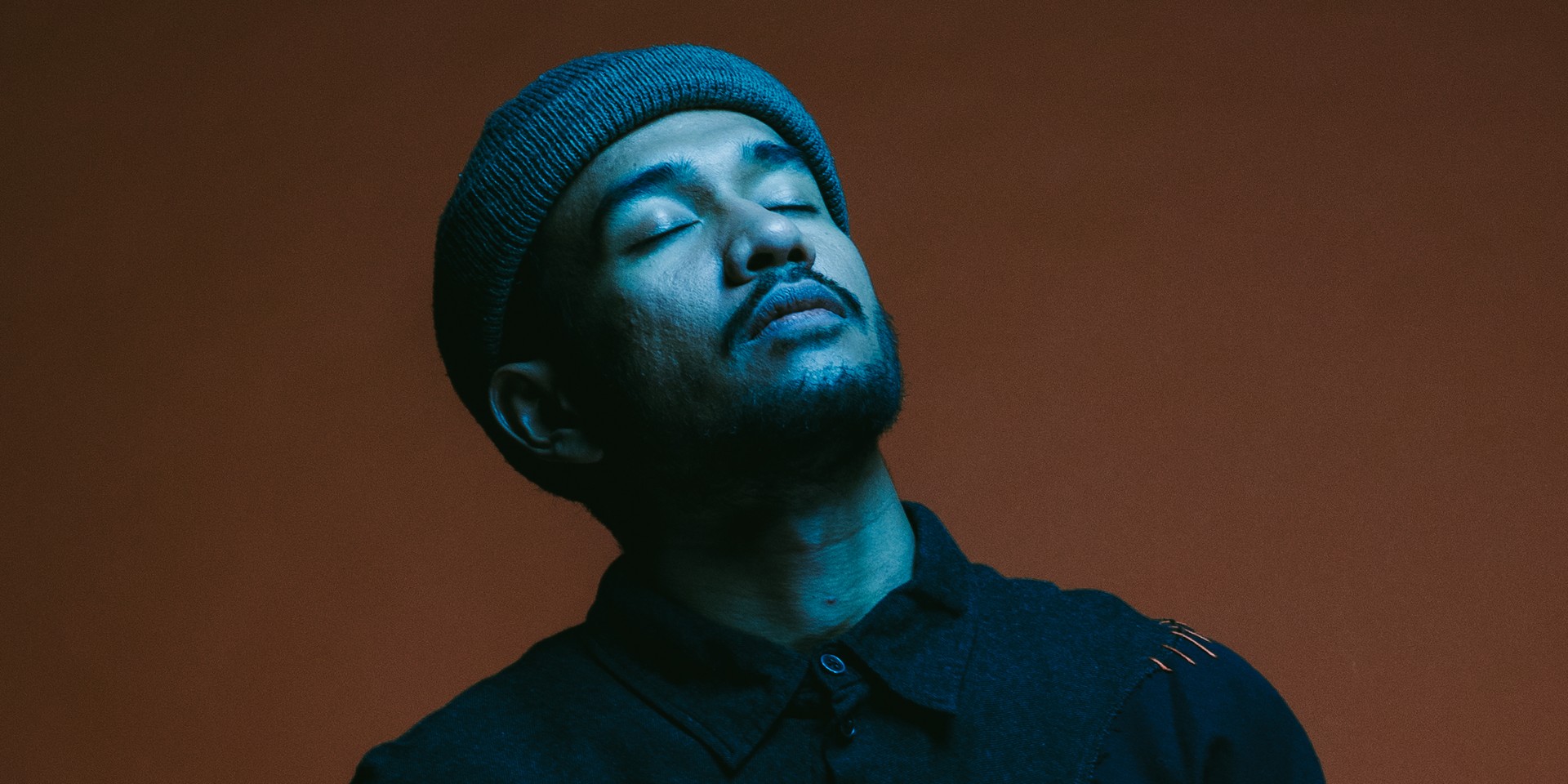 Teddy Adhitya still remembers the goosebumps he felt the first time he sang on stage.

Over a decade had passed since Adhitya's graduation day performance as the vocalist of his high school band, but the 29-year-old singer-songwriter did not regret any part of his journey. Having played the drums since the age of four, Adhitya followed in the footsteps of Indonesian veteran singer Andre Hehanussa, and started his singing career as a backup singer of Hehanussa's band. These years of experiences molded him into an artist worth watching in Indonesia's R&B scene ever since he won Best Newcomer at the AMI Awards in 2017.

"Raw storytelling - lyrics and music-wise. That defines my sound as an artist," Adhitya said.

Since his debut with 'In Your Wonderland' in 2016, Adhitya's many influences from Jazz, R&B, and Funk, shone brightly through his works, especially in debut album Nothing Is Real. With his desire to tell stories and vocalise his imaginations through his songwriting, Adhitya's latest album Question Mark ((?)) showcases an extensive sound palette while pondering over the unanswered questions in his life.

Bandwagon caught up with Adhitya on his musical beginnings, telling personal stories in his music, and how life during the pandemic has been.

Share with us about how the journey was like since you started teaching yourself everything from singing to music production.

I used to do renditions of some popular songs and uploaded them to YouTube and Soundcloud. Sometimes, I can't find an instrumental backing track that suited my liking, and that led me to dig deeper into music production. It not only solved my backing track problems, it actually made my renditions way more personal.

A post shared by #QuestionMarkQuestionMarkAlbum (@teddyadhitya) on Nov 20, 2019 at 2:48am PST

How does music help to tell the stories you've always had on your mind?

Personally, singing is my storytelling avenue, but somehow I felt like that it was not good enough because I also want people to hear my story the way I see and hear them. Being inherently curious and ambitious, I ventured into a music production crash course on my own. Through YouTube and a lot of my other musician friends, I gained basic knowledge on this matter. I’m also a huge fan of The Neptunes (Pharrell Williams and Chad Hugo), to me they’re on point for every facet of their production. Their music is not merely an ear pleaser - it made me feel what they want me to feel even in the absence of lyrics.

When I decided to work on my first album, I realized that I didn’t have the necessary knowledge and ability to be my own producer. Luckily enough, I crossed paths with Anugrah Swastadi, my co-producer on my debut album Nothing Is Real. It merely took a year for us to work on that album and I practically moved into the studio in the process of making this album. I used this opportunity to learn more about music production by becoming an intern at Anugrah’s music studio MABES MUSIC. I have to say that this experience contributed to a huge chunk of what I know about music production in general.

Share with us about your debut single ‘In Your Wonderland’ and what thoughts were in your mind at that time.

‘In Your Wonderland’ was the first song that I recorded as a soloist. It’s a story about love and imagination. A love story that only happens in the “wonderland”, it’s not even real. When you admire something or someone so much but you know very well that it is only a fantasy. So in all actuality, it’s NOT a happy song. Blatantness and honesty were the only things that were in my mind when I recorded the song.

Your most recent album Question Mark (( ? )) showcased a new side of you musically. Tell us about what inspired the album.

As human beings, we live with question marks every day. It is a perpetual thing from the moment you wake up, “What time is it now?”, “What's my plan today?” or more significant life-related questions like “What am I gonna do with my life?”, or “What is my purpose here on earth?”. I feel like as I get older, these questions get bigger and bigger. As I dive deeper into those questions in my head, musically and lyrically, my sound gets darker and richer at the same time.

What inspired me most is how was I going to find the answer to those questions of my life and maybe even help my audience answer those similar questions in their personal lives as well.

How did your personal style evolve in Question Mark (( ? )) as compared to your debut album Nothing Is Real?

I'd like to put it this way - if my albums were the ocean, Nothing Is Real is the surface, where beautiful reflections and waves collide, and the only color that you see is blue progressing from light to dark blue. Question Mark ((?)) , on the other hand, is when you take a little deeper dive. More colours and life forms are seen, but you might need to hold your breath a little bit longer to see them. Sound-wise, it’s richer than the surface, just like you see more colours as you go deeper into the ocean.

I was 27 when I worked on Question Mark ((?)) and I feel like my life is also evolving to be a little bit more complicated yet more fulfilling at the same time compared to my younger days.

Tell us about A Concert (( ? )) that just premiered last week.

It’s a birthday concert celebrating Question Mark ((?))’s Birthday. This concert marks a 1-year release of my 2nd album, an album I recorded in the woods in several different villas. I reckoned, what better way would it be to celebrate this journey than giving my fans and people around the world a live session. Not just a live session, but a session that would give viewers what they wanted to hear and more. A live session that brings its viewers on an epic excursion to the open serene nature. This (non)concert aims to give out hope, love, and passion in these trying and turbulent times as well as hand out the courage to get through this and to fight on. I guess that’s the best way to sum it up.

Having performed at Flavs Festival and Music Matters during the lockdown, what are some of your biggest takeaways from the livestream shows?

I'm just thankful that I can still do storytelling although not in a live setting. Because at the end of the day, amid this pandemic, still being able to have the opportunity to do what I love the most is something that I would never take for granted.

A post shared by #QuestionMarkQuestionMarkAlbum (@teddyadhitya) on Aug 17, 2020 at 9:48pm PDT

Being a travel and photography enthusiast, how have your hobbies changed as a result of Covid-19?

I became a big-time gamer. Haha! Although I’m still trying to find a way to facilitate my hobby as a travel and photography enthusiast, one of the ways to facilitate them is by making THIS IS NOT A CONCERT (( Question Mark )) in a camping ground in Bandung where I can still travel and do a little bit of photography to keep that passion alive.

The team of “THIS IS NOT A CONCERT (( Question Mark ))” divisi musik. Tanpa mereka, show nya ga akan kaya yang kalian tonton. Give some love to each one of em! ❤️

A post shared by #QuestionMarkQuestionMarkAlbum (@teddyadhitya) on Sep 19, 2020 at 2:58am PDT

The film documentary of my album is made because I feel like I need to share not just the end product but also the process of getting there, because I feel like the process is way more important than the result. I want to share that making an album is not always exclusively done in a studio, you could do it wherever you feel comfortable. and comfort plays an important role in delivering your message with full honesty and meaning.

Watch Teddy Adhitya's film documentary THIS IS NOT A CONCERT (( Question Mark)) of his second album Question Mark ((?)) here: