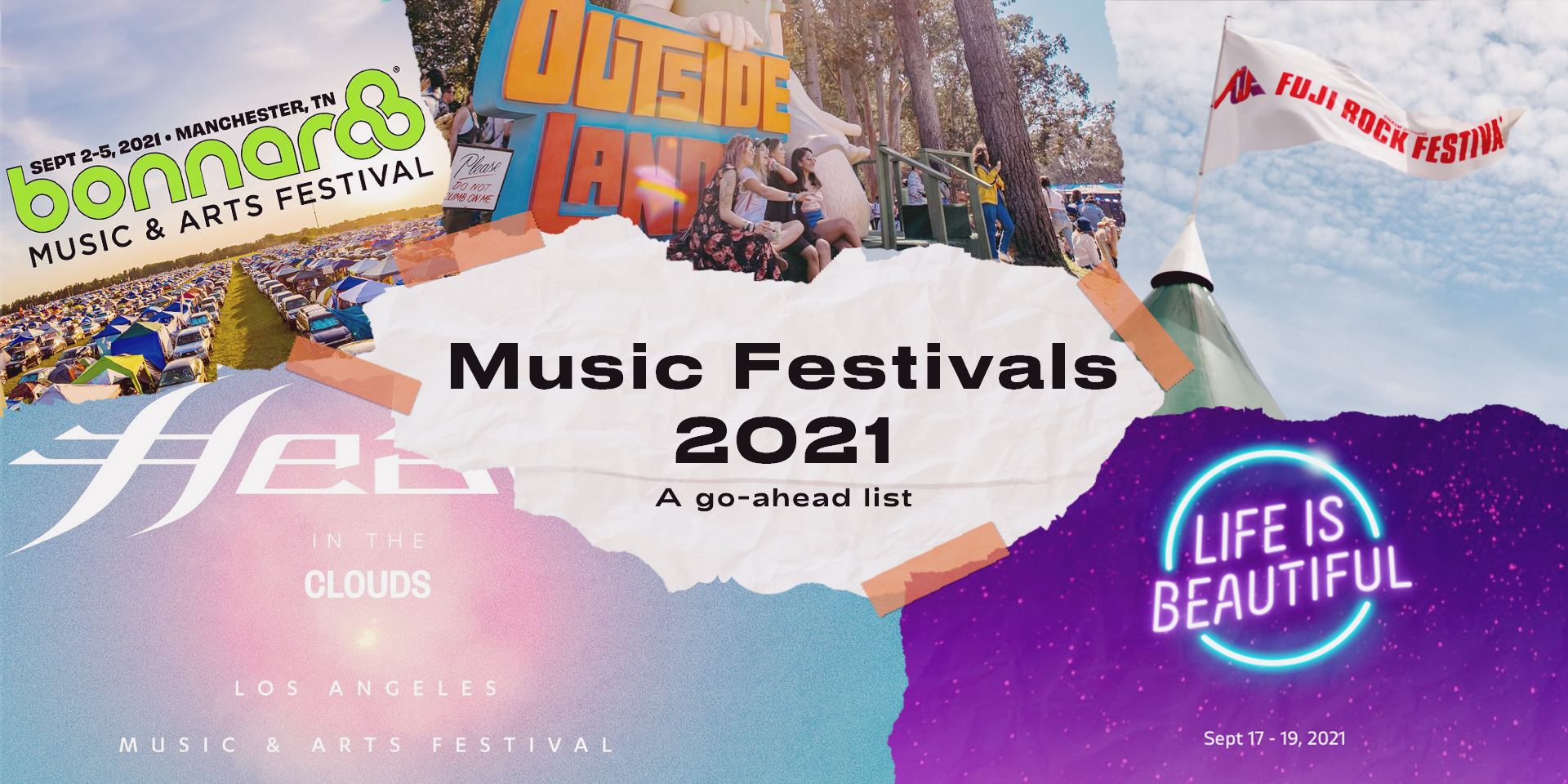 And they're back ladies and gents - but whisper it softly.

It comes as no surprise that we would've returned blazing, screaming and frolicking back on the lawns in merry delight eventually. That time has dawned for many cities, and whilst many others are still in the midst of battling rising and falling pandemic waves, it bodes well for the year that multiple live gigs and pilot events have touted progressive results, like these 13,000 attendees strong Liverpool get-togethers, or the Barcelona concert trials. Major sporting events like football's Euros 2020 and London's Wimbledon Open also serve as great omens for regional and international events.

All this just ushers forward a new era of pre-event testing and responsible partying on the horizon - and boy are we here for it. Below we take a gander at some of the major festivals given the green light for 2021, and if you're close-by to one, you lucky camper you, and if not let's hope everyone can pivot as masterfully as Glastonbury has for its punters and stream processions globally otherwise.

Line-up: Bombay Bicycle Club, Bastille, Wolf Alice, Kaiser Chiefs, Hot Chip, Beabadoobee, that Rick Astley, and Declan McKenna will sport the BBC partnered stages of Latitude in Suffolk, England for the multi-disciplinary event. Live podcasting, comedy sessions, and dance parades round off a wonderfully curated and historically rich reunion that hasn't seen it miss a beat since 2006, except for yesteryear's inevitability. 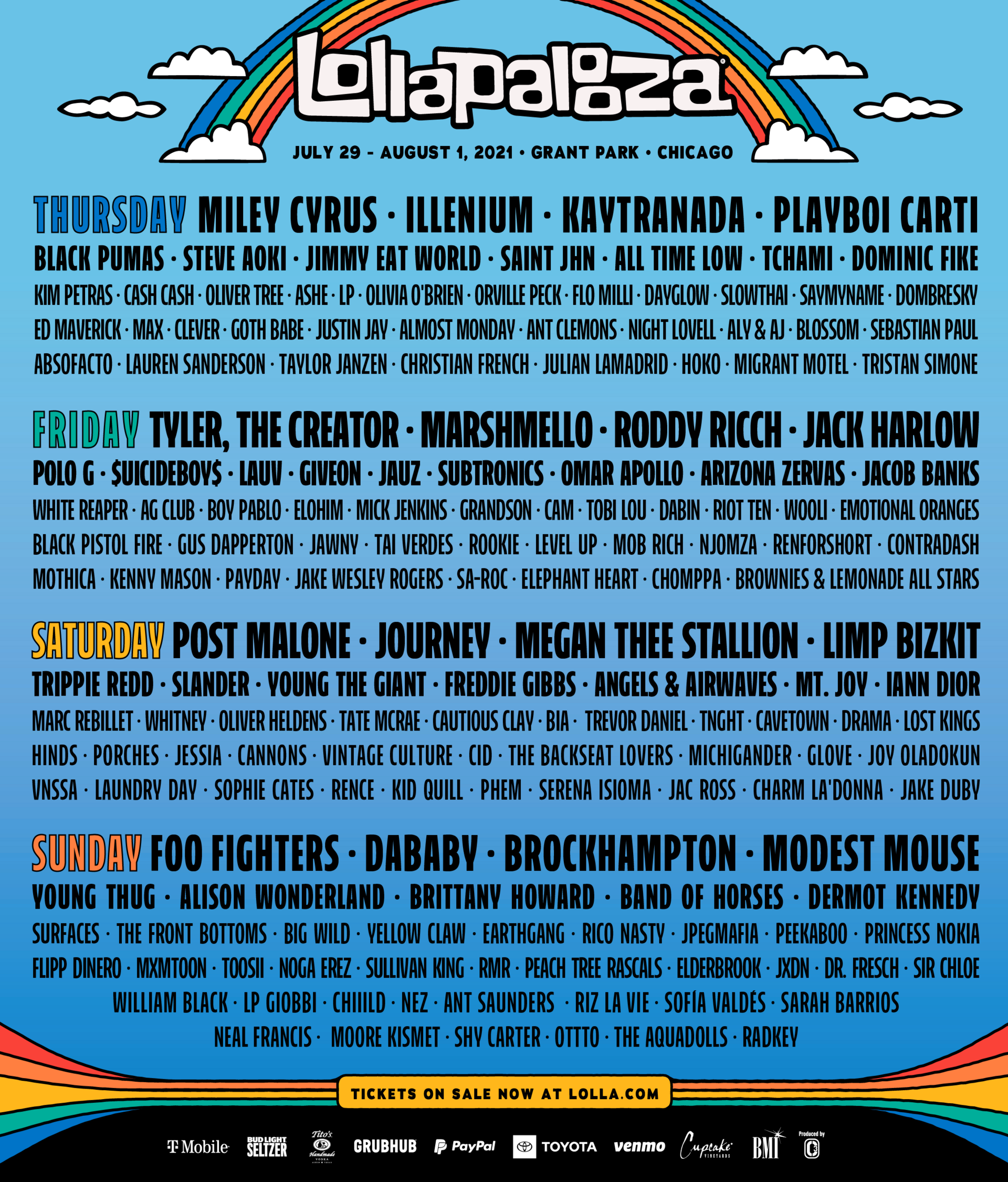 Line-up: California will see the likes of Kaytranada, Future, RL Grime, Malaa, Maya Jane Coles, Dillon Francis, Manila Killa, Noizu, and many others along the spectrum of EDM, dubstep, garage, rap, and electronica at the NOS Events Centre for what is two packed days spanning the crevices of dance music. 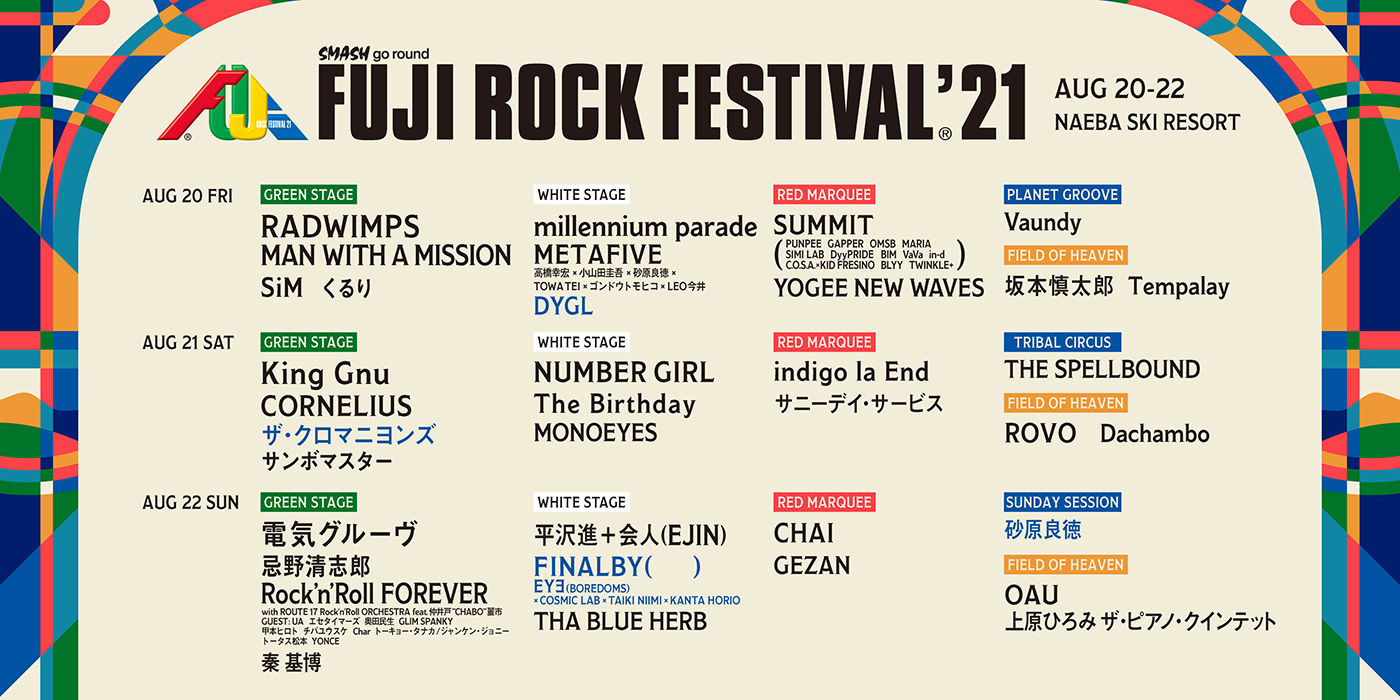 Line-up: Sporting an all-local line-up policy for this year's rendition, the mainstay calendar event returns with a hefty roster led by the beloved RADWIMPS, taking place at its forever-home at Naeba Ski Resort. King Gnu, CHAI, millennium parade, Man With A Mission, Cornelius, and indigo la End also form the bulk amongst many other local heroes, an opportune climate for accelerating home talents.

When: 20 - 22 August
Where: Biddinghuizen, The Netherlands
Tickets: Sold out - join the waitlist here.

Line-up: A multi-genre alternative festival that proceeded its older iteration of a similar name, Lowlands boasts an intimate setting and brands itself as showcasing the best of Holland, with its street theatre, arts, and literature minds in attendance as well. Liam Gallagher, slowthai, YUNGBLUD, AURORA, Amelie Lens, Denzel Curry, Octo Octa, and Ezra Collective form some of its sprawling 3-day line-ups, staying true to its huge blend of diverse acts. 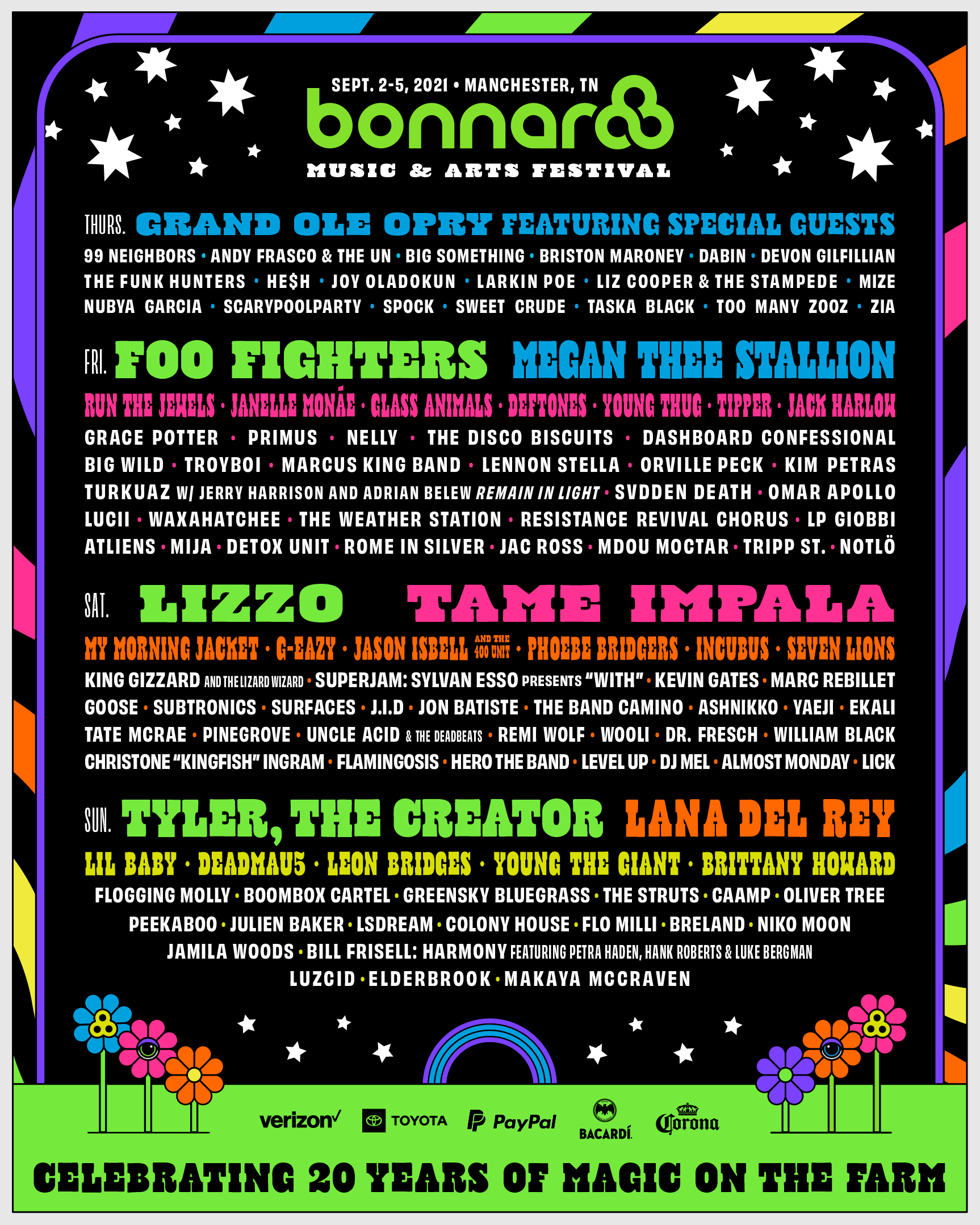 END OF THE ROAD

A post shared by End Of The Road (@endoftheroad)

Line-up: The UK festival is bullish on several themes: Music, comedy, literature, films, workshops, and healing, and has brought on a seismic line-up to parade its colours. From Little Simz, Whitney, King Krule, Arlo Parks and Current Joys, to Kikagaku Moyo, Les Amazones D'Afrique, Hen Ogledd, and Ahmed Fakroun, the brains behind the spectacle have combed corners of the globe to deliver an intense blend of culture and disciplines.

A post shared by Made In America Festival (@miafest)

When: 4 -5 September
Where: Philadelphia, US
Tickets: From US$150, via Made In America. 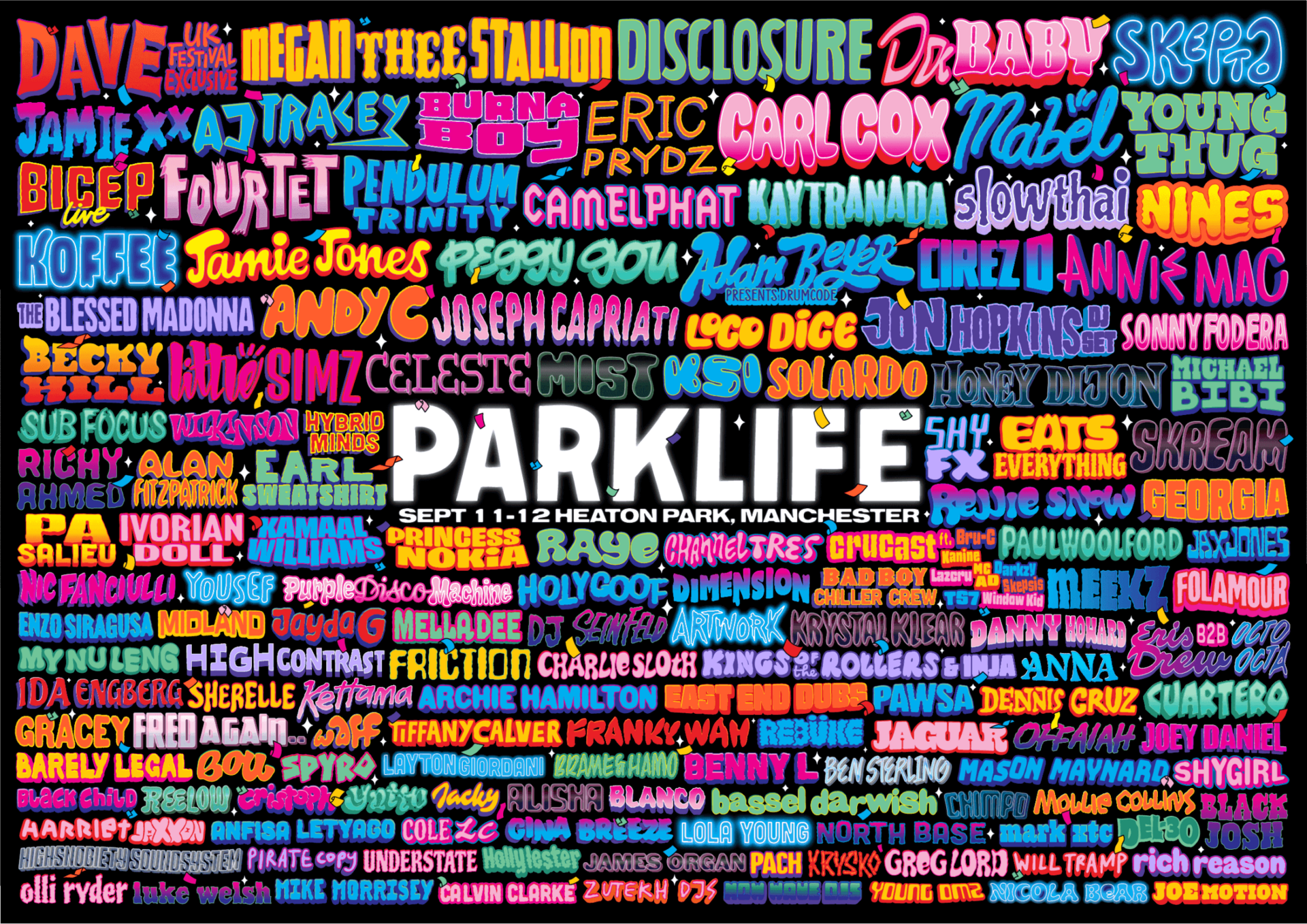 Line-up: With many an anticipated clash or two on the horizon, Parklife shoehorns 100 artists into a two-day weekend in cultural hub Manchester, a huge testament to the organisers, yet it's inevitable that many will be ping-ponged from stage to stage missing opening and closing numbers from their beloved acts. Shows from Bicep, Camelphat, slowthai, Four Tet, Skepta, Disclosure, Jamie xx, DJ Seinfeld, Cirez D, Adam Beyer, Channel Tres, Kamaal Williams, and plenty more spell a weekend full of UK garage, grime, dance, and R&B over 8 stages - good luck with your set times planning.

Line-up: After canning its first two Extrema Outdoor events, which were slated to take place on multiple dates before authorities altered restrictions, Extrema Extra is the organiser's answer to a continent that's ready to rave. Ben Böhmer, Mind Against, Joris Voorn, Dixon, Âme, Mathame, Maceo Plex, Tinlicker, and Recondite are part of a wondrous list of electronic and dance skippers, all with new material to boast.

Line-up: A mainstay in the Australian circuit, its 32nd edition takes place in postponed October instead of in the Autumn, April, as its country battles sporadic resurgences of infections. To compensate, the minds behind have shoehorned heaps of Australian notables like Tash Sultana, Paul Kelly, Jimmy Barnes, and Midnight Oil as headliners. They're joined by The Cat Empire, Hiatus Kaiyote, Ocean Alley, Briggs, Ziggy Alberts, and many more - legends. 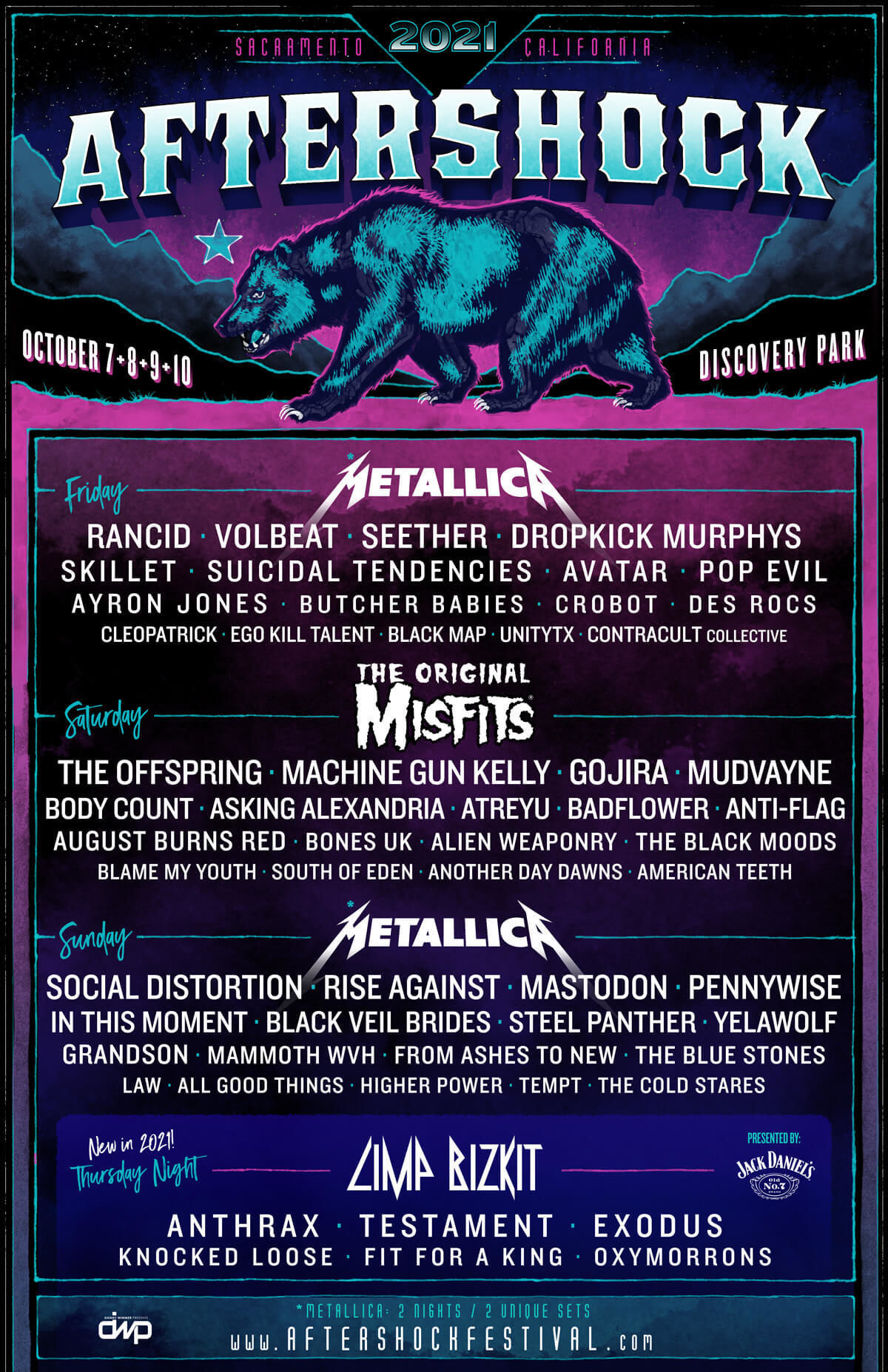 Line-up: Metallica, Limp Bizkit, Asking Alexandria, Misfits, Gojira, Machine Gun Kelly, Rise Against, and truckload more rockers headline a feisty 4-day showdown at Discovery Park for what's promised to be a roaring good time of head-banging and metal screaming. Legendary bands aside, the annual festival heads into its 9th edition with packages being snapped up quicker than years prior, a sign of its frothing audience. 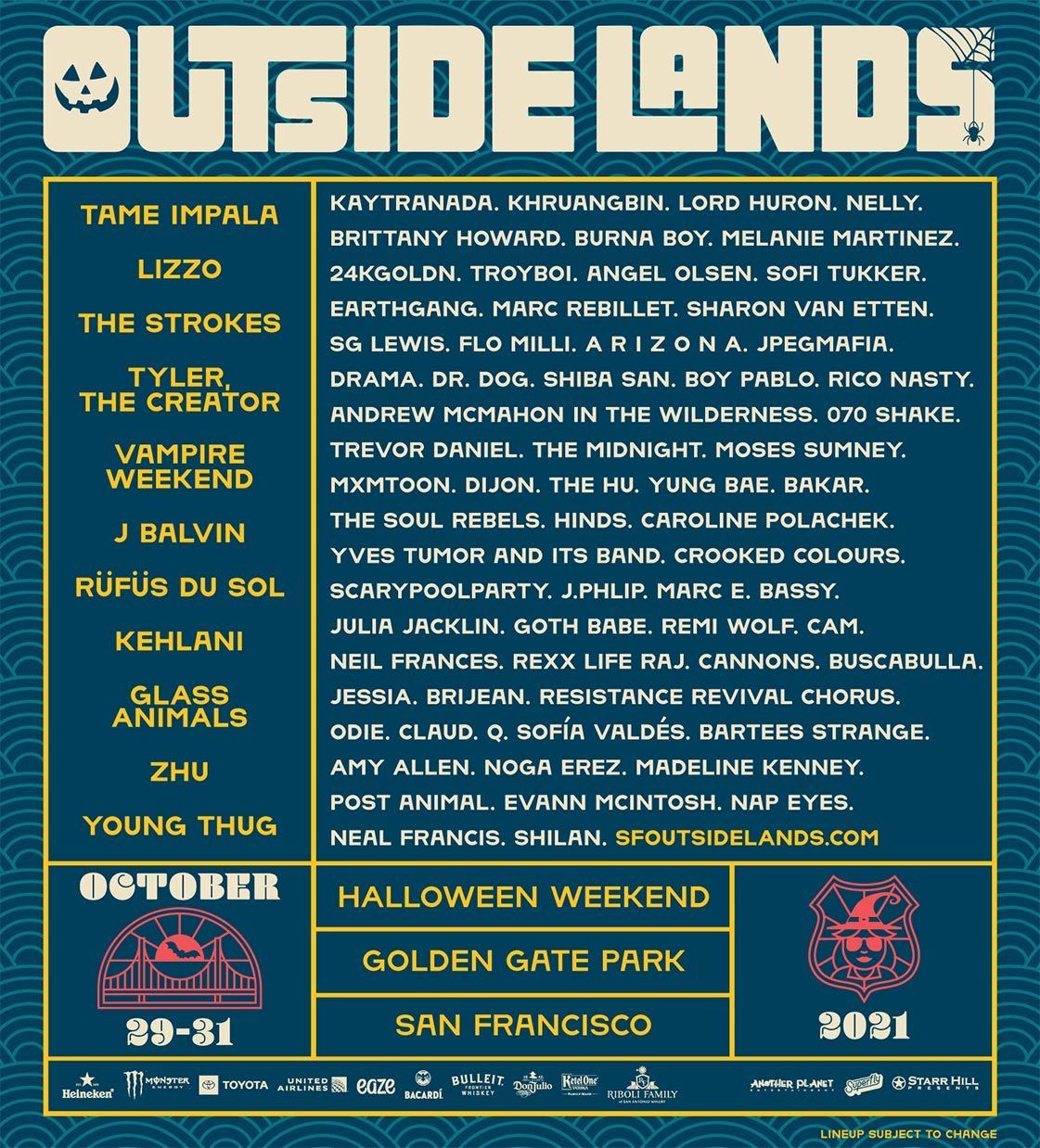 Line-up: The decorated Music & Arts multi-day (but none-camping) bonanza since 2008, which was shelved last year, returns to flaunt the Bay Area for Halloween - and who were you kidding if you thought its line-up might be questionable on the comeback. Besides a few salivating headliners like Lizzo, The Strokes, Tame Impala, Rüfüs Du Sol, or Tyler, The Creator, other highlights include Julia Jacklin, Khruangbin, Sharon van Etten, Moses Sumney, The Midnight, JPEGMAFIA, Neil Francis, and Andrew McMahon. Spookily stacked.

🌦 HEAD IN THE CLOUDS MUSIC & ARTS FESTIVAL 🌦
November 6+7 at Brookside at the Rose Bowl
Sign up for your only chance at the lowest price early bird passes, presale begins Fridayhttps://t.co/Z4TtUohGyN #88RISING #HeadInTheClouds #hitc3 #HITCfest pic.twitter.com/bYYhYQQQD3

Line-up: Unreleased. Debuting in 2018, previous editions of the Pan-Asian, 88rising branded festival included the likes of Rich Brian, Joji, GOT7's Jackson Wang, Higher Brothers, iKON, Anderson. Paak, and more. Head in the Clouds Jakarta was also meant to take place last year with the label's best and brightest, before restrictions ultimately got the better; one to watch.

Line-up: Unreleased, but previous years' line-ups - we're talking 2018 and prior - included Halsey, Khalid, The Vaccines, HONNE, Aurora, Metronomy, BEN&BEN, Glass Animals, The Kooks, King Gizzard & The Lizard Wizard, LEO王, and many other punchers both regionally and globally. 2021 is promised to be its biggest iteration yet following the past two cancellations, with the group citing political tensions for 2019's no-go and safety concerns for 2020.

Line-up: Boxing Day onwards sports a full Australian line-up for Wildlands; The Veronicas, What So Not, Cosmo's Midnight, Safia, Golden Features, Willaris. K and Lastlings form a local-heavy festival at the Brisbane Showgrounds, a venue famed for larger-than-life spectacles of sport and culture. Presented by the minds behind the Beyond The Valley festival team, Untitled Group, and Origin Fields, expect greatness. Tickets here.

Line-up: Vietnam is known for its unyielding way of life, so utmost relaxation and celebration are underscored by Epizode Asia's fifth installation that ushers in the New Year's. Sunset Sanato Beach will backdrop sets from established beat slingers Agents of Time, Deborah De Luca, Fideles, Jamie Jones, Nastia, Sunju Hargun, and Anna Nova amongst many more, with the third wave of acts still to be announced.

Line-up: Unreleased. With only a solitary date and a picture of its usual home grounds on its website to go by, gatherers of the art, music, and positive change festival are eagerly awaiting so much as a peep to cement those tickets. The multi-faceted event is known for its pillars; Music, Arts, Family, Farm to Feasts, Talks & Workshops, Wellness & Adventures, and takes place alongside a plantation with a hectare or so dedicated to what is one of Thailand's more downscale but inclusive parties. Past line-ups included legendary stalwarts like Jon Hopkins, Four Tet, Floating Points, Richie Hawtin, De La Soul, Rudimental, Seth Troxler, amongst others.