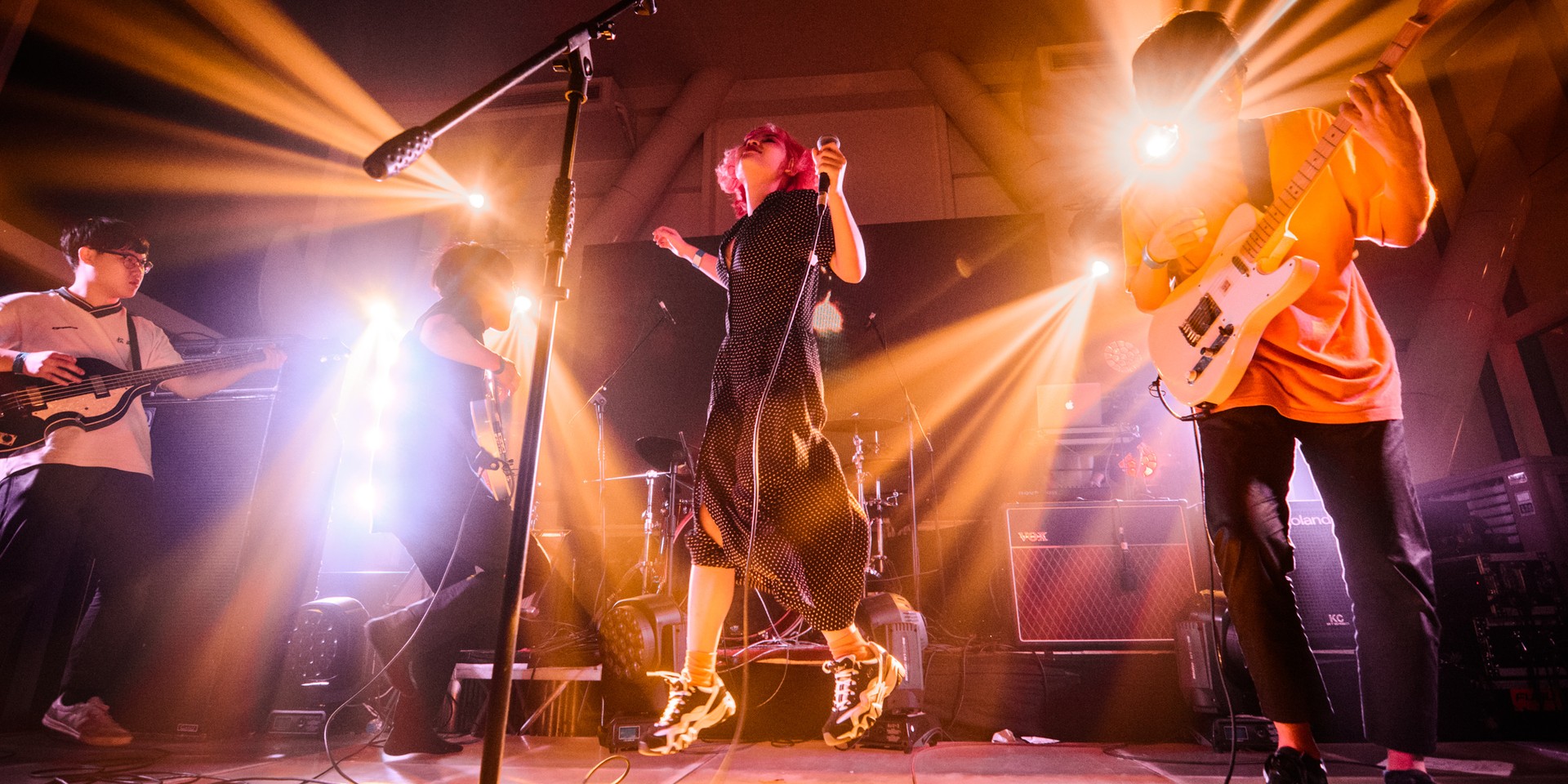 Dream pop trio Sobs stole everyone's hearts as they stepped onstage for Day One of All of the Noise 2018. It was the Singaporean band's second visit to Manila after their Philippine debut in March earlier this year. The trio was definitely a crowd favorite - aside from the screams and singalongs for their much-awaited performance, the band's merch also sold out on Day One of the festival. 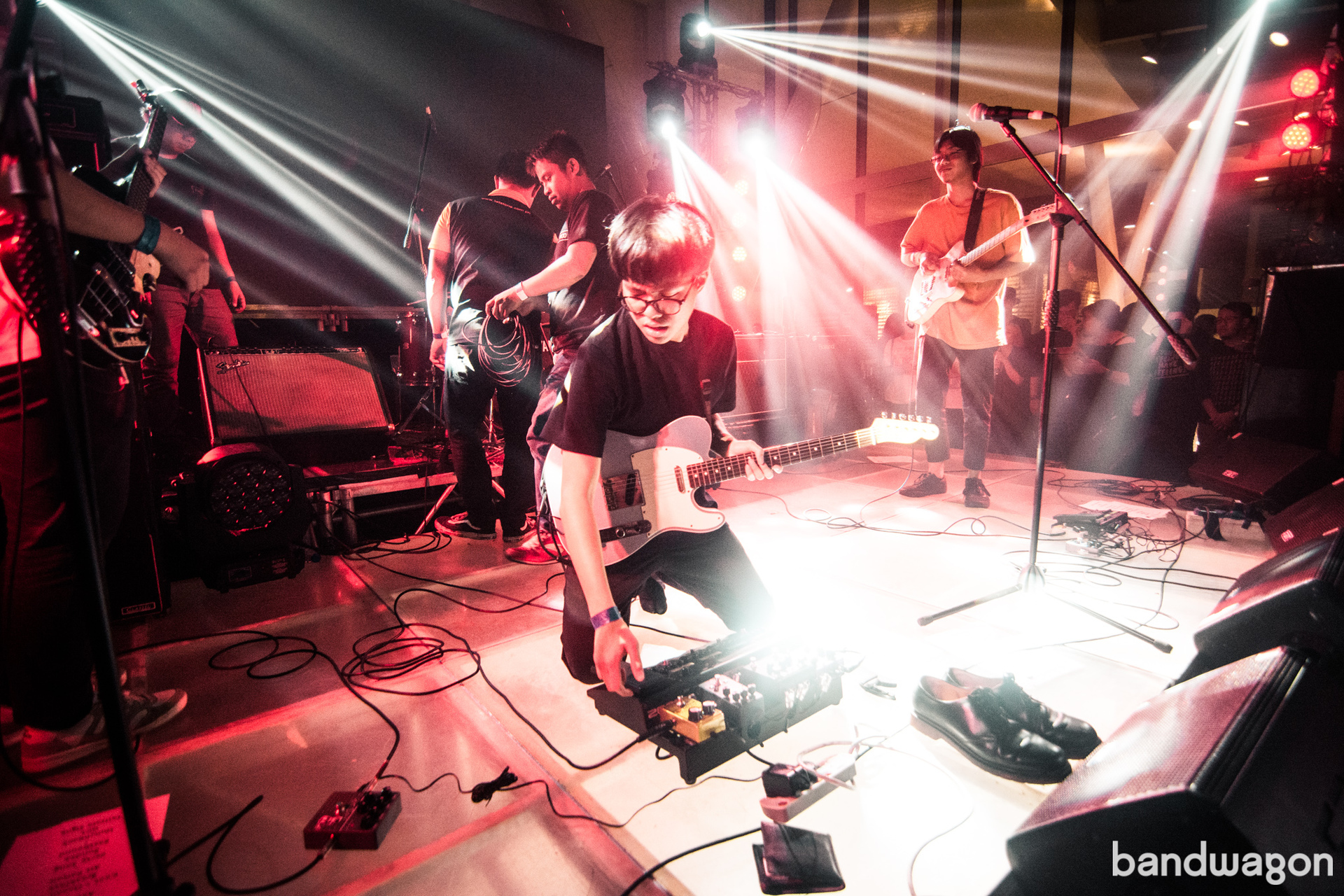 Bandwagon sat down with Sob's Celine Autumn, Raphael Ong, and Jared Lim to talk about their latest album, Telltale Signs, working with Filipino illustrator Mich Cervantes, and their favorite bands from the Philippines.

How was making Telltale Signs different from making your EP, Catflap?

Raphael: For the EP, we used a lot of samples. The first EP was done all on computers. It was a very simple kind of set up. People think it’s clinical, but there’s kinda like a lo-fi [ewan] to it. For the album, we brought session musicians. Like a drummer, Shaun Khiu. We recorded in a studio. But everything else, we recorded in our bedrooms. By this time, we had real amps hidden in my cupboard. [Got] neighbors complaining. I guess the sound now is a bit more saturated, a bit heavier too.

Celine: Like the vocals, I shout more now in the album, than in the EP. In the EP, I guess I sounded more like I was pulling back. I was still figuring out my sound back then.

Jared & Raphael: It was very different recording with a full band. [There are a lot more people in the room.] Yeah, like sometimes we would have all our label mates [from Middle Class Cigars] there to listen to the mixes and see if it’s good. Some of them also help out in some guitar parts, some keyboard parts. We were inspired by some of them as well. In the song ‘Breakfast’, in the synth part and chorus, we ripped [that] off from Cosmic Child.

Raphael: It was great working with others. This time we also had Paul Gold, an engineer from the US who worked on a ton of records that we really liked - such as Japanese Breakfast, Mitski, Yo La Tengo. It was really cool. 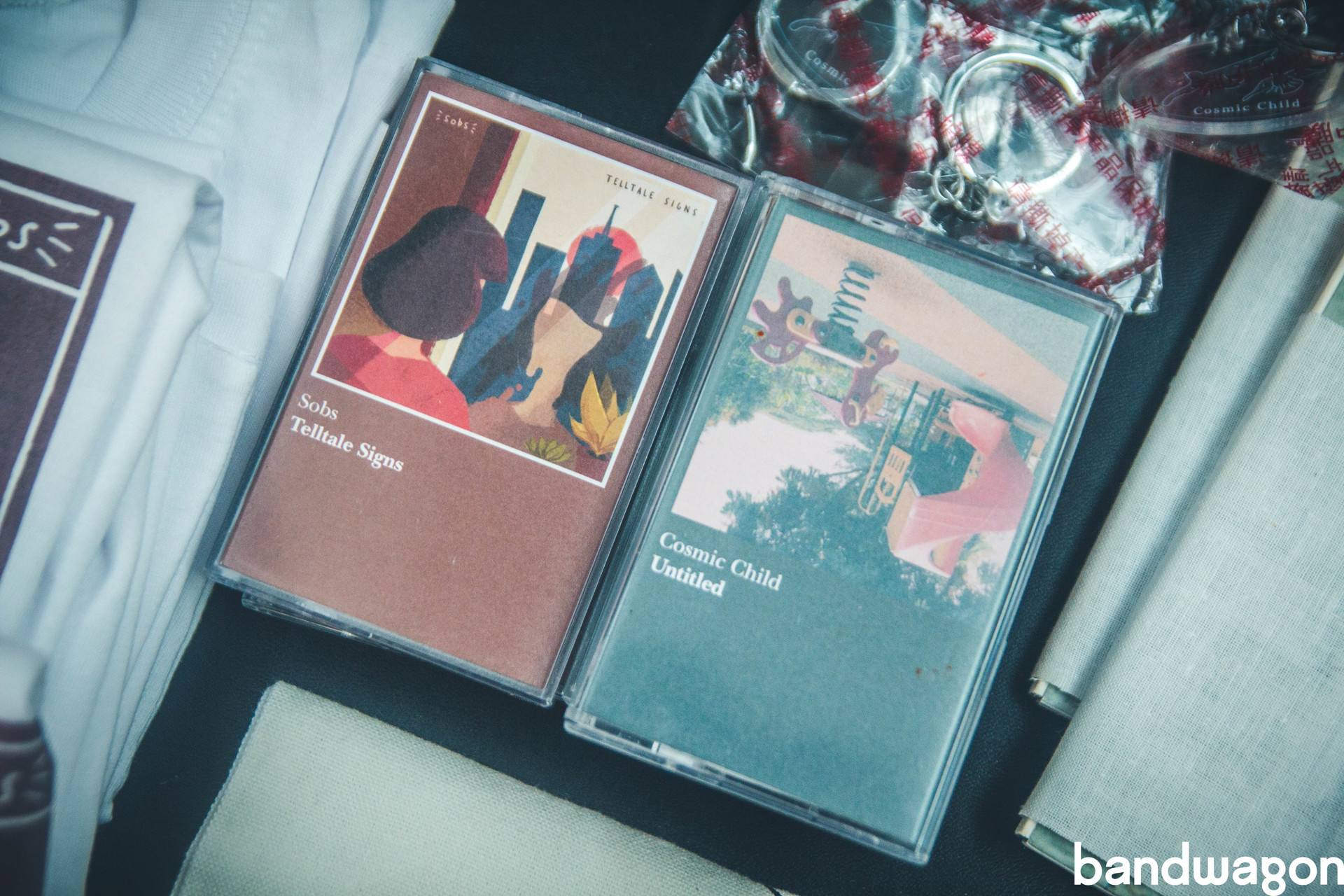 You worked with Filipino illustrator Mich Cervantes for your album cover. How did that collaboration come about?

Raphael: The first time we came to Manila, we were invited by Almost Crimes. They threw us a house party and we had a really good time, met a lot of new people. The house party was great, the lineup was Hey, It’s Your Birthday from Cebu, Breakfast Clouds, PCastless, Bedspacer, [which is] Mich’s music project. So we got to know her, we got to talk to her. She showed us her work and it started from there, I guess.

We were thinking of who would be a good fit and would be great to work with. Since she knows our material, she likes our music. It was a great experience working with her. She’s gone on to work on the auxiliary artwork like the cd inlays, some of our posters. I’ve even trusted her with my personal projects. And we’re a fan of her music as well.

Celine: Yeah and she wants to collaborate on the next album or something. So she would send us a demo sometime next year.

Celine: Yeah, that would be quite cool. If she could sing on a track or something.

You guys watched some of the acts last night. Did anyone stand out in particular?

Raphael: We were really impressed by tide/edit. They’re really tight. They actually came to Singapore awhile ago! They had a show with Sound Architects. I wish we could’ve gone, but we had a show on the same day. But it was nice to finally see tide/edit last night! We also saw BuwanBuwan Collective with Zeon [Gomez], a friend of ours from Zoom Lens.

Jared: We’re also looking forward to seeing Mellow Fellow. We played with him during our first time here. And that was apparently his first show.

Raphael: I really wanted to catch Tom’s Story and Irrevocable. We actually played a show with Irrevocable in Singapore. I really, really like Tom’s Story. I bought their album. We love the Philippines so much. We would be down to collaborate with anyone really. And being here is just really inspiring. That ‘Cool’ cover that we did yesterday, that guitar part was inspired by Megumi Acorda. I’ve been listening to Unexpectedly so much. 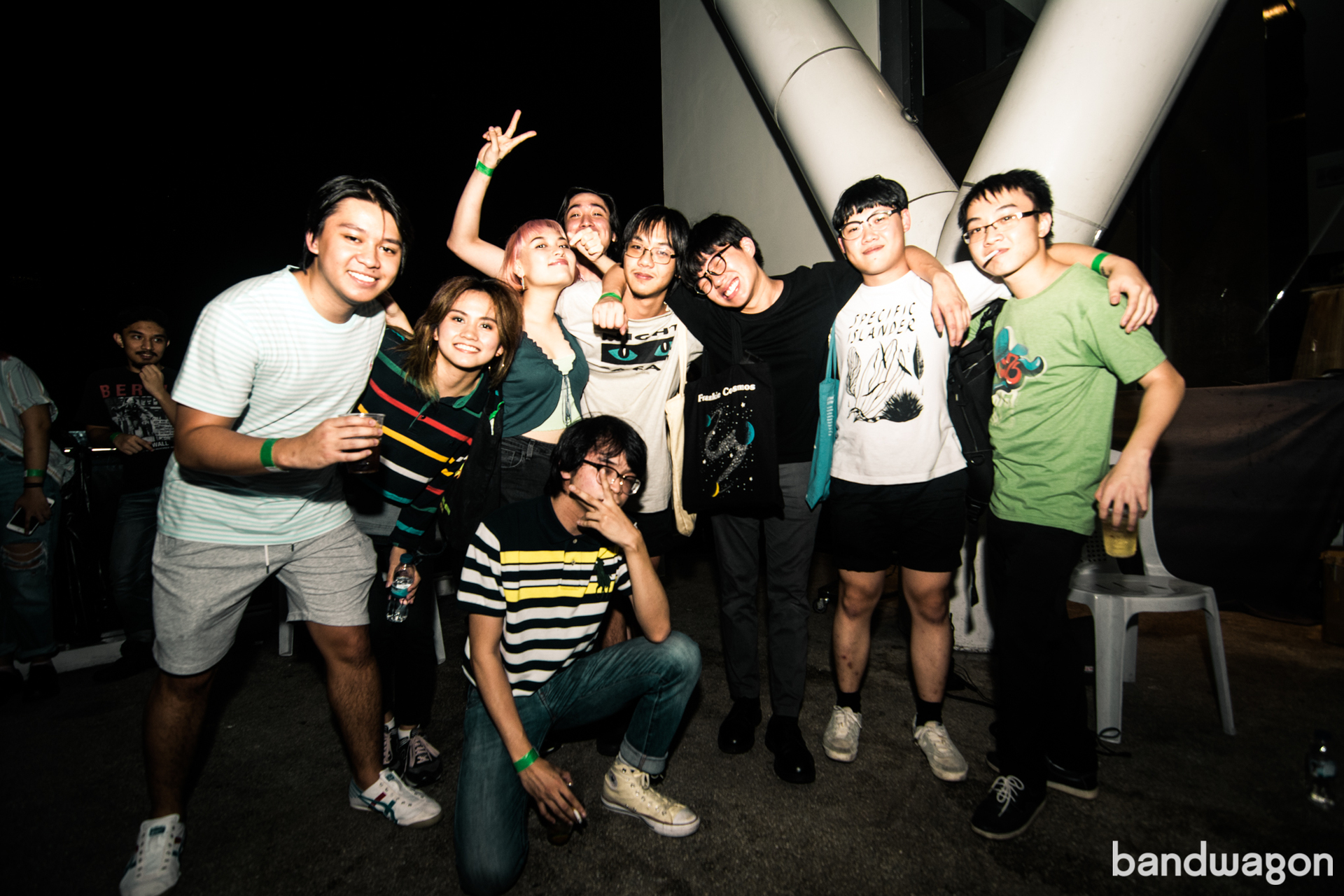 Sobs and Cosmic Child hanging out backstage with Manila's own Mellow Fellow.

Raphael: We’re big fans of The Buildings, Ourselves the Elves, Memory Drawers, Brain Twins. We are so inspired by the people here. It would be cool to work with Mellow Fellow too. We actually wanted to [for the last album]. We wanted him to sing on a track, but he was also busy writing his own album. Which we can’t wait for. Celine actually sang with Mellow Fellow in LA.

Celine: Cause we were both there [in LA] earlier this year. So I sang the chorus part of the song. It was fun.

What’s your next project?

Raphael: We’re working on it, but right now we are so busy with gigs, work, life, school. We’ve started to write stuff. So we hope to release an EP maybe [in] the first quarter of 2019. We’re working on a music video for ‘Astronomy’, before our Japanese tour. In the meantime, we’re having a lot of fun eating in Manila. I can’t wait to get to the supermarket and get some corned beef.

Jared: Oh yeah, we bought a ball of cheese.

Raphael: YES! It’s just this ball of cheese. It’s with our bassist, [the one] from Cosmic Child. It’s in Singapore already. 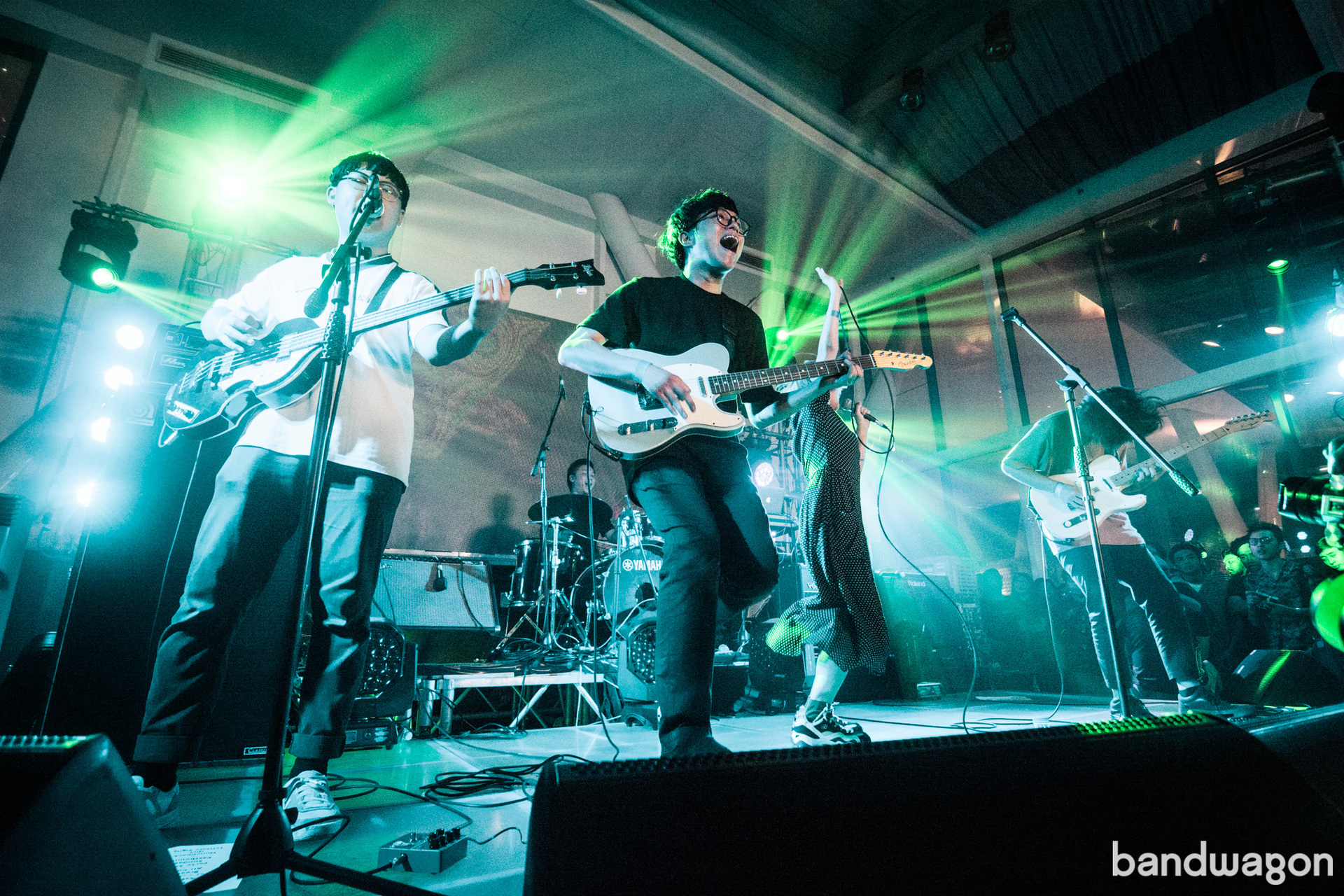 You’ve toured quite a bit over the past year. Is there anywhere else you would like to play?

Raphael: We wish we could play overseas more. But geographically, it’s a bit difficult. We’d have to fly out and take time off work, school. Like our session musicians. There’s a lot of people involved. We’d love to be one of those bands that tour non-stop. Like Snail Mail. We just opened for them in Singapore. They’ve been touring for one and a half years now. For some reason, I don’t know why, but most of the people who listen to us come from the US. People keep asking us to play there, but it’s really difficult because it’s a lot of money and visa issues.

What are your top cities on Spotify?

Raphael & Celine: Singapore, then LA, Manila, Jakarta, Houston, Chicago. We wish we could play in the US. It’s our dream. 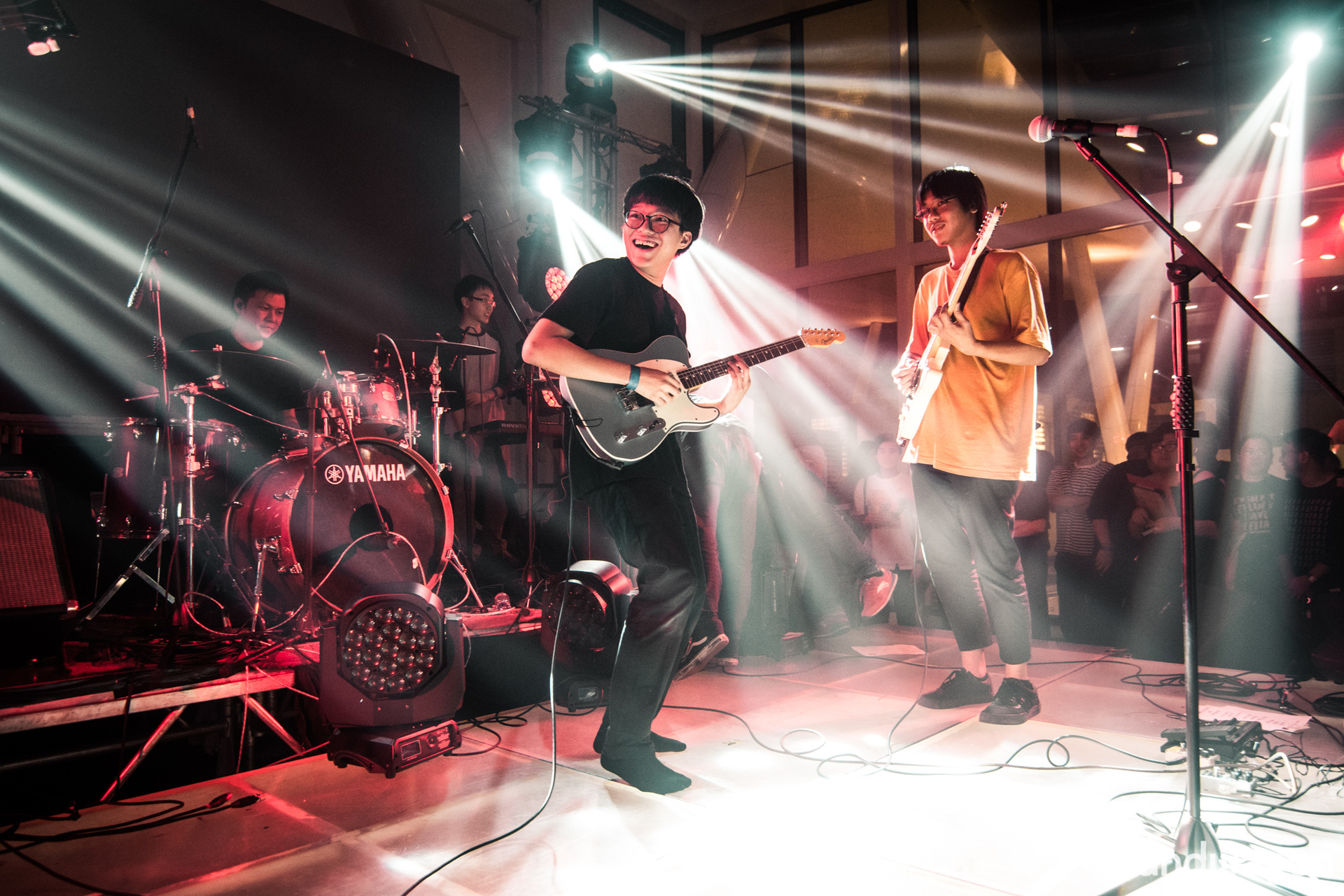 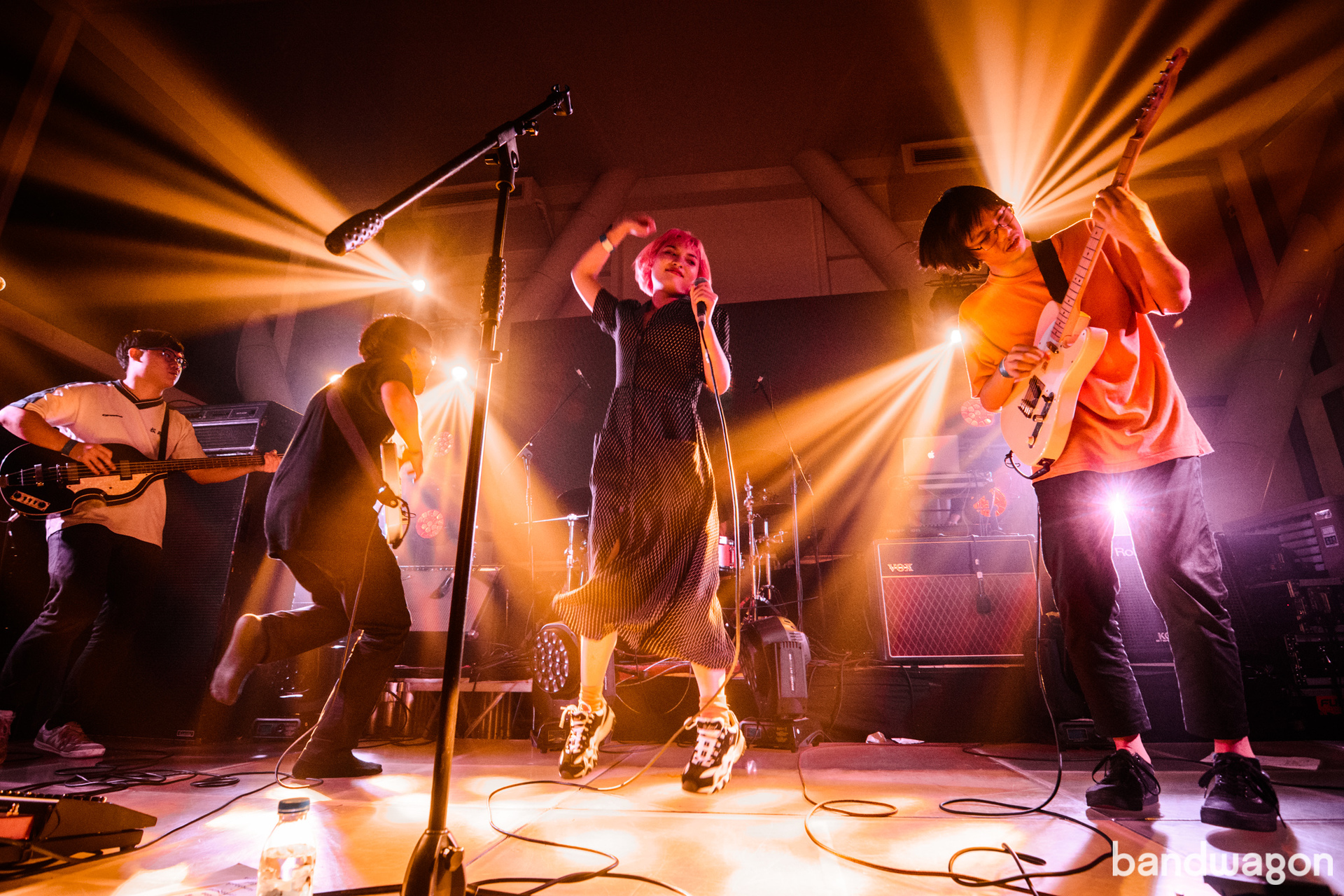 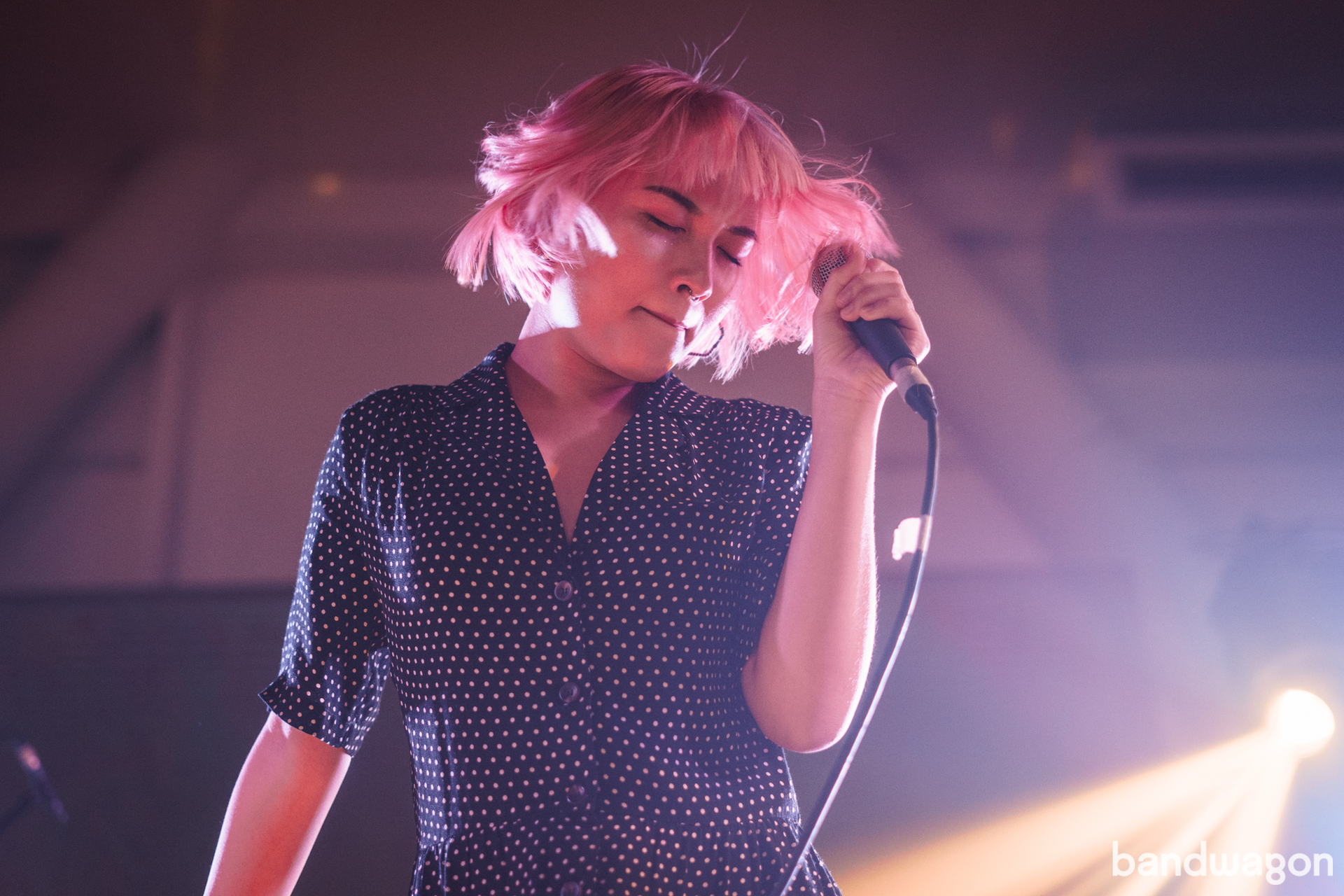 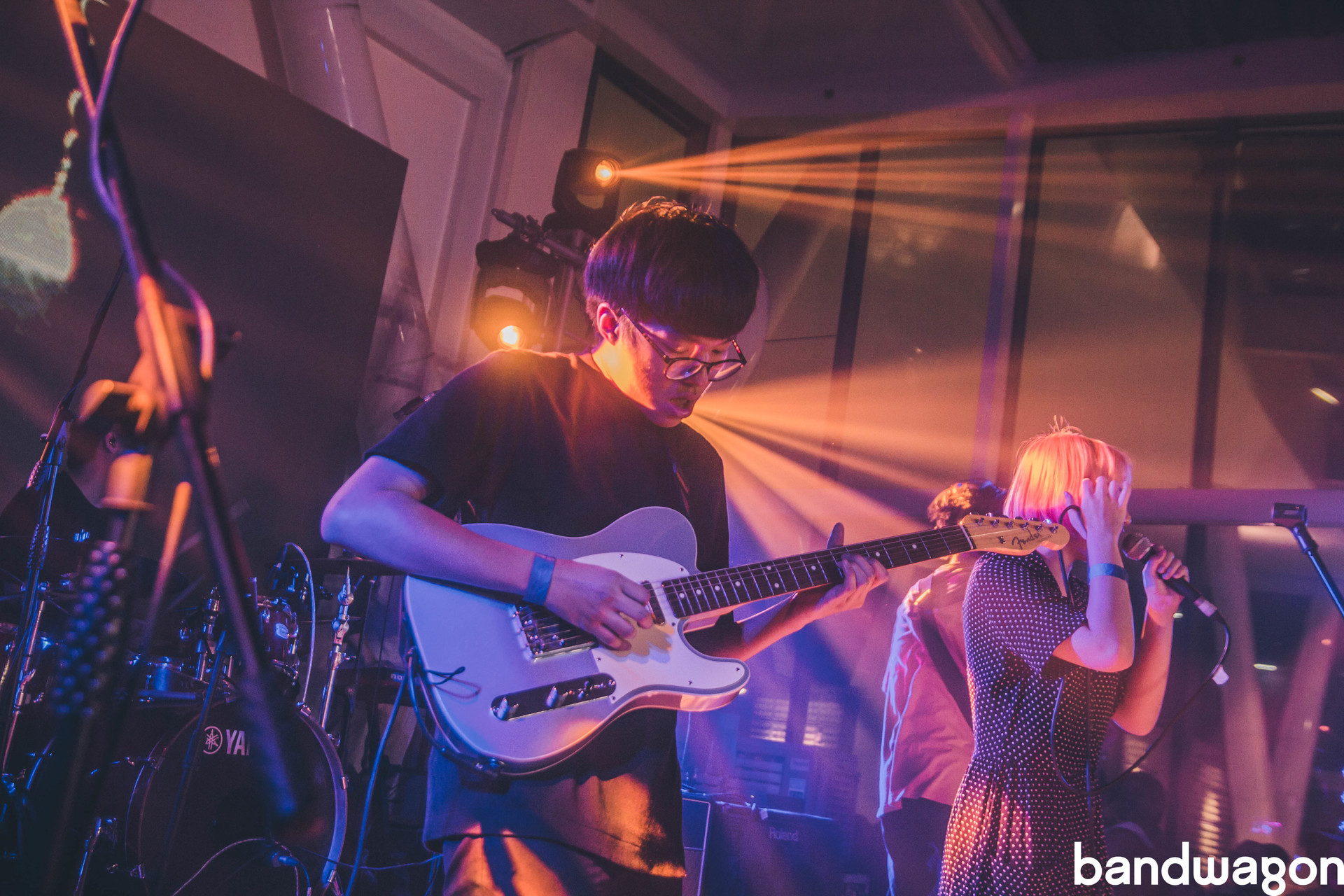 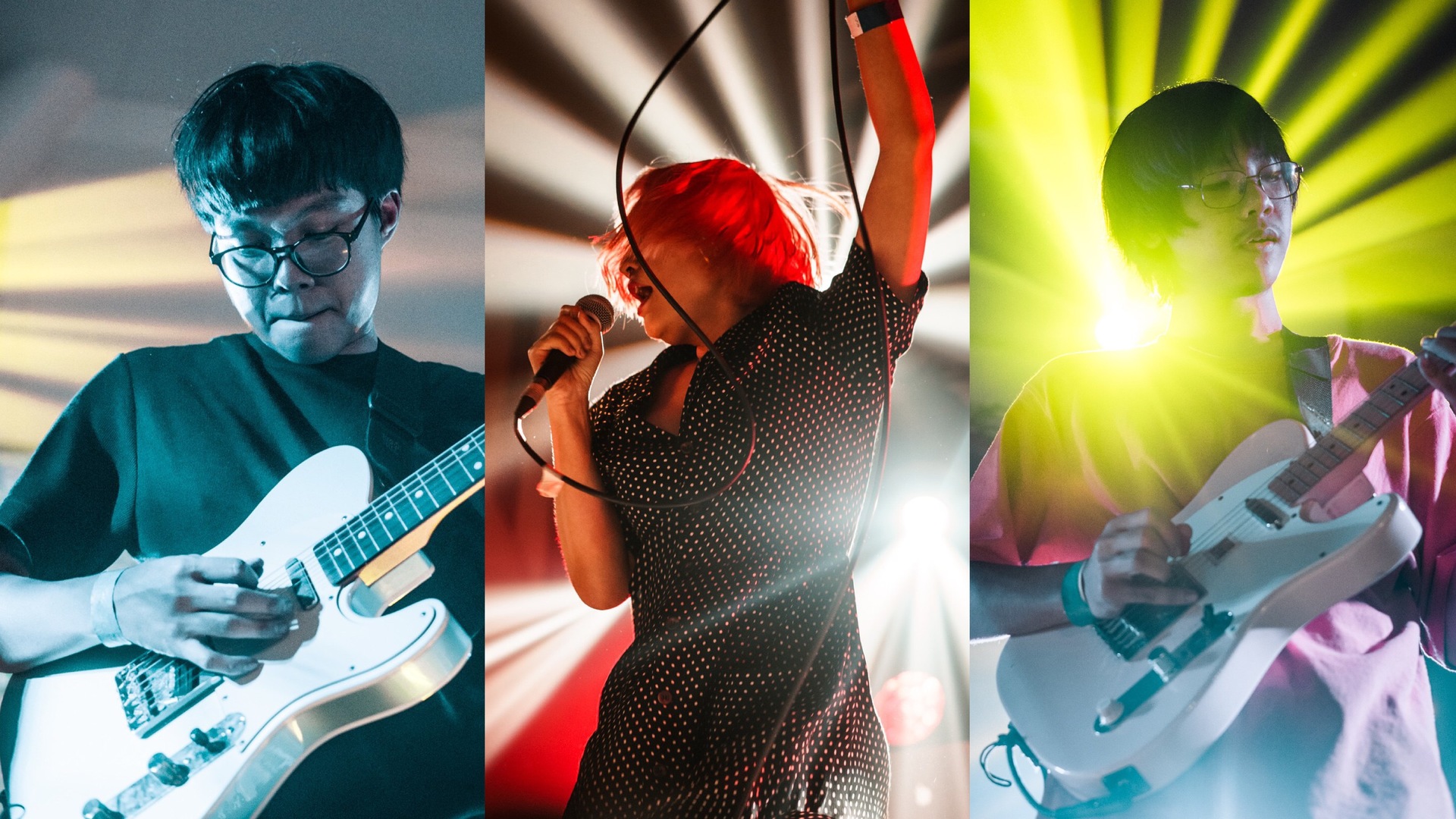 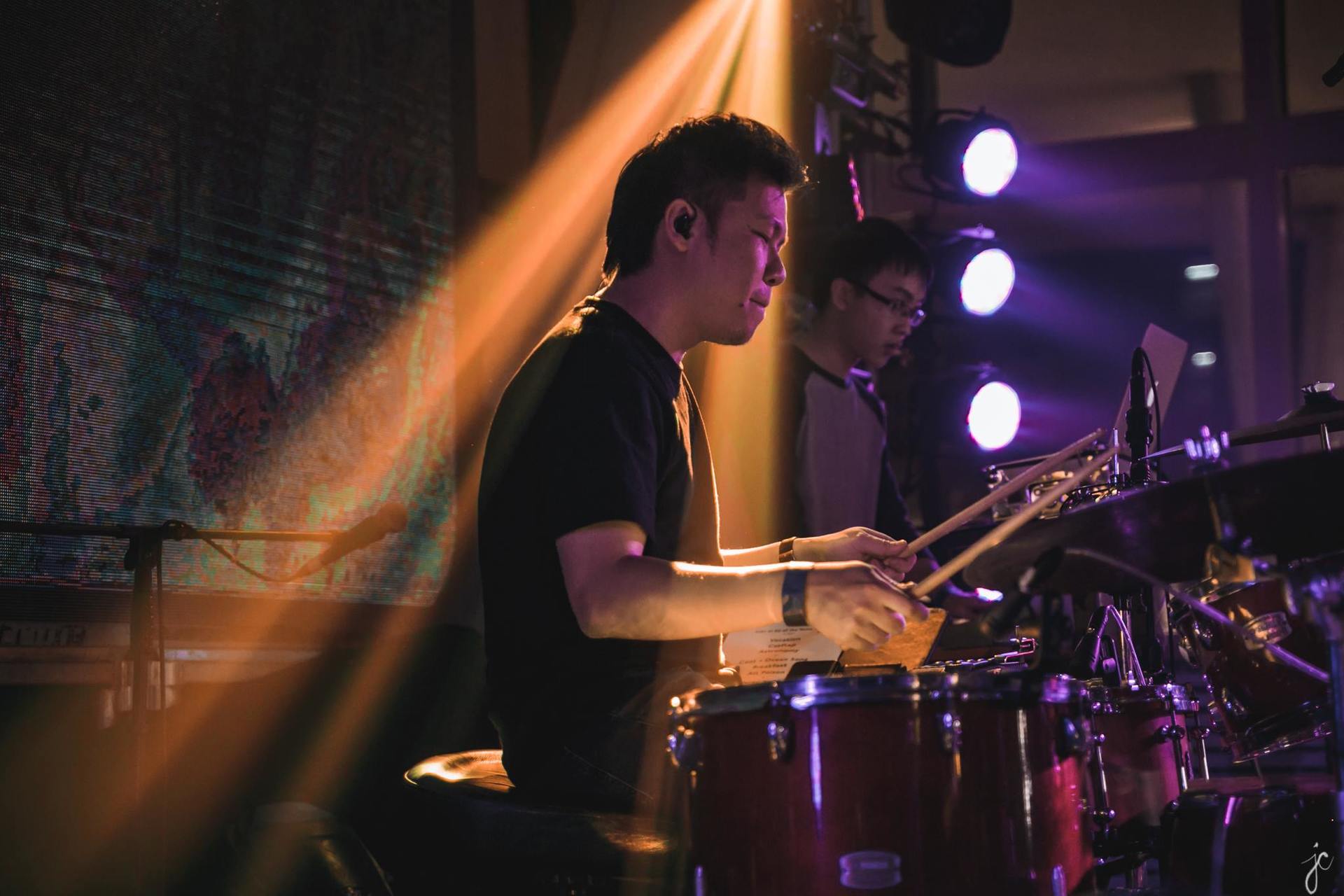 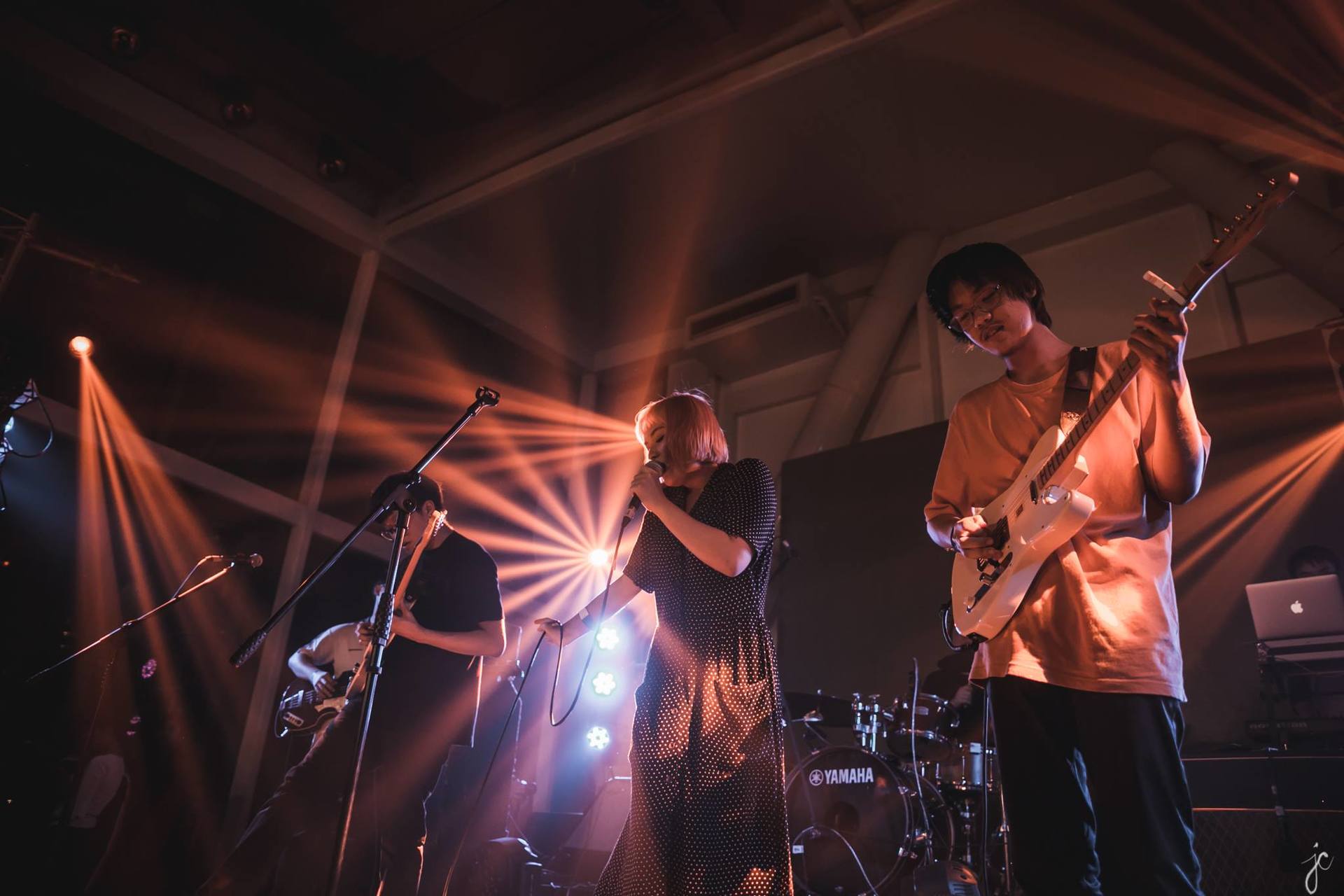 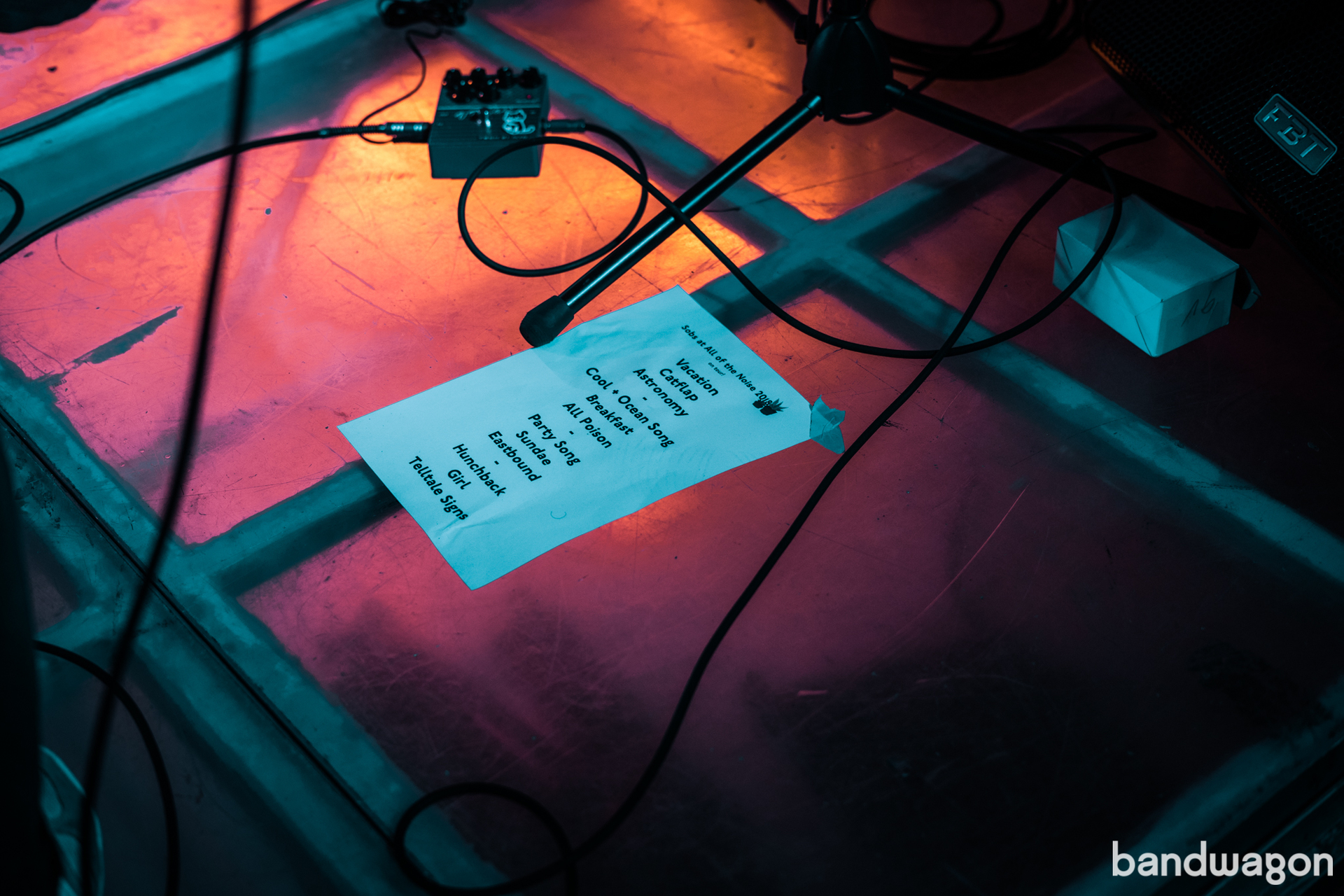 The band treated fans to a 12-track setlist with songs from their first full-length release, Telltale Signs, and 2017 EP, Catflap.

Sobs's debut album, Telltale Signs, is available on cassette via United Cassettes PH. Get them here.